I feel like a broken record starting my entry this way again, but it did rain some overnight. It wasn’t bad and I still got more sleep than I would have gotten in the shelter with five other people. I went to sleep early last night before finishing blogging because I kept dozing off. I knew I would wake up refreshed in the middle of the night, and that is exactly what happened. I woke up wide awake around 2:30am and did the blog for about an hour and then I went back to sleep. That seems to be happening a lot that if I’m too tired to write I just go to sleep early and then I find myself wide awake in the middle of the night, so then I can do the entry and go back to sleep. Hey, whatever works. I ended up quite awake and ready to hike well before 7am, which was when I had agreed to hike out with Mike. I figured I could pack up and then head up the hill a bit and post the blog where I knew I would probably get service just half a mile from camp. Ross and Barb were also ready early so I told them all I’d just be up trail posting the blog and we all ended up together by mid morning.

I hiked the first half of the day mainly with Barb, Ross, and Mike. It was a nice change of pace to chat with people for the morning and get to know them. It was quite a gorgeous day today. I took many photos the first half of the day, but near lunch Mike (trail name Hui), let me know that he would prefer to not be photographed and posted on the blog. That is understandable and I’ve had others request the same thing when they are personal people. It does make sense for people who don’t know the person blogging that they would not fully feel comfortable possibly with what may or may not get posted. I wanted to mention it, because I still wanted to use many of the photos he was in this morning, so I needed to be a little creative with the editing. I think you all will enjoy it… 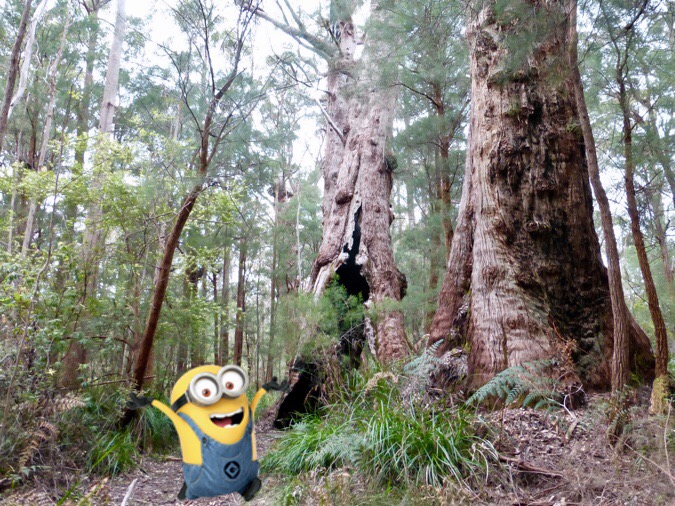 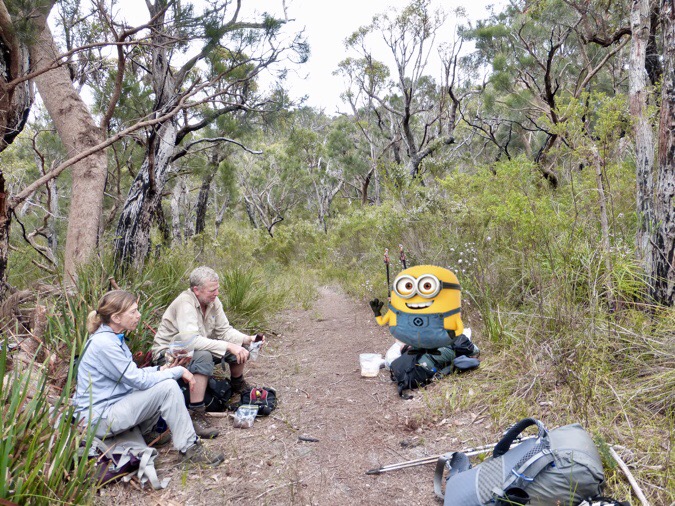 Morning break with Barb and Ross.

I have my days mapped out for lower miles the rest of the hike, but tomorrow and the next day will have some rain showers, so I decided to do more today so I could do less tomorrow when the weather isn’t great. 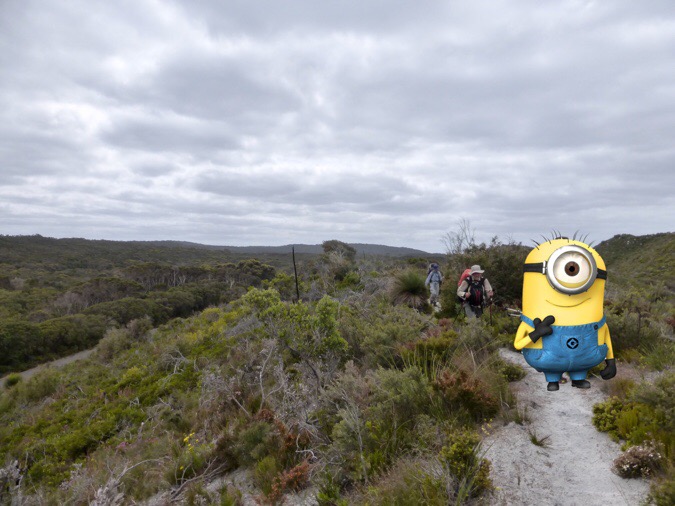 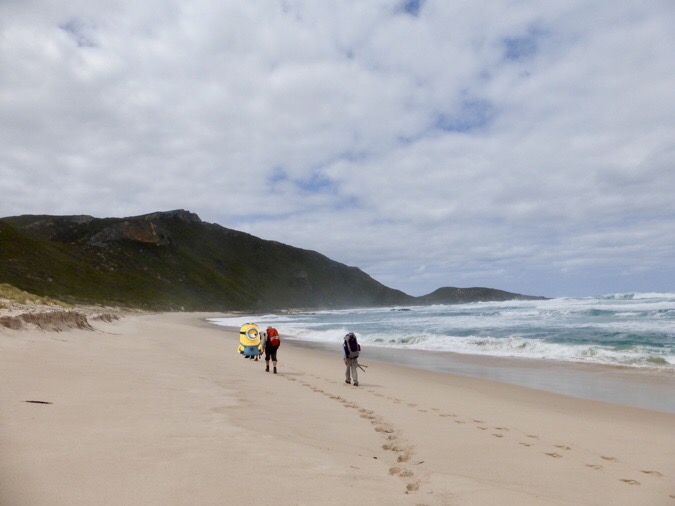 A stretch on the beach.

We all had lunch at the Rame Head Shelter, which was very nicely situated to have coastal views. We could see the rest of our day ahead of us. The track would go along the coast and then it would curve around into Peaceful Bay.

Hard to see, but looking ahead at coast line and Peaceful Bay.

With the great weather and inspiring scenery, I was really antsy to stretch my legs and just go. I said bye to everyone after lunch and headed out so that I could get my resupply box I had sent to Peaceful Bay Caravan Park. The other hikers were going to camp there or somewhere very close to there. I figured I would hike on until near dark with the great weather.

The hike coming into Peaceful Bay was wonderful. I felt like I was soaring with the scenery. The temperatures were perfect, and there was little wind. The waves were coming in more powerful than I’ve ever seen in my life. It was quite impressive to watch as they powered onto the shore and into the rocks spraying high in the air. Of course, photos don’t do it justice. 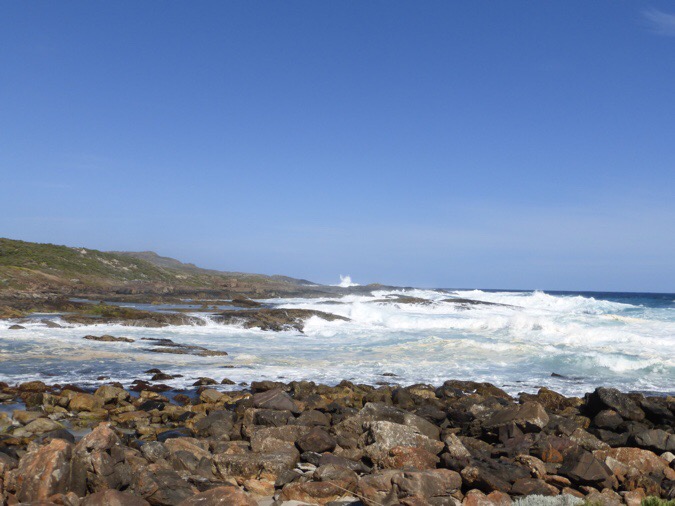 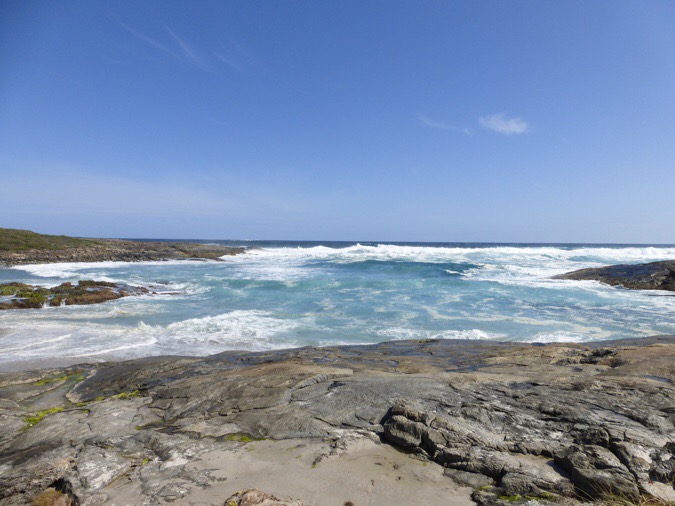 Later, as I was turning a corner, there was a side trail to a lookout. I chose not to take it because I had been seeing the same views all day and thought that I had seen what would be over there. A bit later, I checked the guidebook and it mentioned that spot had seals. I missed seeing seals! I kicked myself for not looking at the book sooner. There are many people who hike out here without the guidebook at all, it is quite wordy and detailed, which is great, but there are times that I just want to experience where I’m at and not be interrupted by reading every five minutes. The markers are usually so clear that they can be followed without the guidebook. I’ve enjoyed having it, but there are times that I just let it go so that I can be present and take it all in. 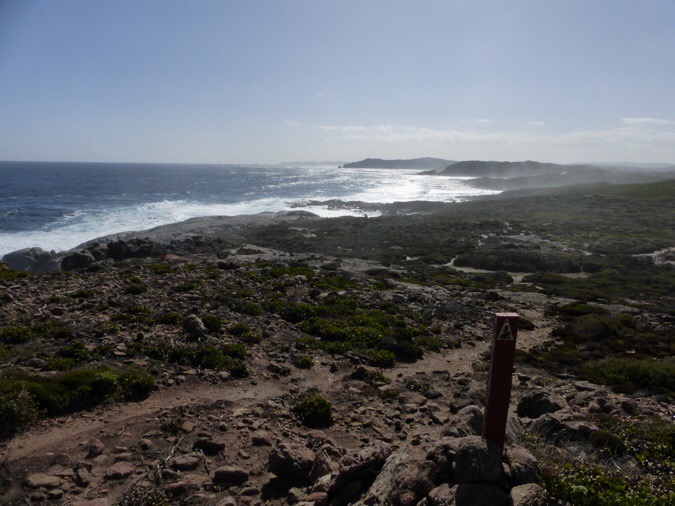 Looking back on where I came from. 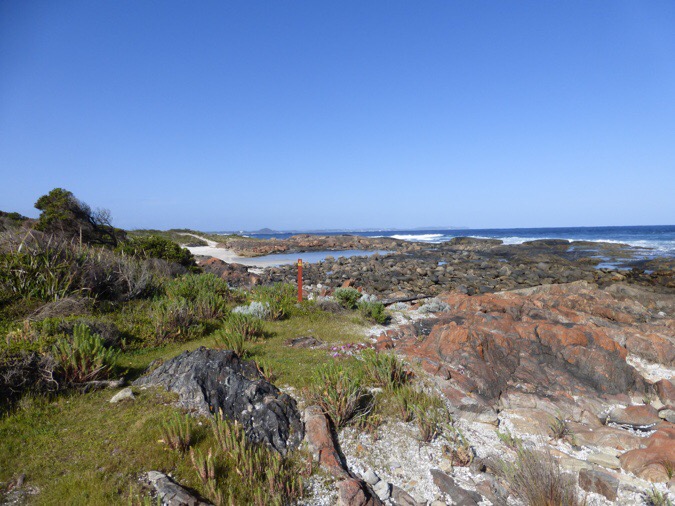 A kangaroo on the coast. So surreal! 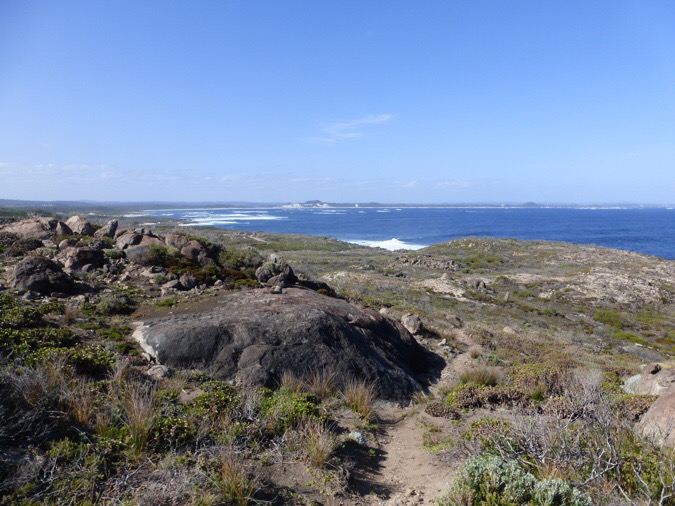 When I got close to Peaceful Bay, there was a couple walking along the beach. When I got closer to them, I was surprised to find out that it was the same couple (Jan and Rory) I met at dinner when I was in Walpole two nights ago. 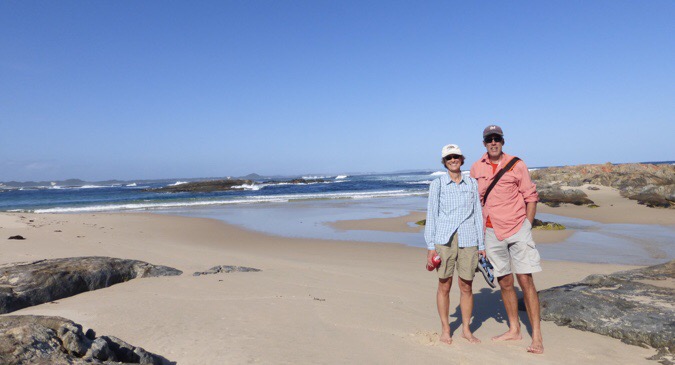 Jan and Rory are from Alaska, and are biking along the coast here. I knew they were headed this way, but the chances of us intersecting like this was quite rare. It was fun to see them. When I met them the other night in Walpole, I managed to not take a photo that night at dinner like I usually do. I think I was tired and got lax with photos that day. I always like to take photos because you never know who might pop up again. Of course, the one time I don’t take a photo, and I see them again two days later. They will be in my next town at the same time as me as well. Fun coincidence.

I stopped in Peaceful Bay to get my resupply box and throw it all in my pack. By the time I left Peaceful Bay, it was 4:50pm. I usually try to stop around 5:30-6pm, but I was willing to go later today until I found a good camp spot. I was hoping to find something with a coastal view because the track is paralleling the coast, but was out of luck. The wide track was obstructed and quite brushy on both sides, so I was not able to see the ocean unless I peeked over the brush, but I could hear it! At 6:10pm, I found a good spot tucked in a forest just 1km away from Irwin Inlet. 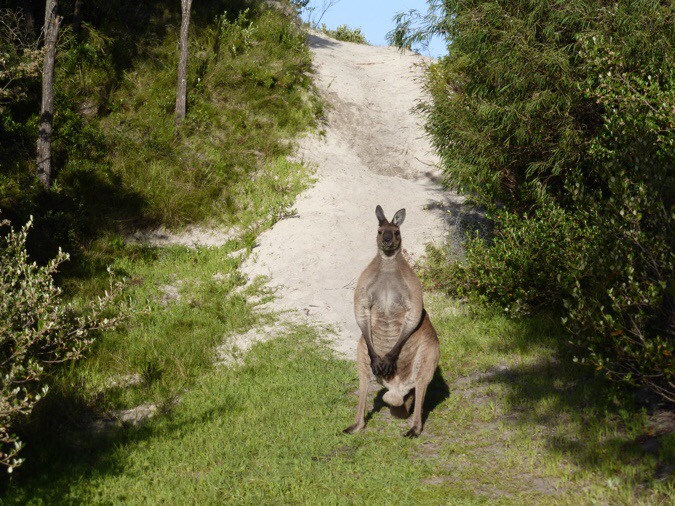 I had a standoff with this dude for a couple minutes. He looked tough!

There are many inlets coming up in the next few days and all are different as far as if they are passable or will require something different to get across. For example, the Irwin Inlet, which I’ll do tomorrow morning, has canoes sitting on shore for people to use to cross the 200m inlet. I’ll explain more on this tomorrow, but here is a great shot of the inlet this evening before I dropped down to the forest. 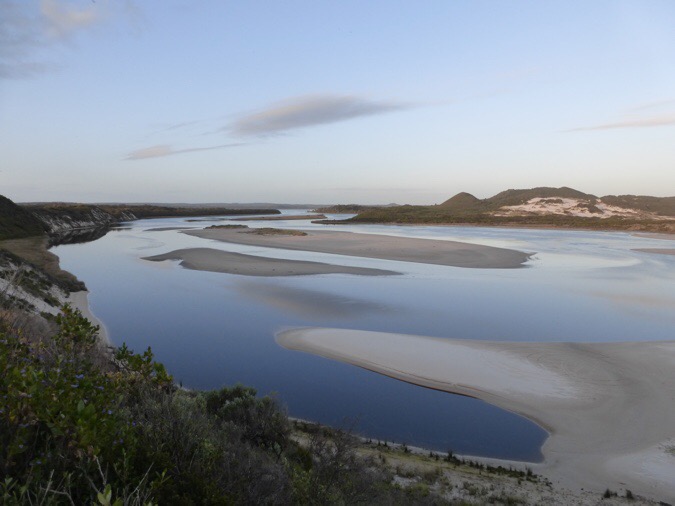 Well, once again I’m struggling to stay awake, so I’ll stop there for tonight. Excited about the canoe tomorrow morning! 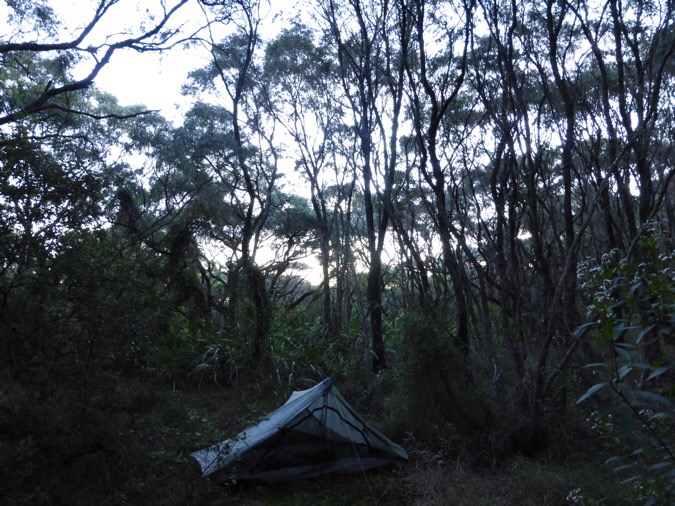