It was a cozy night at the Parry Inlet Campground. I slept really well there and was thankful to be in a sheltered place where I could hear the wind gusts, but our site was well protected among trees. There was a bit of rain around 5am, but it cleared up by the time Dave and I headed out at 6:30am. We immediately walked onto Mazzoletti Beach to what is known as one of the most taxing coastal stretches. Mazzoletti Beach is 4mi/7km of usually varied deep sand walking. 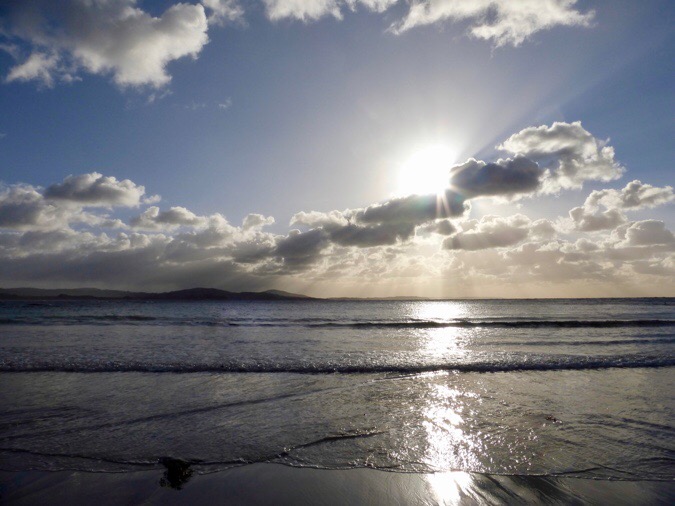 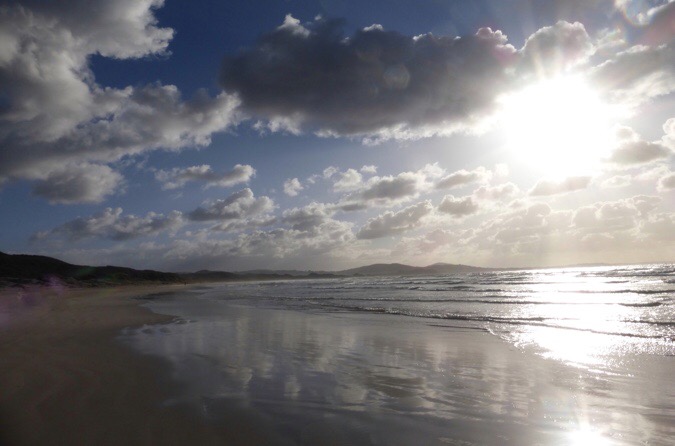 We lucked out big time apparently because it was some of the fastest walking I’ve had all hike. It was mid tide, so we were able to be on the more packed down and level part right where the waves were coming in. Additionally, with all the rain, I think the sand that normally would be deep and soft when we were forced to hike higher was also quite firm. We flew through it and it was a great morning to have the longest stretch of beach walking. 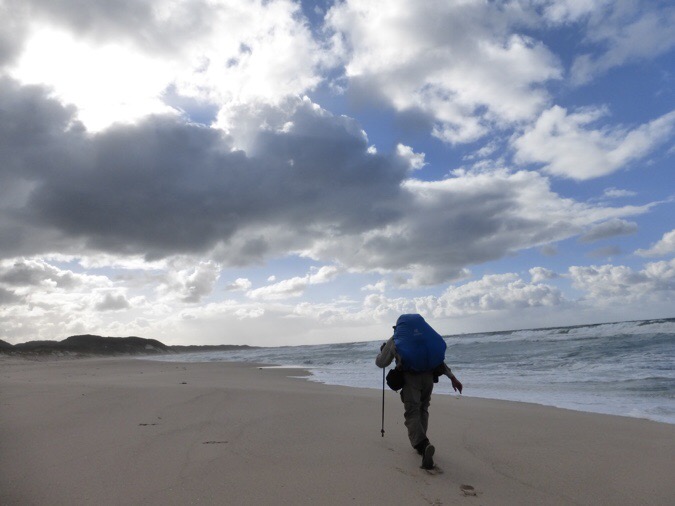 Soon after that, we hit William Bay Shelter for a brief break. Today was beautiful, but still quite cool out with temps still unseasonably cooler in the mid 50s/12.7C. There is a side trip some do to Elephant Rocks, which I’ve seen photos of and is a cove with a lot of large rounded rocks in the ocean where people swim. I was told to head down there, but really didn’t feel the need and knew swimming wasn’t happening, so we decided to pass on going down there. The latter part of the morning had sandy trail walking with nice coastal views and dropped down briefly a couple times to the water. Tons of great photos to be taken. 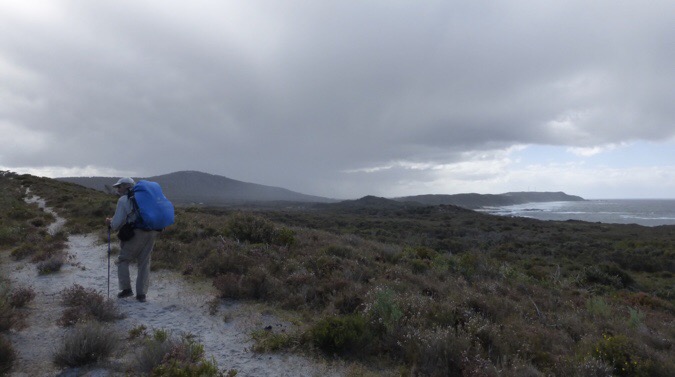 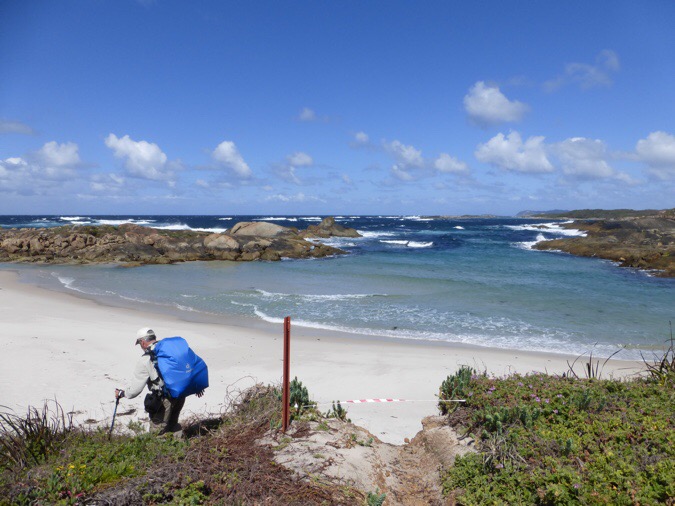 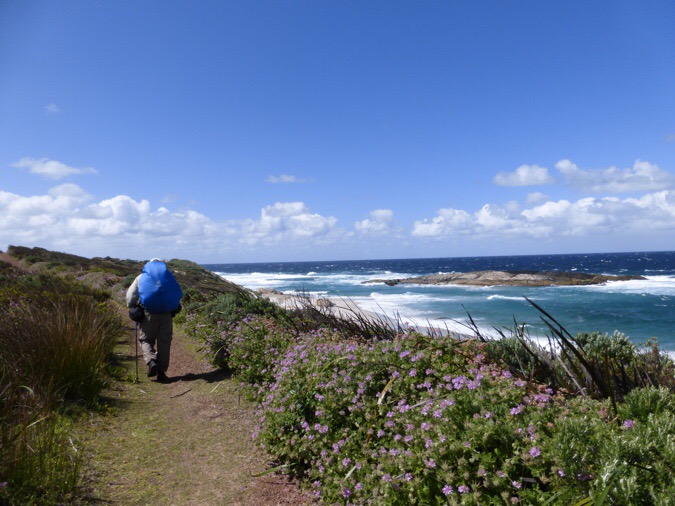 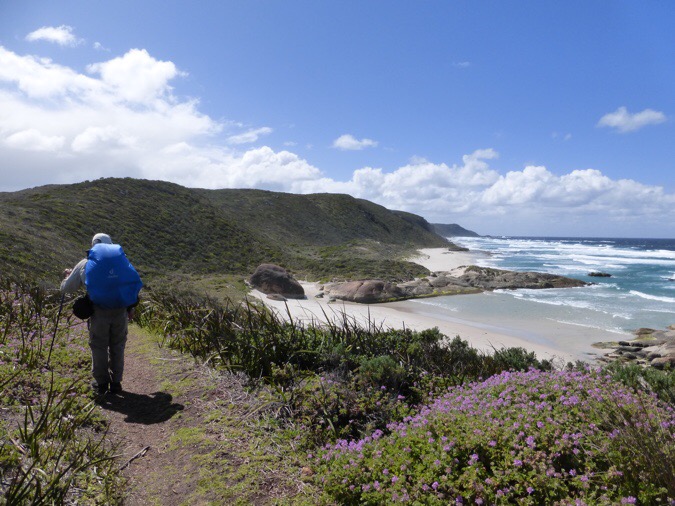 Then we headed inland and up Mt Hallowell. It was a decent climb that was steep and rocky towards the top reminding me of the Appalachian Trail. 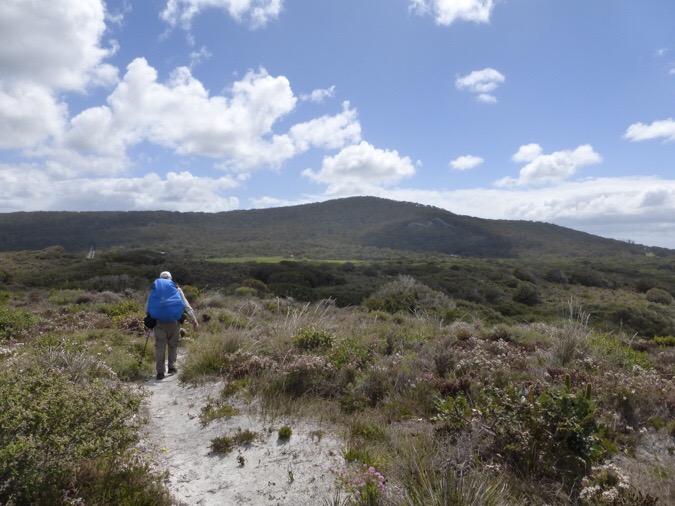 We had lunch up top and had a view of our path ahead down to the town of Denmark along Wilson Inlet. In the photo, the large body of water on the left is Wilson Inlet. Since the sand bar on the right is not crossable this time of year, hikers get a shuttle around to the other side either by boat or car. The cheaper option is the car shuttle so Dave and I are splitting the $40 shuttle we hired for tomorrow morning. 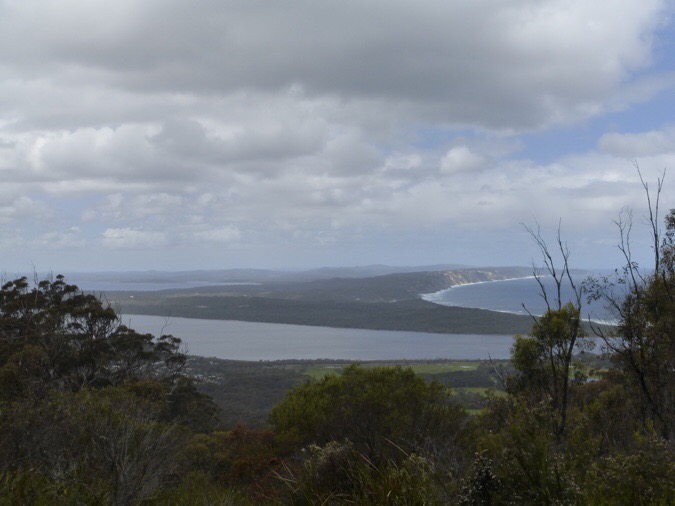 Looking down on Wilson Inlet. 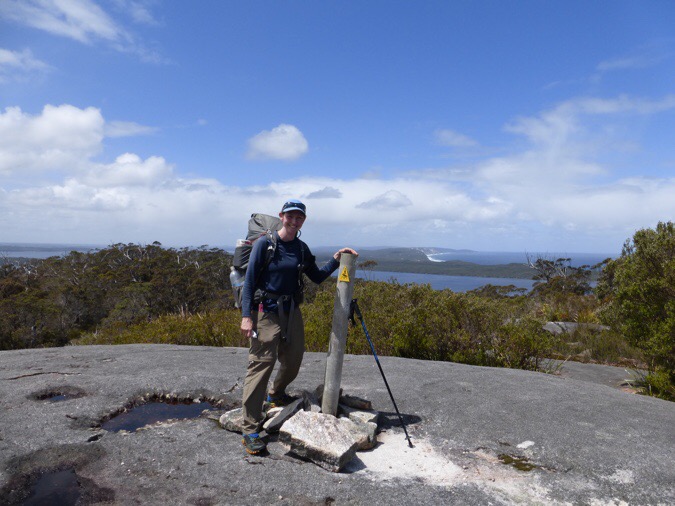 Dave and I have a very similar hiking pace, so it is working out very naturally to hike together. Dave has lived quite the life with a lot of travel through his work. He has recently retired from working with oil industries all over the world. Even more interestingly, for over 20yrs, he was with the Australian Army under the Special Air Service Regiment. According to Wikipedia, “SASR is primarily structured to conduct covert long-range reconnaissance and surveillance in small teams in enemy-controlled territory.” It is an elite sector of badassery. Dave was one of those dudes you see in movies that secretly parachute or rappel into a territory at night (often in crazy difficult terrain and bush) with just a few others and do that crazy recon spy kinda stuff in the middle of nowhere. You have to be the best of the best to even qualify to possibly do such a thing. I’ve gotten to hear a few stories and it’s pretty entertaining.


This explains Dave’s relatively fast pace, work ethic, and discipline to hike all day. Coming into camp last night after hiking a tough day that ended in a couple hours of steady cold rain didn’t even phase him. You’d think he was standing in sunshine with how he was chatting with me in the rain at camp when he arrived. I thought the Bib would bore him with all he’s done, but it’s just the relaxing and therapeutic environment he craves. It definitely reminds me of the many veterans out on the US trails and how much walking the trails does for people.

The hike down Mt Hallowell was also rocky, but we made good time and dropped into the outskirts of Denmark with really cool nice homes. There were some views of Wilson Inlet as we walked along it, but it was mostly just a wide dirt track. There was some light rain for a bit but nothing that stayed for long. 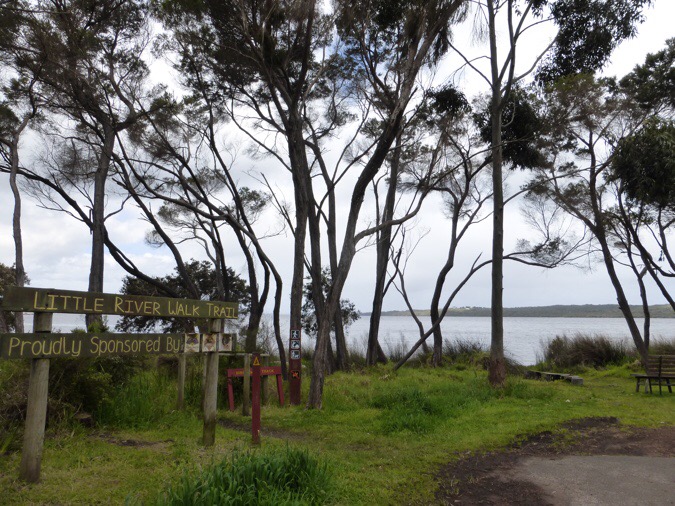 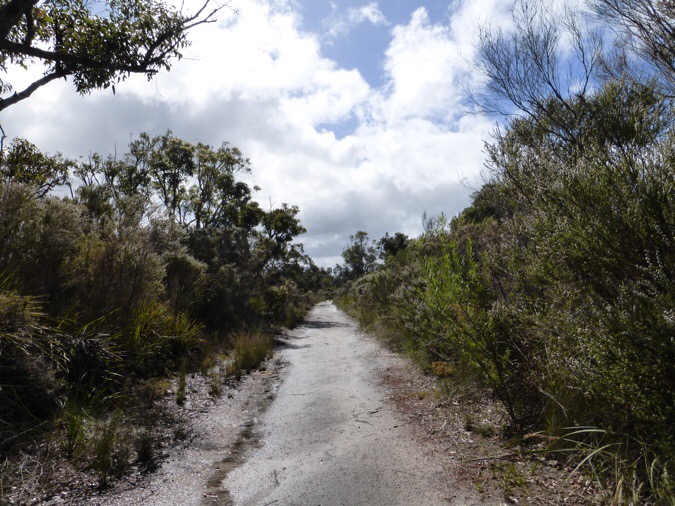 The trail walks right up to the Caravan Park where we decided to camp rather than going into town to the hostel. There are so many towns and opportunities to stop along this trail. We were just in Walpole the other day and will be in Albany in 2.5 more days, so I really felt no need to do the extra 15min walk into town. 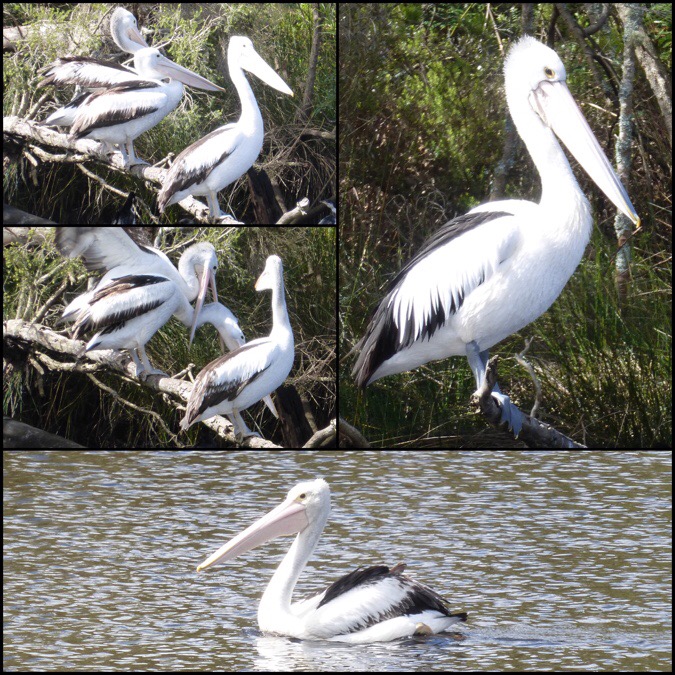 Entertaining pelicans near the Caravan Park.

We arrived at 2:40pm and got to relax the rest of the day. Having not taken a zero day in almost a month, my body is greatly welcoming these last two days of stopping early. It was $15 each to get a spot at the front of the Caravan Park next to the playground rather than a more expensive spot back in the actual camping area. 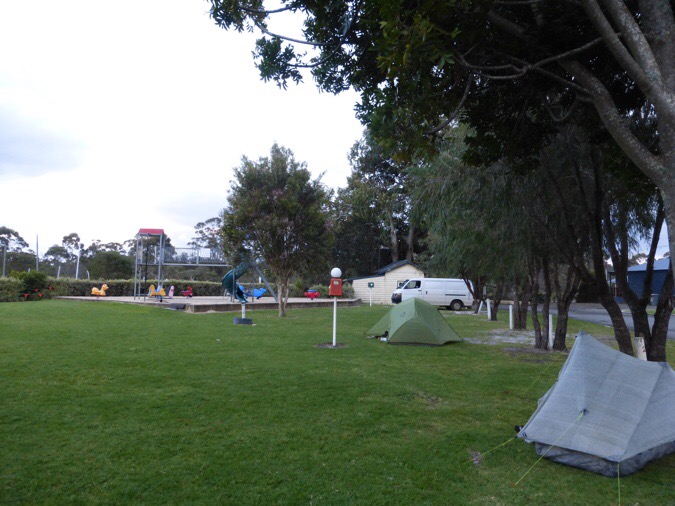 It is tough to pay for camping, but there are facilities here and I was able to get a shower and charge everything up. Dave was excited to save money splitting the shuttle with me, so he ordered dinner in and it was delivered to the Caravan Park. I got to have a grilled chicken and chips (fries) and it was great. 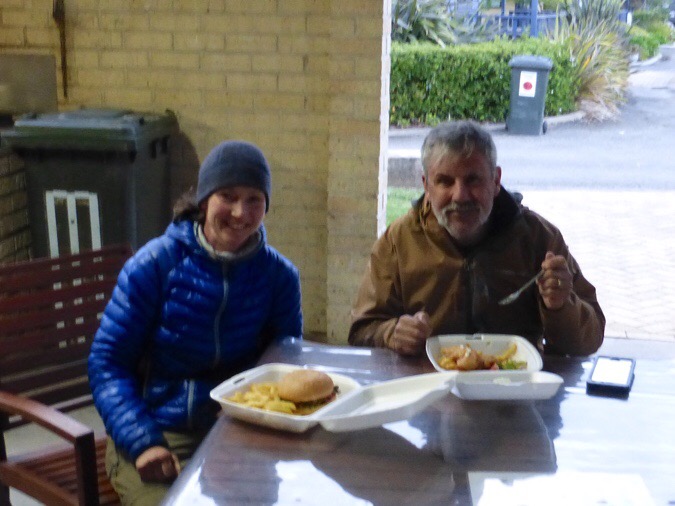 I got to end the night watching last week’s Grey’s Anatomy. Yup, my kind of day!