Day 27: Just The Ending I Hoped For

As expected, the birds were up before the sun rose and there was quite the natural alarm clock at 4:30am. I unsuccessfully tried to sleep through it. Earplugs don’t work and I’m going to work on finding some even better ones. Today was the day that we needed the ride around the Wilson Inlet. We arranged for a 7am pickup from Jacko, who has the best deal in town for $40 total. He can be reached through his B&B, Casa Libelula, and does many services along the track if you’re looking to cache food or do a car shuttle as well. Jacko did the Appalachian Trail in 2013 and wore his AT blaze shirt. I have a blue one of those shirts and it was fun to see it out here in Australia. 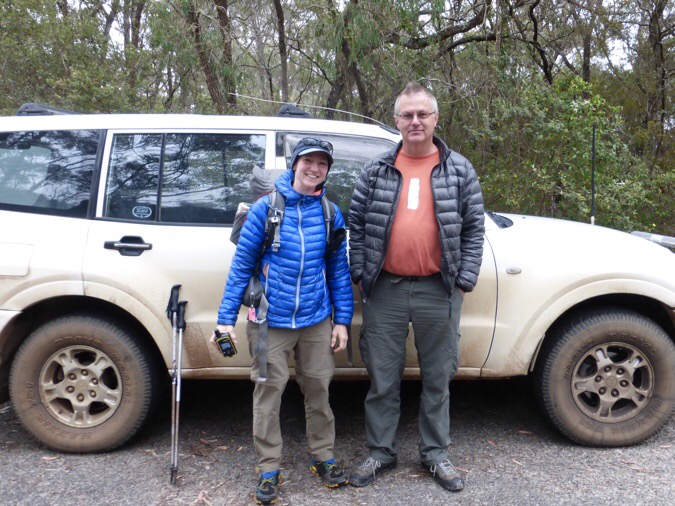 It was about a 30min ride around the inlet, and we had Jacko drop us off at the dock where the original ferry would have taken us. It feels odd to get a ride, but the original route was a ferry across the inlet that no longer exists and closed about 10yrs ago. There are pricey options to cross the water, so most do the car shuttle. Yes, it can be walked, but it would be about a day of walking and there isn’t a path made for it, so much of it would be road walking. It did feel odd to get a ride on a thru hike, but knowing it was intended to be a ferry, it seemed to make more sense. 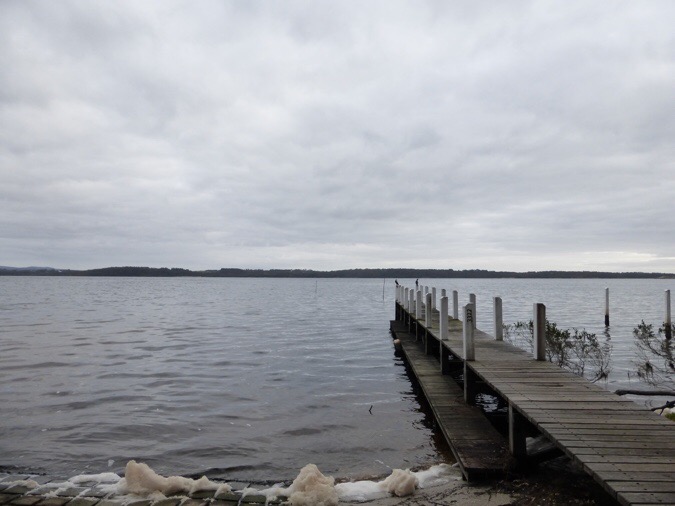 The first 8.5mi/14km to the first shelter today flew by! We were along the inlet for much of it, so it was a dirt trail and really flat. Since our bodies are used to sand and going up and down, we cruised it and were there in just over two hours. 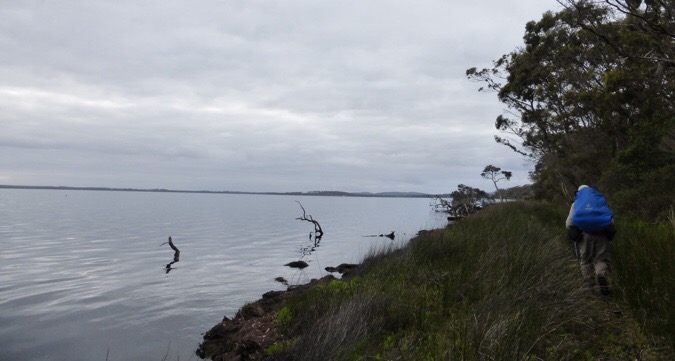 The rest of the day’s walking was in sand dunes, mostly removed from the views of the coast. It was much more obstructed than I expected, but there were many viewpoints at moments where there was a view looking back on the inlet or out to the coast. They have these great benches where one part is slightly raised behind the seat of the bench. It is there for backpackers to rest their pack and is a great idea! 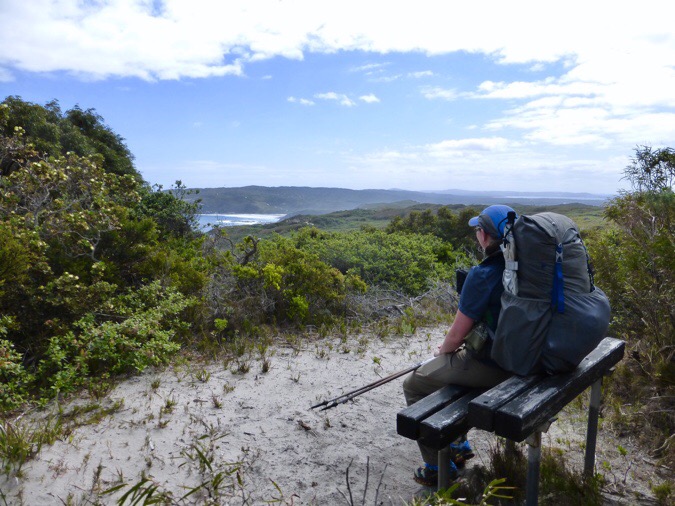 The day went by pretty fast and uneventfully except for some great animal sightings from Dave. He likes to be in front “snake patrol” and I am quite happy about that, but he gets the animal sightings and they tend to run off before I can see them. We saw countless snakes. At times, when I was up front, I’d see one just skirt away barely before I could even tell what it was. Dave killed a small dugite that is venemous. It was funny because when I asked how to spell it, Dave’s army self speedily said ” Delta, uniform, golf, India, tango echo.” Cracks me up. Dave saw two feral cats that were big and ran off before I could see them. They are a huge problem all along the track (and the whole country) killing many birds. There are a lot of signs along the trail about poisonous traps that are out in the bush. Apparently, they are quite large and all different colors. 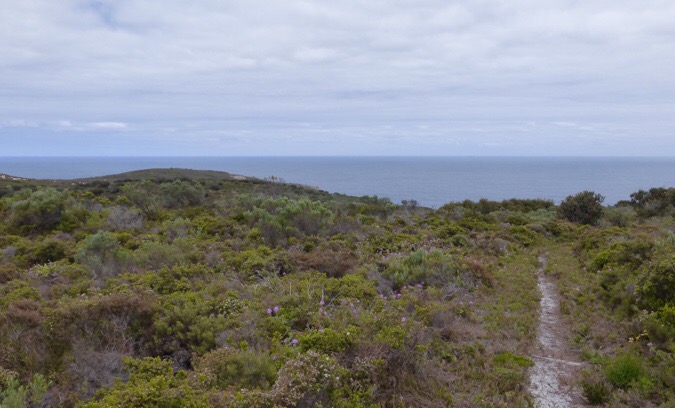 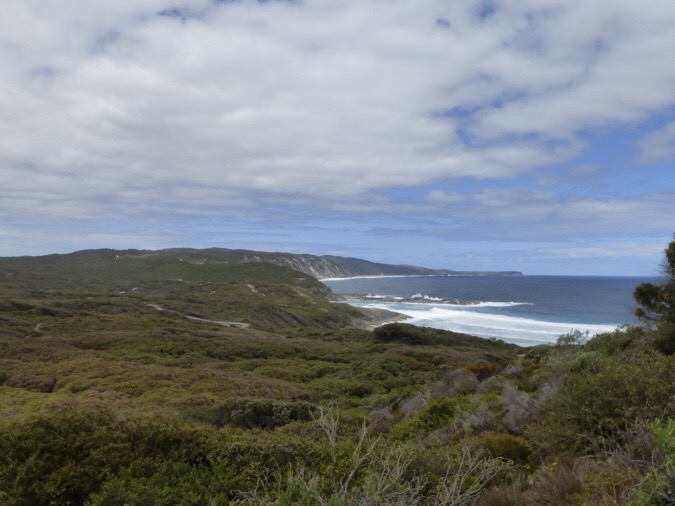 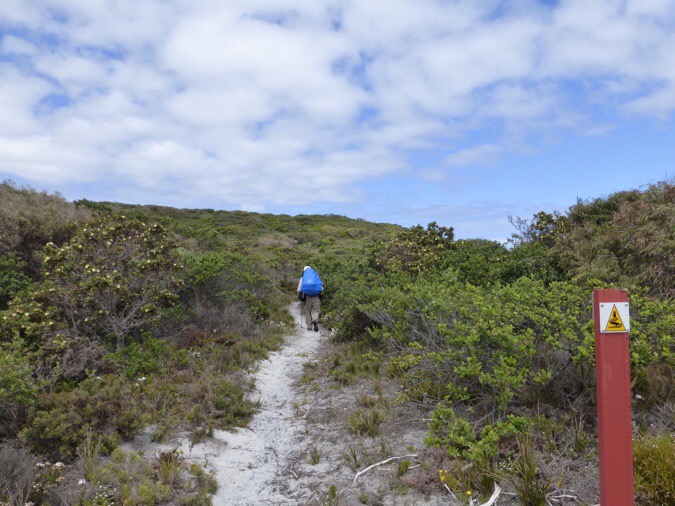 We got to West Cape Howe Shelter just before 3pm and there was a group of six women there out doing a section for the beautiful weekend. I’m actually surprised we didn’t see more out as this is the first beautiful weekend all trip. Tomorrow is Saturday, so maybe more tomorrow. We did see one other woman later doing a section that was hiking north to Denmark. Well, these women were a hoot and quite talkative. There was a lot of energy in that shelter. They call themselves the EMUS (Early Morning United Sisters) because they all walk together in the mornings in their hometown. 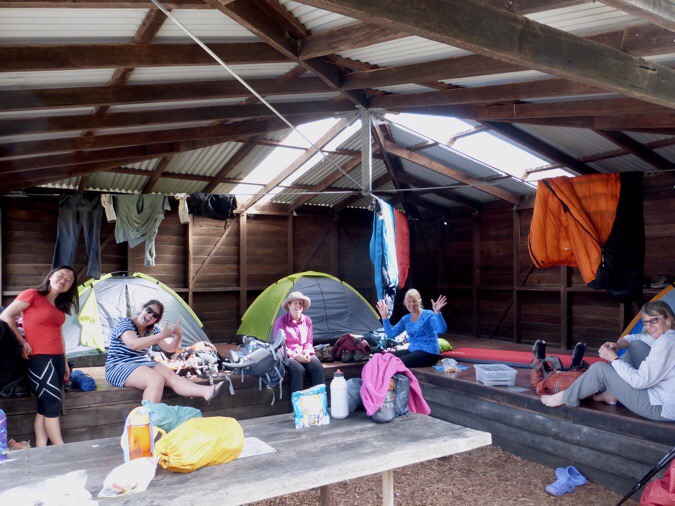 EMUS (Early Morning United Sisters) sans one that was resting. 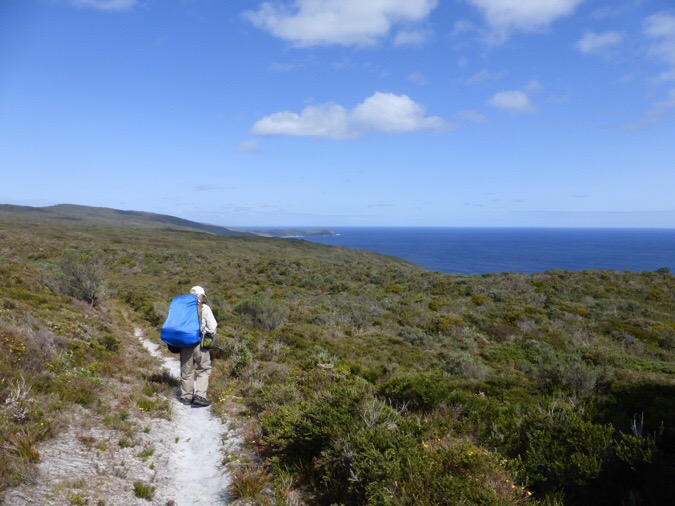 Once we were past the shelter, we were on bonus miles for the day. The plan was to go a couple hours til 5ish, but keep an eye out for rare clear and flat campable spots. We came to a nice view of the coast about 4:30pm that coincidentally was the T-junction with a defunct old track called the Lake William Track and it was the most perfect camping spot we could have found. We couldn’t pass up a sheltered spot with an ocean view to watch the sunset and took it. It was great! 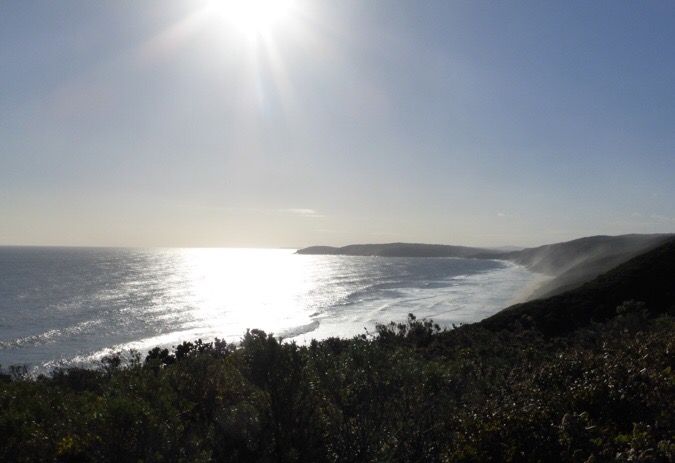 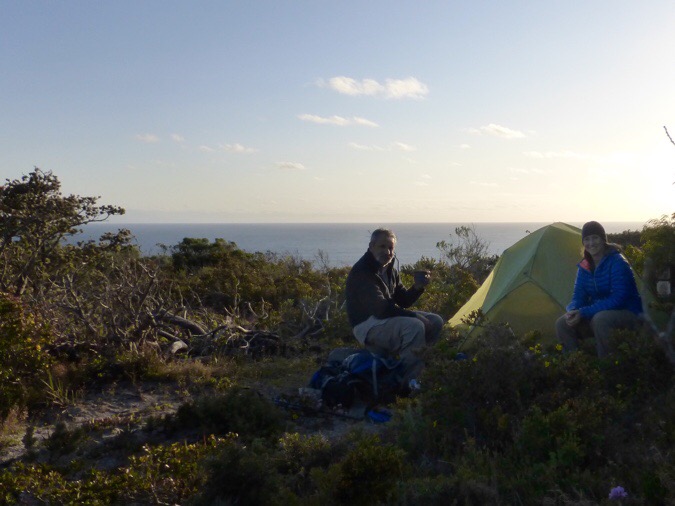 I’m getting pretty spoiled by these early stop times and this may become a habit. It still gets dark before 7pm here and I find my body wanting to sleep soon after. I went to sleep just after 8pm tonight. I definitely think I’m feeling the cumulative effects of hiking a decent pace for the last 27 days without taking a day off, so I am welcoming the early stopping and extra sleep. Each night I think I’ll surely watch a show, but I’m ready to sleep by the time I finish journaling. 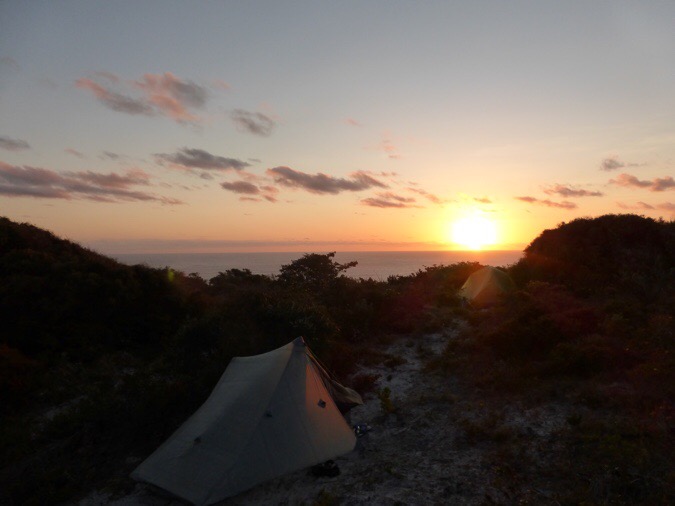 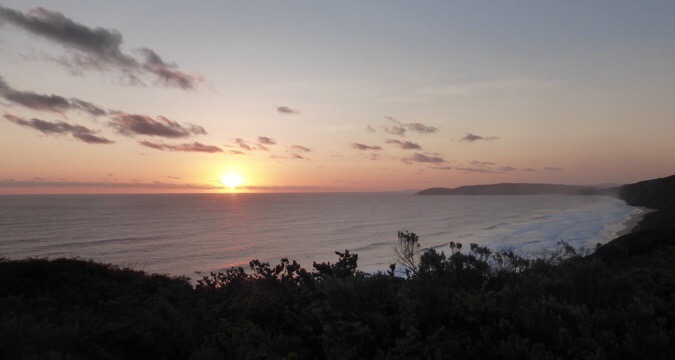 The sunset was awesome!

Well, tomorrow is the last full day of hiking and then we will have a short morning hike out the last day. Weather is clear and pretty perfect. So glad to get a good ending on the coast!