Last night was very calm with one rain shower, but I was snug in my little home under the trees. I got going at 6:40am and kicked off the day with 9mi/15km of mostly wooded 4WD road. It was quite pleasant and it was nice to have some multitasking trail and have some phone service to catch up on a few things. It reminded me fondly of the Bibbulmun. 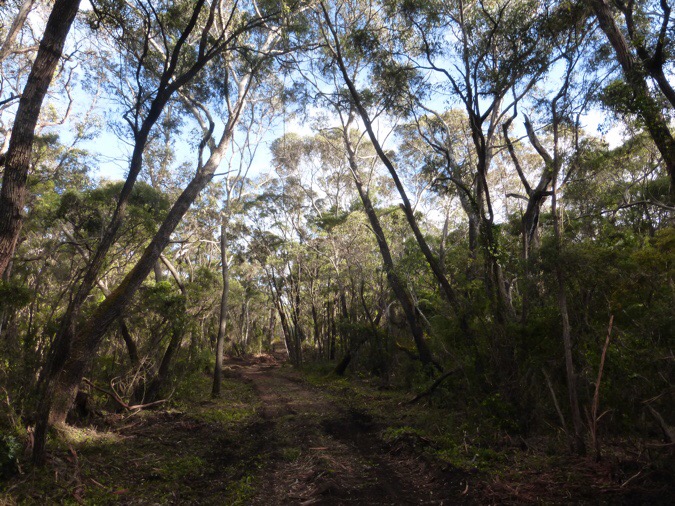 I ran into many people today (hikers and tourists) and none were going northbound like me. I’m not sure why, but the guidebook is written for southbound hikers. There are some directions for northbounders on the tricky spots. Most hikers don’t seem to use the guidebook and mainly rely on the foldout maps since it is pretty simple and the trail is fairly well marked at intersections. Similar to the Bib, the C2C has a tourism aspect to it. There are a few small towns along the way, many access points allowing for day hikes, many camping opportunities, and options for guided trips with guides. All but two of the 30+ people I came across today, hiking the C2C, were doing a traditional thru hike carrying all their gear. The rest were day hiking either solo or in a good sized group with a guide and then camping or sleeping in accommodations in town each night. 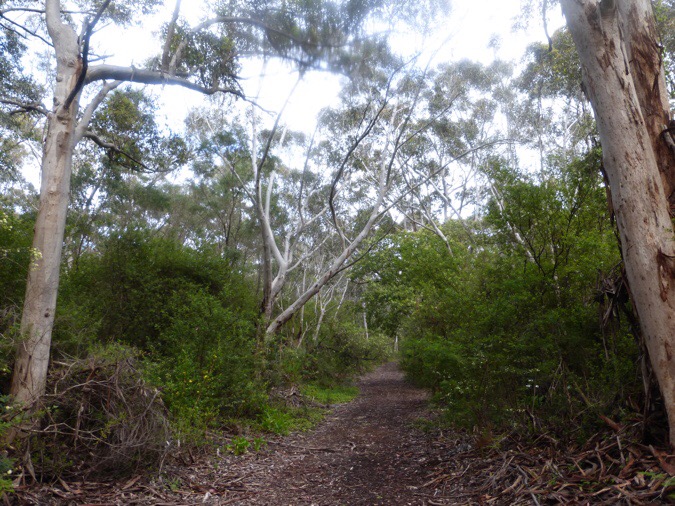 There is often a look of surprise or amazement that someone would be hiking and carrying their own gear and camping out each night. Add to it that I have yet to camp in any of the designated campsites, and people are really stunned. On both the Bibbulmun and Cape to Cape hikes, most people have similar strategies. Find out where the campsites and water sources are, and camp there. I understand the strategy and comfort in that, but my personal approach tends to be that I’ll guesstimate how far I might be able to go given the terrain. Then I’ll see where that lands me and what camping may be near there. It adds an element of adventure to the day to have that unknown of where exactly I’ll be camping, and I really like that. I’ve done this enough that I can usually find a spot within a mile or two once I decide to start looking. Water carries generally aren’t a concern, as I don’t mind carrying what I’d need to cook with. I’ve scored big time on this hike with timing and campsites and I am feeling really fortunate to have so much fall into place. 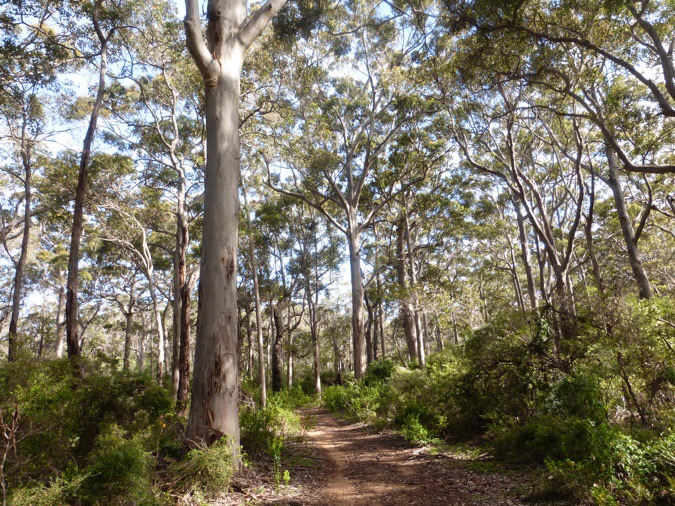 After the wooded hiking this morning, the track headed back to the coast and up along some cliffs for awhile. The views were great! I’m not sure if this is normal here, but the waves today were huge and they were forming quite far out. It was cool to see it from above for awhile and watch them all rolling in. I have kept an eye out for whales, but it seems this may be just after the season to see them. 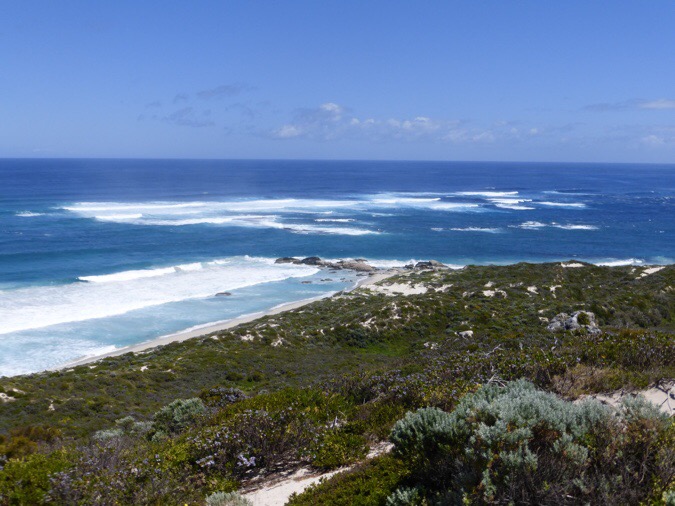 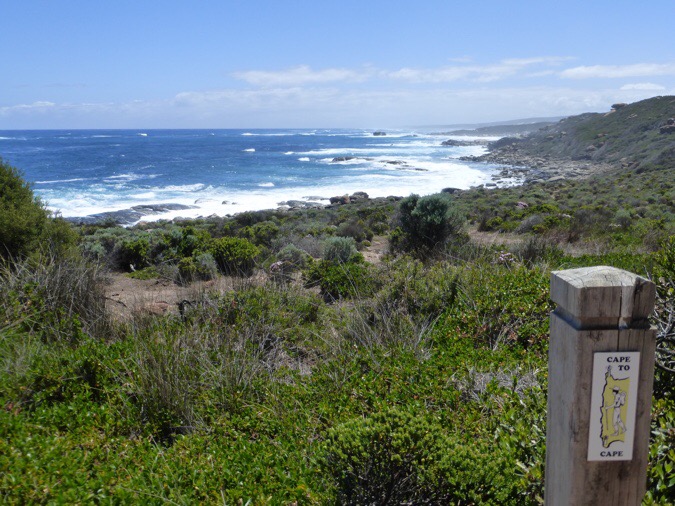 After some clifftop walking, the trail went down to the beach at a spot called Bob’s Hollow. There were massive waves and the water was crashing up on the rocks out at sea. It was quite impressive. Near there, I had lunch up on some rocks and watched the waves roll in. It was a great lunch spot! 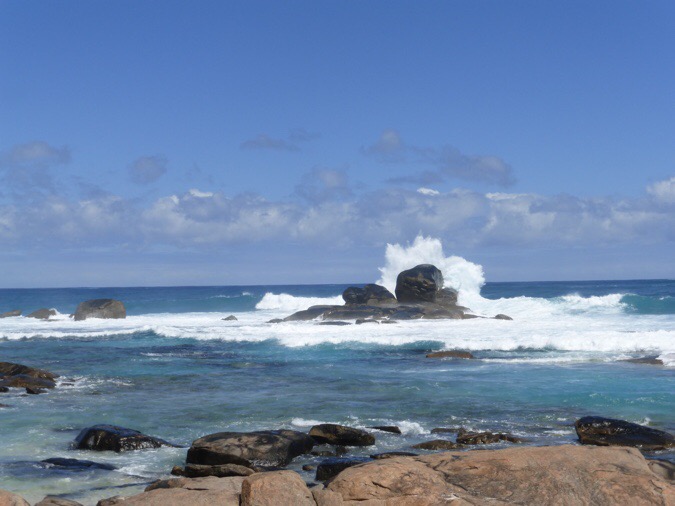 A little distorted, but good visual on the view.

After lunch, I had about an hour of deep sandy beach walking and got to watch more of the waves rolling in. I don’t think this is common. Today someone said there was a big swell, so maybe that’s what I was seeing. I heard I might have seen surfers today, but I’m guessing these waves aren’t ideal. 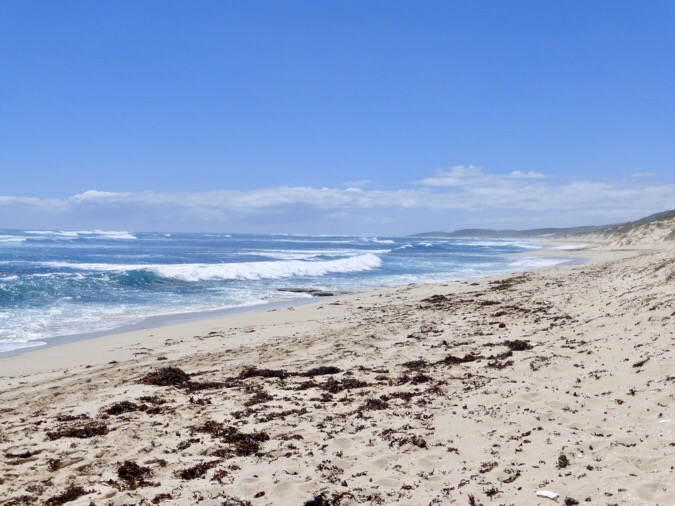 At the end of the day, I was landing near the mouth of the Margaret River. In early season, this can be a difficult crossing and there is a 5km diversion if the sand bar is not there to cross safely because the water is too high. I had assumed it would be fine until a woman mentioned this morning that it is closed and most hikers are taking the diversion. She said it was waist high. I still had hope it was crossable, so I asked everyone I met hiking towards me. One guy (Kent?) told me he did it at low tide yesterday and it was knee high and not a problem. Thanks to him, I had hope and I ignored all the naysayers I met all day. There was even a guided group that took a canoe across yesterday. I just had to see it for myself. Knowing how different water levels can be from day to day, I felt that I had a chance. It was much dryer today and I was hitting it just a bit after low tide. If it wasn’t crossable, the diversion wasn’t far back to take. I kept a steady pace knowing that each minute later was another minute after low tide and that the window of opportunity was closing. 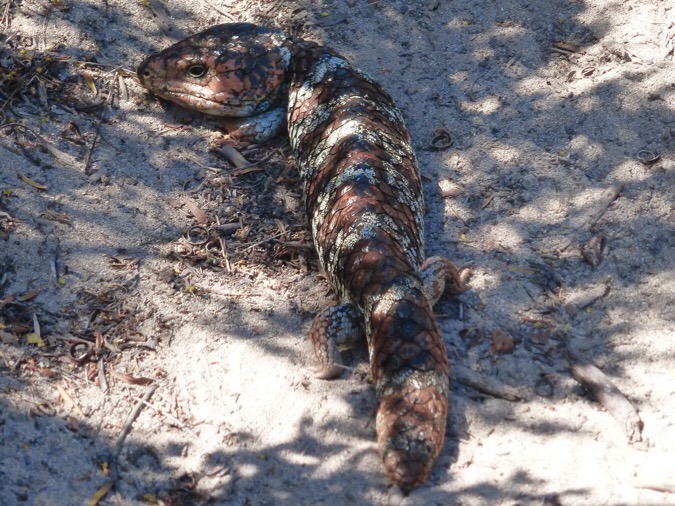 Bobtail lizard. Not sure which kind. Scared the crap out of me right in the middle of the trail camouflaged in the shade.

The afternoon had some sandy trail walking that wound back off the coast. There was a cool spot with a bridge that would have been really good for camping. It had a storybook feel to it in many ways and had a picturesque camping space on the other side of the bridge. 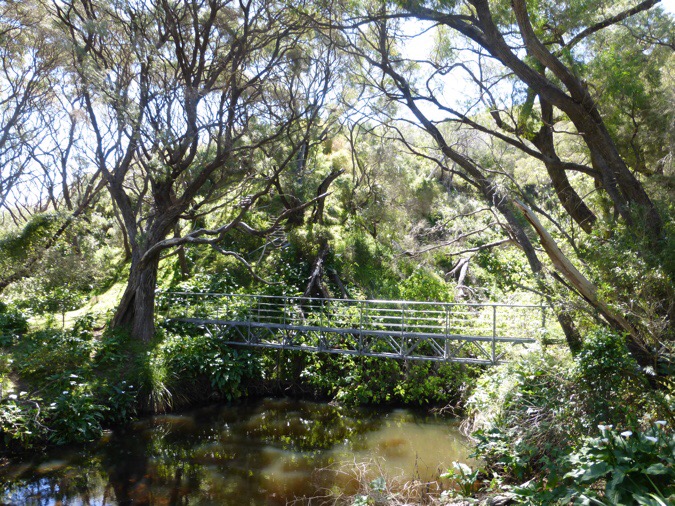 I still needed to get water before I got to the river. I think I could have found a way to fill up at the river, but I wasn’t sure how far up river the ocean water went at the mouth. The guidebook description and maps showed a water tank as a landmark right next to an electric tower. I figured that wouldn’t be hard to miss, but when I got there, there wasn’t a tank. I spent what felt like an hour rereading the guidebook, walking around, backtracking, and going forward. Then I decided to call the town caravan park that I was near and ask them where it was. They didn’t know and it looked like I was going to have to make a detour into town (where apparently many hikers camp) to get water. I called Dave and he said he had gotten water in town as well. He later messaged me that he found the tanks on GoogleEarth and they were within the fenced in no trespassing area. Apparently, the guidebook was using them as a landmark and not as an actual source and I somehow misread that, ugh. It was even marked on the map like all the other water tanks. Nothing said it was accessible and nothing said it wasn’t accessible. I just assumed it was and didn’t notice that, although it was a landmark on the data sheet, it wasn’t an actual water source. That’s very misleading and frustrating.

Still, knowing time was of the essence due to the Margaret River crossing, I hiked on to where the trail met the main road into town. I’d either need to walk in or hitch. Then a miracle happened. Right at the point where the trail hit the road, two big vans pulled over at a lookout over the Margaret River. I did what all thru hikers hate to do and asked if they had any spare water. It’s pretty embarrassing to ask for water and is a point of pride for any self-respecting thru-hiker to be self-sufficient. I knew I could have gone into town, but I needed the quickest option so I could get to the crossing as soon as possible. The nice people were able to give me the 3L I needed for cooking tonight and into the morning tomorrow until I got to the next source. I later was told there was probably water in the bathroom at the river mouth carpark. That wasn’t mentioned in the guidebook either. 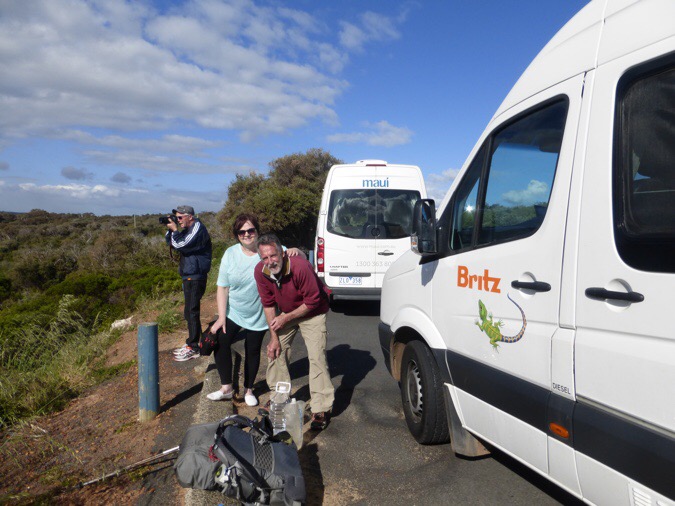 I hustled down to the crossing to find it so low that even toddlers were playing in it, ha! It ended up only being shin deep. Once again, my theory of walking up to see things for myself worked out. I’m sure yesterday with all the rain or at higher tide it would have been worse. 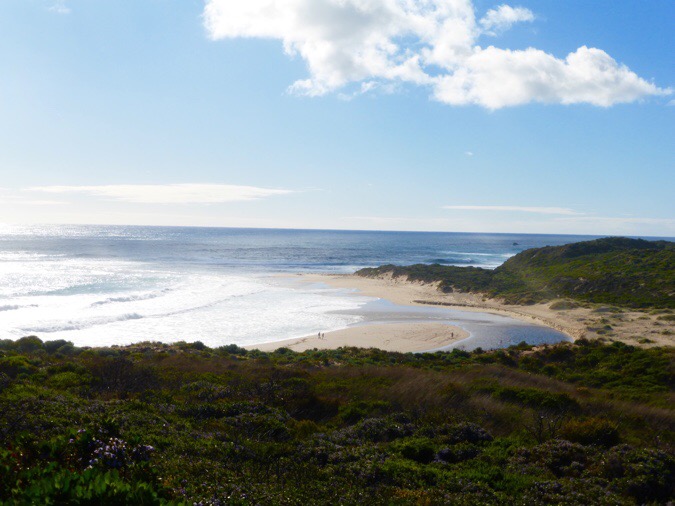 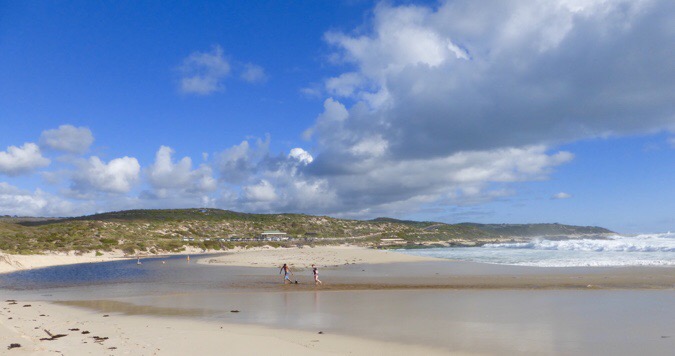 I had completed a bit more than my needed mileage for the day and looked for camping immediately. As luck would have it, there was a spot perfectly next to the trail just over the dune next to the crossing. I set up nice and early at 4:45pm. It is perfect and really well protected with no wind at all so far. I just barely fit in the spot. 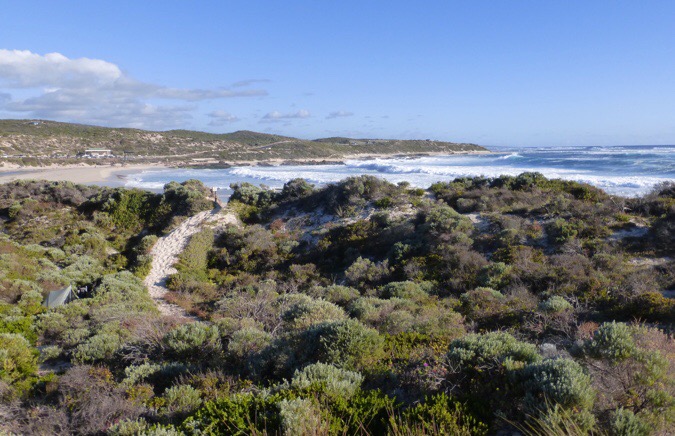 See the tent to the left of the trail?

I got to eat dinner up on the dune and watch the huge waves and the sunset. I was told this is where the world surfing tour has the Margaret River Pro competition.   It really doesn’t get much better. Actually, it does! I have three bars of 4G on my phone too! 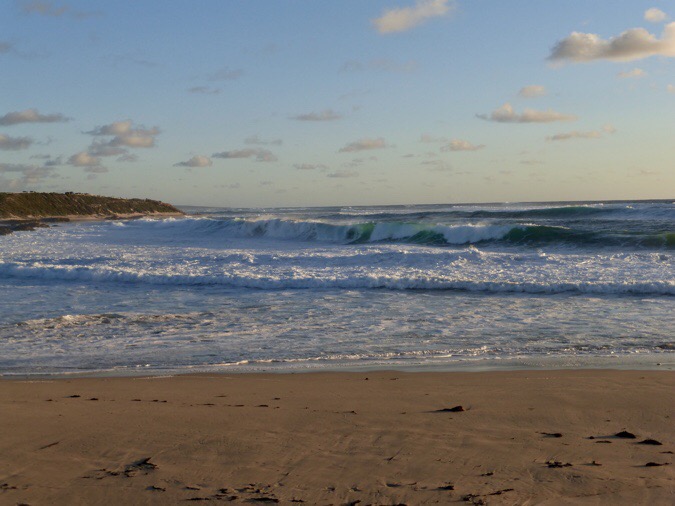 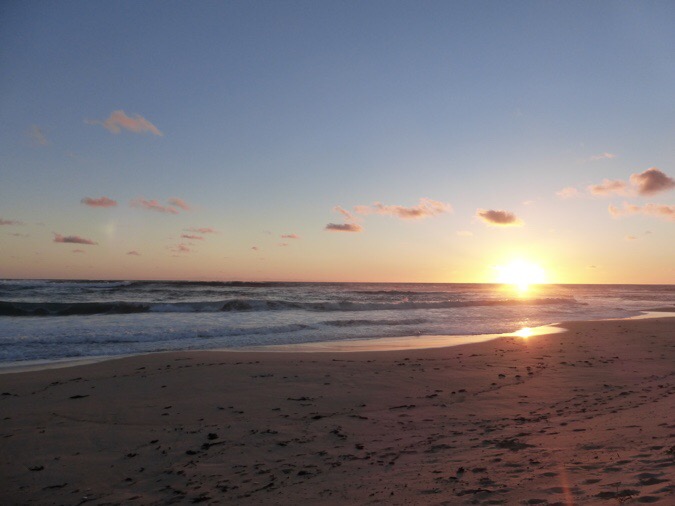 You’d think the huge waves would be really loud, but the sound is muffled just enough by the sand dune. I can hear the force of it as the tide comes in and the waves are getting more powerful. 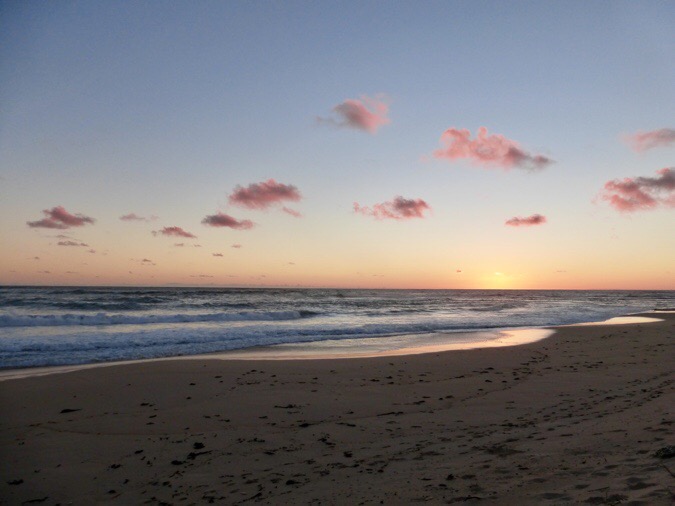 It is pretty cool to think that one dune is what stands between me and such a force of nature. Also, I can see the stars out my opened tent door with how nice out it is and they are stellar. Three for three on camping on the C2C! I am a fortunate person to have so much falling into place on this hike.