It was a great night of sleep and I took my time getting ready this morning knowing that today was a simple day. I left out at 6:50am after a long phone conversation with Telstra, my phone provider out here. Long story short, they have great deals for tons of data and calling to the US. The other day, added more data to my plan, but it was coming off in a way that it shouldn’t. There is night time data after 8pm and daytime data. Apparently, the bonus data I bought was being used before the nighttime data, which is not fair cause I had a ton of night data and that’s what I want to use to post the blog at night. It shouldn’t be coming out of the other data I purchased. Apparently, this is a new thing and many customers are taking issue with it. They were very nice, and I threw enough of the fit that they gave me plenty of data for the remaining time I’ll be in Australia. I totally recommend Telstra if you get something out here.

The hiking today was very similar all day. I had a short beach walk this morning, but the rest of the day was mostly clifftop walking with grand views of the ocean. I was worried it might be monotonous, but it was quite entertaining throughout the day. I am still taken by the fact that I’m even out here, so I am still amazed just watching all the waves and the enormity of the ocean. 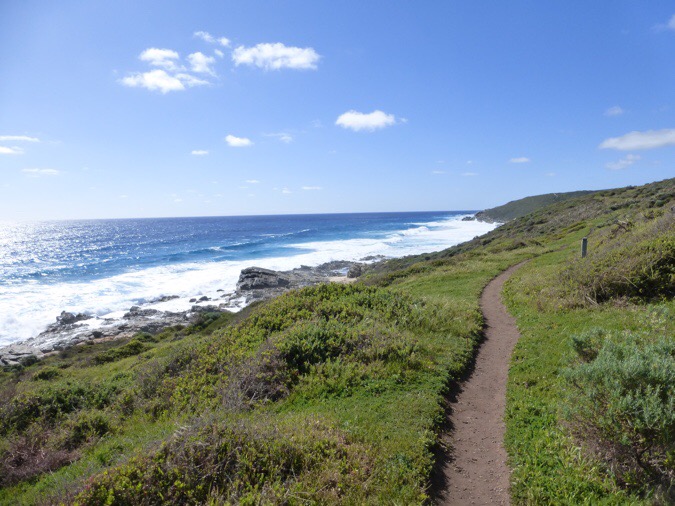 There was a variety of trail that alternated from sand slogging, to bushy, to road, and I kept my eyes peeled for snakes and other things. There is a lot of bush over the trail at times to push through and I always worry about what I may step on when I can’t see the ground. The bush is quite tough and I was happy to keep my pant legs on today. There were plenty of evidence of snakes having gone down the trail and I came upon the second half of what the guidebook says is a python, non-harmful. Still freaked me out. It slowly slithered into the bush next to narrow trail that gave me no option but to walk right through where it had just been. I went through clinking my poles down on the ground just in case and moved quick. Gave me chills. I also saw another bobtailed lizard today that startled me when I turned a corner. 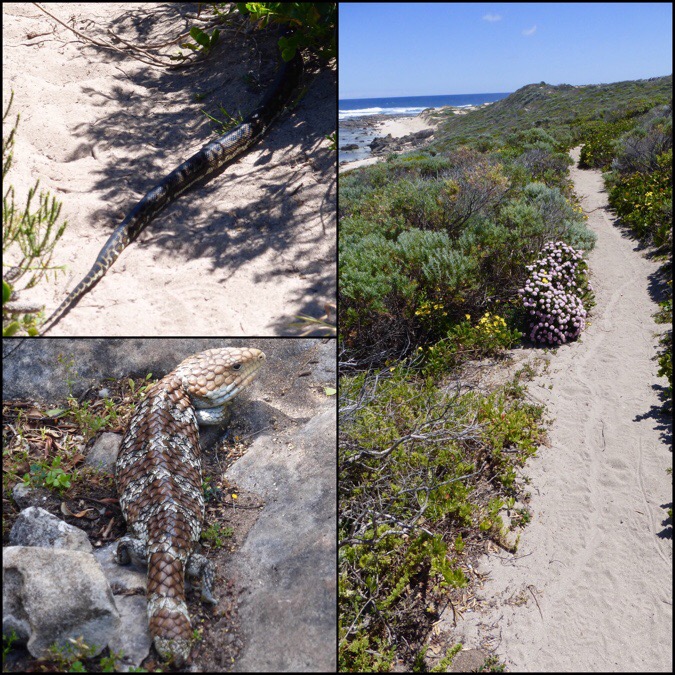 I came across a total of seven hikers today. All were coming the opposite direction. Two couples and three solo guys. A good chunk of my day was spent chatting with each of them when we crossed paths. It was nice to reassure them that the Margaret River diversion was not necessary if they didn’t mind getting a little wet. One of the couples were also aiming for that non-water source water tank on the other side of the Margaret River that I fell for yesterday. They had the same guidebook and also interpreted it the way I did. Good to know I’m not the only one that misunderstood that! The guidebook writers are definitely getting an email from me. 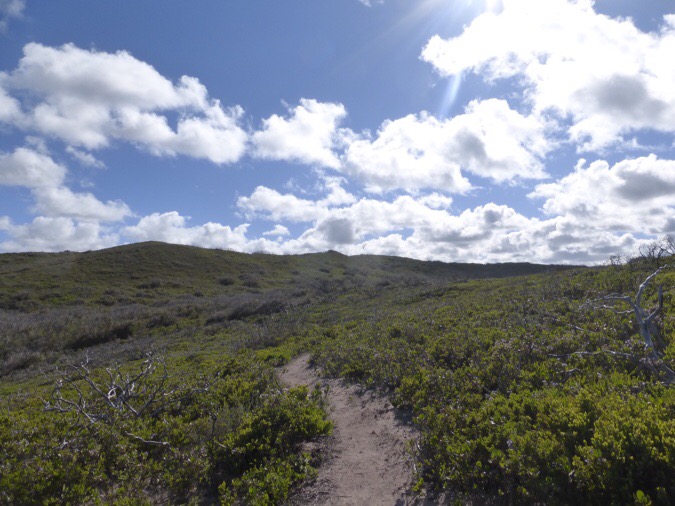 I also came across a group of middle school boys with some guides that seemed like a camp of some sort. They were going at a good clip. I had passed them in the morning, but saw them again while I was stopped having lunch. It seemed they were in a hurry for some reason. The poor boys looked so drained, and when I saw them at the lunch stop, they all were asking if they were getting to stop for lunch and their guides were adamant to keep going. 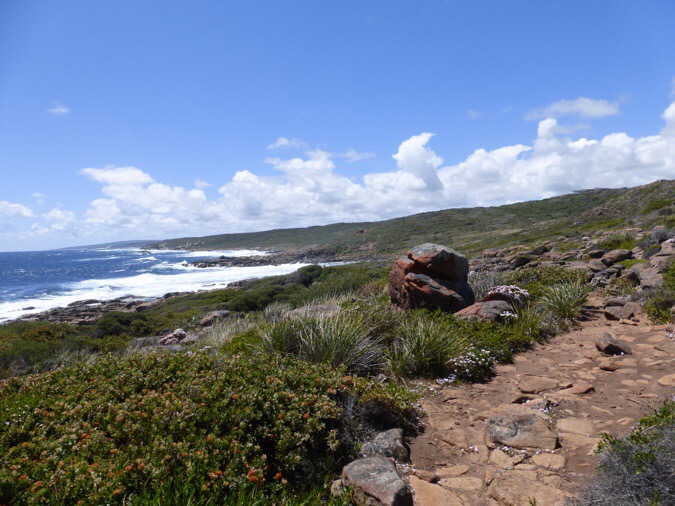 Lunch was a great spot that was at Huzzas Carpark with a shaded picnic table and bathroom. It was a tourist viewpoint with surfers down below, but I still got the space to myself as most people were just surfers heading down to surf or tourists stopping to look at the view for a brief visit. There were a lot of surfers but hardly any waves, so it was uneventful. Apparently, early morning is best. I took a nice long break there and also had internet to do a few things. I was disappointed after lunch when I went just a few minutes further, and the trail dropped down to a more secluded picnic area under the trees that was even nicer and more secluded. 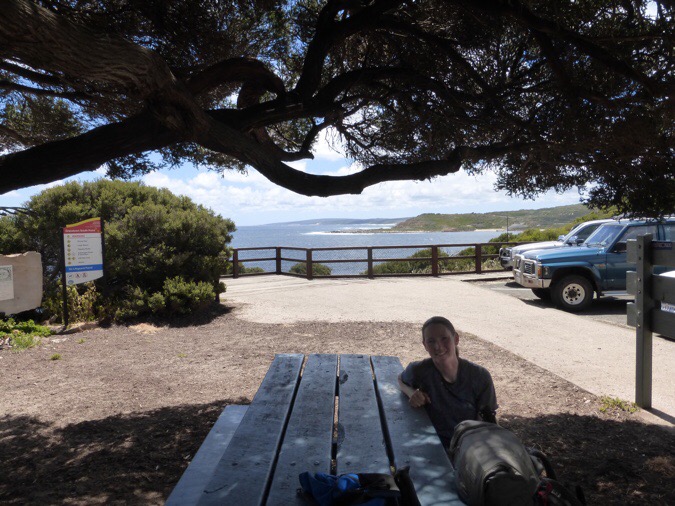 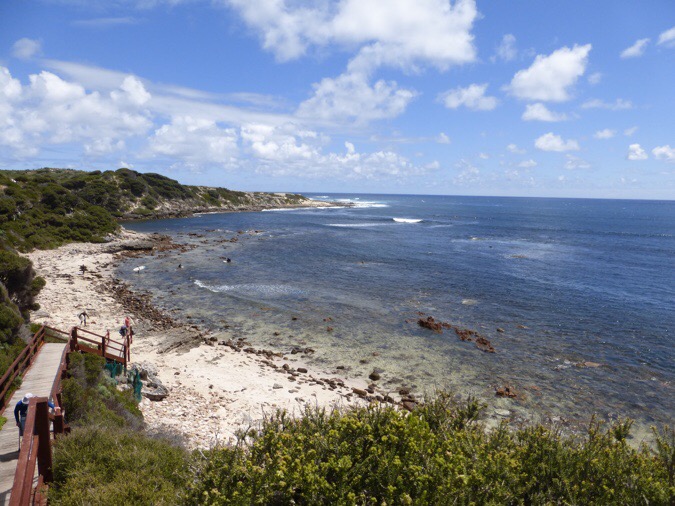 Some surfers down below.

There were many formal viewpoints and carparks along the way today with tourists out. The latter part of the day was more off the beaten path and had more elevation gain and loss. Later, towards the end of the day, I came to a cool viewpoint and realized the bench was curved back for backpacks. It was super comfortable. I had a really hard time getting up from that break! 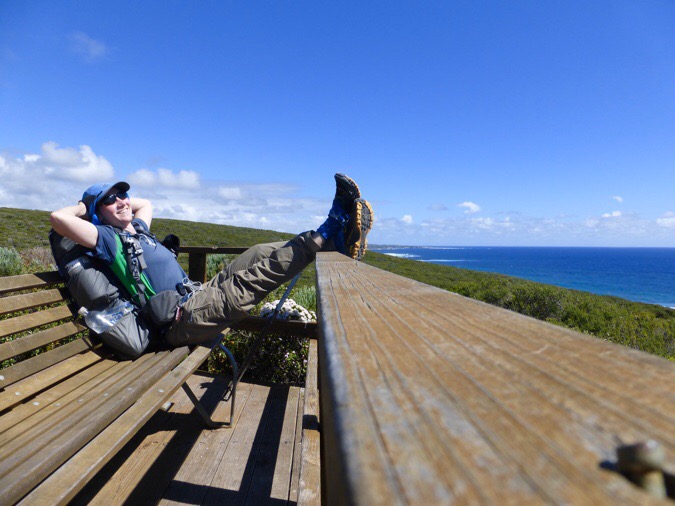 A bench that curves back for packs!

At that point, I was overlooking the Willyabrup Cliffs and could see a guided group of boys repelling down off the cliffs. It is pretty awesome, and as I walked north, I was able to see back on the cliffs and get a good view of where they were rappelling down. The other group of boys I had seen earlier had just arrived at the campsite that was above the cliffs. It was a great spot and I’m guessing they are climbing tomorrow. That would be a dream trip for a kid. Heck, it would be a dream trip for an adult! 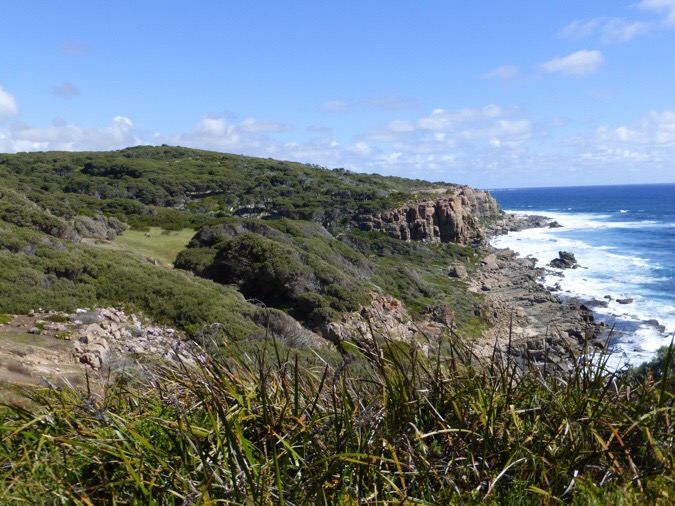 Willyabrupt Cliffs and nice camping to the left in the green pasture and trees. 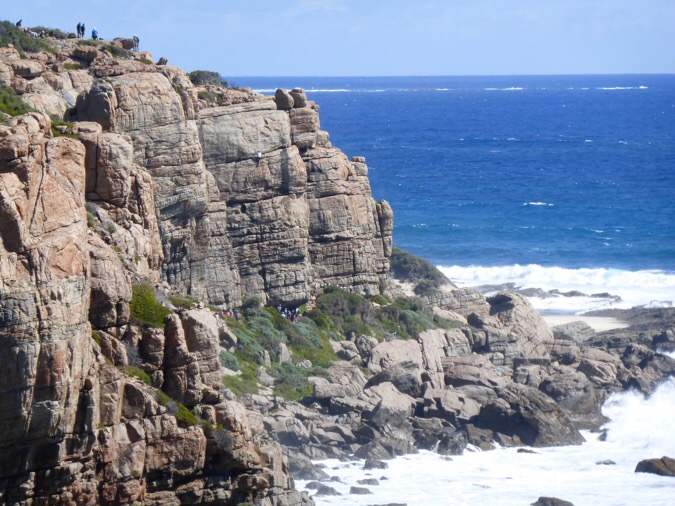 Soon after that, I ran into a guy taking a small group on a short tour. They were at a viewpoint and the guide pointed out the whales. Whales!? What the heck!? I’ve been looking and have not seen anything! Apparently those waves I’ve been seeing way out in the distance are whales. I wonder if this guy just had super good eyesight or my eyes need checking, because he said there were about a dozen not far off in front of me. He kept saying things like, “See that one? There’s one with two calves. That was a good jump!” It was super frustrating that all I saw was a far off splash of water in the air. I can’t believe I was standing right in front of it and still couldn’t see it. I stood there for quite awhile and zoomed the camera in on where they had been jumping, trying to capture something, but no luck. I think he has some button he presses when he brings a tour group by that makes it look like whales. Yeah, that must be it. That or I have some eye condition where I can’t see whales. 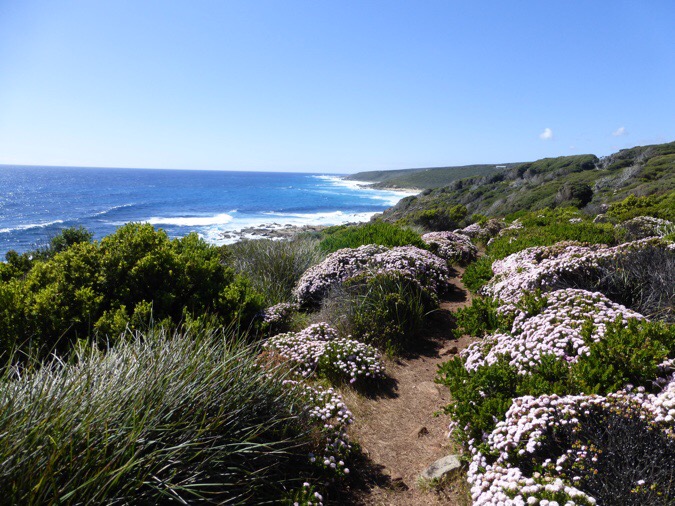 I do want to take a moment to mention that this trail is marked, but could be marked much clearer at intersections. It is odd because they put the markers after the turn, so you have to make a guess and then head that way and wait to see if you see a marker in a few meters. What’s even stranger, is that this is the first trail I’m on that the marker does not have the trail emblem facing the hiker, but is parallel to the trail. So, if you are looking for a marker, it is more of a post you would be looking for, but these posts are often obscured until you’re next to them. I have the GPS track that I found online, and find that the easiest thing to do when I hit an intersection without signage. The first photo below was on my left well after making a turn at a junction. The second one means to turn right up the steps, not straight ahead like most trails. 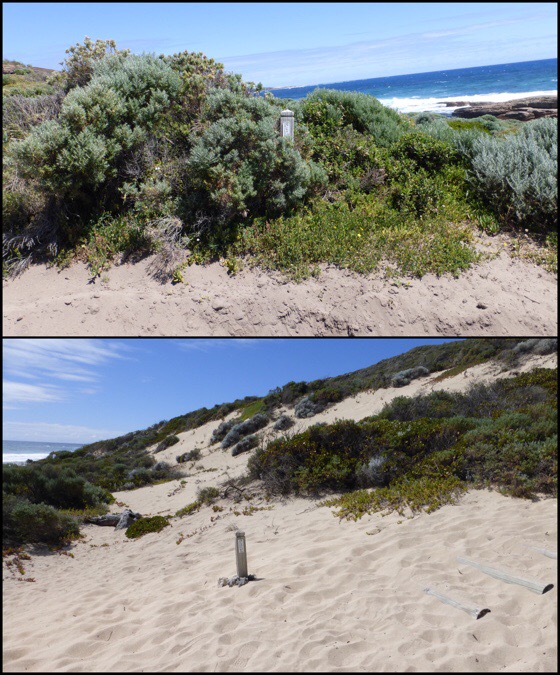 Tonight is my first night using one of the designated campsites, Moses Campsite. There are four Cape to Cape campsites with toilets, tables, and water tanks and the rest are privately owned requiring payment. This site lined up perfectly with the distance I planned for today and I heard it’s the best campsite with a sunset viewpoint. I was sold. I arrived at 3:45pm and got another great sheltered spot in the trees. I got the whole site to myself and love it! 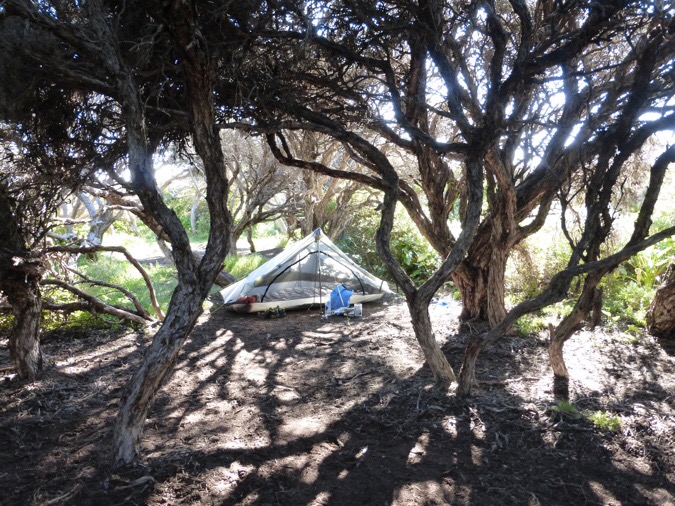 Just 50m away is a bench overlooking the ocean and I got another sunset. Still so surreal to have all this to myself. I guess there is so much easily accessible coastline for sunsets that people don’t feel the need to work for it all the way out here. Works out for me! 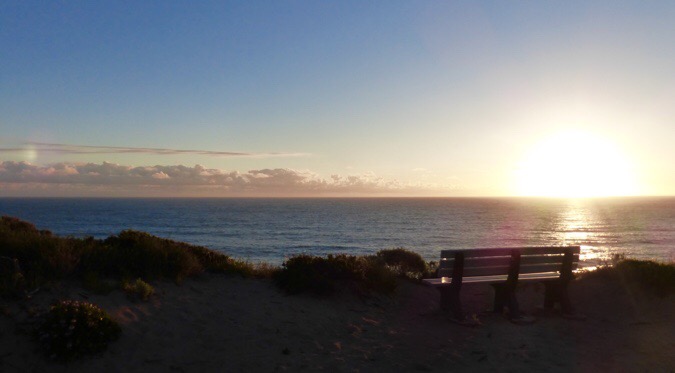 However, I’m not really alone. I have a local quenda (type of bandicoot) that is quite habituated to humans hanging out. Now that it’s dark, he’s come over and has fully sniffed and nibbled all around the tent. He’s mere inches from me and boldly checking things out with no fear of me. He isn’t skittish at all. Even when I shined my bright flashlight at him, he seemed even more comfortable like I was doing him a favor lighting up the area for him. Even after hitting the tent when he tried digging under, he retreated a bit and immediately returned. I just let him get all the sniffing out of his system and he finally left. The little food I have left for my last day tomorrow is well sealed deep in my pack and multiple bags. Hopefully, he won’t return. He actually wasn’t even interested in that side of tent, so that’s good. 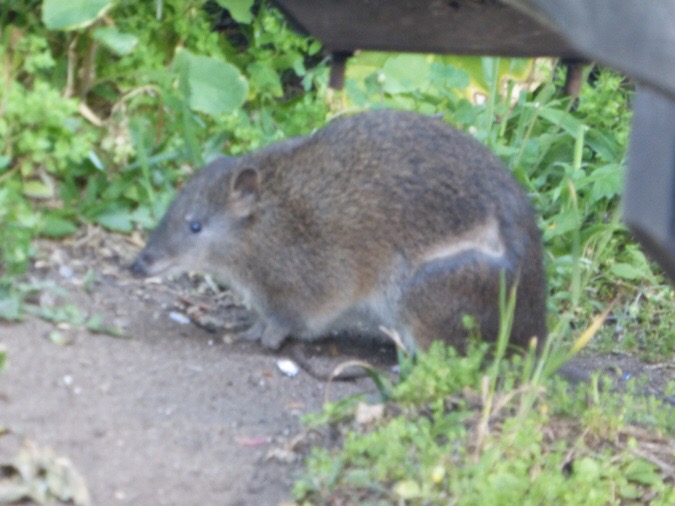 Ok, off to watch an episode of Bloodline. Almost done with first season. Not addicted to it, but it’s all I have and now I have to see what happens. 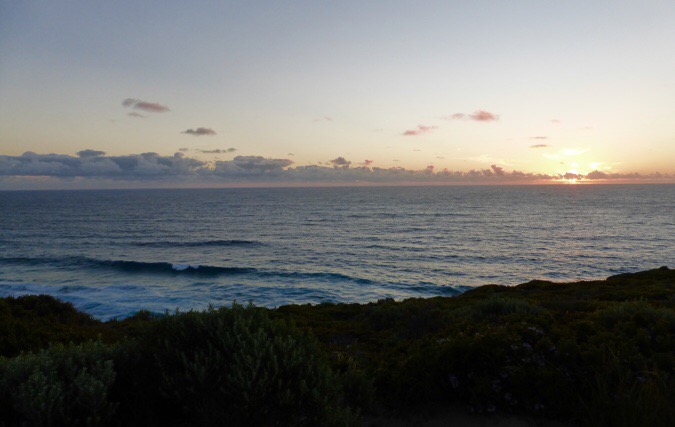