Right on cue the rain came down at 4:15am this morning. What is it with this 4am rain out here!? I waited to leave at 7am because I wanted to get to town at 8am when the place I was going to eat breakfast would be open. It was a blustery day, and I found out when I got to town that there was actually a severe weather warning in effect due to the high winds. The track followed the railroad tracks into town, and dipped back and forth from an old road to trail sometimes, but I just stayed on the road to keep things simple in all this rain and wet brush. 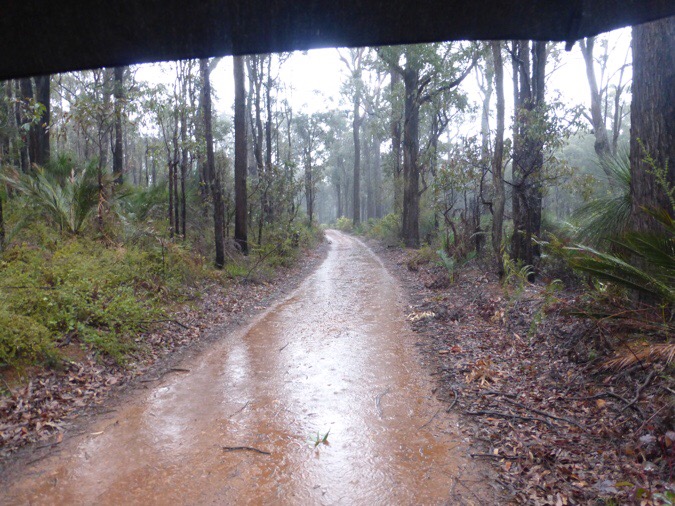 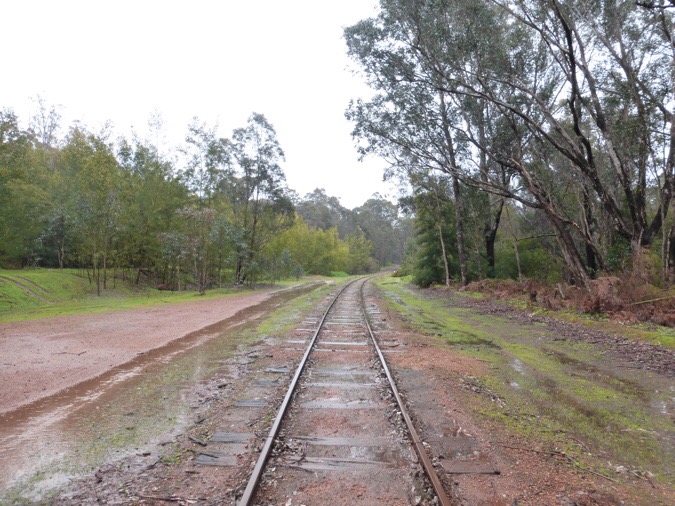 I made it to town and had breakfast at the Blue Wren Cafe. I have to say that so far, it seems that breakfast servings out here are quite small compared to US portions. I could have eaten two of these plates, but they are pricey at $14US/$18AUS, but there isn’t tax or tipping out here so it does seem to even out in the end. 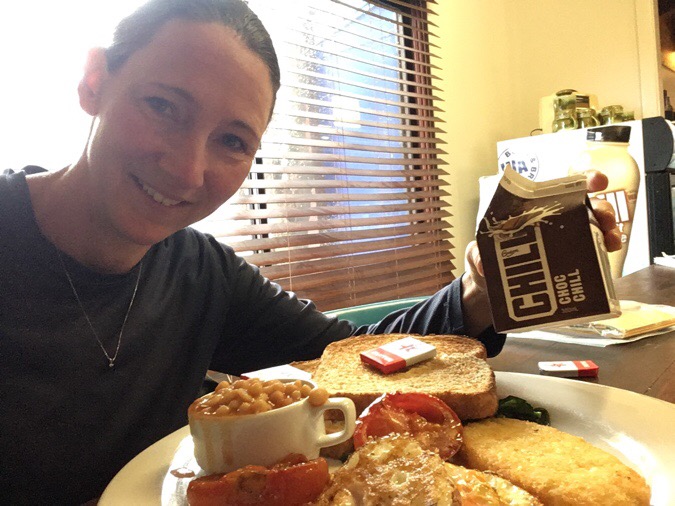 I sat inside for two hours and used their wi-fi while my chilled body enjoyed the warmth. The wind blew hard and the rain came down outside on and off. I walked the half-mile to the caravan park where I had a reservation for a backpackers room. I’m so glad I got a room with heat! They were kind enough to let me check in hours early since no one else was there. I was ready to relax and take a very long hot shower. Then I asked for my resupply box to find out that it wasn’t there. It took me about an hour of calling places in town and trying to use the online tracking system to find the box before I realized that I never sent one here. Gawh! I sent one to another place that starts with the letter D and didn’t even think about the fact that I meant to buy here all along. Such an idiot… So then, I postponed the shower and put my wet shoes and socks back on, and went into the wind and rain to resupply back a half mile into town. I know a half-mile may not seem like much, but on a day when I intended to hike a nero (near zero), and get a break, each step felt exhaustive. I was sure to go in the moments of clearer sky cause it moved in and out swiftly all day raining on and off in strong spurts unpredictably. 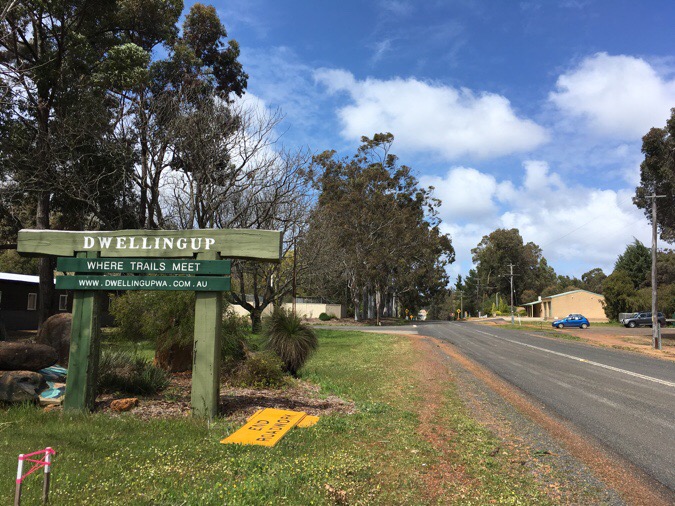 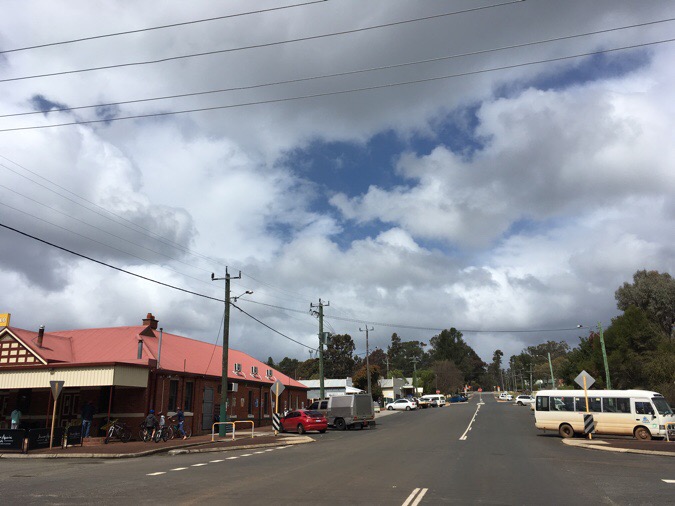 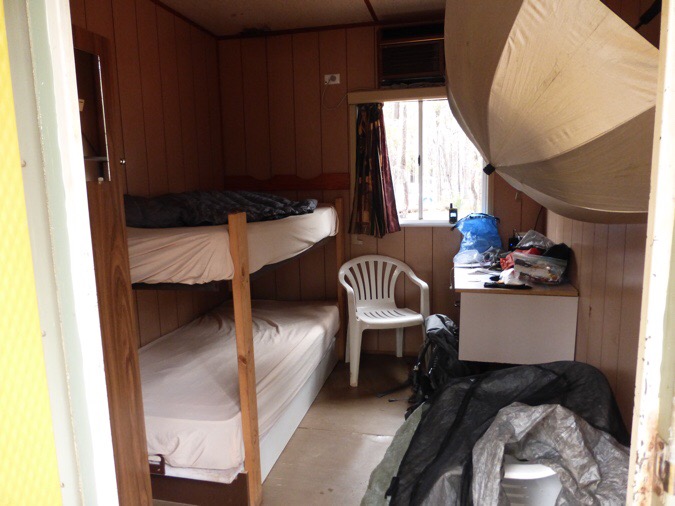 While I was in town, I saw Tanya and Liz arrive. Fortunately, the rain had let up for the second half of the morning, so they mostly had the wind to contend with for the latter half of the walk in. Their ride was there to pick them up and they got their celebratory burgers, which are huge at the local pub. It was fun to see them. The game was on and the pub was packed, so they were sitting outside because it was so full there was no seating. 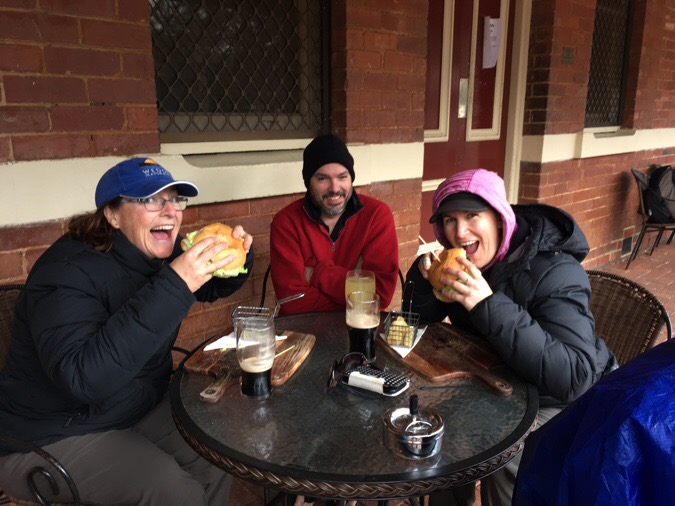 Yay for Tanya and Liz!

At this point, I felt no desire to participate in watching the final. I know that seems horrible, but just being in town around people and being cold had me really wanting to get back and take that hot shower and lay down in a quiet space. I get more exhausted on town days it seems with all the stimulation and all there is to do, so I was pretty wiped out.

I knew the resupply options here would be minimal, but it is only 3-4 days to get to the next town, so it wasn’t worth sending a box (which I should have remembered when I thought mine hadn’t arrived!). I went to the visitor center and they had a hiker box with some bars and crackers in there that I was able to grab for free that another hiker left. The rest I was able to get at the small IGA that was in town. Let’s just say that this is the most unique resupply I’ve had. I had two extra dinners from last leg and a few bars, so I just needed to get everything but dinners pretty much. The best news is that they had tuna packets! Yay! The rest of the food I had to figure out what to do because there were hardly any bars to choose from and that is what makes up my snacks while I walk. Not my first choice but this will do for a few days. This cost $53/$66AUS, which isn’t as bad as I thought it would be. Do remember that a chunk of this came from the hiker box and what I already had. 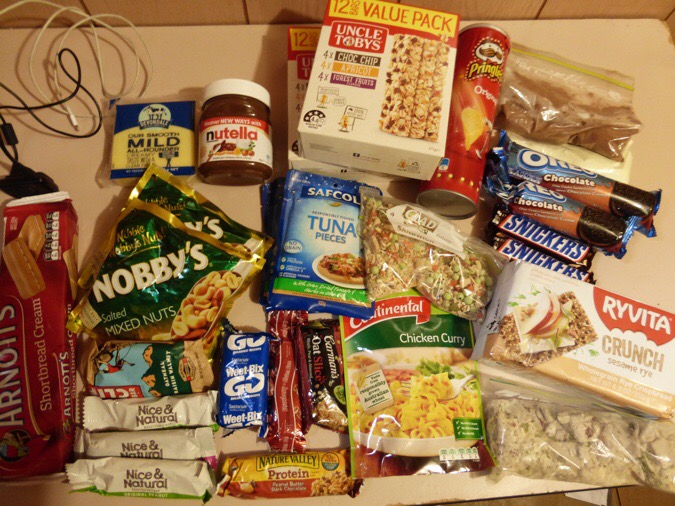 I walked the half-mile back, did laundry, resupply, and took a long hot shower. I also booked my accommodations for the next town and did some stuff online that needed to be done. Where I am there is just one bar of service unless I walk outside in the blustery weather, so things were moving slowly. That hot shower was the best part of the day!

By the time I finished all that, it was time for dinner. I ran the half mile back into town again (out of annoyance) and went to the pub. They did not have a meat pie without Guinness in it (yes, I know it cooks off, but it’s the principle of it), so that will need to wait for another day. Don’t worry, I will have one at some point before I leave Australia. The burger was so huge that I could not finish it. Such an embarrassment for a thru-hiker to not finish a meal. I ran back to the caravan park. It was dark out and there are no streetlights in this town. That is creepy. I finished the night off watching the shows from this week. I got to watch Grey’s, Survivor, and This Is Us. I think I’m done with This Is Us. It’s just not connecting for me. I want to like it, but it feels just a bit too corny.

I’m not thrilled about the forecast, but am told it should just be showers. Still, better than oppressive heat…I think… At least tomorrow looks good. Onward and southward! 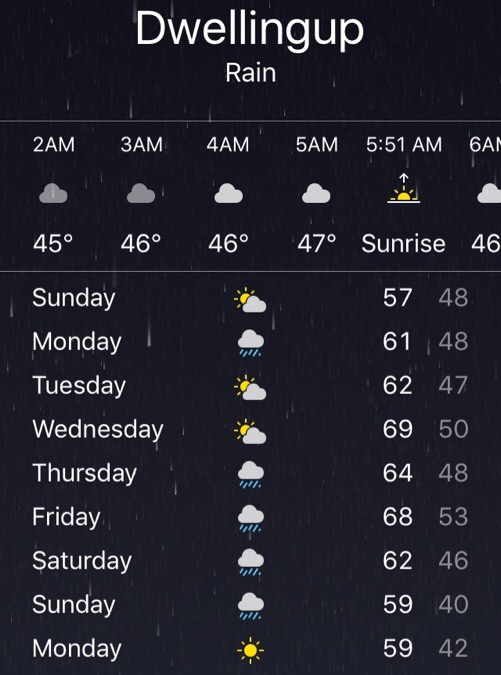