Day 11: A Day For Headphones 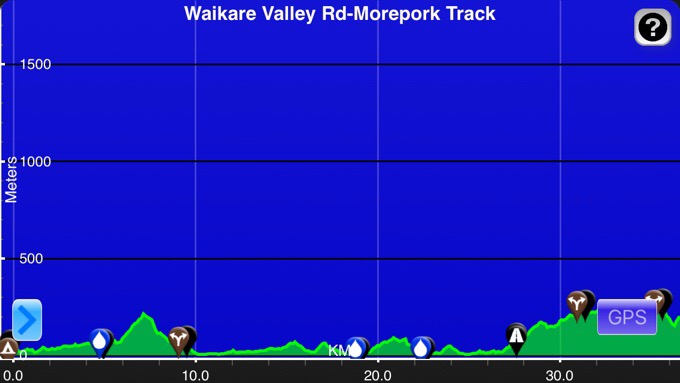 First off, there was a large earthquake on the South Island of NZ last night. We did not feel it. Thank you all for your concerns. New Zealand has had a heightened number of quakes this year, and I’m sure there are many more to come while I’m here. I am aware that everyone is concerned.  If anything happens, remember that I have my check-in on my “Where’s Wired” page and I’ll be sure to post on social media once I have service to let everyone know all is ok. It was very kind of everyone to check-in and I’m sorry if I didn’t reply to you all individually.

As expected, we all woke to a field of condensation and wet tents. It wasn’t the terrible kind that soaks everything, but all our tents were pretty wet and sleeping bags were damp. We headed out at 7am and soon were in the 3km Papakauri Stream walk. It was about an hour of wading down the stream that had slippery rocks along the bottom. 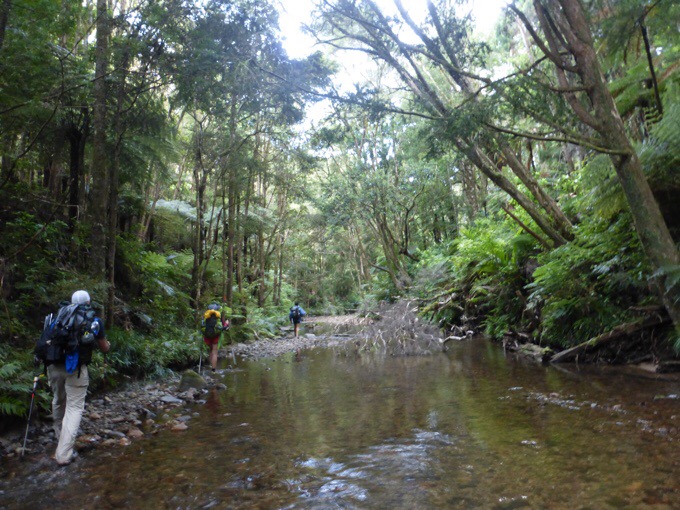 Hiking down the Papakauri Stream. 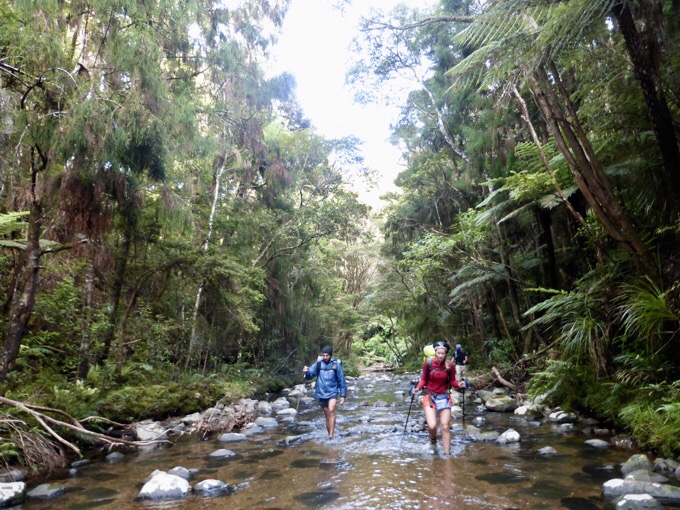 Not far into the stream walking, we noticed that there were faint side paths every so often along the side that went up on the bank for awhile and then dropped back to the water. They seemed to help avoid the deeper parts of the stream. Some were well marked with an orange TA triangle, some had an orange ribbon, and some weren’t marked at all. Early on, Felix went up one to see if it was a game trail or actual trail. He yelled down that he wasn’t on a trail, so the remaining three of us continued on down the stream. Felix never dropped back down to the stream and we figured he was doing his own thing, which he likes to do, and we didn’t see him again in the stream section. 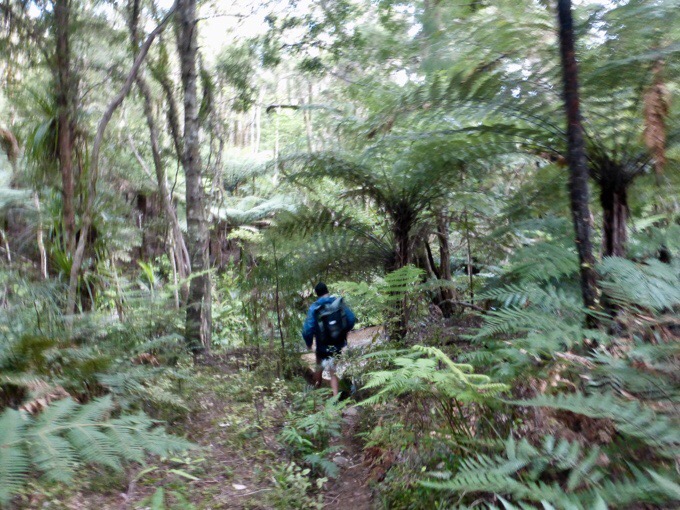 The brushy trail off the shore of the stream. 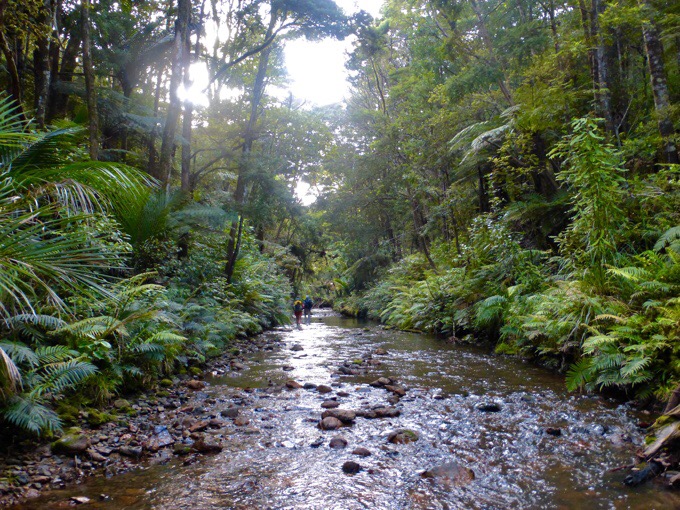 As soon as the section of wading was over, we came to 12mi/19km of road walking. The first 8.5mi/14km of it was a paved highway walk with little to no shoulder. Yep, more highway walking. There is a ton of this on the North Island, and I’ve expected it, so it hasn’t been a surprise. It’s a morale killer for some, but for those that knew to expect it, it’s just another part of the trail. 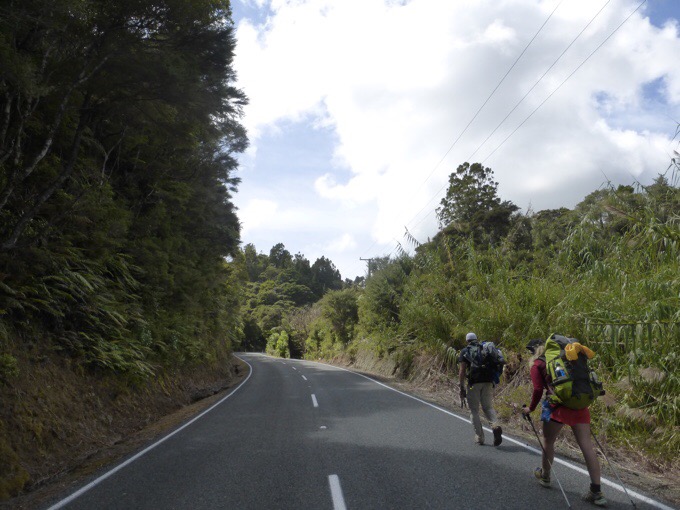 We saw on Guthook’s App (love it!) that there was a beach with a picnic table at the 7.5mi/12km mark, and it was just the carrot we needed to keep a good pace and make it for lunch. All three of us put in our headphones. I used the pocket app to listen to a couple online articles I’d saved. I listened to the lengthy blog post that Anish (an awesome female thru hiker and record holder) wrote on her recent self supported record of the Arizona Trail. It was fun to listen to a full thru hike of the AZT all on one go, and it was motivating to hear the details of a successful self supported record attempt while hiking myself. 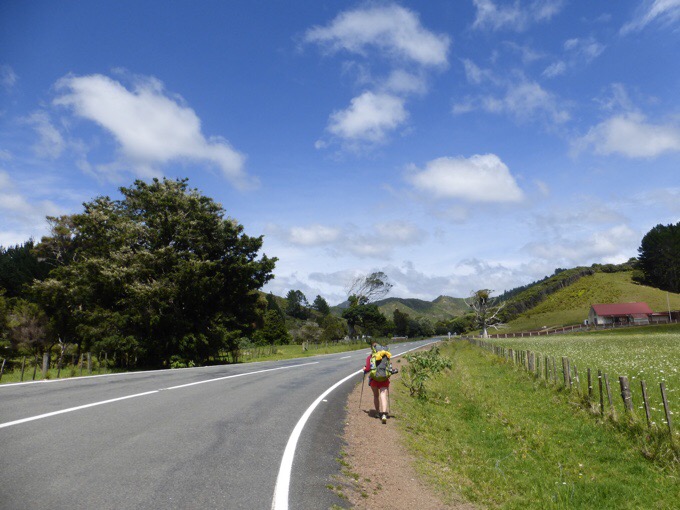 After a couple hours, we arrived at our lunch destination. It was great. There was a picnic table, a beach with a nice ocean view, and some tourists there with camper vans. Not long after we got there and laid out all our tents to dry while we ate, a man from the US came over and offered us cold beers. I don’t drink, but Will and Becky were happy to partake. Trail magic again! 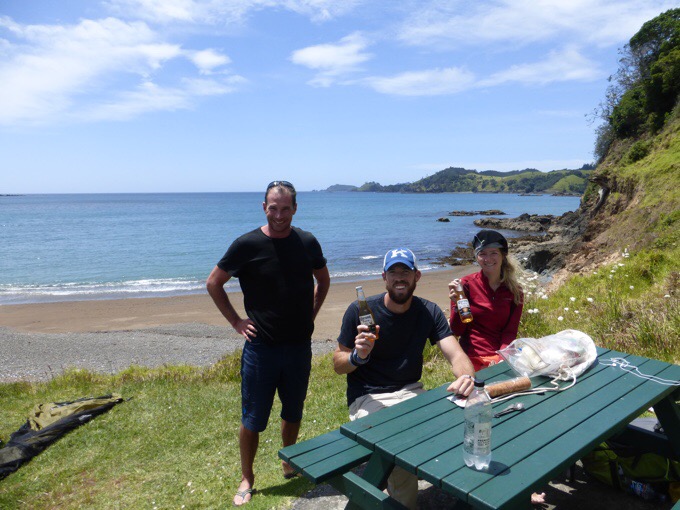 A man gave Will and Becky each a beer at lunch.

After a nice lunch, we continued on to another 4mi/7km of road walking. We’d been in touch with Claudia, who roomed with us in Kerikeri, and thought we might catch up to her today. She said she ended up having bad blister issues on the road walk after the water yesterday. A nice woman saw her limping and offered her a place to stay for two nights, so Claudia is resting her feet. I messaged her that she should come out and bring us some trail magic on the road walk. After lunch, we got a message from Felix that he had run into Claudia who actually did try to surprise us with some trail magic! We had already passed, but she had brought cold soda, bananas, and gummy worms. Oh man, so close! We were bummed we missed it. Thanks for trying Claudia! Apparently, it didn’t go to waste as Felix and another hiker we all know came by while she was there.

The 4mi/7km after lunch was a long winding uphill past many farms. The road changed to dirt and gravel, and was much better to walk on. The top of the climb had one of the best views of the hike so far looking back on the green rolling hills and the ocean. It was cool to look back on where we came from and get a nice rewarding view. 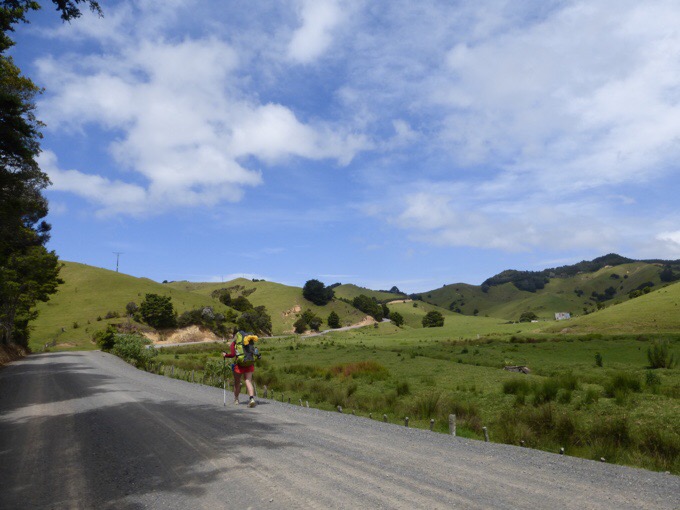 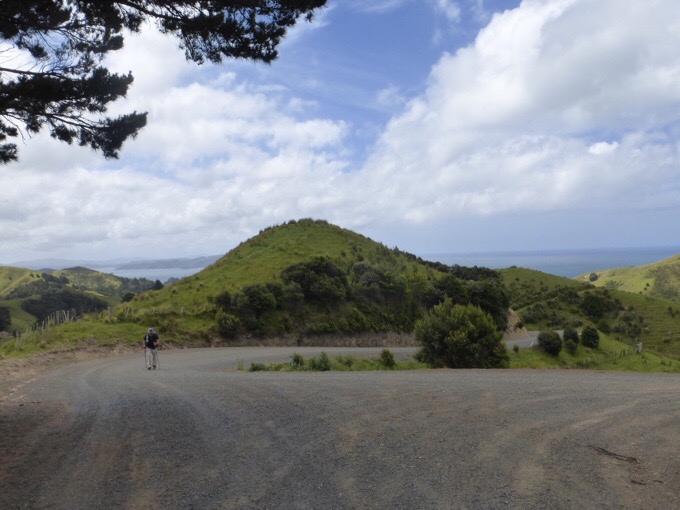 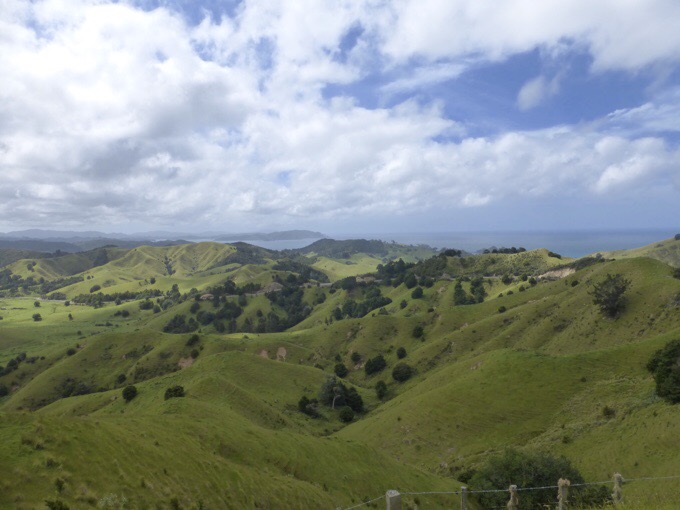 We got to the Morepork Track at 3:30pm. We knew we had just over 3mi/5km left to our planned camp spot, and worried this wooded section might be slow going like the previous forests last section. Thankfully, it wasn’t and it only had steeper ups and downs at the end. By the time we made it to the top of the climb that had our camp spot, we were happy to be done for the day. It was a full day and we were all good and tired. The Guthook App is great at giving suggestions of possible camp spots, but you never know what you’ll get as far as how quality the spots might be. It basically lets you know it’s campable, which is great to know on a trail like this. It said there was a view, which is sorta true. If we walked a bit, we could see the ocean a bit, but I had hoped for more of a view. The important part is that it’s well sheltered from the wind gusts and the small chance of possible showers overnight. 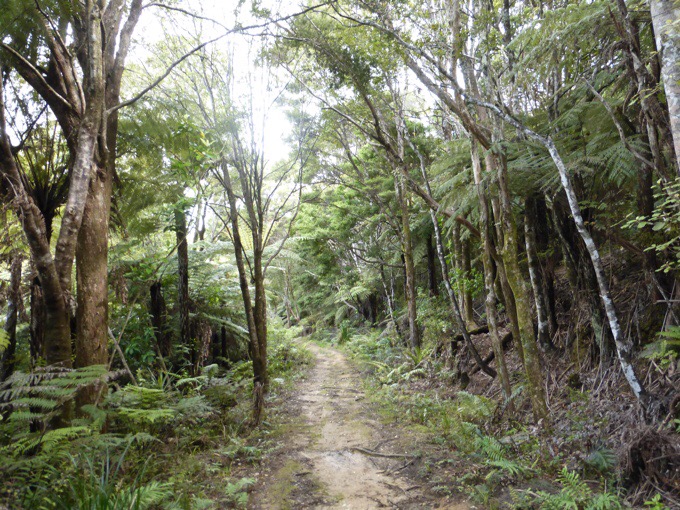 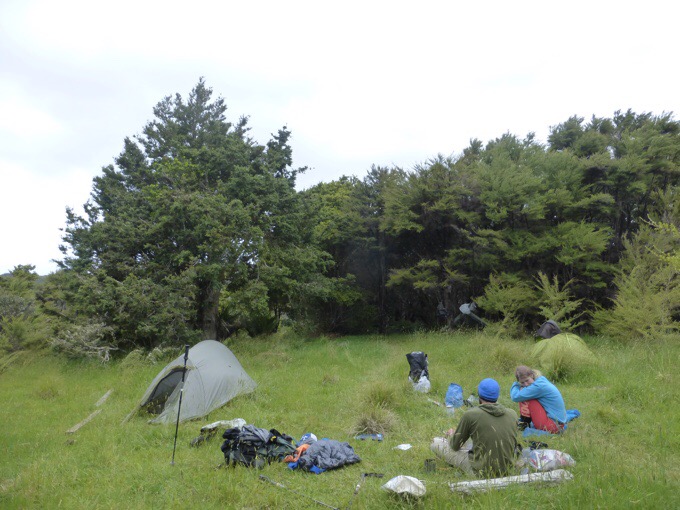 Our grassy campsite. My tent is in the trees.

Tonight is the night of the closest (and largest) super moon for forty years or something like that, so we aimed for this spot to get a view. With a chance of rain tomorrow, there are clouds in the sky, but fortunately, they thinned out and we were able to see the moon, which looked like…well, a big moon. I zoomed in the best I could with my point and shoot camera and got an ok shot. It was nice to be able to see it. 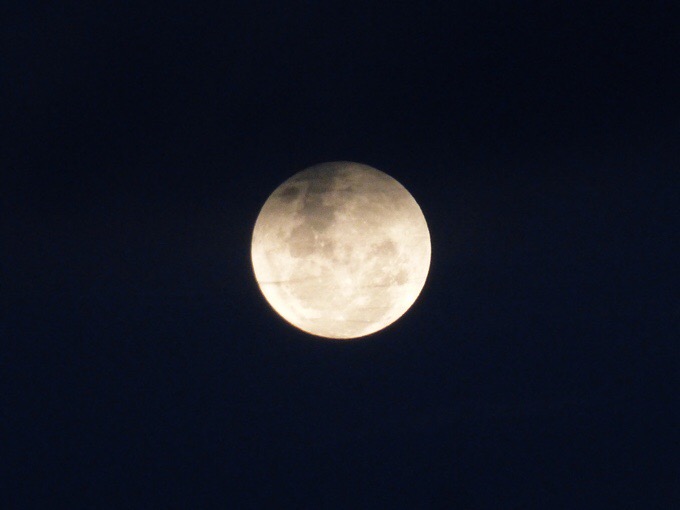 Felix arrived as we were having dinner. He’s more of a solo hiker and this may be the pattern of seeing him on and off as he does enjoy having a group to check-in with. We looked ahead to tomorrow and saw that there was another freakin’ $10 boat crossing and $15-$25 camping or cabin options. This trail is killing our bank accounts! It keeps going into towns and limiting camping options. I feel like half my spots have been paid for and half have been in an actual wilderness. It’s a killer for morale for us to not be able to just hike and not worry about timing and where we might land. Tomorrow, it may rain, and we aren’t sure how difficult the terrain will be, but there are two options. Do a short day and pay to camp at a place with no electricity (I need to charge) before town and then do another short day waiting for the 3pm boat ride and find a plug in town…or push a quicker pace to make it to town tomorrow night, resupply, and make the boat ride where there is a full Caravan Park and the option of paid camping or an indoor cabin if it’s a rainy night.

I’m wanting to push, but everyone else is hesitant given how tough today was to make miles and it was an easy road walk. We decided to give it a try and we will wake up an hour early to at least allow for the possibility of making it to town and doing the boat tomorrow. In the end, it would mean the difference of half a day given the timing of the boat and we can sleep in and relax the following day at a place with showers and electricity. I hope it’s smooth walking tomorrow and don’t want to push the others to exhaustion. They are definitely hesitant and worried about making the miles and possibly wearing themselves out. I understand that, and we will just see how it all goes tomorrow. I’m happy they are willing to get up early to at least allow for the possibility of making it happen.

To make things even more confusing. My friends that did this hike in previous years don’t mention taking a boat. We all loaded what we thought were the most recent tracks, maps, and trail notes off the TA website before our hikes, but Becky’s maps show a road walk around the bay instead of the boat. Ours shows a road walk after the boat. So, it’s almost the exact same mileage, but it’s tough to decipher which is the “official route.” The trail notes word it in a way that the boat is the official and the road walk is the alt, so that’s what we decided to go with. The pain is that it’s the boat that has us having to push, and if it didn’t exist, we could sleep in tomorrow and leisurely hike with no worries of timing. Ugh. We’ll see how it goes. Ok, time to sleep. The wind is blowing through the trees and it’s great that we’ve found a good spot protected from it for the night.