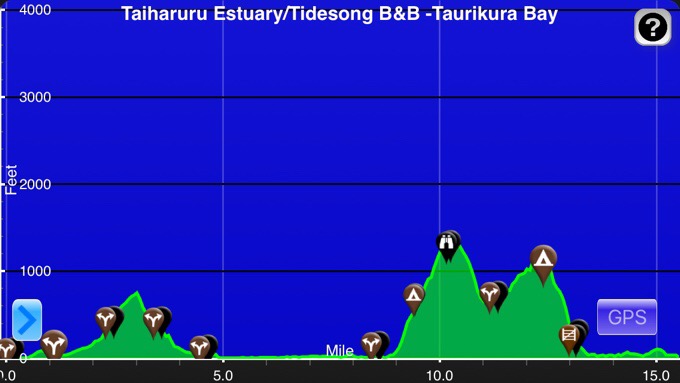 You’d think I’d be used to this by now, but once again, it was quite a unique day that could only happen on the Te Araroa. It is funny because it felt like a regular day out here, but when I look back on it, I realize how unique it is. Each thing on its own seems fine, but then when listed all in one day, it’s pretty incredible to think that it all can be part of the same day. It started out with us waking up in our cozy little cabin and getting an awesome pancake breakfast (with tons more!) from Hugh and Ros with the six other hikers that stayed at Tidesong last night. 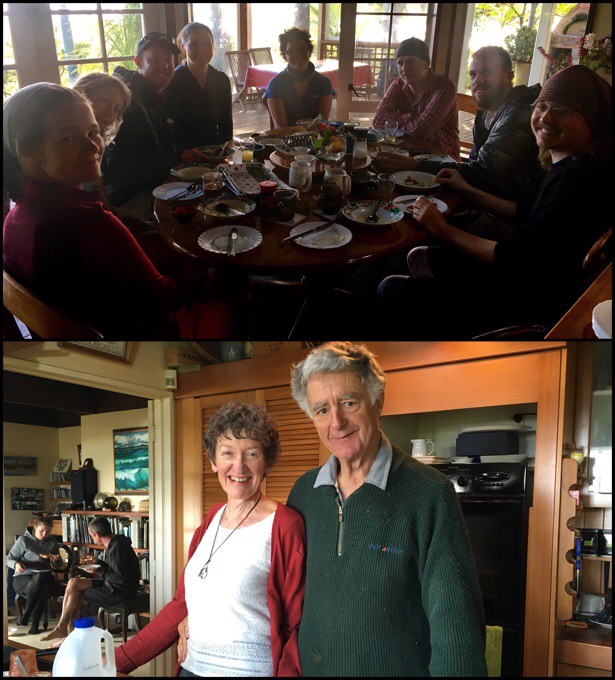 Breakfast from Ros and Hugh with Becky, Sally, Bill, Emily, Joanna, Anthony, Will, and Calvin.

Because it was high tide, Hugh took us across the Taiharuru River crossing in groups of three in his boat. It is walkable at low tide. Needing to wait for others and for the boat shuttle, we didn’t get going until after 9am. 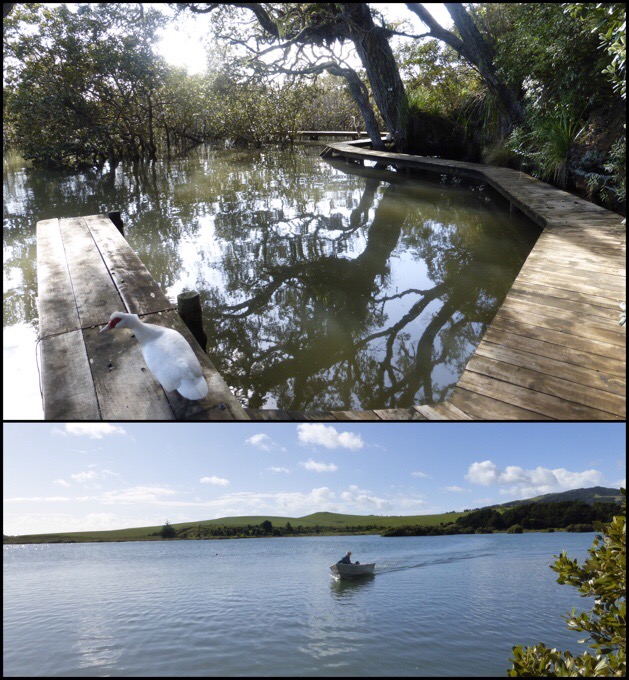 Cool walkway from Ros and Hugh’s property and Hugh coming across to shuttle us at high tide.

Then we started the Kauri Mountain Track, which was mostly a dirt and gravel road that had plenty of uphill. Everyone spaced out along the climb, and the three of us moved on ahead as the day went on. The pattern the last couple days seems to be that we are with a group to start out, we move ahead over the day while leapfrogging a bit, and then we see many of the same people again either at the end of the day or a day or two later once they hitch a chunk. I still haven’t gotten used to that aspect of this “trail” and I’m not sure I ever will. 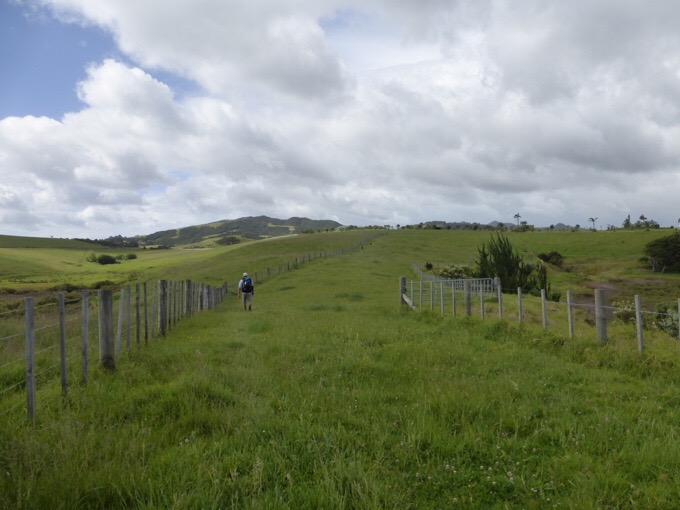 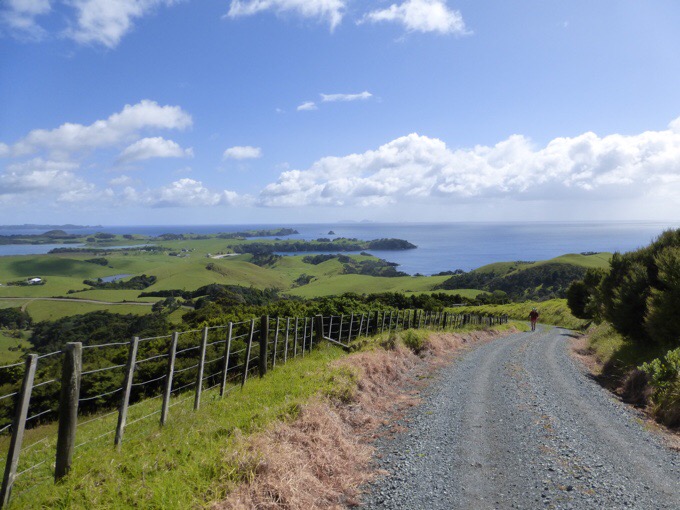 We soon transitioned from farmland with electric fences, cattle, and sheep, to the ocean. Tide was still high, so there was a bit of scrambling along rocks before crossing a section that ended up being much deeper than expected. 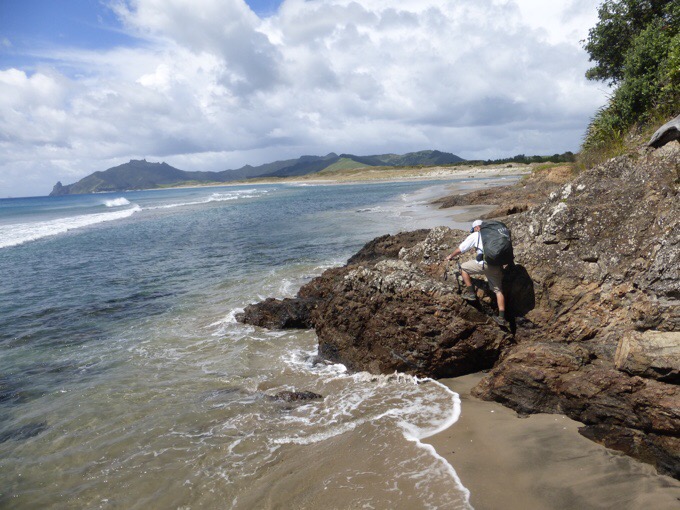 When we arrived, Claudia (who last saw when sharing a cabin in Kerikeri) was there with a hiker named Olaf. Claudia took a day off to heal some blisters and is back on trail. They waved us across what we thought would only be maybe thigh high water. The water wasn’t swift, but the tide came in and the sand dropped, so I unexpectedly found myself in water up to my belly button. Well, I can now finally say I’ve sorta swam in the ocean out here. It was surprisingly not too cold. 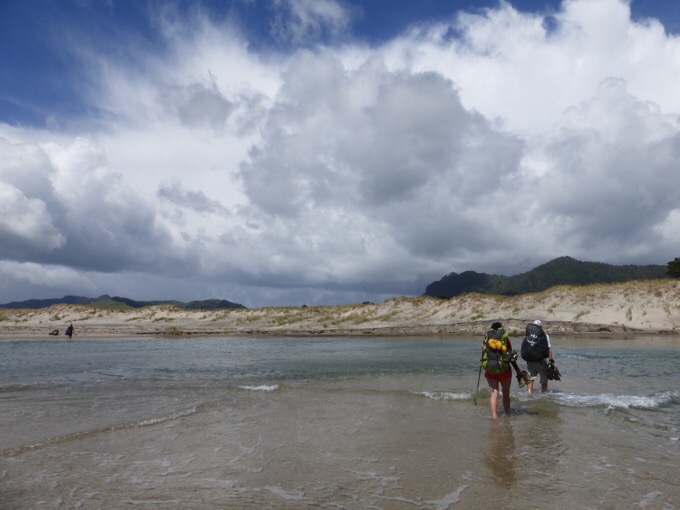 This got unexpectedly deep.

Up next was a 4mi/6km beach walk on Ocean Beach. It was quite pretty with the rain clouds and the teal water with strong waves. There were rain showers on and off, and it was quite windy today, so there were times the sand was blowing so hard against our legs that it felt like needles. The whole time on the beach, we could see the Te Whara Track, which was the mountain straight ahead. Before transitioning from beach to mountain, we had lunch at some picnic tables at a trailhead up off the shore. 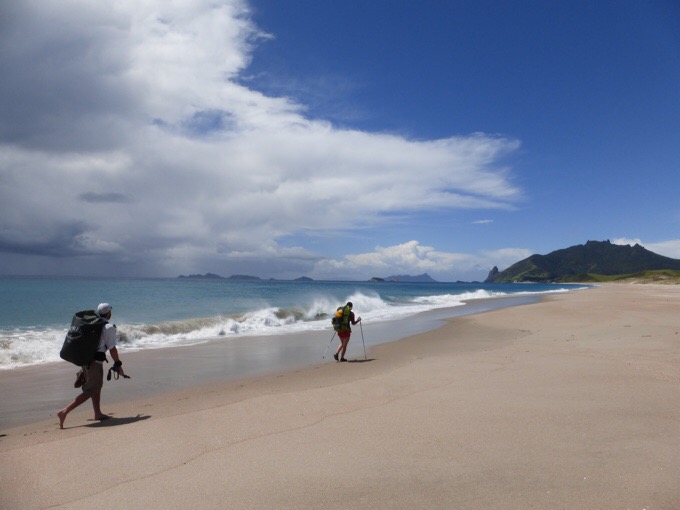 We then started the most tiring part of the day, and the steepest hiking we’ve done all trail. Straight up and down along the Te Whara track. It had everything including, steep steps, grass, trees, roots, and rocks. Whew, it was steep! Apparently, there is a road, that makes it possible to hitch past part of it or all of it, and some chose to do that. It took much of the second half of the day, and light showers continued to come periodically. Did I mention it was steep!? 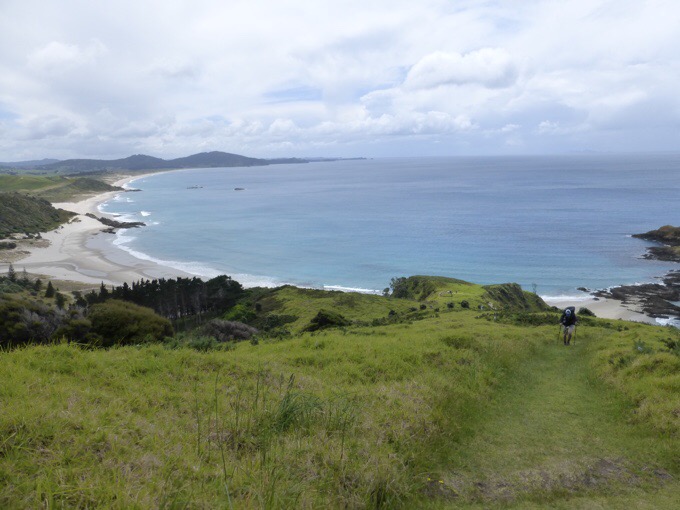 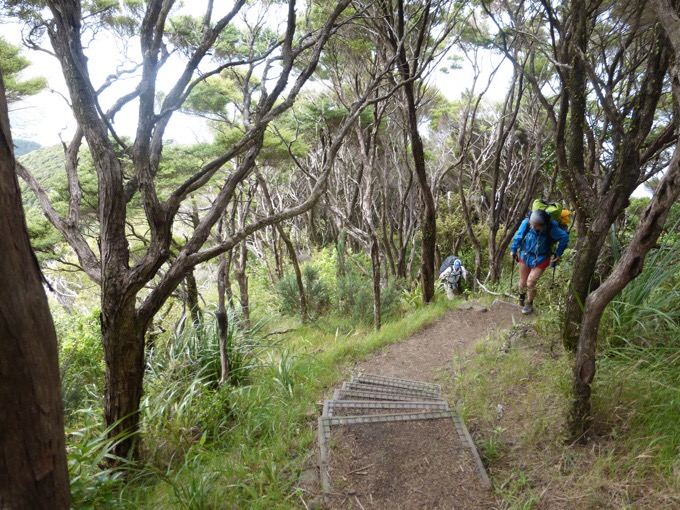 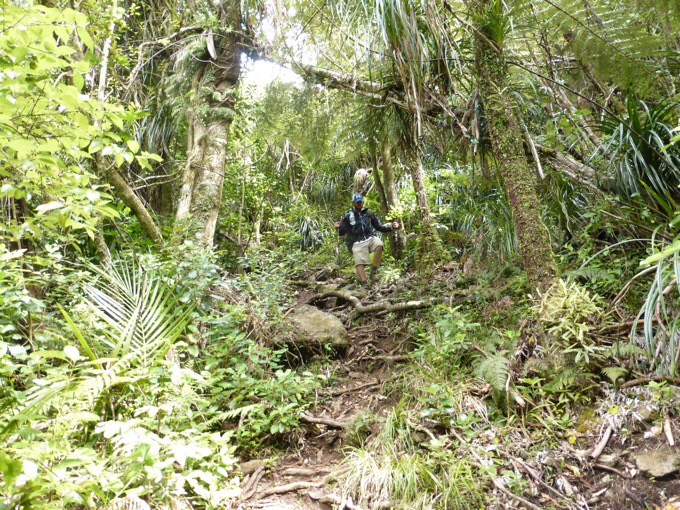 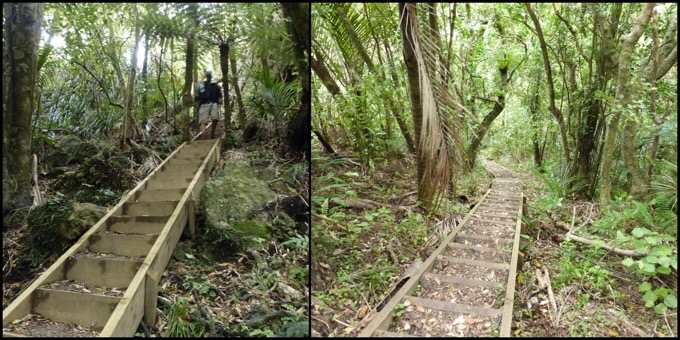 We popped out the other side around 5pm and began the paved road walking section of our day. The next major task is to get a boat across the next bay. We were pretty well spent for the day, and chose not to make it a death march and do the crossing tomorrow morning. I’ll explain more about the strategy with the boat tomorrow, but our next obstacle was figuring out where to sleep in this very residential area that curves along the bay on a road. 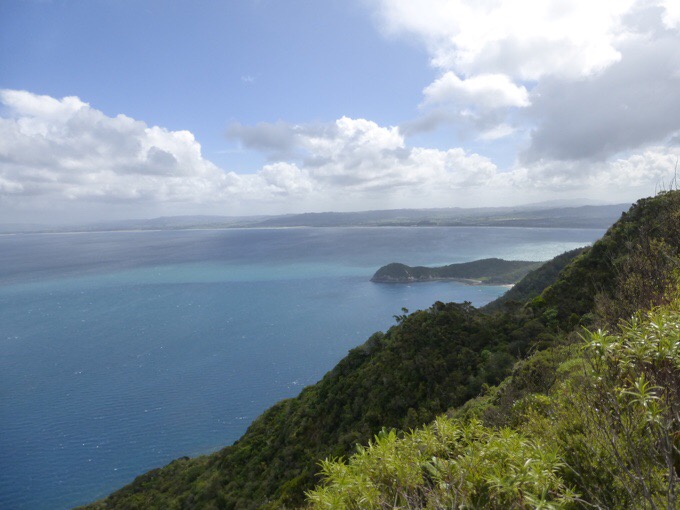 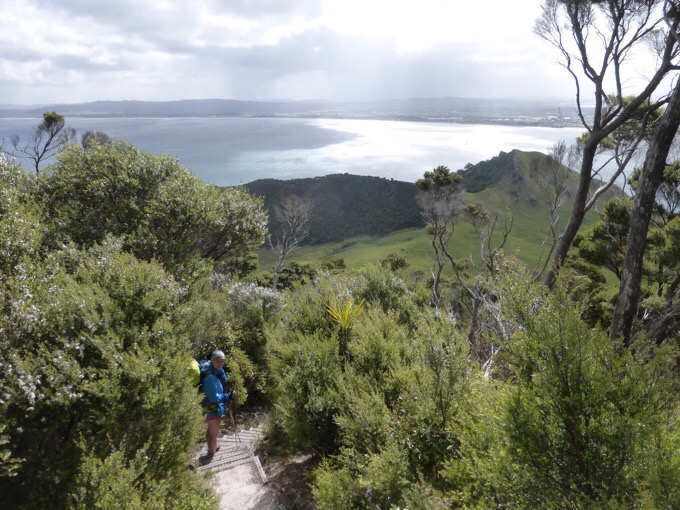 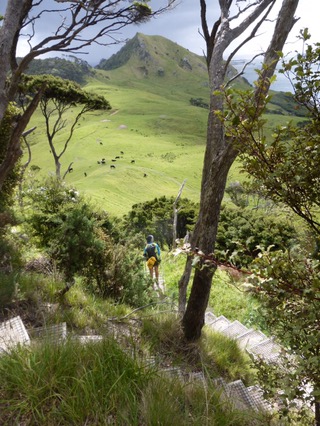 The whole way down the back side were stairs for ~1mi/1.5km. 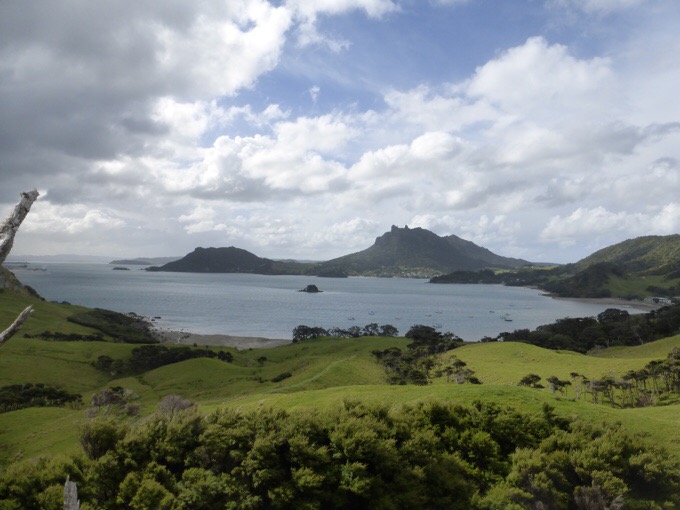 The bay we will be curving along on a paved road and needing a boat ride across.

Our trail notes kindly give options for accommodations, but give little detail, so many days, I find myself making many phone calls once we realize where we may be landing. We had hoped to get further and avoid this situation of finding camping in a residential area, but the late start and steep hiking gave us little control over that. One place I called was fully booked, but the man kindly described a field we were near that was owned by a farmer who lets people camp on his land near some public toilets and a tennis court. After I hung up, a few minutes later, a car drove up and it was the man I had just been on the phone with. Even though he was fully booked, he was offering to drive us a chunk of the road to the field he described. How nice! When we explained that we wanted to walk, he offered to take our packs for us and we again declined. It’s just crazy out here how common it is to hitch. Even when I called the boat guy to explain that we’d not be making it tonight, he questioned why we weren’t just hitching the 6mi/8km road walk. I just can’t get used to this way of thinking. 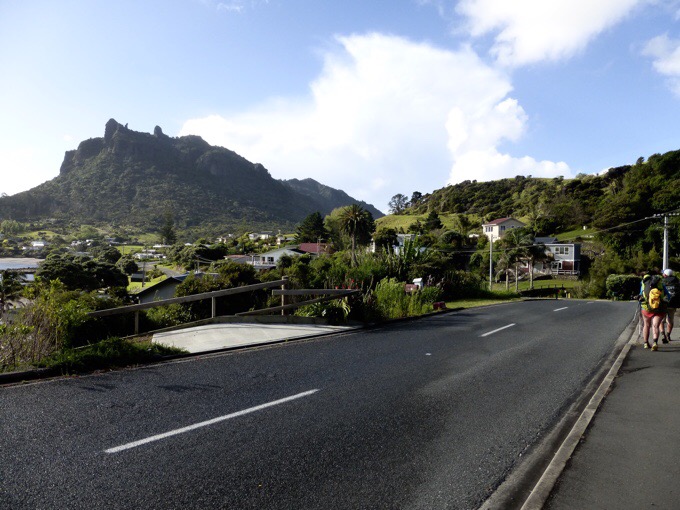 Around 6pm, we arrived at the house of the farmer listed in the trail notes and asked permission to camp on his land. He was great and very welcoming. The land was a couple hundred meters further and we were there by 6:15pm. There is even a small Convenience Store up the road, so Will and Becky excitedly went up there to finish the day with soda and ice cream.

While they were gone, Calvin and Sally arrived. They got off the Te Whara track in the middle and hitched to here. The couple that dropped them off were farming avocados and gave us some! Then we noticed that I met them last night at the end of the day, and they had offered us a ride. What a small world!

Well, that’s about it. It’s such an odd juxtaposition to be on a farm, in a residential area, with an oceanfront view, cows nearby, a paved road just ten yards from my tent, public toilets across the street, and a Convenience Store up the hill. Yep, only on the Te Araroa! 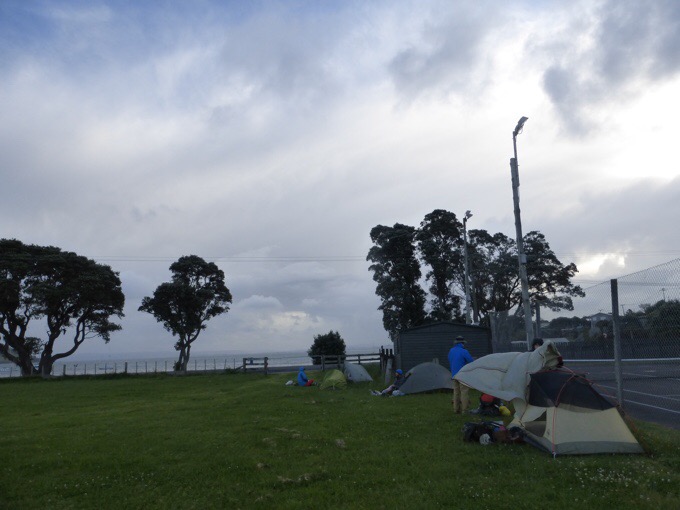