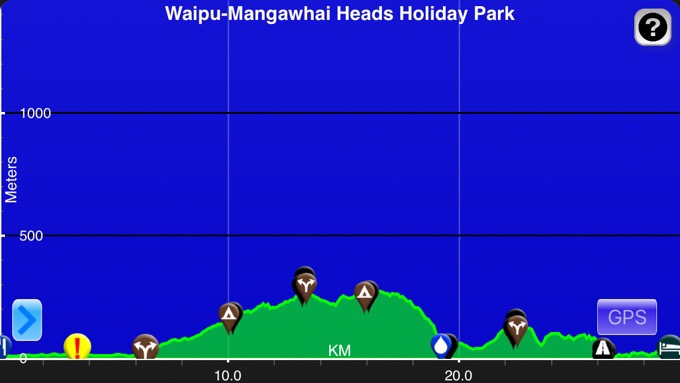 I haven’t gotten as much sleep as I’d like lately, so I’m going to attempt to be a bit shorter with today’s commentary, although it was a greatly variety day with many different terrains and interactions. As we all were packing up in the morning at the BBH Wanderers Backpackers, the owner Elaine came in to collect fees. She knew Calvin and Sally were trying to find a way to get to some nearby yet remote caves that had glow worms. There are a few of these caves along our path, but this one is the only free one we think. Elaine then offered to take all of us just for the fun of it and she even had the big waterproof gum shoes for all of us! How could we turn that down!? The Waipu Caves were about a 20min drive down a remote and windy road. It was great! THANK YOU to Elaine for making this possible! 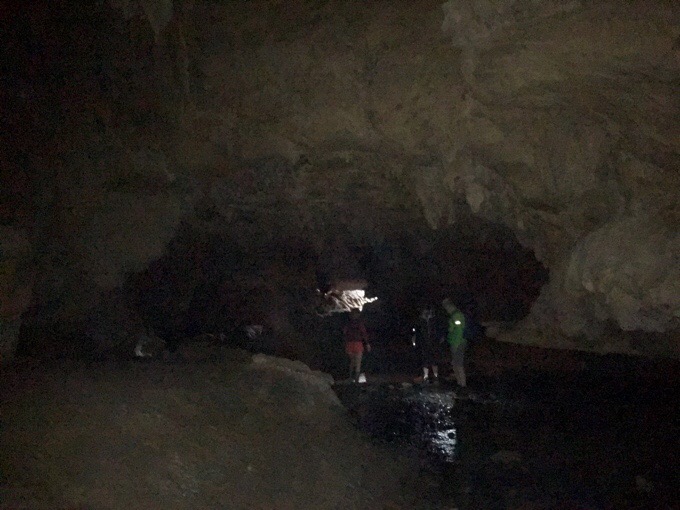 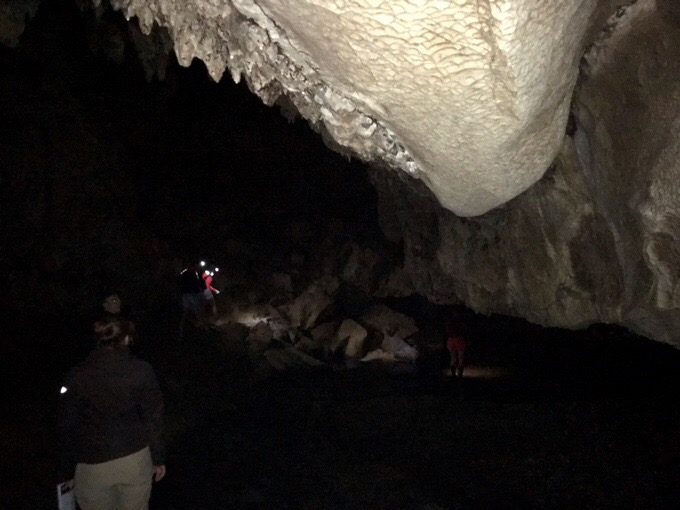 The glow worms are pretty cool. When everyone turns off their headlamps, it’s like seeing a whole constellation of little green stars overhead. 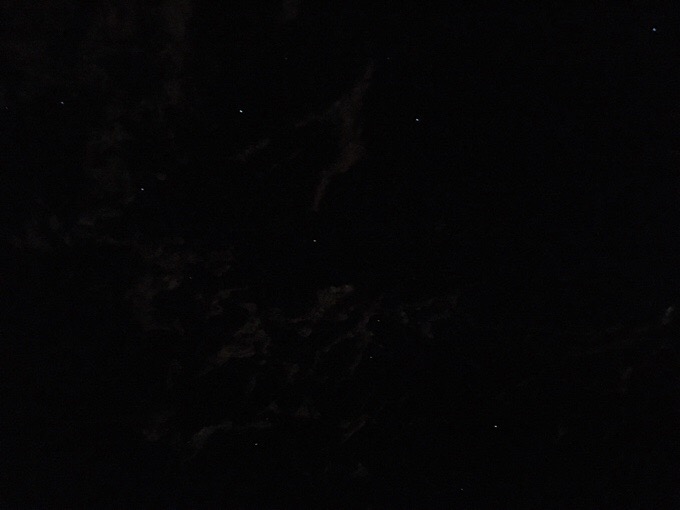 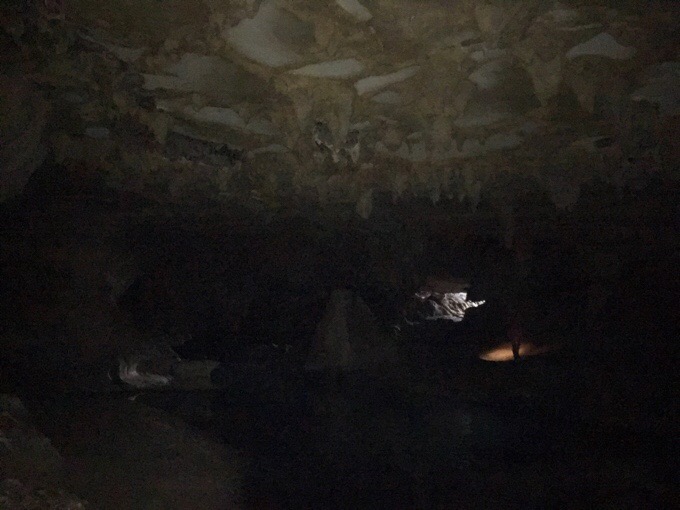 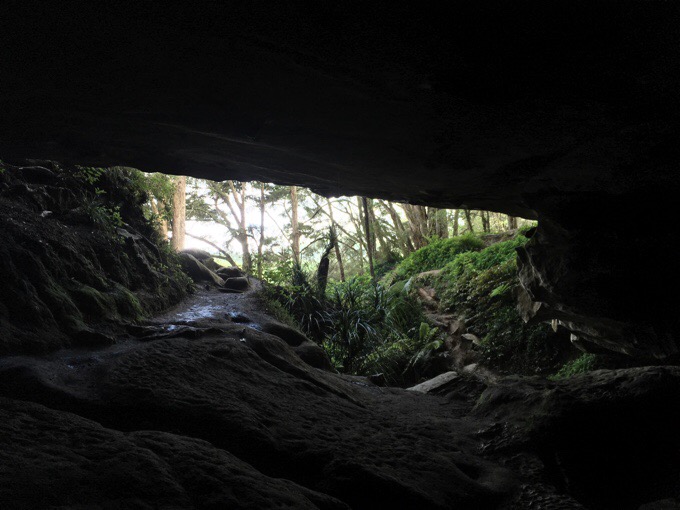 With our morning field trip, we didn’t get to hiking until 10:45am, much later than we had planned, but it was totally worth it. There were a couple hours of paved highway walking that then turned into a gravel logging road that wove up and up and up. 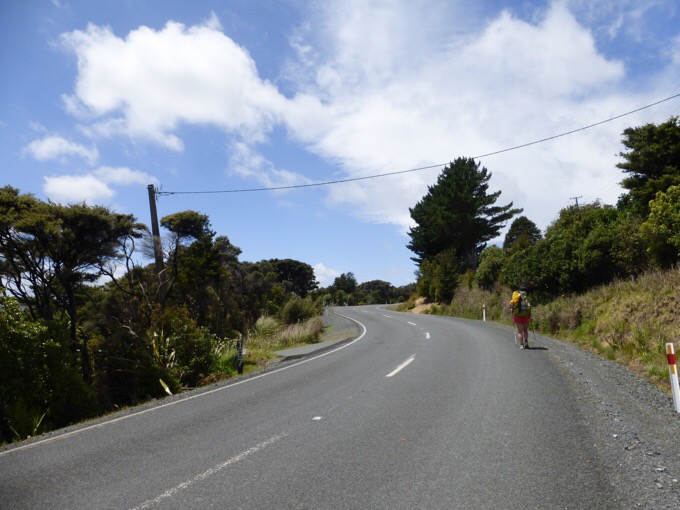 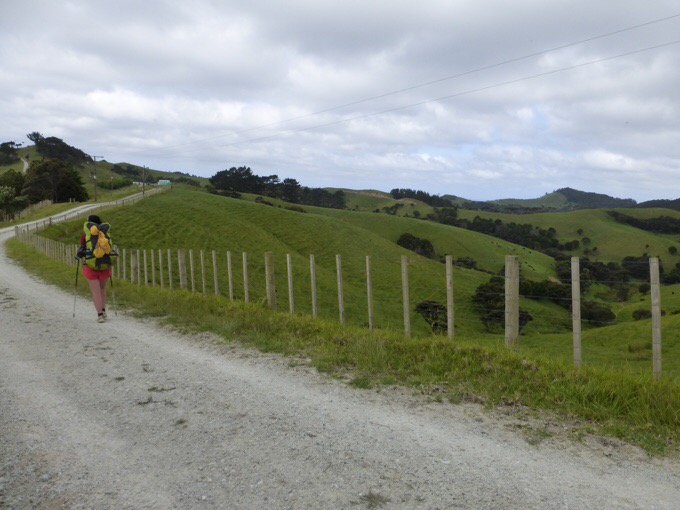 Again, headphones saved us all. I found three radio stations I was able to flip between with music I enjoy (current pop stuff) and I was really entertained. Will said he did have a “WTF moment” today that came and went where he questioned the stupidness of all the highway road walking. I think we’ve all had those moments for sure. With so many people around us hitching and people randomly pulling over offering rides, it can really mess with your head if you’re trying to reason walking this thing. There is supposedly some insanely long road walk coming up in a week and I think it’s also playing with our heads knowing it’s coming. We did get some nice views overlooking the ocean and entertained ourselves with fun photos. 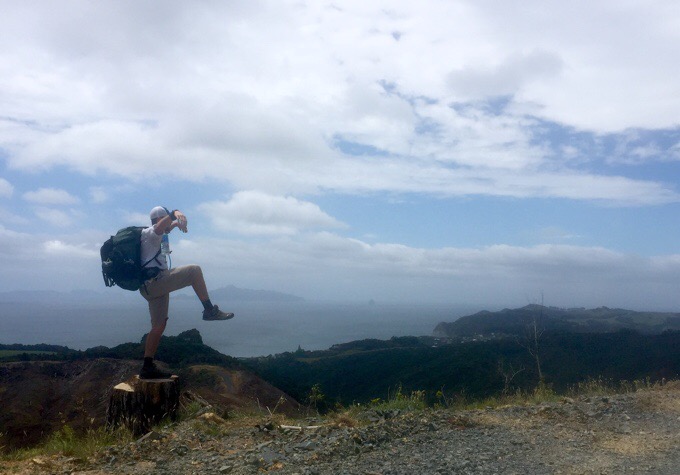 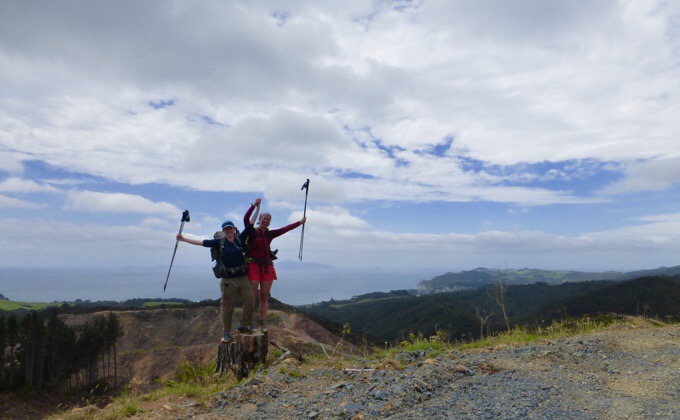 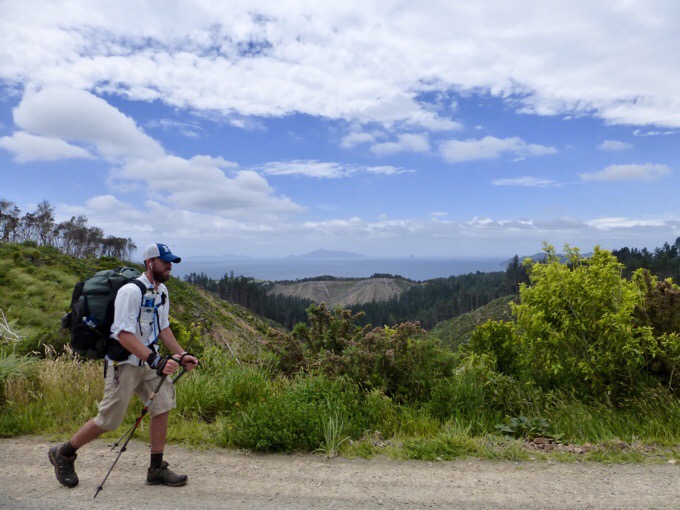 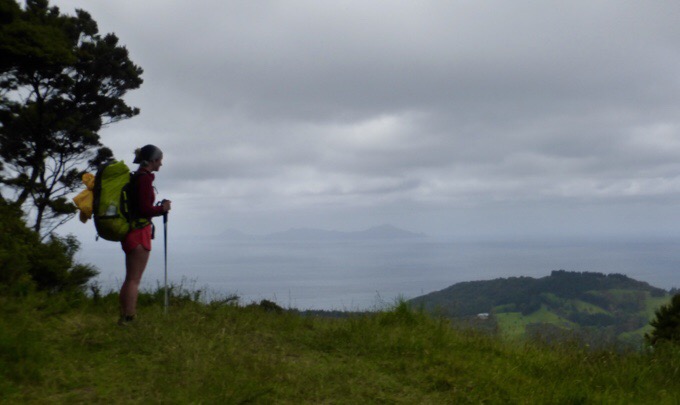 We saw our regular crew as we walked today. Having some brief conversation as we overlapped helped with the day. It was at least a morale boost to know others were toughing out the road walking. We saw all of them the second half of the day on the more forested road and actual track walking that was slippery and muddy. 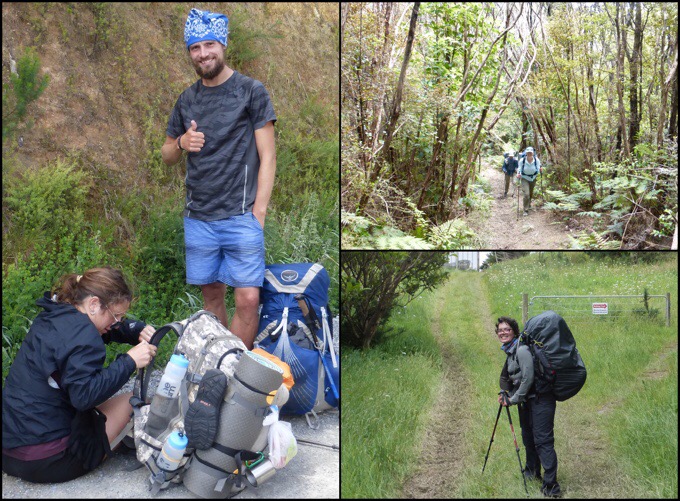 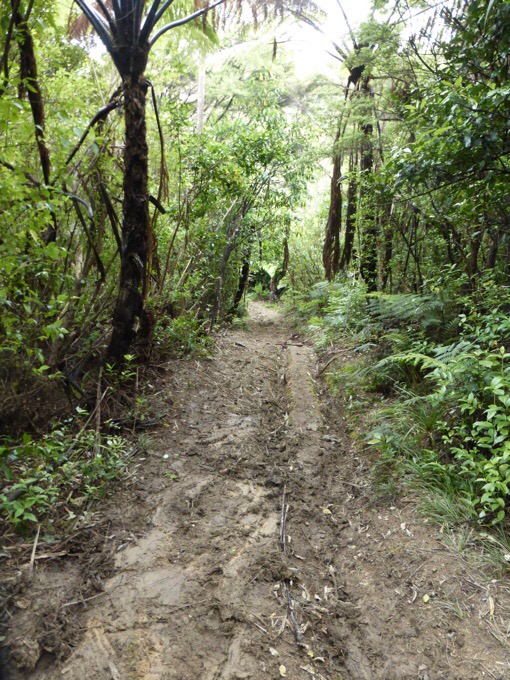 All day, I had been in contact with a hiker I met on the Bibbulmun a couple months ago named Baptiste. He is now in NZ with his girlfriend and her parents who are traveling the world on a boat the last two years. He wanted to meet up and give us some trail magic, so we all met at the end of the day after a section of sheep pasture walking that led to a nice coastal track and a walk on a beach. It was a Saturday, so many people were out and about. I will note that there were great photos today, but honestly, most of it was the road walking though the photos don’t reflect that. It can be deceiving. It was really great scenery off the road! 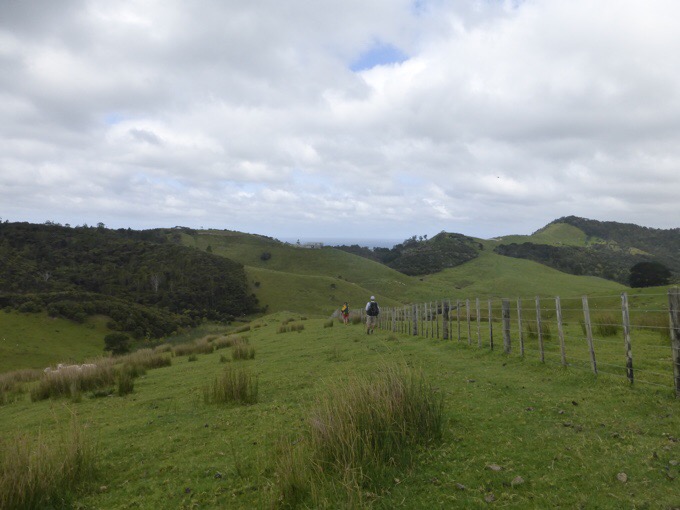 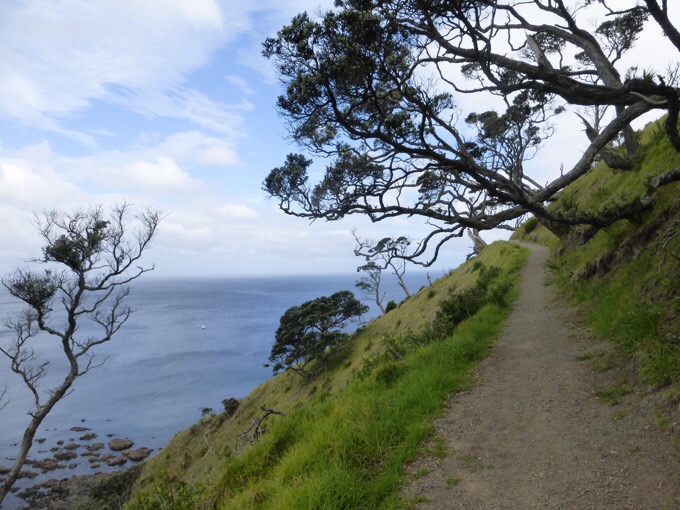 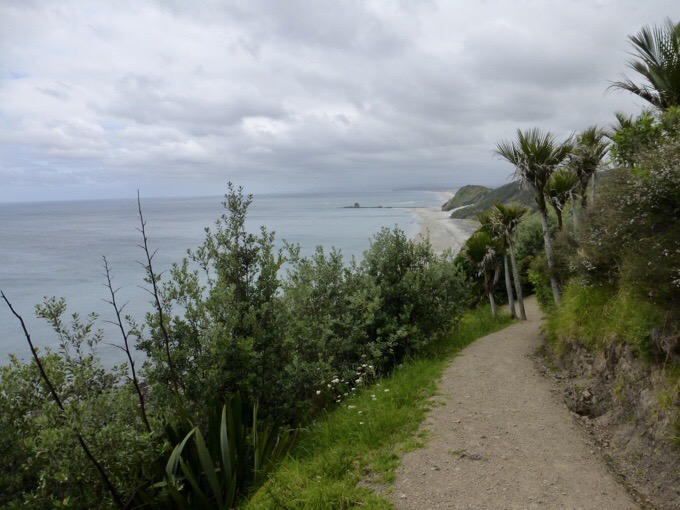 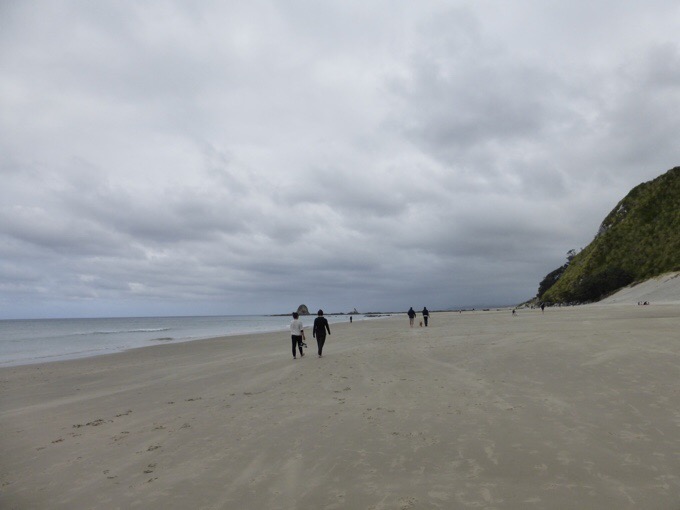 The trail magic and coastal views were a great bookend to the mostly mundane day on trail. Really lifted our spirits. Plus, it was Johanna’s first trail magic! She’d never even heard of it. THANK YOU Baptiste! 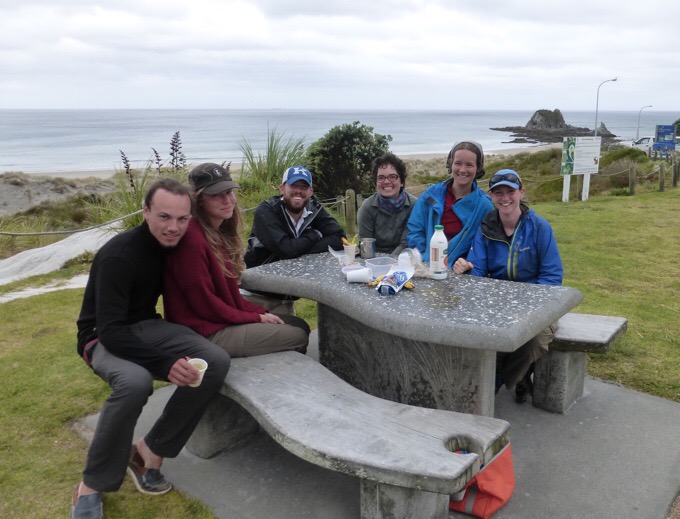 By the time we finished eating a ton of banana bread, bananas, juice, and strawberries we all were not feeling like going late another 4mi/7km to a free yard we could camp in. That was the goal so we wouldn’t have to pay $9US/$12 each to camp in an open field at a Holiday Park just off the ocean. We just took the hit once again and stopped at 6pm after agreeing that it would just wear us out and end the day poorly in possible rain if we pushed on. There’s no rush and we are still making great progress.

We spotted a space near some trees away from the 20+ other weekenders and pitched there protected from the wind. It even rained and we didn’t feel it. A great spot! Emily and Bill arrived and joined as well. There are two others TAers that we have caught up to in the big field as well. 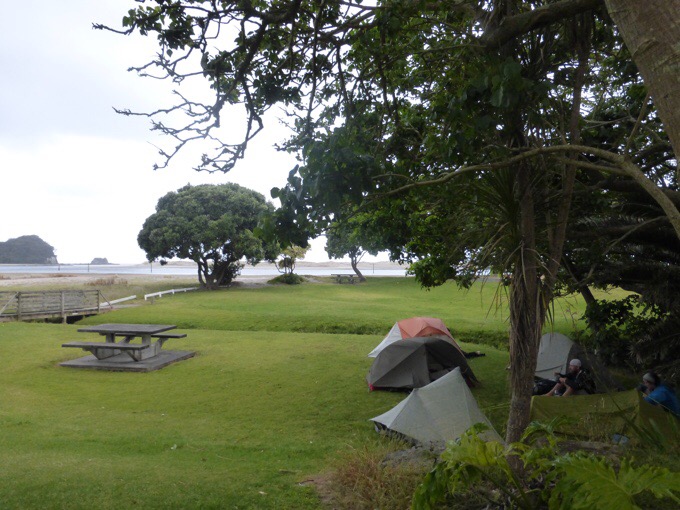 Five tents huddled under the trees.

Will and Becky have made it some record number of days with a sofa and were able to hitch to a nearby convenience store to get their nightly fix. It was fun interactions as we all are snug under the trees and dry. Good thing we stopped. I’m excited to maybe catch up on some sleep.