Day 18: The Long Road To Auckland 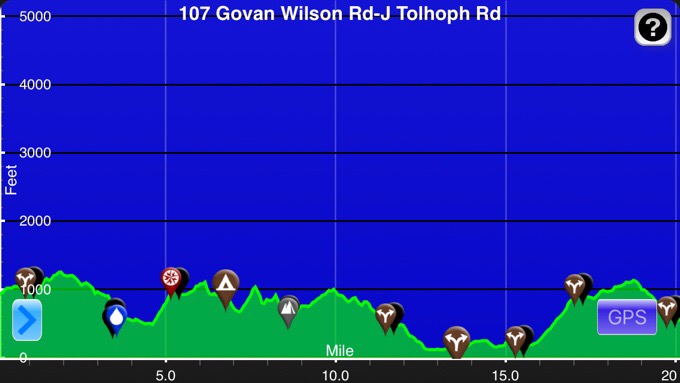 After a long and tiring day yesterday, we ended up having a slow start today. These back to back long days are routine for me, but not for Will and Becky. They slept hard and I didn’t wake them. I was able to get in the shower I was too tired to take last night and I got the blog posted. Matt came out and brought everyone coffee. He’s really a great host and I look forward to seeing how his place evolves in the coming years to host walkers.

We hiked out at 8am. All four of us set off for the Dome Forest. Yet another rocky, rooty, and muddy roller coaster experience. It felt like it took longer than it did with all the mud and short ups and downs. The main summit was towards the end of the forest and called Dome Summit, but it was deceiving with more ups and slower terrain than expected. It was mentally draining knowing we had many more miles ahead after the forest. 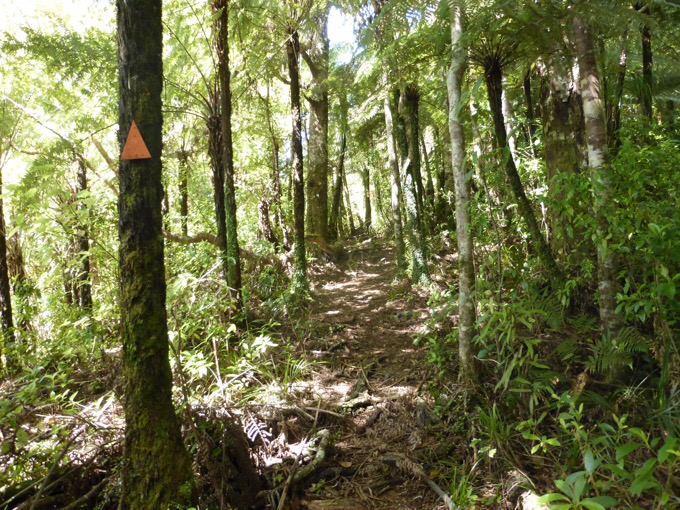 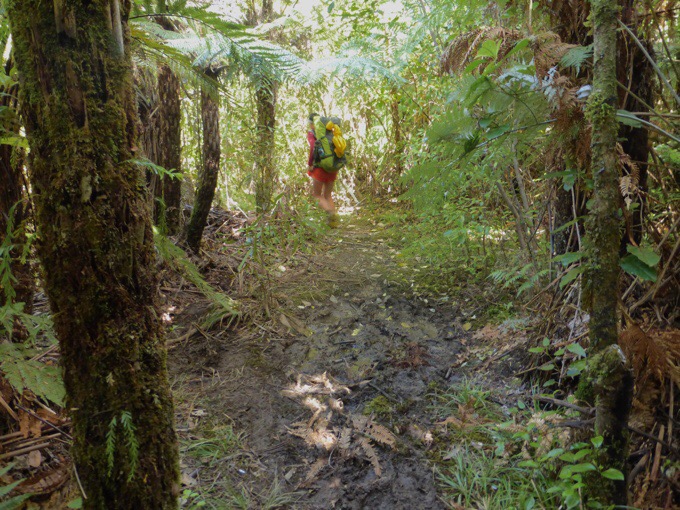 We exited right into civilization. The .6mi/1km down from the final lookout spit us right out to the parking for the Dome Cafe. It was pretty ridiculous how well that short bit of trail was constructed since that little bit is often hiked by people visiting the cafe. There was hardly any mud, a flat wide gravel path at times, and steps built into the muddy hillside. Someday, the TA may be fully maintained like this. It has already improved greatly since my friend Buck-30 did it in 2011. When I read his descriptions of some stretches, I can tell that there are improvements. Some would say they hope that never happens, but I for one am in favor of a more maintained trail through these forests. Instead of spending so much energy on staying upright, people could actually take in their surroundings and enjoy what they are walking through. I’m a forest fan, but not these forests unfortunately. It’s more like a Tough Mudder obstacle course that is quite draining when it doesn’t have to be. The end towards the summit had nice trail that reminded me of the Appalachian Trail. 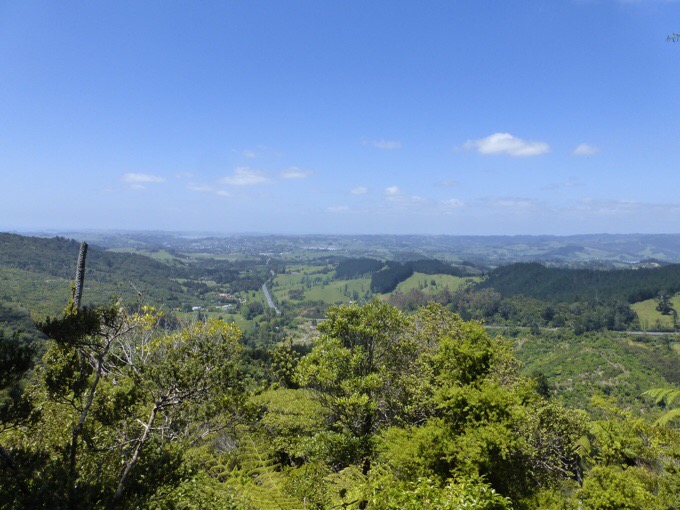 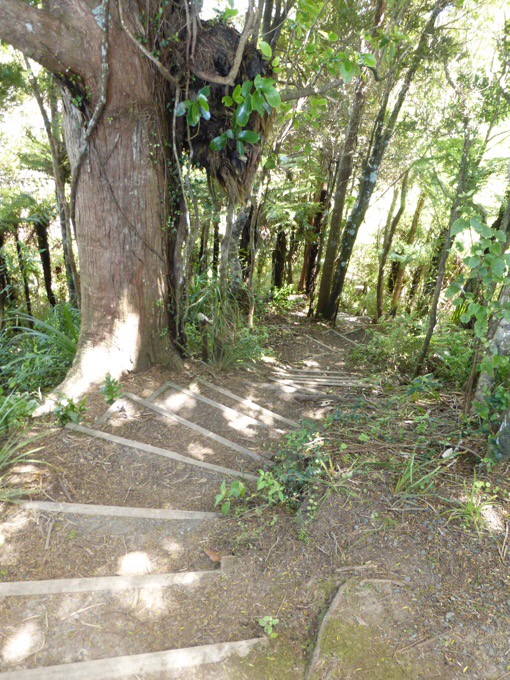 It was noon when we got to the cafe and we all had planned on lunch there. After such a rough morning, we all agreed we deserved whatever we wanted. Our legs and shoes were caked in mud and we were pointed to a hose by the cafe to rinse off. They must be used to this, ha! It was like rinsing away a bad dream and felt great to see my shoes and legs again. We left our shoes in the sun to dry while we ate.

Awhile later, Nathan arrived. His foot injury was not doing well, so he exited at a road and walked the road to the cafe. That is one thing about the TA up north. There does always seem to be a road to jump on if need be. We all ordered the Deluxe Burger which had bacon, egg, and beetroot on it. Will, Nathan, and I each got a milkshake (I’ve learned you have to order them thick if you don’t want it to be like milk in NZ) and easily downed it all. The meal also came with fries and onion rings. We all were stuffed and it was 2:15pm by the time we finally walked out. 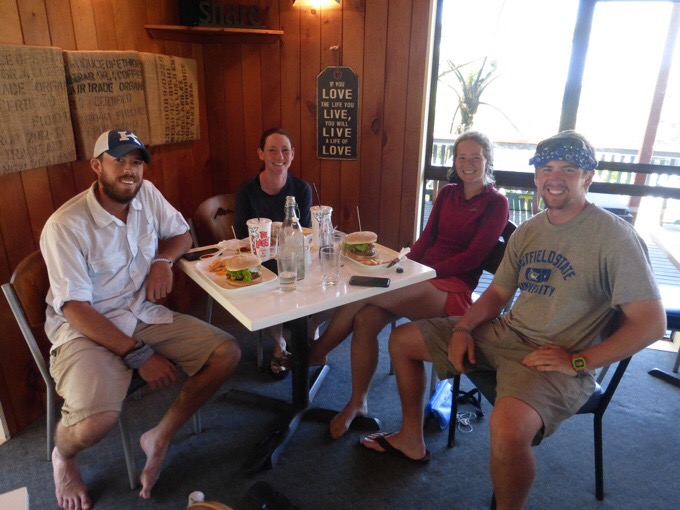 We still had 12mi/19km to our planned camp spot and that seemed like quite the arduous task for starting in the afternoon. There were shorter options, but we need to be properly setup to do a river crossing at low tide in two mornings. Since we have to be there at low tide, we had to set the previous three days a bit high to make it at the right time. It was either that or do four short days and we agreed we’d rather try to make it in three. The four short would have landed us in towns at high priced motels or campgrounds because we are so close to Auckland. I do have to say that everyone hosting or allowing hikers to camp in their yard for a small fee is really kind, but overall it has to be my least favorite part of this trail so far. One of my favorite parts of thru-hiking is camping alone in the wilderness away from civilization. I have had that happen just twice on this trip so far and it makes me sad. I miss it greatly! 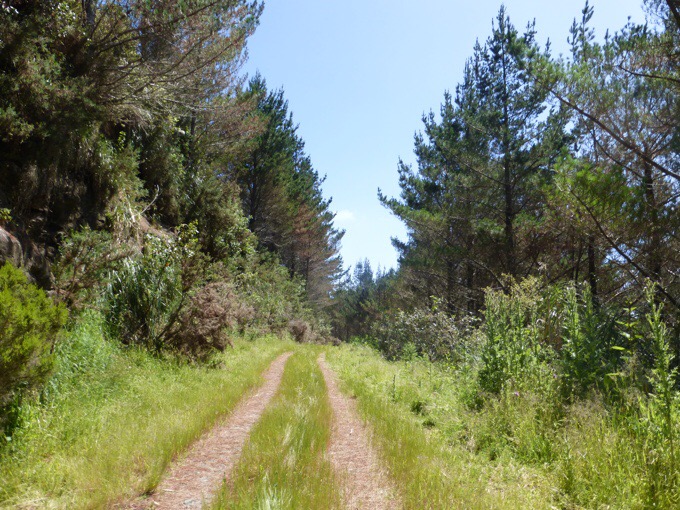 We had basically 5hrs of farm road walking. It was relaxed walking and I listened to another podcast of Sounds of the Trail. It was a really good one that touched on one person’s struggle with staying on the Continental Divide Trail or going home. I like listening to Sounds of the Trail while I’m out here because it reminds me why I do this and that there are many ups and downs, but thru-hiking is such an amazingly freeing experience. I recommend the episode I listened to if you are looking for one. I ended up handing it to Becky after I finished and she listened to it as well. 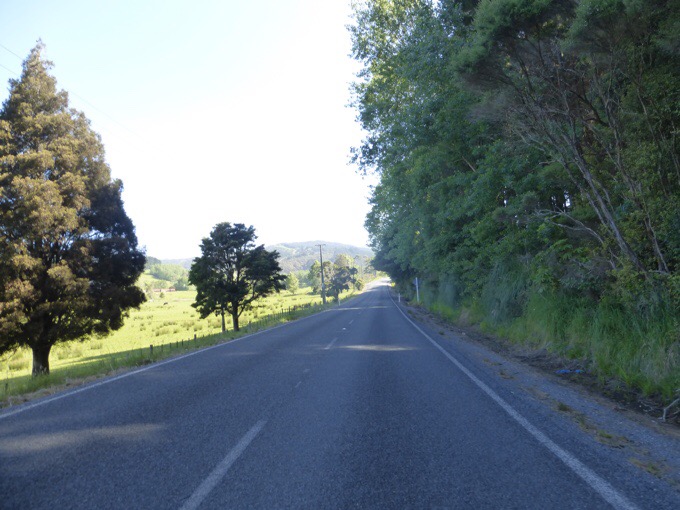 It’s been a tough leg for Will. Yesterday was long and this morning was not the best terrain for his hips and joints. He drug a bit on the road walk and we could tell he was trying to work through the funk of another long road walk. When we got to camp later, he said he thinks he might be done. He’s here on a 12 month working visa and would rather even be working than doing this. He’s right. He came here to have fun and isn’t having fun, so why do it? I’ve been telling people I’m here because I’ve done so many other trails worth doing and this one was just next on the list. I knew it wouldn’t be my favorite with it being less remote, but I do think it’s where I’m meant to be at this moment. If someone hasn’t done the other ones, they might want to do those first. This is more like the Camino on steroids and the Camino isn’t on my list. That doesn’t mean it wouldn’t be enjoyed by others. Everyone has their own likes and maybe this is just the “trail” for them. It just isn’t for Will so far and that’s understandable. 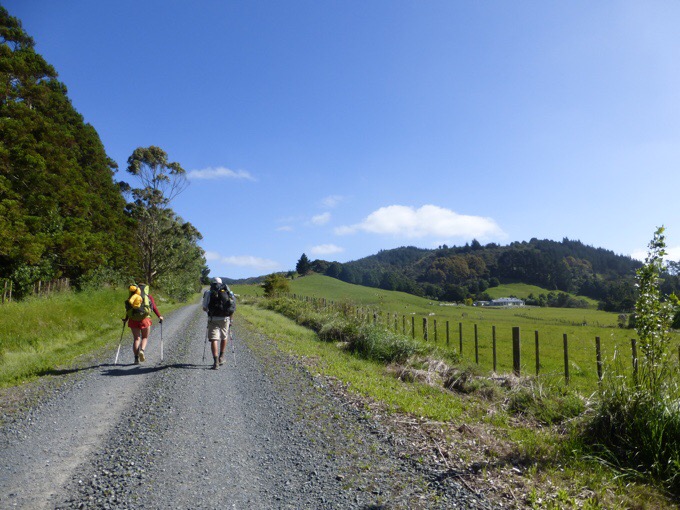 Will has been on the PCT, so he knows what a quality wilderness trail is. The comparison is stark. It’s just different, and if someone is looking for a wilderness experience, this isn’t it on the North Island. Will is going to hike with us into Auckland probably and then take a couple days off to assess. Many people have done this and I totally get it. He is thinking, like many, that maybe he’ll work some and then do the South Island, which is much more in the wilderness with mountains and longer stretches between civilization. What we are doing up here, a tourist could easily do in a car for far less money and effort. I personally like hiking because it takes me where a car or bike can’t, and there is very little of that so far. I know it will improve as I head south, so I’m sticking it out for the whole TA experience. I totally get Will’s position though. Why do something and deplete his bank account on something he isn’t enjoying. He is younger and has limited funds to enjoy this time before he starts his teaching degree. He is free to choose and was just doing the TA to have fun. If it isn’t fun, than why not move on to something that would be more enjoyable with the limited time and funds. So that’s where he’s at for now and it’s a common discourse out here for sure. He’s going to take a couple days in Auckland when we get there to think about it. 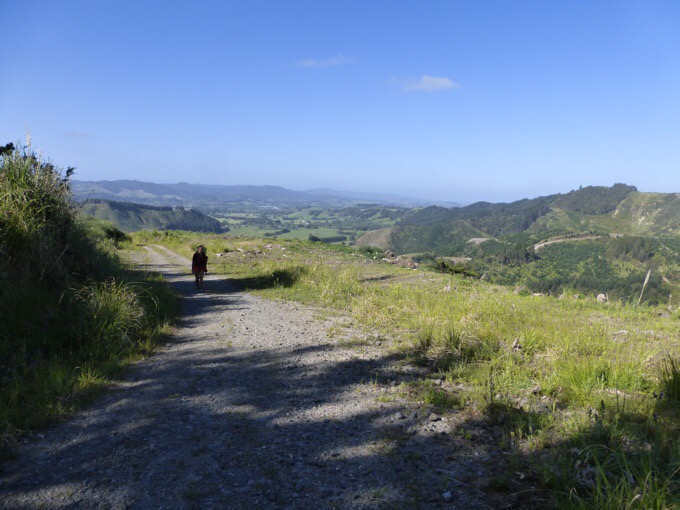 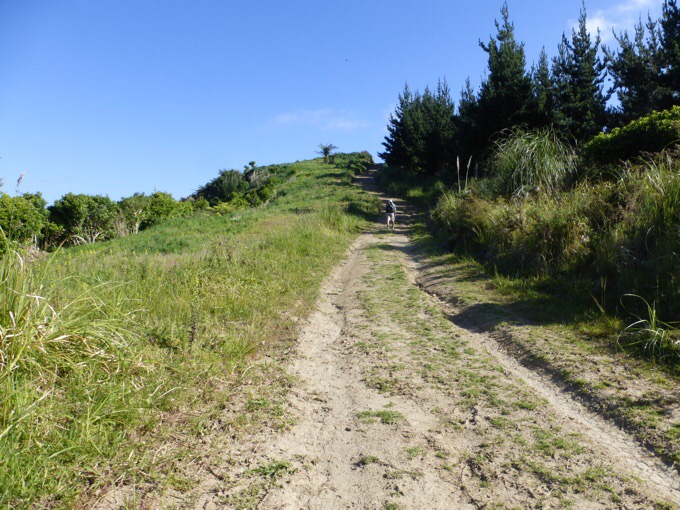 At the end of the day, we were nearing a possible camping area listed on the Guthook App, but it was really windy and it looked like we were headed up a hill to an exposed field just outside a private residential area. As we walking by a home, an older woman named Noelynn waved and said hi. She said we made a dozen walkers she saw today while working out in her garden. She has had walkers camp in her yard, which is more protected and kindly invited us to camp there. I had been pretty excited all day to finally camp away from civilization, but we were so relieved to get a more sheltered spot! Noelynn even invited us in for a warm drink and homemade cookies. She was so sweet! 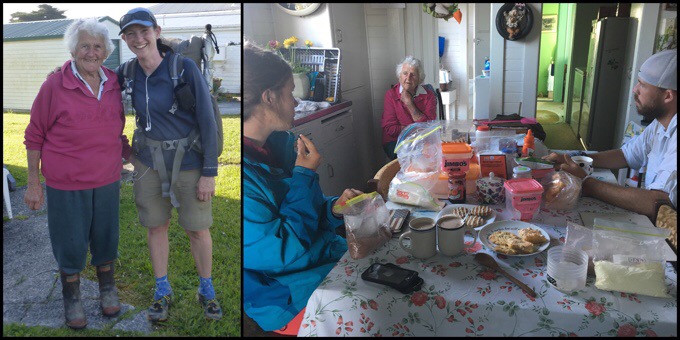 Noelynn has lived here for 63yrs and raised six children in this house. She told us about other hikers she’s had stay in her yard and even home over the last few years and loves having the path go by her home. It was a nice end to the day and the three of us are camped in the grass. It’s already a bit damp with condensation and the wind has died down, so I’m expecting a pretty wet tent and gear in the morning. Another long day of road walking through many towns tomorrow. Two more days to Auckland! 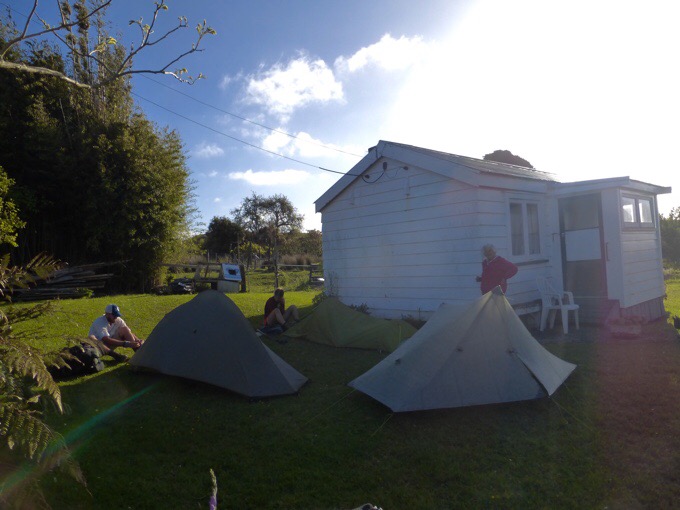