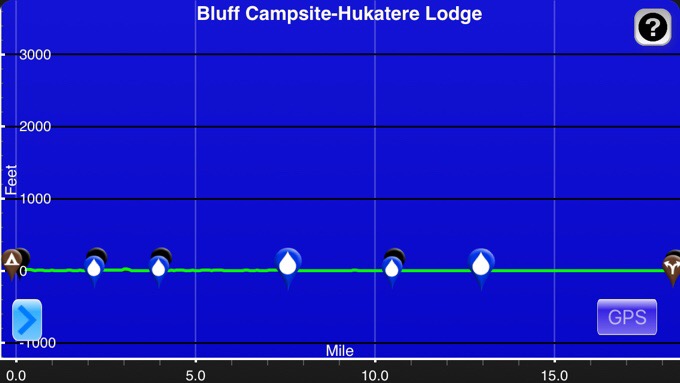 So let’s talk about the phone service before I get started with today. The company I was told to go with is Vodafone. Their deals are definitely not as good as Australia. In Australia I was able to use Telstra and the deal that I was able to get gave me 1000 minutes of calling to the US each month, 3GB of data during the day, and 3GB at night. The deal here is that you buy a SIM Card that lasts for two months and it has just 200 minutes of calling to the US, unlimited calls in NZ, and 4GB of data. That means I will be making much fewer calls, using the internet a lot less along the trail, and more when I get to town with Wi-Fi where it will not use my data. Also, there just isn’t as much reception out here as there was in Australia, so I may not be able to post as often even if I wanted to. The point being that posts may be coming in groups of 2 to 4 at a time instead of one each day. Frustrating on both your end and mine, but that is what it is and I will post them when I do get service. Just to let people know, I was able to get that for cheaper at the airport than anywhere else and it is what I was told the best deal I would be able to find. I went ahead and bought two SIM Cards figuring that I would use the 4GB before the two months were up and the recharge for data is way more expensive than just buying a new SIM Card that would start another two months. I’m already greatly missing the pretty much unlimited calls and I have horrible self control with the data. This will be interesting…I may just keep buying SIM Cards, ha!


OK, as for today, it was a perfect night of sleep with the ocean and the pine needle covered ground. I woke up at 5am without the alarm, and it was quite dark outside, so I finished blogging and worked on the photos from yesterday. I got packed up and Dan was headed out at the same time as me, but I needed to run to the restroom, so he went ahead and started hiking. I was happy to get a jump on the dozen of hikers today. With this beach walk it could be entertaining to walk with others, but I really do have enough in my head and podcasts and such that I am really enjoying the time alone. This and road walking may be the only relaxing mindless parts of this trail, as it can be quite physical and challenging, so I am trying to absorb this while I can and really enjoy it. As I mentioned yesterday, there is a restriction to camping along Ninety Mile Beach and they ask that you only use the designated places. That means that today would be an 18 mile day to a lodge and campground or a 29mi day to something similar, but pricier. I’m in no hurry and the sand walk has been more like concrete with how hard packed it is, so I have no problem with choosing the shorter option like most all the hikers I camped with last night. 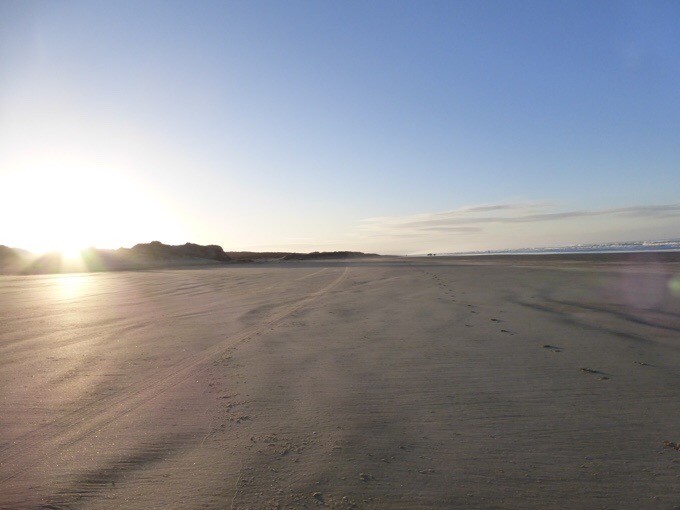 It was quite a humid morning. A couple days ago, the forecast called for rain or thunderstorms today, so I wanted to be sure to get an early start even though it was a short mile day to hopefully walk more in good weather if it does turn. I spent the first hour seeing the dot of Dan about 300m ahead of me. I chatted with him a bit while he stopped for breakfast. We saw another hiker in the distance approaching and I used my camera to zoom in and see who it was. It was Felix(Ink) and I accidentally got a great shot of him with the waves crashing behind him that his girlfriend will love. He is suggesting the blog to her so she can be more connected to what his experiences are like out here. Know you are missed Jill. 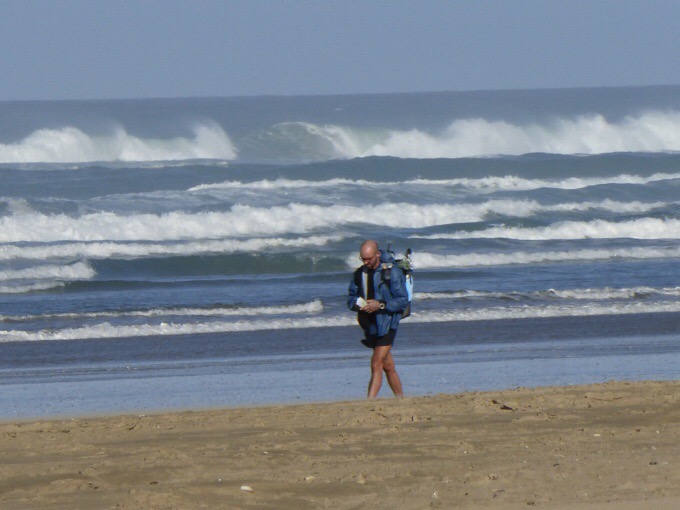 Felix and I walked together for the rest of the day, and it went by quite quickly while chatting. Yes, Felix is covered in tattoos, but he’s real humble, down to earth, and a silly sense of humor. 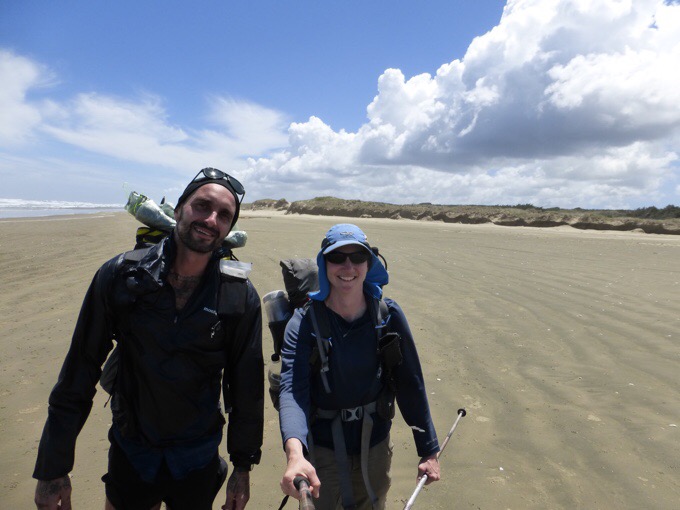 There are many people out here who fish, so there are trucks and large vehicles going highway speeds on this beach because the sand is so hard packed. It is very odd to be walking alone on the beach yet have a car randomly come by at highway speed like it is normal. 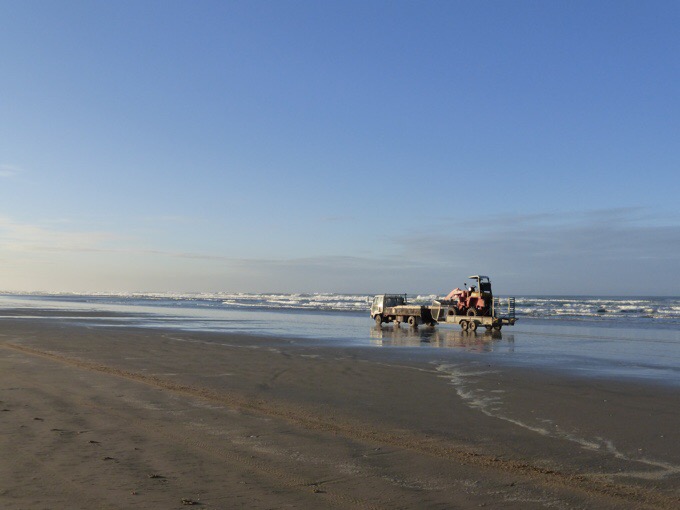 I could totally imagine some people hitching this beach no problem! I do like that this is not a deep sand slog, but it is slightly hard on the joints and muscles. Many people last night had blisters and aches and pains. Both Felix and me are fairly light and tolerate pain, but definitely have more pain than usual hiking. We both had the same pain in the back of the knee last night that seems to be okay today, but we were both plenty sore to be done after the short day today. 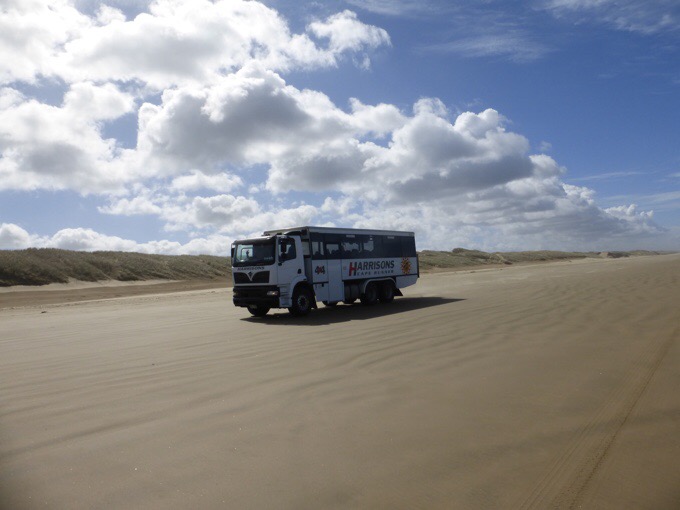 There are even tour buses that drive down the beach!

There was a pretty good tailwind behind us today as weather is definitely moving in. If that wind was coming at us, it would have been a totally different story. The wind was blowing the sand around to make cool visuals. 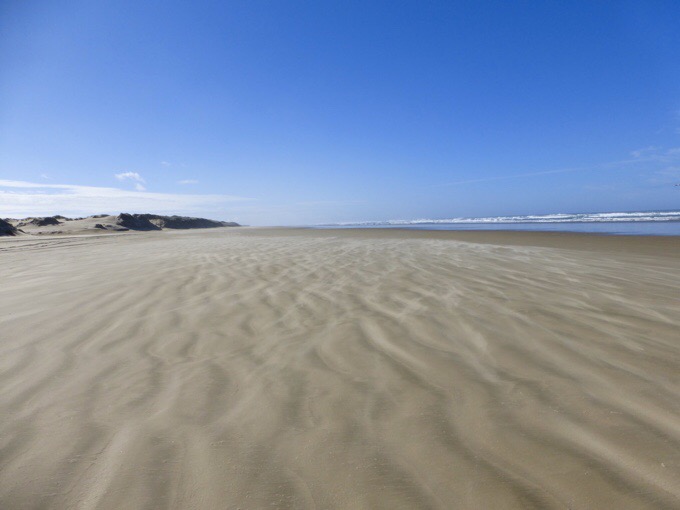 I got service and was able to check the weather. The chance of rain is going to increase as the day continues and there is supposedly a 100% chance of hard rain through the night tonight. It was interesting to see the clouds forming inland, but it wasn’t coming over the ocean. They just hovered right off the beach. 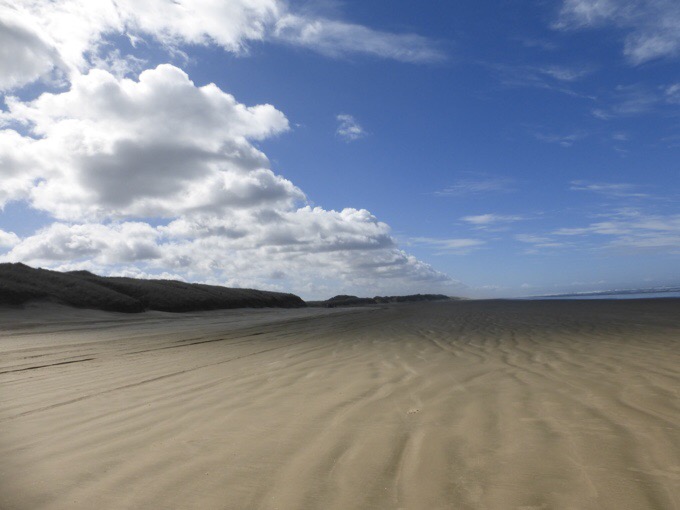 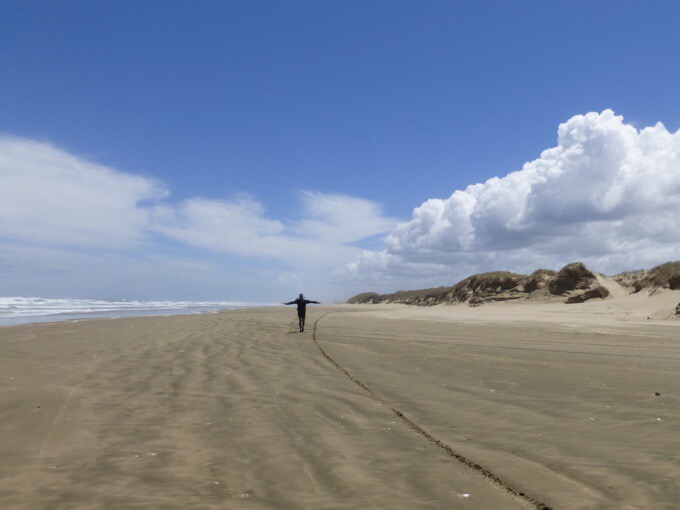 Felix and I were the first of the group to arrive at Hukatere Lodge (Utea) at 1:40pm. The next camping option would have been another ~4hrs of hiking, so I was happy and relaxed with this option and feel no need to make the beach into a death march. It was slightly confusing to spot the place off the beach because there isn’t an obvious sign with the name Hukatere. Look for flags high up on the dunes that say Australia and Utea. There is no need to climb up over the dunes. Just walk past the flags a minute and turn into the dunes where you can walk up the road back towards the flags. It’s odd that all the resources call it Hukatere Lodge, but their big signs say Utea, which is Maori for journey to heaven. That’s a note that would have been helpful on the trail notes. It is $10 to camp on the lawn and $15 to be in one of a handful of cabins. With the heavy rain forecasted, we easily chose the cabin and saved a spot for Arisa to join us. Felix hiked much of yesterday with Arisa and the three of us are a good fit. It’s nice to have people around with similar energy and temperament. 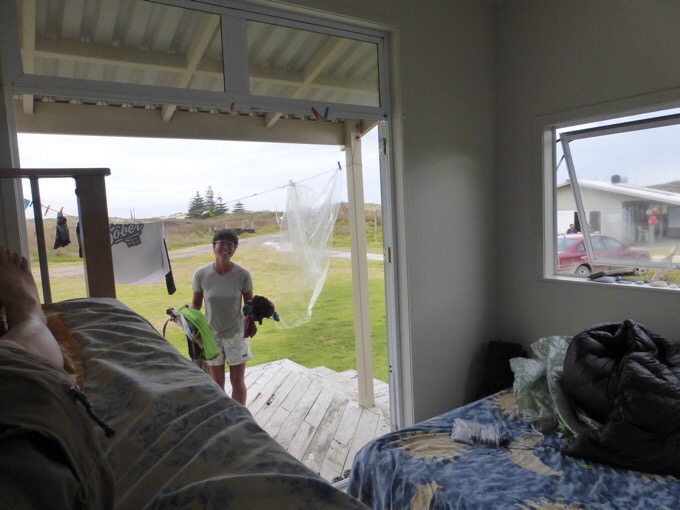 Arisa and my view from my relaxing top bunk. 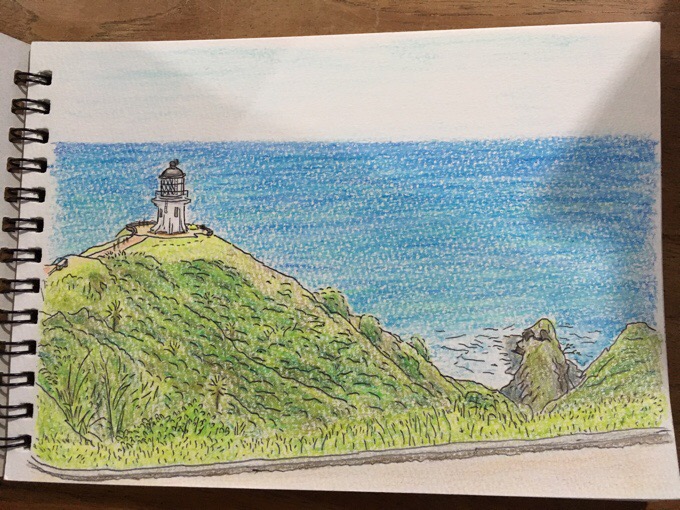 Everyone else from camp trickled (or hobbled) in as the afternoon continued. All stayed except the French couple (I’ve yet to get their names) who chose to hike on. Many should do the remaining 32km/20mi to town tomorrow, but some have blisters or pains from this hard sand walk and are having a rough time. It seems so simple, but it’s deceivingly tough on the body.

It’s pretty great here at Utea. With showers, a kitchen, some food for sale, and really nice owners who are Maori. It does run off solar so electricity is minimal and our cabin has no lights. We have the big bay doors wide open letting the fresh air in as it rains outside and it’s really great.

So, technically over here, it is November 6, which is my birthday! Awhile back I asked my roommate to send a box of things I wanted for New Zealand, and in it were a bunch of Little Debbie Cosmic Brownies. I was excited to be able to celebrate with brownies for my birthday, but of course the package did not arrive when it was scheduled. The good news is that now I get the shipping for free and it was pricey. It is being forwarded over to Claire’s place in Auckland and I will get that package in a few weeks. I think the brownies may expire by then, darn. The good news is that on my actual birthday, which is tomorrow, I will be in town and I will find some kind of treat for myself.

My birthday isn’t a super big deal to me, but I do like getting a special treat at least. Ever since I moved to Portland over 6yrs ago, I haven’t felt like it’s my birthday anyway because I had always celebrated with my identical twin the first 30yrs of my life. It feels very weird to celebrate something just for me and I don’t like that center of attention thing, so I don’t like to do anything major unless it was both of us. I was super happy that I got service today because I was able to Skype with my sister and nephews. My sister was celebrating our birthday today because she had a busy day with the kids planned for tomorrow. They had a big chocolate cake and the boys sang happy birthday and got to blow out the candle with my sister. We are 38yrs old, but my sister only had a “4” candle, ha! Notice how my youngest nephew is blowing kisses, so cute! 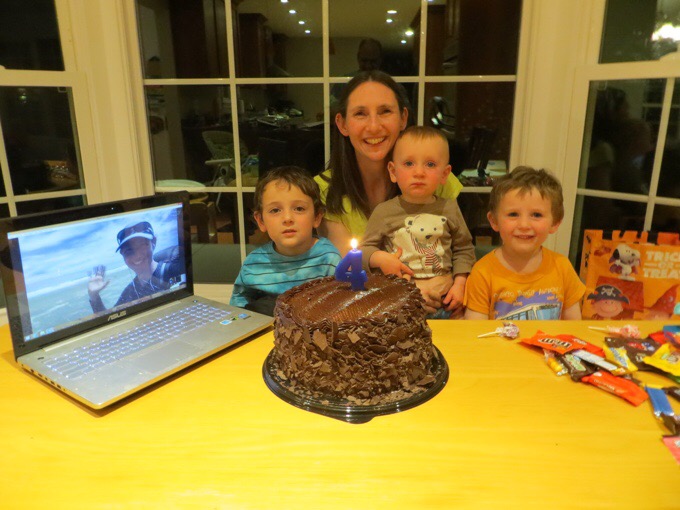 That cake is 7lbs! 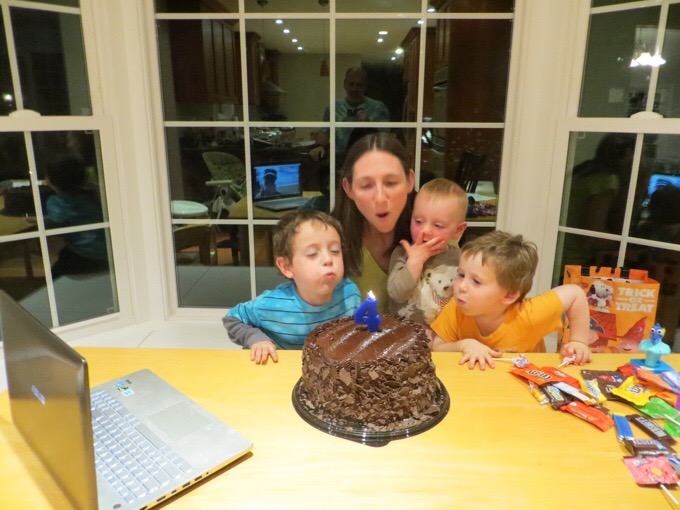 That Skype was all I needed for my birthday. Well, that and something chocolatey in town tomorrow!