Day 31: Over The Hills And Through The Mud 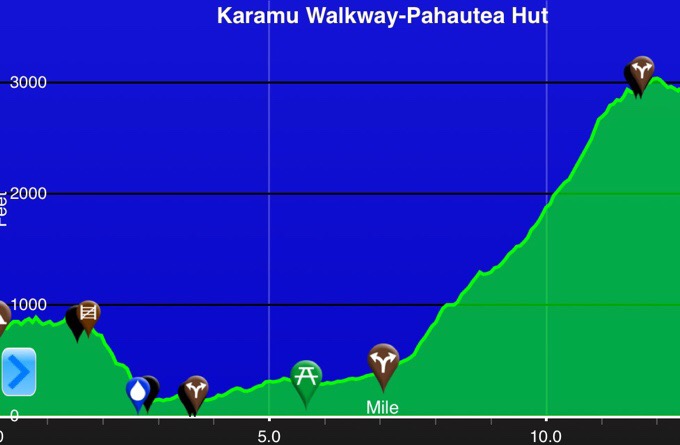 Before I start today’s post, I want to mention an important addition to yesterday’s post that some of you may have missed. It was added before the email went out, but not until a few hours after I initially posted it. I’m posting it here to clarify my thoughts on the prevalence of hitching out here and how it has impacted my experience out here. Hopefully this will explain my perspective on skipping trail a bit better.

It’s difficult to explain it, but it’s not necessarily a judgement as a feeling. There is a unique bond among people on thru-hikes that comes from a shared common experience. You may not have done each section together, but there is that immediate bond when you know what the other has been through and that you’ve been through it too. You know how hard you have both worked to be where you are and it is unsaid. There is a bond in knowing that you’ve both set out on something that will be both physically and mentally challenging. Knowing it won’t always be easy or enjoyable, but that those difficult times are what make the good ones that much better. That bond and understanding just isn’t as strong with people who aren’t walking the same path. It’s like meeting someone from the same state you grew up in vs someone that grew up in the same town. What I’m trying to say is that I miss that bond out here and I wish I could experience it more.

Now back to today…

*Note: Anyone who checks the Where’s Wired map will notice that I accidentally left the inReach device on all day apparently and it tracked my full day, oops!
I slept pretty hard last night and Becky did too. I fell asleep writing and somehow slept through the night with things in my tent out of order. I somehow wore my down jacket through the night and still had my head propped up on my clothes bag, which is what I do while I’m writing. I woke up at 4:30am having somehow slept through the night, which is rare for me. I stayed awake and finished yesterday’s blog post. Becky usually gets up before me and I hear her rustling around, but not today. I had to wake her for the first time. With Becky’s new gear comes a new packing routine that she needs to adjust to, so we started a bit later than usual just after 7am. Everyone else was still in their tents when we left, except for one section hiker having coffee. The morning hiking had wet grass and uneven terrain from sheep walking in mud, but it was a great morning to hike. 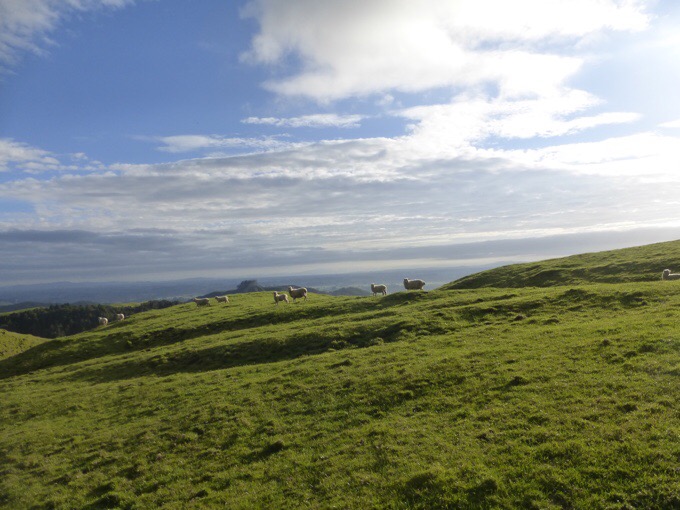 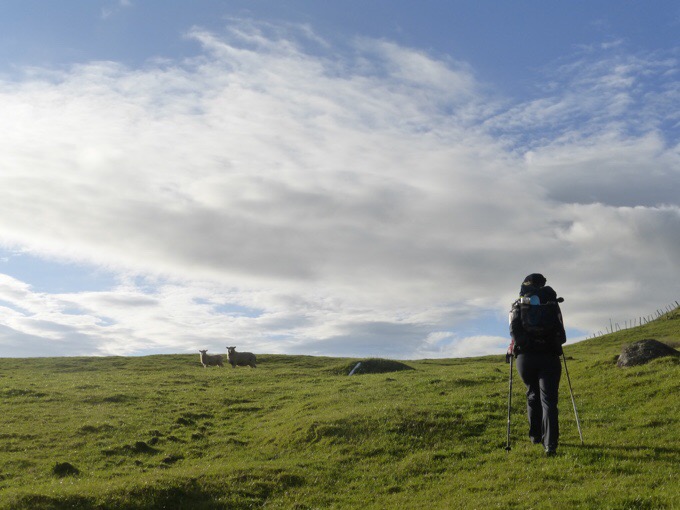 We had a relaxed schedule because our end destination wasn’t far away. I compromised to doing two shorter days so that we could a) stay free at the first hut on the TA that takes the hut pass many hikers buy; and b) split a difficult section into two days. Today was our highest point yet, the Pirongia Summit at 3146ft/959m. We were only just above sea level when we started the climb, so it was a lot of elevation gain to the summit. The whole day was great and felt like we were actually hiking a long trail! 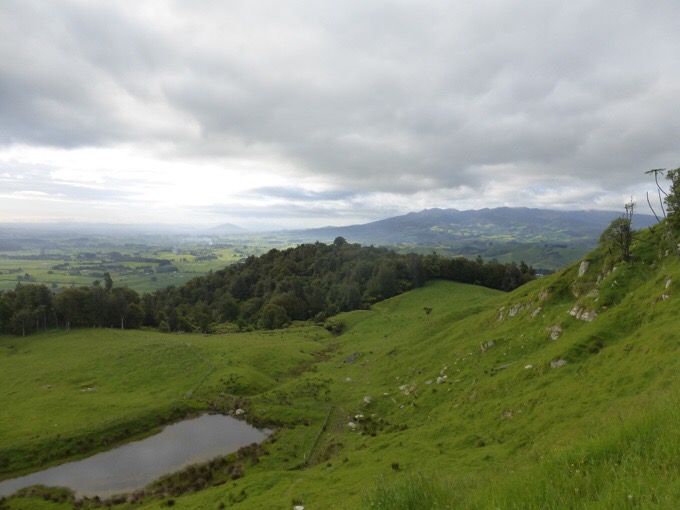 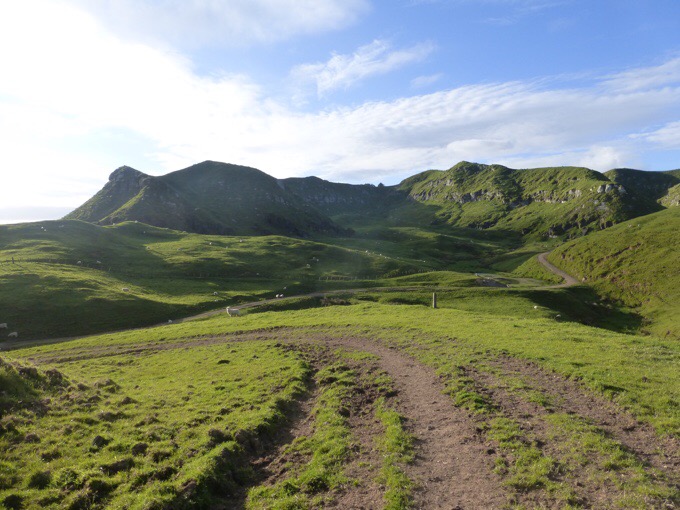 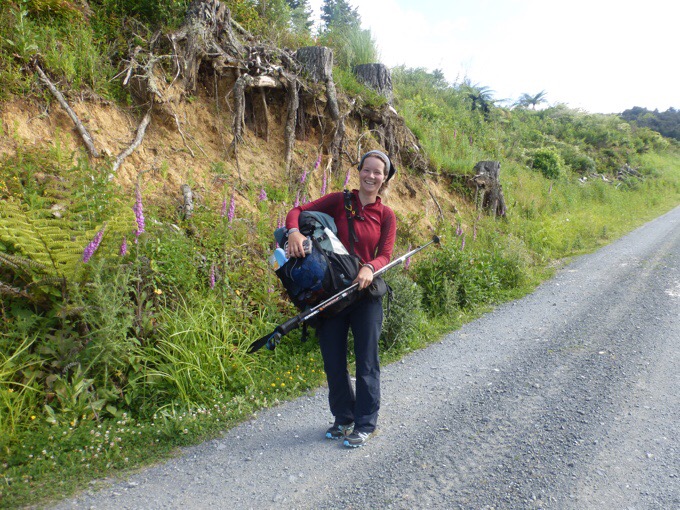 A first for Becky as she can now pull something out of the back of her pack while walking without having to set it down!

Becky has been reading and talking about this section for at least a week now. In early season, people were posting photos of knee deep mud and there was lots of talk about how slow going it was. Well, the good news is that it is dryer this time of year, but it’s still slow going and muddy. It was faster than we expected, but we were still glad we had planned a shorter day so that it wouldn’t feel stressful. It started out nice, and it wasn’t long before the muddy rooty uphill set in. 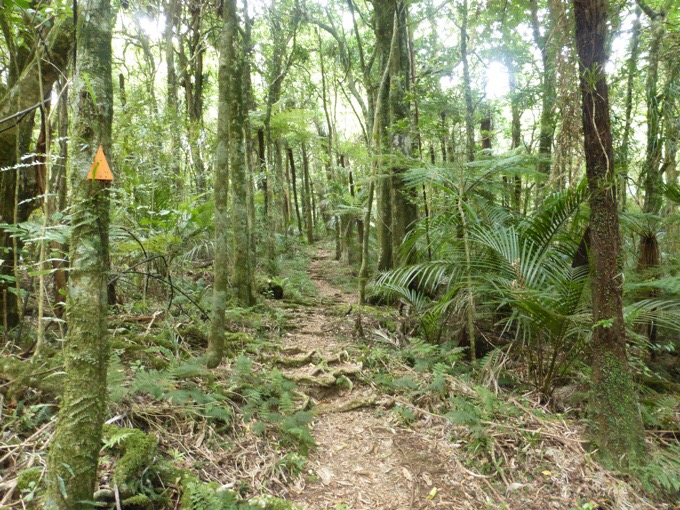 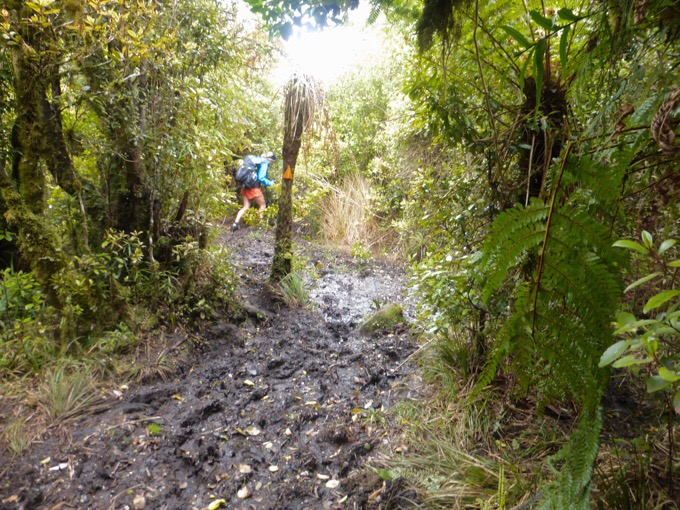 This is the first big climb Becky did with the new gear and it was a huge difference! She was so much more agile and energized going through the mud and steep ups and downs. She was right on my heels as I led the way before lunch. Then she had no problem setting a fast pace as she led after lunch. 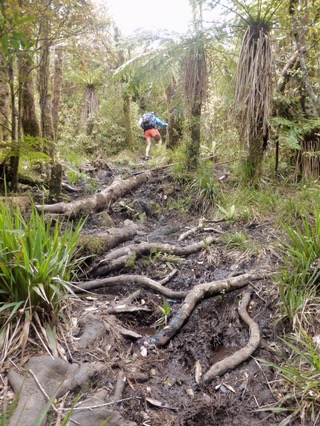 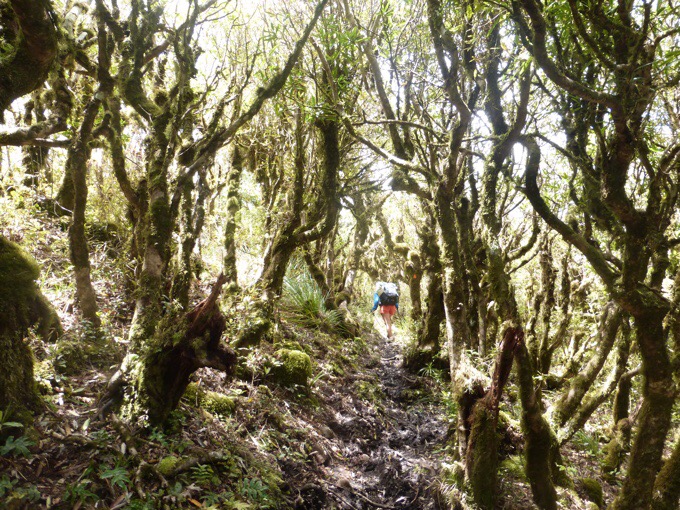 Becky said she mostly feels the difference in her knees and overall endurance. It was so fun to watch her skip around the mud and easily leap to stepping stones or roots with effortless balancing. At one point, she was on a roll leaping around some deep mud and holding onto the nearby trees as she exclaimed, “I’m a monkey in the forest!” It was so fun to watch after witnessing how draining the forest tracks had been previously. 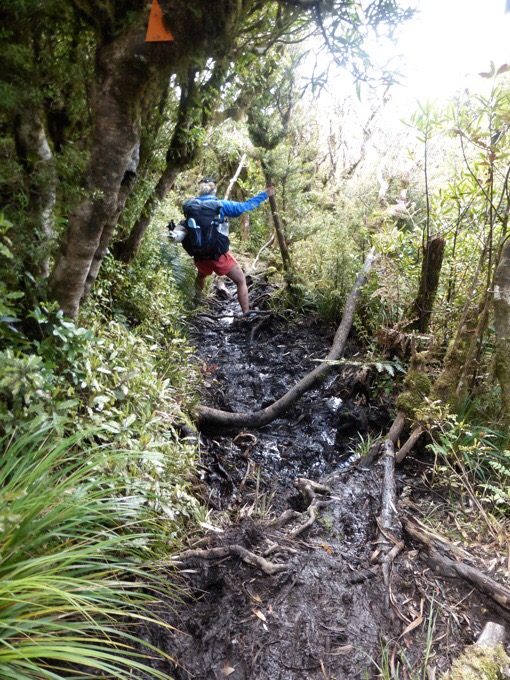 We had lunch partway up the climb and realized we were going to get to the hut sooner than we thought in the afternoon. We discussed going further than the hut, but then we read that the descent is one of the muddiest and slowest descents we will have. Becky was really excited to stay at the hut, and I had agreed to that previously, so I accepted the early stopping point rather than turning an enjoyable day into a long mud fest.

As we left lunch, we were joined by Jasmin and Jan who had camped with us last night (and started the TA the same day as me). We headed up to the summit as the last mile got much muddier and steeper. 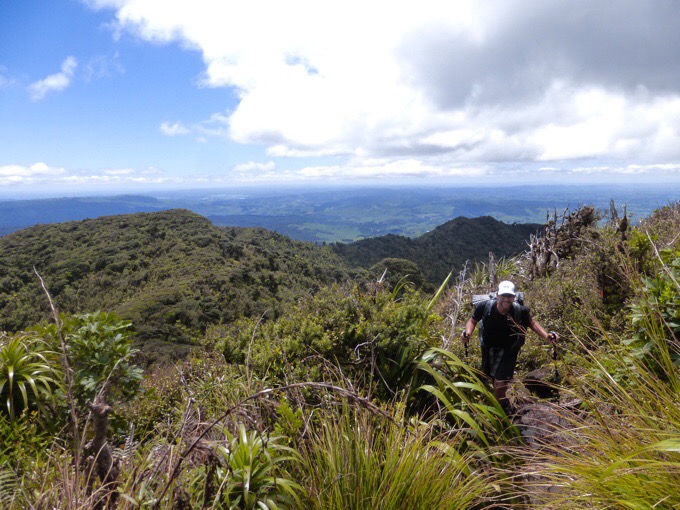 A look back on the climb with Jan.

There was a nice lookout on top and we had a great 360 degree view. It was a great day for it as this area can often get clouded in or have tough weather. With the clouds, the views didn’t extend far enough to see the mountains ahead that we are excited to be approaching. 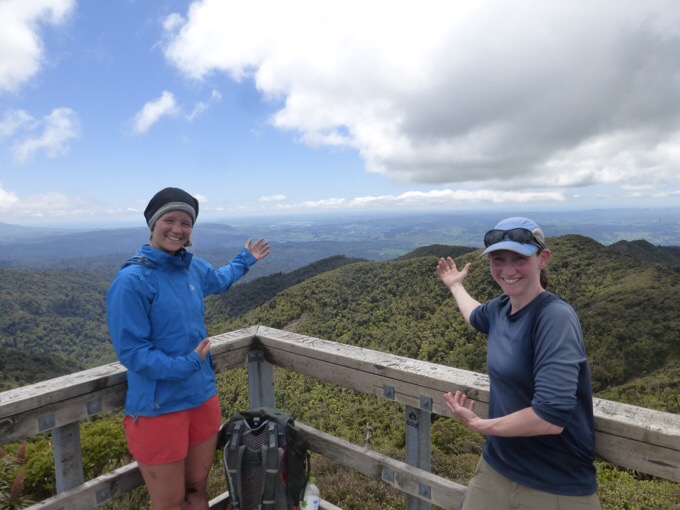 Where we came from this morning.

It was just a short hike a bit further to the Pahautea Hut and we arrived around 3:30pm. It’s a large hut that was built last year and holds 20 people in two rooms. There is a lot of inside space for eating as well. It is $5 to sleep there, but free with the $90 hut pass many thru-hikers bought. The view from the hut looks out over where we are headed and was great! Soon after we arrived everyone we camped with and more (TA hikers and overnight people) arrived. 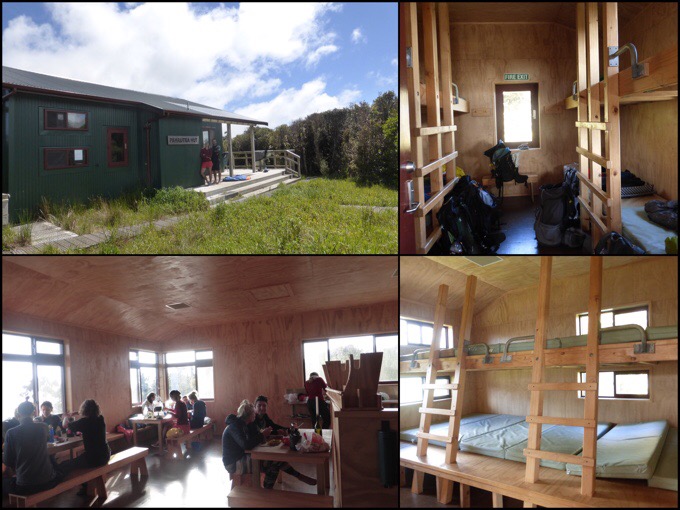 There was plenty of socializing, and I decided to pitch my tent rather than sleep in one of the bunks. One holds 8 people and another holds 12. There are nice camp spots right by the hut that were nice and secluded. I’ve been craving some solo tent time and was happy to pass on sleeping indoors. Becky sleeps easily with noise and chose to stay in the hut. It is cold up here, but should hopefully be a good night. Some clouds came through and there is the possibly of waking in a cloud, but it isn’t supposed to rain tonight. 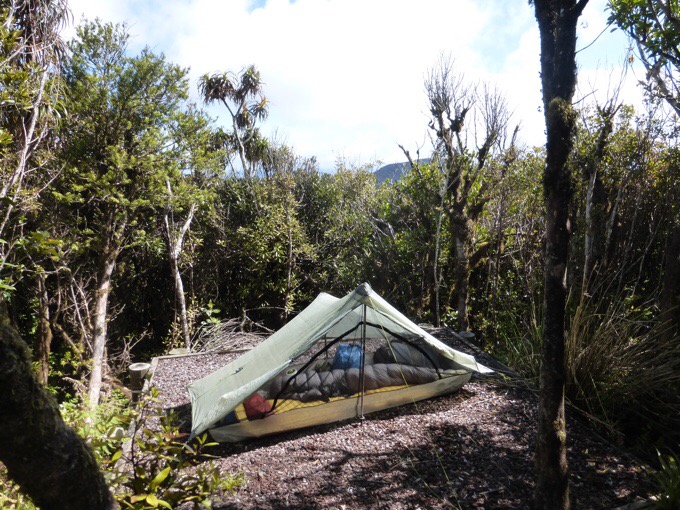 Around 5pm, Matt, Laurel, Angelynn, and Heartbreaker arrived. We thought Angelynn and Heartbreaker were ahead of us, but it turns out they did a fun side trip into town to check out a motocross event yesterday. All four of them were hesitant to stay with the crowd, but Angelynn and Heartbreaker chose to stay while Matt and Laurel hiked on a bit to find a more private spot. On a side note, Will is giving it another try and jumped back on trail! He is a couple days back, so who knows, we may cross paths again in the future.

The sunset up at the hut was pretty great, but was tough to capture on camera. It was one of those cool moments where the clouds had settled low, so we were above a layer of clouds with mountain tops sticking out. 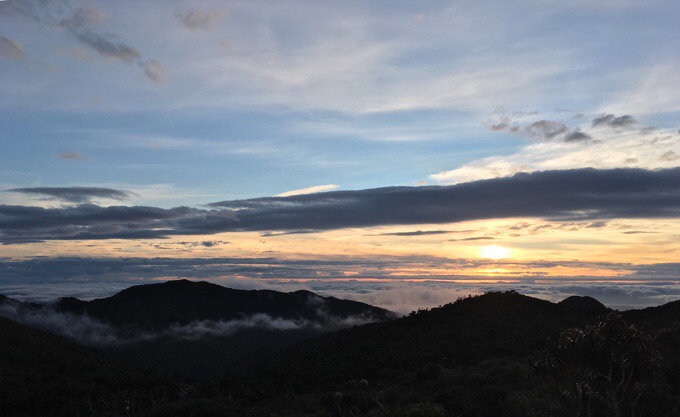 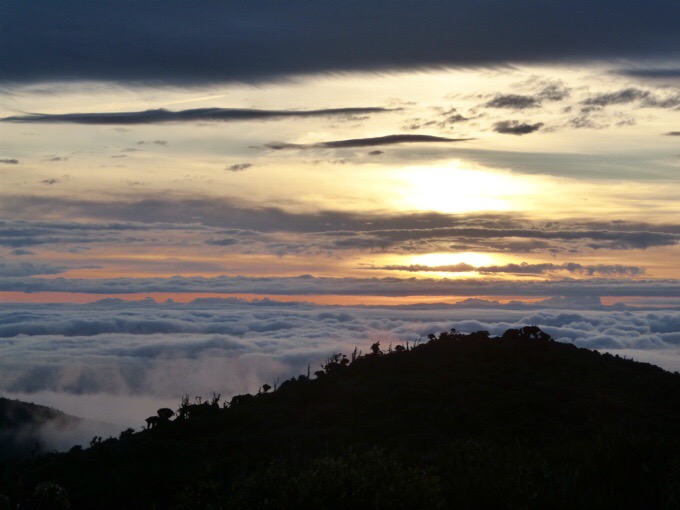 I’m happy we decided to stay and my mentality of seeing this as more of a vacation is totally helping. It was relaxing to end early and there is no rush as I’m still ahead of schedule. It definitely was a good decision that made today enjoyable rather than a slog. Becky is thankful I agreed to relax a bit these last two days to make the hut happen and is really enjoying her first hut experience. She is energized and even offered to get an earlier start tomorrow morning for a bigger day, yay! Tomorrow, the really muddy descent awaits!