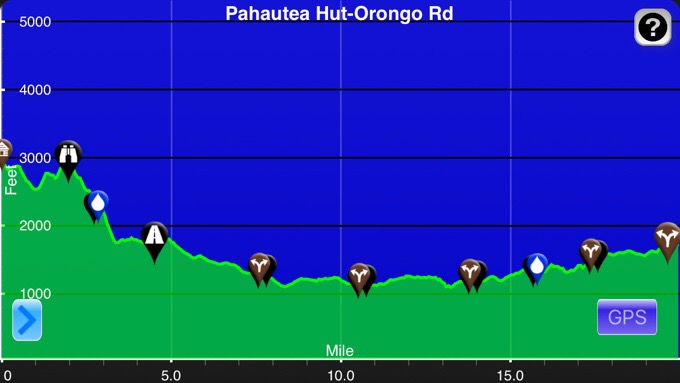 Since we stopped early yesterday, we got a bit of an earlier start today and left just after 6:30am. I seem to have lost my second major item on this trail today. A couple weeks ago, I lost my sunglasses and this morning I couldn’t find the stuff sack to my sleeping pad. Yesterday, before the crowd arrived, I had unpacked in one of the bunk rooms in the hut. Later, when I decided to set up my tent for some solitude, I must have lost the stuff sack in the transition. I looked around the hut and where I’d been, but I couldn’t find it. I was even that terrible person that went into the bunk room before anyone was awake to look before we left and couldn’t find it. So frustrating because I knew it had to be somewhere right around the hut or where I camped and it wasn’t there. It’s a mystery and maybe it will magically appear in my pack somewhere, but hasn’t so far. Ugh, it isn’t an essential piece of gear at least and is easy to live without. I just like having it for one more layer of protection from being punctured.

As for today, it was a brisk morning up high on the ridge, but thankfully not windy. We indulged in 10mins of boardwalk walking before the trail became the Hihikiwi Track, which is known to be one of the muddiest tracks of the whole trip. It was nice to get a morning view up top on the Hihikiwi Summit before we headed down. 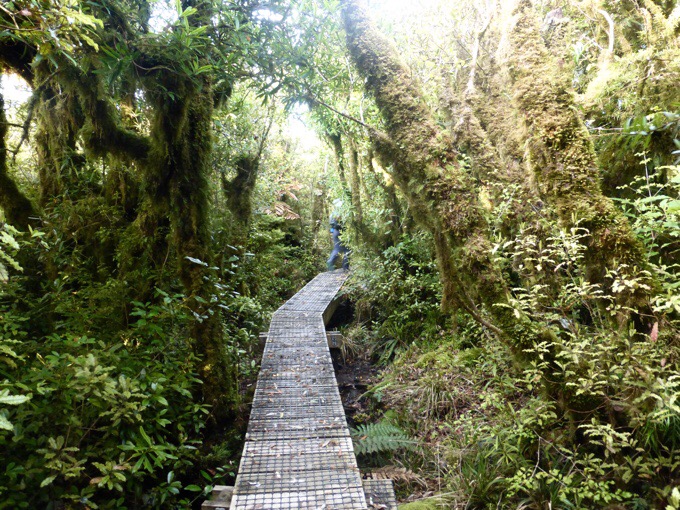 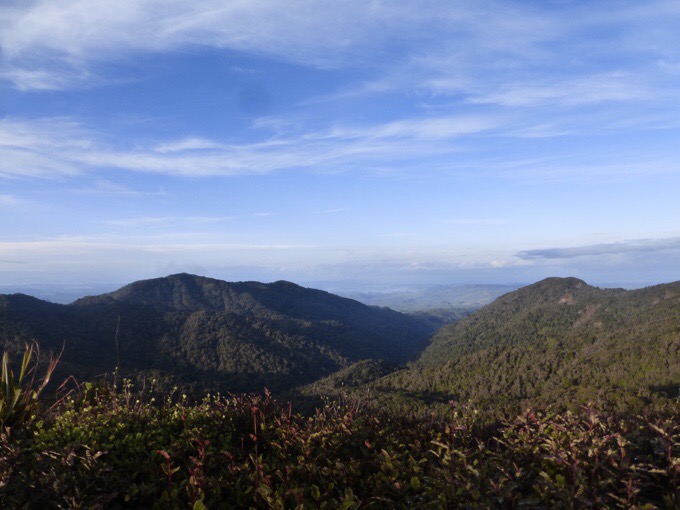 We stopped early yesterday because we knew the Hihikiwi Track would be better to do with fresh legs and minds. It took us 2.5hrs to do the 2.4mi/3.8km track. Since it hasn’t rained much lately, the first half of the track was thankfully more solidified than we expected. 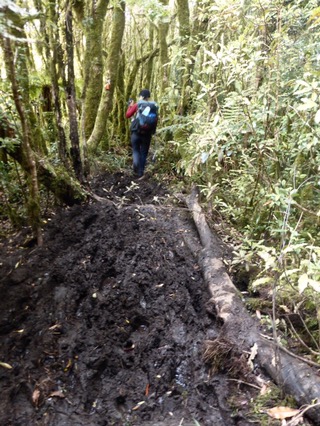 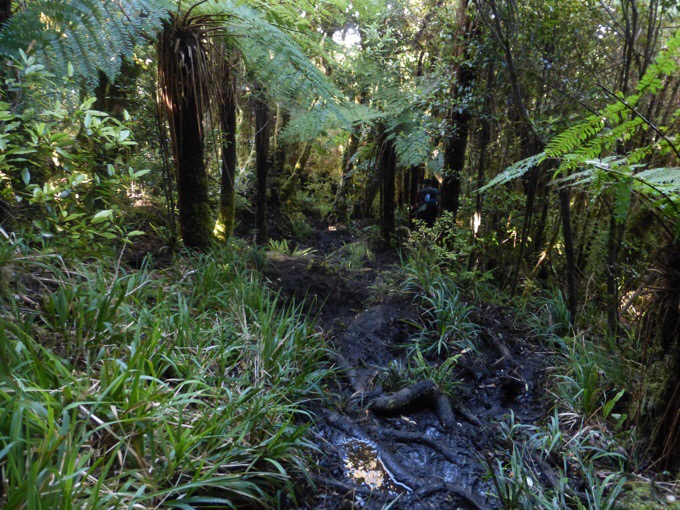 It was the second half that got slower with more mud and roots. We’d seen pictures of mud that was thigh deep, so it seems we got lucky with it only being shin deep in places. I can imagine it being quite a lot slower had it been wetter or had recent rain. We actually had fun with it. It was much more enjoyable in the morning than at the end of an already strenuous day yesterday. 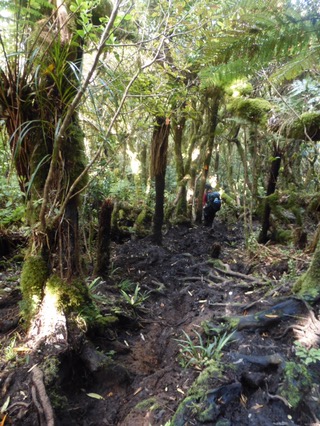 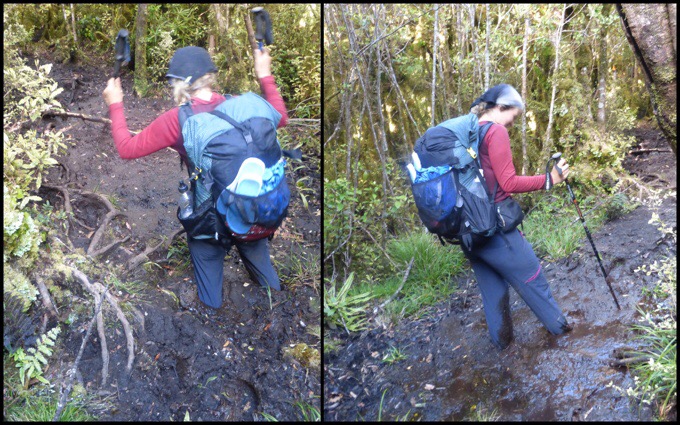 There was a great stream at the end of the track and we were able to rinse clean before our day of mostly gravel road walking. We leapfrogged and overlapped with Victoria (who we first met in the hut on day 24). She ate lunch with us and hiked a bit with us, but I forgot to get a photo. She’s great, is from Italy, and also a purist walking the roads. We tend to do longer days than she does, but she has spent less time in town, so it’s been nice to see her multiple times. The scenery today of the farmland, clouds, and rolling hills was the best yet. I couldn’t get enough photos of it! 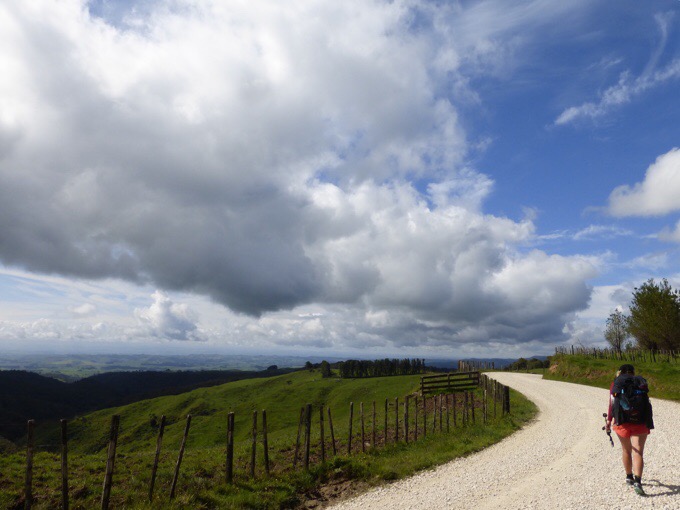 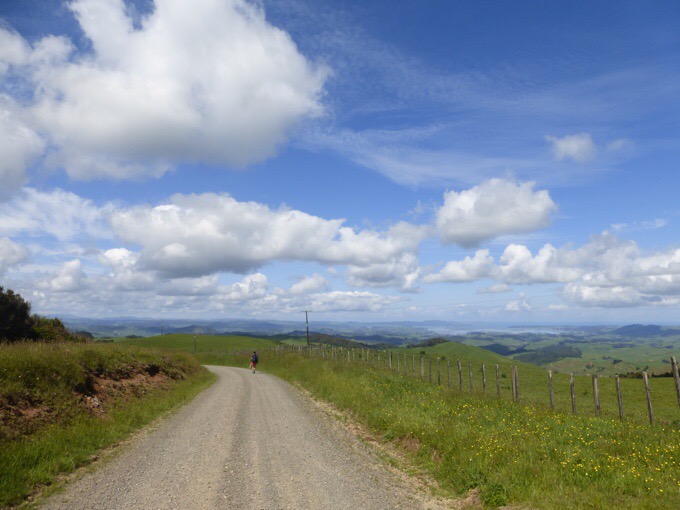 We are really close to the west coast again, and could even see a bay in the distance. 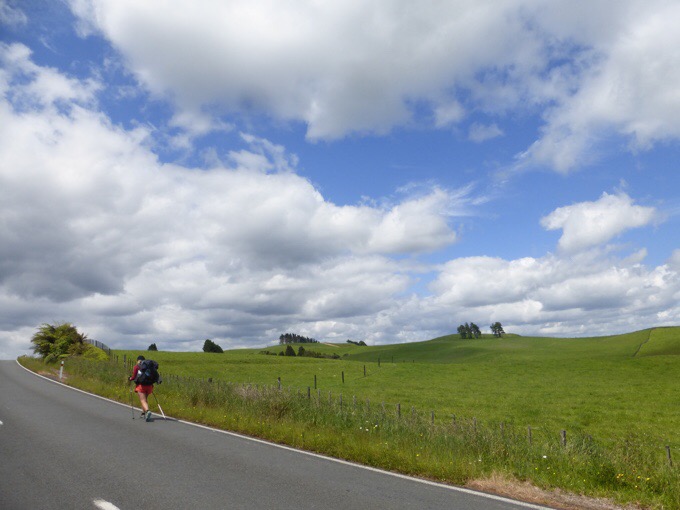 We also overlapped a bit with an American couple from Oregon that are hitching, so we may not see them again. They had done the PCT as well, so it was fun to talk trail for a bit when we did overlap. 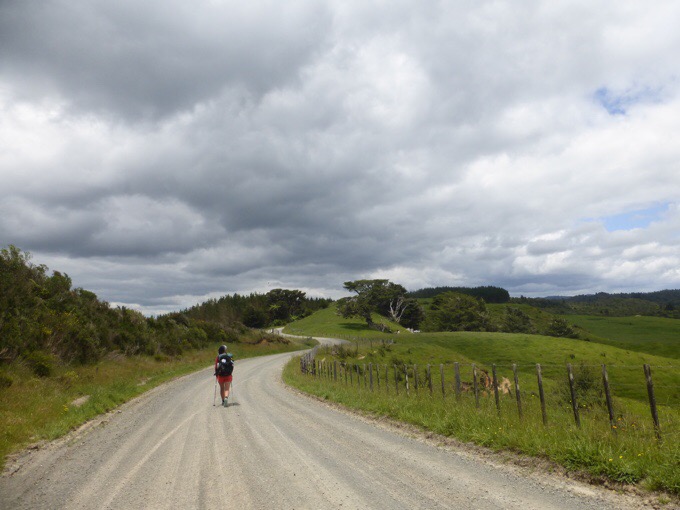 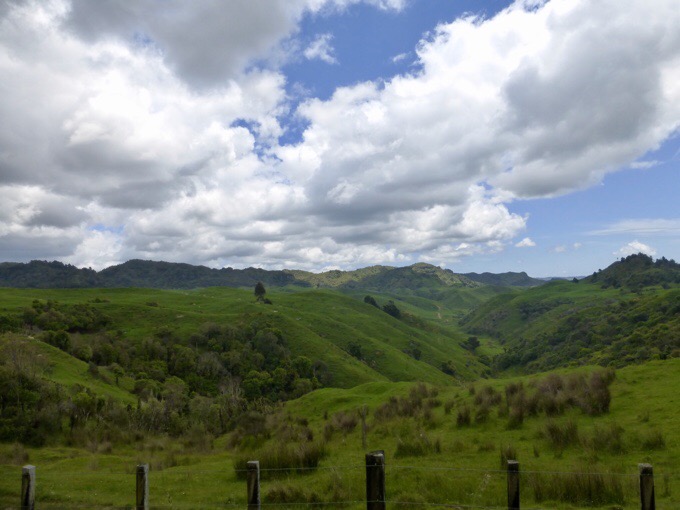 The end of the day had another forested section that was a bit muddy in spots, but nothing terrible. Our goal was to make it to a camp spot marked on the Guthook app. It’s the first year for this app on the TA, so there have been a few times that the camping info is wrong because it lists a spot that is on private land or restricted to no camping. In this case, it was the Oamaru Scenic Reserve. We usually catch these mislabeled spots ahead of time, but missed the note in the trail notes, so we didn’t find out that it’s a no camping area until we reached the trailhead. 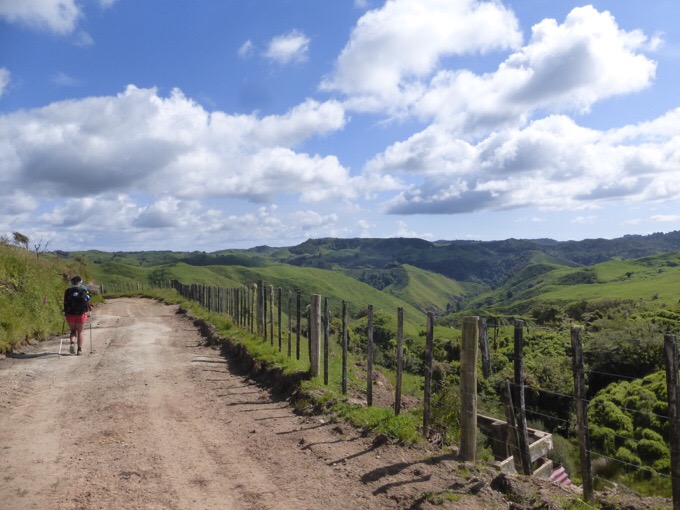 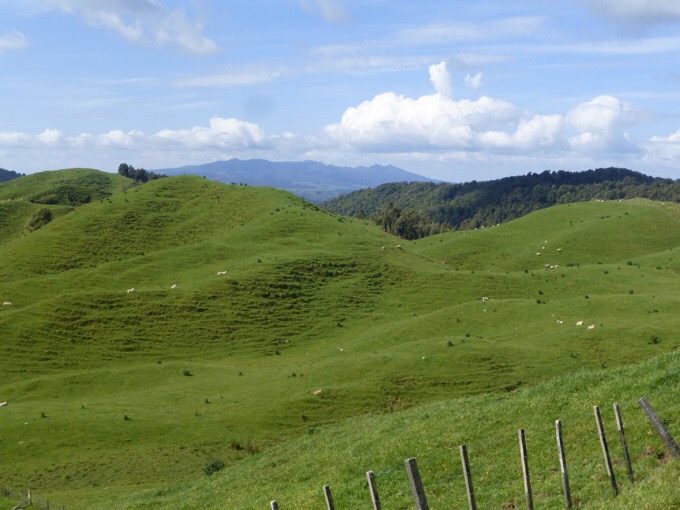 The top of that range in the distance is where we started from this morning.

We had planned to go a bit further, but since it was a no camping zone, we started looking at other nearby options. We had just passed a quarry where a man was using a large bulldozer to scoop mud or dirt or whatever into truck beds to transport up to his farm just up a hill up the road. We decided to ask him if we could tent on his property, and it turns out he’s had many TA hikers stay in his wool shed. Classic! Only on the TA would you sleep in a big wool shed where they shear sheep.

As we were asking, the German couple, Jasmin and Jan arrived (Here is their blog in German). The farmer (named Nigel) let us in the truck bed with the mud/rocks and Jan got in the tractor with his 9yr old son that was driving the tractor. Yep, a 9yr old was seriously driving a tractor. It was pretty cool to see. They drove us up the hill about half a kilometer and pointed the way to the sheep shed. It is a pretty great spot with plenty of space, running water, a sink, a toilet, cold shower, and a table and chairs. So nice of him! 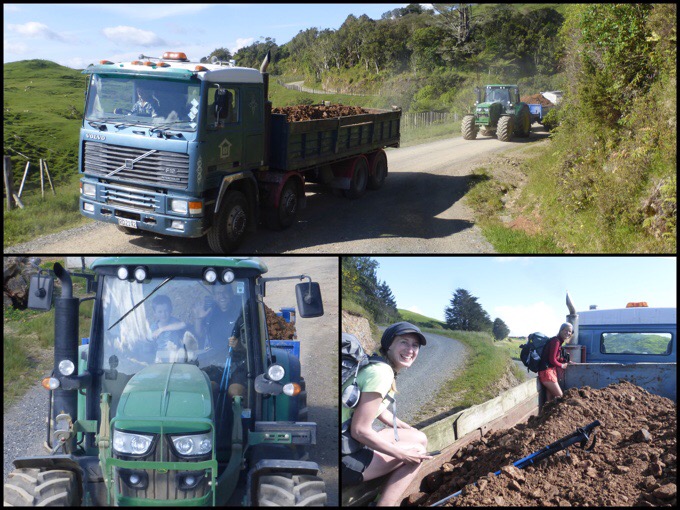 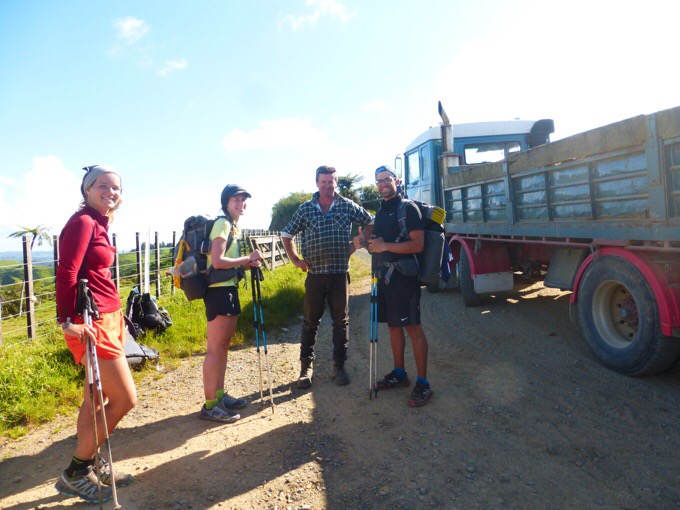 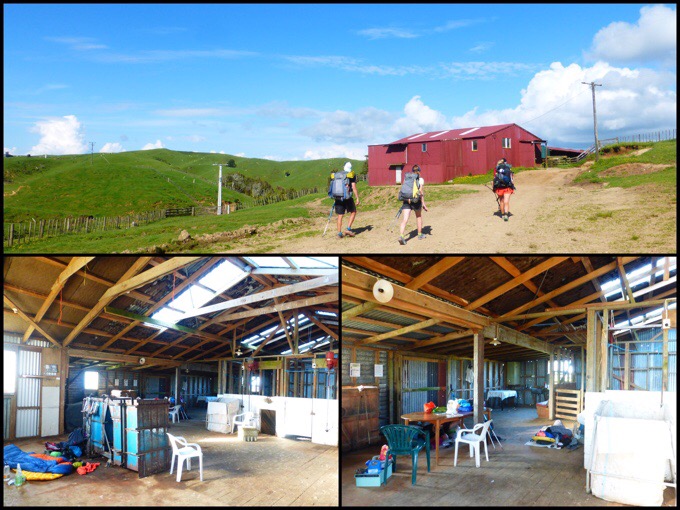 It was about 5:30pm when we arrived. It was nice to have a relaxed night with fewer people around. I’ve been getting to sleep too late the last few days, so I’m happy to have had an easy night where I didn’t need to do as much since we were inside. I might actually go to bed before 10pm! Well, it was a classic Te Araroa day. Some muddy forest walking, plenty of gravel road walking along beautiful scenery, and a camp spot on a farm in a sheep shed. Yep, definitely not your ordinary trail.