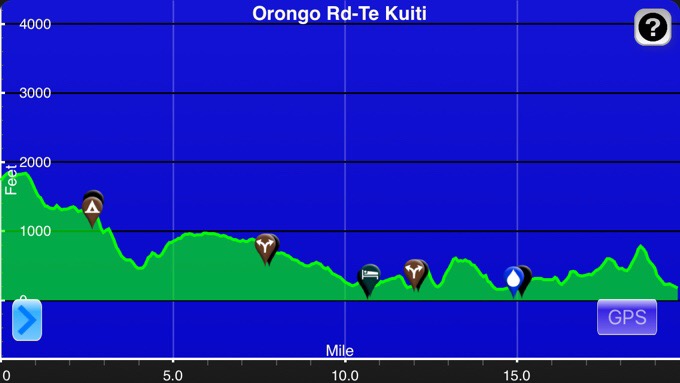 It was a great night of sleep in the wool shed. It was great to be inside because there was a ton of condensation and a low lying fog outside. We left, with Jan and Jasmin just behind, just before 7am. We overlapped on and off for the morning. Our shoes were immediately soaked in the wet grass as we hiked into the morning fog. 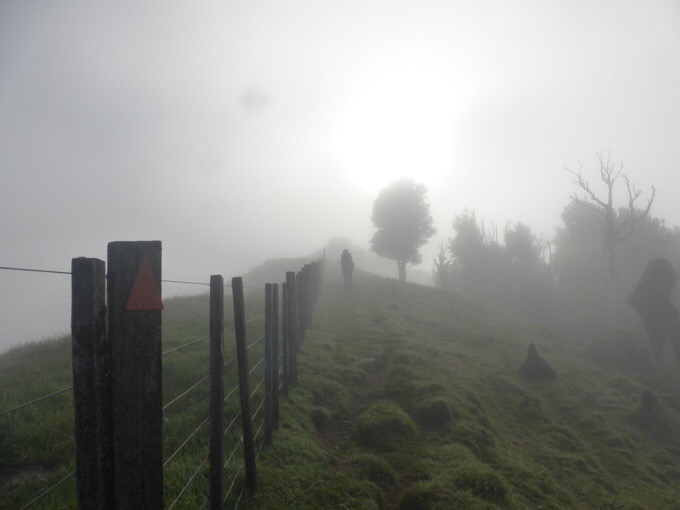 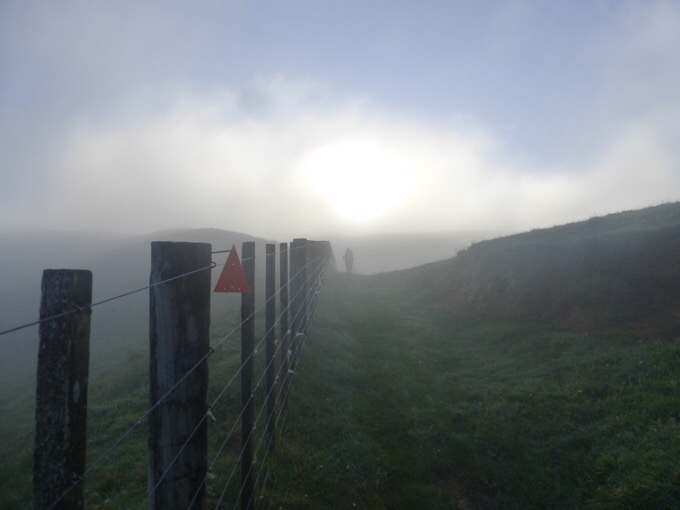 Today was full of ups and downs through farmland with what seems like the least amount of road walking we’ve done in weeks. It finally feels like we’ve settled into a groove and it feels more like thru-hiking! From following Why Not’s TA journal from last year, we had a heads up on a section that was quite brushy and had a lot of small elevation changes that she mentioned annoyingly paralleling a road. On the Guthook app, there is a way to load the aerial version of the maps and it’s come in very handy out here at times. We could see the dirt road clearly paralleled the path along the fence line, so we all took that and were so glad to have a moment to take in the scenery. We could still look out and see the Pirongia Range that we were on top of two days ago and that’s pretty cool. 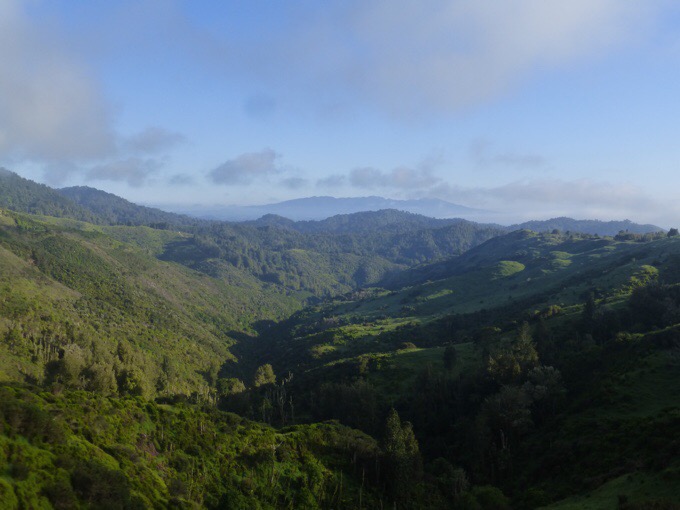 The Pirongia Range in the distance. 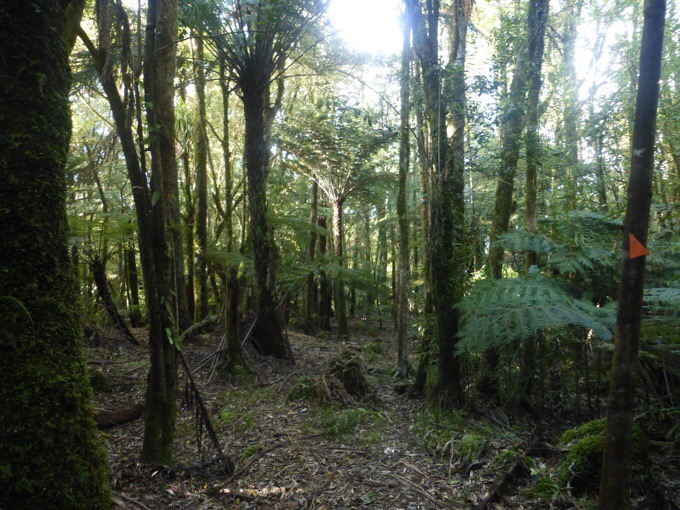 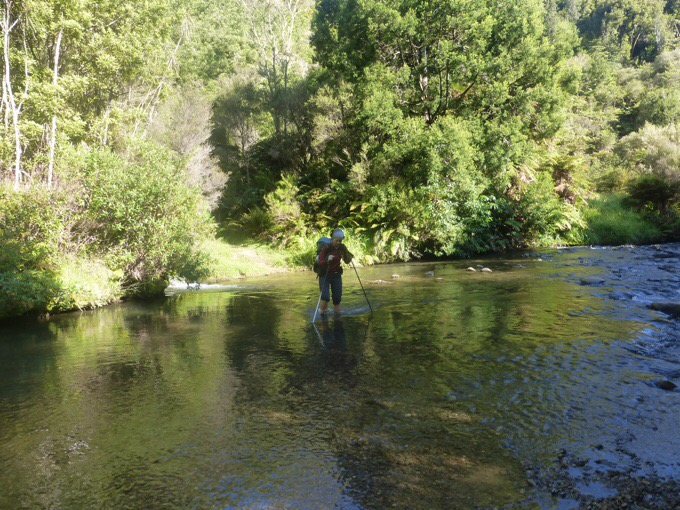 Later in the morning, we hit a tunnel of gorse for awhile that was somewhat cut back, but still unavoidable to touch at times. Good thing Becky had long sleeves and pants on! She still had a slight reaction and rash as it easily pokes into clothing, but thankfully nothing major. They really need to cut back these areas for people who are allergic because the reactions are pretty bad. 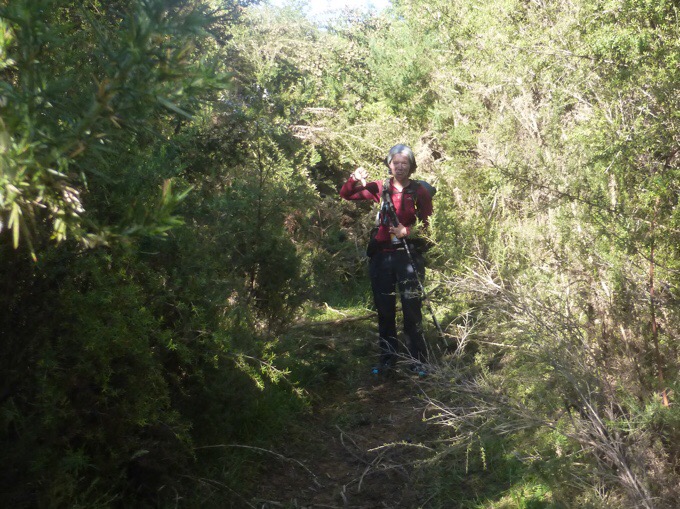 The final 5km into Waitomo was road walking and I got to talk to Jan and Jasmin more as we headed in. The Waitomo Glowworm Caves are a major tourist destination and many hikers stop off to do the pricey tour. There are various levels that include taking a boat in or even rappelling down waterfalls. My sister came here on her honeymoon and I thought about doing a tour, but since we saw glowworm caves in Waipu already (and it was a huge tourist trap in Waitomo) it wasn’t as appealing. Waitomo was about two blocks long in the heart of it and it was all about the caves with tons of buses and tourists. 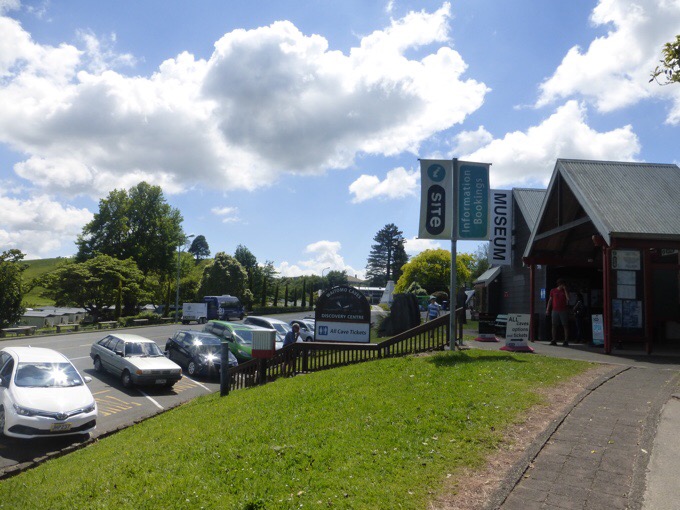 It’s been fun to see Becky evolve into thru-hiking and find her own way of doing it. She has expressed a desire to spend less time in towns and I’m all on board with that! We decided to walk through Waitomo without buying anything so we could eat lunch on our own on trail. It was relaxing and peaceful. We’ve been in a bit of a herd, and it was nice to spread out from that. The town pull can be tough to resist and I was proud of Becky as it’s been many days since she’s been able to feed the soda addiction. We knew we’d hit town in the evening and have plenty of opportunity to buy things. 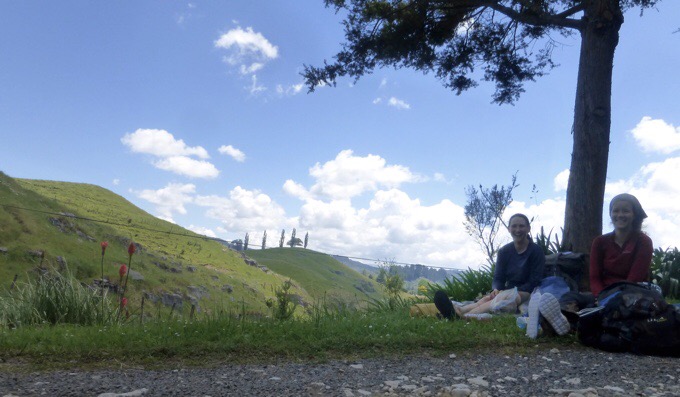 After lunch, it was something like 8mi/13km to the town of Te Kuiti. We knew challenging and slow going farmland laid ahead and it was the hottest out it’s been yet. The NZ sun can be quite hot at full force and it was really humid as well. The thermometer was reading 87F/30C in the sun and it sure felt like it. We were dripping sweat going through tall grass and brush. There was an hour or so that was so hot and brushy that it was my worst section so far. Becky commented that it was worse to her than any of the slow muddy forest tracks. I’m sure this would have been different if we weren’t in such strong heat and humidity. 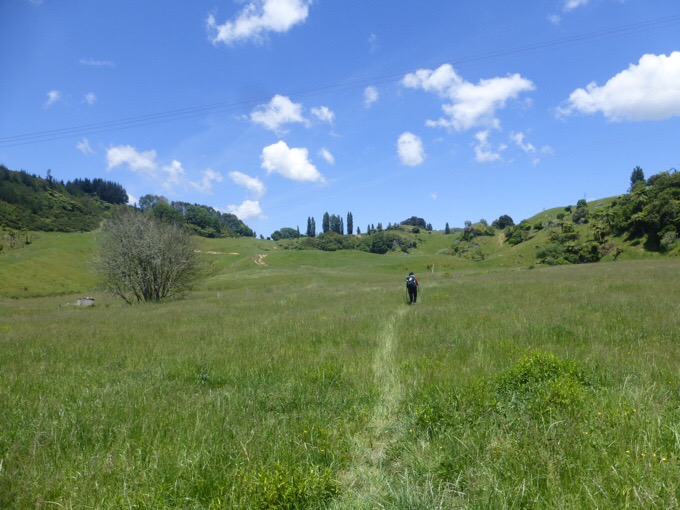 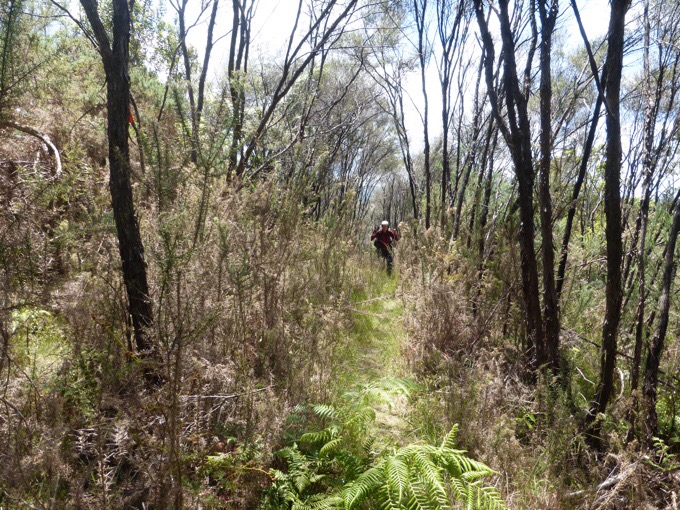 I had shorts and short sleeves on, but poor Becky had to wear pants and long sleeves because there was more gorse. We were totally dripping sweat and quite worn out. Terrible timing for this section for sure. There was a fairly new wooded stretch that was basically hacked into a hillside on clay-like mud. That will be interesting after a couple years of erosion and trampers. We did hit the 900km/560mi marker and that was cool. 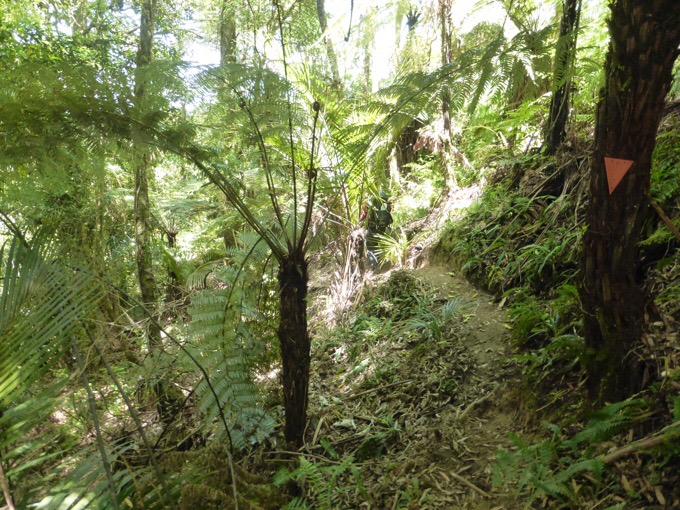 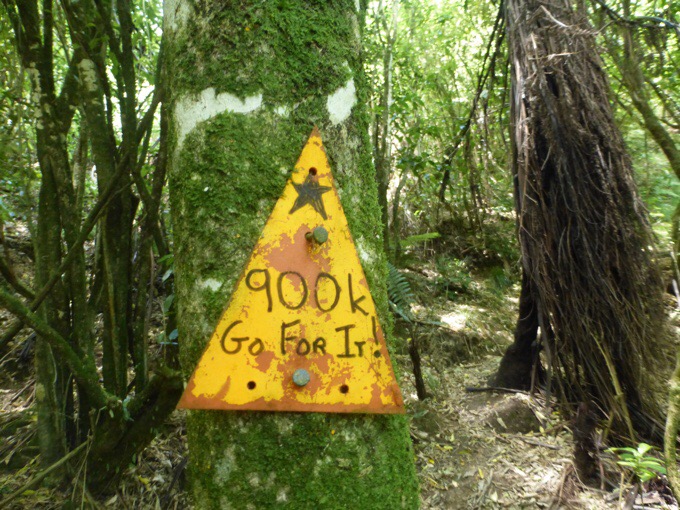 The brush cleared a bit, but we still had hours of tall grass cross country to do for the day. The ground was very uneven with many divots from when cattle had walked through it in mud. Not great for both of us who have weak ankles. It was taxing and super slow going. Even the cattle were huddled in shaded spots. 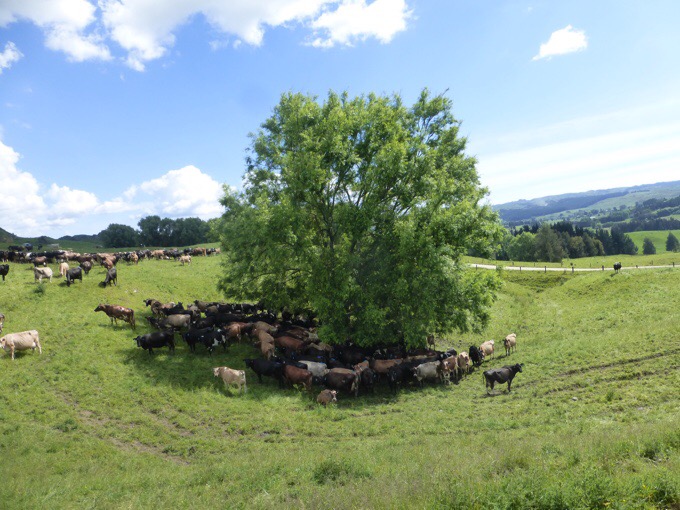 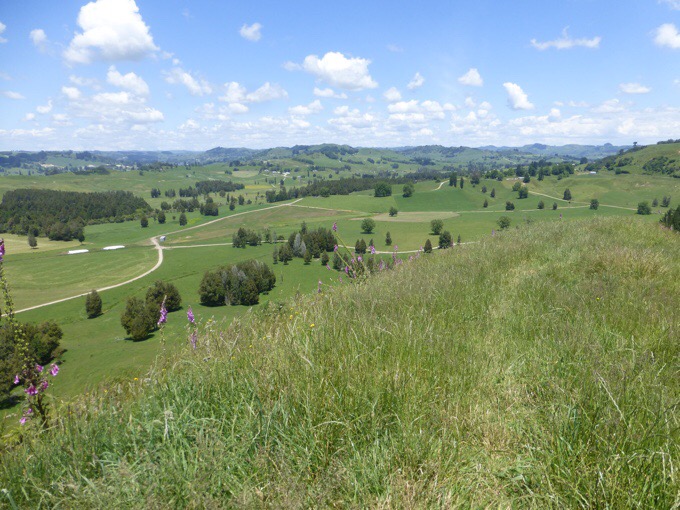 We read in the trail notes that during sheep shearing season, there is a road detour around this section that easily led to town. It was really tough mentally to be so close to town and have the road within sight and not walk that instead. In a moment of weakness, we headed in the direction of the road, and ran into some locals that convinced us to stick it out after saying that they see many hikers doing it each day. We had felt like we were the only ones stupid enough to do it because there was absolutely no evidence of others or a path in the grass. We continued on and just accepted defeat at that point. 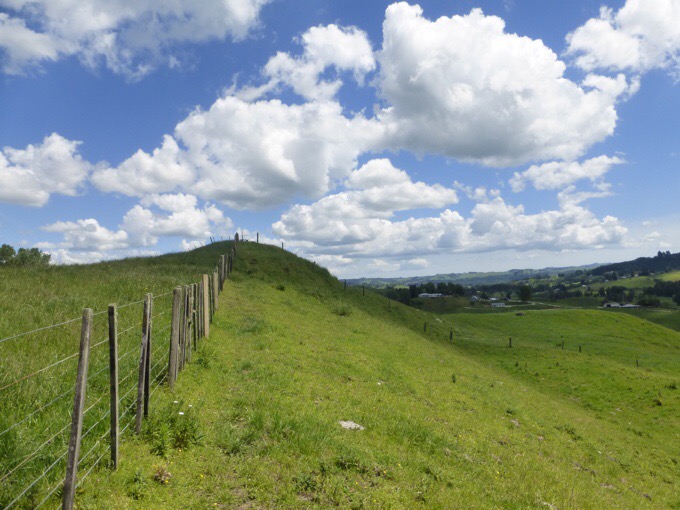 It just wasn’t our day, as just before the last two big steep ups, we must have missed a marker. We were on track, but it was off just enough to have us exploring the wrong side of a large steep hill and getting closed off by electric fences. We just wanted to be done and were so close. We could see town, and it was really defeating to have this happen so close to it. You can see all the ups and downs on the elevation chart. 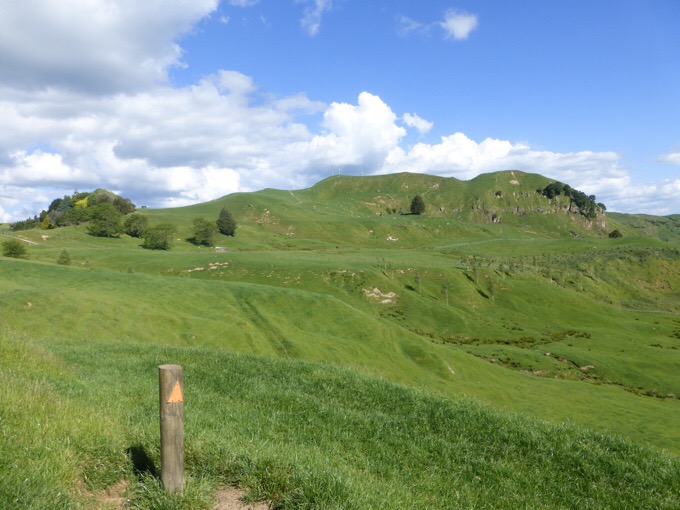 Just as we were about to give up and take a road, someone drove by and pointed to where the trail was…off the track and on the other side of the hill just down the road, argh! We stuck it out and made it to the top of the final climb quite worn out and a good 1.5hrs later than anticipated. This photo doesn’t make what we did look all that difficult, but it’s here for us as it was the end of a very rough afternoon. 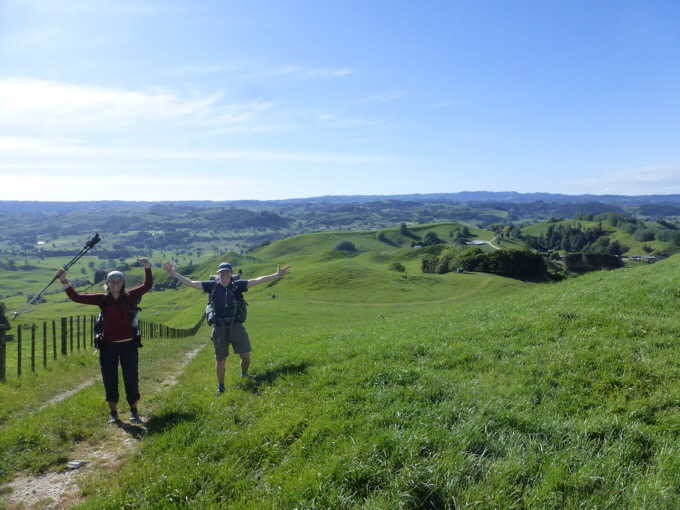 Finally done with the last climb! 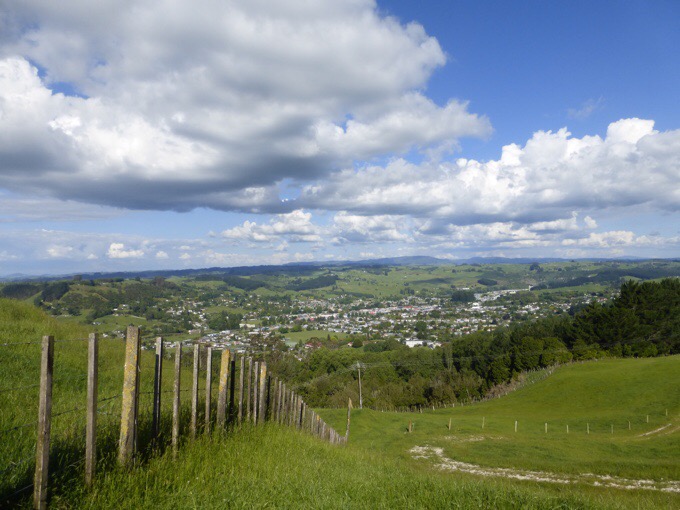 We made it down to Te Kuiti around 6:15pm. On the way down, I stopped to use the bathroom and came down trail after to find Becky lying exhausted in the middle of the trail laying back on her pack. We were laughing at how ridiculous this day had been when it really didn’t need to be so taxing. She was lying there because she got a notification from the step counter app on her phone that read, “You have more steps than usual, you don’t need to go out all day. Save some energy for tomorrow.” She said she was just doing what the app instructed, ha! Not only is the gorse an issue, but there is notoriously an insane amount of pollen in the air and Becky seems to also be hit by that. She’s really sticking it out and pushing through it.


When we got to town the owner of the local hostel (Casara Mesa Backpackers) picked us up. Don picks up hikers because he is a long 3km out of town. He was kind enough to drop by the grocery store and we got what we needed for dinner and breakfast to eat in. We’re getting the hang of this eating in thing at the hostels. It was awesome at the hostel. Just one other hiker was there (Pete who I haven’t seen since my third day). He has an ankle injury and has been waiting for it to heal here. Only two others are here and it’s so nice and peaceful. We have been around way too many people and this was just what we needed. It was just $15NZ/$11US to camp on the lawn and have full use of the facilities including shower, laundry, and unlimited awesome wifi. 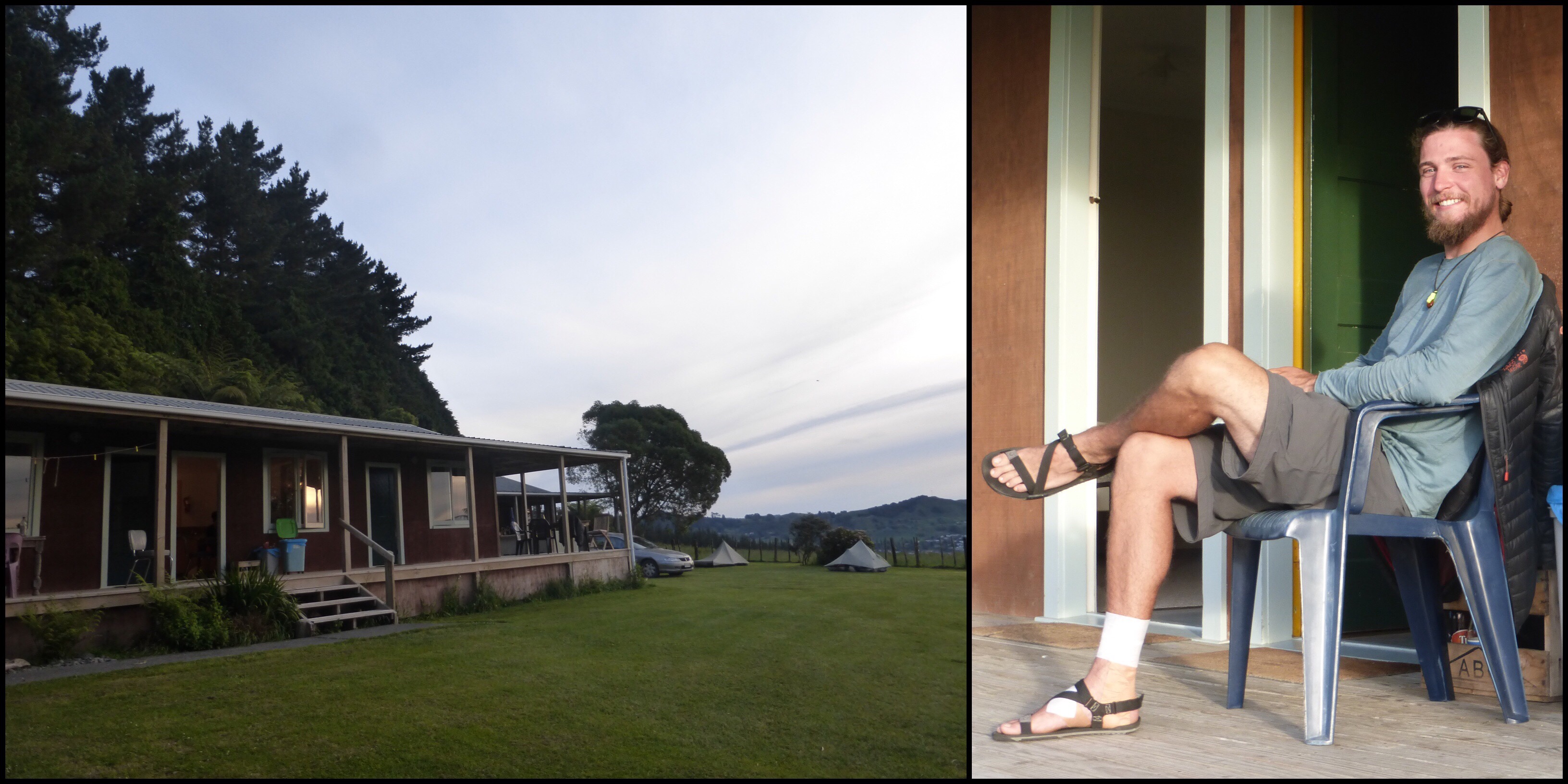 Although it had been a long day, we were in the mood to watch something to wind down after a very satisfying dinner of frozen pizzas and ice cream. Of course, I wanted to catch up on Survivor, but it was Becky’s turn to pick and we wanted to watch something together. She is an Outlander fan. I’ve tried to get into the first audiobook a couple times and couldn’t. She has been wanting me to see the first episode of the series for awhile, so we watched that. I know this series has a huge following, but I just can’t get into it. I stayed up late catching up on emails and it was after 12:30am. I gave myself a pass and wrote the blog entry in the morning. Whew! 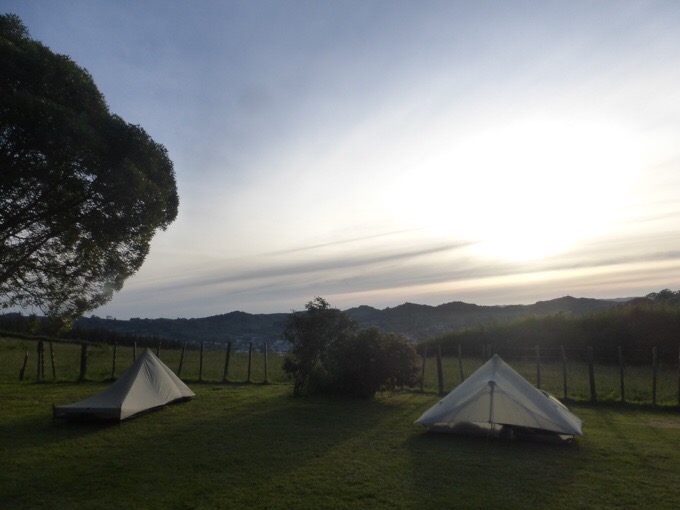