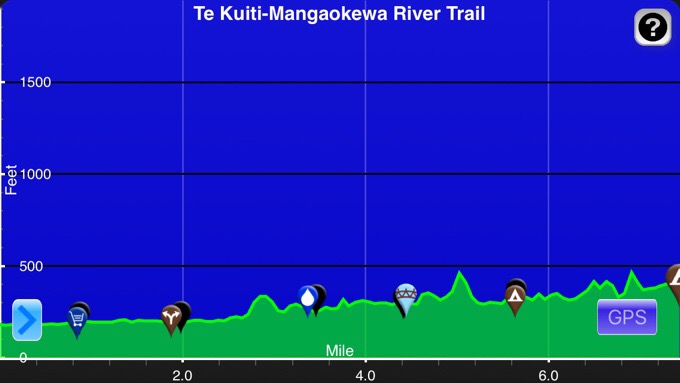 We wanted to sleep in this morning and decided to have a relaxed leave time from the hostel. Again, it’s just crazy how fast town time flies. I was up at 6am with all the bird calls and did the blog post I let slide last night. It took me awhile to get the post up and also catch up on some emails. We made an egg scramble, which is becoming a town favorite thing to do for breakfast, and also ate more of the ice cream we got last night. We’ve been devouring ice cream and milkshakes on this hike. We topped it off with some croissants and then some Tim Tams that Pete had. Yep, the glory of hiker hunger!

After we finished laundry and packed up, we were dropped off back where we had been picked up at the outskirts of Te Kuiti. We hiked the TA the 2km/1mi to the main part of town where we could do our resupply. 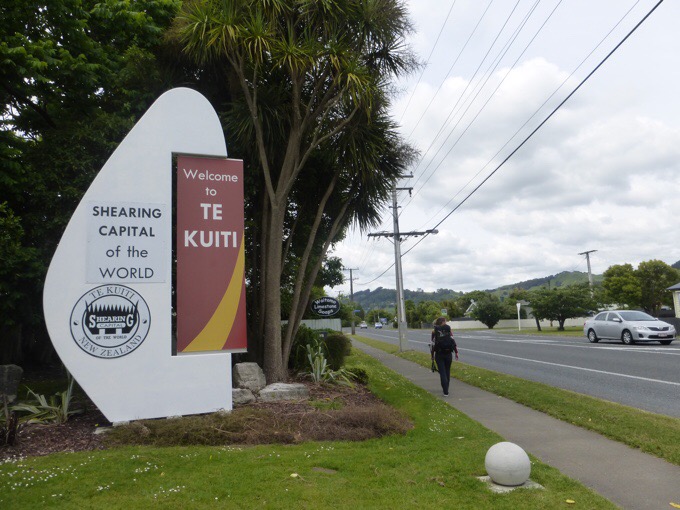 Shearing capital of the world.

While we were there, we ran into Angelynn. She had the stuff sack to my sleeping pad! Apparently, another hiker did find it at the hut from the other night, and it got passed on to Angelynn. This makes two items Angelynn has hiked back to me (my phone cord and plug previously). Man, she better not hike ahead of me, ha! She and Heartbreaker had camped on trail last night and were doing an in and out of town heading out about the same time as us. I was finally able to do resupply photos of the food we carry out. This is what we each bought for a 5-6 day leg. 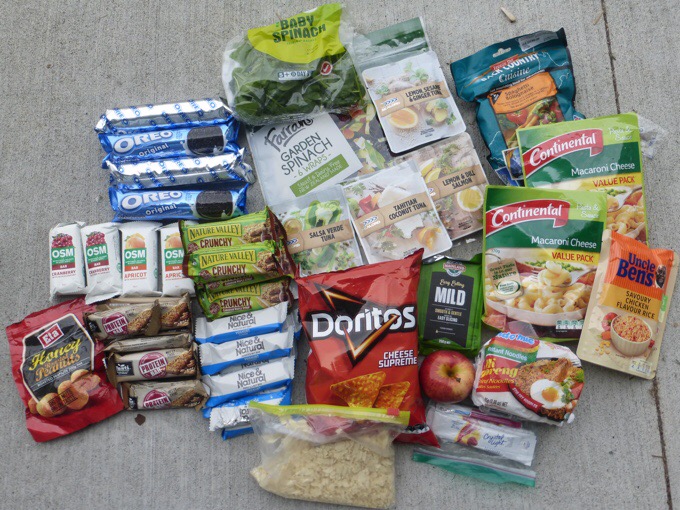 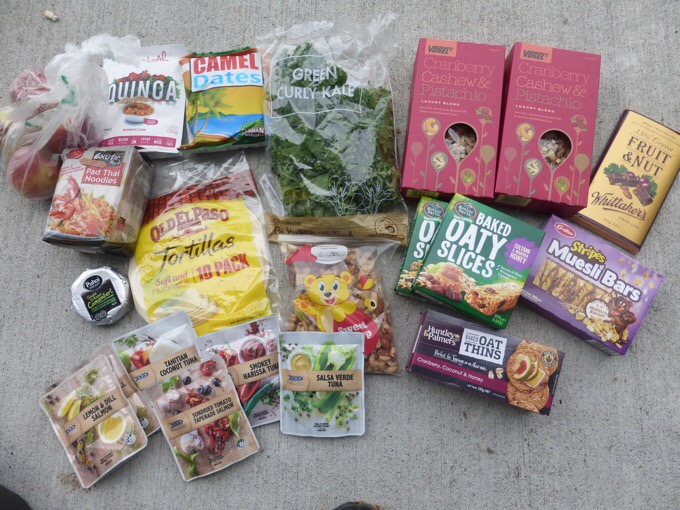 Angelynn, but missing three dinners that are in her pack. 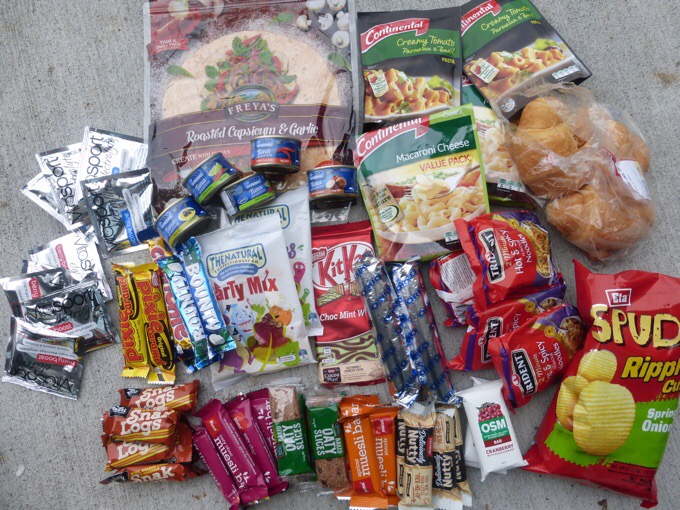 After the resupply, we stopped at a takeaway (individually owned small kinda fast food) and had too much Chinese food for lunch followed by a huge shake. Our stomachs seem to be bottomless pits now! We saw many hikers in town as we were doing our chores and hiking out. Our final stop on the way out was to the Dept of Conservation (DOC) office to look into our options of a possible side trip of a Great Walk next week at the Tongariro Crossing. It looks like we may be able to add on the full Tongariro Northern Circuit track if weather is clear when we go through there in just over a week. I’ll talk more about it closer to the date, but the TA overlaps part of the Northern Circuit and it looks like we could possibly do the whole track around the mountain and do the side trip up Mt Ngauruhoe (Mt Doom from LOTR). While we were there, we ran into the CEO of the Te Araroa, Rob Wakelin who happened to be there for a meeting. He walked right up and introduced himself and was very nice to us. While waiting for his meeting, he answered our questions about the side trip we were trying to figure out. We were able to get a photo together as well. What a random crossing! 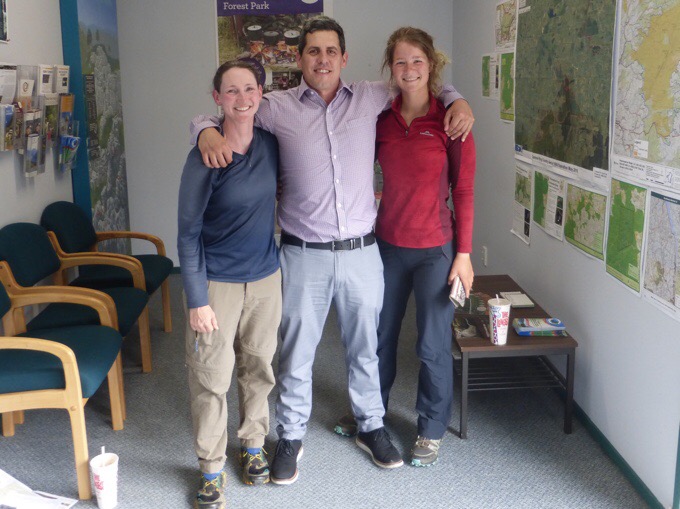 Finally, at 2:15pm, we headed out of town. On the way out, we passed the massive statue of A famous sheep shearer. I find it funny that he is wearing an All Blacks tank top. 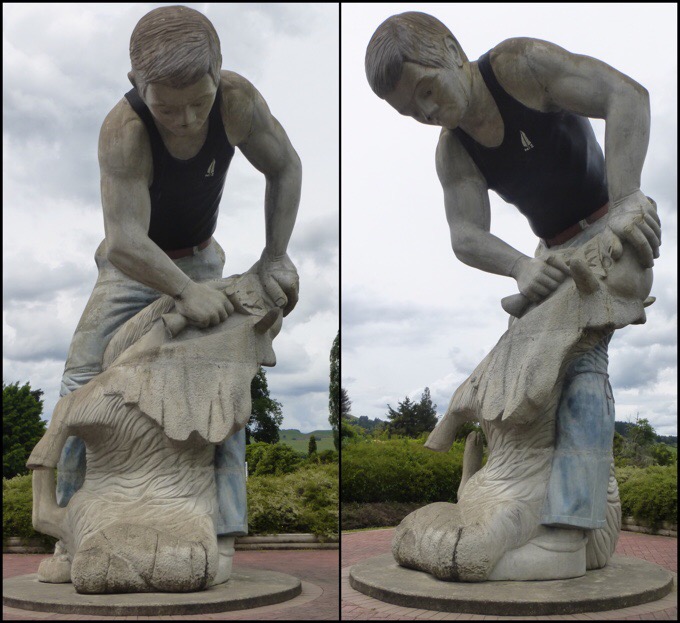 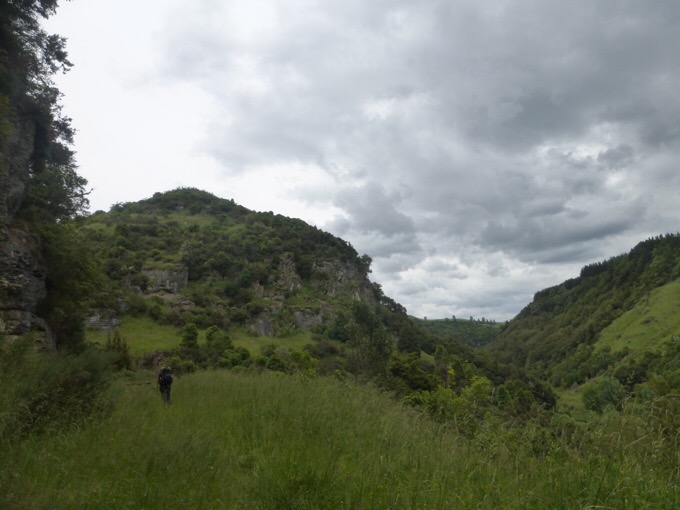 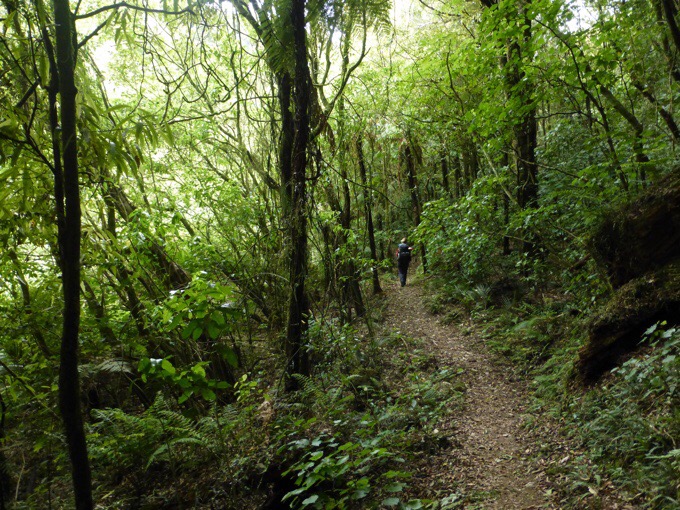 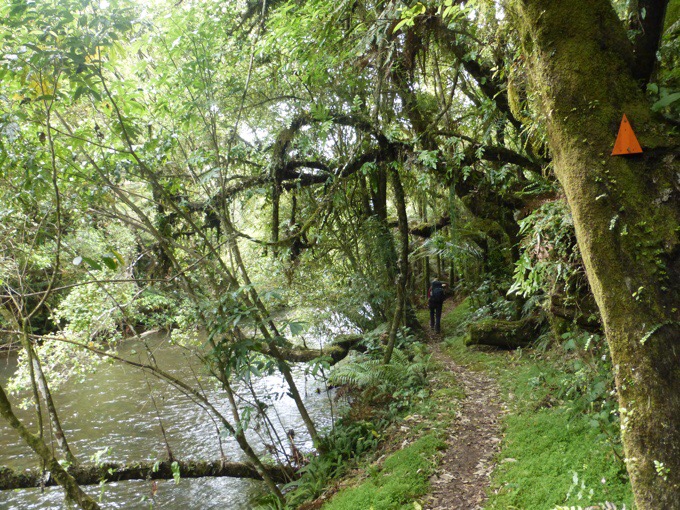 After an hour or so, we came to where the trail sort of ends and the TA continues. That happens a lot on the TA. A great trail for a bit, but the further it gets from a trailhead, the less maintained it gets. At this intersection, a kiwi TA hiker named Tom was there. I noticed he also had La Sportiva shoes and we both had to show off our holes in our shoes. Many replaced theirs over 150km/190mi ago and we are both stretching it to the next town in about 5 more days. 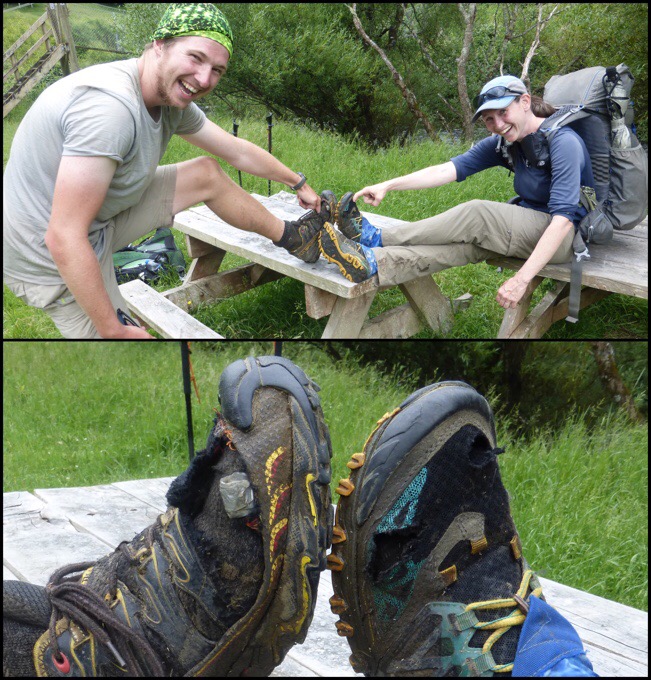 It wasn’t long before our beautiful trail became tall marshy grass and slippery side hill hiking. There were many short steep ups and down along side hills and the pace was slower. Also, some rain was coming and going. It was quite humid, so the air was thick and everything was sticky. 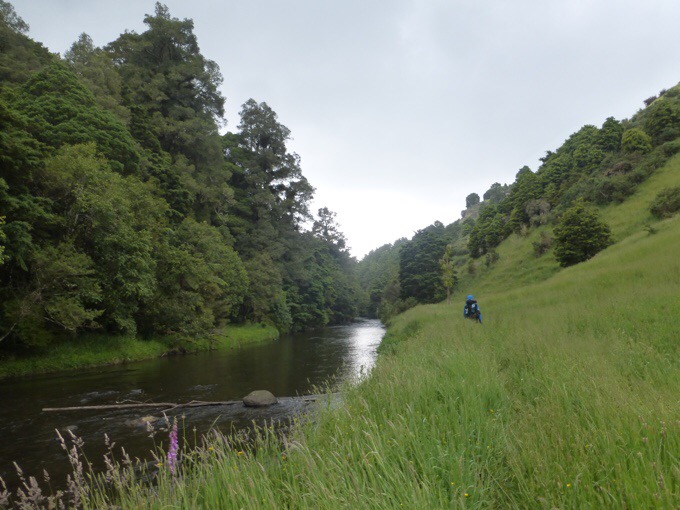 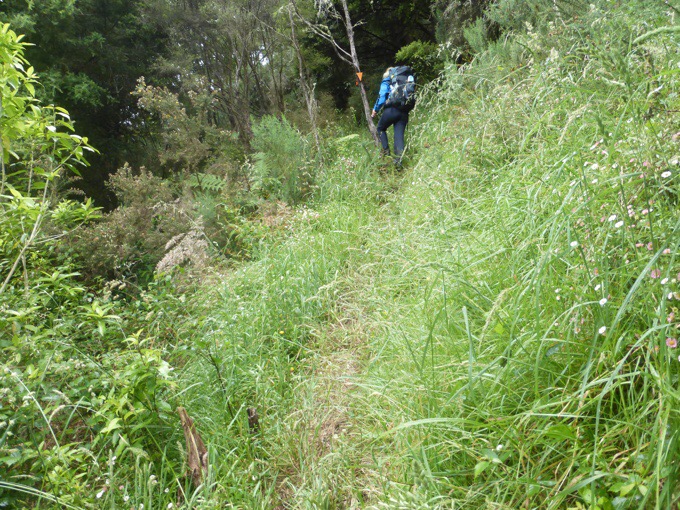 We came upon a hedgehog in the trail that wouldn’t move. I’ve never seen one before, so that was cool. Becky wanted to move it so it wouldn’t get stepped on (we knew others weren’t far behind us). She used my jacket to protect her hands and picked it up while it seemed to be sleeping (or hiding). it was pretty cute and Becky was happy to have moved it to a safe spot. 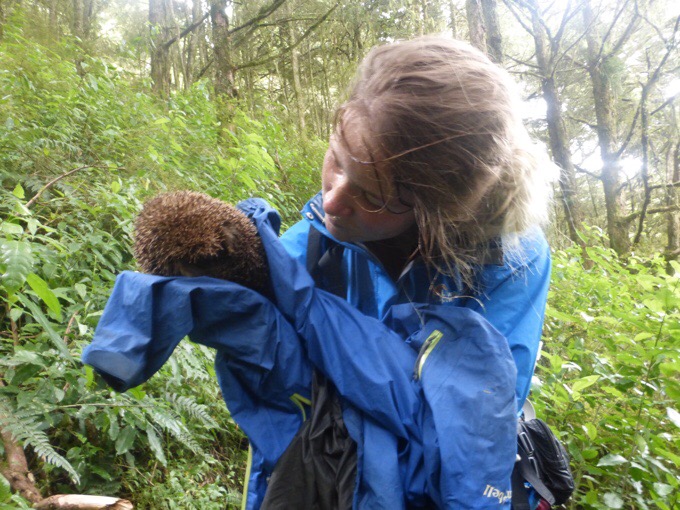 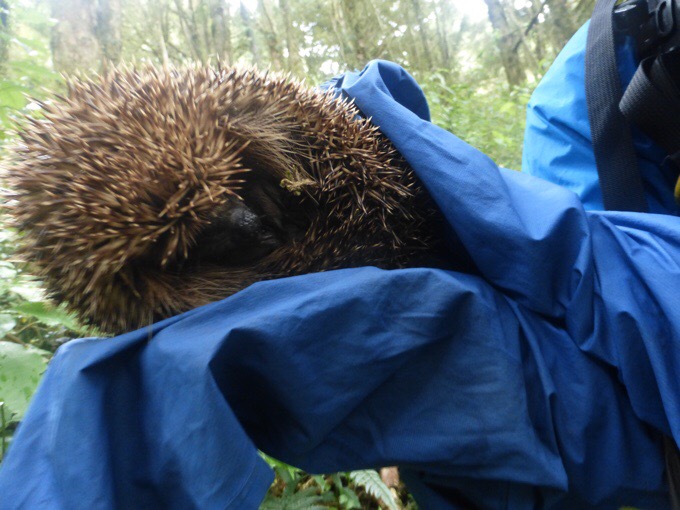 We got a later start than we had hoped today, but got lots done this morning, so it was productive. We still had time to make our goal camp spot today, but then at 5:20pm, 3mi/5km from our goal, we came upon an awesome campsite that we just couldn’t pass up! It was near a backroad, so it seems the regulars have made a fire pit, benches, left a nice table and chairs, and floatation rings to swim in the swimming hole. It was totally worth stopping and having a relaxed night. I am feeling a lot less urgency to push miles on this trail. I’m still on the schedule I had guesstimated overall, so that’s great. There isn’t a deadline need to meet or impending weather changes to beat down south. We have plenty of time, and stopping at an awesome campsite by a river is just what it’s all about. We happily stopped and got our tents up just in case the rain started.

As we were making dinner, Angelynn and Heartbreaker arrived and joined us. The four of us enjoy one another’s company and had fun having a relaxed dinner at an actual table along the river. While we were there, three more hikers from the dozen or so that we’ve been around this week arrived and they too chose to stay. The site was big enough that they did their own thing in another space. Man, it’s crowded out here! 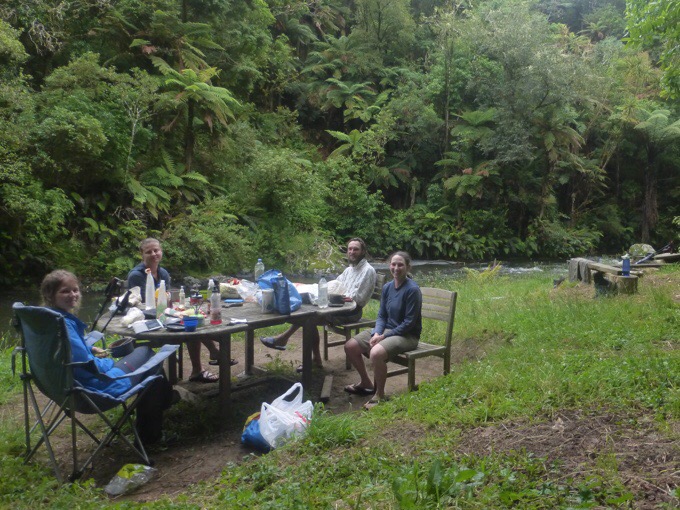 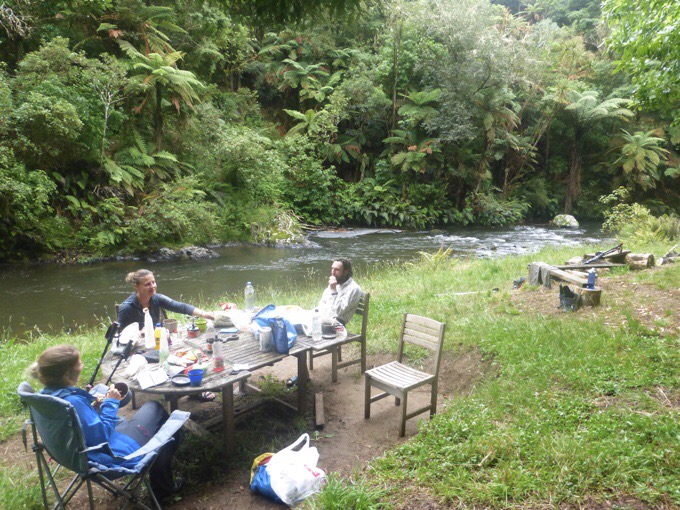 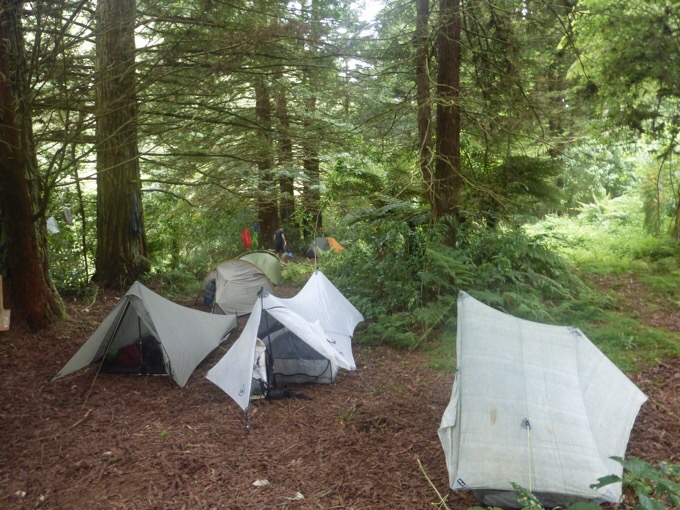 So, not a ton of miles covered today, but still an eventful and productive day in many other ways. Yep, this is what it’s all about! I had a terrible time blogging tonight because I couldn’t stay awake thanks to the sounds of rain on the tent and the white noise of the river. I kept dozing in and out, so hopefully it makes sense.