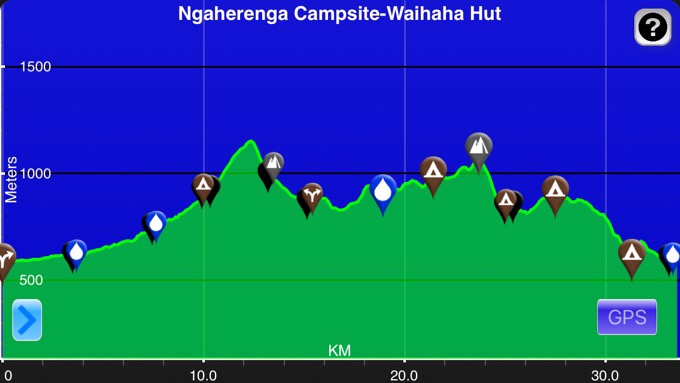 The birds were up bright and early before 5am and woke me up. I don’t know how anyone could possibly sleep through that. I tried to go back to sleep and ended up starting the day really groggy, but thankfully, that soon passed. We set off with Vittoria at 7am and hiked most of the day together. Today is the first day since possibly the first leg on Ninety Mile Beach that we didn’t walk on a road all day. It was a full day of actual trail in the woods and it felt like we were really hiking! 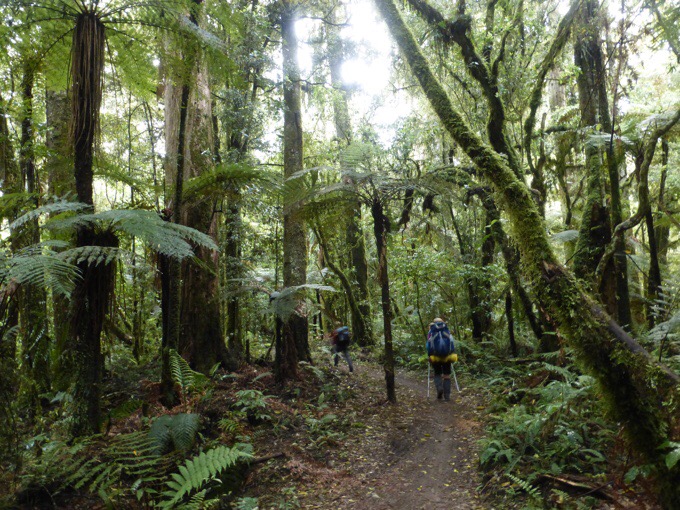 The track we started on was actually a bike track called the Timber Trail. It was such a well maintained trail! I had noticed that it looked like a major machine had cut the trail and that it had gutters along the side to divert the water off the trail…like a real maintained trail! We even came upon some men maintaining the track and that was cool to see. I know the TA trust would like to see this trail rank among the best in the world, and it is still young. I’ve seen plenty of evidence that the trails can be maintained out here, but it must just be a lack of funding. It will be interesting to see how the trail evolves over the next decade or two. I can say that today we had a lot of joy and energy on a trail that made it so we could enjoy our surroundings without having to look down at our feet so much and expend a lot of energy staying upright. The first part was beautiful, mossy, and really green. 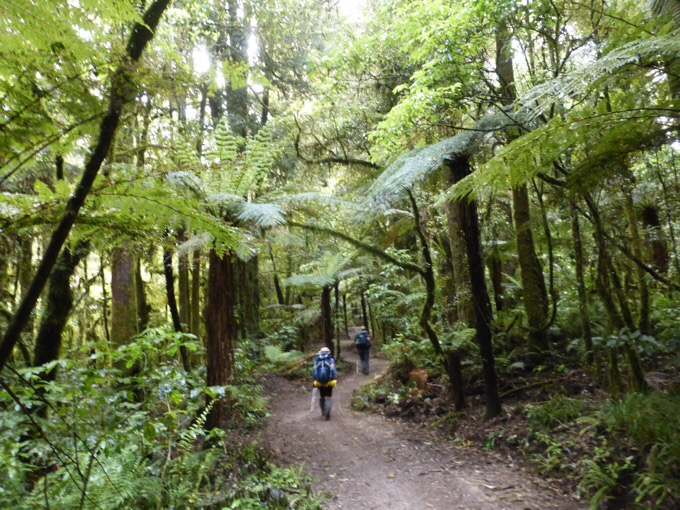 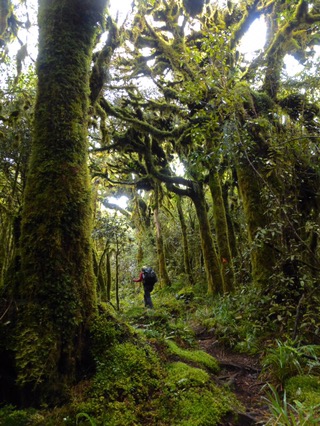 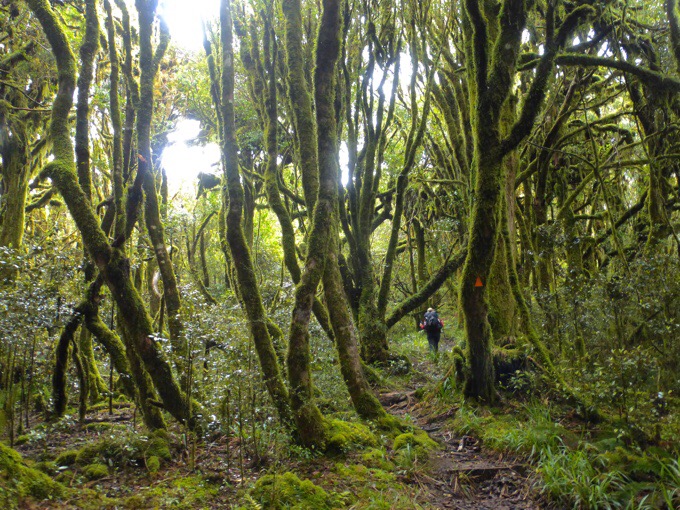 However, we of course didn’t stay on the Timber Trail all day. We had two summits along the way that diverted off the trail and became more rugged and muddy. Nothing terrible, but for sure plenty of the feet sucking mud we’re so accustomed to seeing on the forest tracks. The first summit was Pureora Summit, our highest point thus far at 3822ft/1165m. The clouds were still trying to burn off as we approached the summit and we hoped for a view. Fortunately, we just barely got one with low lying clouds. We had fun taking photos up there. 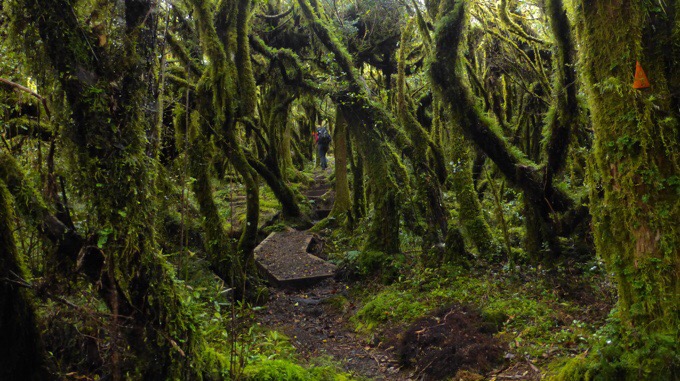 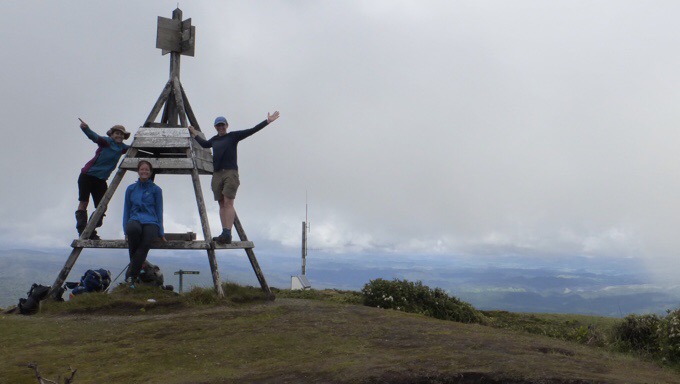 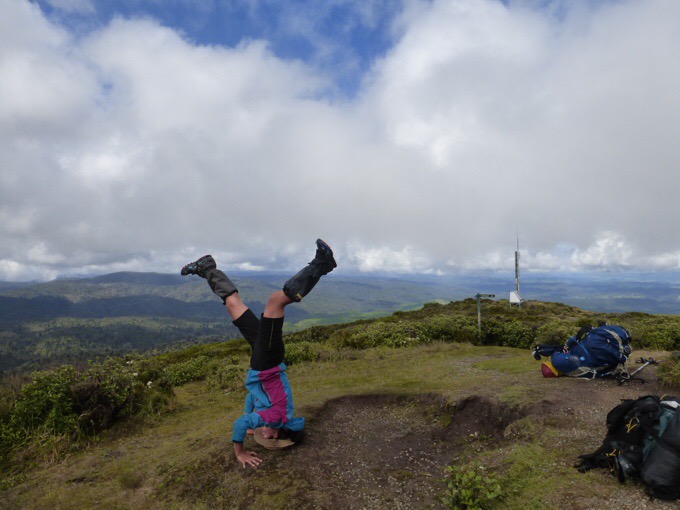 Heading down was more rugged and muddy for a stretch. Just enough to really soak our shoes before getting back on the main biking trail. We decided to do a side trail to the Bog Inn Hut for lunch. It was longer than anticipated and was a solid 10mins each way, but it sure was nice to have a picnic table to eat at rather than sitting in the mud. 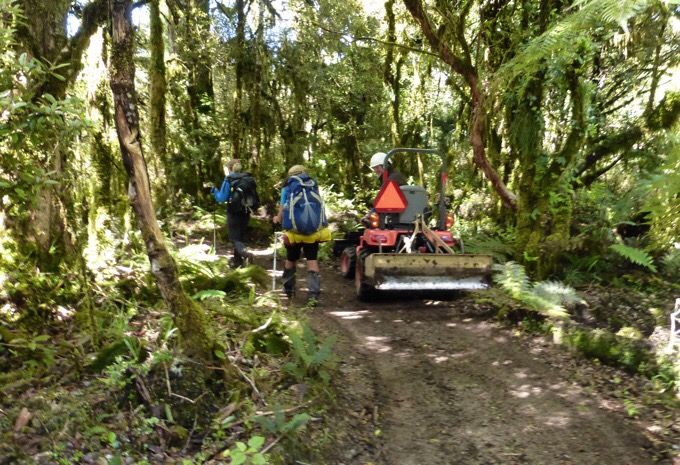 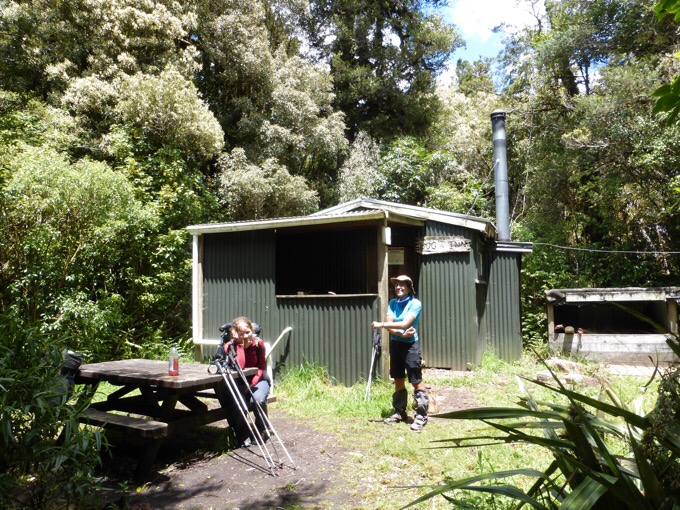 The bummer of the day is that somewhere between that hut and a couple hours from it, I lost my MP3 player. It had gotten wet yesterday, and I had it clipped to the outside of my pack to dry it out. I know it was there at lunch, and then I noticed it was gone an hour or two later. It may have been permanently broken anyway. I’m pretty annoyed with myself for both getting it wet and losing it. I tend to break or lose them, so I do carry a disk with all my songs on it for when I get a new one. I can also load my songs to my phone, but I like having the radio option on the Sansa Clip. I will make due with what I have on my phone, but I do want to get another one. Dang, I think I’d kept that one two seasons, which is really long for me. 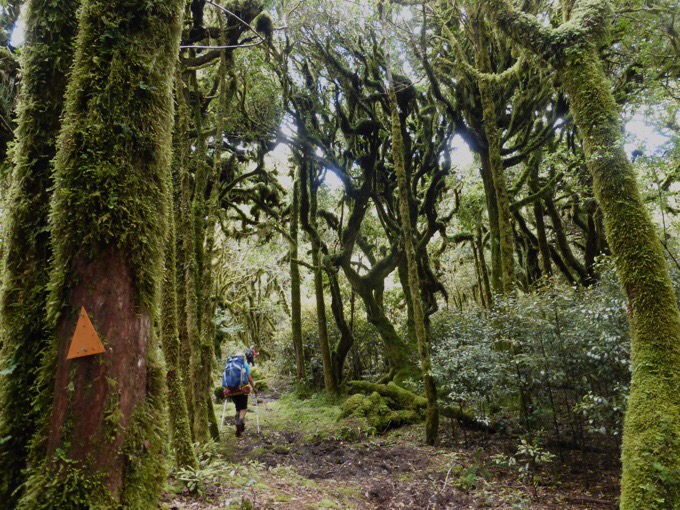 We had an option of making it to a hut at the end of the day, and since we made such good time in the morning, it seemed we could make it. We cruised on to Weraroa Summit, which didn’t have a view, but did have cell service which I didn’t get for the last day and a half. As we hiked up, it was good enough trail that I was able to load the last two days’ blogs while hiking. It is a timely process of about 15min/post to load them because the WordPress app requires that I manually load each photo one at a time only when I’m online. I’m glad I was able to do it while hiking so that I didn’t have to make Becky wait at the summit. We took about 20mins at the summit without a view (I forgot to take a photo) and then headed off for the final 6mi/10km to the hut. Along the way, we reached a big milestone, the 1000km mark! 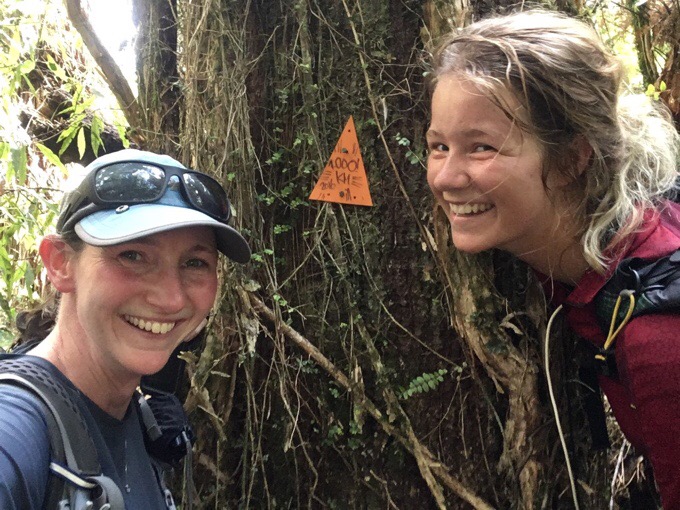 The terrain varied and had moments of clarity and mud and brush. The cumulative miles of today and yesterday were being felt, and the endurance of what we were doing was factoring in as our pace slowed. We had plenty of options to stop earlier, and probably should have. With a carrot like a hut at the end, it can be difficult to resist pushing a bit more. There is a cold front moving in tomorrow and rain is predicted, so we also wanted to get miles in today while it was still good weather. It would be nice to be inside if the rain came earlier than expected overnight. 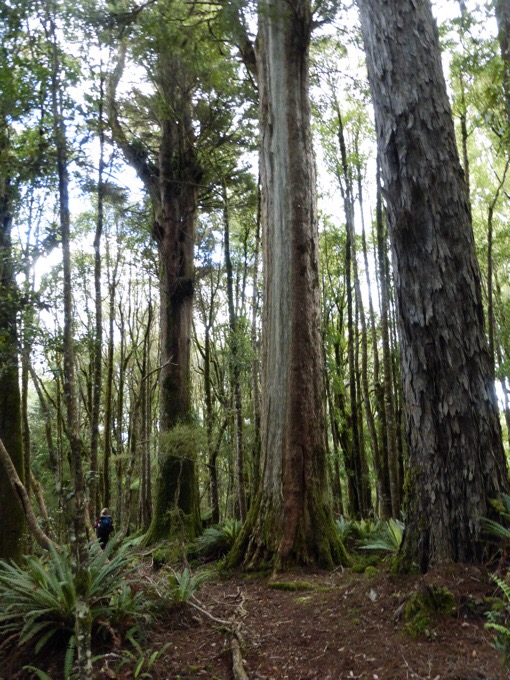 Unfortunately, the last couple km to the hut was quite challenging with some of the steepest ups and downs you can possibly have without it being a ladder. One of them was such a drop down that it was like looking over a cliff and was dizzying. It was a tough way to end the day mentally and physically as we thought we’d get to the hut before 6pm, but didn’t arrive till 6:45pm, well past the time we both like to be done for the day. 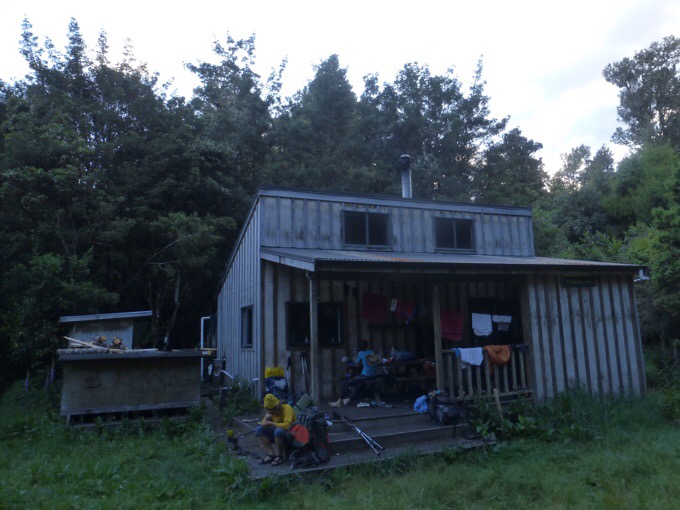 There were four TA hikers there we’ve yet to meet (a young Swedish couple and two older Kiwi women who were friends). There were 10 bunks in the hut, and there was plenty of space. It was nice inside, and with the incoming weather, I decided to stay inside. The three other hikers that have camped with us the last couple nights are also here and chose to camp outside. 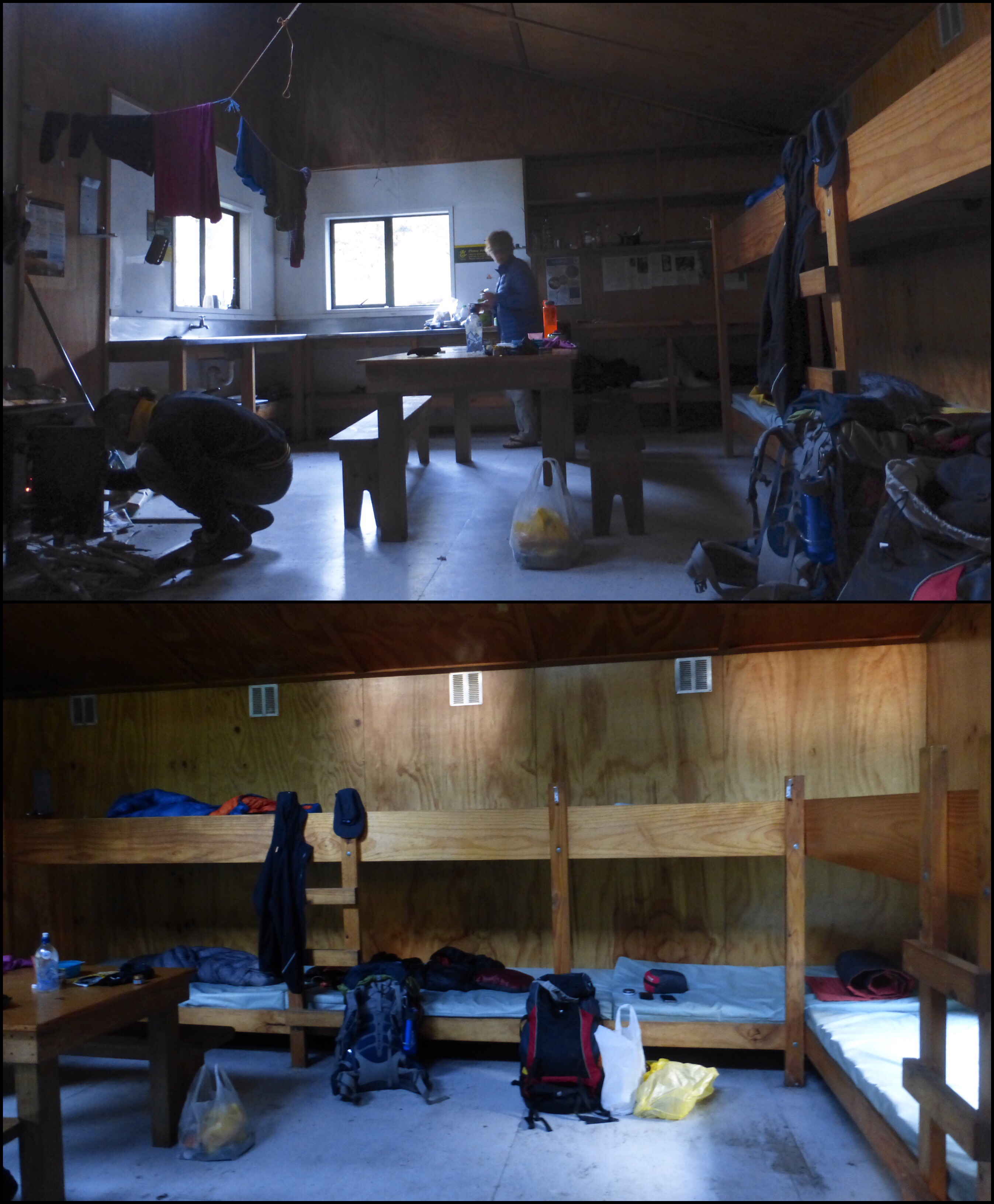 We went about an hour too long today and probably should have stopped sooner, but didn’t expect the last couple kilometers to take so long. It’s tough to know as it’s my endurance rather than speed that works in my favor. I can do days like this back to back for multiple days and still feel fine, but I know that isn’t normal at all. I’m willing to back off a bit, but we are still learning where the line is for Becky and she is wanting to see what she can do. Her speed has shot through the roof, and it’s been really fun to keep a brisk pace in challenging terrain. I can barely keep up with her speed, and it’s fun to have a challenge. Vittoria too had a lot of fun with using us as motivation. She said (with her Italian accent) that Becky was a beer and I was a pizza in her mind that she was chasing all day.

Another factor is that Becky is wearing my old pack that is too small for her. although the weight is much lighter, it is all on her shoulders because the pack can’t sit properly on her waist. A new properly fitting pack is coming in two towns, so Becky is gutting it out until then. She is starting to have chafing (it’s really humid out here) on her hips and lower back that isn’t fun. It may be a shorter day tomorrow given the weather and all we’ve done the last two days. Still, today was a great full day on trail without roads!