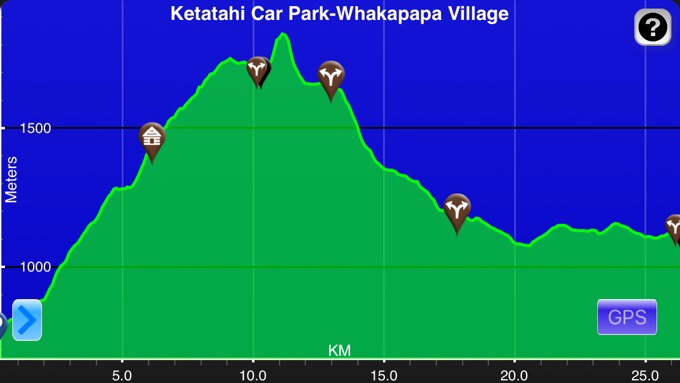 Today was the Te Araroa shuffle day. The weather for the Tongariro Crossing is perfect for tomorrow, so rather than waste today waiting, we decided to hitch to the end of the Crossing (Whakapapa Village) and walk the 12mi/20km section that follows the Crossing from Whakapapa Village to National Park. We had a group of five that left from the Tongariro Holiday Park this morning. We split into two groups about 20mins from each other to make hitching easier since no one would pick up a group of five hikers. Becky and I headed out with Tom at 7:45am and got the hitch in minutes from the second car that drove by, yay! We waited in Whakapapa a bit and used the iSite’s wifi until Ned and Frits arrived. We all took some time on the wifi and started hiking around 9:15am. It started out as a great maintained trail for an hour or two. We started with a view of Mt Rapaheu and a fun group shot of how cold it was. We were five people from five different countries. I do love the international draw of this trail. 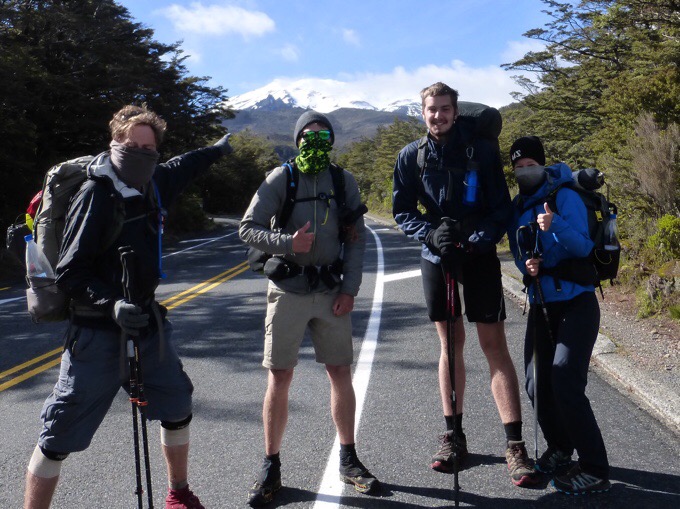 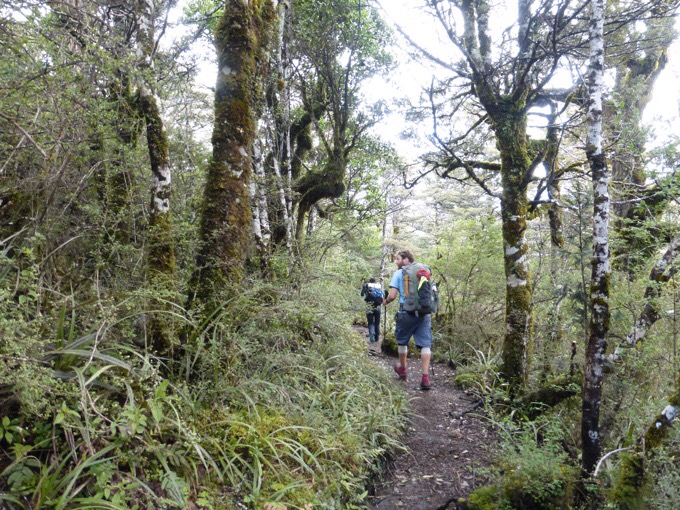 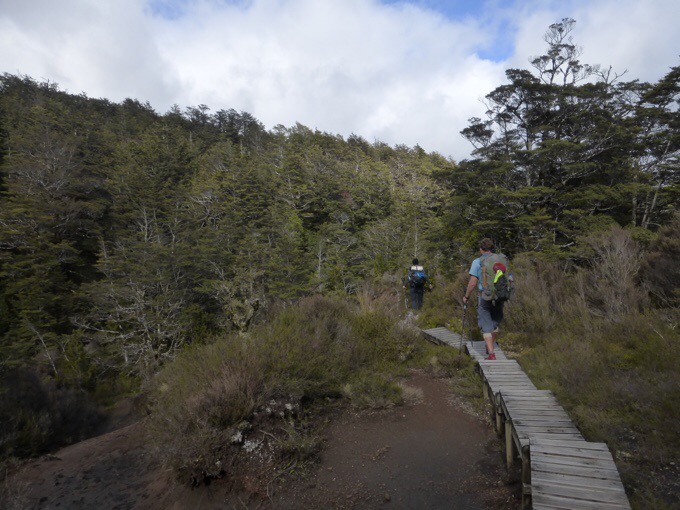 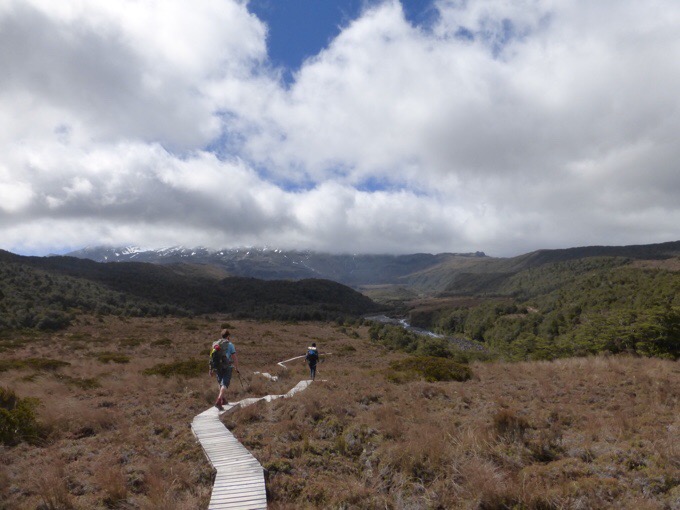 A clouded in Ruapehu 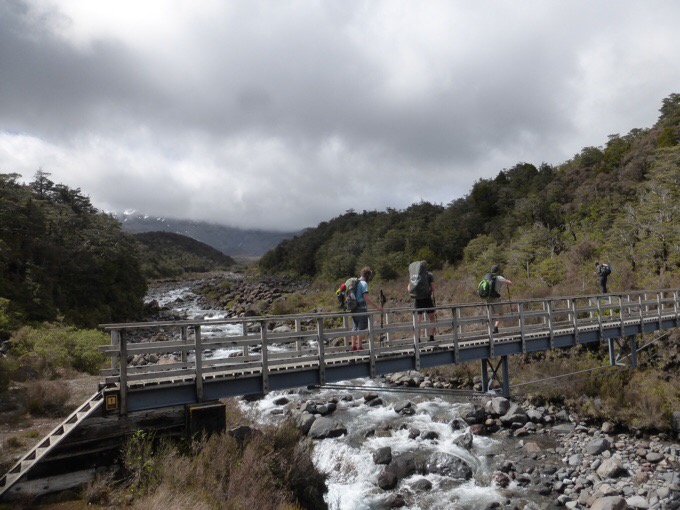 From reading my friend Buck-30’s TA journal, we knew it would eventually change to the less maintained trail we’ve come to expect on the TA. It was the classic fork of the trail where we reached an intersection and saw a beautiful boardwalk straight ahead…and the TA turning right into a field of tussock (tall grassy clumps) and a path that was more a narrow drainage full of water than a trail. Classic. 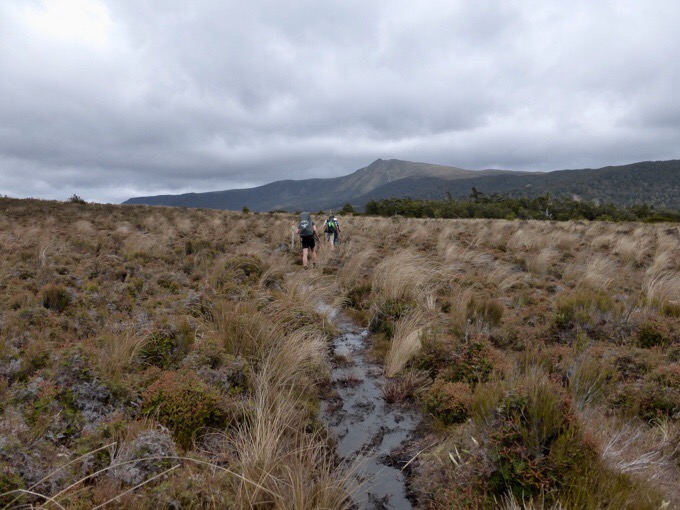 We didn’t mind much at all because it was a great day out! It was clear and cold out with some wind, but finally no rain! Word was that up on the Crossing, winds were gale force. At the iSite, all tour groups were cancelled. The online forecast had gusts at 60km/37mi/hr and near freezing temps with the wind chill, but some sources at the iSite were saying it could be as high as 100km/62mi/hr winds. Yes, doable by TA hiker standards (some chose to still go today) but not as enjoyable as tomorrow will be. Back to today, with all the rain we’ve had, the trail was mostly waterlogged and muddy to National Park, but quite scenic. 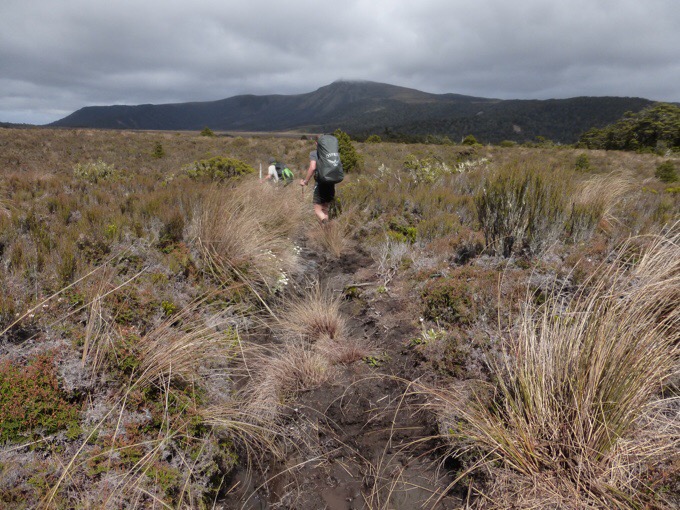 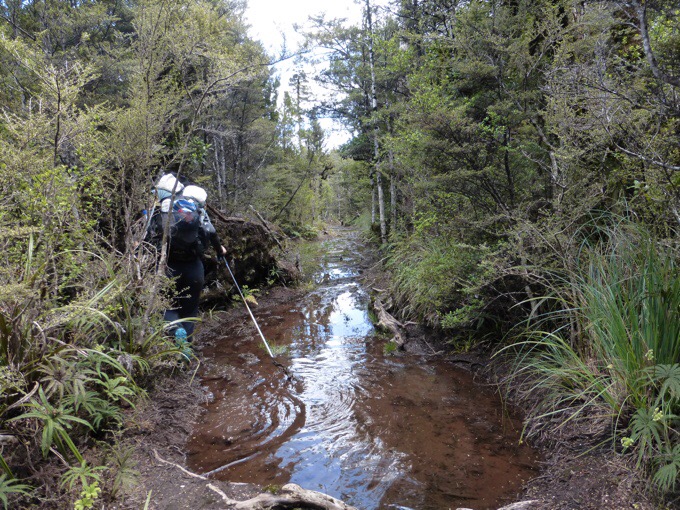 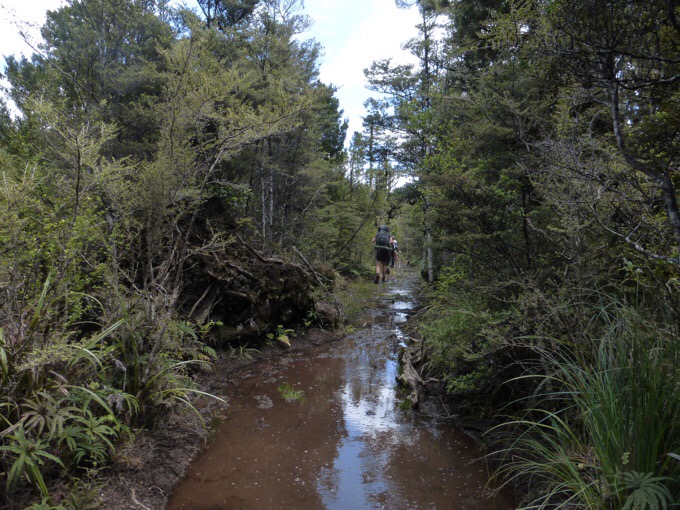 All day, we had views looking at Mt Ngauruhoe (Mt Doom) and Mt Ruapehu. It was pretty exciting to look at Mt Ngauruhoe and know we’ll be summiting it (side trip) tomorrow. It will be Becky’s first mountain and is totally fitting given her love of Lord of the Rings. 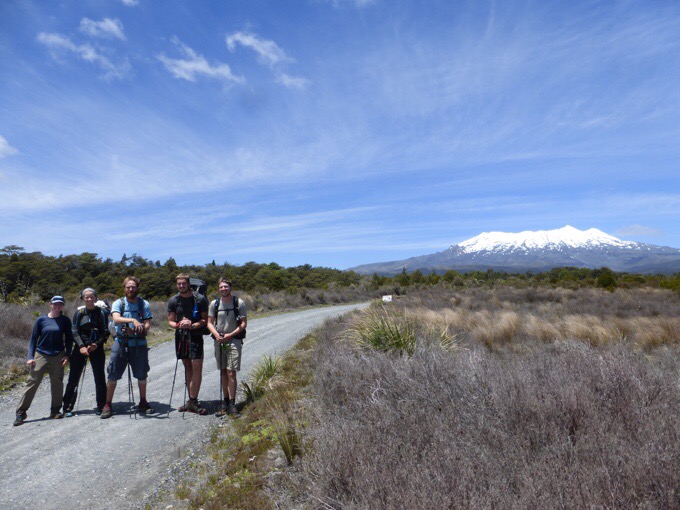 We had a relaxed day with lunch by a stream and then a 4mi/6km highway walk to the Four Square (convenient mart) at National Park. Great views again of all the mountains as we walked the road. Mt Doom was behind us as we walked the highway. 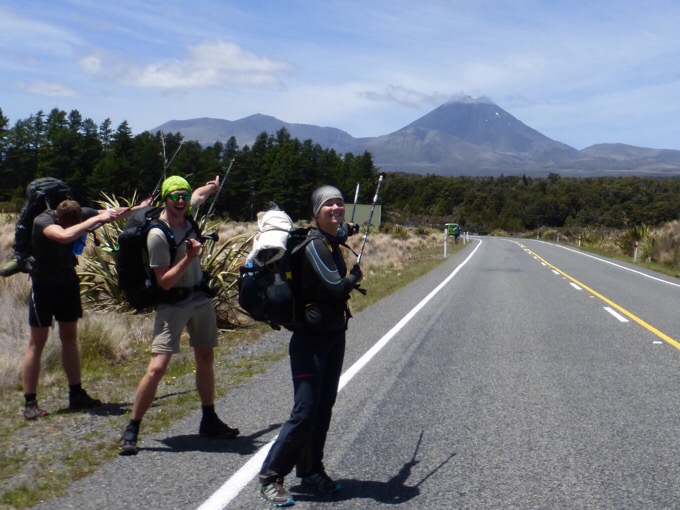 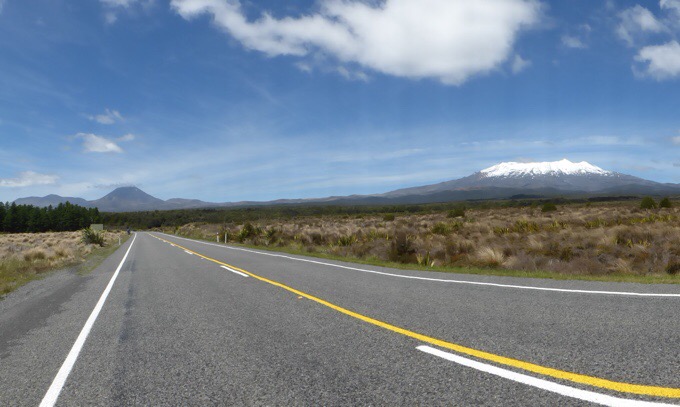 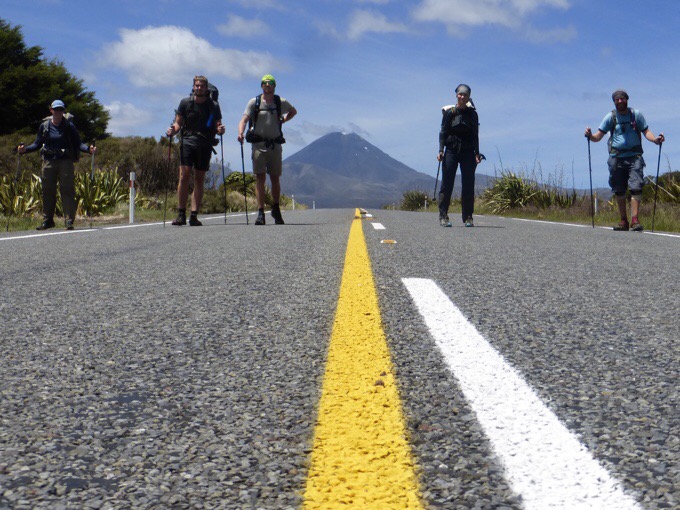 When we got to the Four Square around 3pm, we each grabbed a bit more food for tomorrow and filled up our water capacity since there isn’t any water where we’ll camp tonight and for most of the Crossing tomorrow. We headed out to the corner to hitch and immediately got two cars to pull over. The first one could only take four, so I volunteered to stay back because I had service there and could get things done while I hitched. Well, the next car that drove up, took me and we all drove off at the same time. We got dropped off at the Holiday Park that we stayed at yesterday, and still had a 5mi/7.5km walk to our camp spot at the trailhead. As soon as the cars drove away, I realized my umbrella was missing! Shit! Again!!!

We went through photos from today, and by process of elimination, it had to be at one of three places along the road that I set my pack down. It was 4pm, so I had plenty of time to hitch back the 20mins or so to the Four Square and then return to meet the group at camp later. Ugh! I immediately got the hitch and they were nice enough to stop so I could check the two places I’d set my pack down before the Four Square…no umbrella. Then I went on to check the Four Square and where we hitched across the street…no umbrella! Shit!

I have no idea where it might be other than someone passing by and finding it maybe before I got back to it. What’s crazy is that I didn’t take it out of my pack today. It would have had to fall out somehow. I’m totally stumped on this one! There’s no way it fell out in the car I hitched in, but the woman has my card to contact me if it did. So, unless the crew that hikes through tomorrow finds it, that will be the third umbrella I’ve lost in the last five months, ugh!!! I immediately got a hitch back to the Holiday Park and got to walk off the frustration on my own on the walk for an hour and a half. 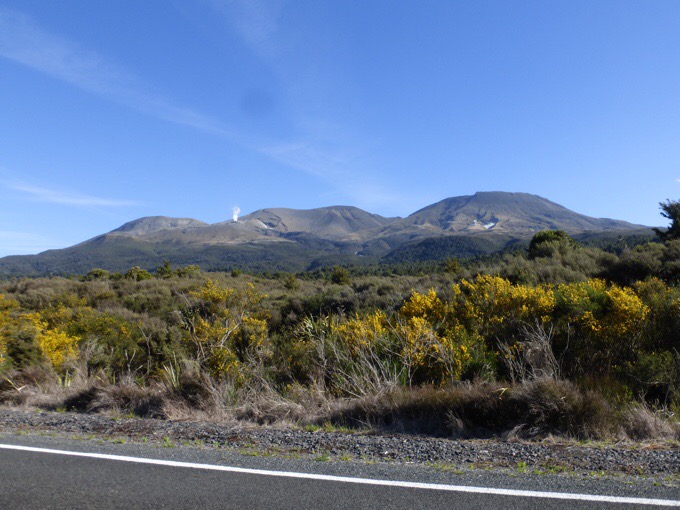 I have to say that I feel like I had this one coming. Today was just too perfect and I knew I was doing something that felt unlucky by shuffling the sections today. Never, in all my thru-hiking, have I jumped ahead and done a section without walking there on my own efforts. It’s stupid, but it did feel like I was jinxing myself by breaking the continuity of the hike. Yes, I’m still hiking all of it, but the sequence and continuity was broken. Although I loved today, and it was a perfect day to hike, and it sets us up for a great day on the Crossing, it was a bit of a jinx. At least it wasn’t a broken leg. I might buy a temporary one in National Park after we do the Crossing tomorrow, but I am for sure ordering a new one to be delivered to Wellington or sooner if possible, ugh!

So other than the classic umbrella loss (once again!), today was great and it felt amazing to walk a full day after all these half days we’ve been putting in. When I got to the trailhead at 6:30pm, the group was there along with six other TA hikers. I had to get a shot of Becky and Frits together. Both are 20yrs old, and affectionately referred to as the trail babies. Frits is four months younger and is a giant. He is exactly 2m/6’7″ tall. He is from Holland and said that Holland is the world’s tallest country. He said he is just average where he lives because he lives in the tallest state in Holland and the tallest province in his state. 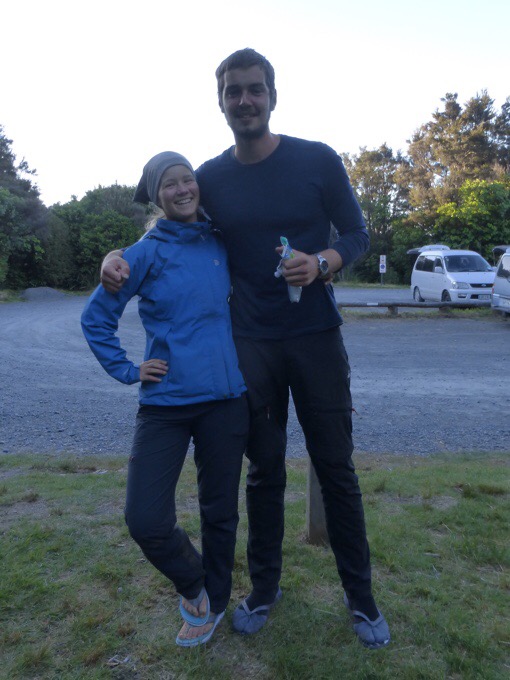 There are also four cars parked and people sleeping in their cars. It’s going to be quite awesome tomorrow, and Ned had the great proposal of us going up before sunrise to see the sun come up as we hike up. Our group of five decided it would be worth doing. We are getting up at 3:45am so we can start hiking up at 4:30am and see sunrise as we head up. I’m so happy to be with a group that wants to do something like that. Becky made me promise we could spend the whole day out there if we wanted and not rush it. I’m totally up for that. We will have all the time we want to soak it in. We all headed to bed by 8:30pm so we could try to get at least 6hrs of sleep in. How am I supposed to sleep with all this anticipation and excitement!? 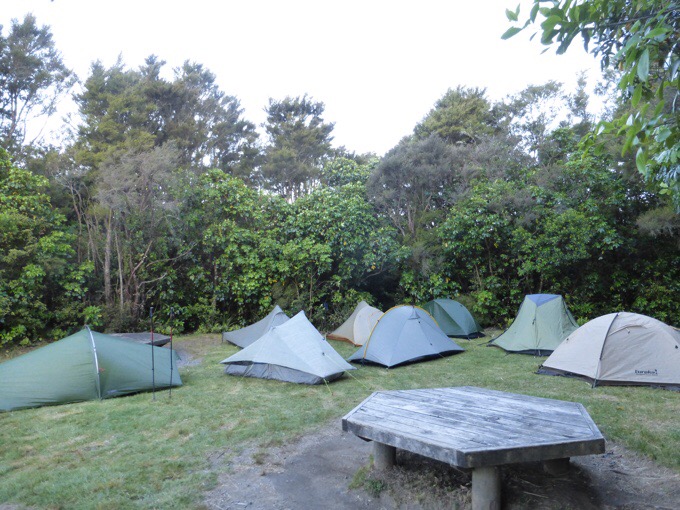 Oh man, it’s 9:30pm and I’m the only one awake and Will and Felix just arrived! We heard they might make it. It turns out that they decided to do the bonus hike of the rest of the Tongariro Northern Circuit today. The Northern Circuit circumnavigates Mt Ngauruhoe, and the Tongariro Crossing is part of the Northern Circuit. Today, Will and Felix did the part of the Northern Circuit that isn’t part of the TA, and they will do the Crossing part tomorrow. They loved it and said it’s totally worth doing. Dang, I could have done that today and was just not motivated. I had the impression it wasn’t anything more than I’d see on the Crossing. It’s still possible that I could squeeze it in the day after tomorrow, but they haven’t seen the Crossing section yet to compare it. Maybe I’ll find out more on that tomorrow. Now another TA hiker has arrived and is pitching his tent, so we have 14 TA hikers camped here.