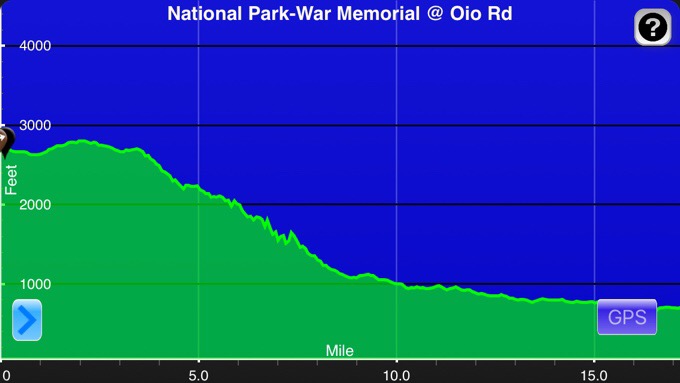 We all got sucked into the hostel vortex and didn’t leave town until 3pm. Don’t even ask me how, but I still managed to watch no shows, dang! I hadn’t done yesterday’s post, and had lots of photos to go through, so that one took a good deal of time and energy in the morning. Although, it was a nice day outside, I was happy with the decision not to squeeze in the rest of the Northern Circuit as a bonus day today. It would have been a push to do it today and then the next day would have needed to be another big day to still make the meeting point for the canoe launch on the Whanganui the day after tomorrow. So, I did the usual of the blog post, catching up on emails and correspondence, and Skyping with my sister. I tried to load Survivor to watch offline and it would load for awhile and then crash for some reason, dang. Looks like it may not be until Christmas that I’ll watch the finale.

We all needed a day and a half of food for the days of walking up to the canoe launch. Some bought it from the Four Square in National Park, but it was pretty pricey, so Becky and Frits decided to hitch about 40mins to our last town of Taumarunui where there was a real grocery store. Also, the canoe company was there, and they hoped to add more fun heavy food to their canoe resupplies we will get in a couple days. They planned to drop it off, but coincidentally ran into the canoe guy at the grocery store and he took the food in exchange for them (Frits) helping to load some canoes for him. Nice coincidence! Becky was nice enough to grab me food as well, so I saved some money and didn’t have to spend the day hitching and shopping. She didn’t take her phone because it needed to charge. I joked about my worries letting the “trail babies” go off on their own, especially without her phone. Frits had his, but it is still silly how strong my maternal instinct is with her in particular. Becky knows this and jokingly messaged me through Frits when they were on the way back saying, “Hi we are back soon, only got almost kidnapped and buried in a hole in the bush once.”…I tell ya, the smart ass sarcasm of kids these days…ha;) 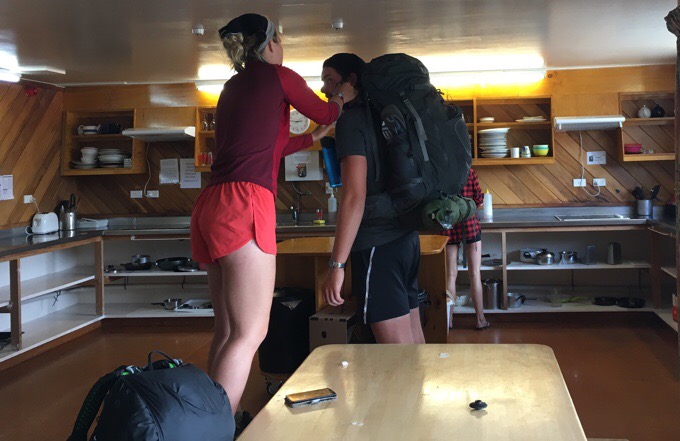 A Frits pack adjustment requires Becky up on a bench to reach with how tall he is.

So after the day somehow flying by, six of us (Tom, Ned, Frits, Becky, myself, and Calvin not hiking roads that we’ve overlapped with before) headed out at 3pm. We need to do 33mi/53km over the next two days to land at the camp spot where we will reunite with the others (and many more who have decided to launch the same morning) to get canoes on the following morning at 9:30am. Still, I will explain the details of the canoe tomorrow as we get closer. Had we done the rest of the Northern Circuit, we would have had a much tighter turnaround, and would have had to fit the 33mi/53km into mostly one day and a morning. Possible yes, but a tiring push after already being tired from the Tongariro Crossing and Mt Doom yesterday. So we all headed out at 3pm for what we knew was mostly a wide downhill bike track called the Fisher’s Track. It was much more scenic than we expected and was a very nice walk. 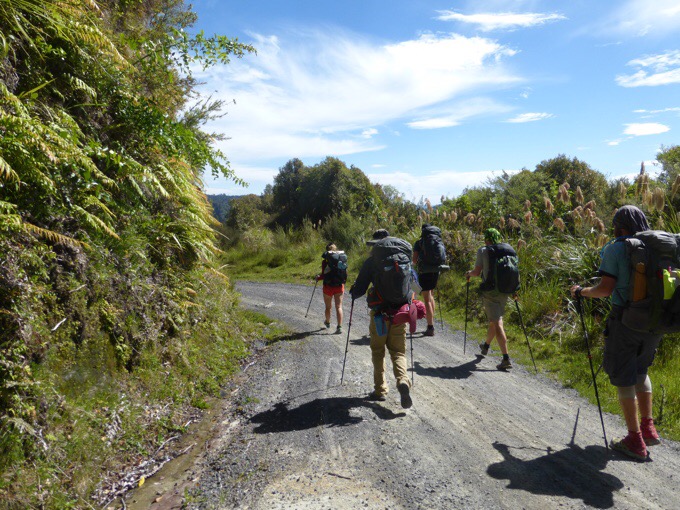 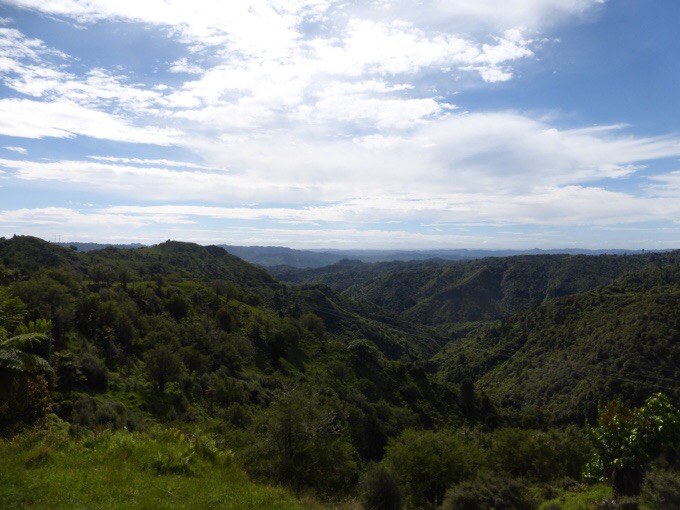 We planned a relaxed walk, but weren’t exactly sure of where there would be camping options as this section is less specific in our notes and on the Guthook app. We saw plenty of water and figured there would be spots somewhere. We hit a good one at 5:45pm, but decided we were in the mood to hike more today. Tomorrow may be a day of rain, so we figured it would be nice to walk more today if we were in the mood. 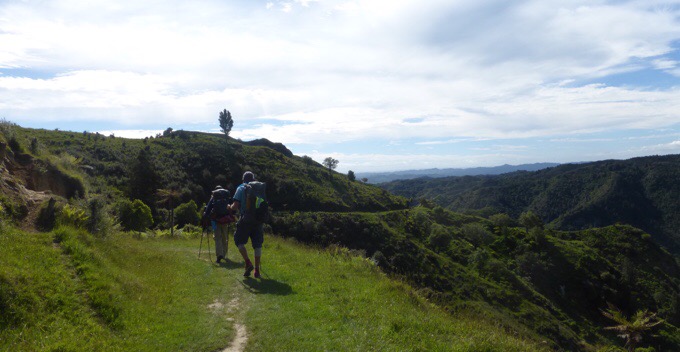 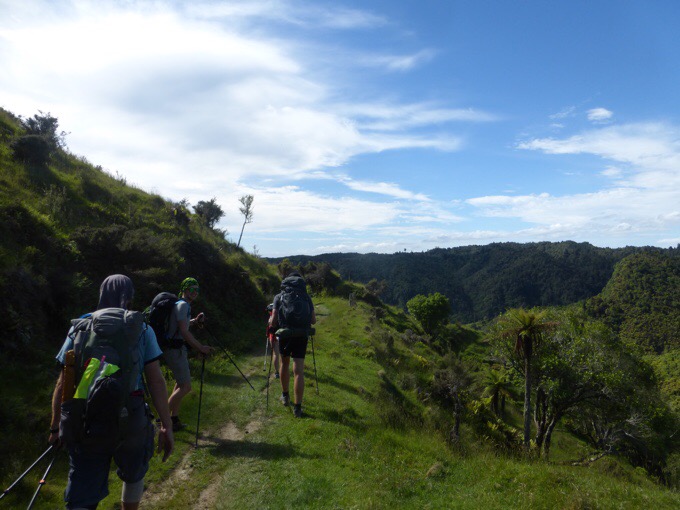 As we walked on, the land became more private with limited options unless we wanted to choose small patches next to fences right along the rarely used road. The guys made a decision at 7pm that they wanted to push on 4mi/7km more to a War Memorial that they had heard had water, a bathroom, and space to camp. I wasn’t clear on if it was an ok spot to camp and didn’t want to be disrespectful to the memorial area, so we chose to hang back and scout other options. 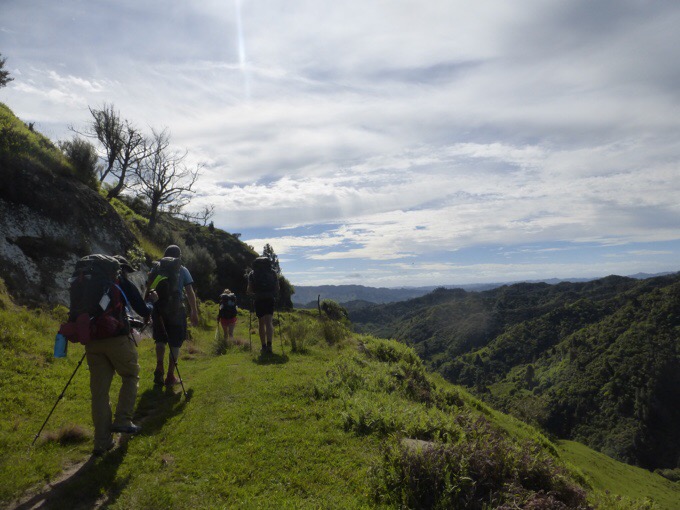 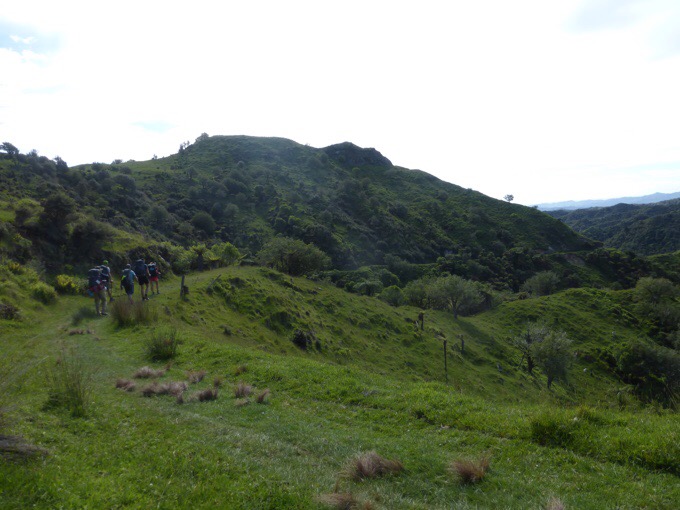 We walked by a home and asked a woman who apologized and said she gets asked all the time, but isn’t interested in letting people camp on her property. Completely understandable and she even said she’s honestly over it. I totally get that and wonder what the future holds as more and more get on the TA and there are limited public spaces to camp. The woman was nice, and mentioned the War Memorial at the end of the road and that there was camping there that everyone uses. She even offered to drive us there. After hearing it was a known camp spot, I was more comfortable with it, and we decided to make a go for it. We decided to make a go for it and play a game of rabbit, which is what we do when we are catching up to someone ahead of us. Becky is quite a fan of this game as well and we had a lot of fun with it. 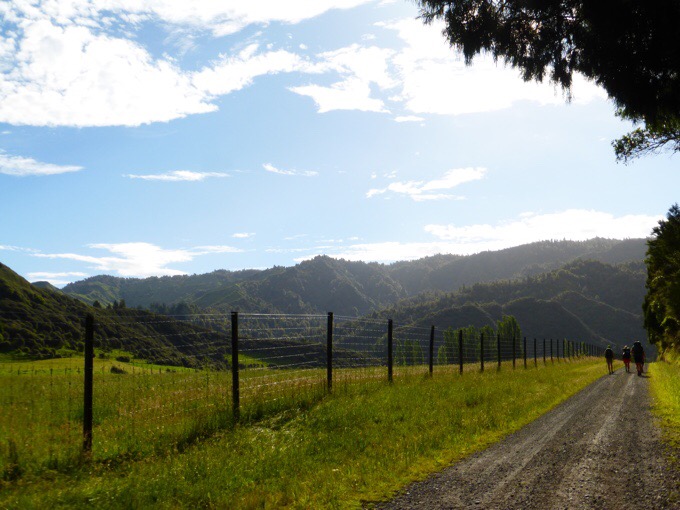 Over a week ago, we had our best one yet when we caught Tom on a long road walk. We saw him way in the distance and spent a better part of an hour catching up to him. He had his headphones on and no idea we were there and scared the crap out him. Oh, the fun, ha! Well, we had fun doing the same thing tonight. We played a game of walking fast and then running on downhills between self-chosen landmarks. Since our packs are empty, we could practically sprint and were entertained. We caught up to Calvin, whose body doesn’t like road walking, and got him to join in for a bit too. My favorite moment was when we were running and Becky with her childish excitement and energy looked back at Calvin (who is not a road walker and best described lovingly as a tech nerd with a very heavy pack) and said, “Isn’t this fun Calvin!?” Without a pause, Calvin dryly responded, “It’s something…” Cracks me up the variety of people thrown together out here! 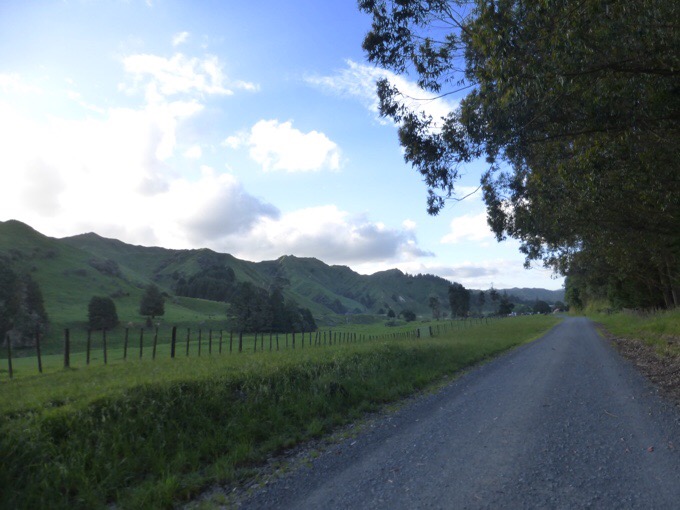 We did catch up to the guys after a bit longer, and gave them a good jump. That gave them a good push the final 30mins and Tom joined in on the fast walking as Becky played some heavy metal (more like rock for my sake) out loud. Tom is also a fan of rock and heavy metal, so it was a good motivator. We did see two TA hikers camped along the road that are also joining in on the same canoe launch. Becky played some good songs out loud, and I may be gaining some new songs by the end of all this. One had that crazy screaming in it that sounds satanic and I just don’t get it, ha! 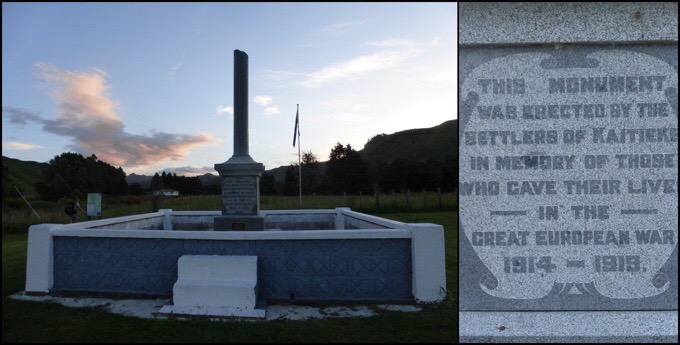 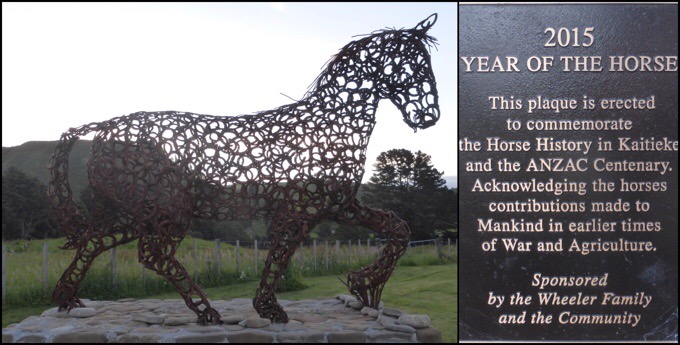 We ended up doing a lot more than we anticipated, and are fine with that as it will give us an easy day tomorrow if it rains a lot. So a short day, but still a long one. We actually did the same distance as we covered doing the Crossing yesterday in just 35% of the time. The ease of miles vary so much out here. Since we are 15.5mi/25km from our canoe launch point at Whakahoro Campsite, and we did 17.2mi/27.7km after 3pm today, we joked that we just need to leave by 3pm tomorrow. It will be nice to sleep in.

**Note: The next 5 days or so will be along the Whanganui River, so I’m not sure how much service I’ll have. No worries if the posts have a gap. You can still see the daily progress on the “Where’s Wired” tab.