We had just a couple hours to town, and big plans for Christmas, so the group impressively chose a 7am launch time on the canoes, and most of us made it! We are close to the ocean, so the tide does have an impact on the water as we head into Whanganui. We were told that high tide was at 7:20am, and that we should be able to ride the tide out and cruise to Whanganui…if there isn’t any wind… Well, we had wind and rain. 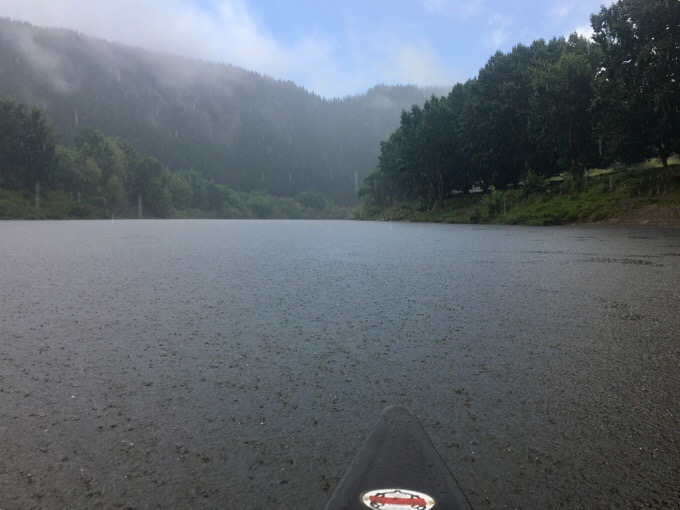 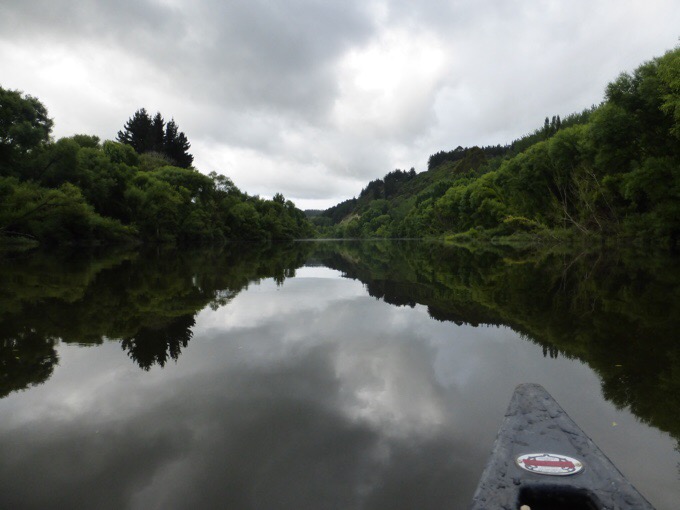 I don’t know how bad it would be with the tide against you, but it felt like we were paddling against the tide all morning. There was definitely no relaxing or riding the tide out as we had hoped. What we were told should have taken two hours took us three hours of tiring paddling. I won’t lie, although Heartbreaker and I made great speed together in the canoe, but are not the most compatible pairing, and we were ready for some solo time. 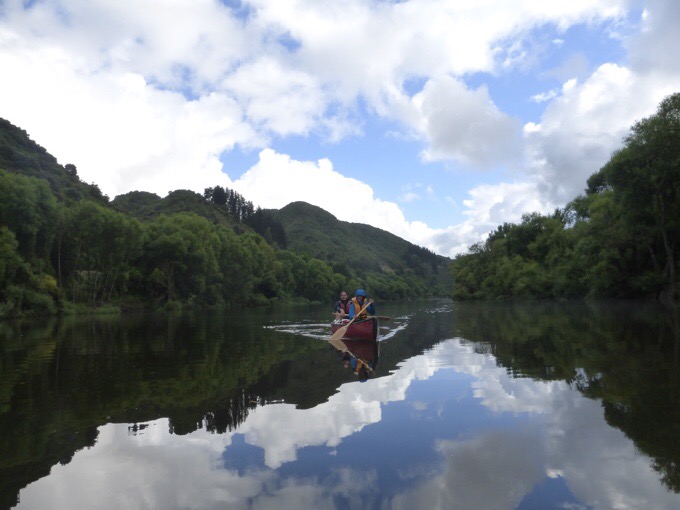 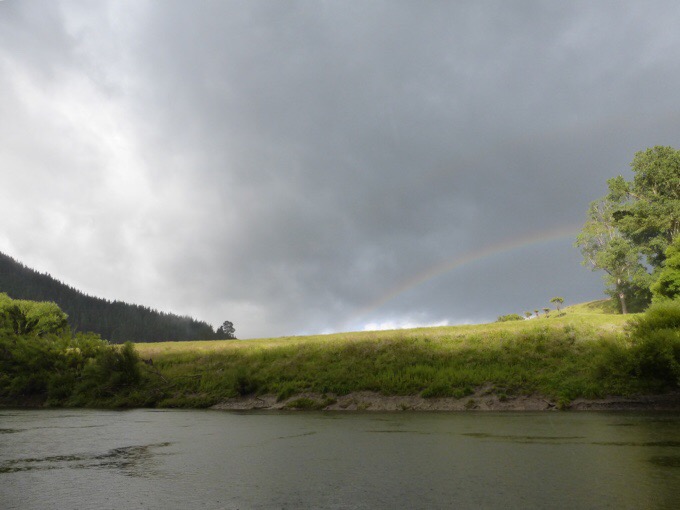 My assessment of canoeing is that it was a nice change of pace, but I don’t see myself wanting to do a large multi-day trip on a canoe. I did enjoy doing something new, and it was quite a unique experience. My body took to it just fine (other than some motion sickness at night), which I’m thankful for, but I don’t like being wet all the time, and found it to be more boring than hiking. I also think all of us are pretty independent spirits, and it is challenging to work in pairs and the larger group for an extended period of time. I definitely don’t feel confident in a canoe, and am really not comfortable in things that I can’t control. I mostly didn’t like not being able to multi-task. Your hands are always occupied, and even reaching down to get a drink of water, you have to stop paddling, and your partner has to pick up the slack. It’s amazing how quickly a canoe can turn or go completely sideways when just one slight adjustment is off. Then it’s double the effort to correct the direction. I especially didn’t like not having my camera accessible. I took much fewer photos because of the process it took to get it out of the dry barrel and the fact that it put all the efforts on Heartbreaker until I was able to paddle again. The scenery was really great, and I think I enjoyed it more in the river than I would have if I were walking the road next to it. So, overall, I’m glad to have had the experience, but it won’t be replacing hiking for me anytime soon. 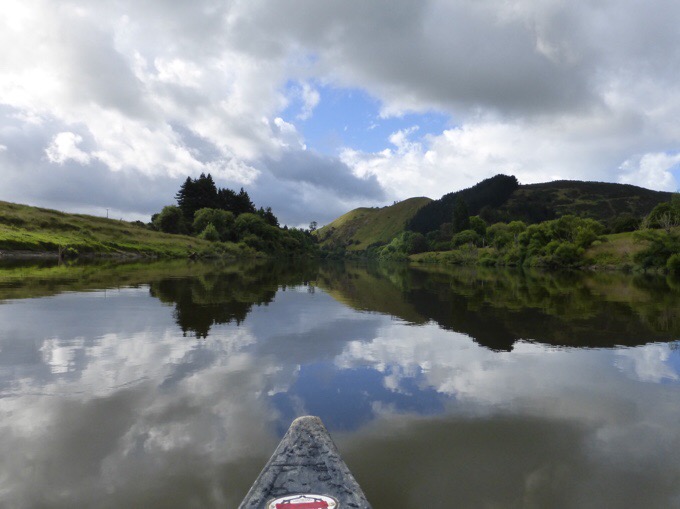 We got to the Holiday Park at 10:30am, and everyone was on a mission to get chores done ASAP. We were reunited with our packs, organized everything, and checked in. The majority of the group chose to stay in four person cabins, but there were so many cabins that we could spread out, and none had more than three. The Holiday Park is awesome, and welcomes TA hikers and gives TA hikers discounts. 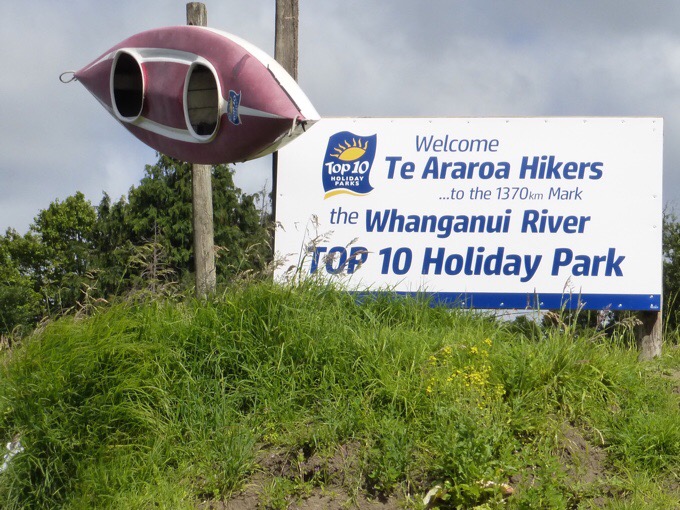 It was $25NZ/$19US to go in a cabin and $20NZ/$15 to tent. Yep, the cabin it was! While I was inside the main office getting the prices, I came out to see the “children” bouncing on the big trampoline outside the office. Classic! Later more joined in. 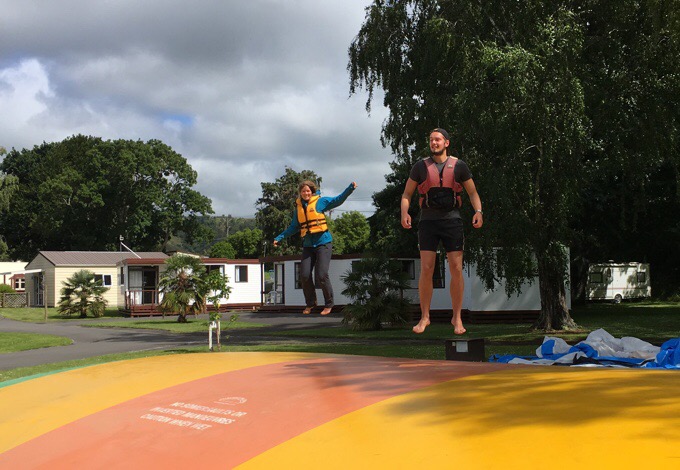 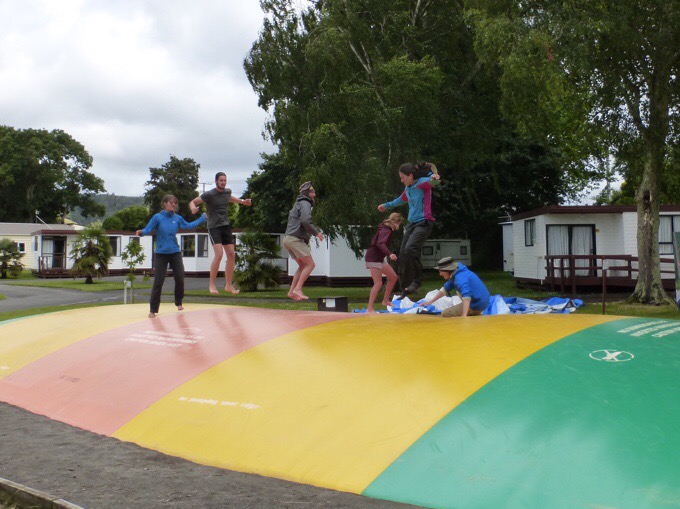 The Holiday Park is a 10min drive out of town, and provides a shuttle pretty much whenever anyone needs to get to town, which is so awesome! We all got dropped off at the grocery store and agreed to meet up after a couple hours for the ride back. The group decided to have a Christmas Eve dinner together, so we all chose our own meat to grill and each chose a side to contribute. We also decided to play the White Elephant gift game, and each got a secret gift for around $5-$10 for later. Becky and I also went to the Post Office to pick up her new ULA Circuit pack! She’s been wearing an old one of mine the last few weeks, but it doesn’t fit at all, so once again, a big THANK YOU to David for gifting Becky a new pack and a NeoAir sleeping pad! She also got a perfect new beanie from her best friend for Christmas. The makeover is complete and this is one happy hiker! 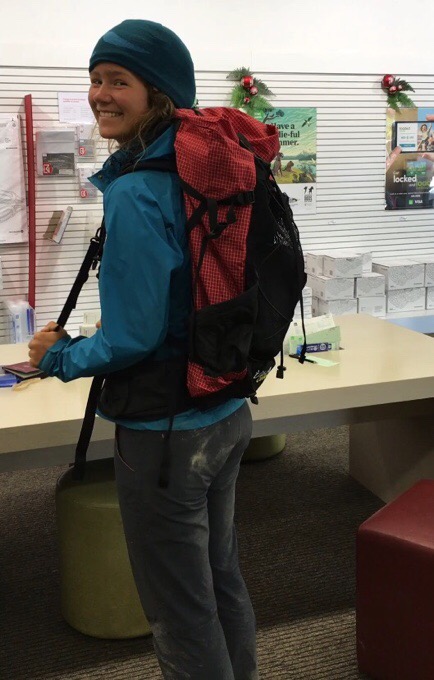 A new beanie and pack that fits for Christmas!

We were all back at the Holiday Park by 2pm, and then the showers, laundry, lounging, and gift wrapping started. I’m still amazed by the team work of this size of a group. Tom went home to Auckland for the holidays, so we are a group of 15 celebrating together. The dinner preparation started a few hours later and was great! Heartbreaker has been missing the German favorite, schnitzel (like a breaded and fried meat) and requested that Becky make that, so I had schnitzel for the first time. 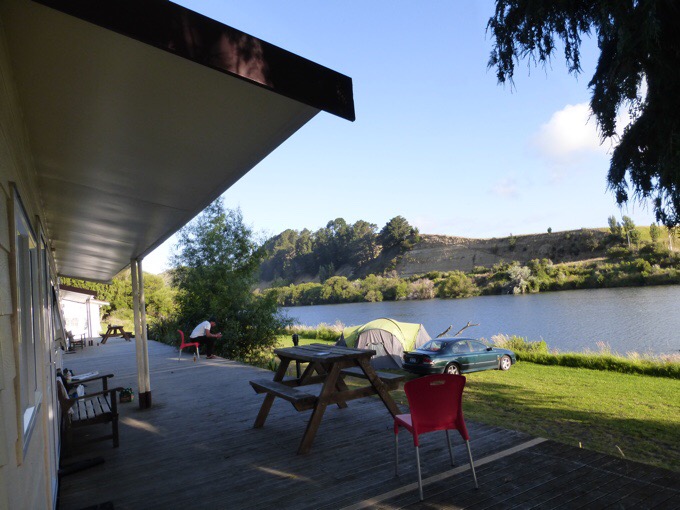 Riverside view from the cabins at the Holiday Park. 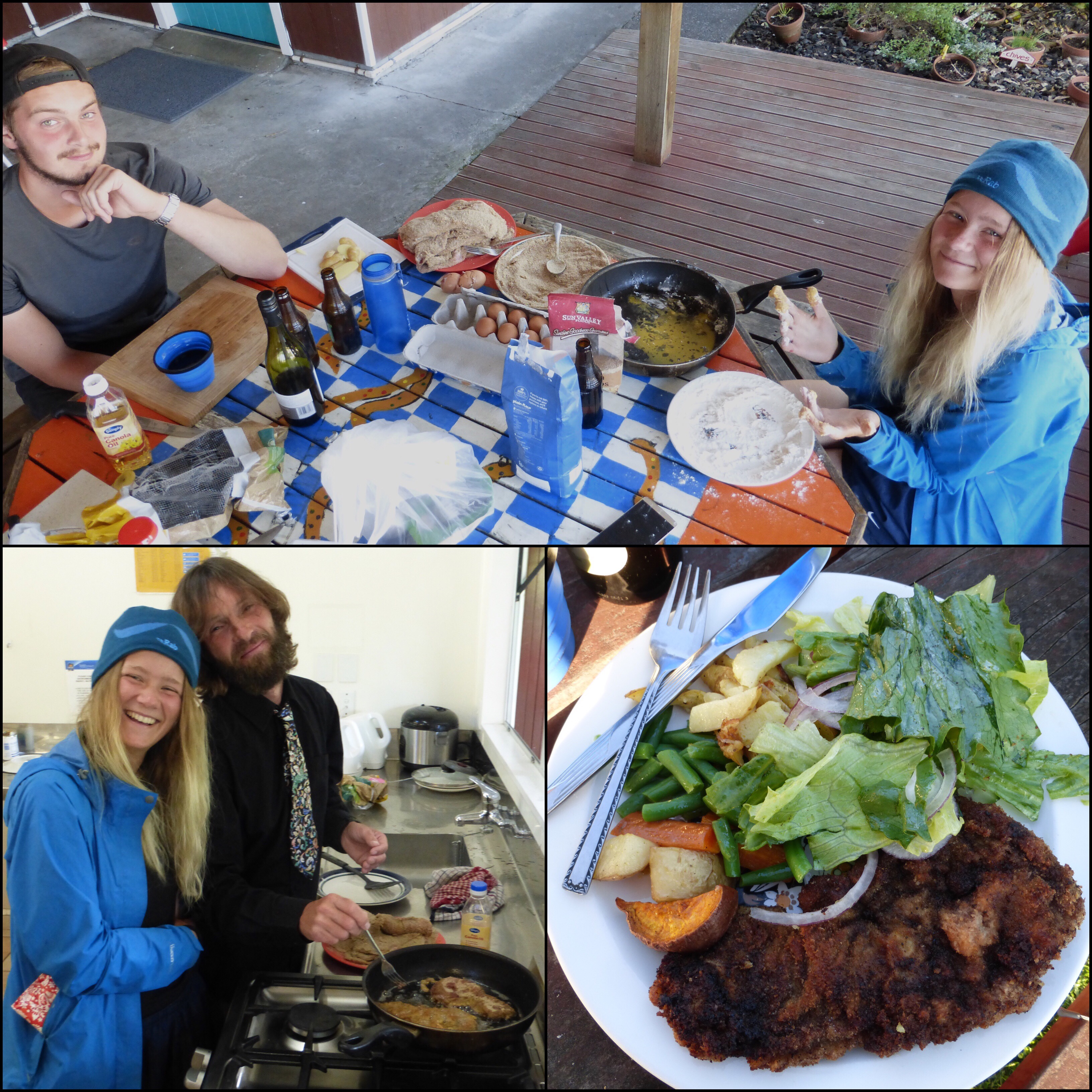 We all ate out by the grill, and then did holiday crackers where you each get a tube that pops when pulled apart and has little trinkets, riddles, and paper crowns. We stood in a circle and connected arms in a way that each end was held by the next person in the circle and counted down to pop them all at the same time. 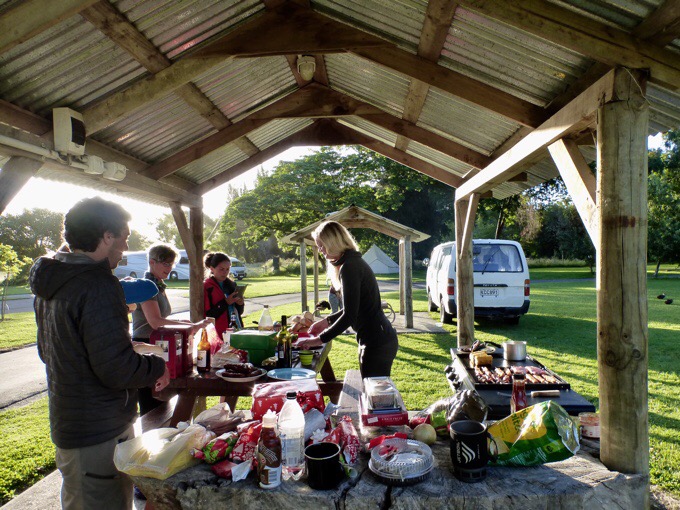 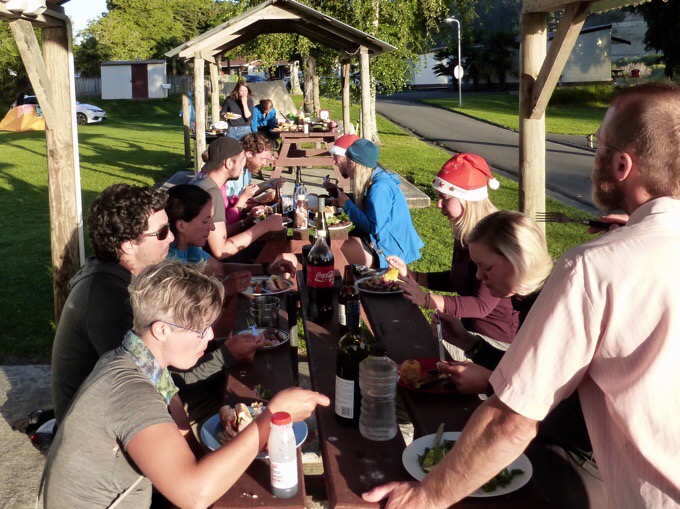 Then we did the White Elephant gifts where everyone gets a number, and when it’s your turn, you can choose a gift from the center, or choose to steal a gift that’s already been opened. There were some fun ones in there including a harmonica, many bars of soap, a huge exercise ball, and a pirate themed packet with a sword to go with our time on the water. Becky’s gift ended up being the most desired (a nice NZ-esque necklace and glow crown). Mine was opened last and was lottery scratch offs. I got a yummy gingerbread man and Becky fittingly got some nice chocolate and a long bubble tube. Matt ended up giving her the pirate sword after stealing the pirate packet from her, and Becky has vowed to carry that sword to Bluff! 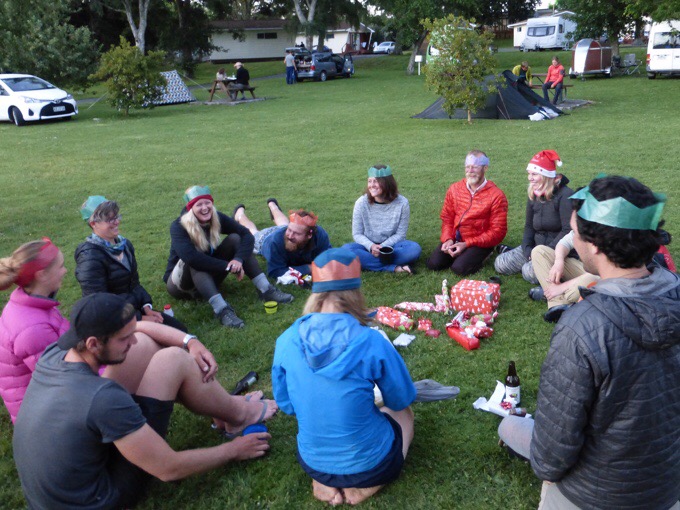 We moved inside for dessert and many stayed up late. Quite the day, and hard to believe we woke up early and canoed this morning. It’s been great to have this time with such a nice group, and we will all spread out tomorrow. Some hitching ahead of the road walking section ahead while others will leave at various times and will spread out surely over the next leg or two. I really appreciate this group and the uniquely international combination all coming together for Christmas. For those of you that have Facebook, you can see on my timeline (link is at the top of the blog) a video of this group wishing Tom a Merry Christmas in our respective languages. Definitely a memorable Christmas. Merry Christmas everyone!