Day 52: Christmas On The Road 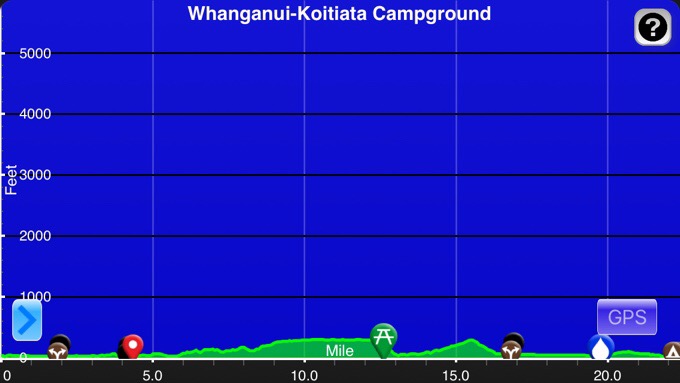 Since it was Christmas morning, and everyone stayed up pretty late last night, we got a relaxed start aiming to leave at noon. No one was champing at the bit to start the multi-day highway walk from Whanganui to Palmerston North. Check-out was 10am, and a few pairs headed out around then. With limited choices, many of us were aiming for a campground 22mi/36km away. It was good to have time to sleep in and catch up on things. I was excited to watch Survivor and finished all my chores around 10:30am. I bought $5 worth of data for my phone and found a couch in the lounge to indulge. As soon as I sat down, a hiker working on a project interviewing hikers asked to video interview me. By the time we finished, it was time to pack up and go. Man, I came so close to seeing the Survivor finale! It may elude me until my zero in Wellington in a week and a half.

When I came back from the interview, Becky and her pack were missing. I started to wonder if she started off without me when she returned with her new pack on. She said she had been in the bathroom looking at her new pack all loaded up in the mirror. Yep, like a kid on Christmas, she was pretty excited to finally have her very own lightweight pack (ULA Circuit). I headed out with Becky and Frits at noon while others planned to trickle out and find stealth camping somewhere along the highway. It felt great to be back to walking again after five days in the canoes. I definitely missed it and immediately felt back at home. Although I was with Becky and Frits, I was still able to get the physical and mental space I wasn’t able to get in the canoe and that was great. The walk through Whanganui started off nicely along the river. 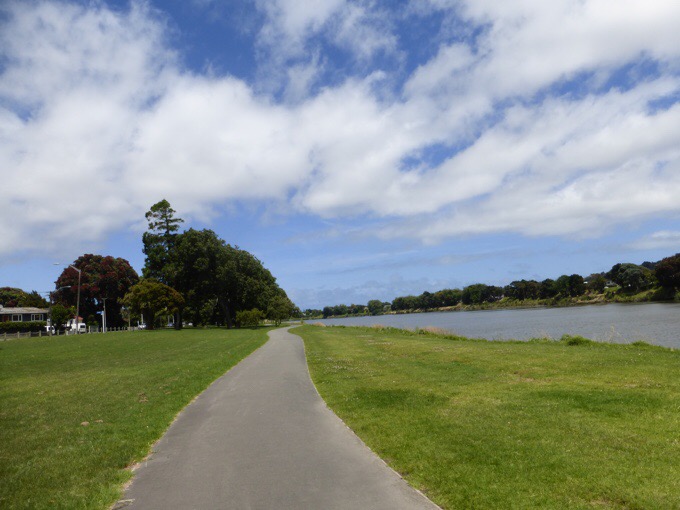 Frits will probably walk with us the next three days, and then he has a friend coming to visit for New Years in Auckland, and he will be off trail for eleven days. It was funny to see Becky and him walking together with what they had sticking out of their packs. Becky has a pirate sword she got at the Christmas gift exchange, and Frits, who is 2m/6’7″ tall, had his poles sticking out of his pack full length because one of them is broken and doesn’t collapse. 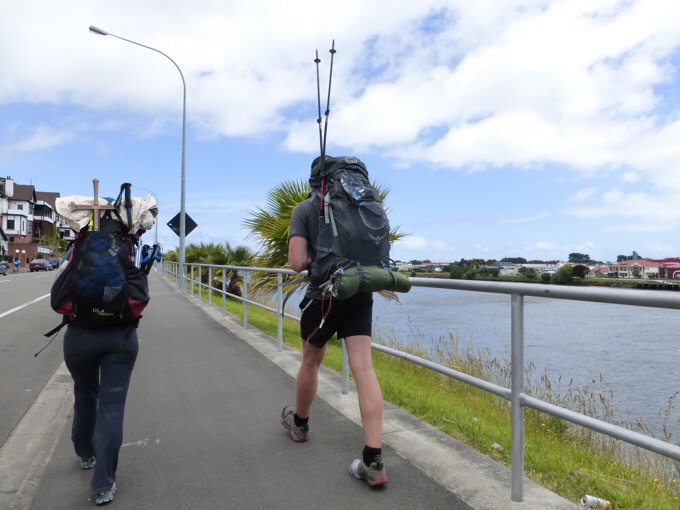 We passed a park and couldn’t resist letting the kids play at the park, ha! It was odd for it to be Christmas and be such a nice day outside. Many families were at the park having picnics. 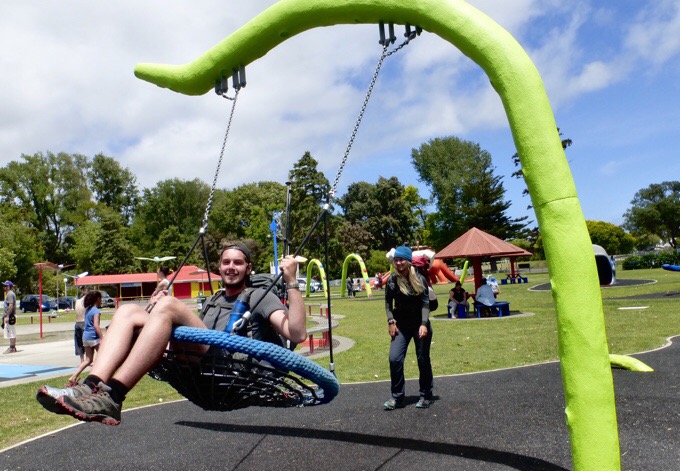 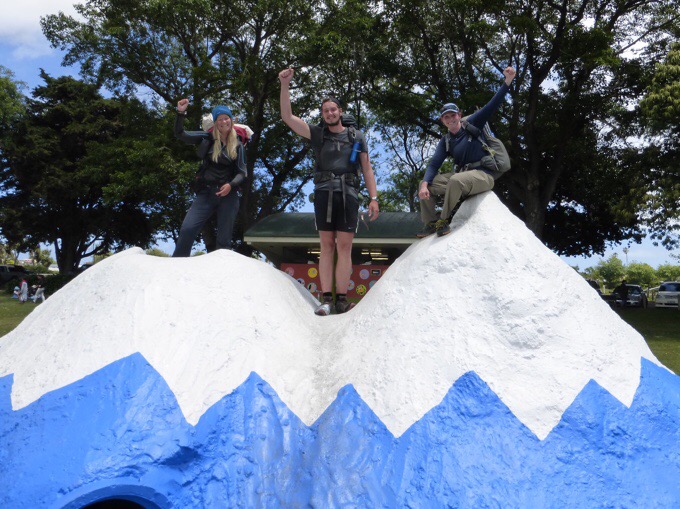 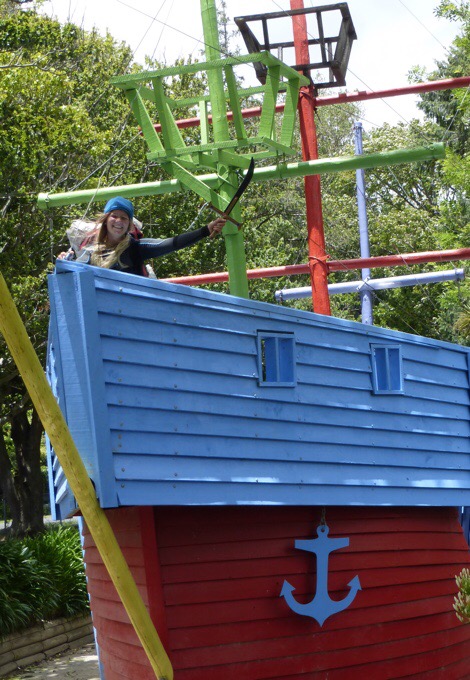 Putting the new pirate sword to use!

Then the 18km/11mi of highway walking started. At first, it started off ok with a good shoulder to walk along. We were trying not to go to the headphones too early, and attempted to try some of the book of questions. The traffic was so loud that we couldn’t hear each other speak, so we couldn’t do the questions. Then we caved and the headphones went in. 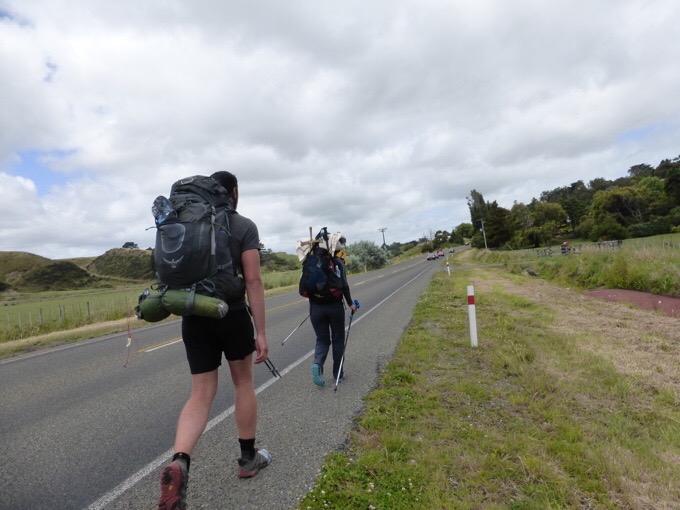 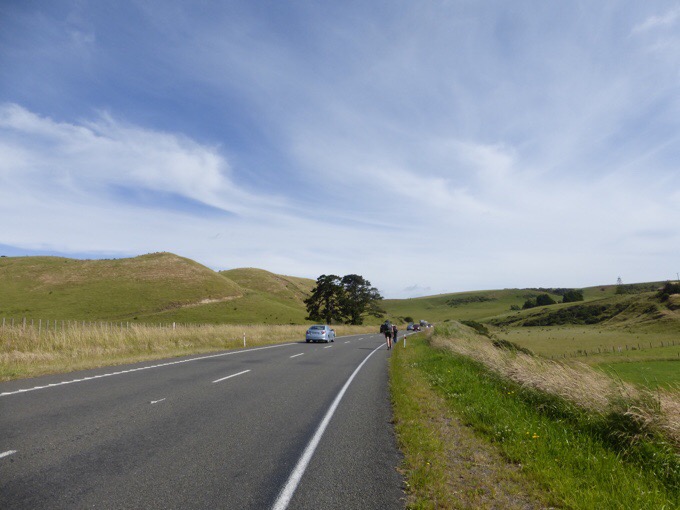 Becky and Frits can cruise with longer strides, and it was great to do the highway walk at a faster pace. My strategy is to walk for five to ten minutes as they pull ahead, and then jog to catch up. It gives me something to do, and gets the walk done quickly without feeling like I’m pushing too hard. 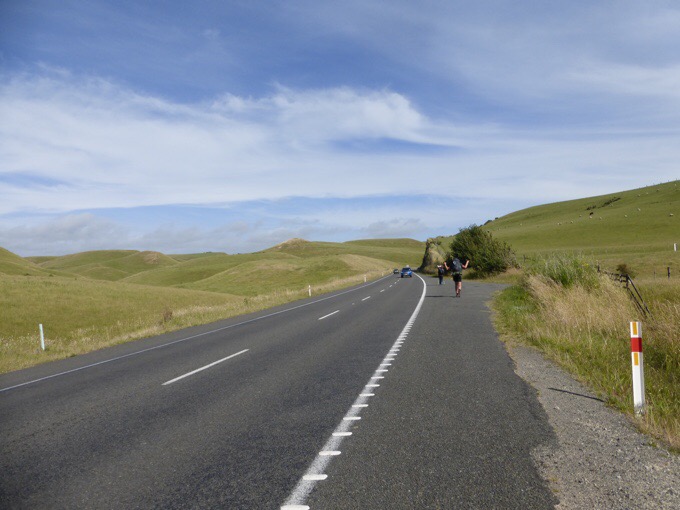 It was a really nice day out, but the scenery wasn’t as nice as other road walks. Today was the first time the grass wasn’t really green. It had more dried up brownish grass. We passed many farms with sheep and cattle, but that was about it. Many cars were kindly waving and honking, and some were not as kind and waving or honking in annoyance. There was a good hour or more stretch that didn’t even have a good shoulder to walk on. We were able to get in the grass when we felt like it, and walked toward traffic, so it wasn’t a problem. It just wasn’t enjoyable to have so much noise and stimuli after those lazy days on the river in silence and everything moving at 5km/hr pace. 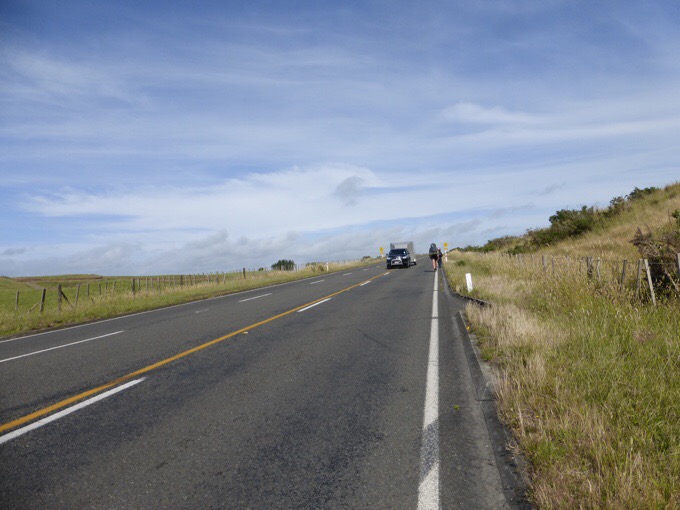 We accept that highway walking is part of walking a full country as small as New Zealand, and we are used to it. We get to make good progress, and it isn’t a draining as muddy forest walking, so it doesn’t phase us. It’s fun to be around such a big group of walkers. Though some did hitch ahead three days, the majority of our group are thru-hikers and also walking this highway stretch. It’s pretty ridiculous when people use the safety of the highway as an excuse. Yeah, it’s not ideal, but neither is walking those slogs in terribly muddy forests. I’ve never heard of anyone getting hurt on a road walk, but plenty get hurt in those death trap jungles. It’s just part of the walk at this point, and thru-hikers have accepted it as just another type of terrain that we can move quite fast on. 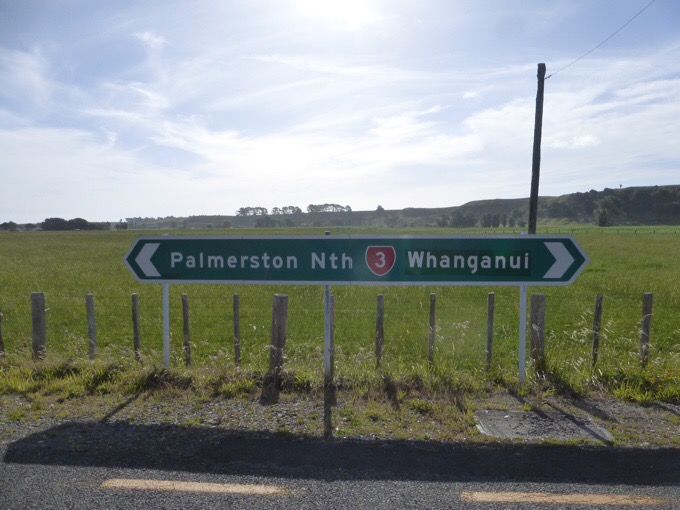 The last couple hours of the day, we turned off on a more rural road that was relaxing. We could walk three abreast with little traffic and Becky played Christmas music out loud on her phone. 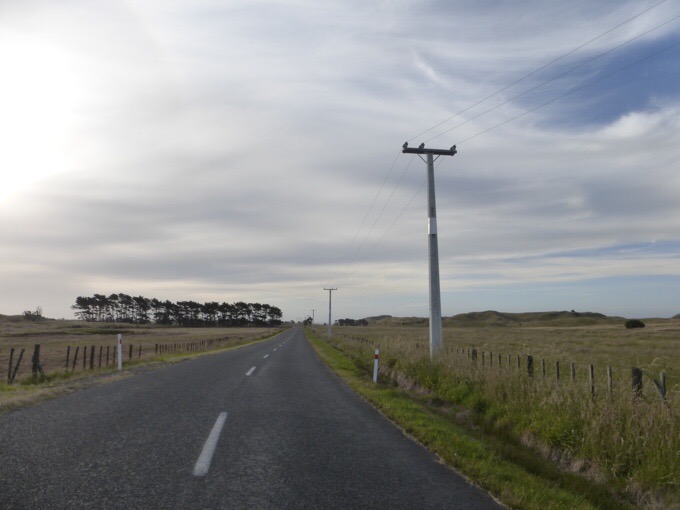 Frits mentioned that he realized that none of us brought anything special for Christmas dinner. Then, immediately after that, as we were walking by a home, two men met us at their fence. They seemed to be running out to purposely intersect us. They had Christmas trail magic! They gave each of us nice ham sandwiches with a special sauce and a beer (Frits got mine). It was so nice of them! They said they had seen the groups ahead of us as well, and one of the couples were even invited into a neighbor’s home for Christmas dinner. What a great and welcoming neighborhood! It was really kind of them and really lifted our spirits and sore feet for the final stretch on the road. 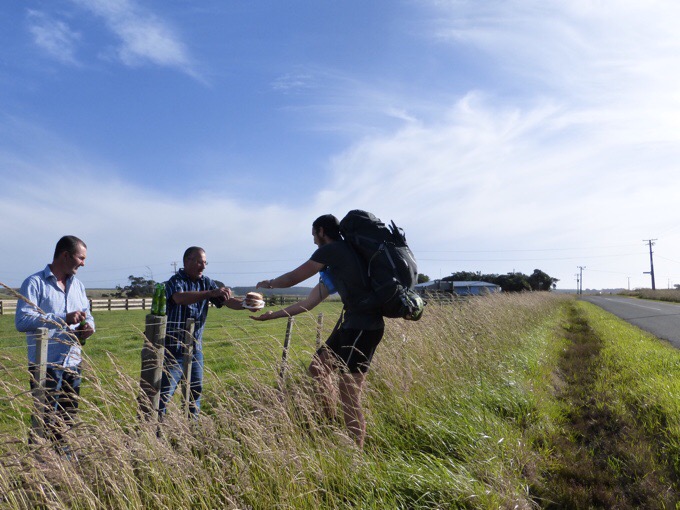 We got to the campground, which is right off the ocean, at 7:45pm. Three hikers from our canoe group (Ned, Jacob, and Brittany) were already there and a hiker named Suvi (who I first met the first town of the hike) was there as well. Jacob and Brittany had also gotten some holiday trail magic, and Ned and Suvi had been invited to Christmas dinner in someone’s home along that rural road. So great! Not long after us, Bill and Emily arrived, who we leapfrogged with about a month ago. Bill, Emily, and Suvi did the longer canoe from Taumarunui, so it has reshuffled things. With the holidays and New Years coming as well, I imagine things getting shuffled even more and seeing new and old hikers. 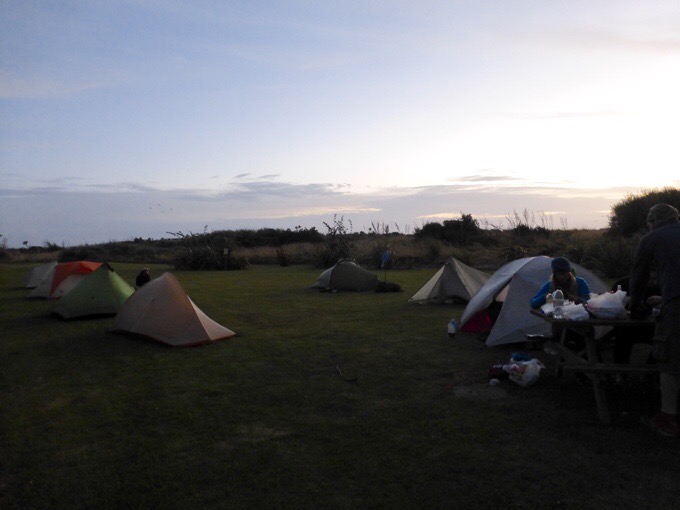 It was great to be at this small campground for Christmas. It is free for TA walkers and there were a few families camped in the paid sites. There is a playground and a small viewing deck to see over to the ocean and the beach we will be walking a bit tomorrow morning. We are back on the west coast for the the first time since Ninety Mile Beach the first week of the hike. We have now fully crisscrossed the country from west to east, and now back west again. For a visual, you can look at the map on my “Where’s Wired” tab. You’ll see we are almost to Wellington and the end of the North Island! 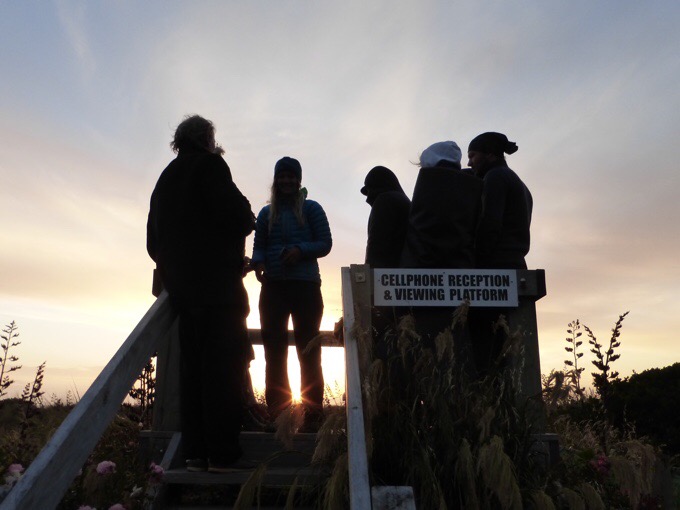 The viewing deck that is also the labeled deck for phone reception, haha! 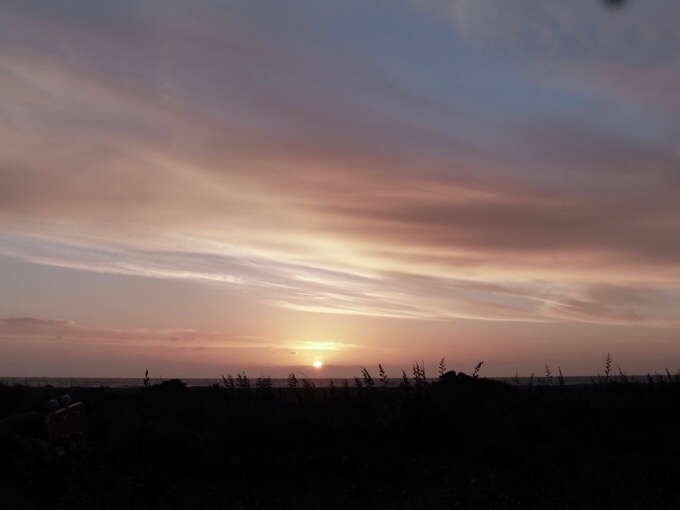 We got a great sunset over the ocean and I ate my gingerbread man that I got at the gift exchange last night. 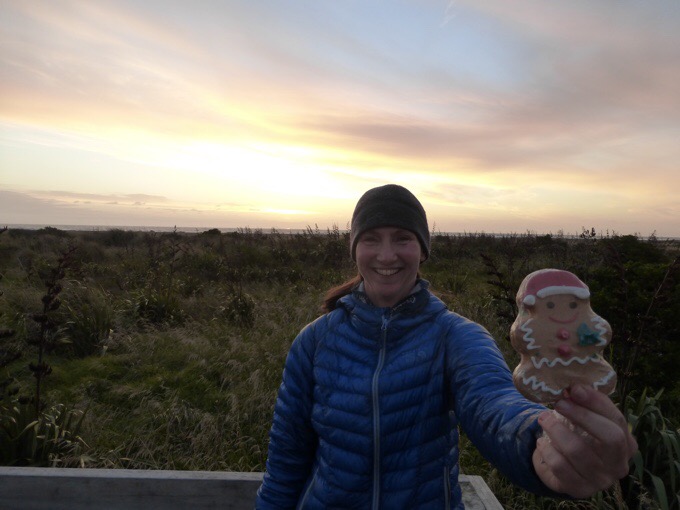 Yes, we could have hitched here and avoided that highway walk, but I think that all of us would agree that there is nothing like seeing a sunset after knowing you’ve walked yourself 873mi/1405km to get to that sunset. It makes you appreciate it that much more, and it feels like a reward that makes it all worth it. Yeah, I can always drive to a summit or sunset somewhere, but knowing it was 51 days in the making makes it that much more glorious. I’m dozing off as I hear ocean waves. Not a bad way to spend Christmas at all.