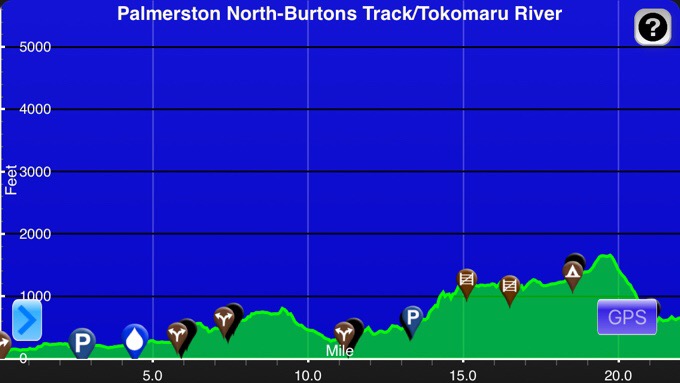 Note: If anyone would like to see the hilarious video I mentioned on Day 46 about my missing umbrella and what my hiker friends did with it when they found it, it’s now on my Facebook feed. This link should take you there or you can go to my Facebook page linked at the top of the blog. It’s great for a laugh!

I was awake early this morning, but was in no hurry to hike anywhere. I watched an episode of the newest season of Mozart In The Jungle and am happy to have a new season of that show to delve into. I was super comfy with my sleeping pad and sleeping bag and felt like I could have laid there all day. I realized it’s now been about six months that I’ve been hiking almost nonstop on back to back trails, and wonder if I’m beginning to feel the cumulative effects of that both physically and mentally. Everyone around us seems to also be experiencing that lull in energy that seems to come around the halfway mark on long trails as well. By the way, we did hit the halfway point today! Maybe it’s the transition from canoeing to so much road walking, but there is definitely a lull. Yesterday was a good mental recharge for sure, and today provided a different kind of fulfillment with the first full day of hiking since we did the Tongariro Crossing eleven days ago.

We left Brian and Claire’s at 7:20am and hiked out of Palmerston North. It had rained a bit overnight and was overcast with a slight chill in the air for much of the day. This should be the heart of summer for NZ, but it still feels like fall many days. It seems to be a cooler and rainier year, and it definitely doesn’t feel like summer. It misted on and off the first half of the day. The walking today was pretty enjoyable, and was a welcomed change from paved road walking. It started off with nicely maintained nature paths. 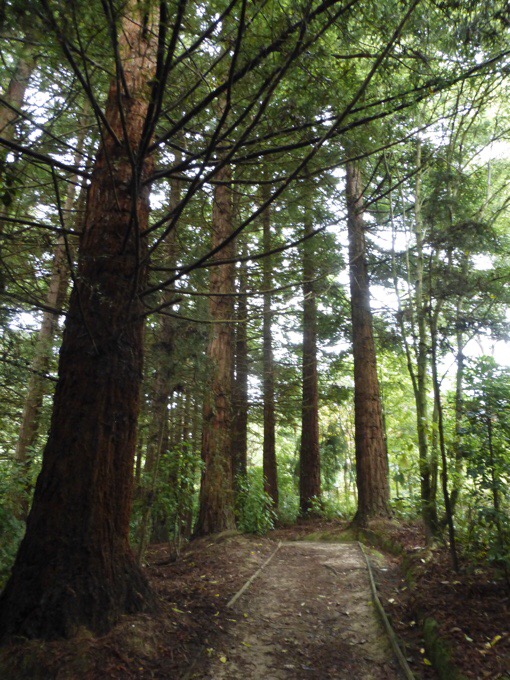 Early on, we ran into the two American couples of Bill and Emily, and Brittany and Jacob. We ended up seeing Brittany and Jacob on and off throughout the day. There was a bit of rural paved road walking that soon became gravel and more path-like for quite awhile that made for some easy cruising on gradual uphill. 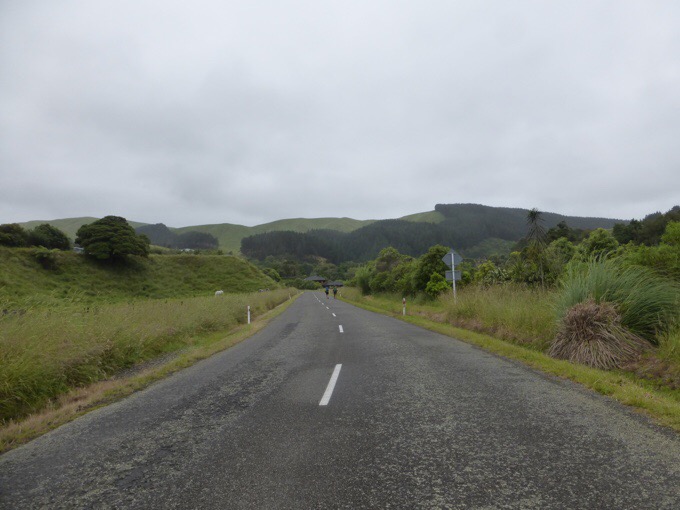 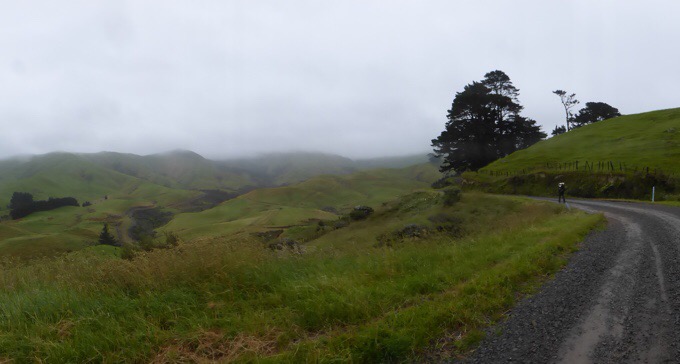 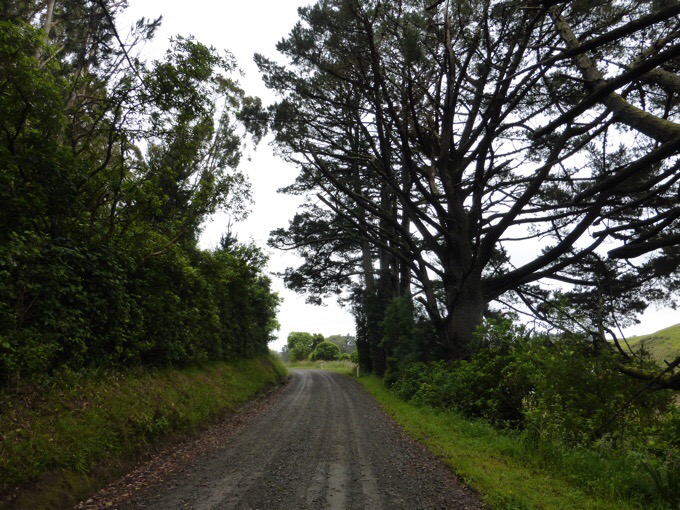 The four of us had lunch at a car park for a well used hub of biking and walking tracks. It was cool to see so many families and people out for the holidays using the tracks. 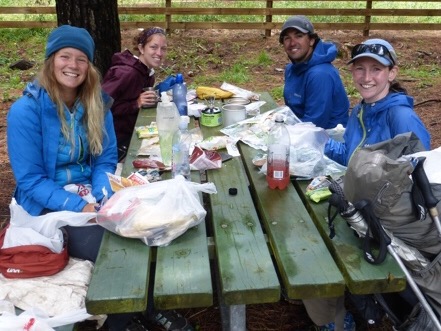 Lunch with Brittany and Jacob.

Just as we were walking out of lunch on one of the bike paths, we ran into Brian, our host from last night, mountain biking with his daughter and son-in-law. It was fun to run into them. Brian’s job is with maintaining all the trails we’d been walking and they were all great today! 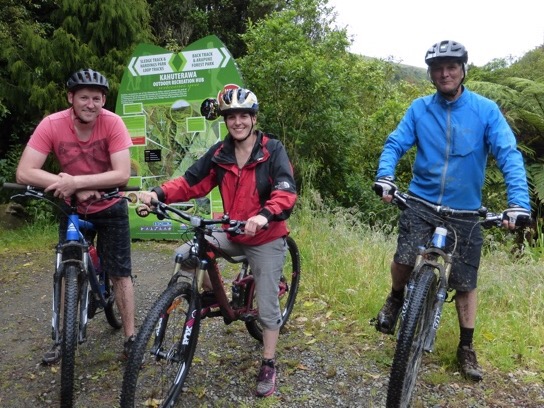 Our homestay host Brian with his daughter and son-in-law. 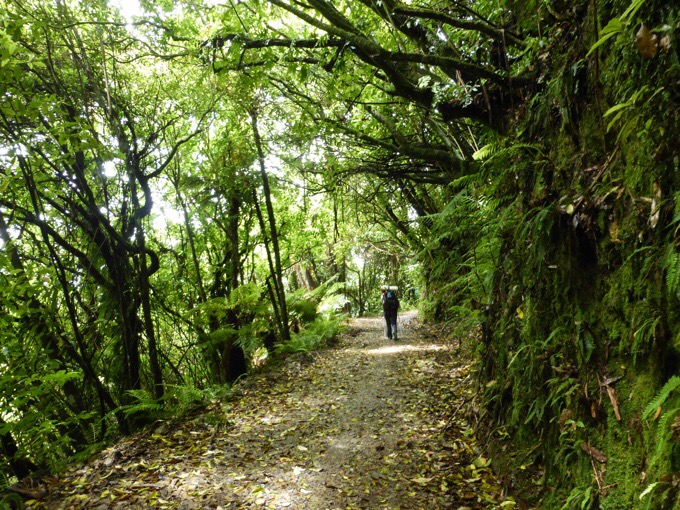 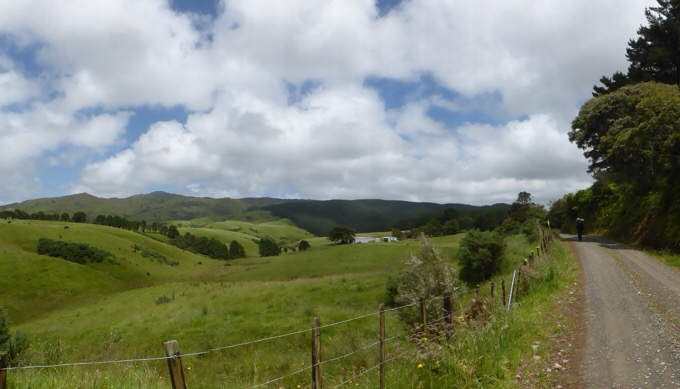 It’s been far too long since we just had a full day of walking that felt like trail. My “tank” of good hiking had been pretty depleted, and today’s hiking was just what I needed to fill it up. I get energized and feed off of good trail and scenery. Today was tiring, but quite energizing if that makes any sense. There is just something very fulfilling about hiking a full day and being a good tired that makes you really sleep well. 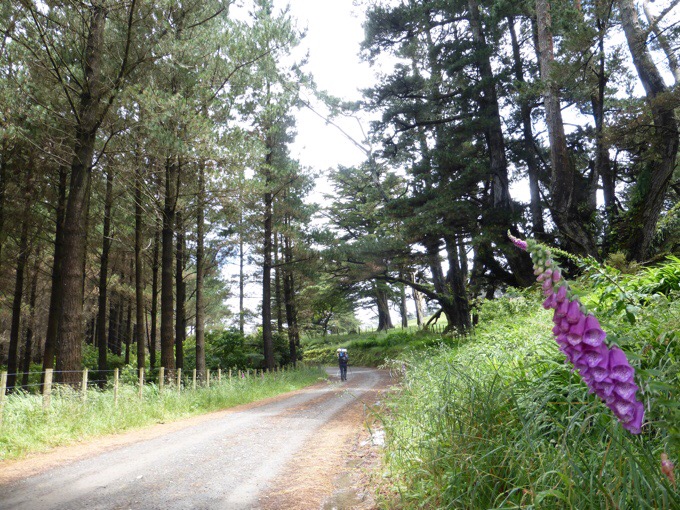 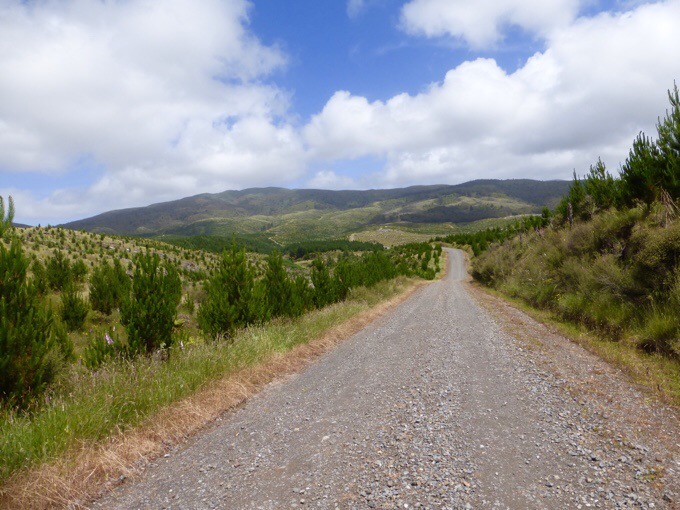 We did this same amount of mileage the last few days on roads, and my feet and joints were done at the end of each day, but I wasn’t tired. Today, the impact on my joints was minimal, so I enjoyed the fluidity of today so much more, and when we finished, I was ready to crash from that good tired of a full day of actually hiking. It was on roads, but they were more like wide gravel and dirt trail. 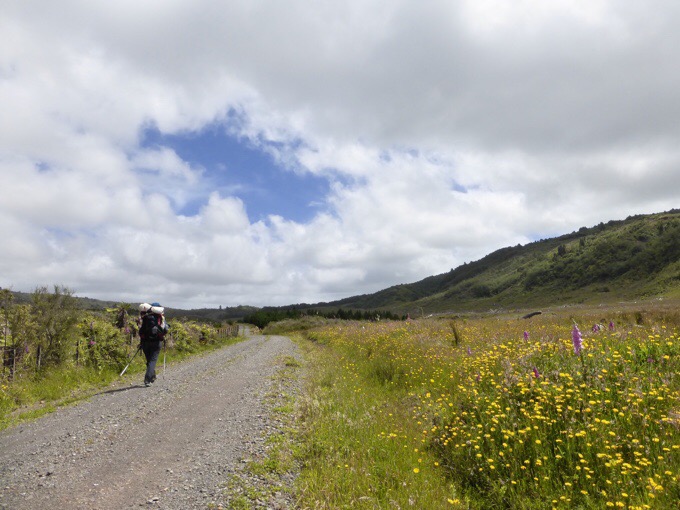 We made it to our goal camping point around 4pm, and Jacob and Brittany arrived. Our pairings are quite similar that both Jacob and I have thru-hiked before, and are more of the mentality of going a bit further than our partners generally like to go. It’s an interesting balance of compromise because it was too early to stop and camp, but that next hour or two further could change an enjoyable day into a draining day on the Te Araroa with how random the trail is. Well, we decided to roll the dice and go for it, and entered Burtons Track. It ended up being slow going muddy terrain with short ups and downs, and that can be draining physically and mentally at the end of the day. 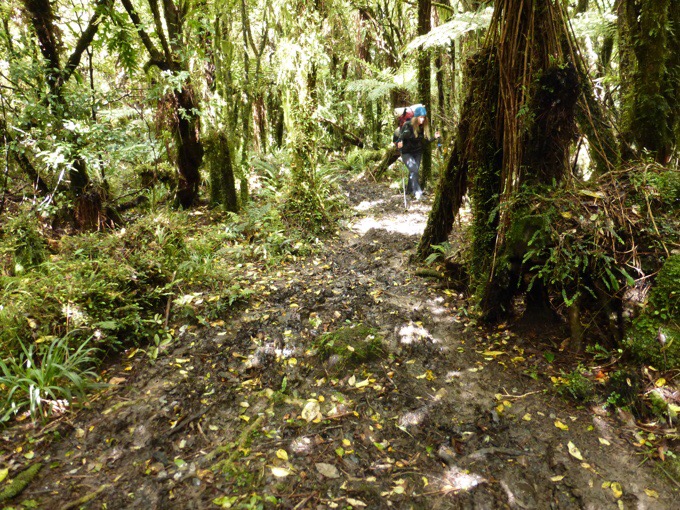 We pulled ahead of Jacob and Brittany, and there were also many stream crossings. Yesterday and today, Becky started having random foot issues that haven’t happened before. For some reason, some of her toes and the backs of her heels were getting either blisters or raw rubbing. We’ve all gotten that raw rubbing out of nowhere out here at times, and it seems to be random. At the end of the day, she switched to a softer pair of socks hoping that would help stop the really raw heel rubbing, and that did the trick thankfully. Unfortunately, when we hit all the water crossings at the end of today, it became quite unenjoyable to walk on. We were so close to done when we hit a dead end of brush along the river that didn’t make sense. After quite a bit of time backtracking and looking around the hillside, Becky noticed a blaze on the other side of the river. There had been no signage on our side, but apparently there was some kind of washout in the trail where it just suddenly crosses the river. Later, I found notes that comment on actually walking in the river upstream for a bit, and other notes warning about how swollen these streams get after rain. It was quite swollen, and just added to the slow pacing at the very end of the day. We left a note for Brittany and Jacob so they wouldn’t have to search as we could tell countless others before us had done, and moved on. 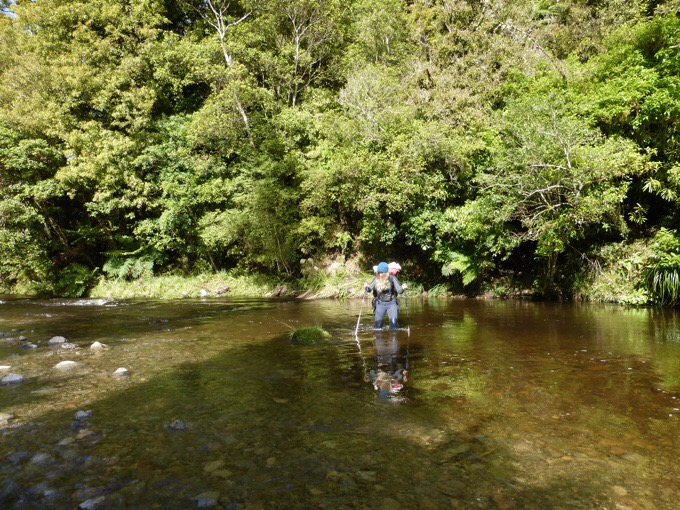 We walked along the river in the final stretch, and it wasn’t the relaxed mosey we’d envisioned. Instead, it was short steep ups and downs on eroded sidehill that don’t show up on the elevation chart. We finally made it to camp at 6pm, almost two hours for the last 5km, dang! 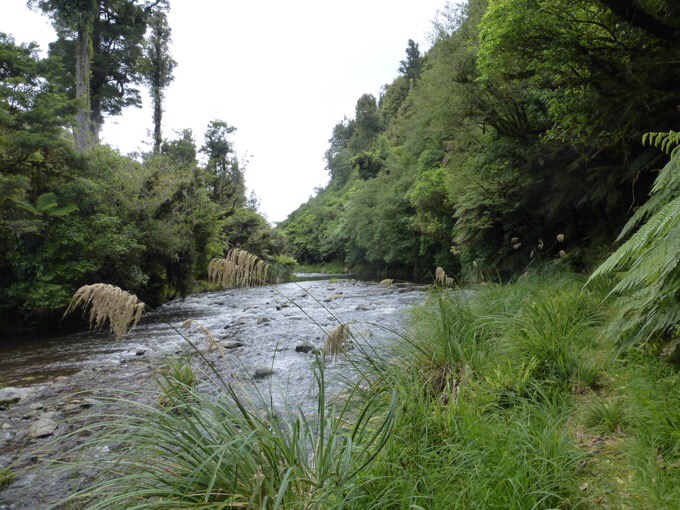 Brittany and Jacob arrived not long after us, and we all just independently set up our tents and ate dinner after a tiring ending to the day. It was something that Jacob and I enjoy and feed off of, but was a bit too much for Becky and Brittany, and I always feel bad when that happens, but on this trail, it’s so dang hard to gauge pacing. 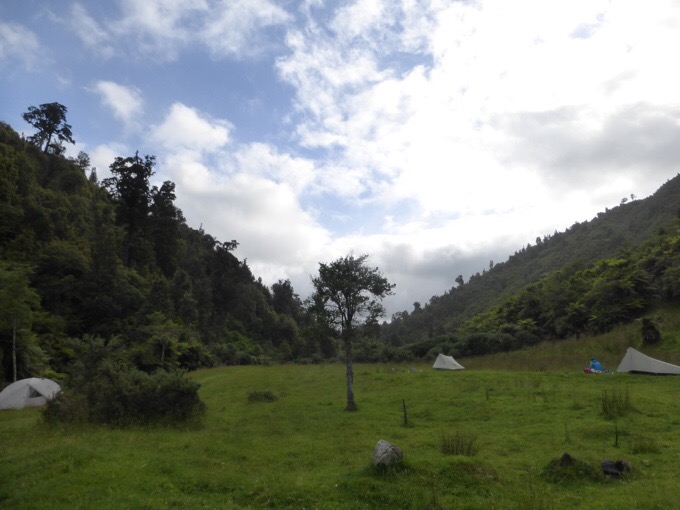 With the cold air and white noise of the stream, we all retired early and I slept for an hour and a half from 7:30pm-9pm before waking and doing some blogging. I was spent and ended up falling asleep again and waking in bits throughout the night to write for some time before dozing off again. I needed a day like today. Although tiring physically, it filled that depleted tank I had mentally. Whew!