Day 57: A Clear Beginning To The Tararua Range 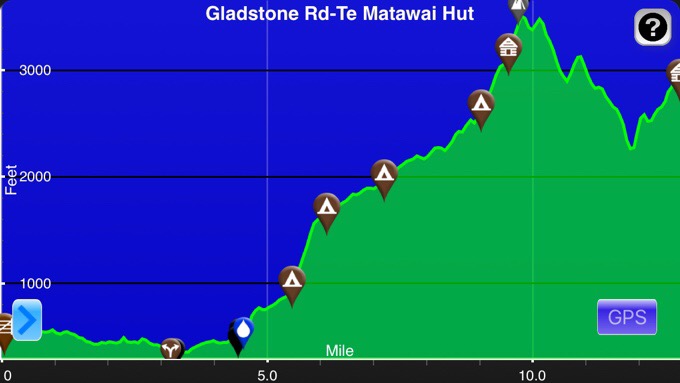 It was a great night of sleep at Sarn and Claire’s. Sarn gave us a ride back to the trail, and we got started at 7:40am. We had just over an hour of road walking before we hit the entry to the Tararua Range. It was a beautiful day to enter the Tararua Range, which is known for its inclement weather, and we could see the range from the road. 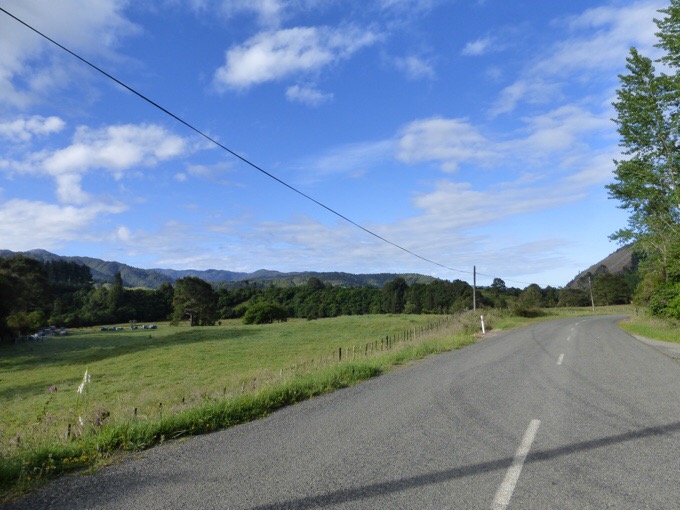 The pacing of the Tararuas is quite slow with difficult terrain, and I’ve been thankful to my friends who have blogged about it and mentioned timing, so I’m going to do the same. We started from the trailhead at 9:15am, and headed up to Waiopehu Hut as a goal lunch spot 5.6mi/9km. Before entering the forest, we had the usual TA fun of walking through fully saturated farmland with cows. I should be used to this by now, but I couldn’t help but be hyper aware that I was basically walking in the cows’ toilet of water with cow urine and poop. 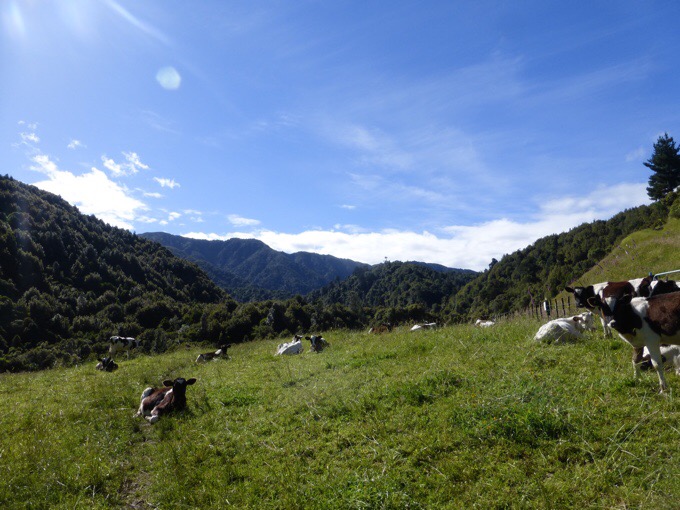 The terrain up to Waiopehu Hut was was similar to yesterday with quite a lot of mud, puddles, roots, and many ups and downs. The mud was a bit more solidified, but it was still slow going. Thankfully, we didn’t feel like the trail was too steep, and there were nice periods where it would level out for a minute to get a break. 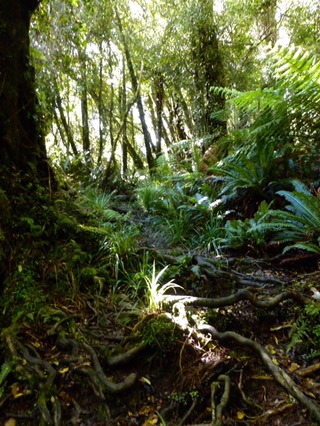 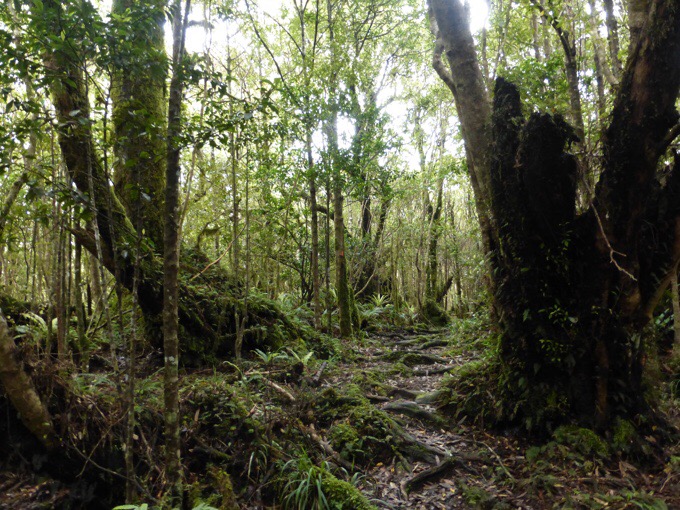 The signage on the track had the mileage 2km more than our gps track had. They usually aren’t that far off, and it had us wondering which one was right. It did end up taking us 4hrs (with a 15min break) to make it the 5.6mi/9km to the hut. 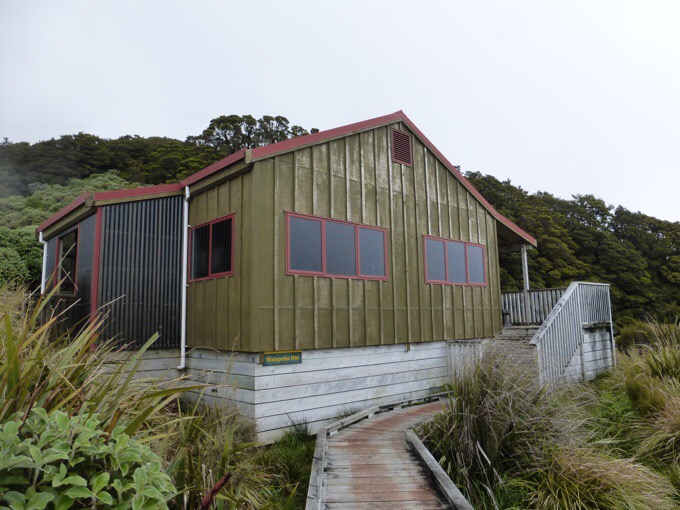 When we got there, some lower lying clouds were hovering on the range, but we were thankful to have views looking down to the town of Levin and out over the ocean. We are pretty close to the coast, and even have some beach walking coming up next leg on the way into Wellington. 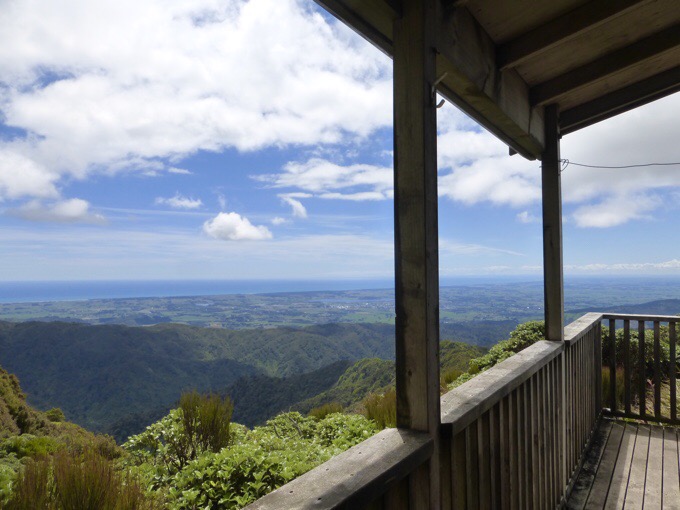 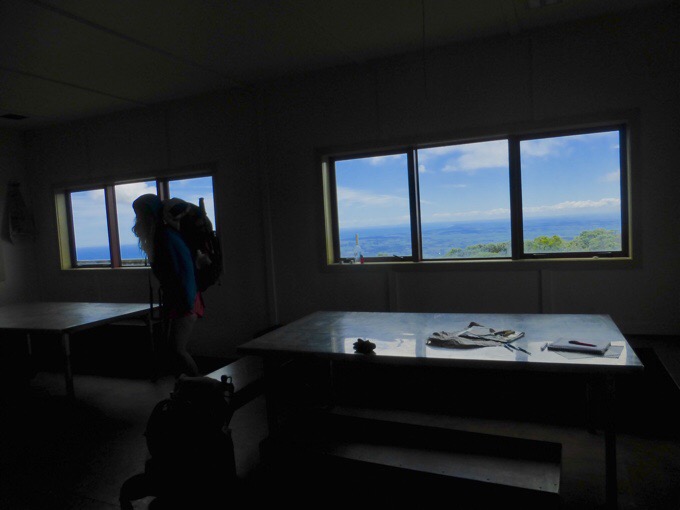 It was chilly up there, and we both ate with our down jackets on and were happy to have the hut to relax in. We took our time and left at 2:20pm to head 3.2mi/5.2km over Waiopehu and Twin Peak summits to Te Matawai Hut. There were some nice views up there, and I’m glad we got a good opportunity to see the Tararuas in rare good weather. 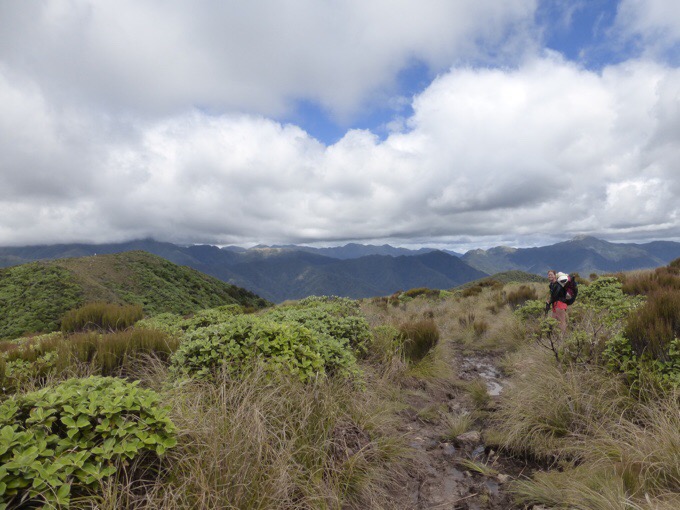 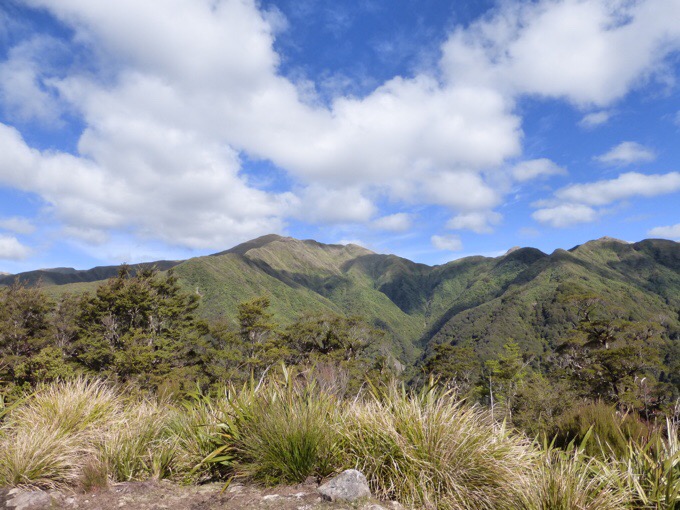 The terrain was above tree line with plenty of foot sucking slippery mud and tussock. It was nice to get views and be up there with nice weather and no wind. A front is moving in tomorrow that will bring colder temperatures and high winds, so we wanted to take this day in and appreciate it while we could. 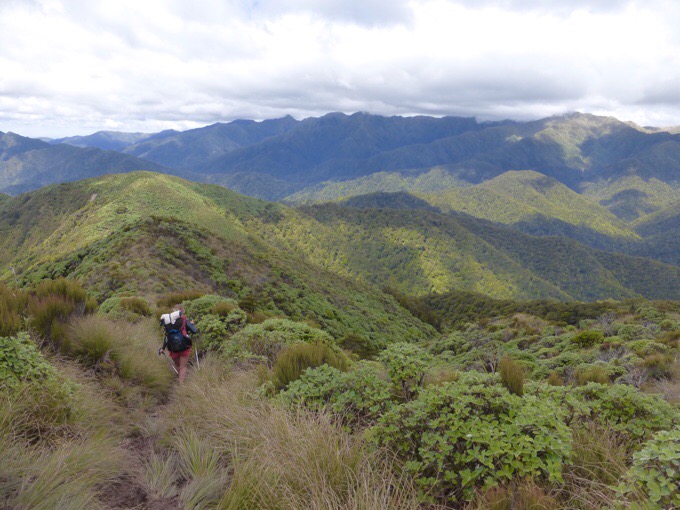 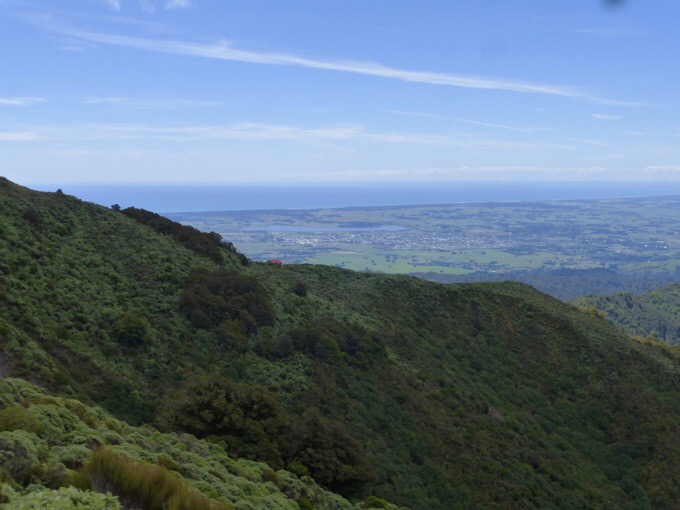 Looking back on Waiopehu Hut. 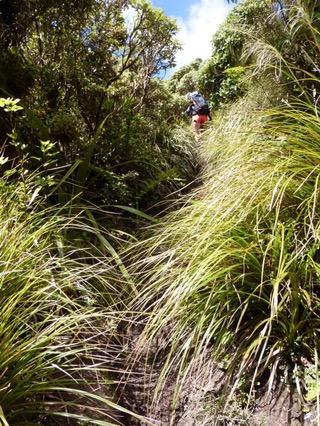 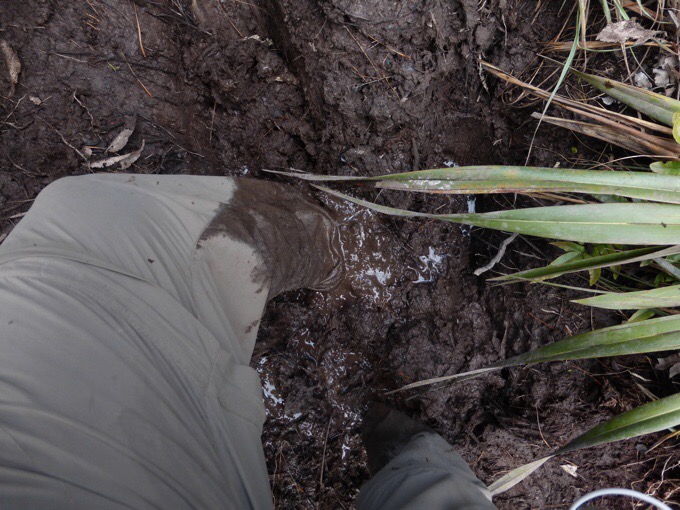 After the peaks, the trail dropped back down to the woods, where we intersected with TA walkers Bill, Emily, and Flo. They too were aware of the incoming weather front, so they were planning to push on past Te Matawai Hut to hopefully line up getting over Mt Crawford before the severe winds hit later tomorrow night and the next day. I had been pitching various versions of the same plan to Becky the last two days, but she wasn’t biting. Thankfully, once she heard others suggesting the same thing, she knew it wasn’t just me trying to push unnecessarily, and she realized it really was worth getting over Mt Crawford if we could before the inclement weather came. 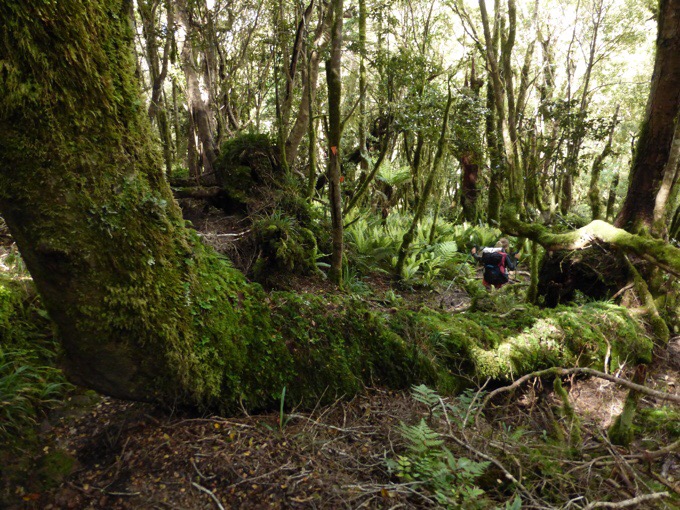 We got to Te Matawai Hut around 5:20pm, so it took us 3hrs to go those 3.2mi/5.2km from Waiopehu Hut. Yes, slow going terrain, but we were glad that it wasn’t as draining as we’d anticipated. The others moved on, and we all hope to be at the same hut tomorrow night for New Years Eve. We had the 18 person shelter to share with just one very nice local couple out for a couple nights, Chris and Claire. 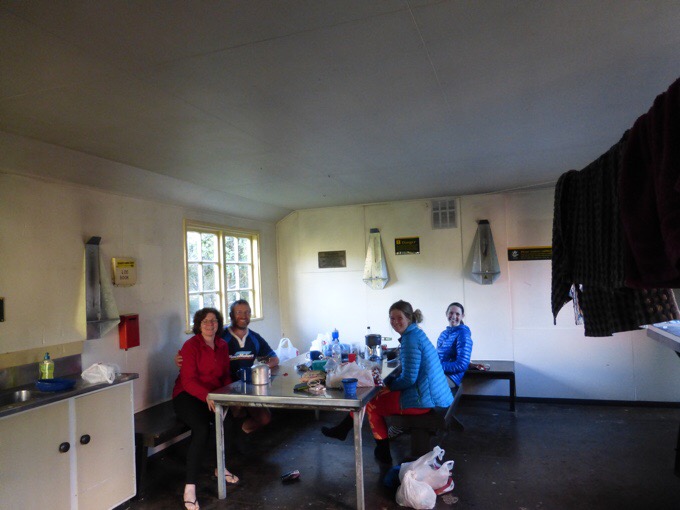 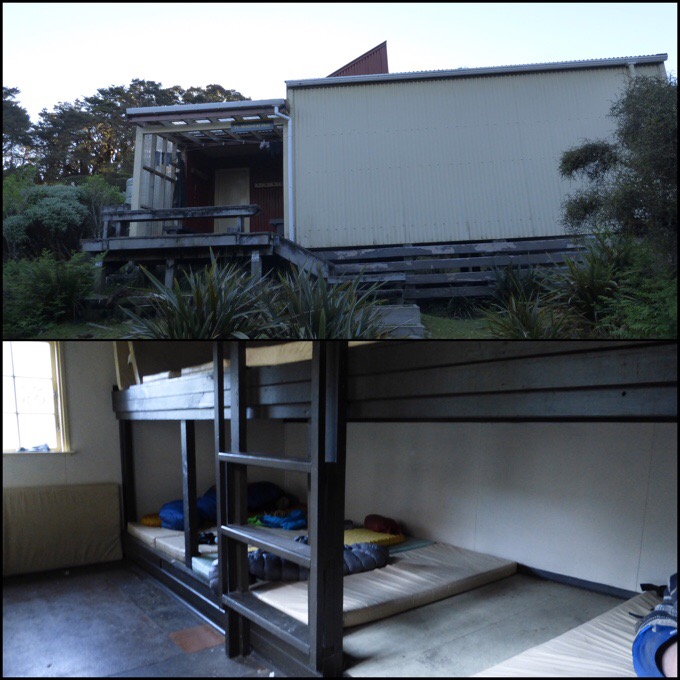 We decided on a 5:30am leave time tomorrow morning to have plenty of time to push on over Mt Crawford if we decide to go for it and pass Nicholas Hut tomorrow night. We both were surprisingly not very tired today, and I think it’s because we finally got sunlight after what seems like an eternity (we last had good sun four days ago). We laid down early around 8:15pm, and Chris and Claire weren’t too far after. Then around 8:30pm, a walker arrived, and then two more TA walkers (Sally and Antoine) showed up even later. It will now be interesting to see how I sleep. I have my headphones and white noise app ready to go and we already have one snoring away. It is quite chilly outside, so it is quite nice to be inside. I just hope I get some sleep! Big day tomorrow! 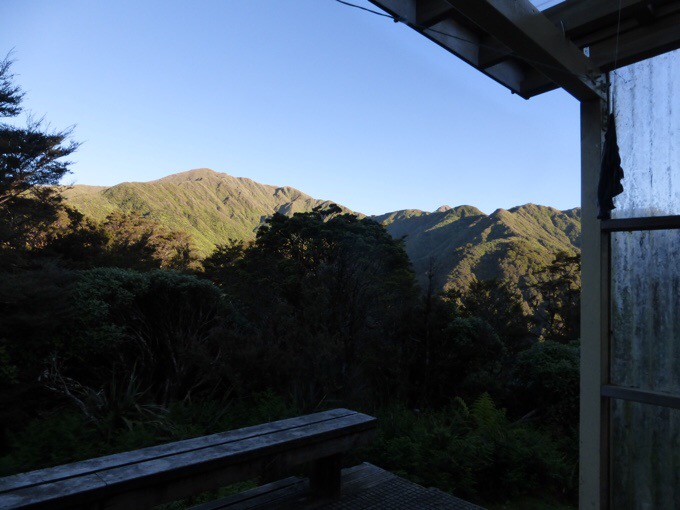