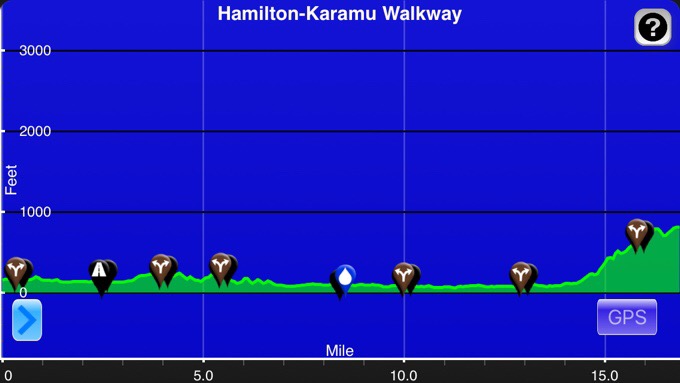 Our plan was a relaxed leave time from town. We still had some errands to run and wanted to line up camping in a certain spot two nights from today. We made breakfast at the hostel and checked out at 10am. We had all of Becky’s old gear and wanted to go to the post office to send it to a family Becky knows here. We also were excited to weigh it to find out the grand total of the the weight lost in the makeover. The people at the post offices here have been super nice compared to US postal workers and were very nice to weigh the packs for us. We did the base pack weights (the pack with gear without food and water) and found that Becky had cut 4.4kg/9.7lbs! She had been carrying basically 190% of the weight I had! Her old base pack weight (without food and water) was 12.75kg/28.1lbs and her new one is 8.35kg/18.4lbs. For comparison sake, mine weighed in at 6.58kg/14.5lbs (with poles). What a difference! 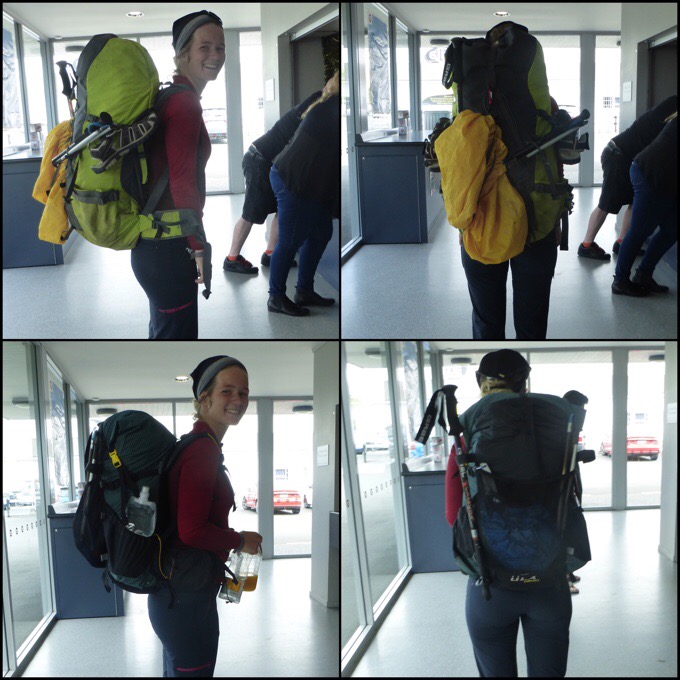 The before and after comparison of the the two kits without food.

As a total of what we changed, it was almost everything. We upgraded the pack and tent from old ones I no longer use, and then got her new clothes (pants, rain jacket, down jacket), a down sleeping bag, and new utensils. She also sent home many things (I had already had her drop at least 1lb of gear over the last few weeks). Today, she decided she didn’t need full on sandal shoes with Velcro straps(she got flip flops), a big metal pocket knife with metal kitchen utensils, a big lock for hostels, a pack cover (now using an internal trash bag), and a Kindle. It was really fun to just look over all day and see the change. We both were just so happy! To think the effort Becky has had to put in to lug all that and keep up the pace we’ve been doing the last three weeks! The pack compressed down really well and actually looks smaller than mine even though it weighs more. Since it is my old pack, and Becky is taller than me, she could probably use a size up with a longer torso, but this may be sufficient. This five day stretch will be a good test for how the pack feels and if it’s too small, but given what she was wearing before, she’s happy even if it isn’t a perfect fit. Makeover complete! 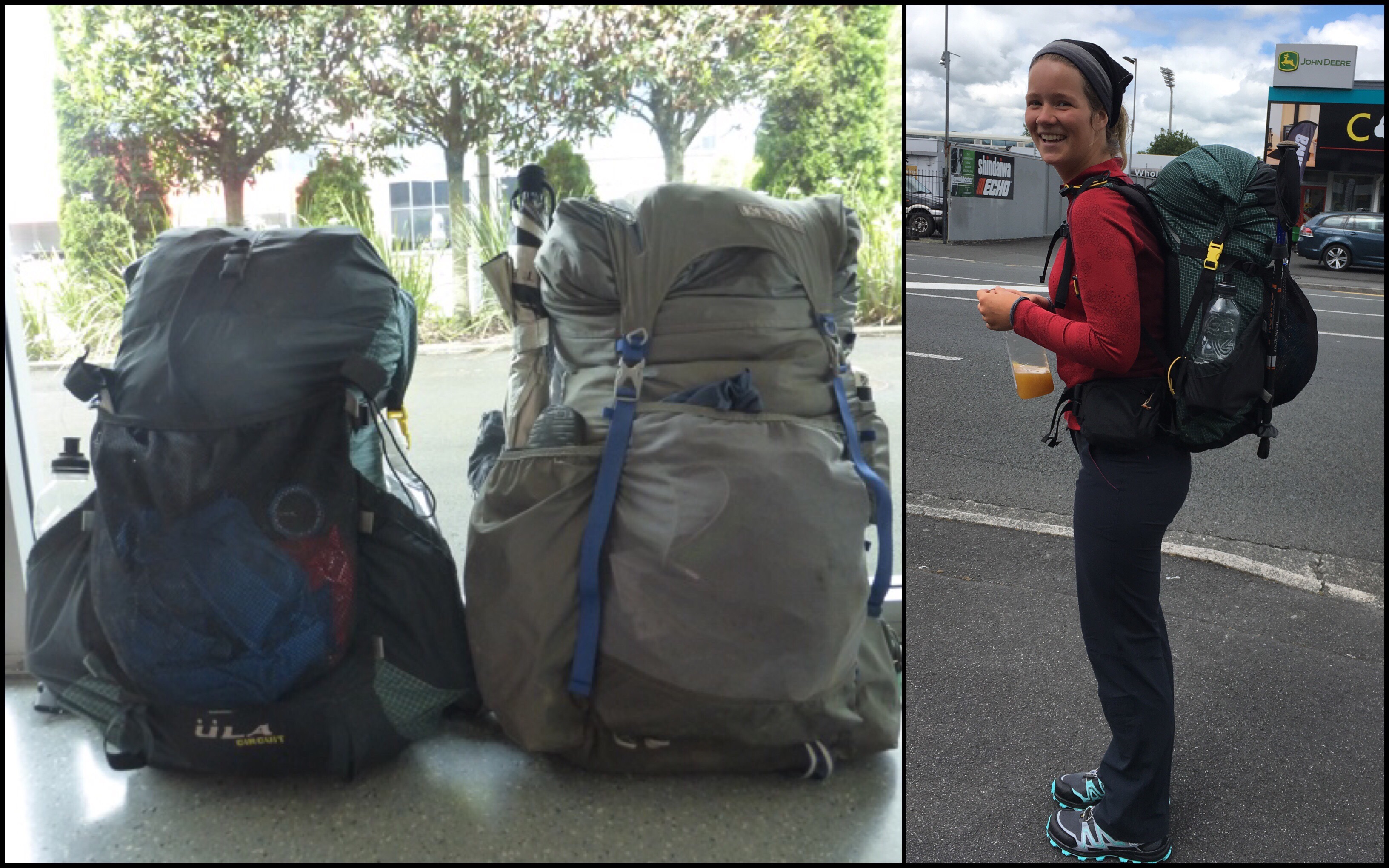 As we were walking out, we stopped by a store for Becky to get some flip flops and ran into brother and sister pair, Softwalker (who I’ve mentioned I know from the PCT & CDT) and Laurel. They were going to run some errands as well and then head out. They had just gotten mohawk-esque haircuts just for fun. 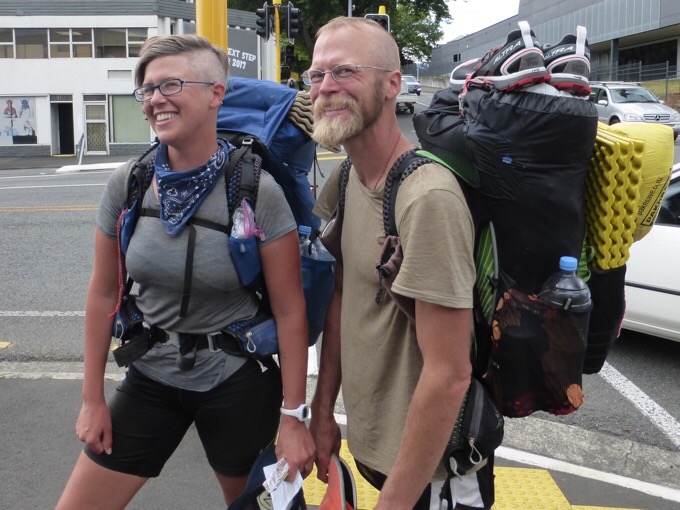 The walk out of Hamilton was a combo of nice residential walking, bumpy farmland, paved roads, and gravel roads. 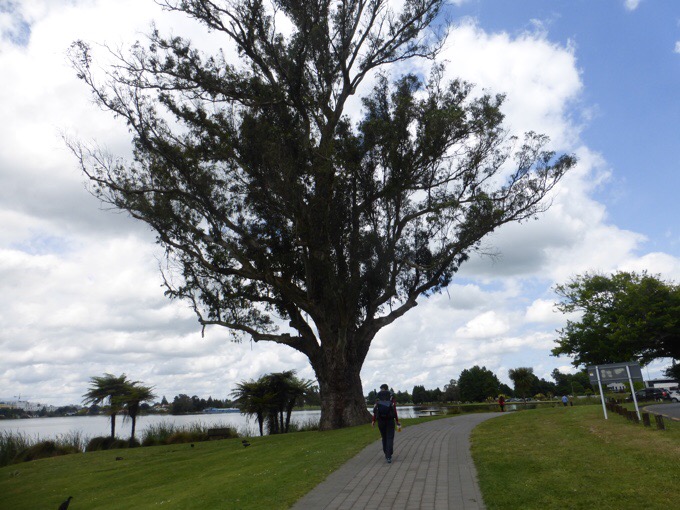 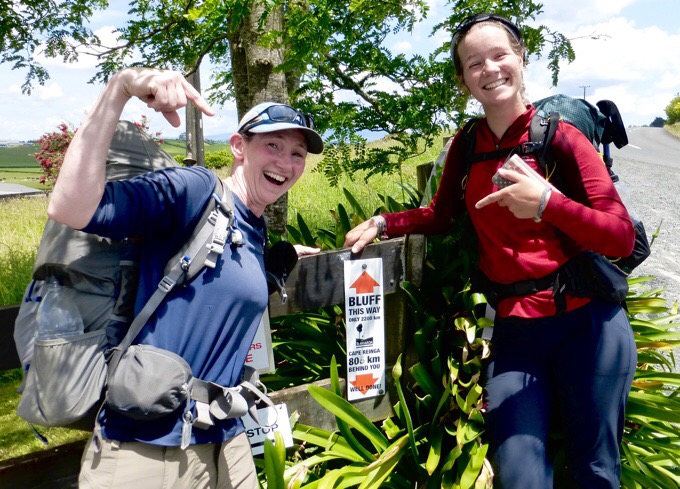 Sign at a trail angel’s house outside of Hamilton marking the 806km mark and 2200km left to go. 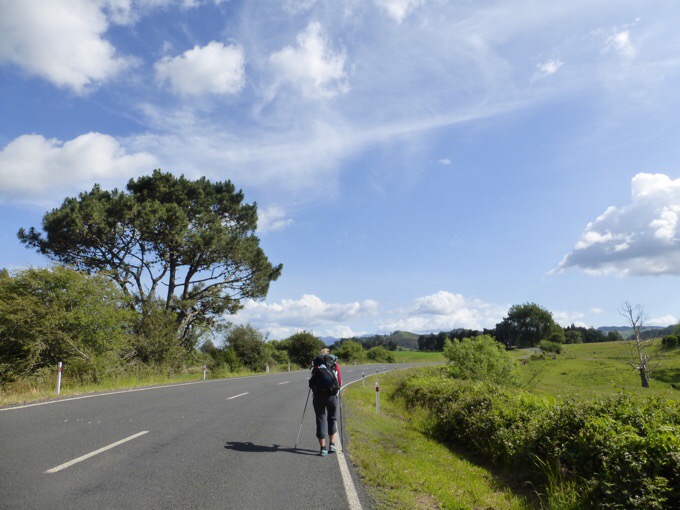 There was a great arboretum we passed through that we both really liked. 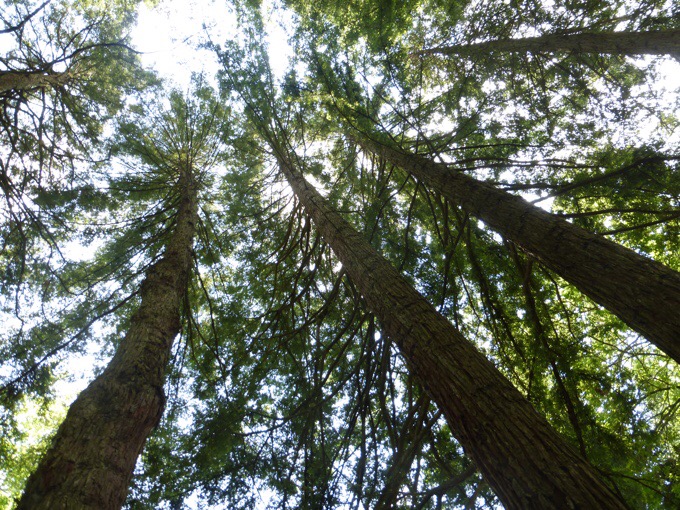 Hamilton is a town many hitch to that don’t want to do a lot of the road walking out of Auckland. Because of that, there was suddenly quite the crowd in Hamilton while we were there and we all left out with the same goal today. The Guthook app has spread quickly it seems, which is great, but also selfishly bad, ha! The app has marked possible camp spots you wouldn’t know about if you didn’t have it. That is one of my favorite features. Since it is new, it sometimes has less detail than it does on other trials. So, it says there is possible camping, but it’s a surprise as to the quality of the spot and how many tents will fit. Well, everyone seems to have headed for the same spot and thankfully, it was an open area. We had plenty of farmland walking and saw a farm of deer, which was a first. One curious one came over to the fence for Becky to pet him. The quote of the day is when he tried to follow along the fence and Becky kindly and seriously told him “I have to go, I need to get the ring to Mordor.” Spoken like a true LOTR fan, ha! 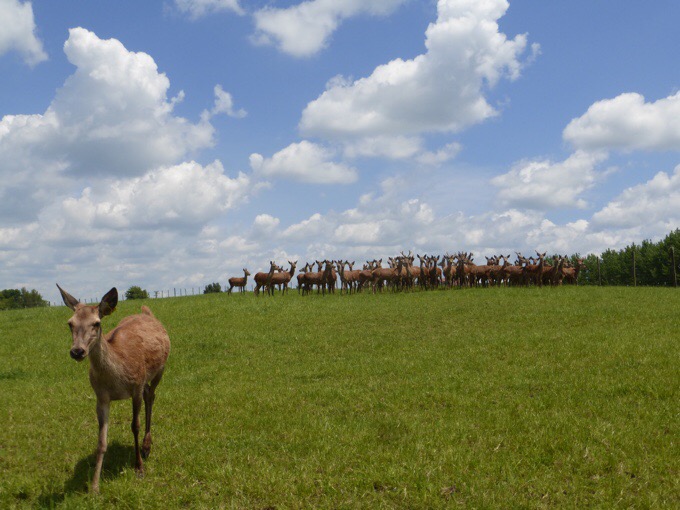 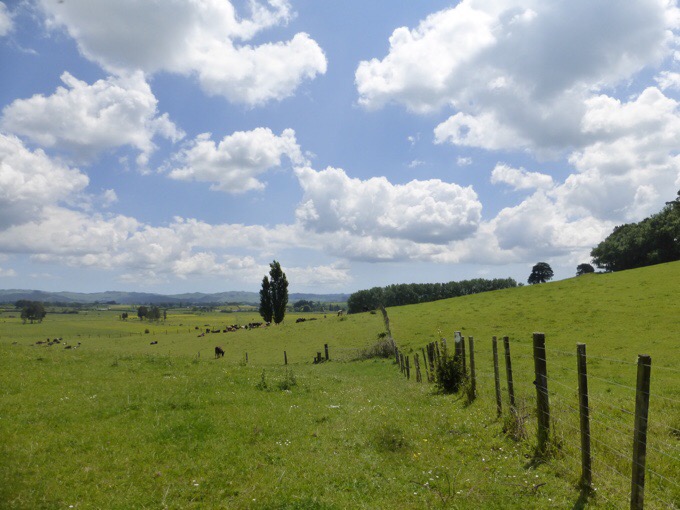 Before we got to camp, we were able to fill up our water at a hose from a local who was really nice and put out a sign for hikers to get water rather than pulling from a source downstream of a ton of sheep. 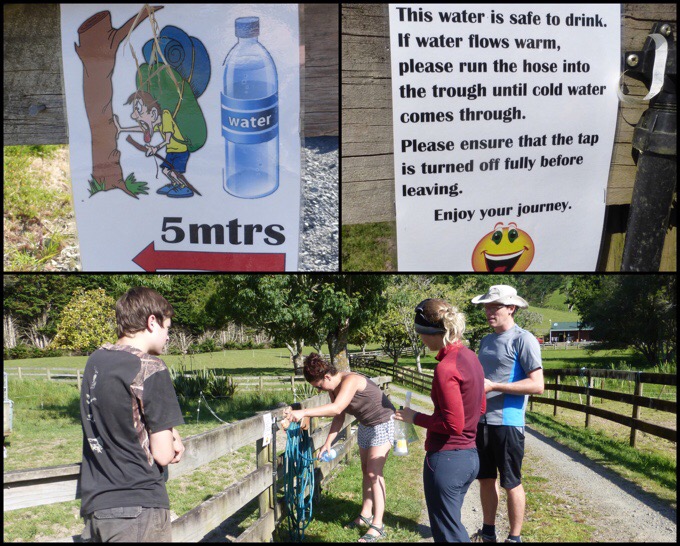 There was road walking that then changed over to a gravel road, and for the first time, we felt like we saw the scenery that NZ is known for. Rolling green hills with plenty of sheep. It was great! One hiker that we met out for a short section said that he picked this section because it was listed as one of the top six parts of the TA. We found most of today to be really peaceful and scenic and both were just really happy. It may have been still the buzz from the gear makeover, but we really enjoyed today. 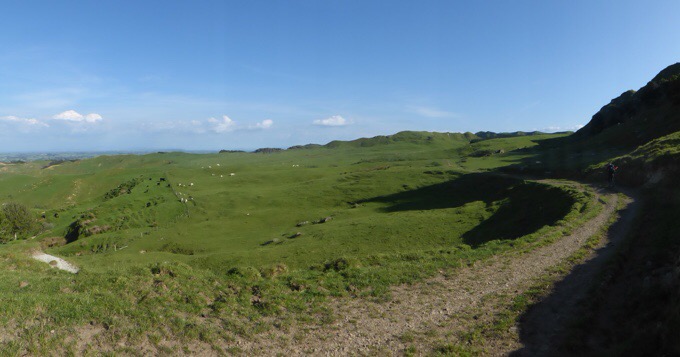 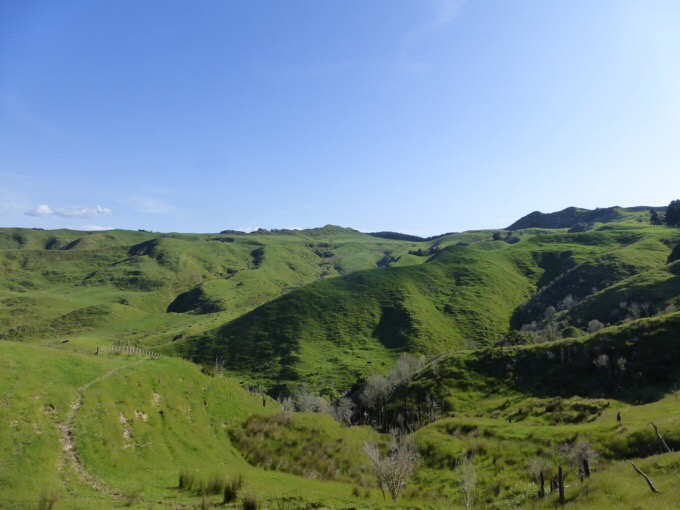 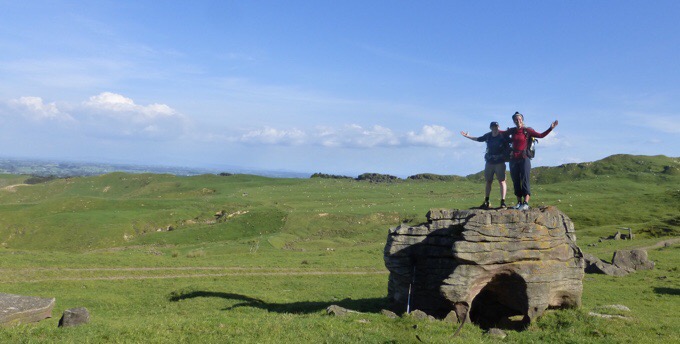 We ended up with 12 people at camp tonight. I’m really trying to embrace this aspect, but my hermit side is pushing back at times. Don’t get me wrong, I want to stress that everyone is super nice! Matt and Laurel are back a bit and Angelynn and Heartbreaker are ahead a bit. It’s funny because I’d met everyone (except one hiker out on a short trip) before. Most of them are the people I camped with my first night on trail. So funny to see they are all still overlapping! They all are hitching roads and even hitched some of today’s walk. It’s so prevalent out here and is a completely different take of cherry picking rather than thru-hiking. Honestly, it’s something Becky and I have trouble relating to and it is a bit tough to be around that mentality. I’d say 75% of people claiming to be “thru-hiking” the TA hitch. Yes, hike your own hike and enjoy the experience, but there is a big difference in thru-hiking the length of a country, and cherry picking parts of a trail to hike, while also claiming a full thru-hike. It’s something we try not to think about because it is so prevalent, but it is something we’d prefer not to be around at the same time. It’s just a different mindset and tough to relate to. I know some may not like my thoughts on this topic or find it judgmental, but it is a factor in this hike and one I feel I should be honest about as it is like the elephant in the room and many ask me about that factor of this hike. Yes, people are free to do as they please, and it is difficult for me to put into words, but it is just a different mentality that doesn’t match ours. We are obviously in the minority, and I want to point that out for anyone coming on this trail as it is a daily interaction and the prevalence of it is quite higher than any other trail.

It’s difficult to explain it, but it’s not necessarily a judgement as a feeling. There is a unique bond among people on thru-hikes that comes from a shared common experience. You may not have done each section together, but there is that immediate bond when you know what the other has been through and that you’ve been through it too. You both can reflect on all the ups and downs and commiserate about You know how hard you have both worked to be where you are and it is unsaid. There is a bond that you’ve both set out on something that will be both physically and mentally challenging knowing it won’t always be easy or enjoyable, but that those difficult times are what make the good ones that much better. That bond and understanding just isn’t as strong with people who aren’t walking the same path. It’s like meeting someone from the same state you grew up in vs someone that grew up in the same town. What I’m trying to say is that I miss that bond out here and I wish I could experience it more. 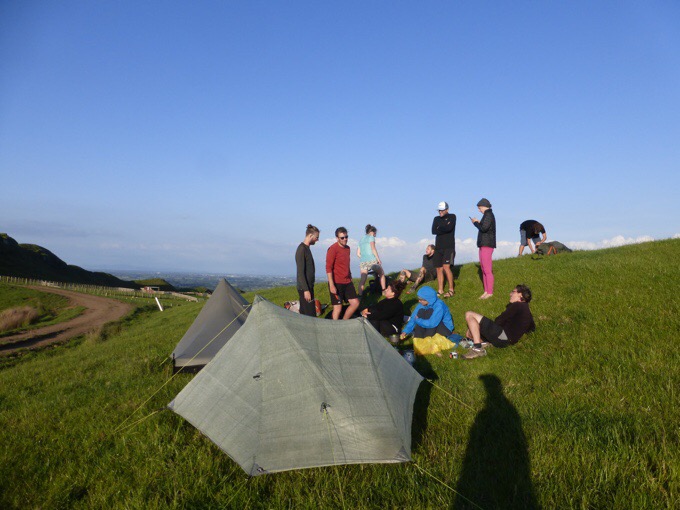 I do have to say, I’m pretty excited to be camped in relative wilderness! We are just outside of a residential area in some farmland and the scenery is wonderful. Becky is in the Tarptent Contrail for the first night and cuddled in her oh so fluffy down jacket and sleeping bag. We are surrounded by about 10 other tents, and there are a couple people laying out (almost 10pm) next to my tent listening to spacey music on a phone, and I hear the repeated clicking of something being passed and lit, the word cocaine came up in conversation…I’m trying to ignore that… 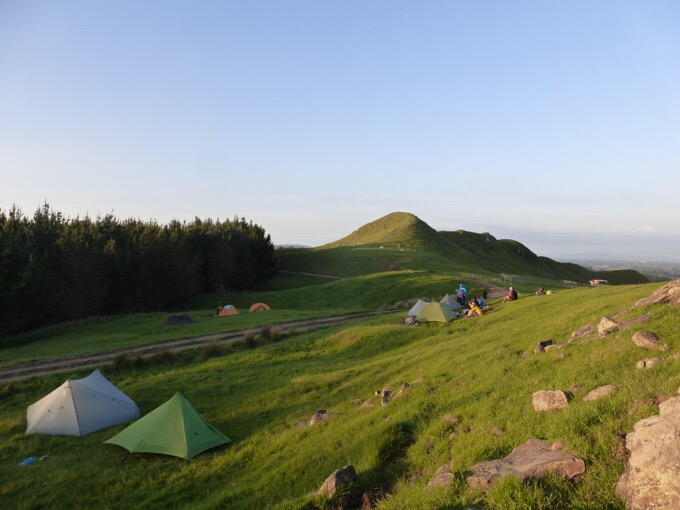