Day 62: Just The Break We Needed 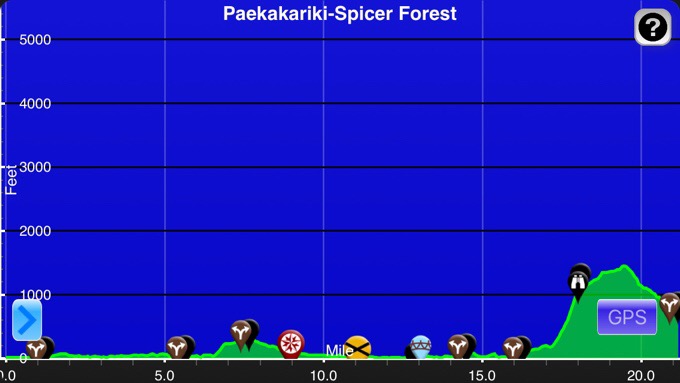 Elevation chart courtesy of Guthook Hikes Te Araroa App. Does not include the elevation gain/loss over the new Escarpment Track.

We left the Holiday Park at 7am wanting to get an early start on the day. We stopped early yesterday, so that makes today and tomorrow a bit longer to make it into Wellington. The forecast had a possibility of rain the second half of the day, so we wanted to hike what we could in the morning before the rain returned. Becky was feeling a bit better than yesterday, but ate a lot less than usual because her stomach is still not wanting solid food. We kept a relaxed and consistent pace with many breaks, and that strategy seemed to pay off. It also helped that we got a break from the rain and it was a really nice day. 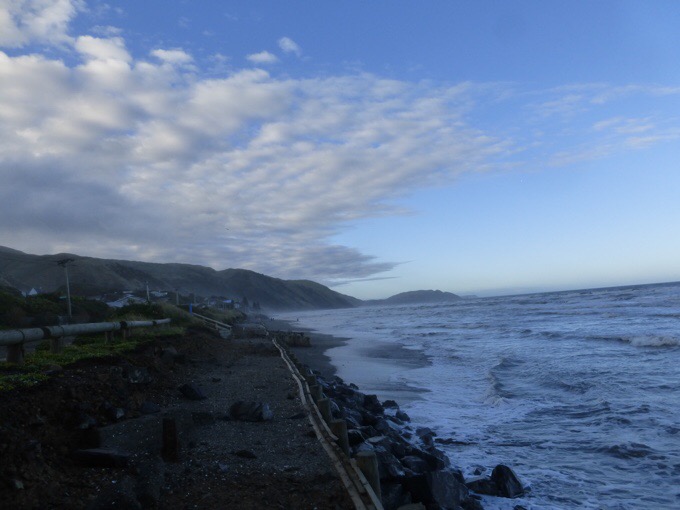 We started out on the much hyped Escarpment Track. In previous years, the trail just went along the highway along the coast for 6mi/10km. Now, there is a new section of trail that goes up on the hillside with many stairs, and includes two swing bridges. The opening of this short bit of trail was big news this year, and I think it cost a couple million dollars. 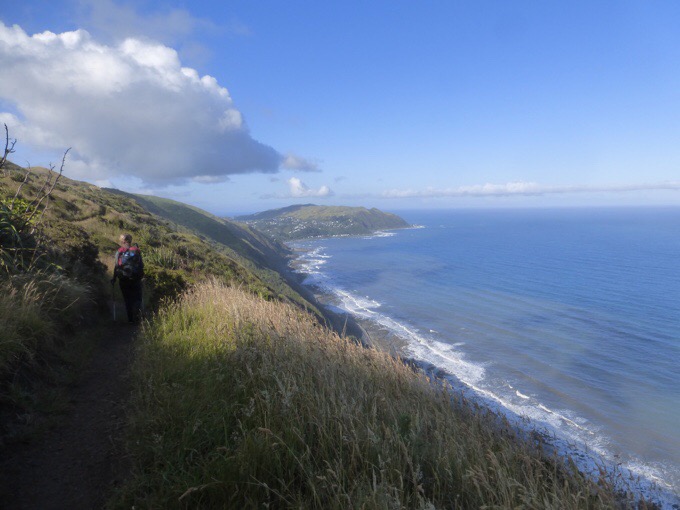 The views were great, but we did wonder why the track went so high up the hillside just to come right back down again. 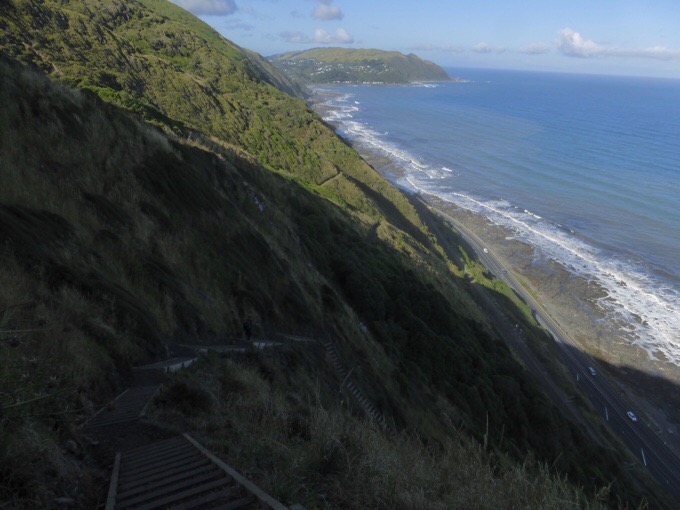 It was signed a ton all through the route as the Te Araroa. There’s been a lot of publicity and it seems to draw tourists with the idea of hiking on swing bridges with views of the ocean. 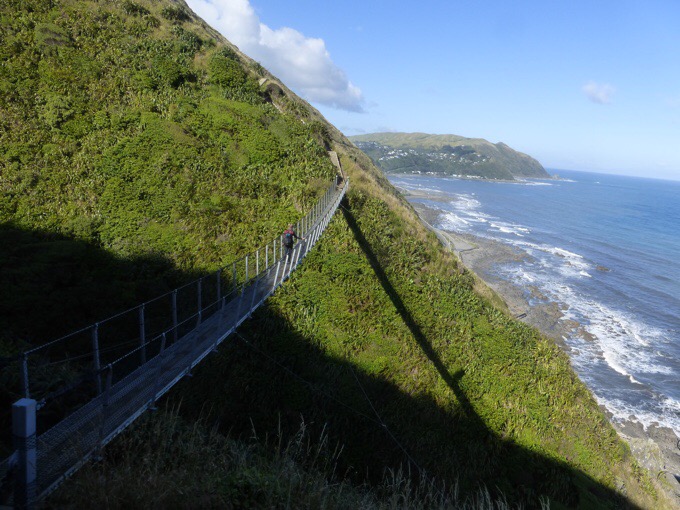 It was interesting. It felt somewhat commercial, artificial, and unnecessary. Kinda like an open house for a new neighborhood where the house on display is nothing like the rest of the neighborhood and it’s just a ruse to get people to invest in property there. In this case, the neighborhood would be the Te Araroa. If you have this cool hike that draws tourists to walk 6mi/10km of the Te Araroa, maybe they will think the whole track is this cool and they will want to hike bigger sections or the whole thing. It’s a bit of false advertisement and very interesting. The majority of hikers do feel that they fell prey to just this type of advertisement.

Give it a try. Look up one of the Great Walks or a travel idea for New Zealand and see how long it takes to get a link to the wanderlust filled site of the Te Araroa. Click around that site and see if you see any indication of all the towns, road walking, and deep mud forests. It’s not there really. It highlights the good parts, which you can’t fault them. They need people to hike the trail to fund it, but it’s a delicate balance of being forthright in the quality of the trail, yet getting people to know about it and hike it. It’s just not ready.

The oddest part of the whole thing is that we could feel all this as we were hiking the Escarpment Track and it felt really weird. The funniest part is that though it is labeled Te Araroa all over, they missed the opportunity of a really cool board at each end showing what the TA hike is and that it goes the whole length of New Zealand. Many might think that’s just the name of that particular trial. It isn’t something everyone knows out here. All of it was just and odd feeling to have on a “thru-hike.” I’ve been on tons of trails in various stages of development. I understand the great need of publicity and funding, but this is the only one that has such a commercial approach of false advertisement and that feels kinda yucky to promote tourism more than anything. I knew what I was getting coming in, but most out here did not. Becky is a prime example. She wanted to travel to NZ, clicked on a couple things, and got bit by the wanderlust of the TA. Like many walkers, now that she’s put so much time and money into being out here, she feels obligated to see it through even though it is mostly nothing like what is advertised. Ok, side rant over. They are trying!

Not surprisingly, the Escarpment Track ended at a local dairy where we could not resist the pull of buying ice cream! Yep, we got played like a fiddle, and totally knew it, but we gave up trying to resist it weeks ago. 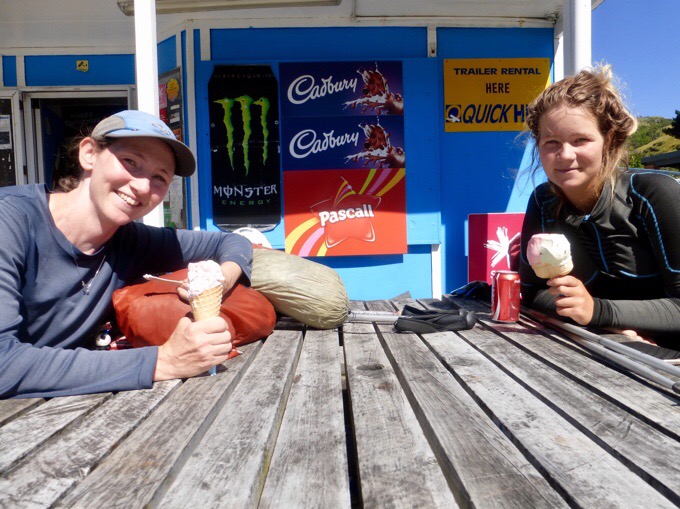 We spent the rest of the day hiking through the suburbs of Wellington as we inch closer and closer. We walked on a nice bike path along the highway. It would be great if all the highway walks were like that someday! 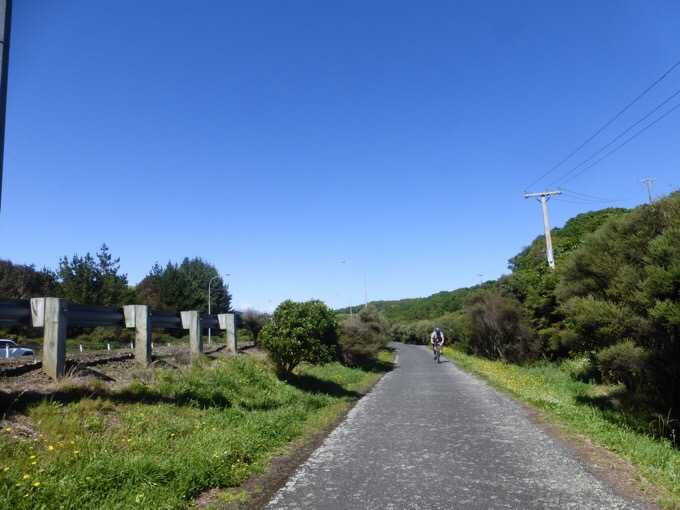 There were no lack of toilets, which was nice, and we found a spot easily to have lunch and get water from a sink. Becky’s stomach still didn’t want food, so she took the time to rest. She did have a theory carbonation would help and drank a couple sodas today. Yes, she did get an earful from me on the health of not eating much, but drinking two sodas, a slushy, and an ice cream today. She said it was just solid food her stomach doesn’t want. I guess ingesting something is better than nothing at all. 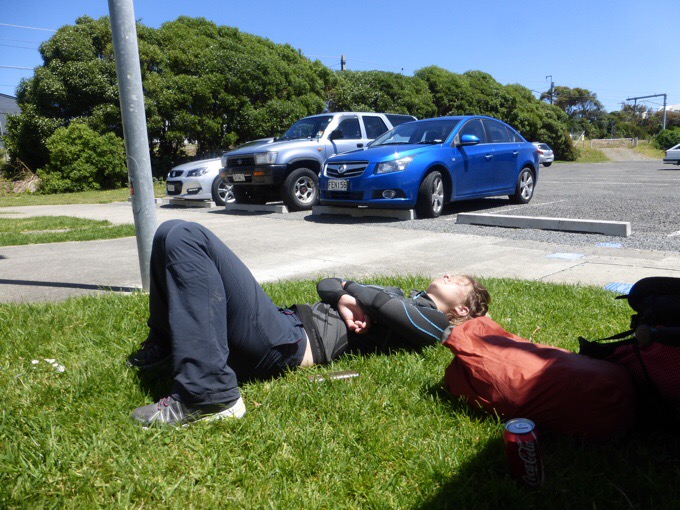 After lunch, there was a coastal pathway along a bay that was also nice. It was easy walking in great weather, and we wore shorts. We walked along the commuter train tracks into Wellington, and the path even went right through one of the train platforms. It was pretty tempting knowing we could jump on a train and be in Wellington in probably 20mins. We went by plenty of stores all day, and I bought my fourth pair of sunglasses for the trip, ugh. One pro of always walking near towns is that I can easily replace all I lose! Won’t be as accessible on the South Island. 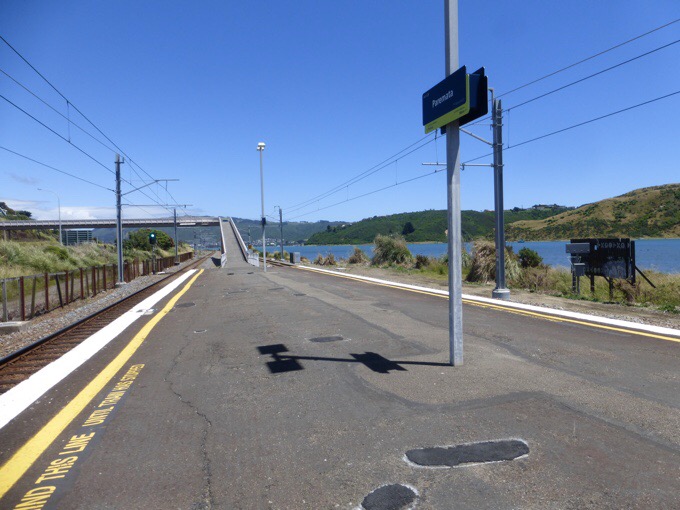 An anecdotal side note, Becky’s phone got wet back on the canoe trip (yep, Frits) and it has been slowly dying. Today she was too worried to shut it down because it might not go back on, but she couldn’t get the touch screen to work to turn it to airplane mode or turn off the volume.  The whole day, since we were in suburbs, we had service, and we got to hear dings all day as she got notifications for all her apps. Yep, on top of all this, Becky is going to have to buy a new phone in Wellington.

As we walked on, there was a great variety of sights including a nice lagoon with a park with tons of families and walking through Adrenalin Forest, a high ropes amusement park type of place. It felt like the track intentionally went out of the way to take us to that one and we wondered how many hikers impulsively pay to go on the course. 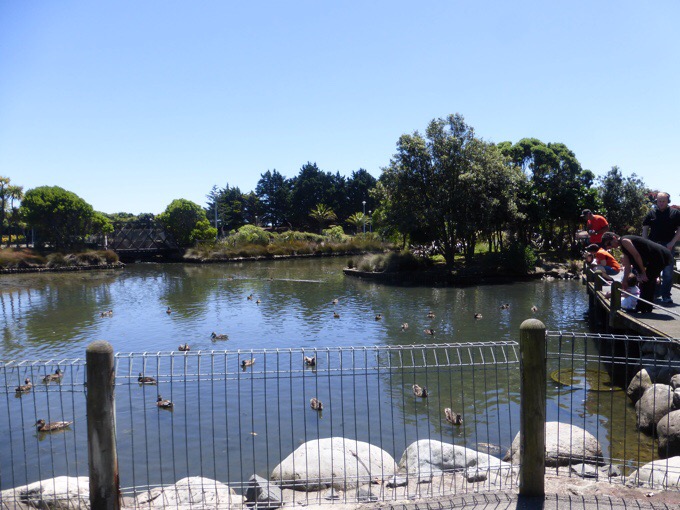 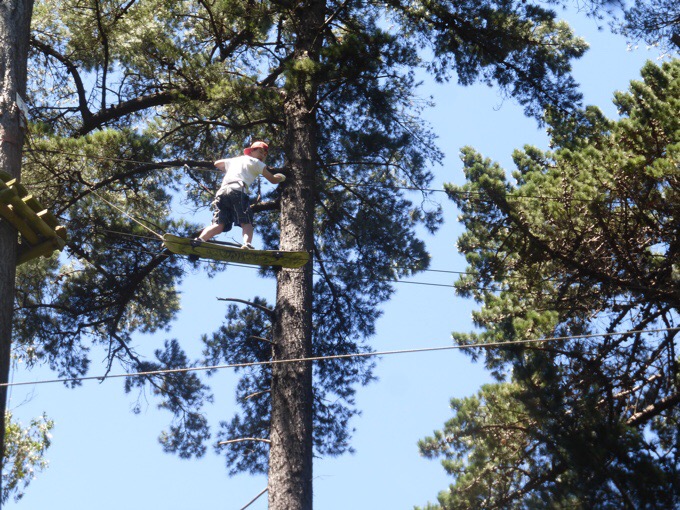 A kid on a high ropes skateboard at Adrenalin Forest.

The day ended with a hike up over Colonial Knob. It was a great path with 723 steps on the way up the 1-2hr climb. Many locals were there doing their nightly exercise up to the viewpoint, and that was cool to see. 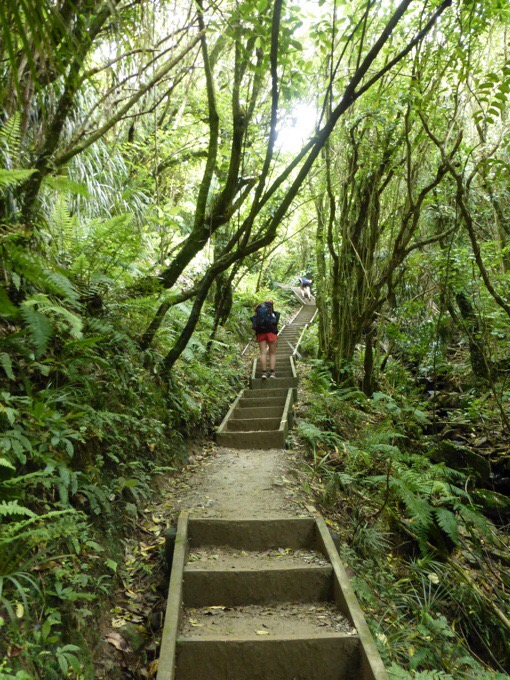 We managed to get lucky, and the cold wind and misty weather didn’t hit until the climb. Fortunately, we were sheltered in the forest for most of it. 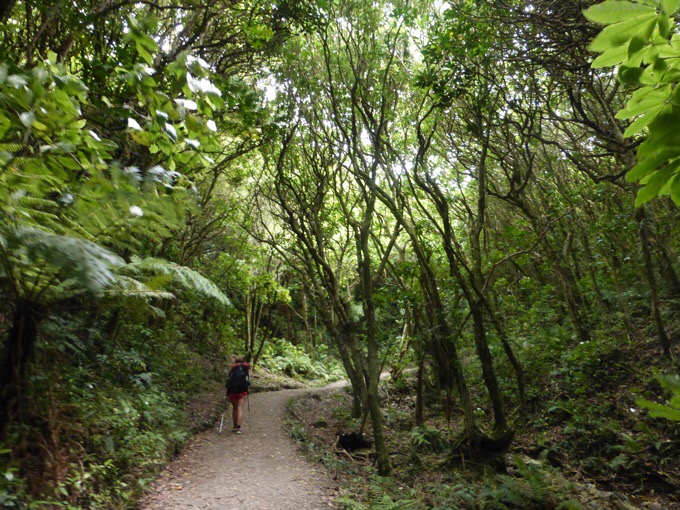 When we popped out on top, it was really cold and insanely windy. We almost got blown off our feet a few times by gusts. We had about 45min exposed going over the top before we dropped down into the protection of Spicer Forest. Luckily, it was light mist, and the rain didn’t amount to anything while we were up there. Temps up there were 40F/4.4C and some of the coldest we’ve had all trail. Sometimes these Antarctic winds blow up to NZ and these cold windy spells happen. A place down far on the South Island even got snow. Where’s summer!? We did discuss that maybe a mid to late November start of the TA may be better for weather as we both started in early November and have plenty of time to get through the South Island before fall arrives. 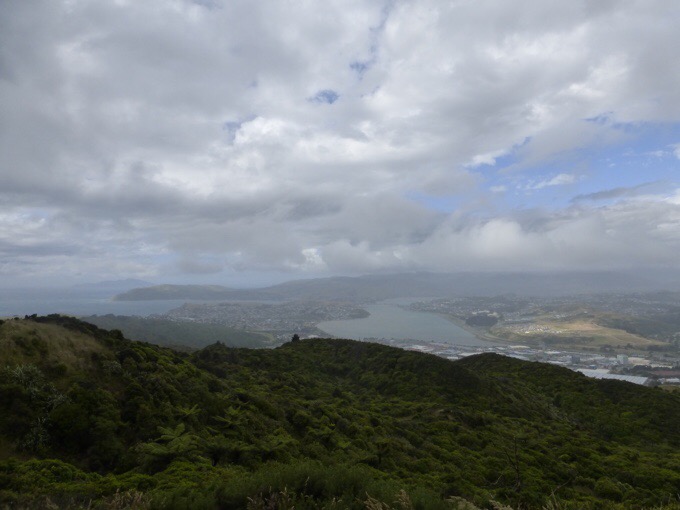 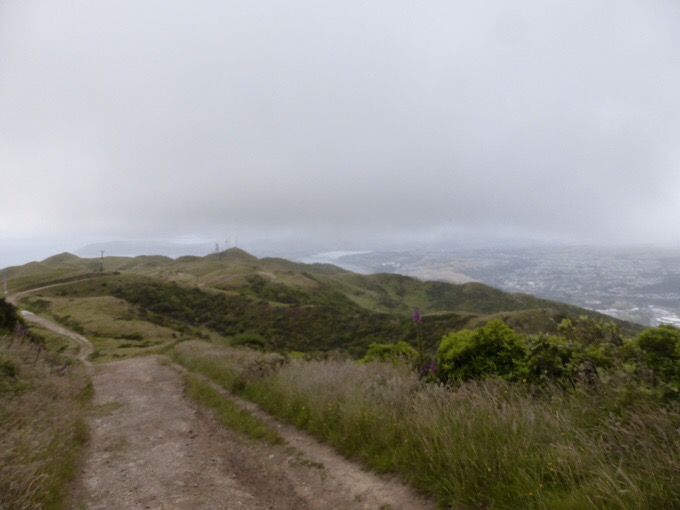 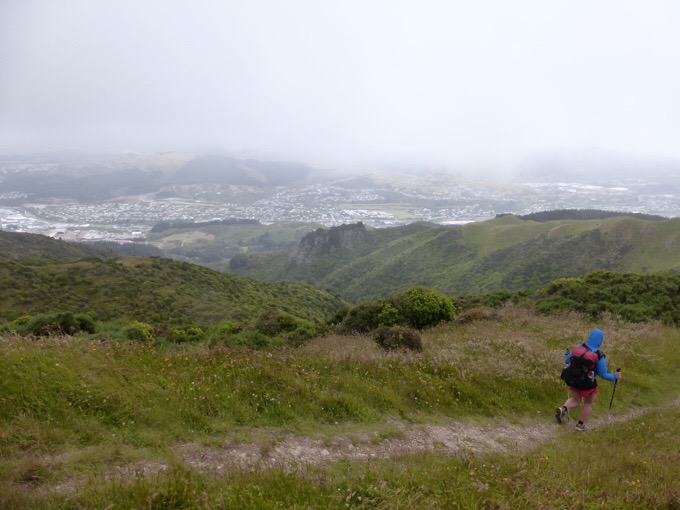 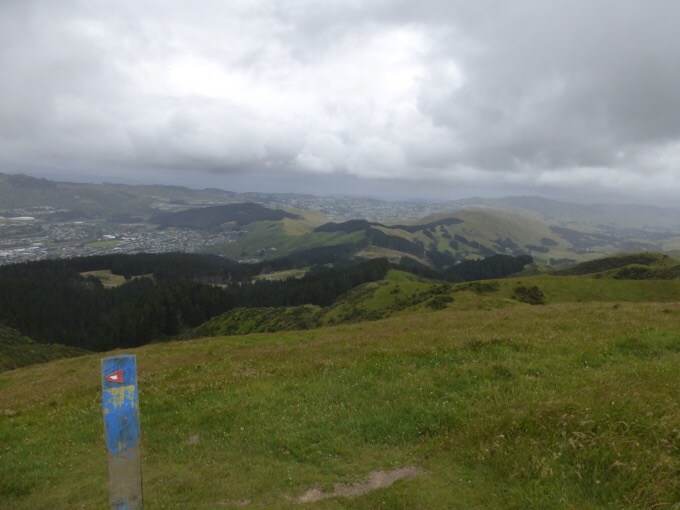 We dove down into Spicer Forest and found a great spot to pitch down low and out of the wind by 6pm, before the rain came. This is only the second time all trail that we’ve camped somewhere with just the two of us. It rained lightly on and off for a few hours before clearing. 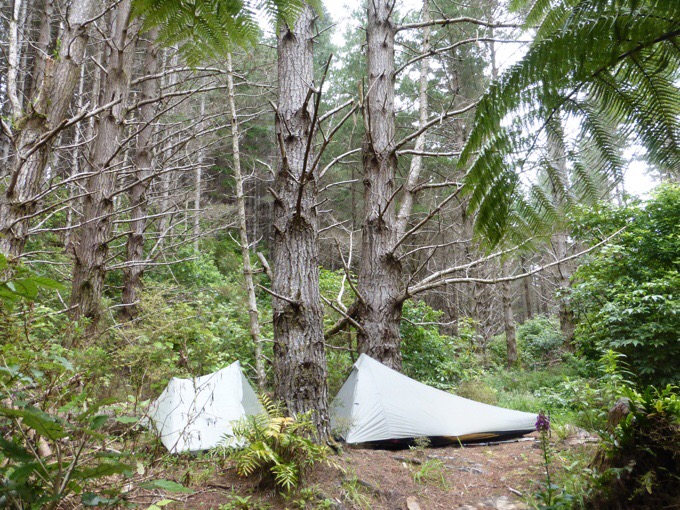 Becky was able to get some Ramen down before falling asleep before 8pm. As the day went on today, I noticed her frequent and urgent bathroom stops and put together that she has a urinary tract infection that she was aware of and was thinking would pass on it’s own as they have in the past without antibiotics off the trail. She’s only had antibiotics once in her life and I get the resistance. She totally didn’t want to tell “mom” and get a lecture from me, but she sure did! She’s not fully aware of how quickly things can go bad out in the wilderness if they aren’t taken care of and caught early. Yes, she gave me permission to write about this, and I do hope maybe reading this some of what I keep saying will sink in. These are common for women on the trail. She is thinking the exhaustion and stomach are not related, but it all is. Her body needs to rest and she needs to help it by eating better and treating the UTI! I’m trying to convince her to get meds because it won’t be easily accessible on the South Island at all. It’s tough because I see where all this is headed and am like a broken record with the lectures. I swear I do feel like a mom with how I feel that it all falls on deaf ears and she’s determined to do it her way and learn the hard way. My worry is that it’s really impacting her health and possibly ability to do the TA together. We are taking a double zero, but with all there is to do with prepping resupplies for the South Island, getting gear she needs, and getting a new phone, it still won’t be enough of a rest. I don’t know how long I can hold on and keep waiting as these last couple days have been a big test of my patience knowing all this is avoidable with more effort and foresight. It doesn’t just affect her when she doesn’t take care of herself. Tomorrow we have one full day of hiking into Wellington and it will be clear weather, yay! Today was pretty cool with a great deal of variety. Tomorrow we complete the North Island!