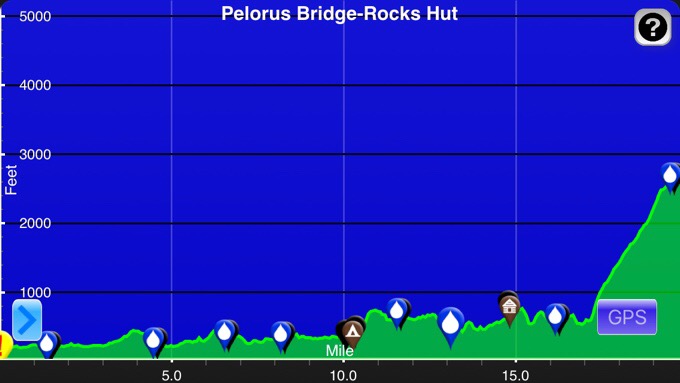 I got maybe a few hours of sleep last night. Everything was super quiet at the Holiday Park (in Havelock), and it was perfect sleeping conditions, but I was wide awake. I know it was probably left over anxiety from the decision I made to move on without Becky for now, but I knew I had made the right choice deep down. It had been too late to write by the time I got to my tent last night after dinner, so I did sleep a bit, but after waking many times, I just took the time to write. I tried to sleep a bit more in the early morning and eventually gave up and just packed up to leave. I needed to hitch 20km out to Pelorus Bridge, where I left off the other day. All my hitches the last few days have happened within minutes, so I had hopes for a quick hitch with a 20km sign and Saturday morning traffic. Well, it turns out there isn’t much traffic going through Havelock at 7:30am on a Saturday, and the ones that are driving through, aren’t interested in picking anyone up. I was surprised that it took me an hour before someone pulled over.
An hour is a long time. I was feeling the lack of sleep and was having trouble keeping my eyes open with the boredom of standing there waiting for a car to pass every so often. Of course, all that was running through my head was the thought that it was the fates telling me I’d made a mistake. That I wasn’t meant to leave without Becky. At the rate I was going with hailing a ride, I was half expecting Becky, Tom, and Christophe to walk up after leisurely waking and having breakfast they planned to make at the Blue Moon Lodge. Of course, standing there for an hour rethinking my decision, and over thinking it all, I just got myself worked up and my stomach in a knot. Thankfully, I was finally picked up by Kevin, a man on his way to work in forestry. He wasn’t planning to go as far as I needed, but had time and was kind enough to pass his turn and go the extra bit to get me out to Pelorus Bridge. His little dog was with him; and it wasn’t the dog you’d imagine a guy in forestry to take to work, so it was pretty cute. THANK YOU Kevin!!! 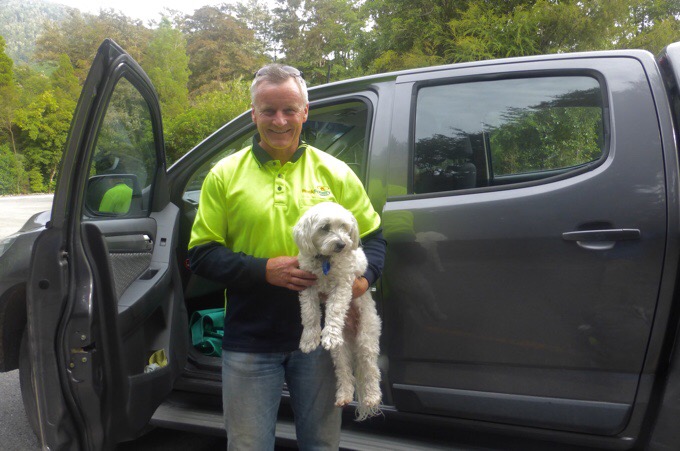 I knew I had a tiring day of walking ahead, and was happy it started off with a 9mi/14km road walk that was mostly dirt and gravel through farmland and forest to the start of the Pelorus River Track. 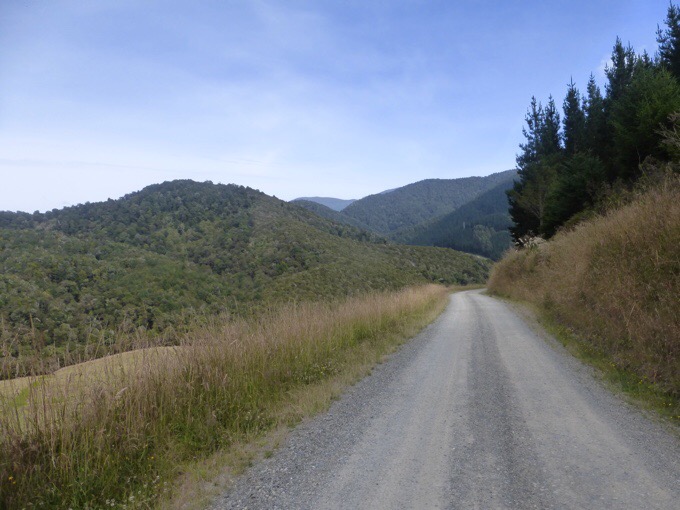 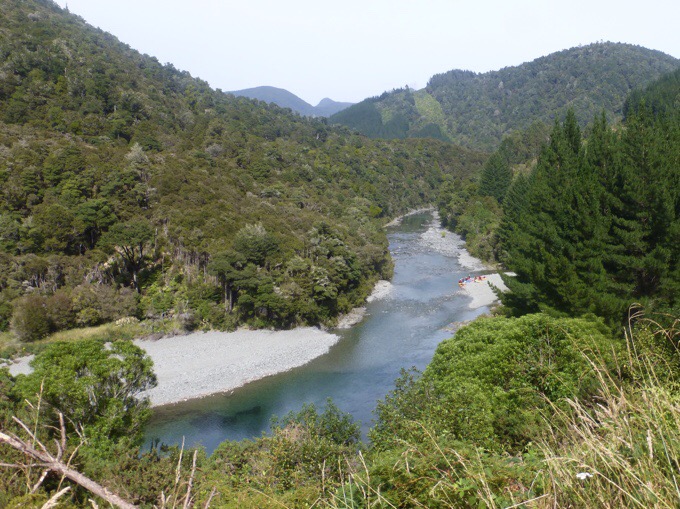 The river track was just that, it followed the river. The Pelorus River is quite nice with clear aqua water. It was pretty low given that it hasn’t rained much lately. I did stop along the river for a break at one point, but the sand flies (like biting gnats) were the worst I’ve seen all trip, and I had to keep moving to avoid being eaten. 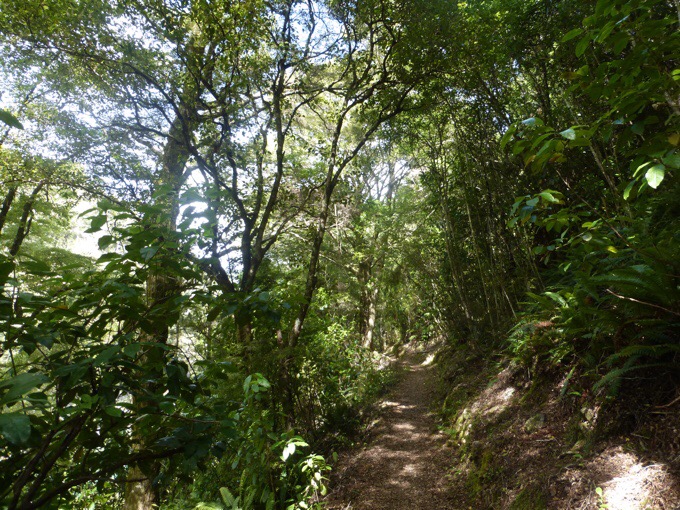 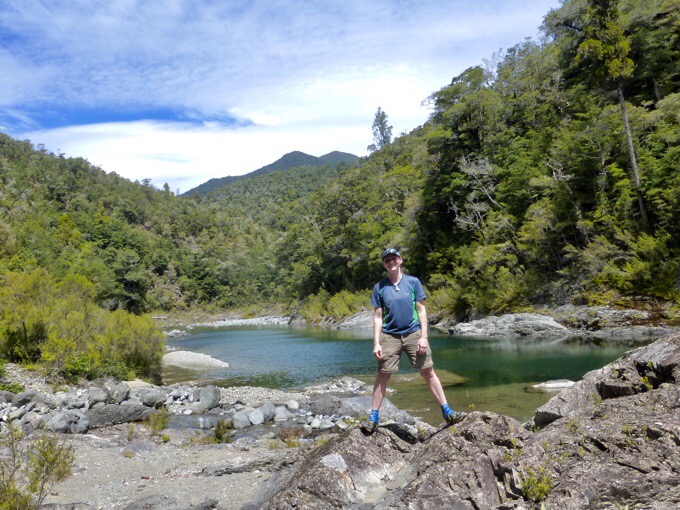 I felt like today was an adjustment phase. On the North Island, this hike was synonymous to hiking with Becky. It was less about hiking the TA and more about a hike with Becky. It was an adjustment, and definitely felt weird to be doing this without her. On top of not sleeping, my stomach was in a knot, and I was not hungry at all. I knew I was just sad and that it would take time to pass. 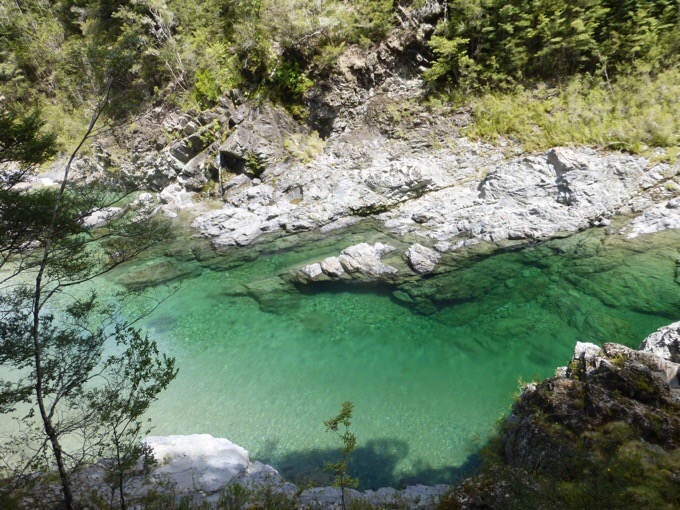 However, I know deep down that we are quite different hikers in this terrain. We had a good window to this in the Tararua Range. We have greatly different paces and mentalities in this kind of terrain. I find that it can often fuel me to get in the mindset of a challenge of a climb or difficult terrain, whereas it is understandably very draining for Becky, which is totally normal. I’ve made it clear that I’m the abnormal one here. This stuff isn’t easy, and I’m not called Wired for no reason. I am lucky to have endurance to get through this type of terrain, and to do it for a more extended period of time each day. It’s one thing to do it for a day here or there, but it’s over an extended period of consistent days at that pace that’s tough for most to maintain without draining themselves. That is how I enjoy it, and we found that yes, Becky can do that type of approach, but then her body understandably crashes and needs recovery time. It wouldn’t be fair to her to make her experience one that isn’t healthy for her. The point is to enjoy it. In the end, it means multiple days of difference between the two of us on a leg like this one.

It isn’t that I’m in a hurry, but I know that by waiting, I’d be giving up a lot. I am all the way over here in New Zealand, and I hope to make side trips either along the way or after the hike. I want to use the days while I’m out here. Our different approaches on this terrain is also fewer hours of hiking in a day, which I honestly know would bottle me up over an extended period of time. I do think that when I do my side trips, it will put our paths back in sync towards the end of the South Island to hopefully hike together again. I had to keep reminding myself that because I for sure went back and forth on it. All I had to do was stop a hut early today, and I’d be with Becky, Tom, and Christophe. I had to keep reminding myself that I was doing the right thing and that we will probably overlap again. I’m choosing to see this as a temporary separation and feel in my gut that we will finish this trail together.

With my stomach in a knot, I knew I just needed to ride the wave, and eventually get past it. It was ok to be sad, but I also know that my emotions tend to come out in stomach tightness and I need to eat. I ended up having to carry my tuna wrap lunch as I walked, and I just took bites slowly until it was down. Also, in the midst of that adjustment phase, I was also adjusting to hiking on the rocky rooty terrain of the Richmond Range. It felt jarring and uncomfortable after so much cruising this last week on the Queen Charlotte and Abel Tasman. It took a couple hours, but around 1pm, it finally clicked and was feeling more fluid. 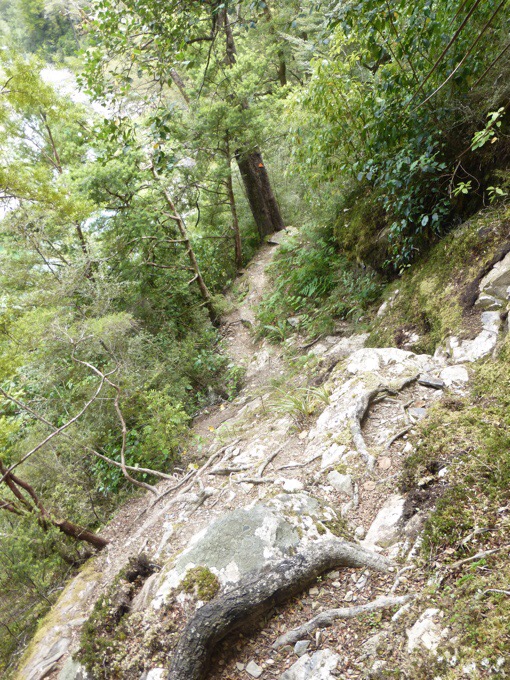 It’s such a mental game out here. The terrain can really sap your morale, and that’s a big reason why hikers tend to slow. I try to find the fluidity in it and get a rhythm going. I had been in a funk until a local guy with no poles and a dog came flying past me totally in the rhythm of root and rock hopping. That woke me up, and I realized I was fighting the terrain rather than trying to have fun with it. Once he passed, it hit me that I needed to find that rhythm, and once I found it, I was having fun and my stomach and mind cleared. I was cruising and enjoying it!

I came upon two TA walkers who had just found a tiny kitten on the track that was weak and quivering. They couldn’t leave it behind and were torn as to what to do as they will be out here for over a week. The hope is that at their next hut they can find someone walking out. It seemed to be all alone and it was a tough choice to take it or leave it. They were also planning to stay at the same hut as Becky and the crew, and if Becky sees that cat, there’s no way she’d be able to let it go. So random for it to be right in the middle of the track. 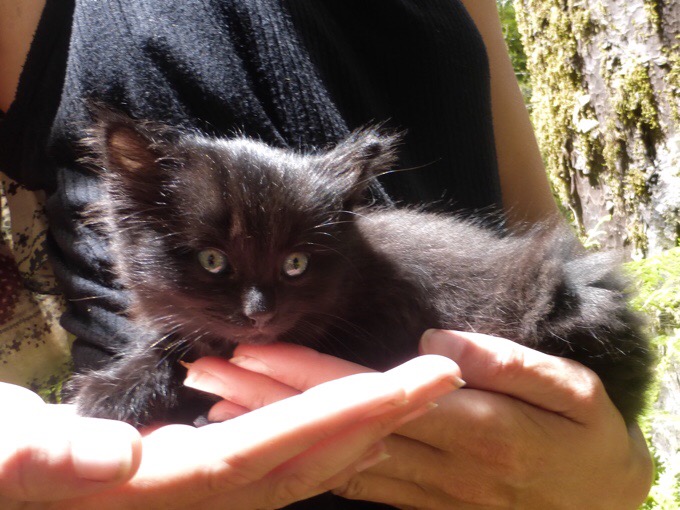 There were a handful of suspension bridges today over the river. Man, they are crazy with how they swing and bounce and are clear wire so you see right through them. 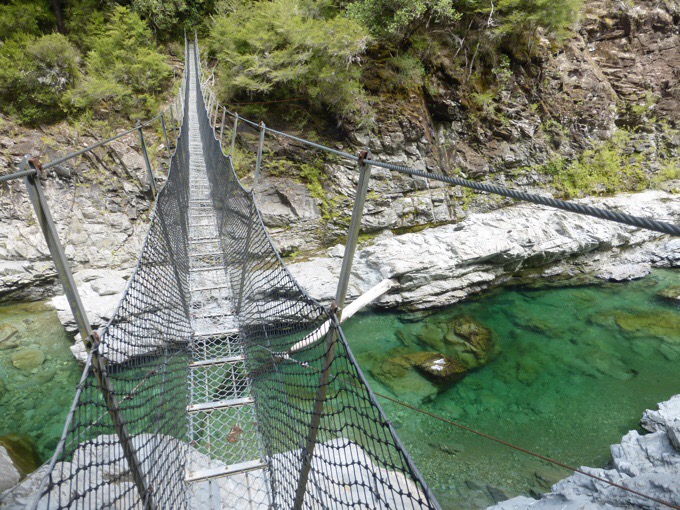 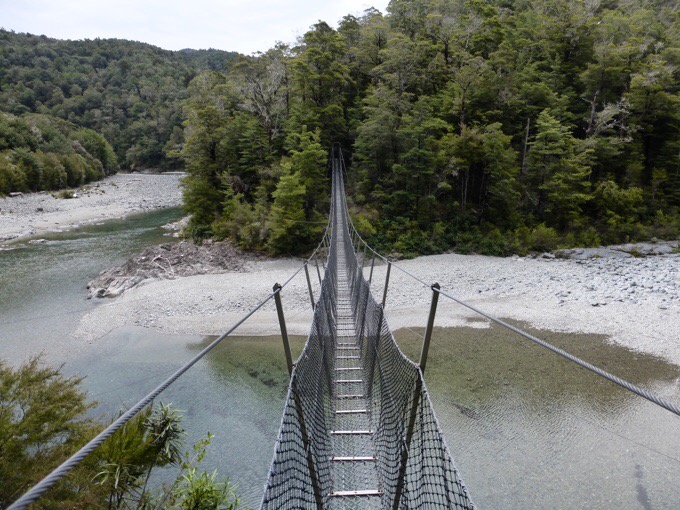 The final climb of the day was a doozy. I knew my ending hut was at the top, so I charged it and flew up. It was definitely a tough one, with a ton of roots, but the trail was dry, and I found that if I kept the rhythm going, I could get it done quicker with less exertion. 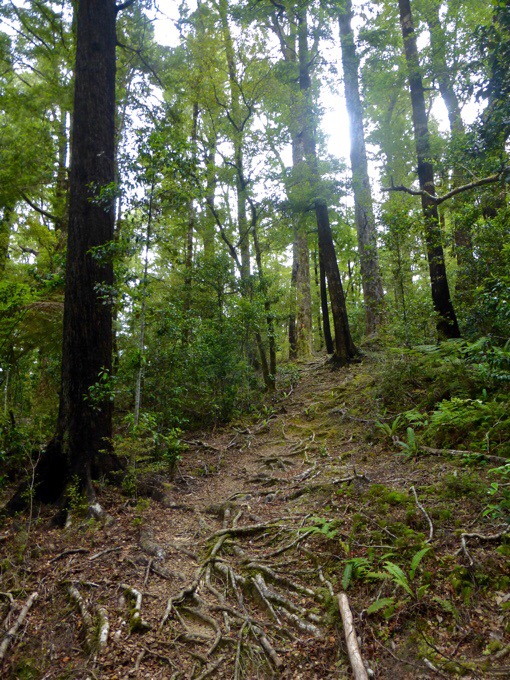 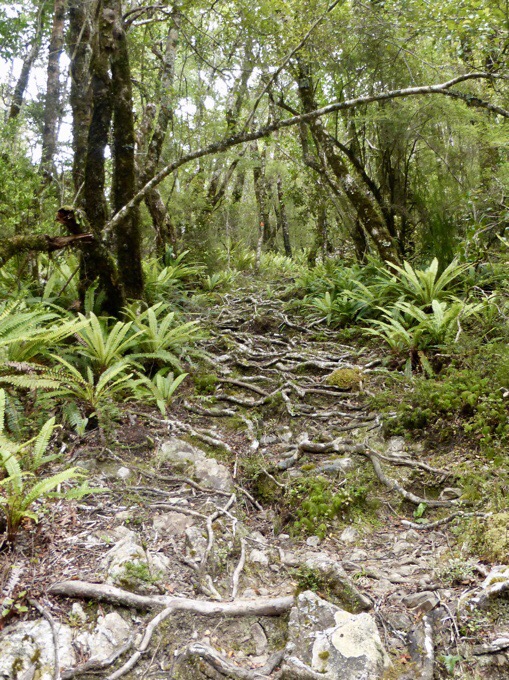 I know the upcoming days should have more views, but today was a bit of a morale killer to exert so much with so few rewarding views. I hoped to at least get one up top at the hut I was headed to and did get a slight one of some major mountains in the distance. 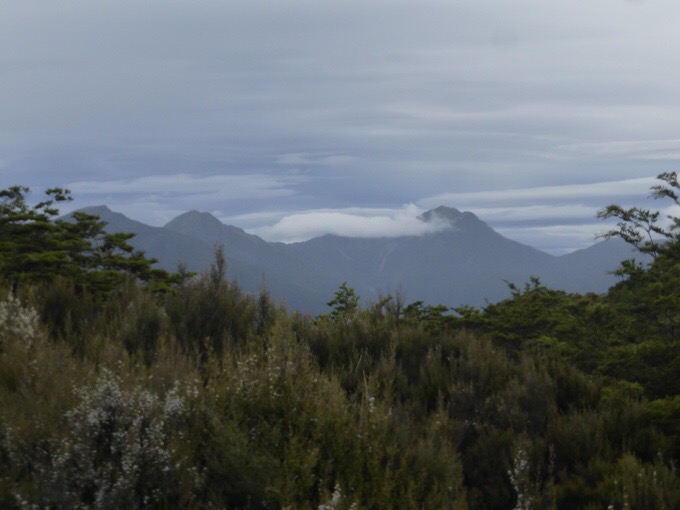 I made it to the hut at 5:30pm. It holds 16 people and there were four there. A Swiss TA couple was there that just started the TA only doing the South Island, which is really common and a great option. The rest were locals on shorter trips just in this range. At 8-8:30pm, just as we were all laying down, more people came in waves. I think about 8 more arrived. Fortunately, I have my white noise, and I’m very tired, so I’m dozing off easily. I woke at midnight to a silent hut, whew! No white noise needed. I did some writing and went back to sleep. The beds are arranged to have four mats next to each other on four platforms. Two high, and two low. Luckily, I have an upper platform all to myself, and the latecomers all went to the other side of the hut since the earlier arrivals were already mostly on this side. Rain was predicted to come overnight, and it’s blowing down hard now. It will lift by the morning. It’s so nice to have these huts! It was a rough start to the day, but I feel very happy right now and that I’ve made the right choice. We will see how tomorrow goes. 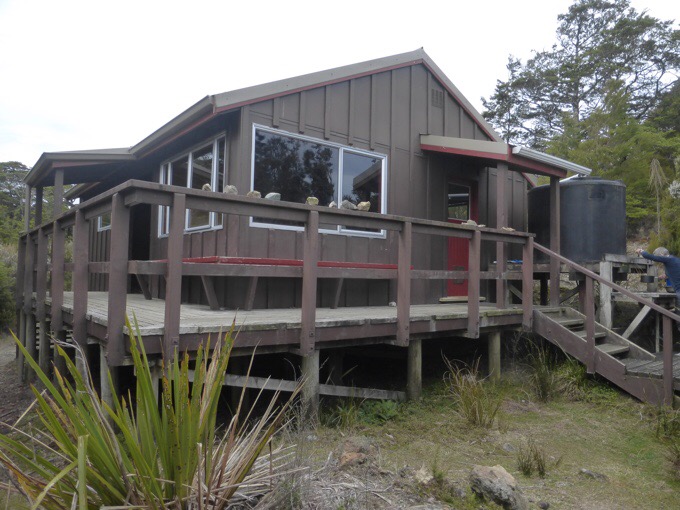 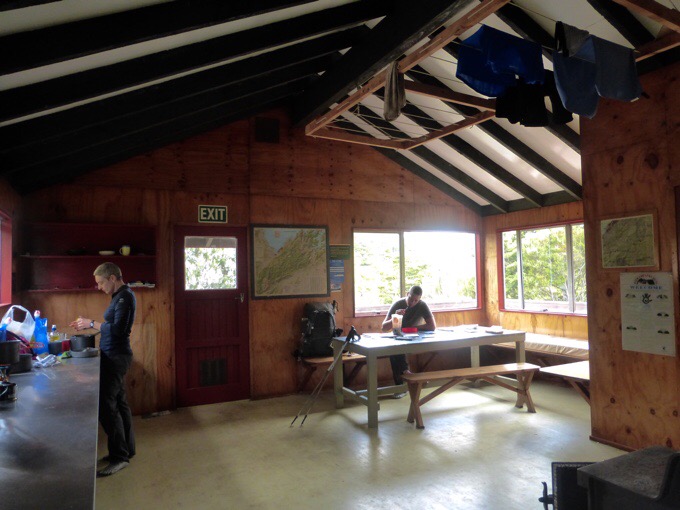