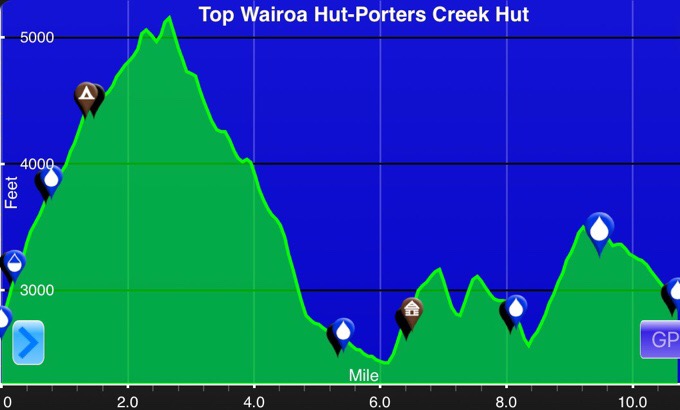 I slept really well last night in my tent with the nearby stream. So well that I was wide awake at 4:30am. It’s amazing to me how refreshed I can be after a good night of sleep on the trail even after the big day yesterday. I finished up yesterday’s journal and made myself lay there until 6am. Then I packed up and hiked out at 6:40am into a still darkened forest. The morning stretch of trail was along left branch of the Wairoa River all the way up to Top Wairoa Hut. The trail wove back and forth running alongside the river. It was peaceful and scenic with the river running in a gorge at times and waterfalls. 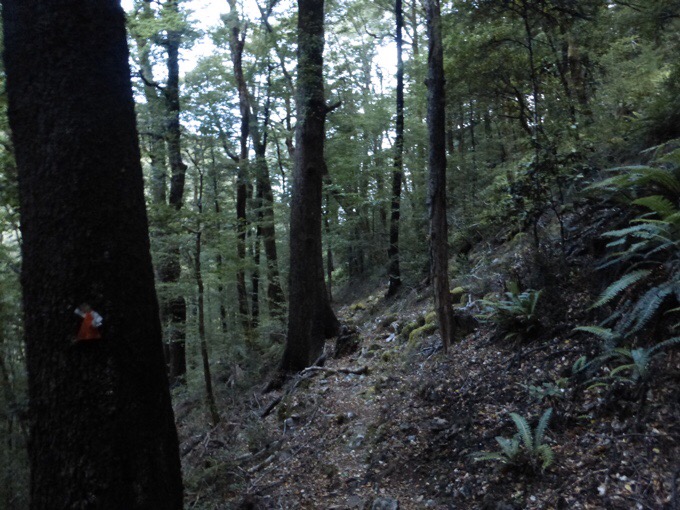 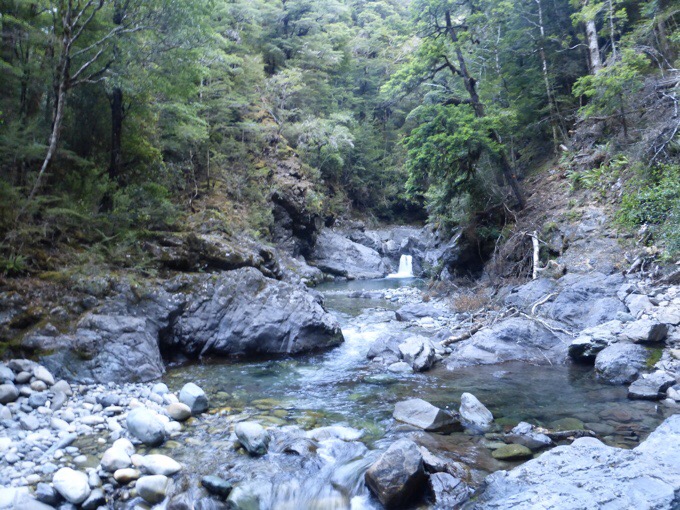 I had trouble enjoying it fully because the trail wasn’t wide and benched (flat). It was often narrow and angled downward with a lot of debris, (what they call sidling) so it could be easy to accidentally slip off the side of the track when the trail was elevated well above the river. It was nerve wrecking and made me feel unsure of my footing. Also, there were 8 crossings of the river. I’m not a fan of crossings, and that elevated my anxiety. The larger rounded rocks in the river were quite slippery, and mixed with my unsure footing on the trail, I was feeling more cautious than confident and I didn’t like that feeling. 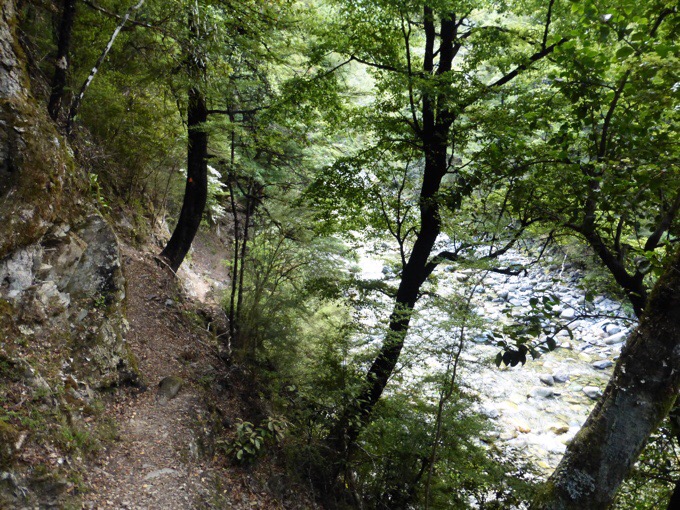 Difficult to see in a photo, but the trail was narrow, crumbly, and angled.

I made it to Top Wairoa Hut at 9:20am to find five TA walkers still there and in their sleeping bags. It was a group of four young American guys and a solo girl from Switzerland. They were waiting for the clouds and fog to lift a bit more before hiking out today. It seemed that it was lifting, so I continued on up to the high point for today. 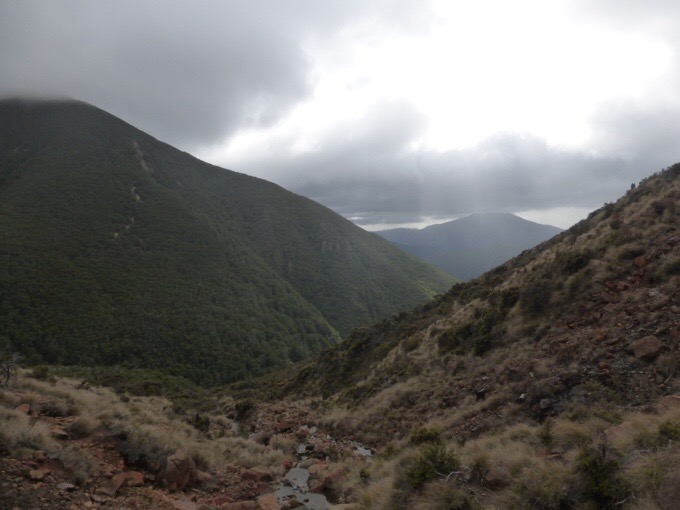 Looking back as it seemed that the fog and clouds were lifting.

Within about 15mins, the fog returned and I found myself hiking in a cloud. The forecast hadn’t called for rain today, so I figured I just needed to gut it out and get over the climb and it would clear once I got down again. It got cold quickly with wind and some blowing rain, so I ended up putting on all my rain gear including my gloves, beanie, and buff to stay warm. 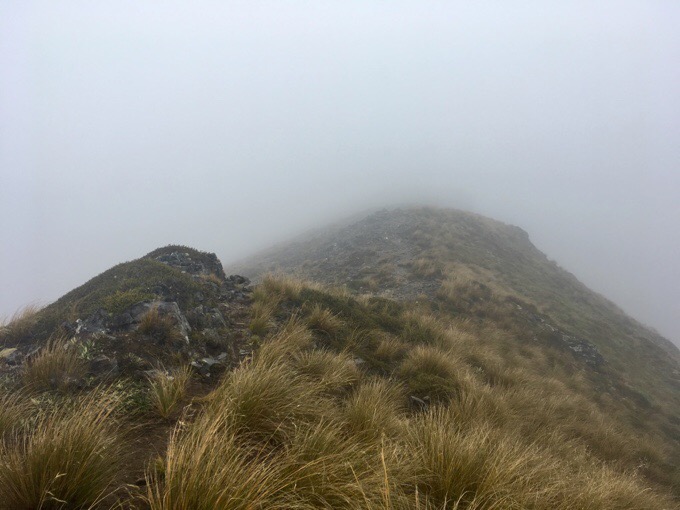 It is a scenic part of the trail, and I unfortunately missed out for an hour or so as I could barely see where to go with all the fog. 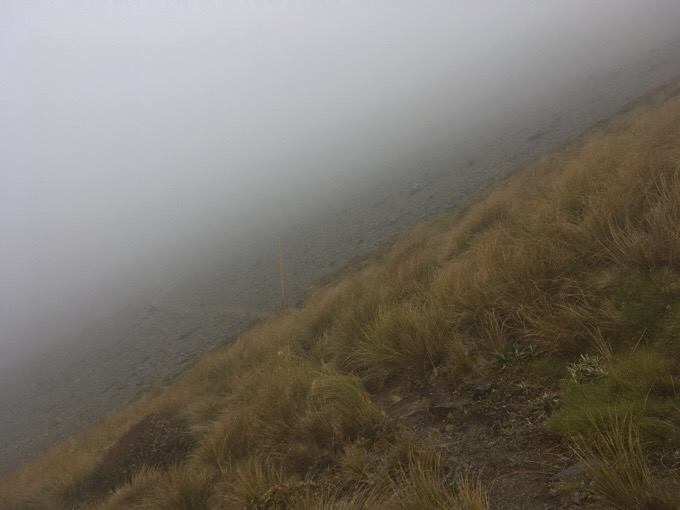 Sometimes the track was visible if I looked down, but often, it was through rocks and tussock, so there wasn’t a path and I needed to go off the tall orange poles in the distance. I was able to see maybe 50m in front of me, and often had to stand still for a bit as clouds blew off for a moment so I could see where the next marker was. My pacing was slowed both by navigation and by me changing clothing and dealing with having my camera out or in my bag as the rain kept stopping and returning. 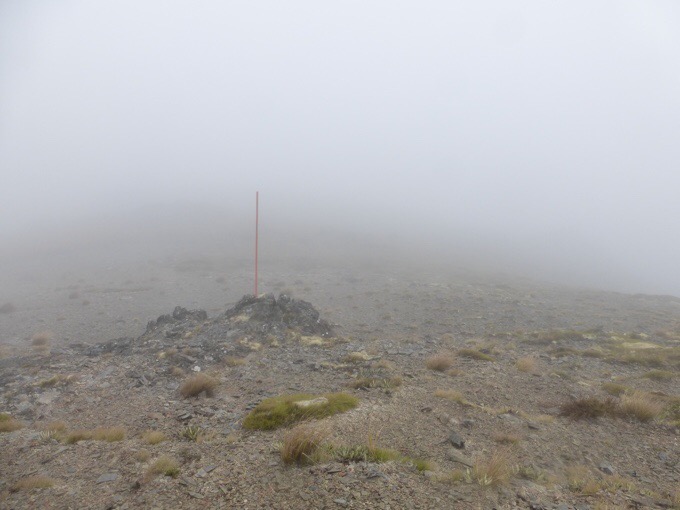 As expected, as I headed down, the fog moved off and I was able to see views of what many say is the most scenic stretch of the Richmond Range along the TA. I agree that of all the days, today had the more unique and varied scenery and I really enjoyed it. I have to say that it’s amazing that this is the first real fog I’ve hit all trip. It happens to everyone at some point, and I’m just glad it was just for a bit over an hour and passed. Not bad at all, and I was glad it cleared. 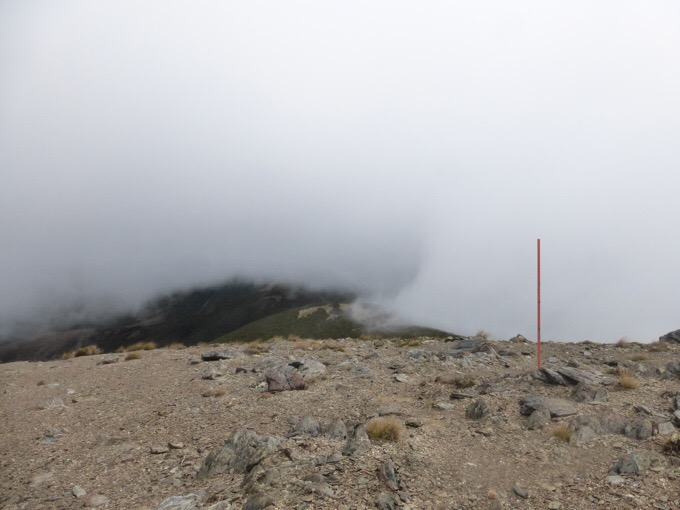 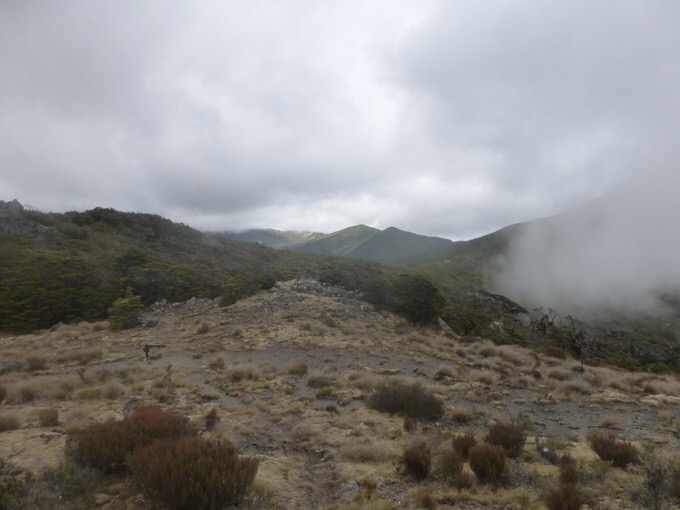 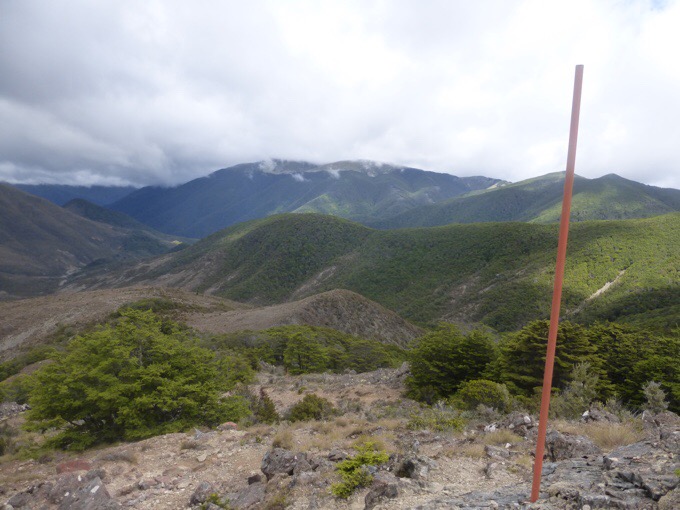 I decided I wanted to have lunch inside, so I waited until I reached Hunters Hut at 1pm. I really like this hut. I’d say that Rocks Hut and Hunters are my favorite ones along the TA route through this range. It holds 6, but is very spacious and has a table inside, which most have not had. Also, it has great views including the view off the porch looking back at what I’d just come down. 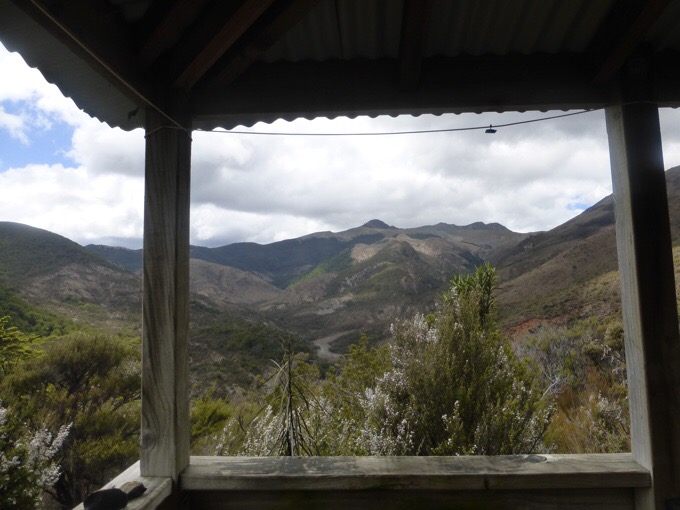 What I just came down. 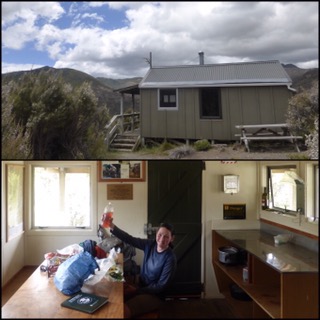 Enjoying lunch in Hunter’s Hut with my Crystal Light pink lemonade I had sent over from the US. Love it!

When I left Hunters Hut, I could see that I was going to reach Porters Creek Hut fairly early, but that it would be too late to comfortably make it to the next hut. I checked the weather using my Delorme (now bought by Garmin) inReach. It seemed that the main rain wouldn’t come until tomorrow afternoon, but that there was a chance of wind and light rain tonight. I decided to hike relaxed to Porters Creek Hut and just see how I felt about going on when I got there. The hike from Hunters to Porters was a bit slow with a lot of up and down. It started with a bunch of rocks to get over, and that’s when I began to feel how sluggish I was from the big day yesterday. 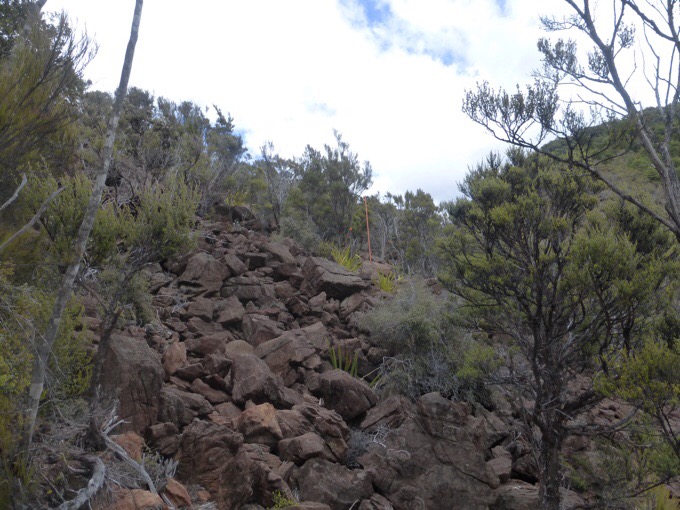 From there, it was just up and down like a rollercoaster down to valleys and then up over a pass over and over. There was some sidling on fine gravel in shallow dirt that was worrisome because it seemed that anyone could easily slide off of it kind of like walking on ball bearings. I wasn’t a fan, and it was the main thing hikers mentioned later at the hut. 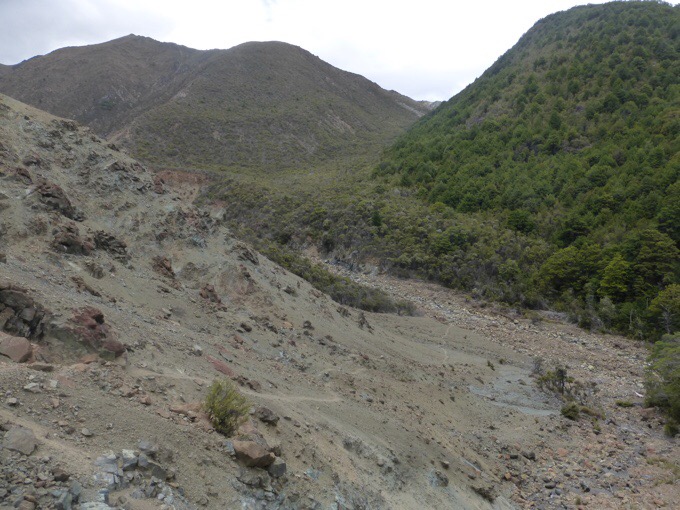 That path was not level and was angled down slope on ball bearings making for cautious slow hiking down. 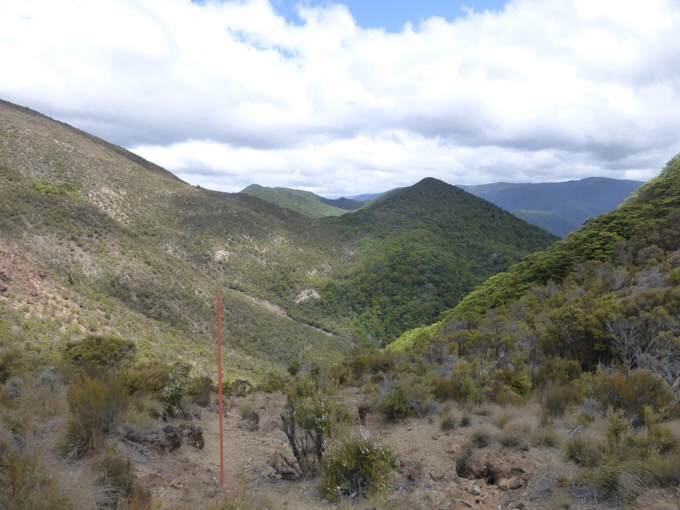 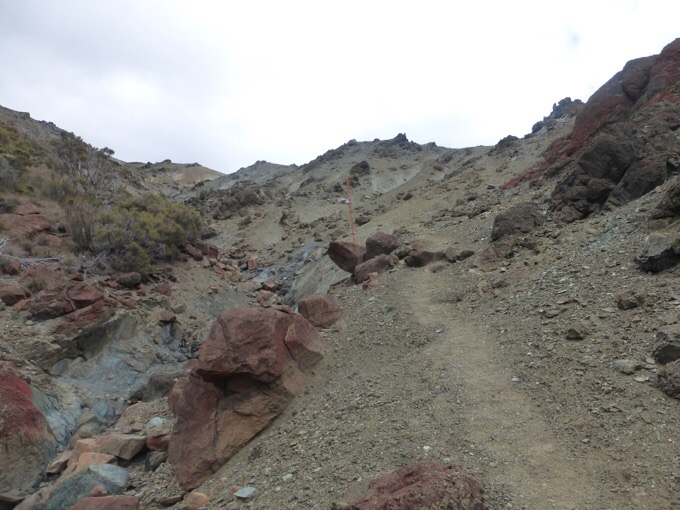 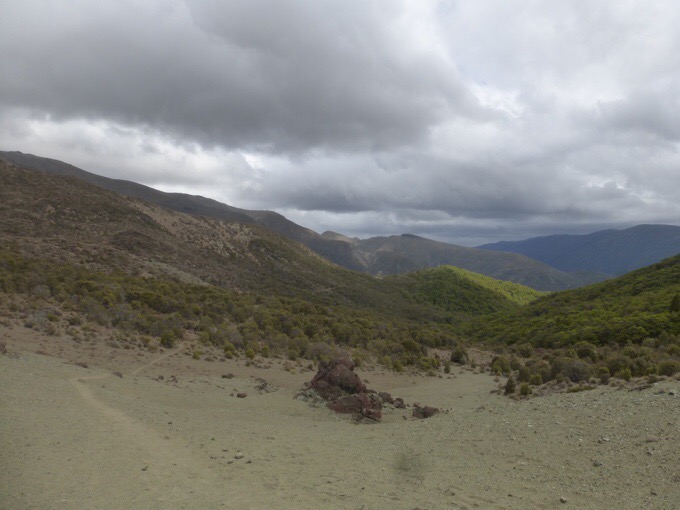 I could see Porters Hut for quite a long time before actually arriving there. On the way down, someone kindly left a note of reminder that there isn’t water at the hut and to fill up a the stream just before it. It was apparently also in the trail notes, but I’m terrible at missing details in those. It was Becky’s job to read the trail notes, and give me the highlights, and I am really disliking that I have to read them again! Becky may need to audio record the highlights for me to listen to. 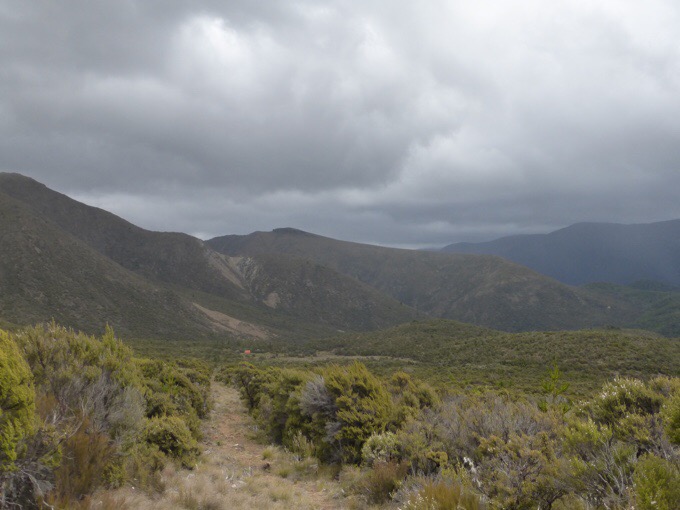 Porters Creek Hut is the orange speck in the middle bottom. 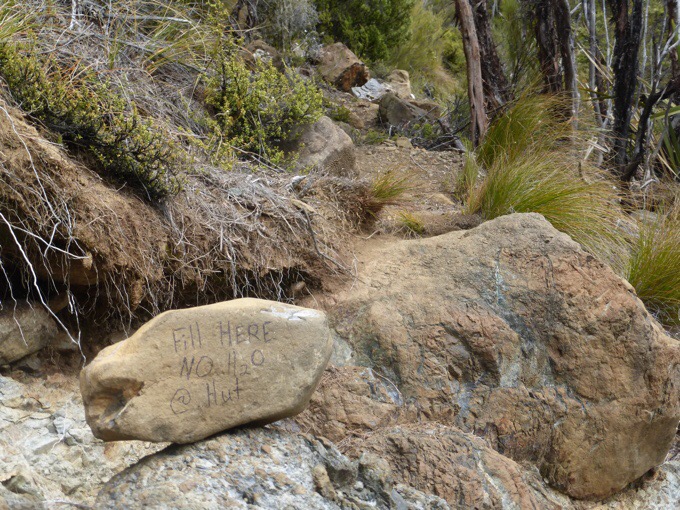 When I got to Porters, which has six bunks, a father and his adult son were there. They were out for a few days and were nice. It was 4:30pm, and I decided to stay because the weather wasn’t looking great and I knew I wouldn’t want to hike all the way to the next hut. I wasn’t sure if there was sheltered camping between the two, and I’m well set up to get to town tomorrow before the major rain was due, so I was happy with how far I made it.

I knew there was a big chance that many were going to land at this hut with how many I’d passed and who was with me last night all headed this way. I really don’t like this communal sleeping thing, but it is great to have shelter in bad weather. It was raining lightly when I first arrived, so I took a bed. As people arrived, the hut filled up with TA walkers. Even a true northbounder who hiked up from Bluff arrived. Now that northbounders are intersecting, it is compounding the camping situations. 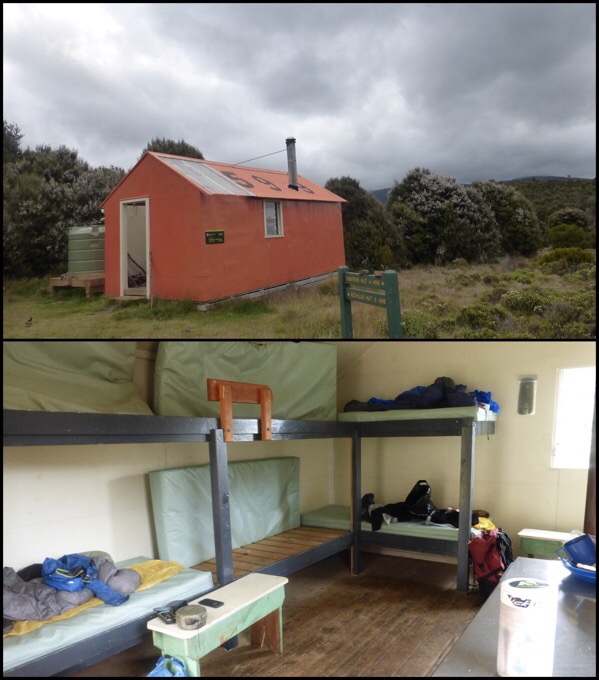 The last to arrive after 6pm were the four young American guys. With weather totally fine outside, they asked if they could all four come into the six person hut and sleep on the floor. Seriously!? Look at the photo of the inside of the hut and envision that. They didn’t even start hiking today until 11am, and made no efforts to get here first, but are completely comfortable with just arriving and inconveniencing the rest of us. Yeah, there’s a great way to represent the US. No one said yes when they asked, and someone even asked them if they had tents they could pitch. They said they did, but they’d rather not pitch them. They walked out only to return a few minutes later and ask AGAIN saying they didn’t want to pitch their tents if they could help it. Again, silence with no one wanting to be the jerk to say no. Then the northbounder guy in the hut said sure, come on in. What!? Ugh! I understand jamming extra people in huts when it’s bad weather, but it’s a perfectly fine night.

Not only that, but then they came into the hut to cook, when it was nice out and there was a picnic table, and it got cramped. Fortunately, I’d eaten early, but it was just too much and my claustrophobia shot through the roof. I let them know I was going outside to pitch my tent and one of them could take my bed. Then one of them said two of them could sleep in a tent. I asked what about the other two? Will there still be 8 people sleeping in the hut? I got silence in response and told them that I seem to have no choice since they are determined to sleep in the hut, and I really can’t sleep well with so many people in such close quarters. They still did not volunteer to sleep outside. So, out I went. Ridiculous. 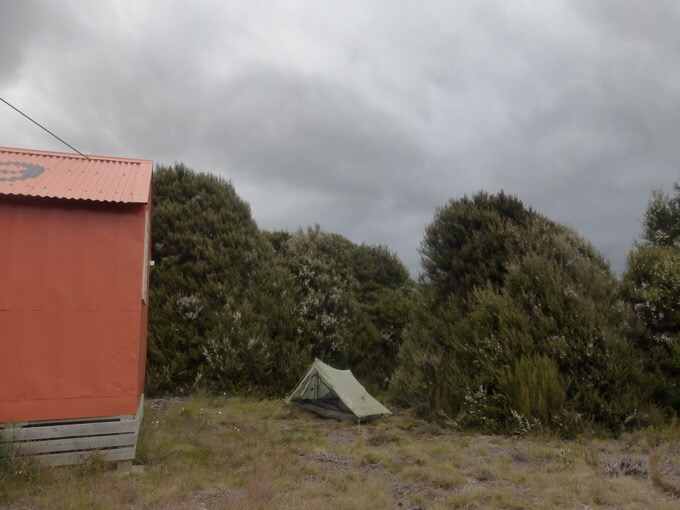 Again, being packed into a hut like sardines is not the experience I thru-hike for. I don’t want to be in a single room breathing in the breath and hiker stench from nine other people. No wonder they have issues with norovirus in the huts right in this area! If there was bad weather, I’d totally understand, but it’s totally fine outside. It actually works out better for me to be outside. That’s why I slept outside at the hut yesterday too. I sleep so much better in my tent and there is a good sheltered spot (lots of good sheltered spots) by the hut. My point is that it really was a shit move on their part to impose like that, and put everyone in a position where they felt like they couldn’t say no when they obviously weren’t keen on the idea the first time they asked. Everyone else got their ass out of their sleeping bag this morning and hiked there to earn their spot. They deserve to enjoy it without having a packed hut, inhaling the breath of another four hikers on the floor, and hearing the commotion of that many more people trying to sleep. Way to give Americans a bad name. Like people don’t think we believe we’re entitled enough already. You all get the point. Ok, rant over. On to better things. The temperature outside and quiet sound out here is perfect for a good night of sleep. Plus, I have a great view! Looks like I’m going to just make it through the Richmond Range with good weather! 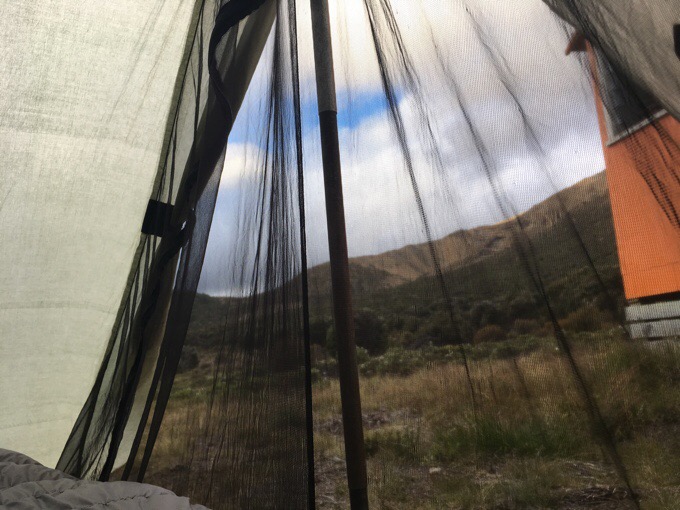