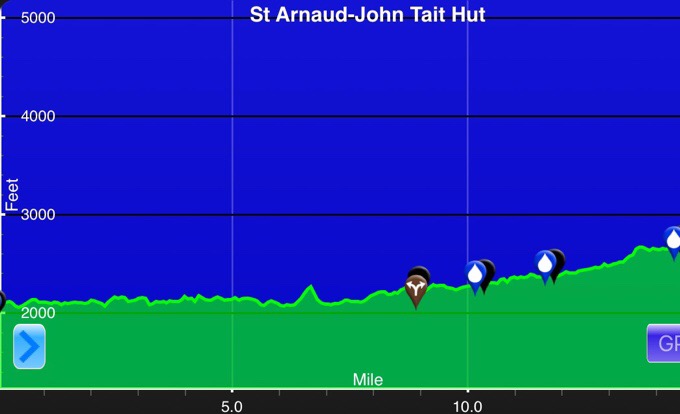 Note: I didn’t have service to post this last leg, so I’m just now catching up after four days. Apparently, there was a troll, which I’ve mentioned before doesn’t phase me. I so appreciate all of you being there for me while I was not there. As I said before, I work as a substitute teacher and am not new to getting that random displaced anger every so often, so I don’t take it serioulsy at all. Being out on the trail, I’m especially removed from it, and don’t absorb it at all. Some people are just angry and that’s sad, but we won’t feed it. In the future, we can refrain from wasting time on those comments. They will be deleted in due time, so no need to comment or feed a troll. I do have the ability to change the settings in comments to preapprove each one individually, but for now 99% of comments are well intentioned, so I’m keeping it open. My friend said it best when he said, “You officially have trolls. Congratulations, you really made it!” Cracks me up. Seriously though, thank you all for being there for me! Now back to the regularly scheduled programming…

As forecasted, the rain dumped down last night. It was amazing to have timed it to be in town for that. It’s tough to know for sure because I feel so isolated from news and such here, but it was apparently really major and caused flooding in some areas. As the morning went on, the rain was forecasted to lighten up, and it did with moments of blue sky and sunshine trying to find its way through. I knew conditions wouldn’t be ideal, but timing seemed right to head out and gut through the flooded trail in light rain. Dealing with swollen streams and flooded trail is just part of hiking in New Zealand. It is said that the water levels lower just as quickly as they rise. I would have liked to wait another day to let the water drain out a bit, but the next bout of rain (possibly heavy) comes through in ~3 days. There are two passes and a river crossing I’d like to get through before that next system comes through to avoid having to wait out weather in a hut for possibly a day or two. Again, there’s a window, and if all goes as expected, I am hoping it will work out just right to make it through this leg without incident.

I stayed at the lodge until checkout at 10am. I liked it there at the Travers-Sabine Lodge, and recommend it. Even at full capacity, it was spread out enough to be quiet and spacious. I went by the DOC center on the way out of town to make sure there weren’t any updates I had missed. They just gave the usual warnings about flooded and possibly washed out trail. They also mentioned that many major roads had been closed due to flooding, so it really must have been bad. Apparently winds were super high as well. It makes total sense why they have the hut system out here with how often strong weather moves through.

I got started about 10:45am, and immediately noticed the high water level of Lake Rotoiti, the lake I’d be following the first 2-3 hours of the day. The water was about level to the dock. I’ve seen photos of the docks along Lake Rotoiti before, and the water is usually much lower.

Lake water level to the dock. 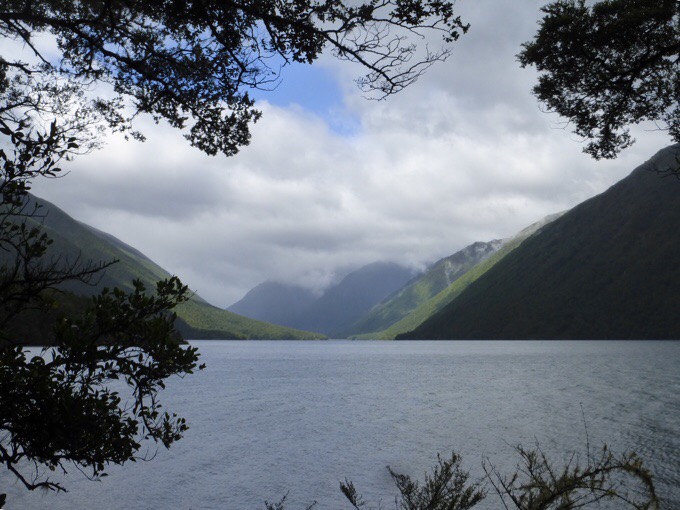 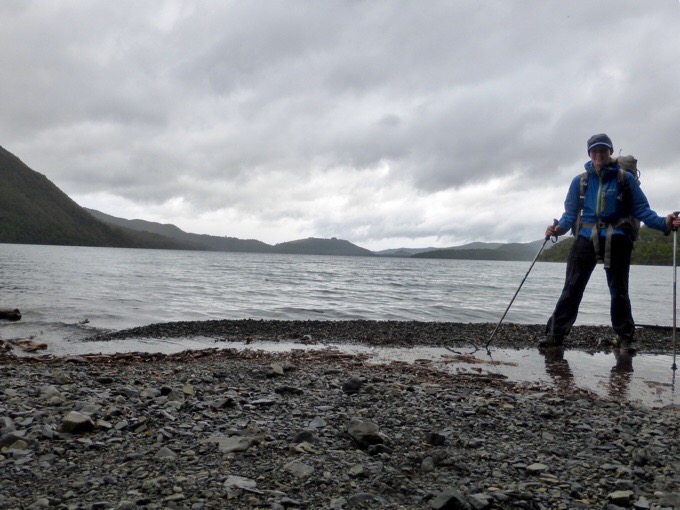 I can’t overstate how flooded the trail was today. It should have been a straightforward cruise today, but I quickly found that would not be the case. The nice wide trail soon became a stream. I feel like I walked in water for 50% of the day today. 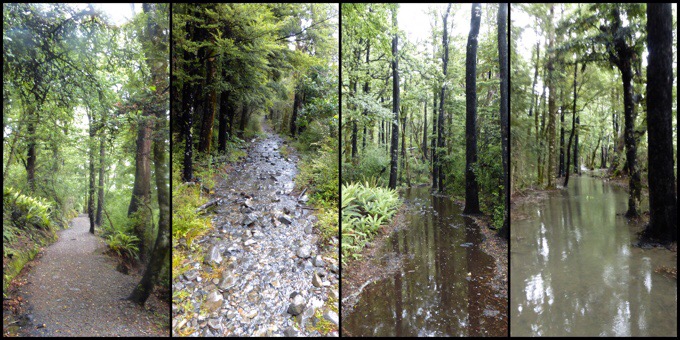 Starting out dry and then completely flooded trail.

The day was a bit of a blur with the combo of all the water and a light rain on and off. It was a few hours of hiking in the woods with mostly flooded trail to Lakehead Hut. 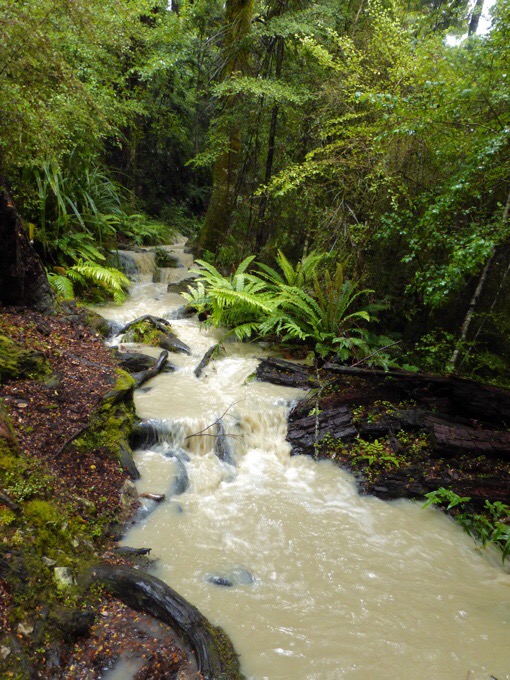 There were some side streams that needed to be crossed, but nothing very swift or frightening thankfully. There were some times when it took a bit to find the trail on the other side. There may have been trail hidden under the water or maybe cairns got washed away. 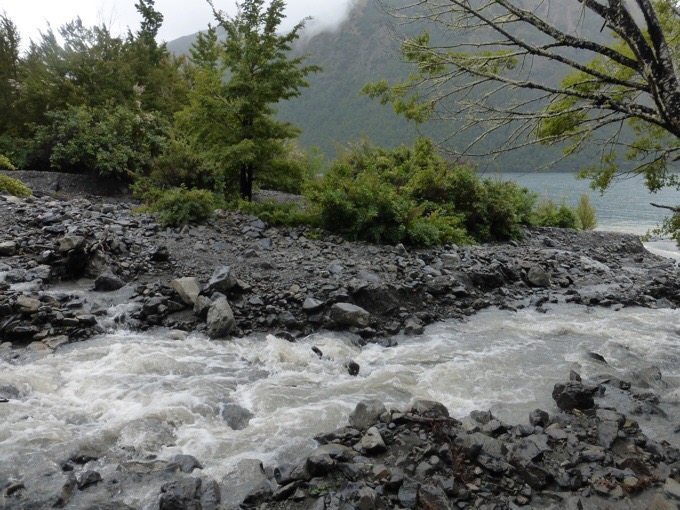 One of many swollen side streams that needed to be crossed.

I found it to be stressful as it definitely triggered my PTSD of flooded trail and raging water crossings from the record high snow and snow melt of PCT 2011. Later, when I reached the hut, most seemed to have had fun with it, but I think I was too anxious about crossings to relax today. Also, my feet were pretty numb most of the day with the cold water. I just wanted to get through it and stay warm, so I just snacked and didn’t stop for a full lunch or break. 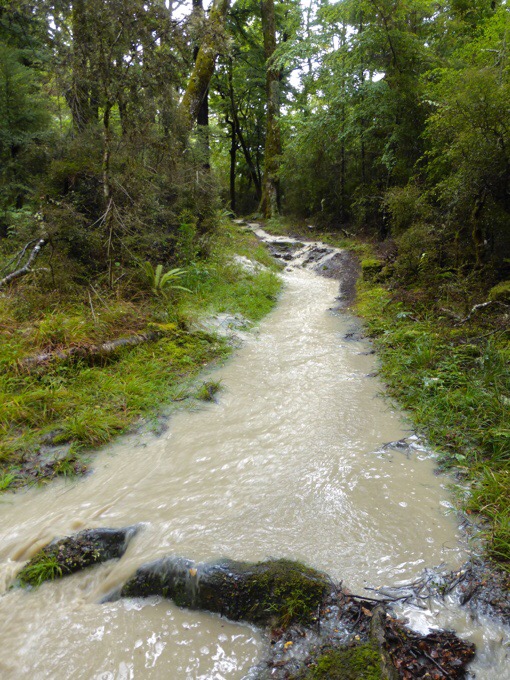 The trail was a stream.

When I reached Lakehead Hut, there were a few TA hikers I haven’t met before that were taking a break before moving on. I kept walking and the terrain changed from a flooded wooded trail to a flooded grassy valley. The water was everywhere and quite wide in places. 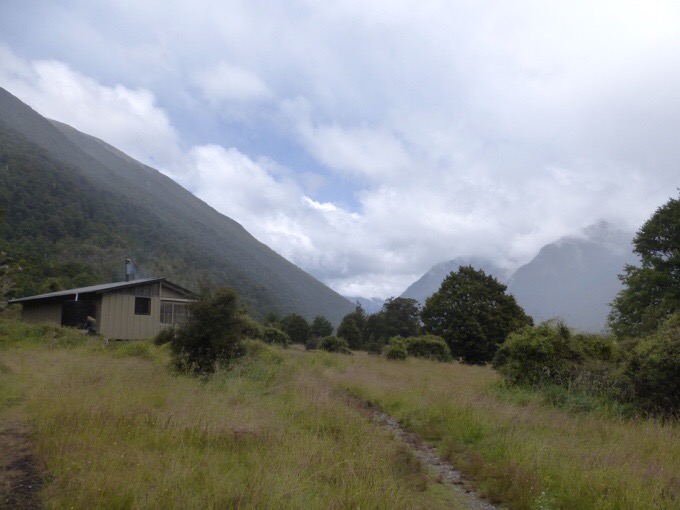 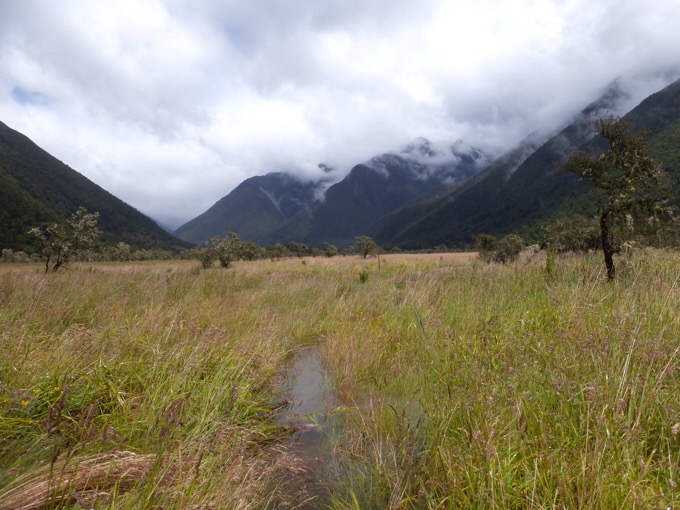 Entering the valley to knee high water in the grass.

Fortunately, none of it was too swift. It was slow going all day not being able to see through the water much of the time and not sure of how deep it would be. Some of it was crotch deep but footing underneath in the grass was fine and I felt stable. One section was completely flooded out and too swift and deep to go into. This is what the trail dead ended into. There is a grassy patch on the left center that has an orange marker indicating the trail is there. Um, no way… 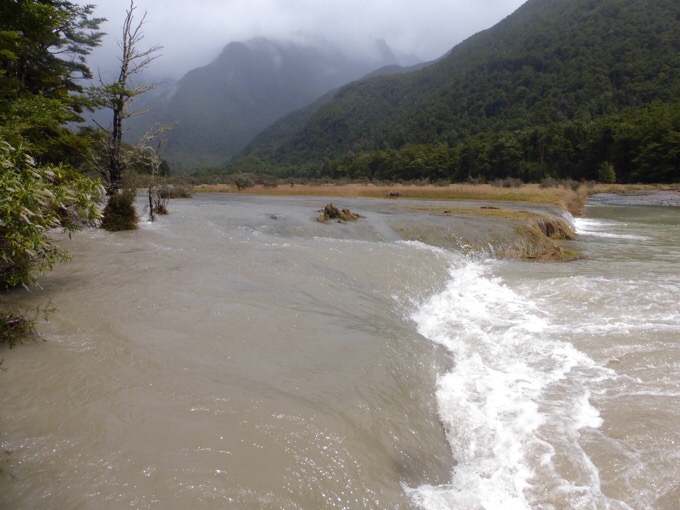 The whole valley where the trail went was flooded. Notice the trail marker on the far left grassy island.

Fortunately, there was a way around it to a more shallow and manageable crossing. I knew there was a decent sized group that had left the lodge a couple hours ahead of me this morning, so I figured that unless I saw them turned around, everything was passable. It was good to know I had so many others ahead of me, and that although I was doing it on my own, I wasn’t the only one doing it. 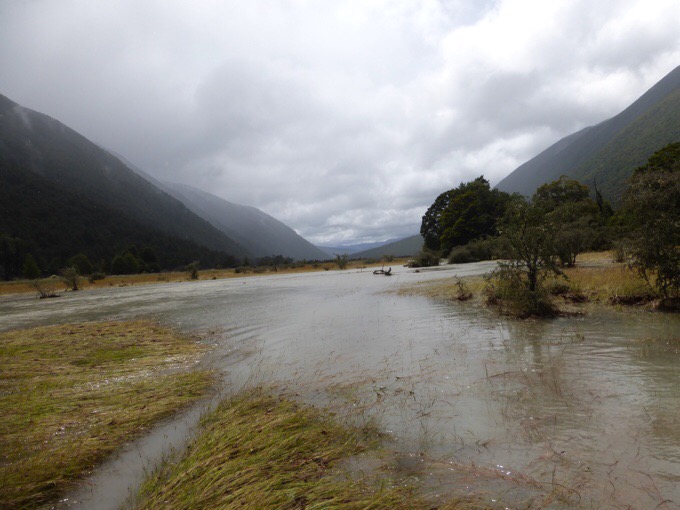 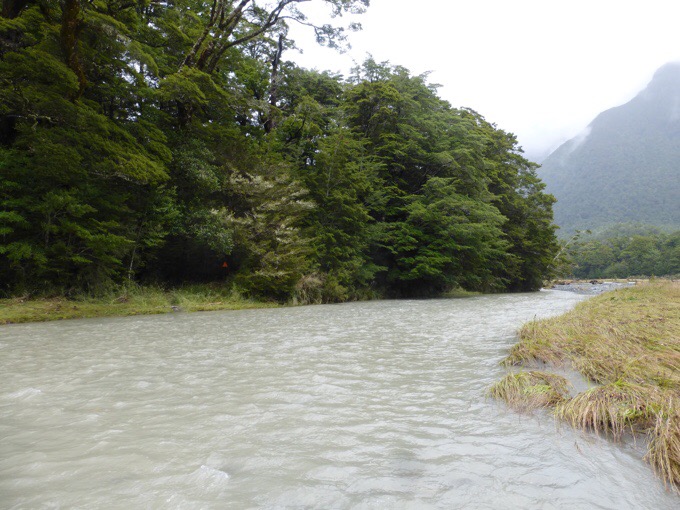 Yep, the orange marker is in the shadow on the other side and I crossed this. 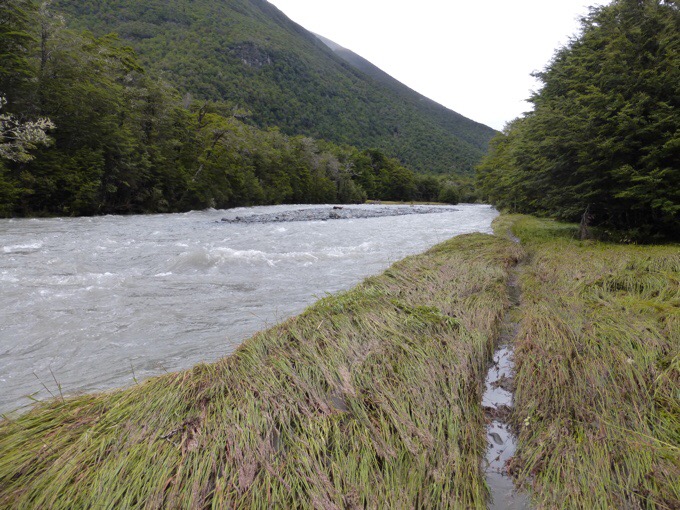 I was glad the rain today was light and on and off. The clouds were high and I was able to see the mountains. This is one of the most scenic parts of the TA, so I’m glad I’m actually getting to see it. It was quite impressive how much water was running off the tops of the mountains. 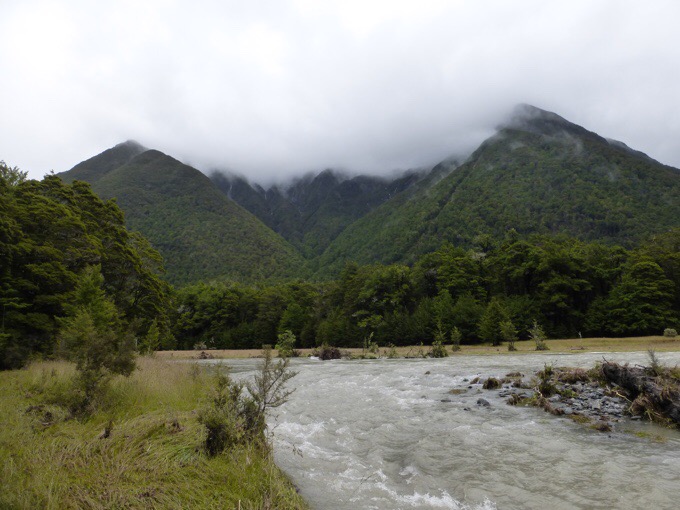 Water running high off the mountains. 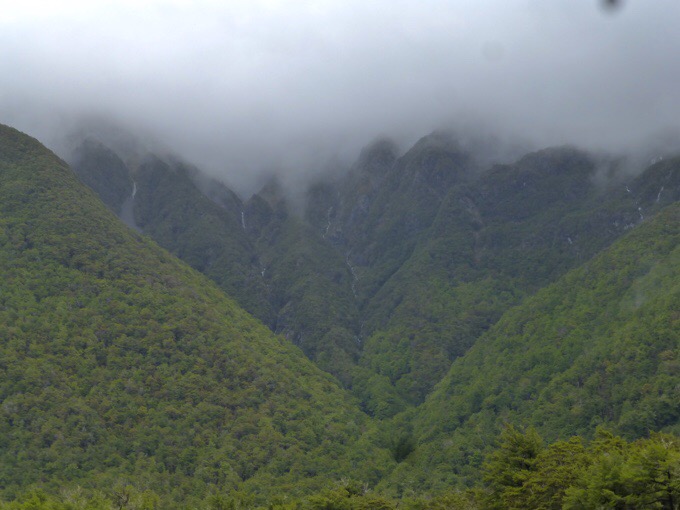 A zoomed in shot of the water.

I was really relieved when the trail returned to the woods and came out of the flooded valley. The trail still had water in it, but it wasn’t the big wide deep stuff that was in the valley. 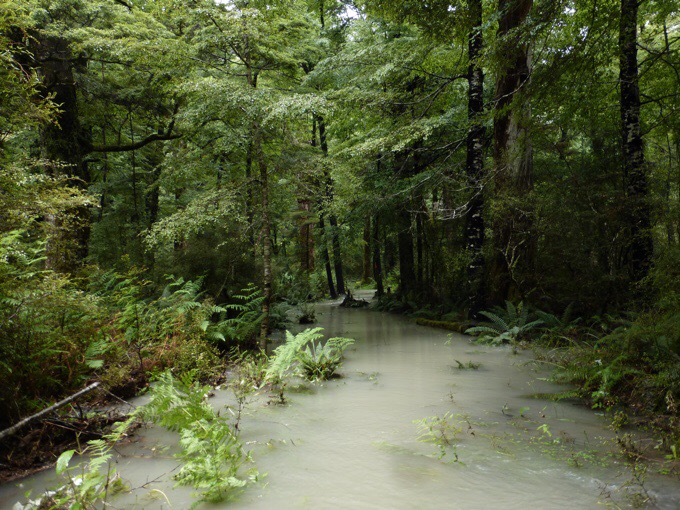 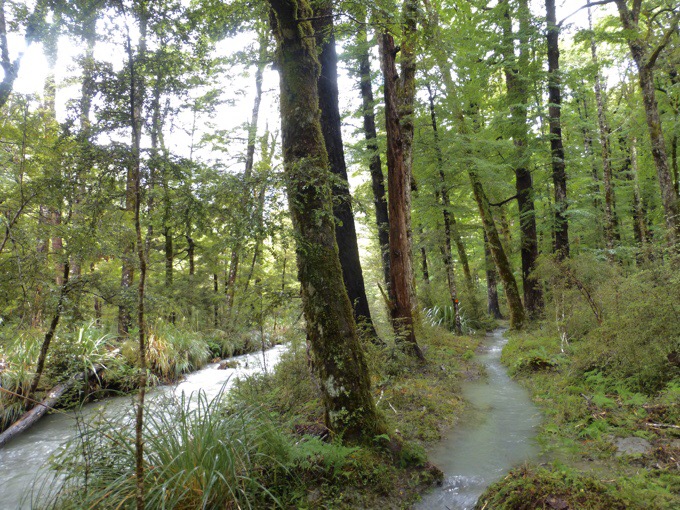 The trail matching the neighboring stream. 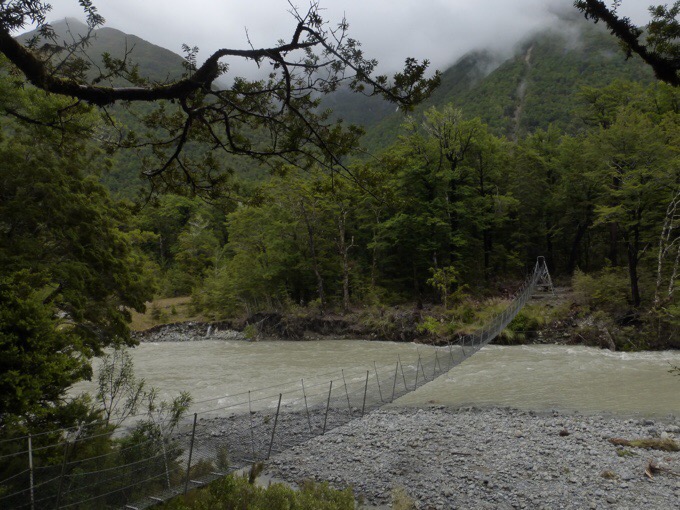 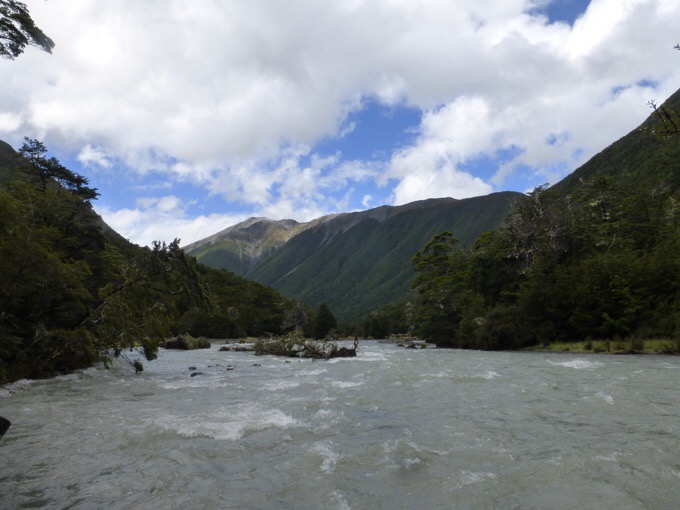 Happy to have mountain views.

I made it to John Tait Hut at 5pm. The view was great! The plan was to go one more hut a couple more hours away, but I decided I’d done enough. 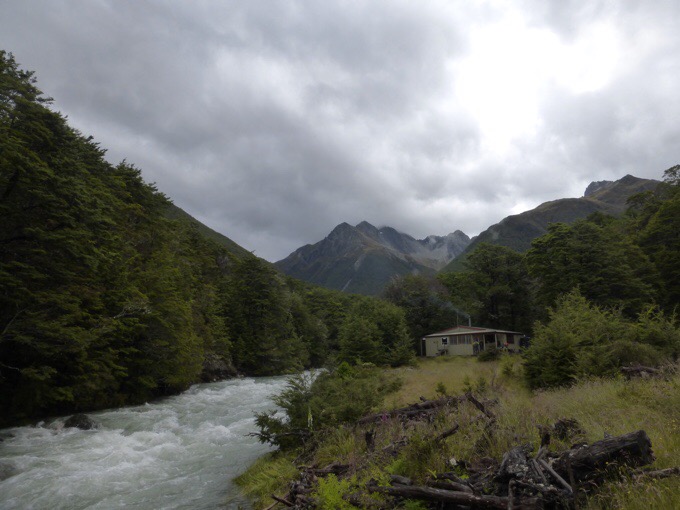 The TA hiker group that left ahead of me was also there, and most decided to stay as well. It seems that we are all on the same plan and have a good window to do this without having to unnecessarily push today and tomorrow. We can do one major pass a day over the next two days and should be over them before the next major rain comes. 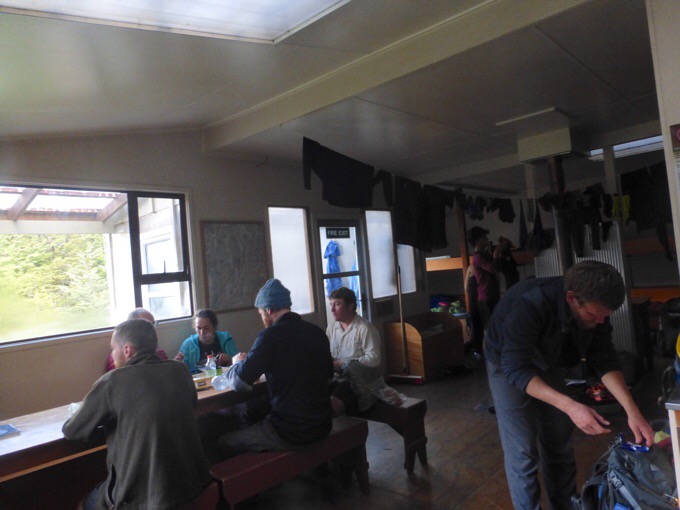 The main worry I have is that after the second pass is a major river crossing. I want to time it to let that thing drain as much as possible before crossing it, but before the next rain comes. It seems that timing will be good for that, but I’m conserving food in preparation to sit it out a couple days if need be to let it drain.

This hut is awesome! The fire was going when I got there and it was super warm and cozy inside. It sleeps 27 and we have 12 people here tonight. Ten TA hikers and two locals. A couple of the hikers I met back in Taumarunui or early in the hike, but the rest are new to me. It’s a lot of people, but they are all a quiet and calm group, so I like the energy. The last couple hours of the night, everyone was quietly reading in their own space. 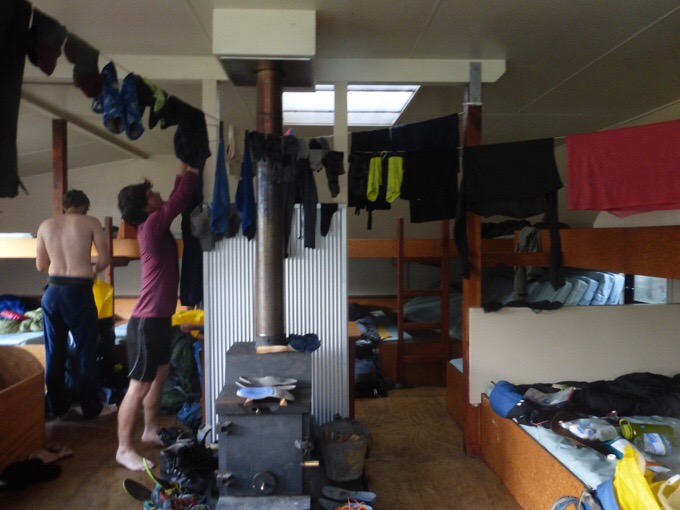 Tomorrow looks to be a great day for one of the most scenic parts of the whole trail. I’m looking forward to it, and with the distances between the huts, it should be a relaxed day to really enjoy it.