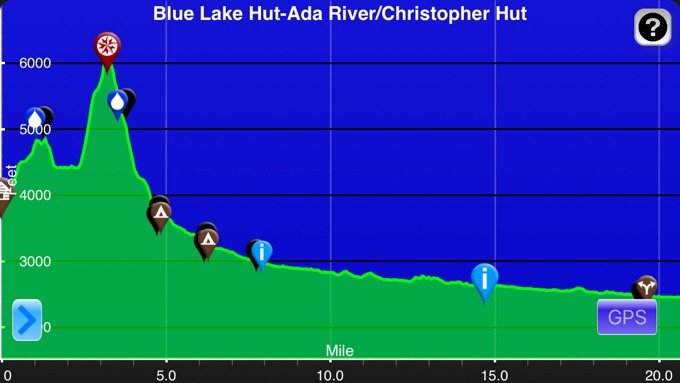 The alarm was set for 4:45am with the hopes of leaving by 5:30am. It was darker than we expected, so Griggs and I waited til 5:45am to have enough light to really see our footing in the tussock. I was so thankful that we had clear skies for going over Waiau Saddle, the second highest point on the TA at 6,135ft/1870m. As we headed up, we got to look down on Blue Lake. Notice the snow lingering up high probably from the recent rains and drop in temps up high. 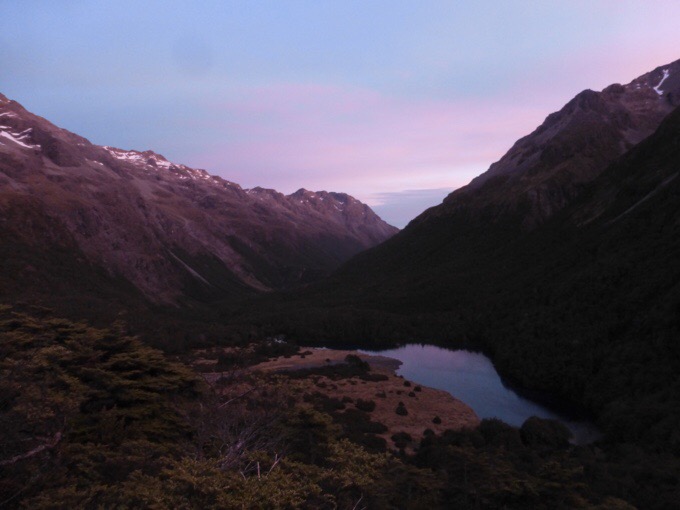 Looking back and down on Blue Lake and Blue Lake Hut. 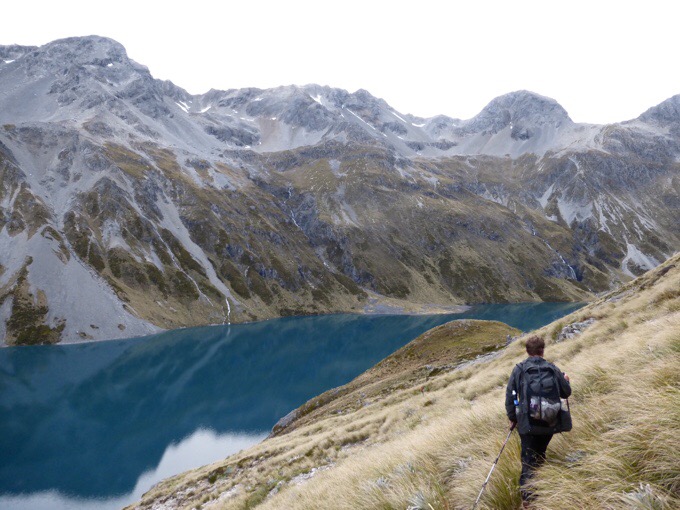 Lake Constance was pretty high and went over where the track seems to go. A couple of times, we had to wade in the lake to get around rock outcroppings. Keep in mind, this was early in the morning and it was just 40F/4.4C. It was really COLD. One of the times, it went up to my belly button. So cold! We just kept moving to stay warm and the climb over the saddle couldn’t come soon enough. 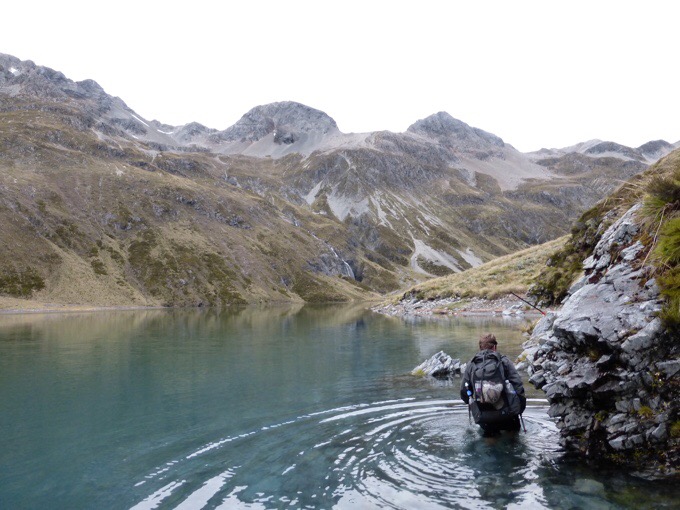 As we approached the climb to Waiau Saddle, it seemed to be a dead end, and we were trying to guess where the climb would take us over. It turned out to be on the far end of the scree on the left. Yes, it was quite a steep and extended climb. We kept a consistent moderate pace as I just wanted to get warmer and feel my feet again. 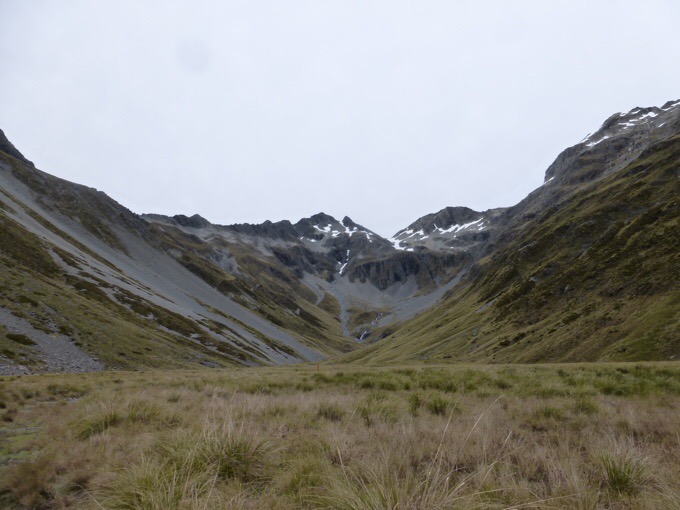 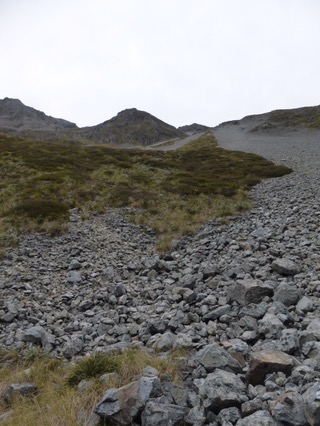 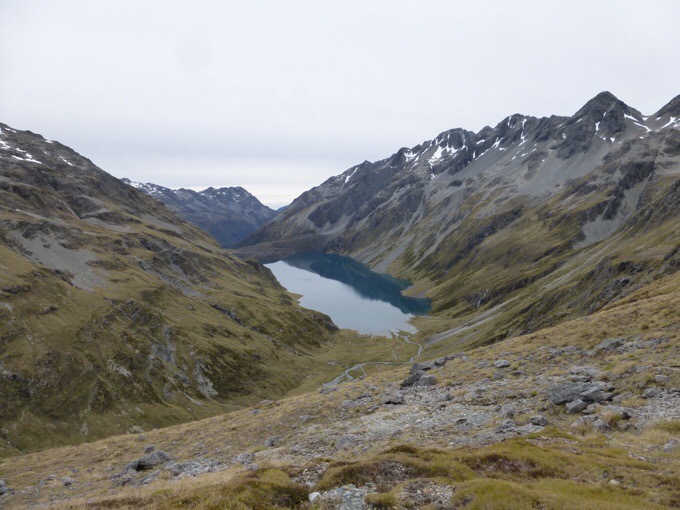 Looking back on what we climbed down on Lake Constance. 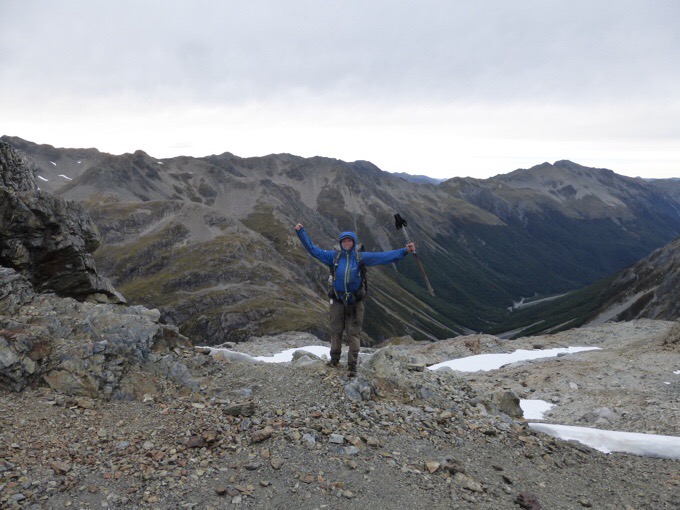 Made it to the top of the climb! Yes, my pants are still wet from the wade in the lake. Brrr. 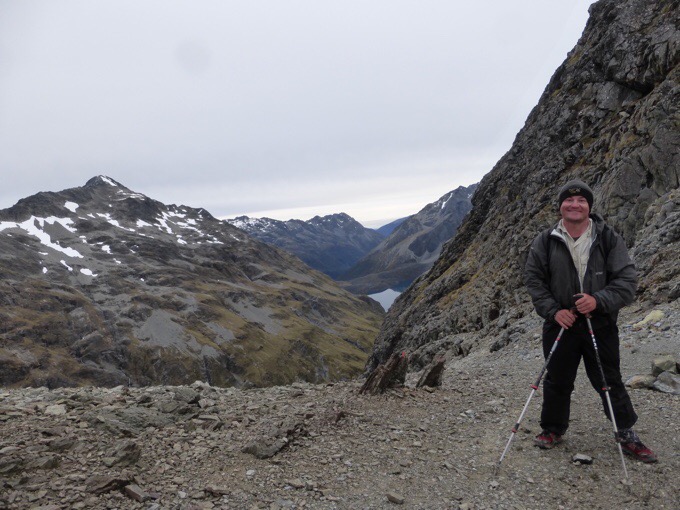 Griggs with the other view of the saddle.

The way off the saddle is known as more of short scramble up top. It was just a brief spot of climbing down. From what we’d heard, we’d expected a lot worse, and it was quicker than expected. I wouldn’t want to do it in poor weather though. 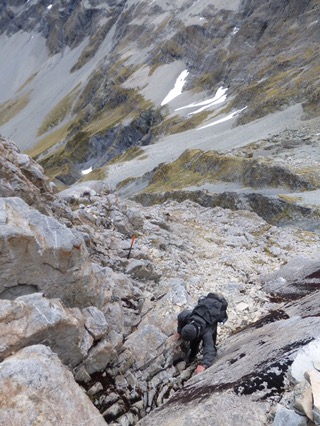 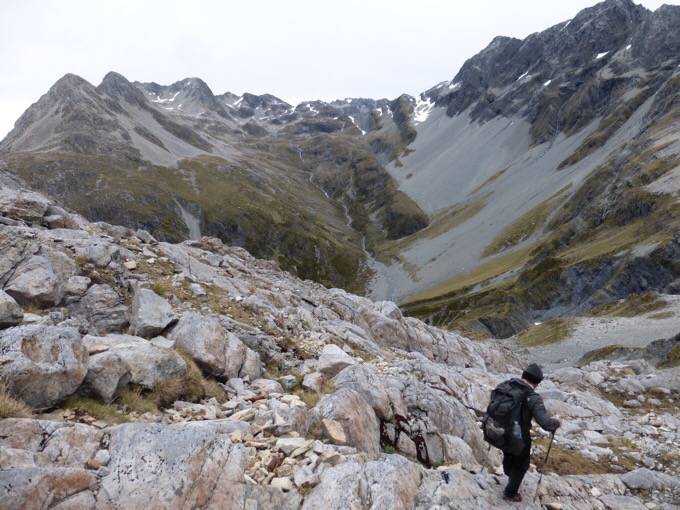 As we went down, we started to hit the water that funnels into the Waiau River Valley. Yes, it was still cold, and my feet were numb. We knew the further down we went, the worse the crossings would be. I was thankful for each one we got through easily. 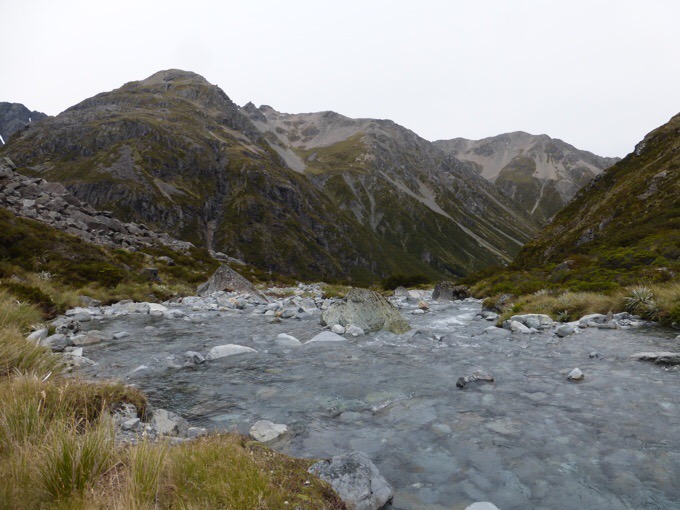 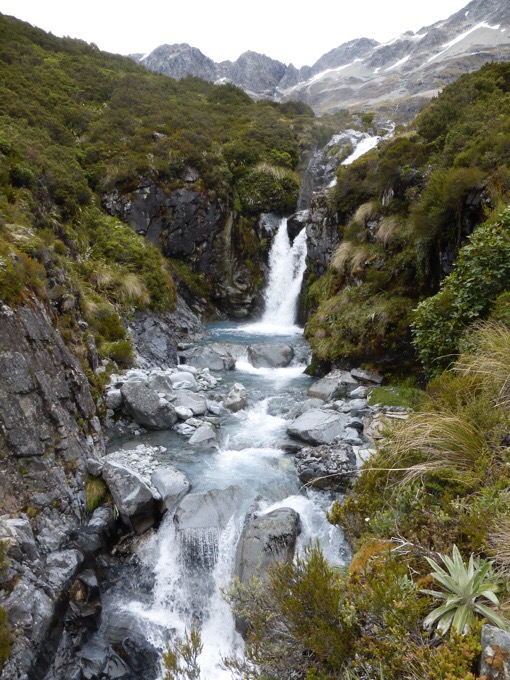 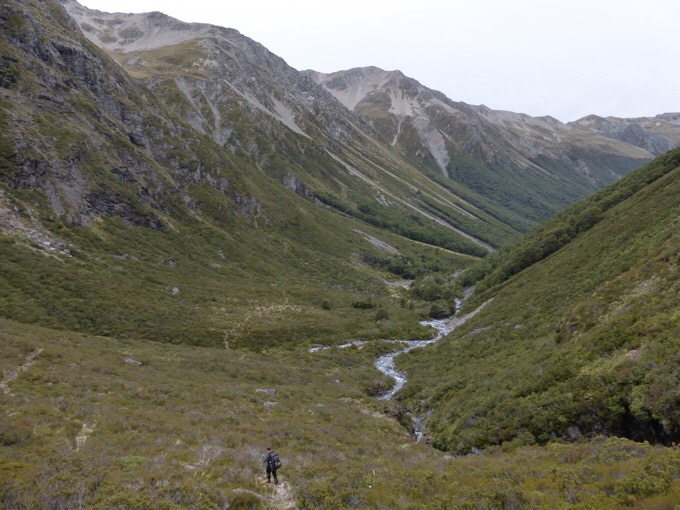 The upper one I was most worried about and had hear of was one of the early crossings of the Waiau River. When we got to it, we were happy to see that it was swift but shallow, so not a problem. I could see it easily being a formidable crossing just last night or with just a bit more rain. 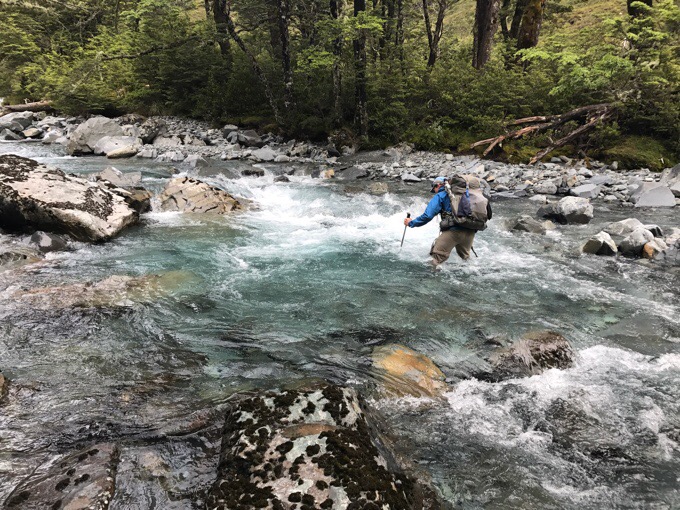 Crossing the Upper Fork of the Waiau River. 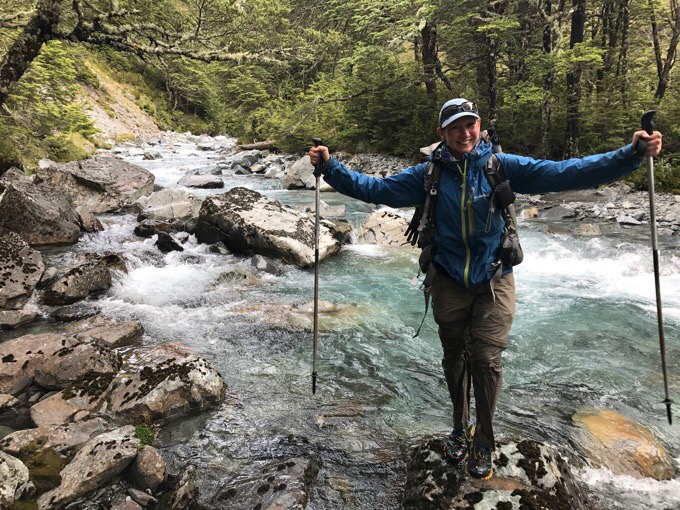 Cold wet pants, but done, yay! Griggs had rain pants on and they got torn open in the brush up top, so there was no winning on that one.

For the next hour or so, it was some sidling along the river with varying degrees of rocky terrain. Not as smooth going as we had hoped. We wanted to keep a good pace because the rain was on its way and we knew we had the Ada River to ford at the end of the day. 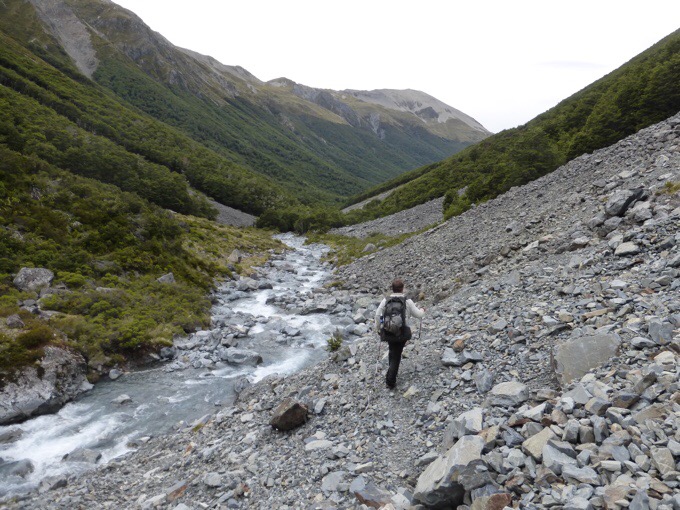 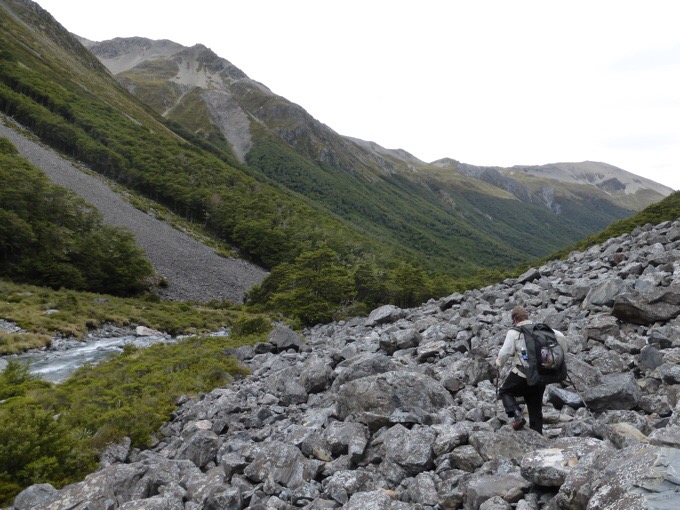 We made it to the Caroline Bivy and campsite for lunch. I think it was 12:30pm when we got there. It’s a great camping spot, but pretty grungy inside. We ate quick with just about a 30min break knowing we wanted to get as far as we could before the rain started to fill the upcoming crossings still ahead. 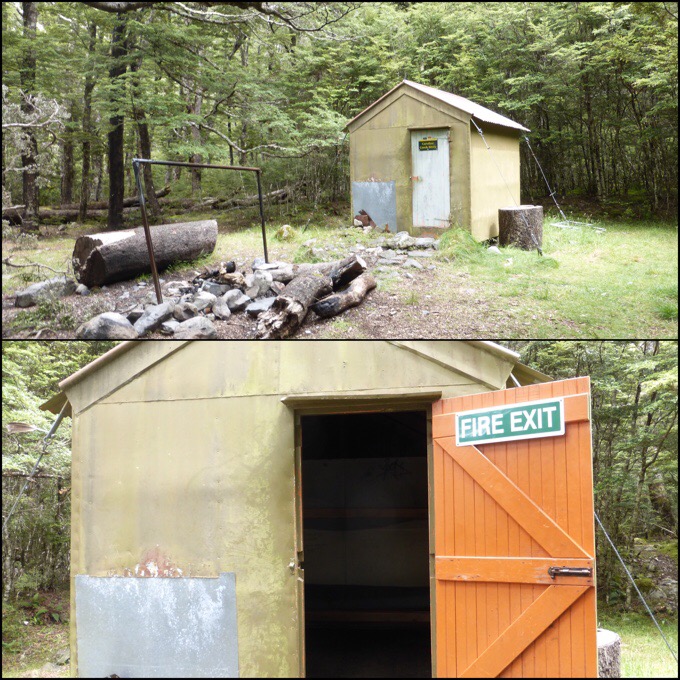 I would think many that left with us this morning were possibly aiming to end at the Caroline Bivy area today thinking they had passed the worst crossing. What we didn’t expect was that the worst one for us before Ada River was just a little while after Caroline Bivy. If you are ever thinking of camping there before rain, I don’t recommend it. Push on past this next crossing if you can. It was a swift one. 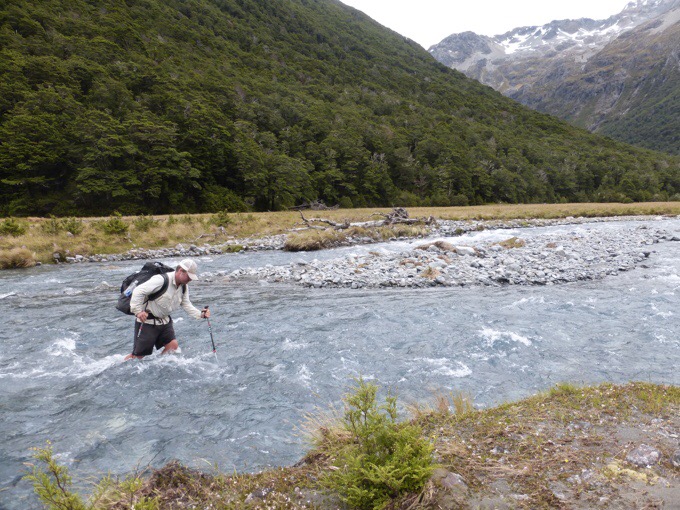 We were relieved that the track finally changed to a four wheel drive road. We were able to push a faster pace and make up for the slower terrain and time in crossings earlier in the day. As we were walking, we were surprised to see actual vehicles on the road. It turns out that there was a mountain bike race somewhere around here in the morning and this crew had special permission to drive through for that purpose. One of them offered to take us through one of deeper dips. We were just beginning to dry out a bit and were so tired of getting wet and cold that we took him up on the offer to avoid one deep one. We joked that we broke our thru-hike by getting a hitch, ha! These vehicles out here are awesome and they even have a snorkel that sticks up out of the top to drain water. So surreal to go through deep water in a car. 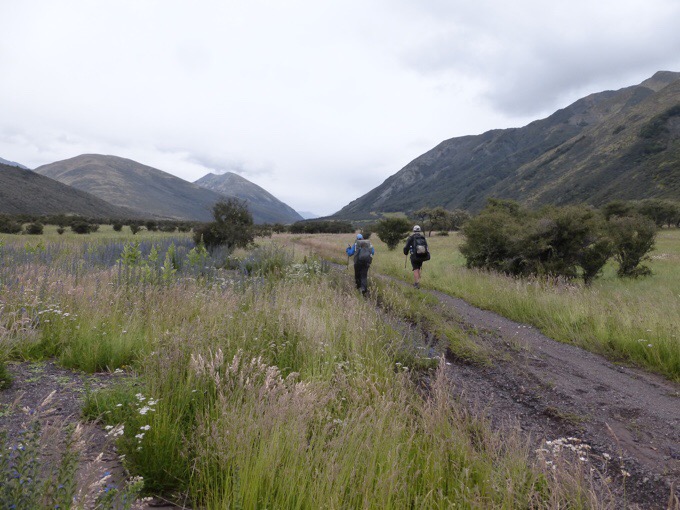 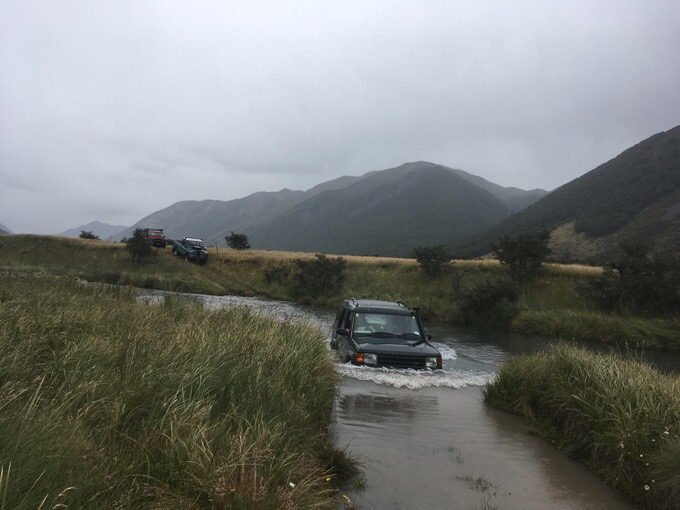 We got a hitch across this one!

The rain started coming down at 2:30pm, thankfully a couple hours later than we expected. It was like a race against time to get to the Ada River as soon as we could. We ran into our first hiker of the day a couple kilometers before the crossing. A tall guy that said it was super swift and difficult for him and went up to his waist almost. Oh crap, not good for both of us who are short. When we got to the river, we couldn’t see the bottom and it was running fast and calm. That meant it was deep…dang! We spent a good 45mins walking up and down the river as the rain came down looking for possible spots to cross. I think Griggs went in up to halfway across at least four times and each time he scared me as the water was pushing high up to his waist at times and he was fighting the power of it. I knew there was no way I could get across. He definitely gets an A for effort on that! We were so close to getting through this. Just 20m were separating us from virtual freedom. All we knew was that heavy rain was forecasted for the next 12-24hrs, and if we didn’t cross tonight, it would most likely not happen for at least a couple days. On our side of the crossing was a homestead and we saw vehicles driving into it. It was after 5pm, so we decided to go over there and see if they had any way of helping with our predicament. 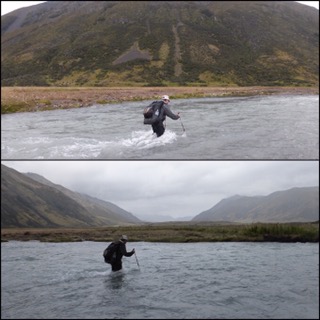 Griggs attempting to cross the Ada River. It was powerful.

The men there said that they were also stuck in and that their cars could not cross the Ada. There were also men on horses staying there in the same situation. They said that this morning, a group of hikers (who we thought was the Felix crew) came through and also couldn’t cross. The men were coincidentally driving out the opposite direction over the mountains somehow to Hanmer Springs (our next town), and gave those hikers a ride out. We knew there was a hut (Christopher Hut) 5km/3mi up river on the other side. There was a chance that up there, the crossing would be lower, and they recommended that. There was a trail through the grass that led there. We convinced one of the guys to give us a ride as far as he could for 3km of that walk since time was not in our favor and the rain was coming down. Willy was awesome and even felt bad that he only had gum to give us when we got out. 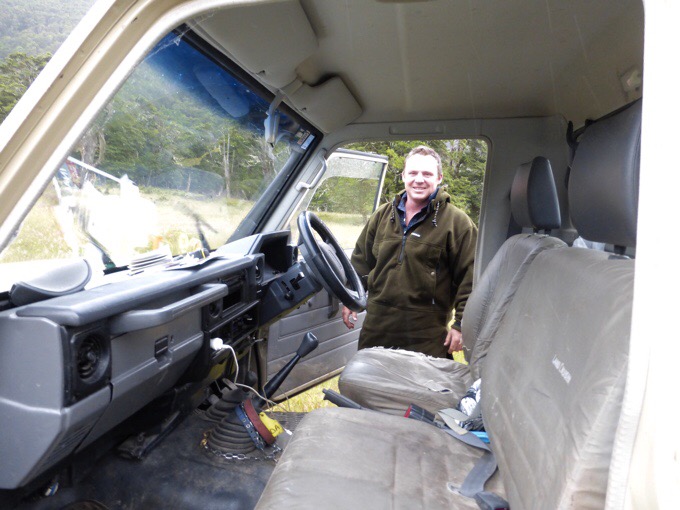 Thanks to Willy for the ride up river in the rain!

We walked a couple kilometers along the river with the Christopher Hut across the way in our sights. It had smoke rising out of it and would be a warm safe haven if we could get to it! When we got up there, the river was indeed shallower, whew! Griggs crossed in a spot I wasn’t confident in, so I went even further upstream just across from Christopher Hut where it split into more branches I could more easily cross. We made it! 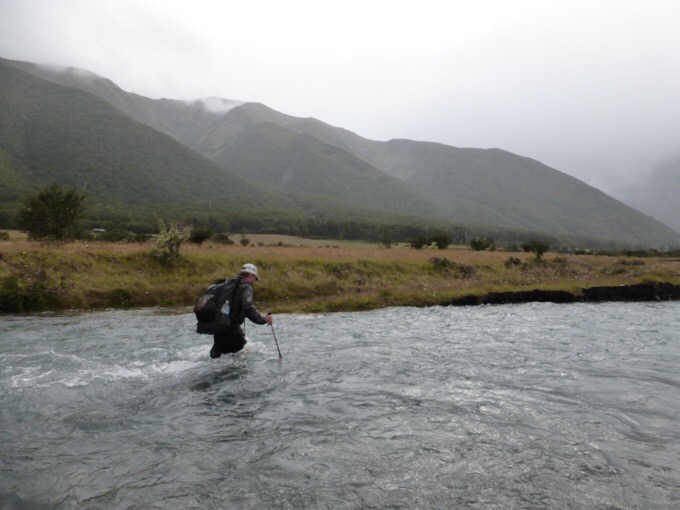 I was completely drained as it was about 6:30pm and we’d been going for almost 13hrs straight through. The wet and cold weather drains me more than other weather and I was ready to just crash. We walked into the hut to find two women doing the St James Walkway loop that stays on that side of the river, and a northbound TA couple from France. 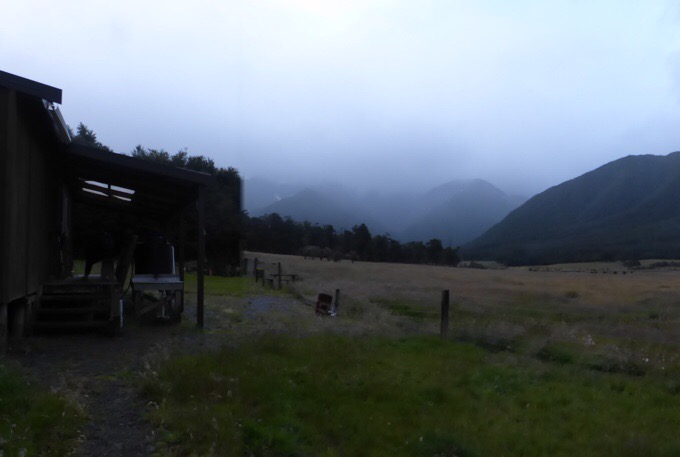 Christopher Hut. We made it!

The hut was amazing and sooo warm! Everything was even able to hang dry. The TA couple let us know that they did find a place to cross the Ada River halfway between the TA crossing and the Christopher Hut that was quite wide and shallow. We now have a bonus 5km walk to get back to the TA tomorrow, but being in this hut is worth it. We would have had at least another 9km to get to the next hut along the TA had we crossed, so we happily took the hit and will do the extra kilometers tomorrow just thankful that we are on the safe side of the river. The French couple had decided to stay at Christopher Hut to let the rain fall and make sure they don’t get blocked in tomorrow morning. If the river can be forded in the morning, they will give it a shot to head into the section. They told us that they skipped our upcoming section after Hanmer Springs because of the high river crossings involved. I looked at Why Not’s journal from last year, and she took 4.5 days off to wait for that river to drop and still had to road walk around it. Great, the river angst is still not over and we have more to look forward to. At least this one we made it through! 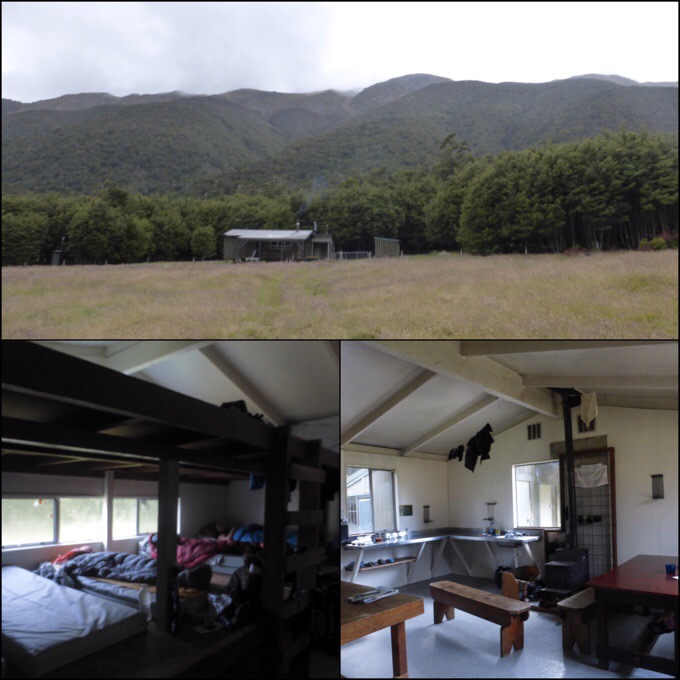