Day 80: The Long Soggy Slog Out 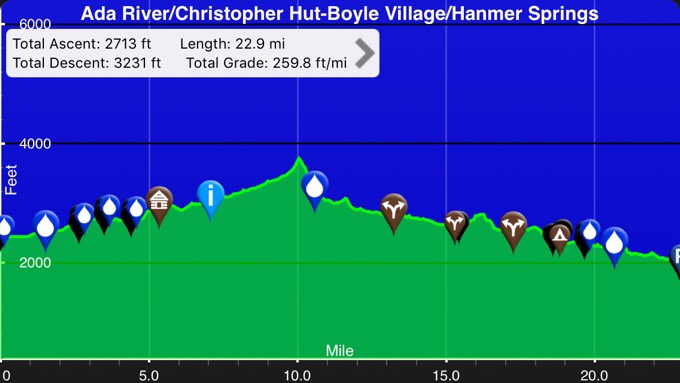 The rain did fall overnight, but not as much as predicted. There were periods of heavy rain, but thankfully when we got up, the rain had stopped. I was pretty drained by this cold wet leg of pushing, but we had a big day ahead and got going at 6:20am. The view was great with hope that the clouds might actually lift. 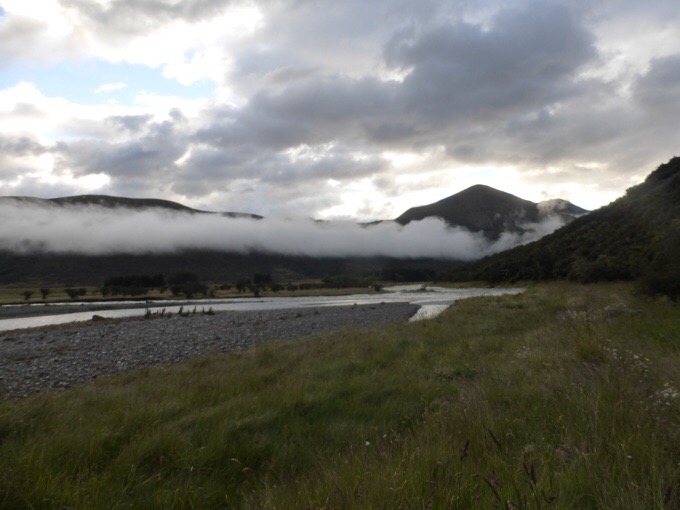 Our original plan had us at Anne Hut last night, but since we had to detour up river and off the TA 5km to Christopher Hut, we were still 12km from Anne Hut. Our hoped rainy day slog out of 19mi/30km was now going to be 26mi/42km. The first half of the day was pretty much walking through tall wet grass and soggy cold wet ground. It was warmer than it’s been at 50F/10C, so my feet were not numb at least. One problem though. This morning when I put on my shoe, the top of my right foot was quite tender like I’d laced my shoe too tight. I loosened as well as I could and hoped it would pass as the day went on. I’m guessing that with numb feet, I didn’t notice it yesterday on the descent and may have had my shoe too tight and caused irritation. 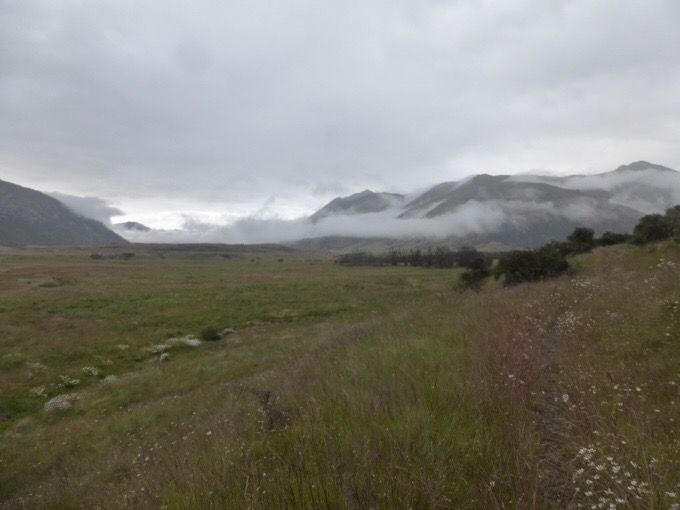 The rain started not long after we got going and continued steadily all day. Man, I think the umbrella wins my award for most valuable piece of gear this year for how much I’ve used it this year! It totally enhanced my day to have my top half dry. 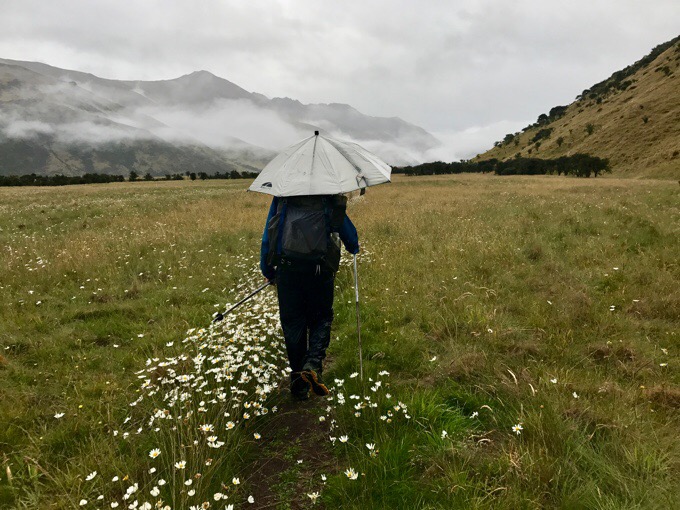 There really isn’t much to say about today. It was really uneventful and felt like an eternity walking from valley to valley in tall never ending grass fields. I just kept thinking of getting to town and taking a zero somewhere warm and dry. I need a break. I’m glad to have made it through the last two sections seeing all the great views in prime times, but it did require quite a bit of pushing and that is tiring. This is where thru-hikes are a bummer. There just isn’t flexibility to hit everything perfectly and you have to make the most of what’s in front of you. Had I hesitated at all I could have found myself unluckily in a hut for multiple days only to find out I still wasn’t getting a view or able to cross a river. Griggs and I took the gamble and it paid off this time. If I have to have a socked in foggy day, this valley hiking is a great one for it. 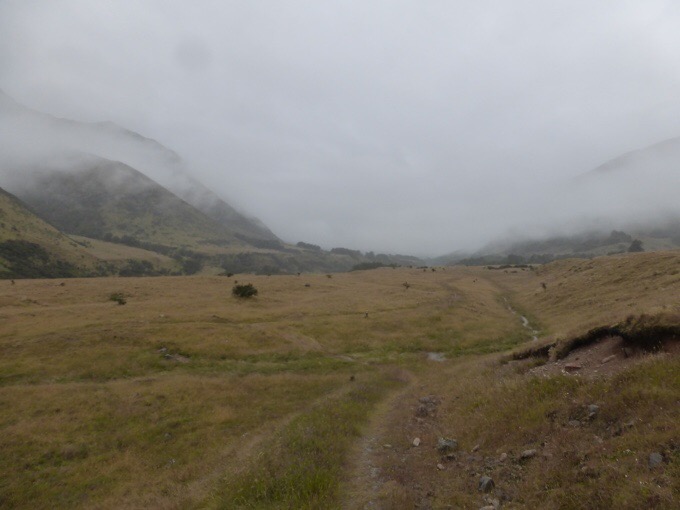 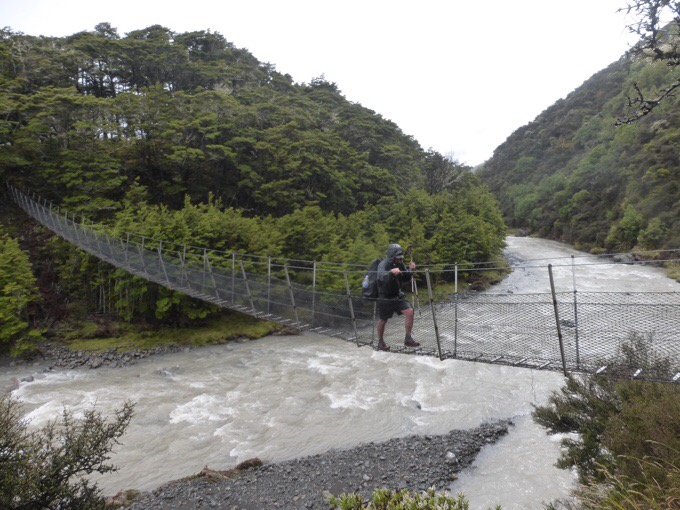 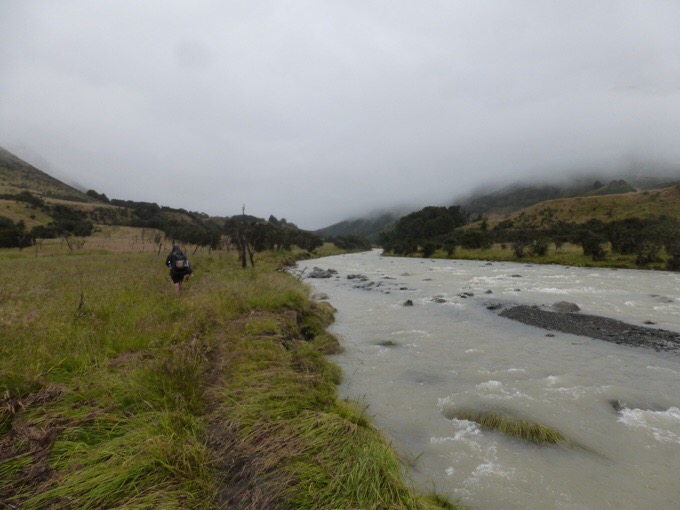 We made it to Anne Hut around 9:30am. That was our intended stopping point for last night had we been able to cross the Ada River. There was one other southbounder there that had run into the French couple yesterday afternoon that we hutted with. They showed him where to ford, and he was early enough to make the hut. A couple days ago, he saw this front coming and pushed both passes in one day to make it through. Now he’s just happy to be on the safe side and he’s zeroing in the hut and going to do some half days to town. 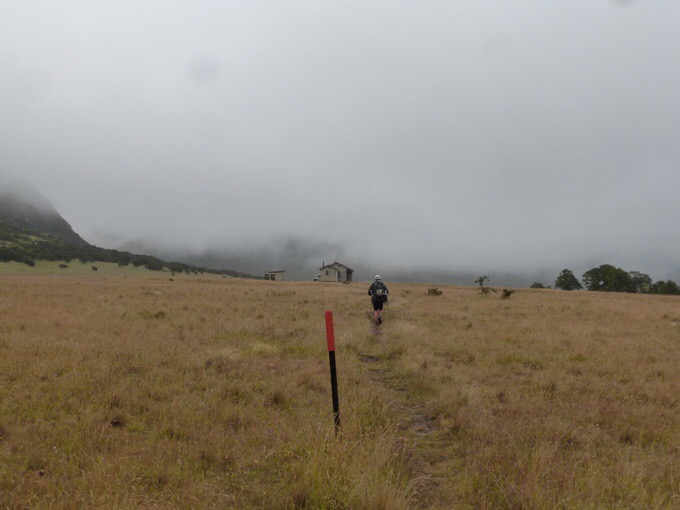 A few hours later, we arrived at the three bunk Rokeby hut for lunch. The rain was coming down pretty steadily, so we were thankful to have a dry place to eat no matter how grimey it was. No one has slept in there in weeks, ha! I ate two lunches I was so hungry. I think the cold weather is making me want to eat more, and now not stressed about crossings, I think I was more relaxed and actually hungry. 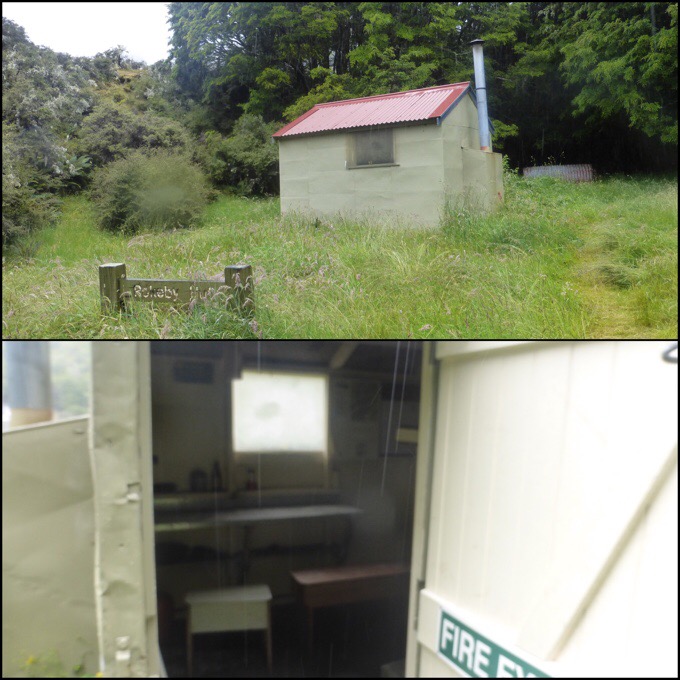 We got to a bridge that was a reality check of how high the flood was just three days ago. Look at this! The water was so high it pushed logs up onto this bridge! 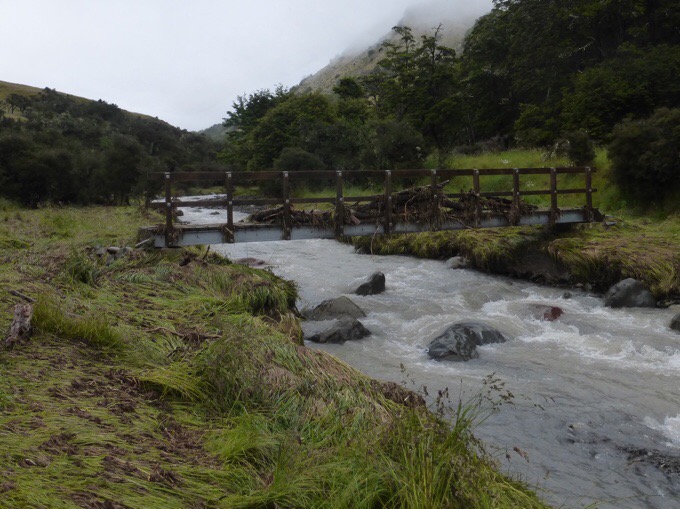 The rest of the way was just a soggy slog out in general downhill but many small ups and downs. Some trail was washed out, but looked older. Maybe some new stuff, but there were little climbs or ways around each time. The top of my foot was not liking the terrain and each step was painful and made the afternoon feel like an eternity. 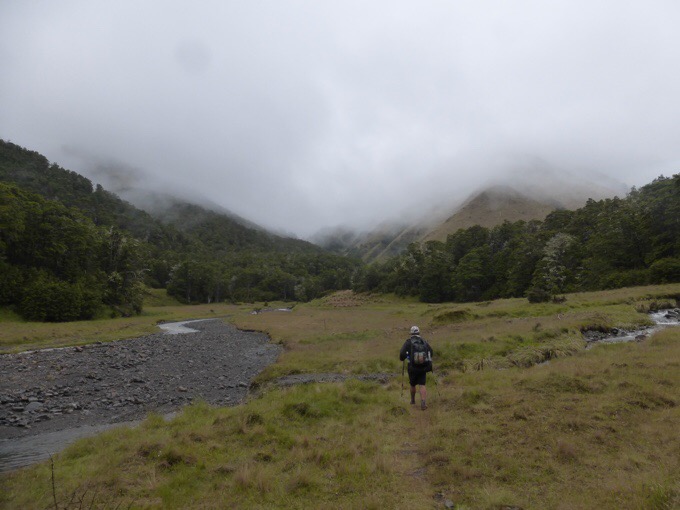 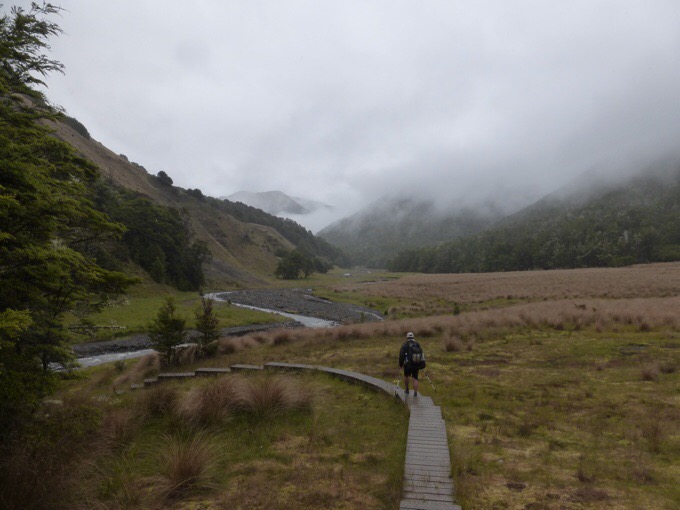 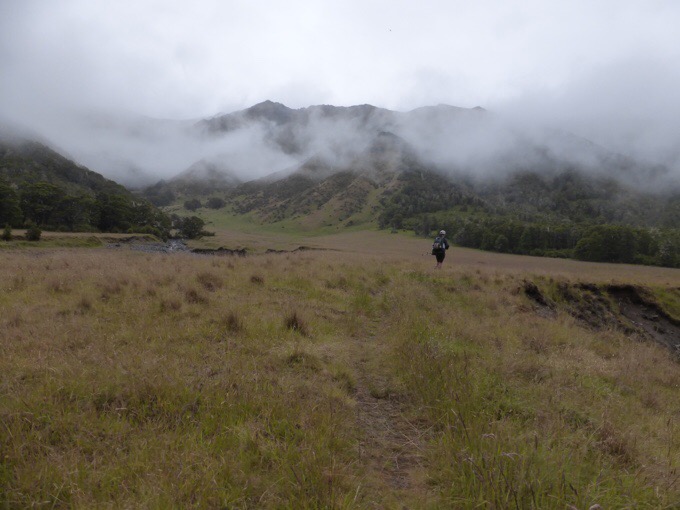 It got more wooded the last couple of hours with more puddles, mud, rocks, and roots. Some of it was good to cruise on and some of it was slow and it felt like we might never get there. 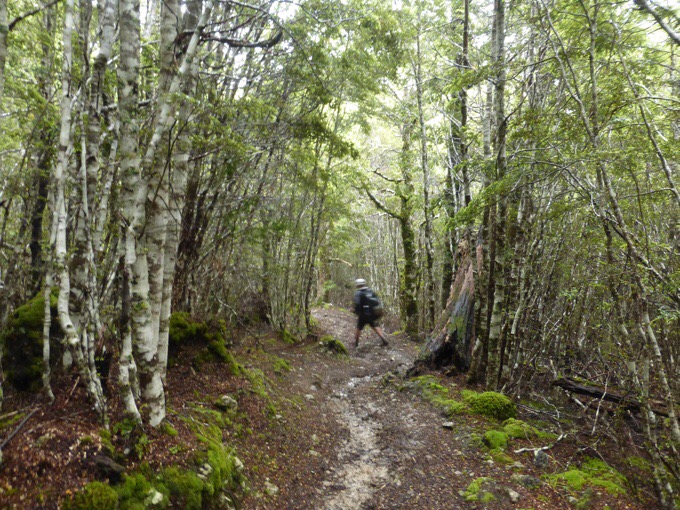 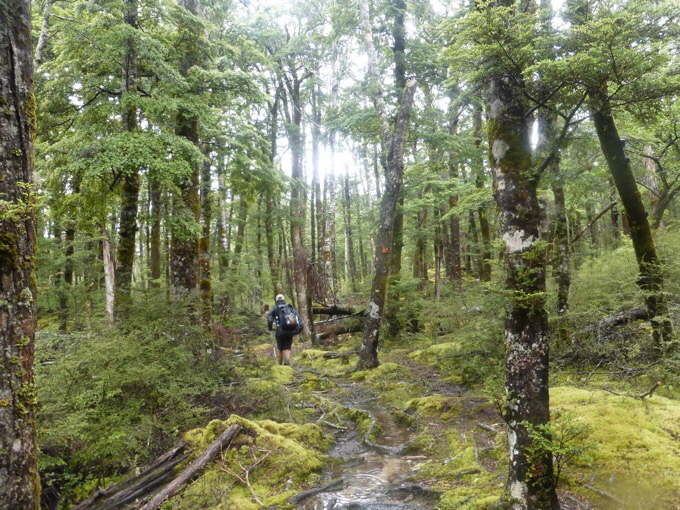 We thought this was hilarious. Just a random footbridge in a completely soaked marsh.

When we hit the road, we didn’t have cell service and weren’t sure which way the 34mi/55km hitch was. I heard it could be difficult, but that there is more traffic now that cars have been rerouted to this road due to the earthquake a couple months ago. I had a sign that said Hanmer Springs that I carried the whole leg knowing it may help. There is an option to send a box to the outdoor center right by the trail, but I knew I’d want to go into town. I just didn’t know how right I’d be about that! We are totally going to zero! We started hitching at 5:10pm. When we hit the road, Griggs had an offline map he checked that seemed to indicate that we wanted to head to the right. We stood there for 35mins before a car pulled over to tell us we were hitching the wrong direction. Classic! At least someone was nice enough to finally tell us! There was more traffic going that way, and wouldn’t you know it, 8mins later we got a hitch! It was a nice couple from Minnesota that was rerouted because the main road at Arthur’s Pass is closed due to a landslide from the flood. Hey, the weather somehow benefited us! Hikers are actually referring to it as the “weather bomb” which I find to be a fun term. 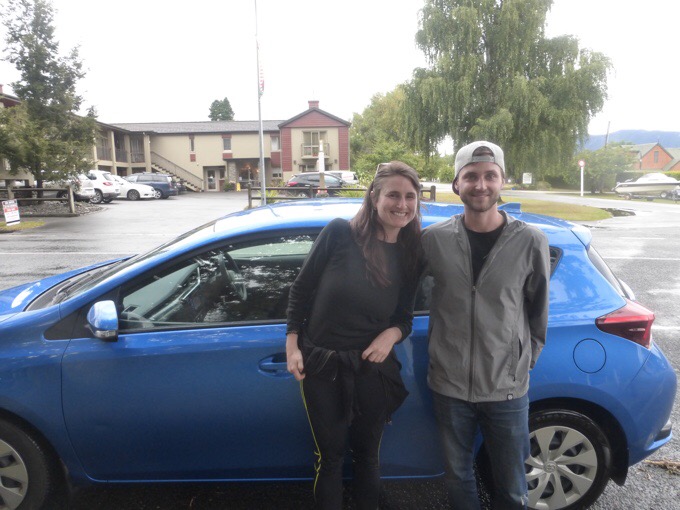 Our hitch to Hanmer Springs!

We finally got signal, and as expected for late on a Sunday night, the two cheaper hostels were fully booked. At this point, the two of us really wanted to be in our own space and rest for our zero. We treated ourselves to the Tussock Peak Motor Lodge. Free fast wifi, real beds, and a nice spacious quiet room. Probably not the best deal in town, but we were at the point of just wanting to land somewhere. We ordered in some Asian food and they even offered to do our laundry for us even though it was past the time that they allow the machines to run. I stayed up till 1am catching up on emails and on where everyone else is at. I’ll do an update on all that tomorrow on the zero. One problem, when I finally took off my shoe, I had a decent amount of swelling on the top of my foot. Dang it! I’m icing it and hoping this is a minor thing that I can rest for a day. I think I irritated the tendon with the frozen foot and a tight shoe two days ago without knowing it. Hoping it heals quick and doesn’t become a real problem. For now, so happy to be warm and dry! 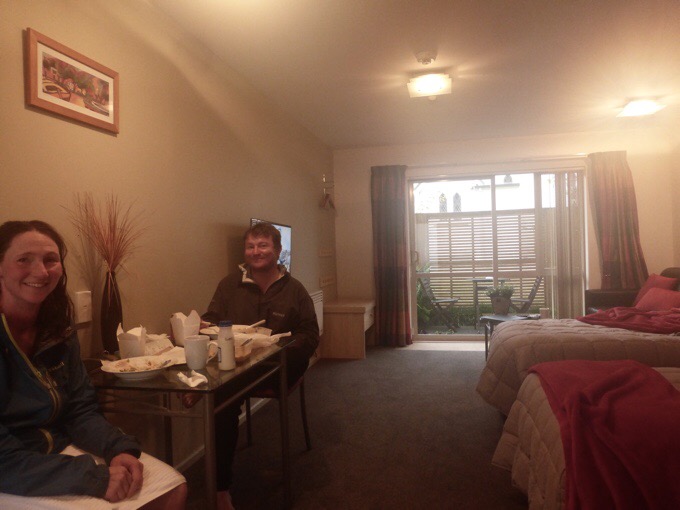