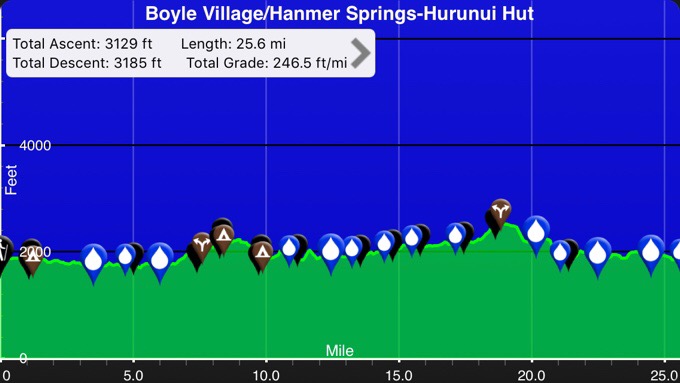 We were up early to catch the shuttle back to trail. We could have hitched the 34mi/55km back, but it may have taken a couple hours or more to do that with the little traffic headed that direction. We knew today was a good weather day, and we wanted to take advantage of that to get as far as we could, so we decided to pay for the shuttle back to trail. It was $10NZ/$7.50US each to get a ride from our hotel to the shuttle stop. Then it was another $20NZ/$15US each for the shuttle to where we left off the TA at Boyle Village. Some people send resupply boxes to Boyle Village to avoid having to go into Hanmer Springs, so I just considered it a wash that I spent the money on the shuttle instead of the shipment of a resupply box. We were hiking by 8am, and were happy to be getting an early start on a rare nice day.

Right off the bat, there is a section of trail that has a crossing of the Boyle River. There is an alternate to walk the paralleling highway road for 5.5mi/9km if it is too high to ford. It was a 1km hike down to the river, so we decided to try and get an idea of how high the rivers are now that it has been about 30hrs since it last rained. Griggs gave it a try, and it was way too deep. Not even halfway across, it was deeper than the height of his hiking pole. We looked a bit upstream to cross elsewhere and accepted that we’d have to walk the road. 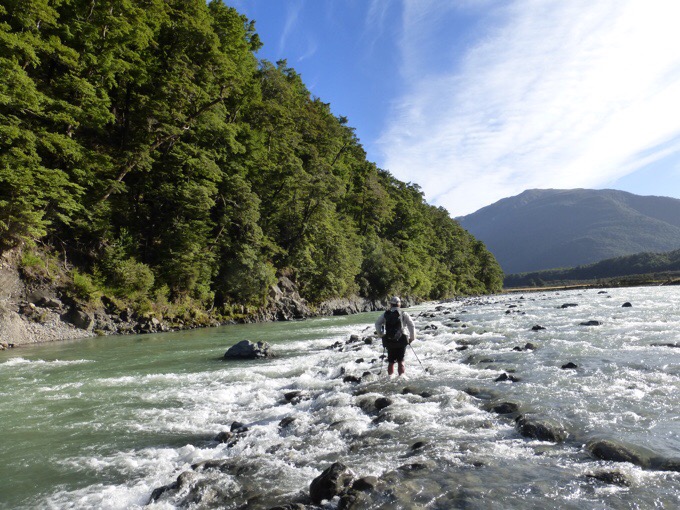 Picturesque, but not fordable.

We walked the 1km back and were happy to at least have tried. The highway is just parallel to where the actual track goes, so we were looking down on it the whole time, and I didn’t feel like we missed out on anything. I’m very happy there is an alternate option at least. 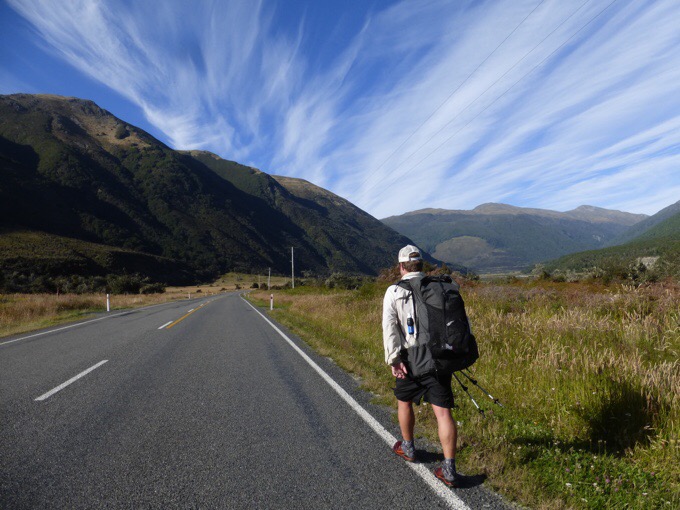 I do have to say that my frustration level is very high lately with this trail. My main thing is that I wish I could just walk. There are constantly logistics and factors on this trail (especially lately) that seem to make it difficult to just walk and throw up a tent wherever you end. It’s like there’s always a strategic move to make and your mind is constantly running through the options and how it positions you given the weather, huts, river crossings, and exposed high passes. I felt like a toddler wanting to throw a fit out of frustration this morning when we walked the extra kilometer to the river in wet grass to then walk back and walk a road with little shoulder that we drove down twice in a car hitching to Hanmer Springs and back. It was not that specific minor task that deserves this reaction, but it felt more like the straw that broke the camel’s back after the last week or so of seemingly constant obstacles and a feeling of resistance. 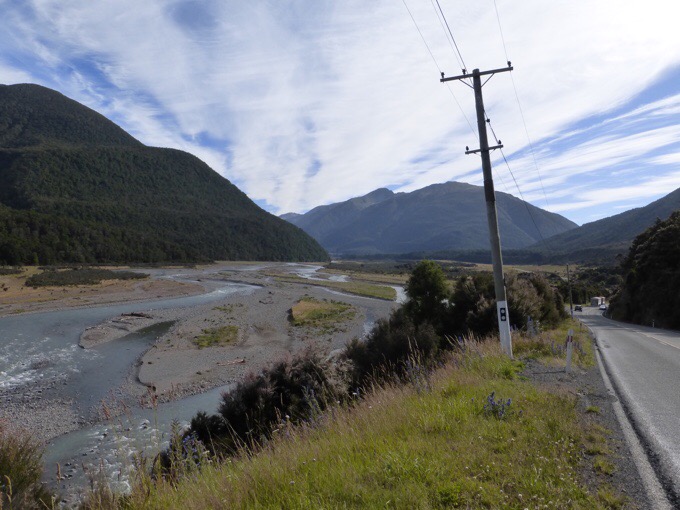 Looking down on where the track runs. 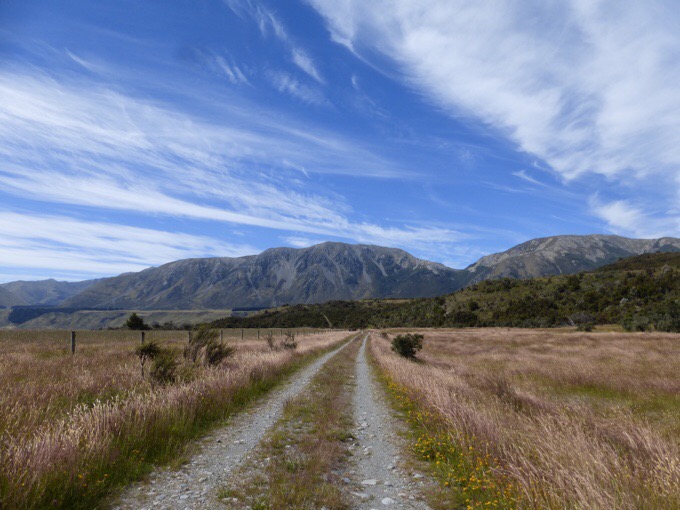 Connecting back to the track.

When we rejoined the trail, it was finally smooth sailing with valley cruising and nice forest walking the rest of the day. I seriously checked to make sure we were still on the TA because it was so smooth and enjoyable. I really needed this to boost my morale! 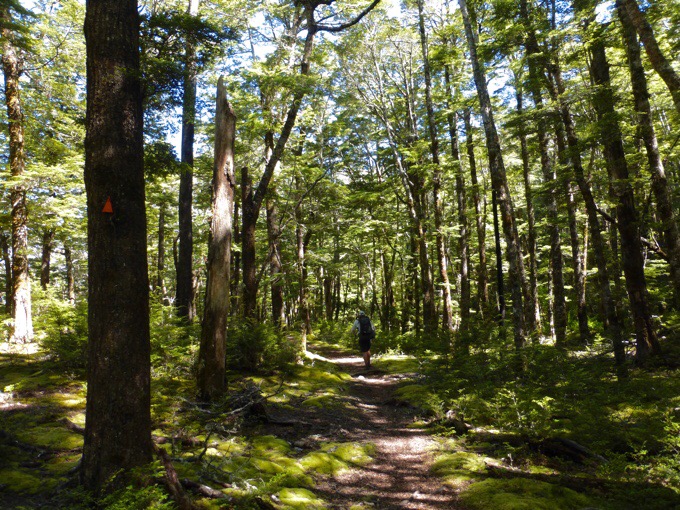 Many seem to reach this level of frustration around here. We just want to walk, but there is almost constant resistance both literally and figuratively. Lately, it’s been all the rain and the swollen rivers to contend with. It seems it’s always something, and you can’t just walk. Today, we finally got to walk! 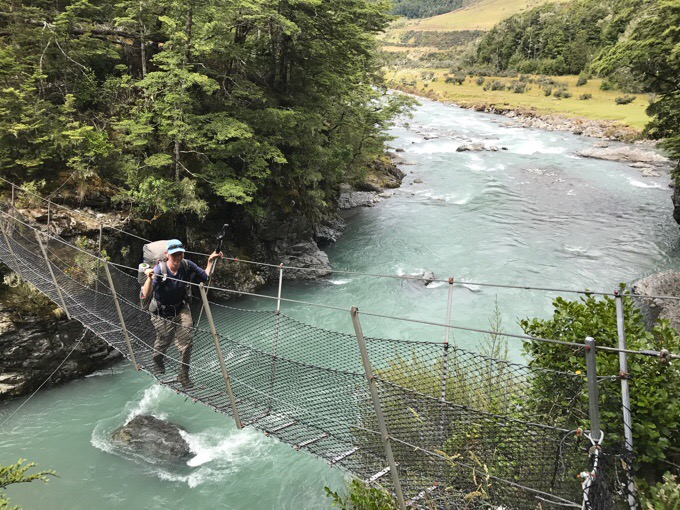 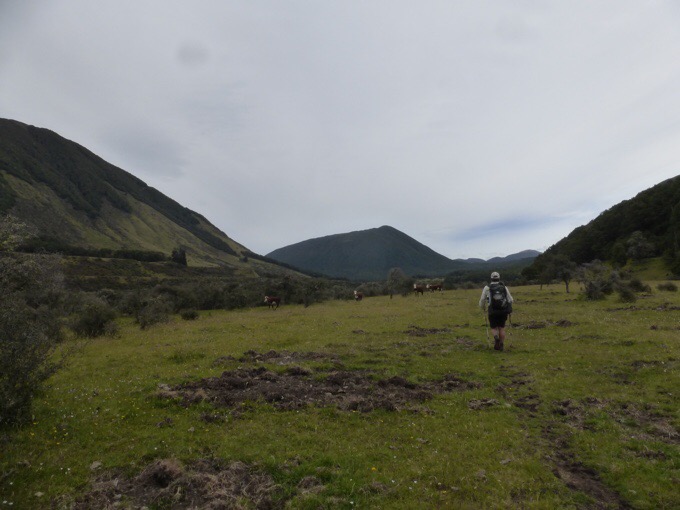 We knew rain was on the way overnight tonight and the first half of tomorrow, so we decided to walk a bit longer today to land at a hut and get those miles done today in good weather instead of tomorrow in crummy weather. Had there been no rain coming, we would have stopped sooner because there was plenty of great camping. 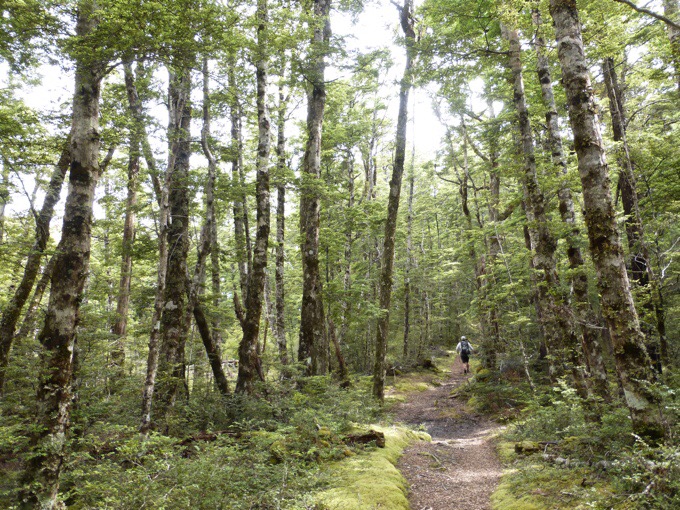 We were able to cruise a solid pace most of the day. Of course there was soggy grassy walking with plenty of mud and puddles in the forest, but that’s just a given out here that you will walk with wet feet pretty much everyday. We ate lunch outside the Hope Halfway Hut. A few TA hikers were still there taking a short day and said there was a group doing the same coming in just behind us. If we end up waiting for water levels to drop, we may end up in a bit of a crowd in a couple days. 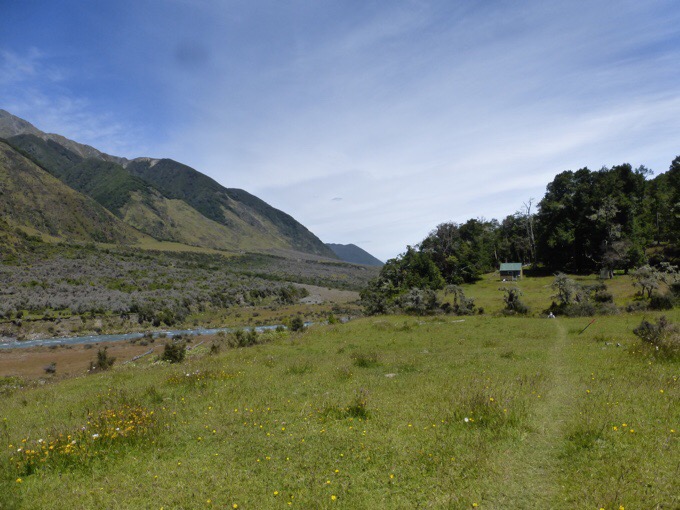 My foot seems to have plateaued with swelling and pain. It’s definitely still aggravated and seems to be a swollen ligament I think. It was more of a dull pain and a bit of a lower shin splint pain as well, but isn’t getting worse, so it seems like something that I can walk through. More of bruised feeling and slight swelling, but nothing that is stopping me so far, so that’s good. 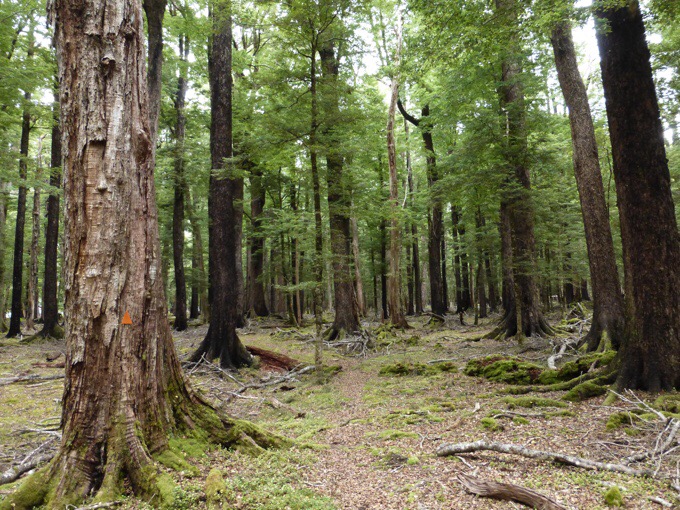 We could see in the logbook that Felix and Ned are just a day and a half ahead of us and Angelynn is around there too. Felix and Ned had to do this section in the rain the other day and their comments were understandably ones of great frustration after what happened to them last leg with getting blocked in by a crossing after TWICE doing Waiau Pass to then have to turn around and hike backwards out in need of food. I looked back on both Why Not and Buck-30’s journals for this section to see that they also had rains and challenging water crossings to contend with. Buck-30’s sounded brutal for multiple days. Out here, the Kiwis just accept it as part of tramping with how frequent it is. I find it stressful and frustrating to constantly be dealing with this factor. It’s like there is no winning. You either push to try to dodge it, and sometimes do, or just accept defeat and sit in huts waiting for levels to drop only to then walk in more fog, rain, and really cold feet. Had we left yesterday, and not rested, we probably would have been fine, but I really needed the rest. We’ll see what happens tomorrow after the rains tonight. 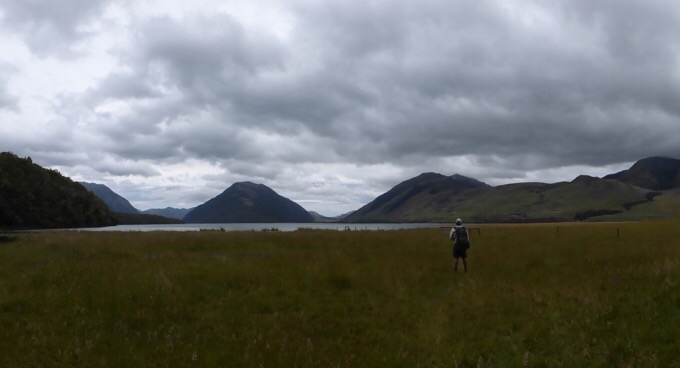 There isn’t much else that happened today. It’s been nice to walk with Griggs who sets a fast pace. A bit more about Griggs (not a trail name) is that he’s most recently from Colorado, but really has been hiking much of the last couple years. He has discovered thru-hiking and is hooked. He did the Colorado Trail, some in Nepal, the Long Trail in Vermont, and just did the PCT before coming here. He’ll probably go straight onto the CDT after finishing the TA. Griggs is 33yrs old and a computer programmer and web designer. He basically started when he was young when at the age of 12, his family took a cross country road trip and he brought a book that taught him how to do computer coding. By the age of 16, he was getting his first programming jobs and jumped right into working full time straight out of high school. It’s a great job for a thru-hiker to have as he can get short contracts that pay a lot in short periods of time. By investing and living simply, he basically has a 1:4 ratio of work to play time. For each year of work, he can travel for possibly four. Not a bad deal at all! He’s pretty much made for thru-hiking with a simple no cook diet of mostly bars, tortillas, tuna, and peanut butter that he’s yet to tire of. I mentioned that Becky is carrying 2kg/4lbs of gummies. Well, Griggs is carrying that much in tortillas this leg as he tends to have something like 5-6 wraps a day. I wish I could eat more peanut butter, but I’ve gotten to the point that I can’t swallow it. One last thing about Griggs is that he looks and has the mannerisms and laugh of my brother, so he’s very familiar in a way. It’s been nice to have him around to not go insane in my own head overthinking or stressing about all the rain and crossings. 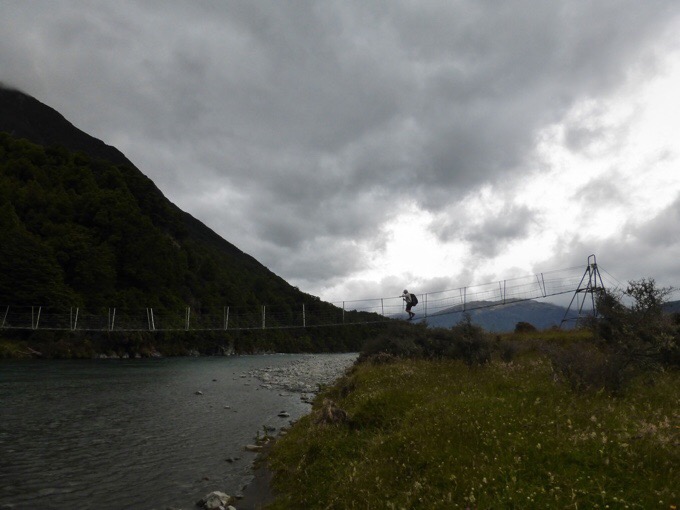 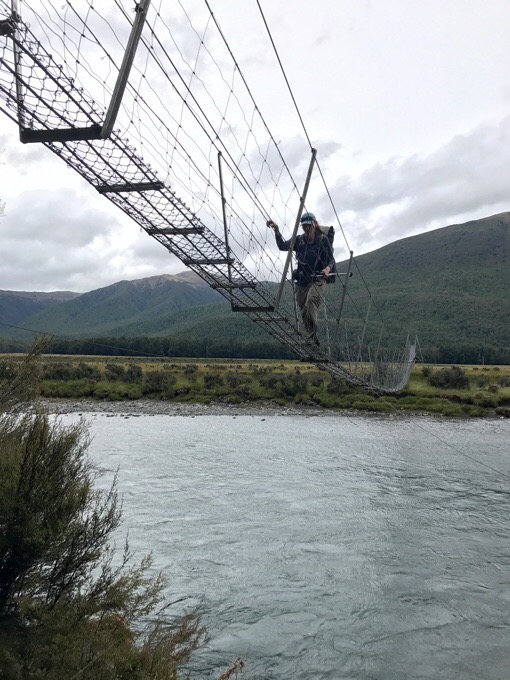 That’s about it for today. We ended up finishing at the Hurunui Hut at 7:30pm. A great and spacious hut with just one other couple here. We will sleep in tomorrow with rain the first half of the day and having gone later tonight. Still, in the back of my mind, is the worry that there are a couple crossings of the Taramakau River tomorrow after a night of rain. It won’t be till the latter half of the day, so there was no changing that we’d be hitting it after a bout of rain. We may have to sit and wait for it to drop. We’ll find out tomorrow. 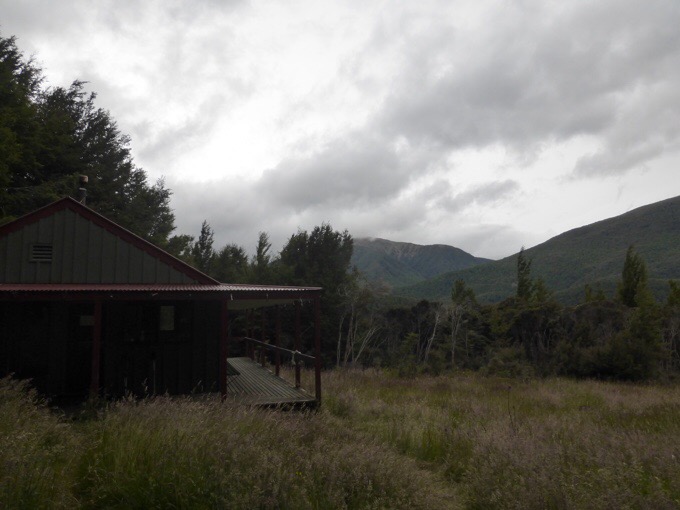 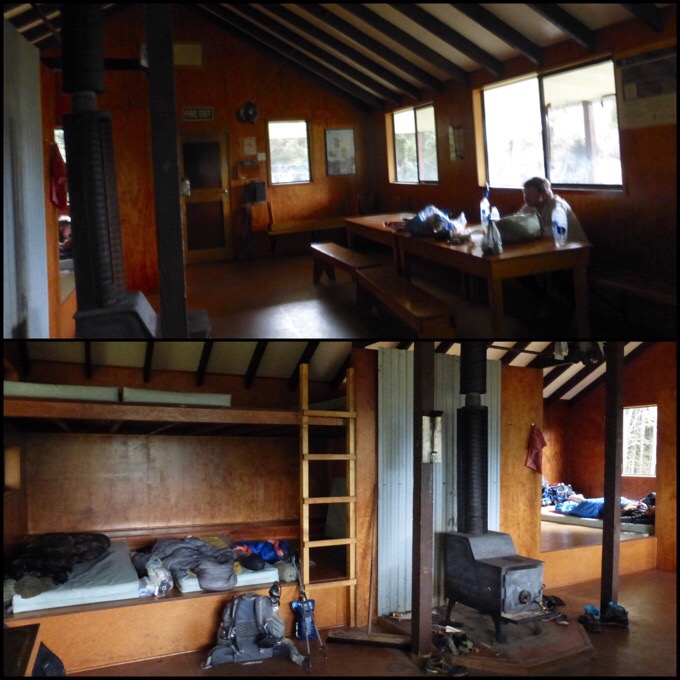 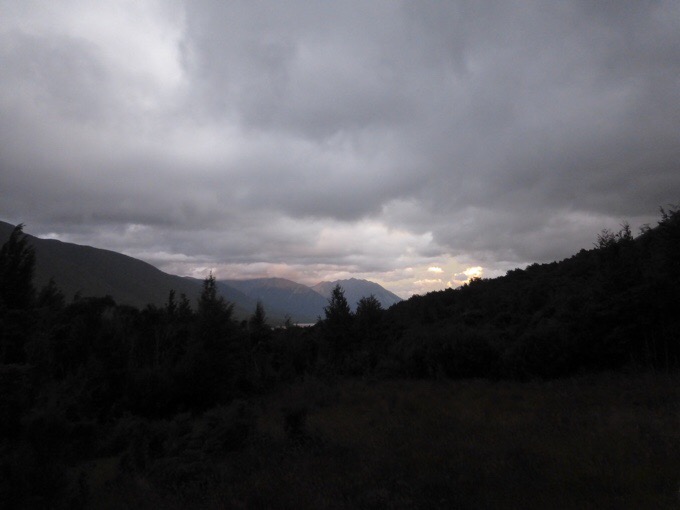