January 26th
Locke Stream Hut(1322)-Arthur’s Pass(1347)*
Mileage: 26mi/41.8km
*Had to do the official 20km road walk alternate because the Deception River was too high to go up Deception Valley. 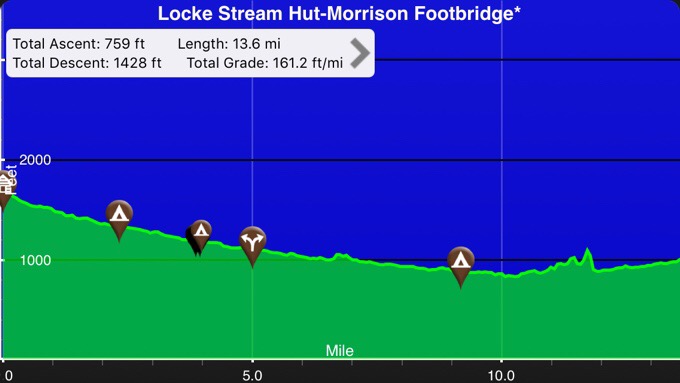 Welp, today was yet another day of rain. A full day of rain. Like all day, without a break, rain. Did I mention that it rained!? I’ve hiked in plenty of rain, but it’s rare to get a full 12-14hrs of hiking in rain, and that’s happened twice in the last five days of hiking. We’ve had seven straight days of hiking with completely soaked feet the whole day with how much standing water there is. Yes, it wears on a person after that many days, but what else can we do about it. There’s just no avoiding it and we have to just keep moving and accept it as the new normal. Again, this does not seem abnormal for what people experience in this section. It’s river valleys and it’s New Zealand. Not ideal for trying to thru-hike. Two pros for today are that there were alternates and options so we probably wouldn’t be blocked in, and I’m glad it was a steady 50F/10C so standing still wasn’t too uncomfortable and I wasn’t chilled to my core.

We got started at 6:40am with a light mist falling and immediately had our first crossing or the Taramakau River. Since it was higher up, we knew this one wouldn’t be as bad as the major one down valley later in the day. Still, it took some looking around for me to find a comfortable spot. Griggs went right in and through something deeper than I could handle. I found something more my size about fifty meters downstream. Steve and Amelie also approached by then and crossed where I did. The four of us stuck together most of the day to do the crossings together. 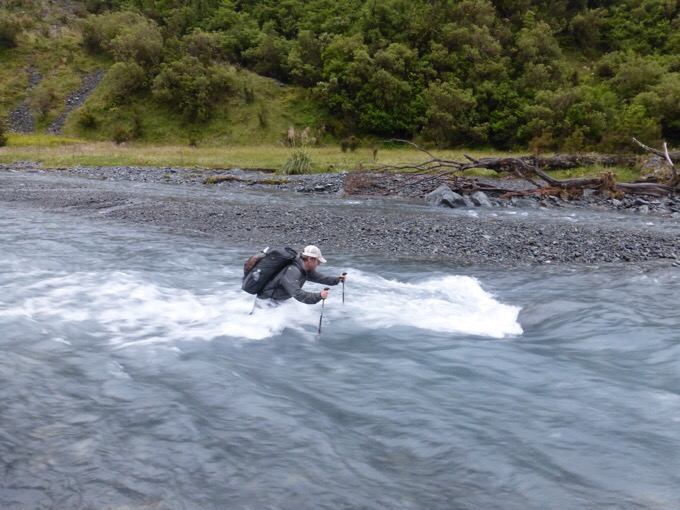 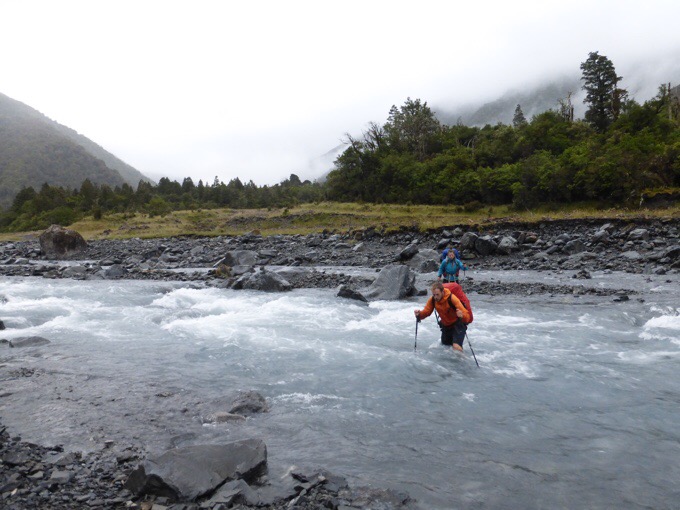 Where Steve, Amelie, and I crossed.

As rain varied from mist to steady, it was mostly smooth sailing at a 2.5mi/4km per hour pace to the Kiwi Hut for the first hour and a half. There were some wooded parts or stretches along the riverbank on rocks, but they were fortunately short lived. There were crossings of smaller streams that weren’t dangerous at all. Cold, but not dangerous. 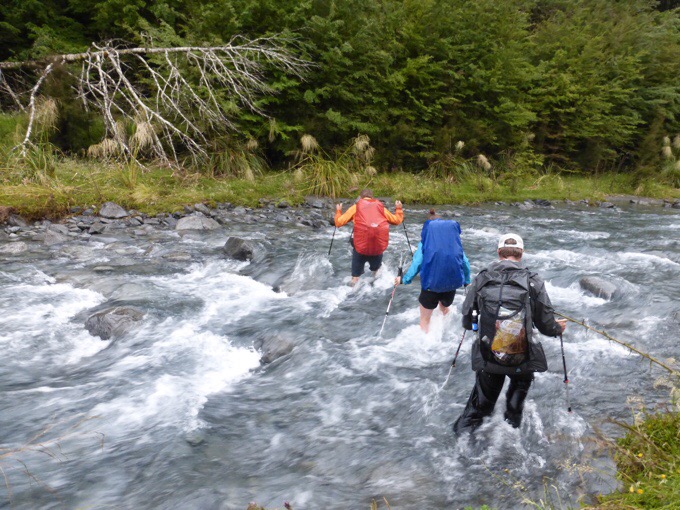 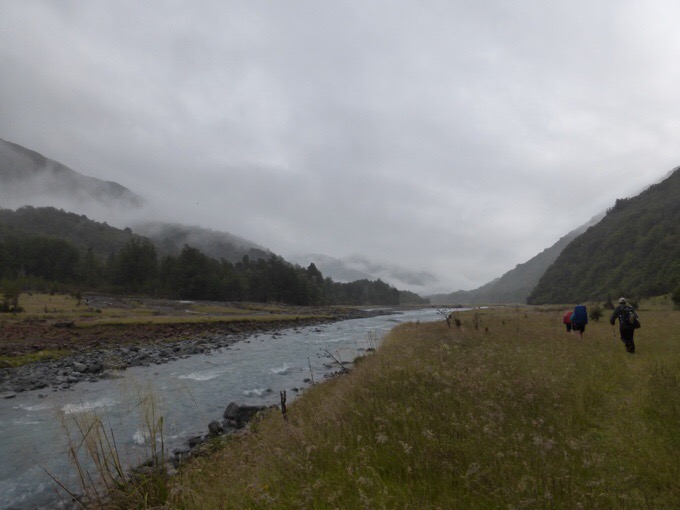 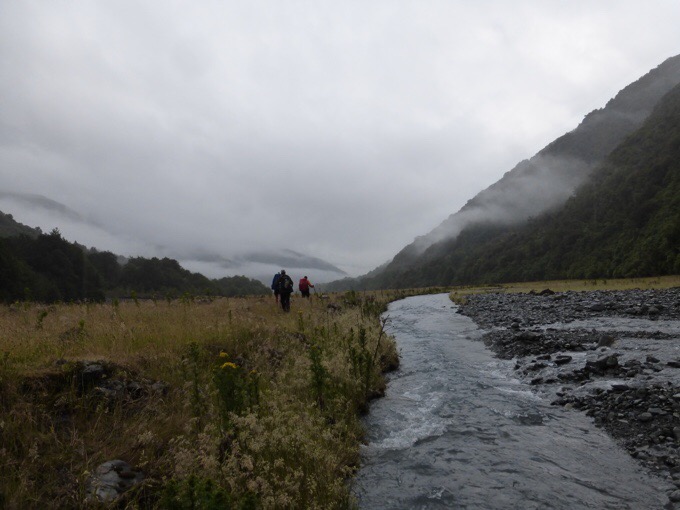 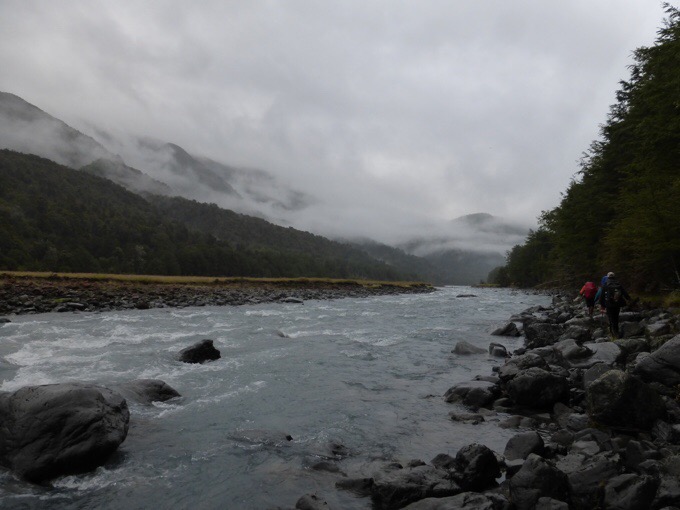 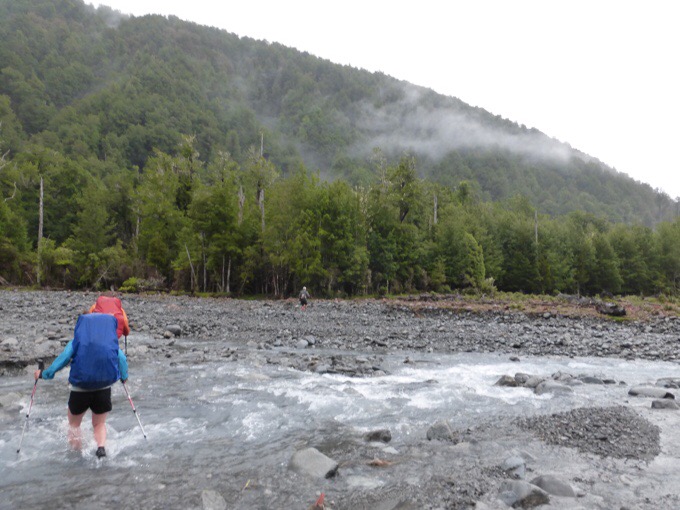 Just after the Kiwi Hut was the Taramakau River crossing. It is suggested that if flow is high that hikers should not cross downstream of the confluence of the Taramakau and Otehake Rivers where the track goes normally. By crossing upstream, it is possible to cross many branches of smaller things and to cross the Taramakau and Otehake before they merge. Fortunately, that worked for us and we found a spot to cross where water was swift, but low, so doable. Our feet were quite cold afterwards as it was wide and took minutes to cross. 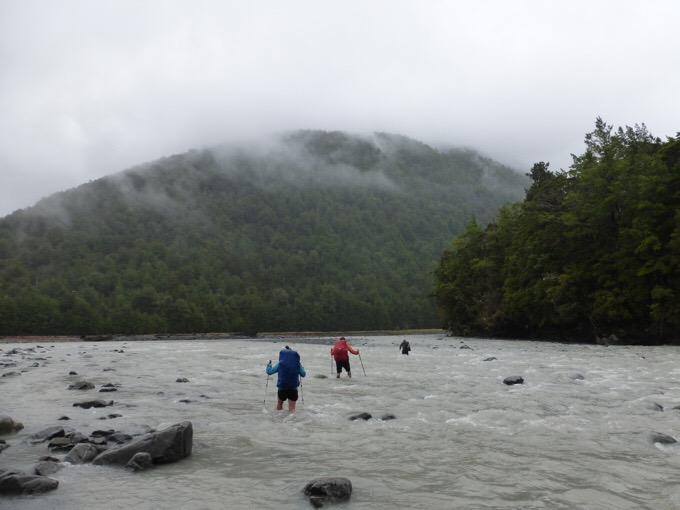 Once on the other side, we did have some bush to got through off the bank, but it appears that enough people have done it that way that there is a bit of a path and fortunately, it wasn’t as dense as it looked from the outside. Definitely the way to go if water is high! We did try to cross the Otehake as a group further downstream to avoid the bushwhack, but it was just too deep and swift. I was being brought up off my feet and we chose to go back up where it was shallow and take the brief bushwhack. I’ll take that any day over a scary crossing! 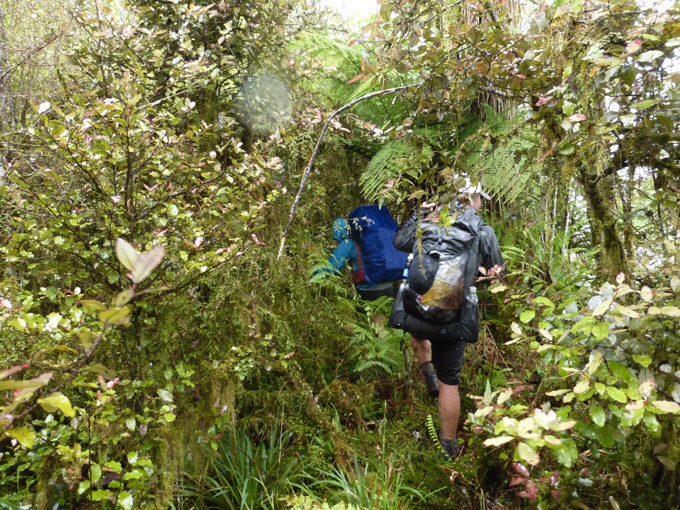 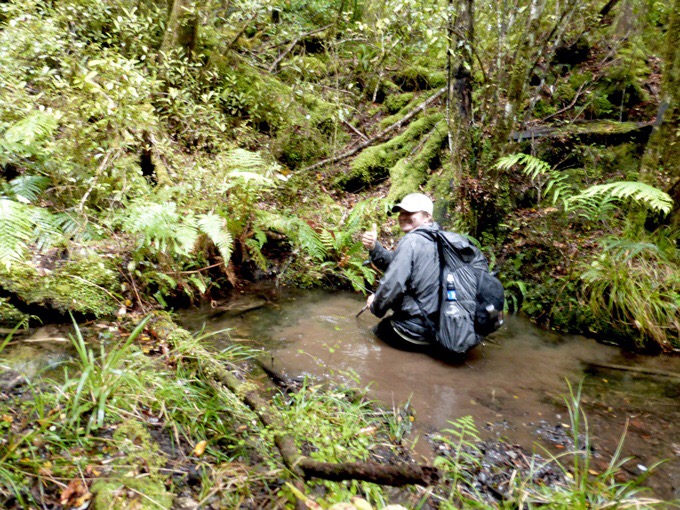 That was unexpectedly deep mud.

We all were relieved it was over and got into a less dense forest where we decided to do a very quick lunch. We all were wet and cold, but not too bad to be able to stop and eat as light rain fell. I don’t know if I’ve ever eaten lunch that quick, but I think we were done and back hiking in about 20mins. No breaks today…

After this, we had some hiking in and out of the forest and riverbank. The official track follows a flood track that is quite beat up and destroyed in the forest, but is above the many branches of the Otira River that couldn’t be crossed today. It was slow going, rain was a bit heavier, and we were just wanting it to be over. We were so close to reaching the Morrison footbridge that led to safety and a road walk! 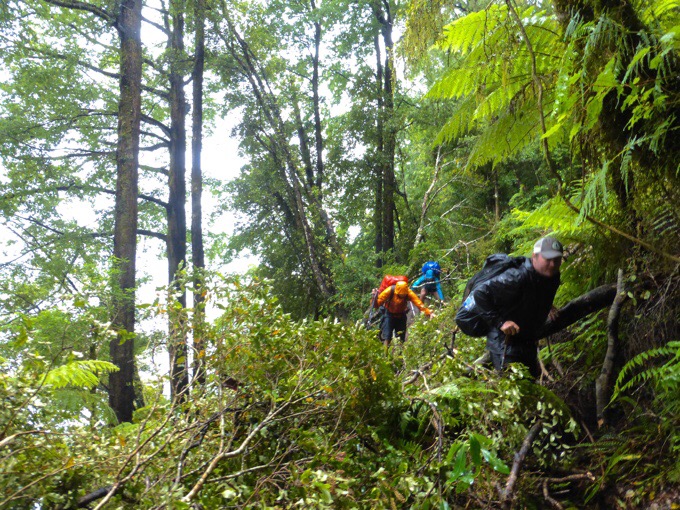 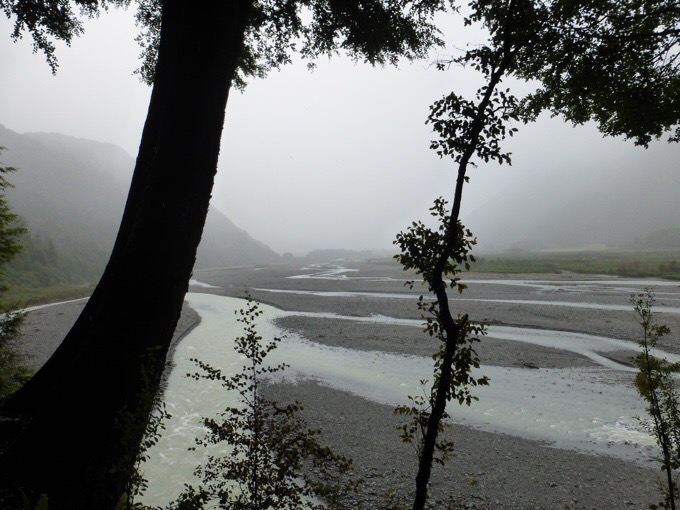 Looking down on the Otira River.

Griggs and I said goodbye to Steve and Amelie and pushed on ahead realizing we could make it to town today if we tried. The TA usually goes up Deception Valley fording the Deception River many times over the next couple days, but we knew it was impassible. The official alternate is to walk the highway for 12mi/20km that parallels it to the next trail town of Arthur’s Pass. We decided to make that happen. We got to the footbridge around 2pm and were so relieved to have the crossings over with. At this point my camera got put away and I used the iPhone that had some fog on the case’s lens at time, but I feel gives the full feeling of this gloomy, rainy, blustery day. 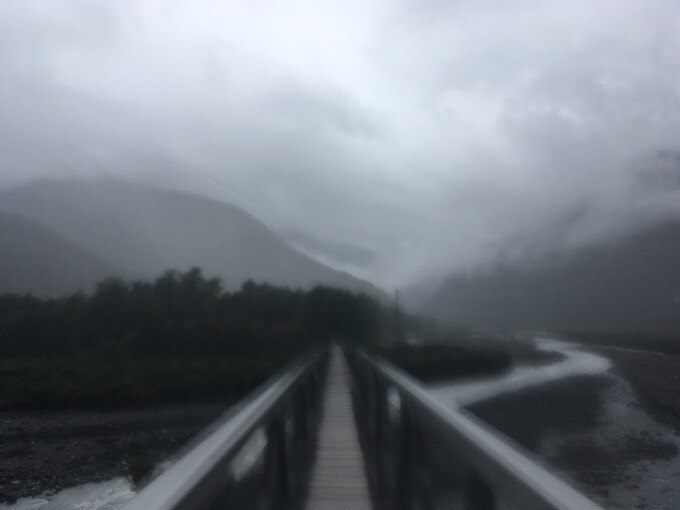 We made it to the Morrison Bridge!

When the weather bomb hit over a week ago, there was a massive spill over the highway that closed it and it just reopened recently. Here’s a photo from the news and a photo of how it looked today with crews still clearing it. 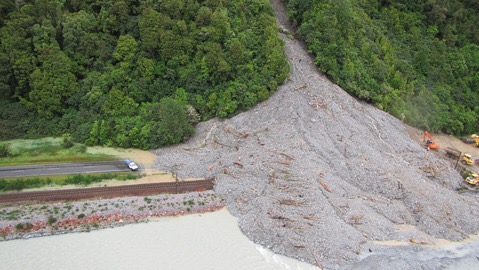 An overhead view of the Arthur’s Pass spill after the weather bomb courtesy of NZ news. 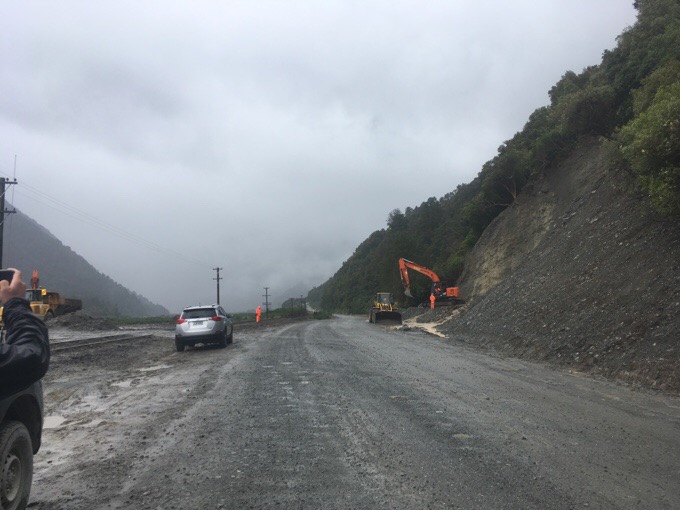 We were fortunate that because of the slip, there was less traffic on the road. There was still plenty, but it was in waves and not as constant. Most seemed to be coming towards us. 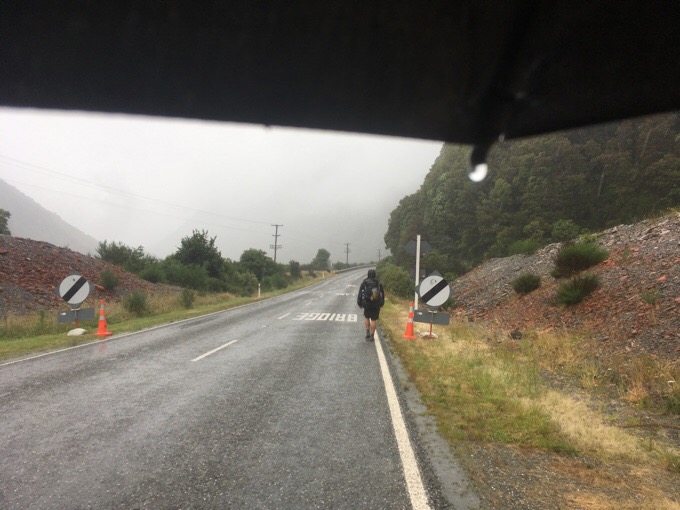 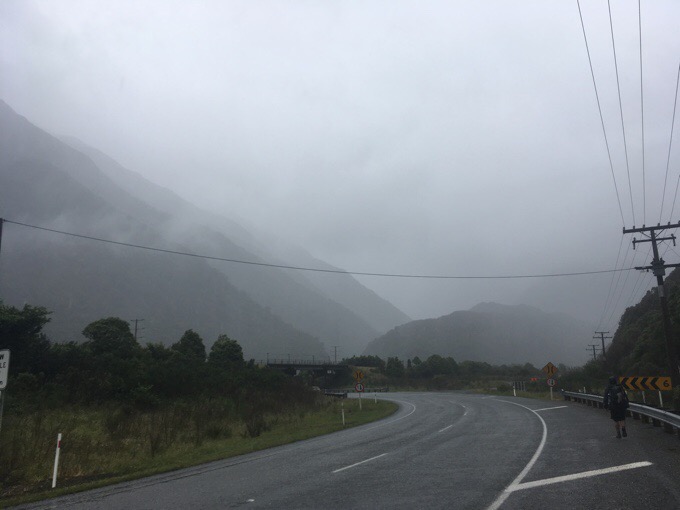 After an hour, we came upon a side motel and cafe. We totally took the opportunity to have hot chocolate by the fire. It was sooo tough to leave, but we still had 3hrs in heavy cold rain to Arthur’s Pass. We called the YHA hostel there and got the last two dorm beds, whew! 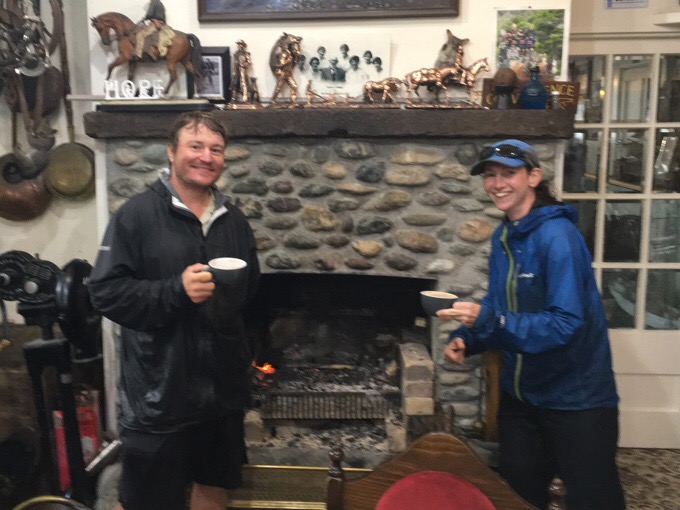 I don’t think I’ve ever enjoyed hot cocoa by a fireplace so much!

The roadwalk was a consistent uphill that felt eternal after our day and all the rain. We had our headphones and made great pace up the 2000ft/600m climb to the top of the pass. It was quite a scenic and nice walk even in the rain. 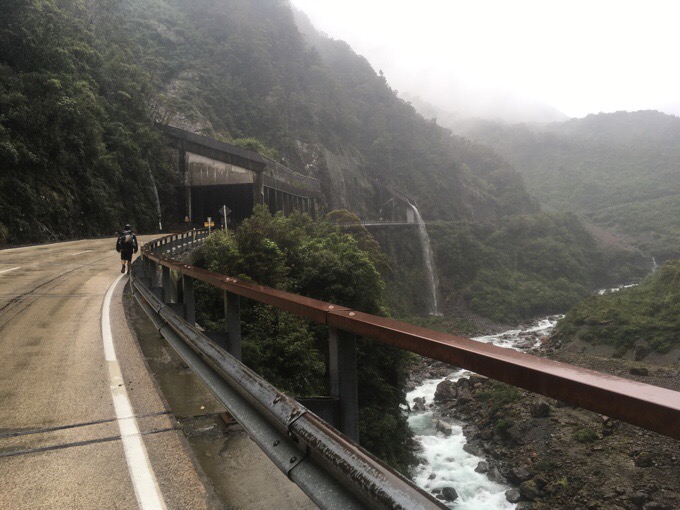 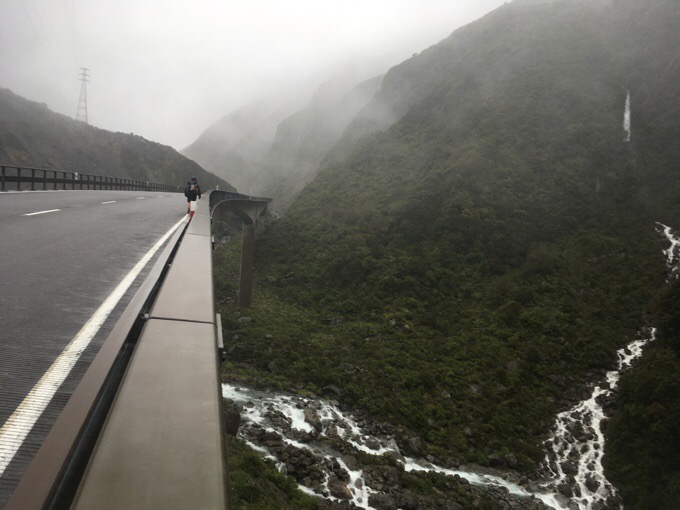 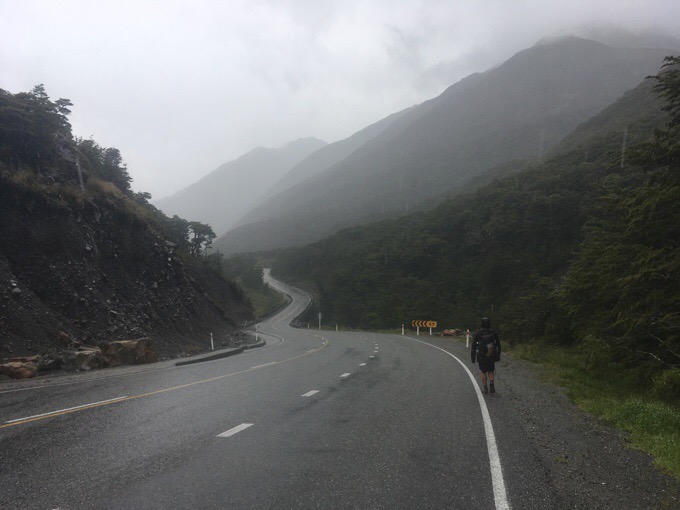 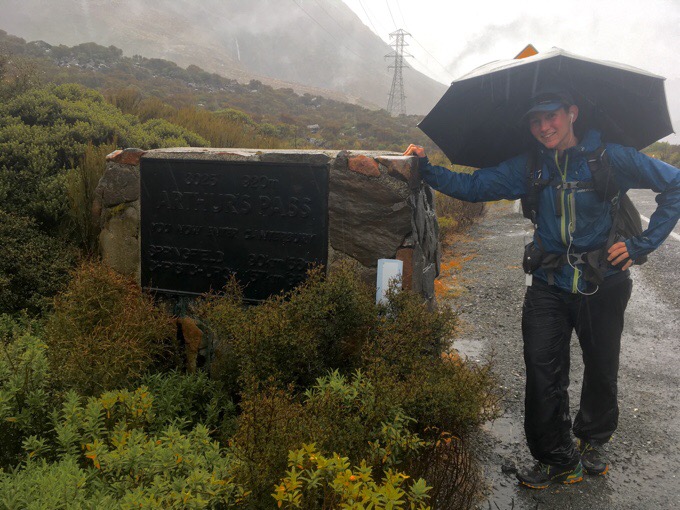 Then it was some nice downhill to the town of Arthur’s Pass. We made it to town around 6pm and one restaurant was open. We have a ton of extra trail food because we had extra for if we got blocked in by the high waters and we both have resupply boxes in town. Still, after the day we had, we were getting a meal! We were total hiker trash and plopped down in front of the fire until our food was ready. 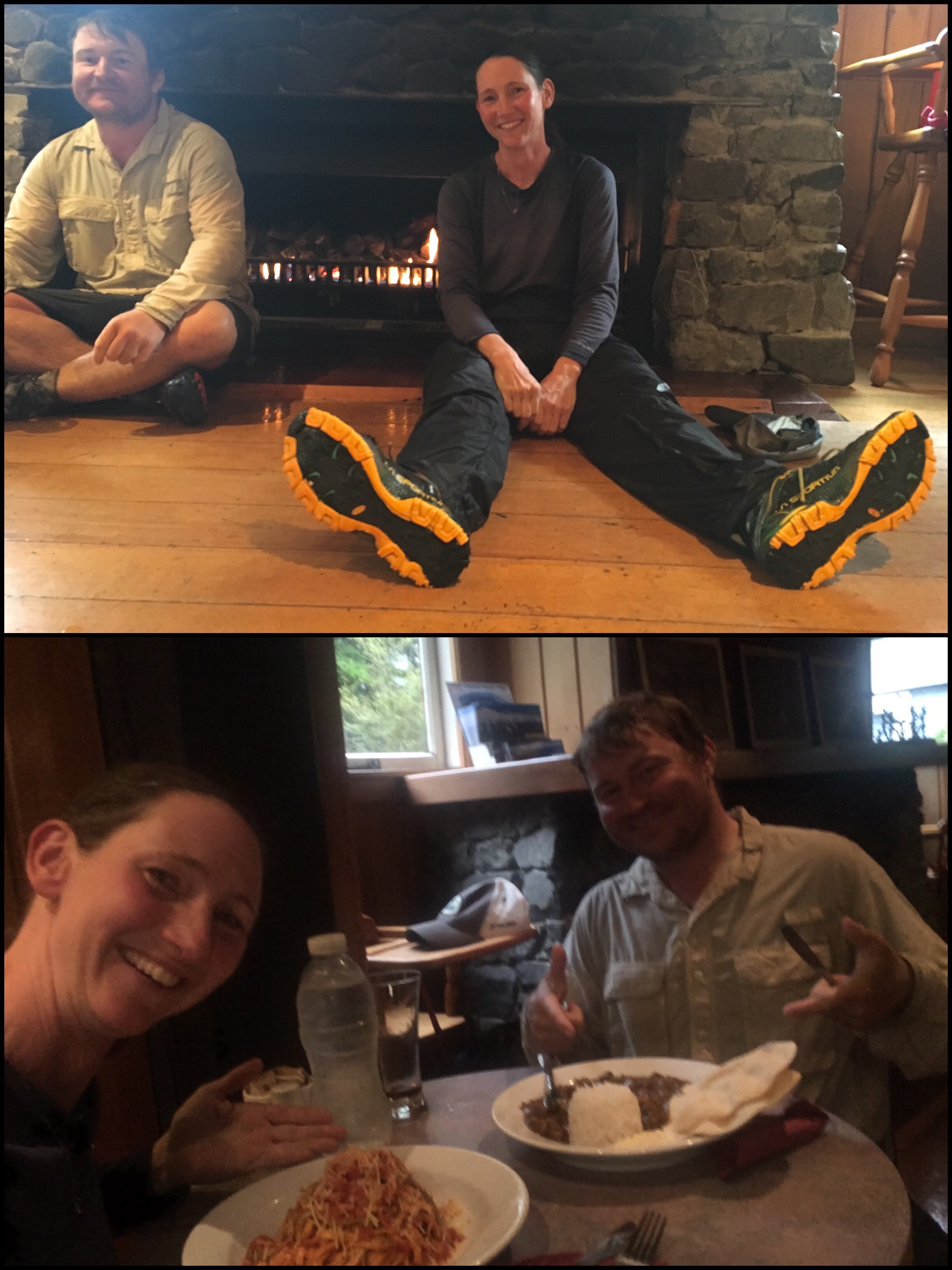 Then other hikers that had been in town on a zero came in! Angelynn who I haven’t see in 40 days! Also, Jan and Jasmin, Sylvan, and Steve. We all made it to town and were happy to have a dry warm place to be. 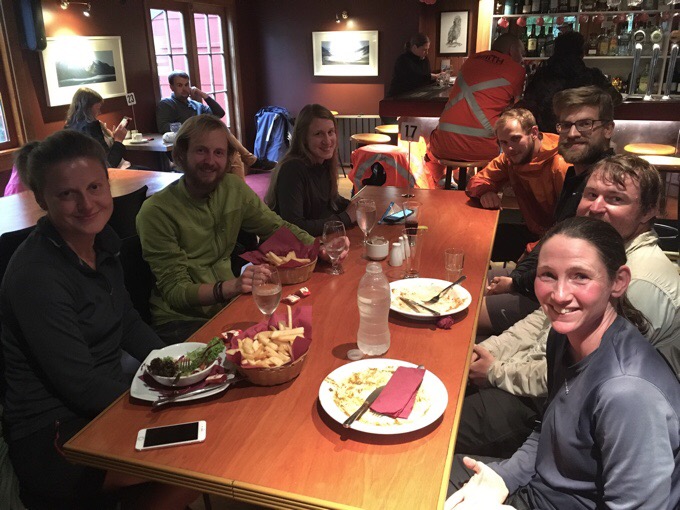 The Mountain House Hostel is laid out nicely. Wifi was shoddy, but may work in the morning. We are in a dorm room for 8 people and everyone is really quiet. I’m just happy to be inside at this point. There’s no point in washing our clothes, so we threw them in the dryer. They say another dump is expected overnight. Our plan is to leave by noon when the rain should ease and see if we can ford the first river on the next part. If not, we may be waiting it out somewhere before it. Weather looks to be a mixed bag up ahead, but it’s a short stretch to the next town at least. Ok, crossing fingers that the next river is fordable tomorrow!