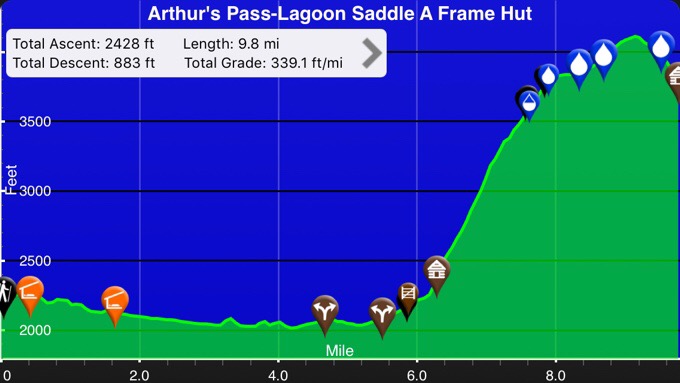 The rain from yesterday continued through the night and this morning. It was downright blustery and unenjoyable rain. The amount of rain that fell in the last week and even 24hrs was insanely high, but I don’t know the numbers. Arthur’s Pass in particular gets a lot of rain, but this recent stuff is national news for NZ. Checkout from the YHA was 10am, but the owner was super nice and let us hang out in the lounge until the rain lifted. We knew it should stop around noon and had no want or need to hike in more rain, so it was the perfect opportunity to relax and catch up on things. There is yet another river valley to contend with in the next section, so we decided that we wanted to do a shorter day and let the river go down overnight. It shouldn’t be bad tomorrow, but today would not have been ideal for crossing it. 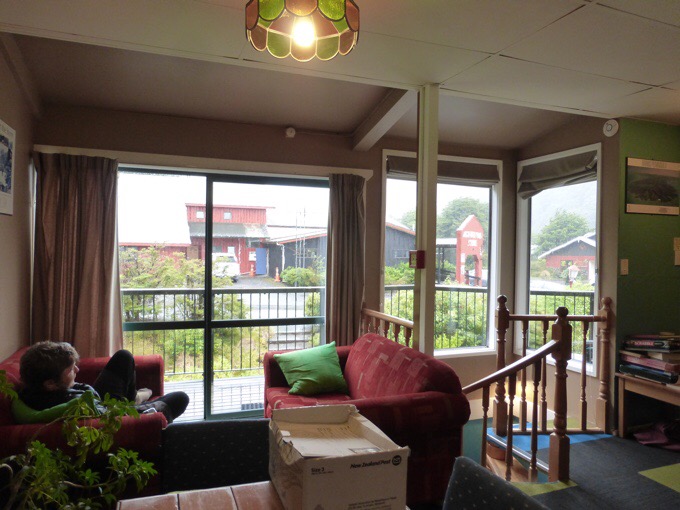 Watching the rain pour down from a comfy couch. 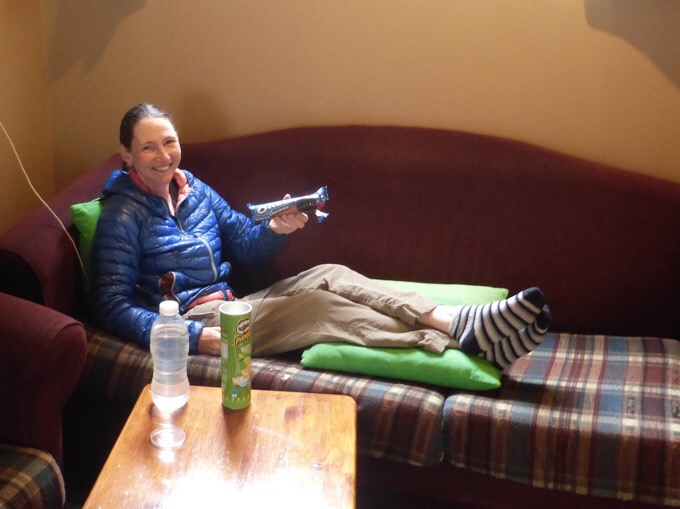 Angelynn and a couple others were antsy to move on since they had taken zeros yesterday, so they chose to hike out earlier in the rain. It did clear up around noon, and we saw blue sky and sun for what felt like the first time in forever! It was glorious and the road walk out was beautiful as we were surrounded by mountains. 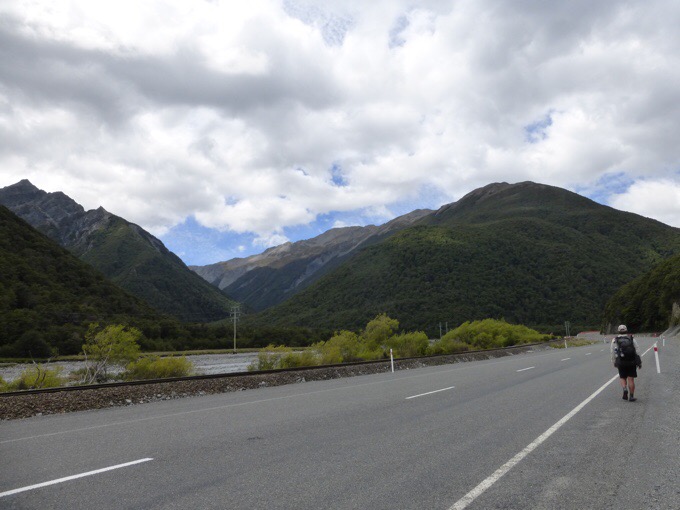 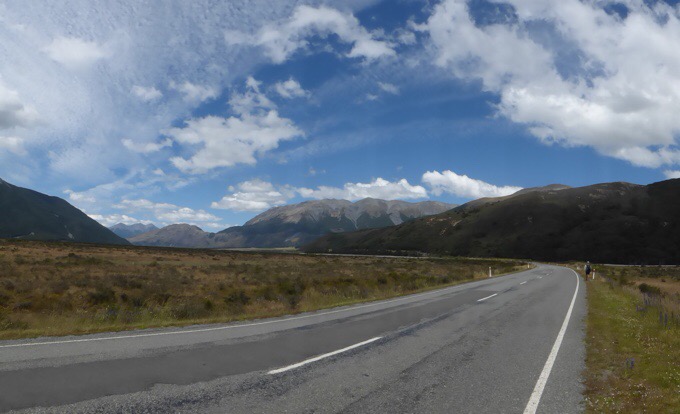 There wasn’t a great shoulder to walk on, and there was some construction on the road, but there wasn’t a lot of traffic, so it was a nice road walk for about three hours. It was two hours to reconnect to the TA where the Klondyke Track begins, but that track had crossings of the Bealey and Waimakatiri Rivers, which would probably not be doable today. The track fortunately parallels the highway, which is an official alternate, so we continued another hour along the highway right next to the track taking in the great views without the stress of high water crossings. When we crossed the river on the bridge, it confirmed that we wouldn’t have been able to ford it today. 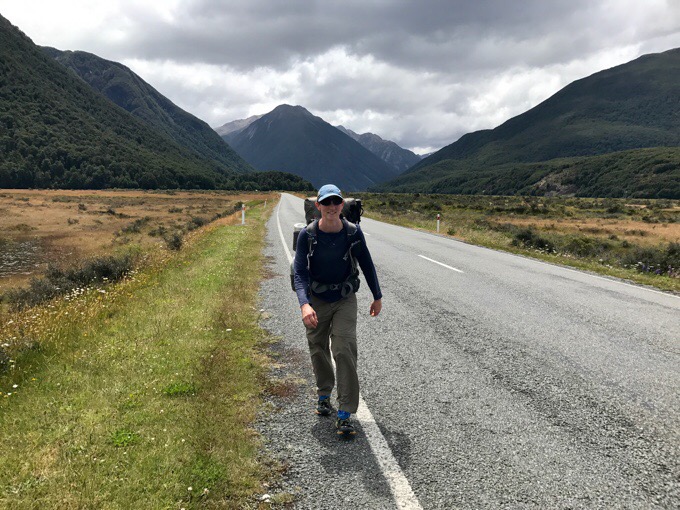 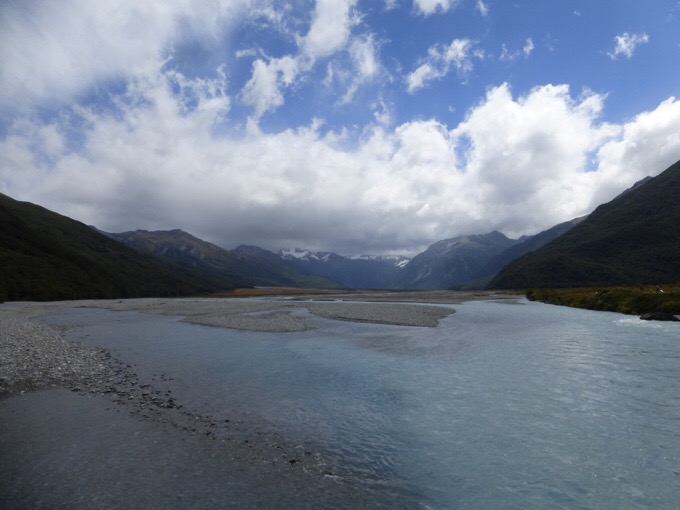 Crossing the Waimakatiri River over the bridge.

It is frustrating that the TA runs across so many areas prone to dangerous crossings, but I’m thankful that there is a safe alternate right next to it. Good to have an option and not be stuck waiting for water levels to go down. In this case it would be a few days probably. If it would have been one, we would have totally waited and taken a zero to be able to do it. The road was right next to the track, so I don’t feel like I missed out on everything, and quite enjoyed it. Looking back towards Arthur’s Pass, we could see it was still gloomy and we were entering what is known as the drier side. Some tourists were taking a photo at the Arthur’s Pass National Park sign and you can see how much darker it looked back there. 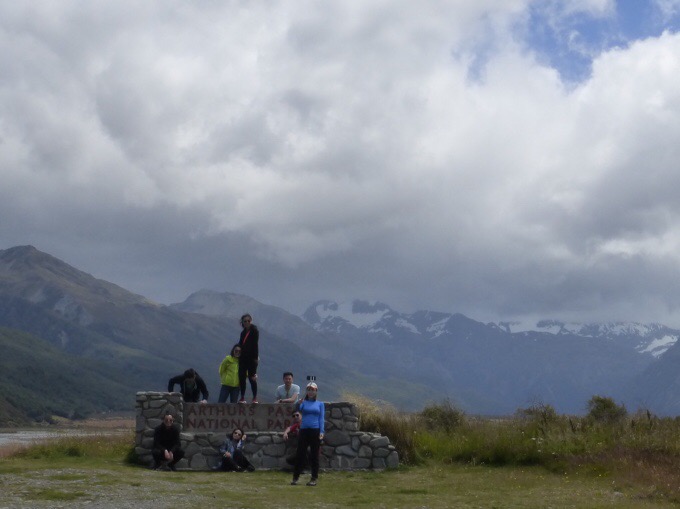 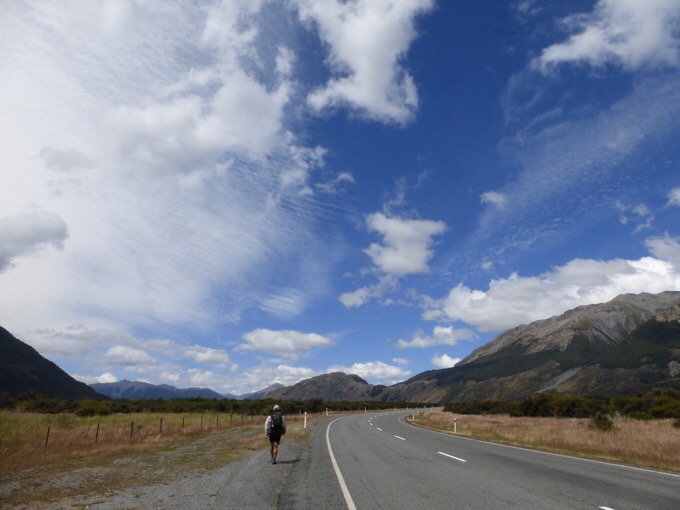 At 3:30pm, we got to the trailhead and started hiking up the Cass-Lagoon Track to Lagoon Saddle. It started with some of the best forested hiking we’ve had in quite awhile. Beautiful dry trail with few obstacles to negotiate. 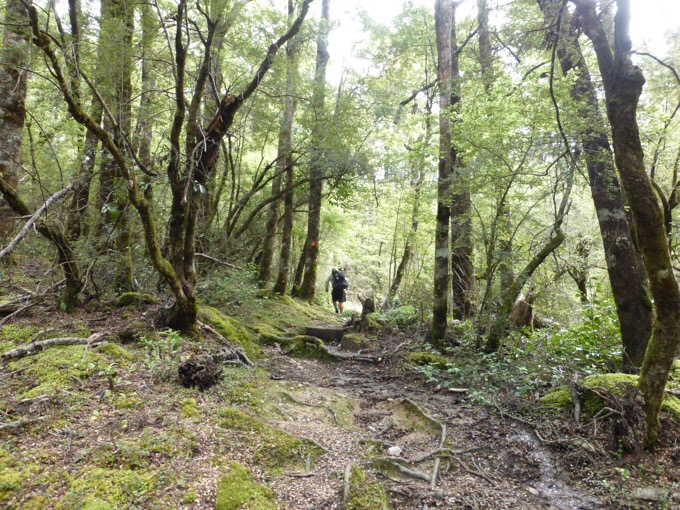 Soon, we broke out above the trees and into the tussock where the marshy muddy hiking began. We had four hours of walking with dry shoes today before we hit the tussock and it was such a glorious four hours. Once in the tussock, it was the foot sucking slip-n-slide mud and we were for sure on the TA. 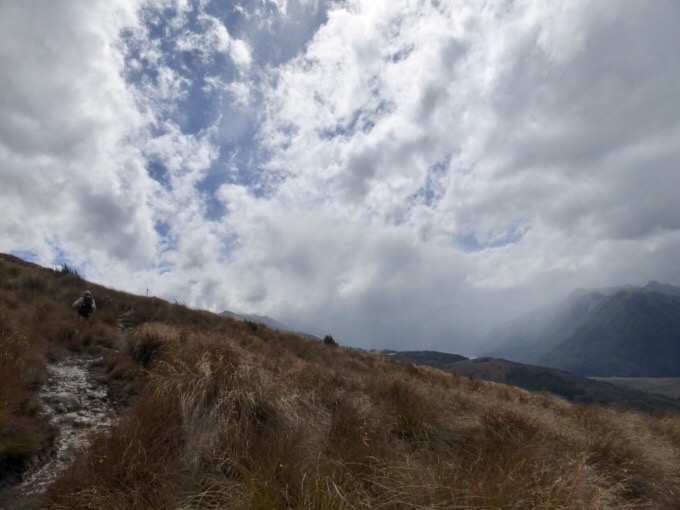 At one point, I unexpectedly went into mud up to my knee and caught myself with my hand that also went into deep mud. Fortunately, a stream was not far after as I was covered in thick mud on my legs, hand, and hiking pole handle. Still, the views were some of the best yet! Looking back towards Arthur’s Pass, it was raining, and we could understand what they meant when they said this was the dry side of the pass. 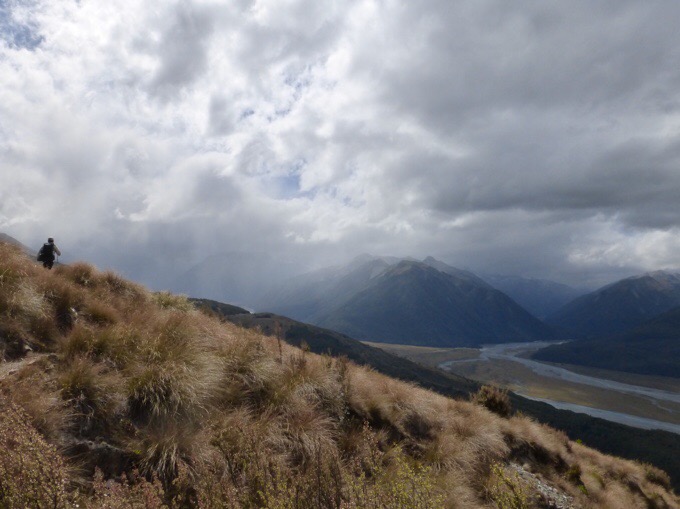 The camera was not capturing the beauty and grandness of the view and seeing the rain come down from a distance, but I tried. It really was some of the best views we’ve had so far as we hiked up to Lagoon Saddle. 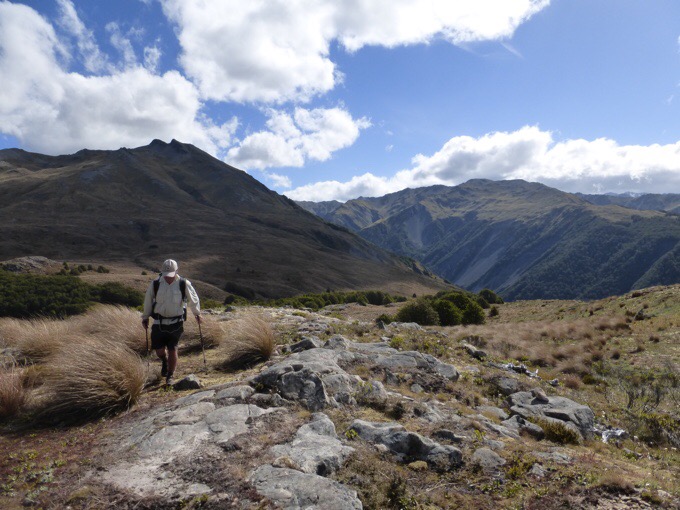 The climb wore me out. I am carrying a ton of food because I have extra leftover from last leg and had a resupply box sent to Arthur’s Pass. This section is just three days to Methven, so I’m carrying days of extra food because I couldn’t stand the idea of throwing the food away just to buy it again in a few days. I’m also just wiped out today. I think it’s a combo of the cold rain yesterday, which always makes me more tired, and I’m premenstrual, so my legs and arms feel like lead. I could have easily taken another zero today, but I have at least a zero planned in a week when I visit a friend near Lake Tekapo. Plus, weather finally looks to be great, so we’re hiking in it no matter how tired I am! 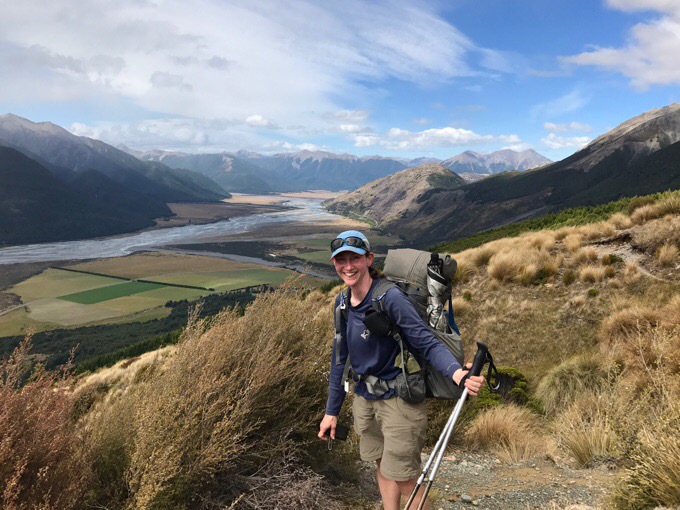 We hit the Lagoon Saddle A Frame and Hut at 5:30pm, and were happy to call it a day. There is the A Frame and a small hut. The two person hut was taken by TA hikers Jeff and Lee, who we last overlapped with at the Blue Lake Hut about a week ago. They ended up skipping the last section, like many chose to do because of the high rivers. Since the hut was taken, we took the A Frame, which is more of a lunch spot, but a perfect shelter. It’s quite cold up here as we are higher than we’ve been for awhile. The sandflies usually don’t bug me much, but they are brutal here and I’m happy to be inside. 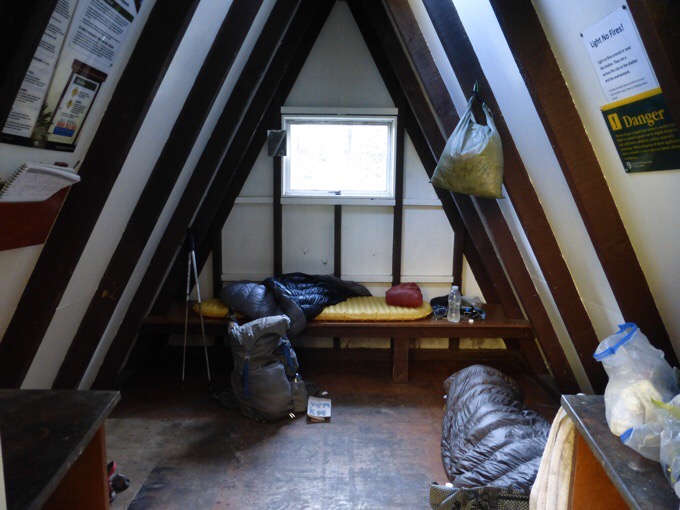 I fell asleep before 9pm and figured I’d just finish my writing in the morning. We are going to sleep in a bit to let the sun come up before we start the many crossings ahead tomorrow. They should be minor, and nothing major since we’re giving it overnight to really go down. We can see that Angelynn and two others are just ahead of us, but other than that, we seem to have a nice pocket of space from any major herd and that’s been nice. Angelynn and the guys were thinking about going back and northbounding the last section we road walked around to do Deception Valley, but they must have changed their mind as they went out in the rain this morning. There is no way that valley will be fordable for awhile. I am bummed to have missed out on that section, but there really was no way unless we waited multiple days, and even then, it would have been questionable. Can’t win them all I guess. It seems many have this same situation happen for Deception Valley. It is in a good spot for me to be able to return to section hike if I have time after the hike. 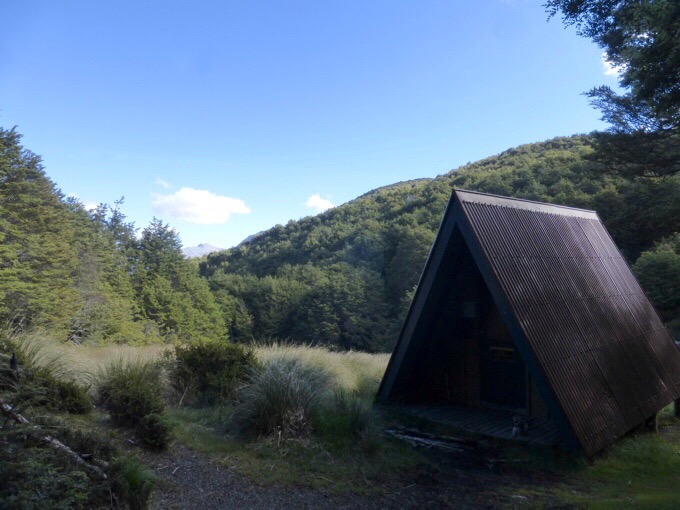 So let’s celebrate that we hiked in sun today! Plus, the next few days look to be sunny as well! Still, in the section behind us, there is rain in the forecast, so I guess it is true that we’ve entered the drier side, yippee!!!