Day 86: The Other End Of The Spectrum

It was great to get caught up on some sleep last night. Temps seemed to drop pretty low and it was the first night all trail that I was chilly and woken by the cold. It was probably in the upper 30sF/3.3C overnight. I woke still tired and know this is a monthly thing for me, but it’s a bit more than usual. It will pass in a few days, but I could have easily slept all day. Due to camping restrictions, we could only go 17mi/28km today. Since it was cold this morning, we slept in and started hiking at 8:35am. Great timing for me to have this situation come when I’m so tired! We knew we’d be fording the Harper River many times today, so we bundled up anticipating cold crossings with how cold it was outside. It was 45F/7.2C by the time we left and I had way too many layers on, but better safe than sorry. It started off with a steep gravel descent down into the valley. 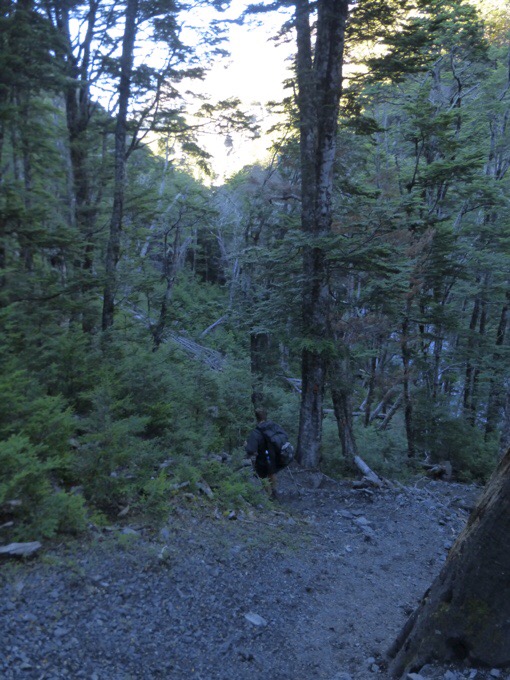 My foot seems to be something that I will be tolerating possibly the rest of the trip. It starts off stiff when I first start off each day until it accepts that I’m walking. Then it basically hurts like a bruise on top most of the day and makes walking less enjoyable with consistent pain. It’s the same foot that has the bad ankle and an ankle surgery many years ago, so it tends to yell at me from time to time anyway. At least the pain isn’t getting any worse. It is tolerable to walk on, and nothing that is going to prevent me from hiking, but it does impact the enjoyment a bit to have pain. From here on, you can assume it’s the same and feeling bruised and stiff with slight swelling unless I say otherwise. More of an inconvenience than anything else. To be expected after 7+ months of hiking I guess…

Once we got down to the Harper River, we were happy to find the upper crossings to be quite shallow. I was surprised by how much wooded hiking we had in the upper part of the valley, but after an hour or two, when we passed the junction to the Hamilton Hut, it opened up more and we were along the river. The layers came off pretty quickly, and it turned into quite a warm day. 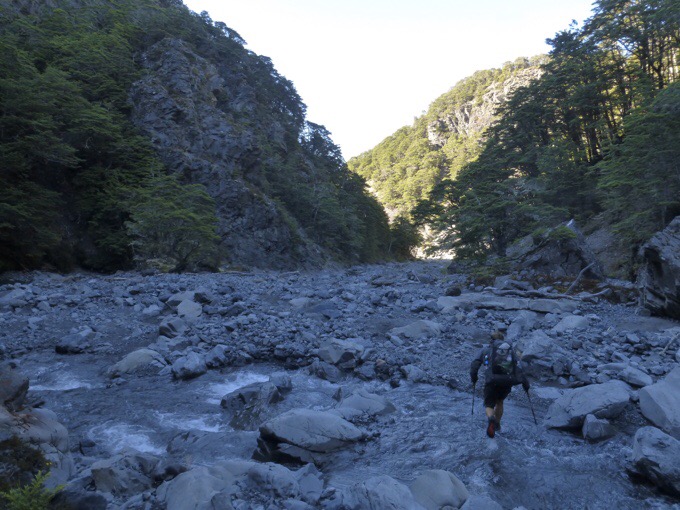 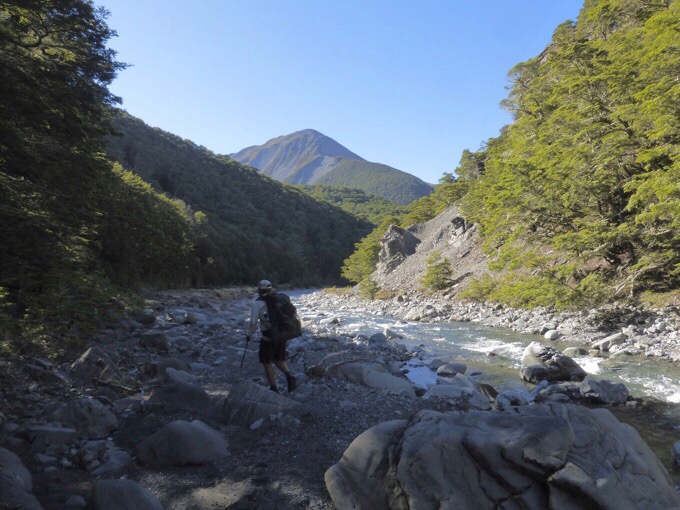 We’ve been told that this side of Arthur’s Pass is the warmer and drier side, and it is! Today was the total other end of the spectrum from the last few river valleys. It was dryer, less mud, more rocks, sunnier, and much warmer. It’s hard to imagine this is the same trail compared to what we were walking through just two days ago. 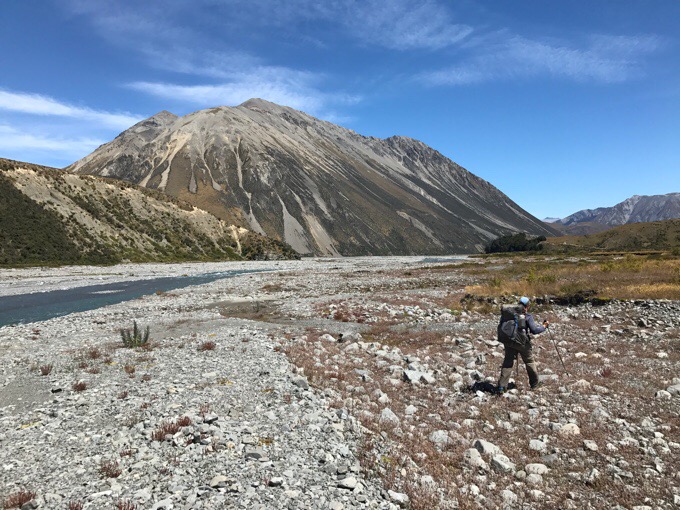 Since there’s been so much rain, we were concerned about the Harper River crossings. We crossed it many many times, and some of them were swifter and deeper than I would have liked, but doable. Not sure I would have done it yesterday and I’m glad we gave it an extra night to go down some. 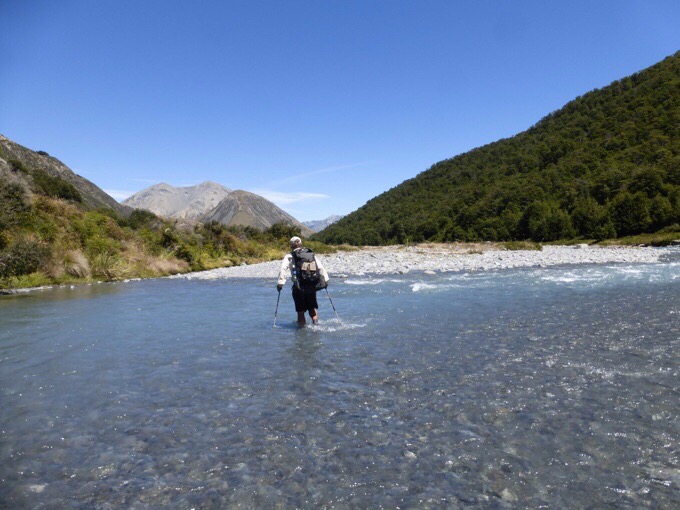 The track notes mention an option of staying on the left bank to avoid all the crossings, but when we tried that, the bushwhacking was too frustrating to make it worth it. Back into the water we went. 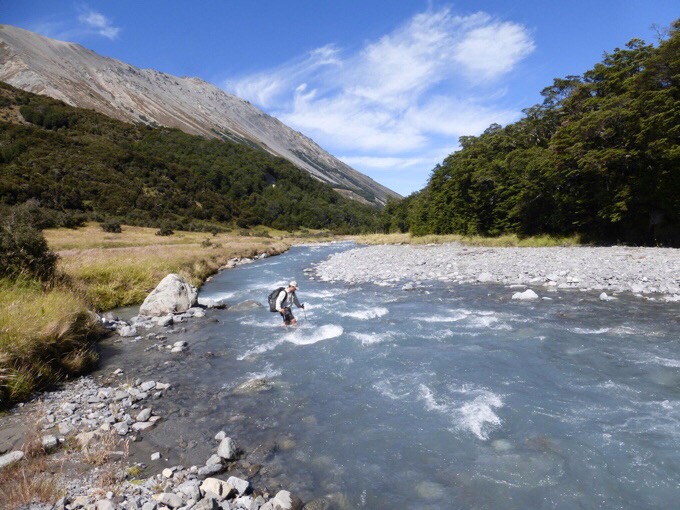 The trail isn’t marked much, and follows a faint four wheel drive track that continuously crosses the river. The only person we saw all day was at a random spot in the middle where a 4WD vehicle was parked and the person was camped. It seemed so out of place to just walk by a car in this setting out of nowhere. 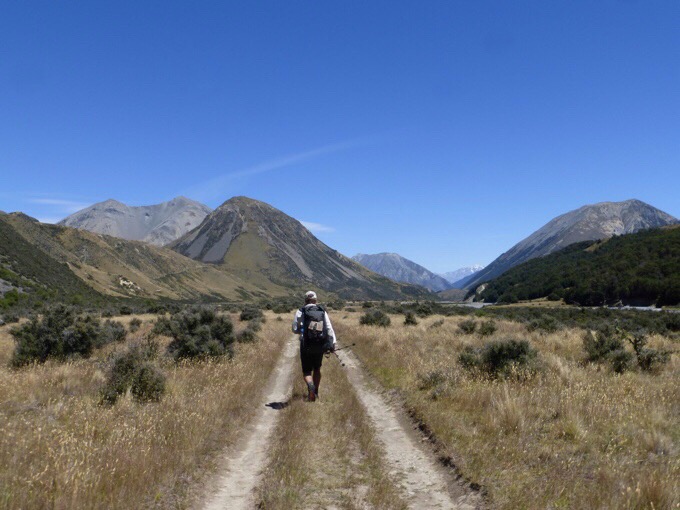 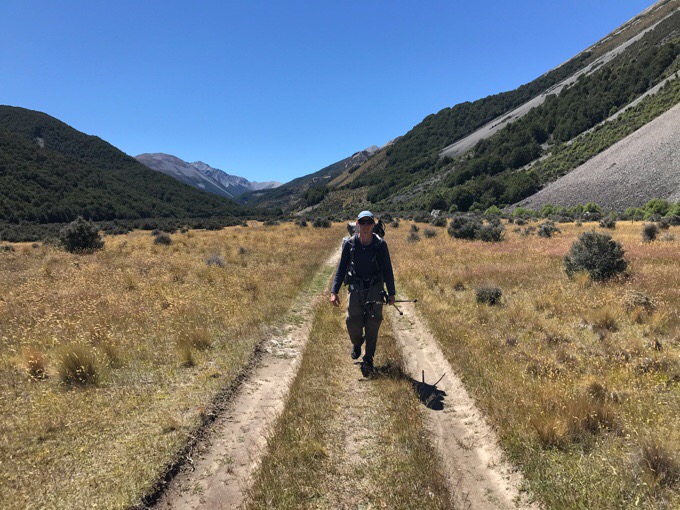 We took a longer lunch since it was a short day, and I made one of my extra dinners for lunch. It was rice that I wrap up in the most awesome tortillas ever. I keep meaning to mention probably the most popular NZ hiker food that most hikers carry. It’s the Farrah’s soft tortillas and the Sealord’s tuna packets. Both are sold in a ton of flavors. Theses two items will be what I miss most in food that can only be bought in NZ. Especially the tortillas. All other soft tortillas will pale in comparison to Farrah’s. They never crack or dry out and are so delicious. They are expensive and heavy, but most hikers still use them. As I mentioned before, it’s Griggs’s main meals. He has two tunas a day and 5-6 of the kids sized tortillas. As for the tuna, I don’t know how I’ll react going home to unflavored tuna. It’s been so nice to have a variety and there are also salmon options sometimes. I’m forever ruined by these two great items I have for lunch everyday. 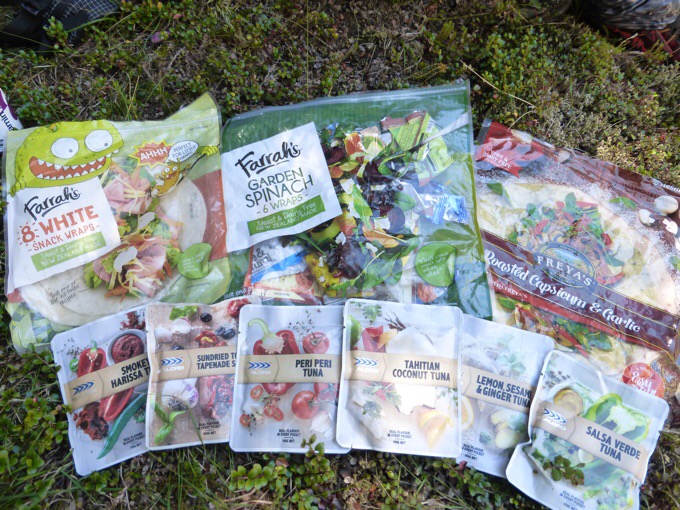 After lunch, it was more of the same and the afternoon seemed to drag. We both put on headphones and did our best to cruise. 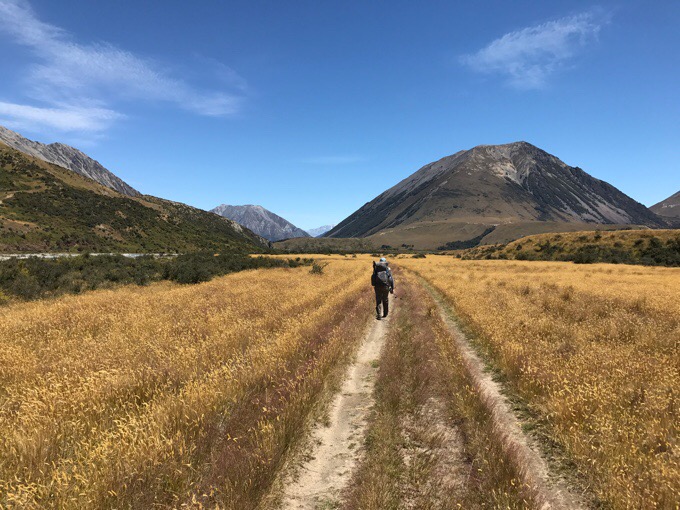 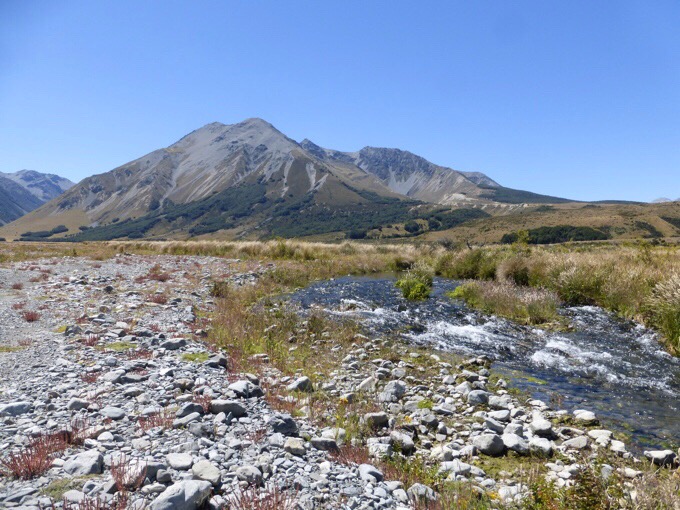 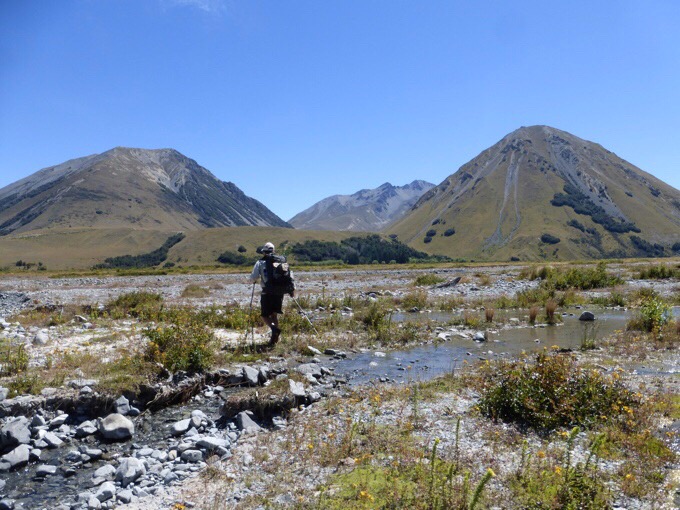 Once done with the 20-odd crossings, we hit a thin path just outside private land that was seemingly new and not very worn down. The track notes say we cut through that land continuing on the 4WD road, but there seems to be a new electric fence and a hand written sign telling TA Walkers to take the grass outside the fence instead. It was in the upper 80sF/31C, so it felt longer than it probably was. 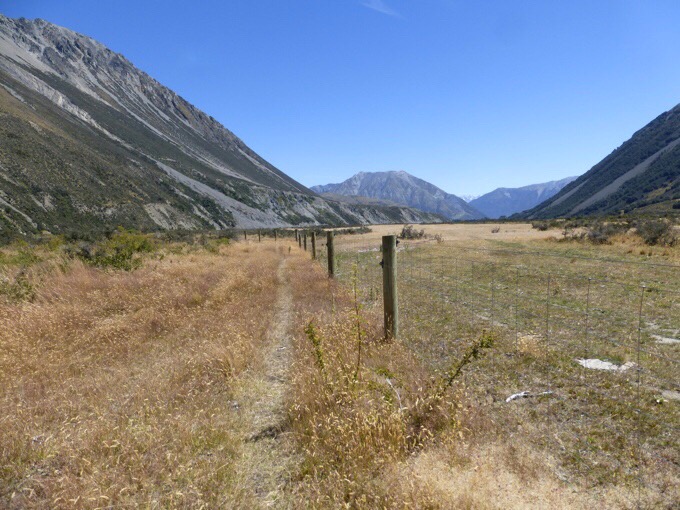 Then it was some cruising on a more used gravel and dirt road, and we arrived at camp at 4:45pm. It was a short day, but it is clearly stated that this is the only camping between here and town another day’s hike away. It is a grass and gravel field with a toilet, water spigot, and picnic table provided by the Power Trust Company. Although not the most wonderful spot, at least it’s something, and we were happy to have an option, which wasn’t always the case up north. Really, this all we need, and more spots like this is preferred to all the privatized camping on the North Island that we paid for almost nightly. Hopefully, more options like this will be developed up north to solve some to camping difficulties with so much private land, residential areas, and towns. When we arrived Angelynn, Sylvan, and Tane were there. 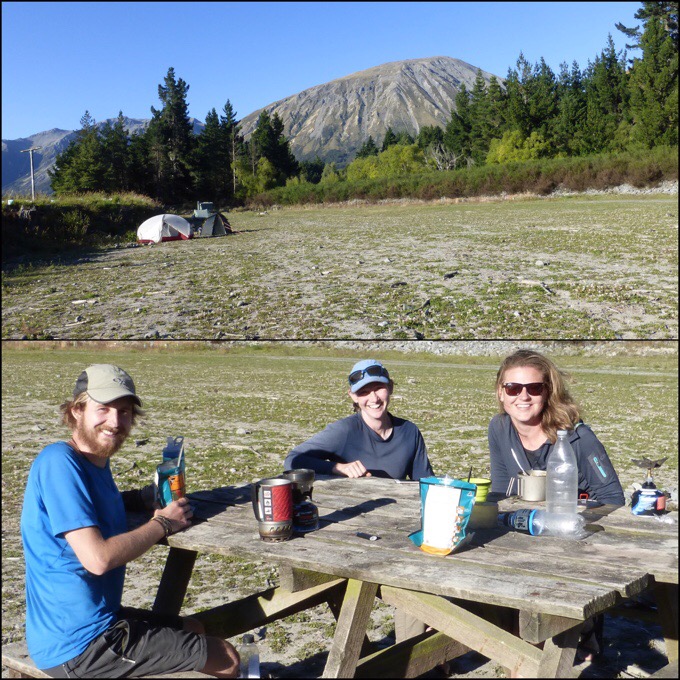 Sylvan and Angelynn. Tane is not a photo person.

It was nice to get an earlier night and finish up all my blog stuff before I fell asleep. I have missed my tent and think I’ll sleep quite well tonight. Griggs has the ZPacks Duplex, which is the two person version of my Solplex. Many are opting for that option because it’s just a slight bit heavier for a lot more space and two sided entry. It’s like a mansion! 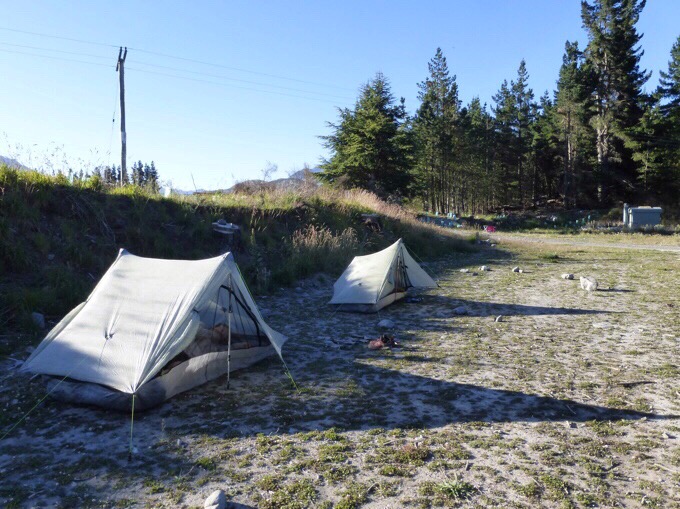 Ok, it’s now 9:30pm, and I’m going to sleep. We now have 7 hikers here as Jeff and Lee arrived about an hour ago. There have been some cars come by as well because there are lakes nearby and this seems to be the designated camping area. It is a Saturday night, so there’s been some come through, but I’ve been too lazy to look out and see if any of them stayed. Thankfully, the wind is dying down a bit. It’s not a sheltered camping area and it was pretty windy today. We plan on getting an early start, so it’s nice to get to sleep early.