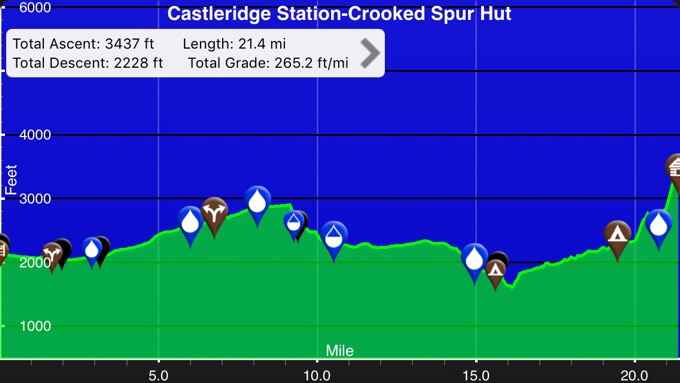 I slept great last night. Man, I love sleeping in my tent. We made a great choice of camping in the shelter of the trees too. I woke refreshed at 5:45am and we packed up and started at 6:30am. It was a nice morning with views of rain in the distance. We knew it was supposed to rain overnight tonight, but we’re moving fast already feeling sporadic drops every so often. 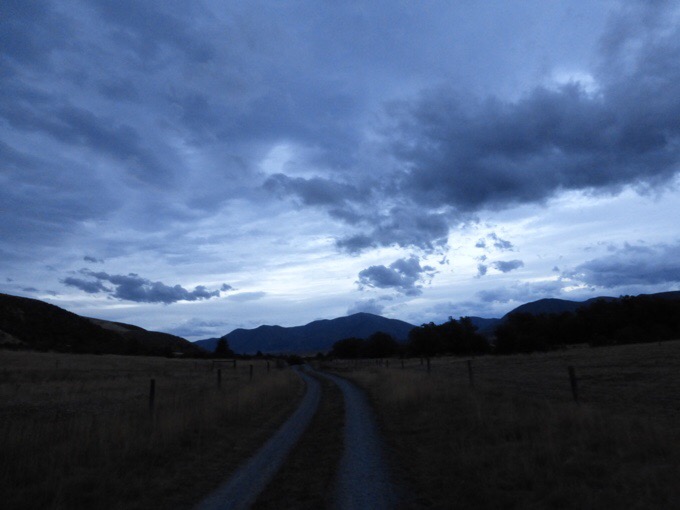 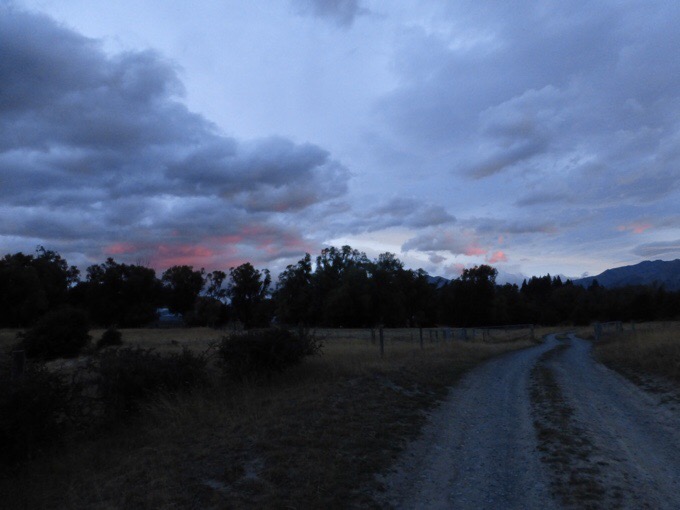 It was a relaxed cruise for about 9mi/15km to Lake Clearwater. This is where hikers need to hitch if they are not crossing the Rangitata River. In most years, hikers are able to cross the multi-braided river, but with all the rain the last couple weeks, it is still high and hikers are doing the difficult, multi-pieced hitch around it. 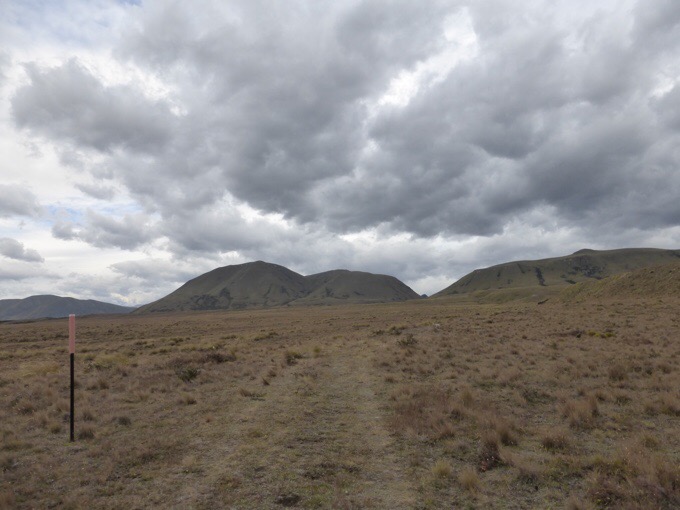 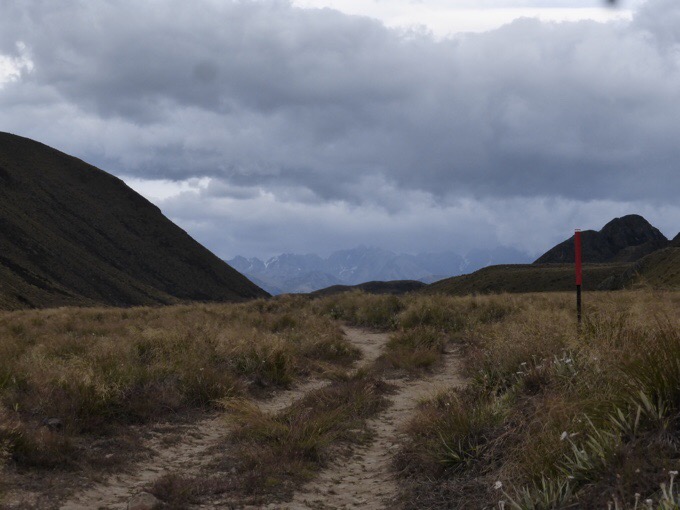 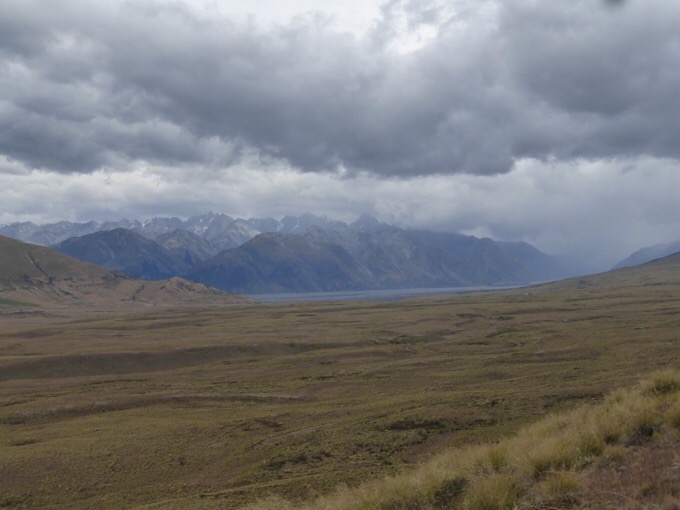 We took the 5km side trail at Lake Clearwater to come out just outside of the small Clearwater Village along Hakatere Potts Rd. 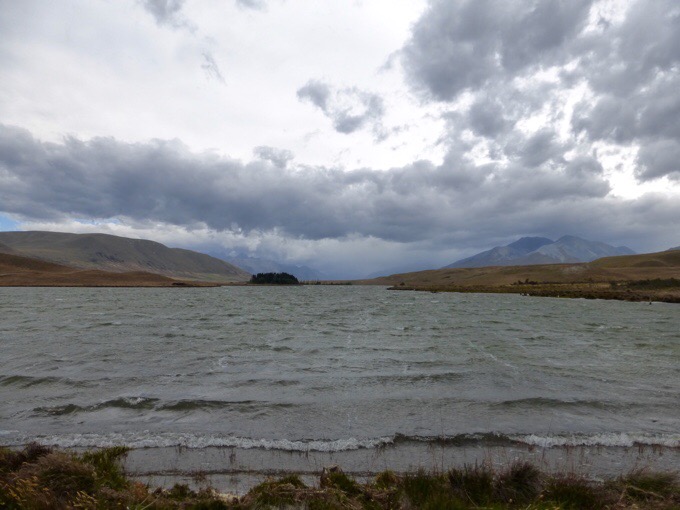 The wind was really strong, so we found a rare group of trees next to the road and sat down knowing it may be awhile. It was 10:30am, and we started the timer. Walking across the Rangitata would have taken us possibly 3-5hrs depending on how high we would have walked upstream. We heard that hitching around could take over 24hrs with how remote the hitch is on the far side is to the Two Thumbs Track. The goal was to catch a ride with someone leaving Clearwater Village. A few cars were driving into the village, but none were coming out. One car drove by, but were just going to the neighboring lake. About an hour after starting, a retired couple with a vacation home in Clearwater Village drove by and we had our first ride!

They took us to the tiny town of Mt Somers about 25mins away. There, we stopped at the one local shop and gas station and got some food. I got a chocolate milk to have with my lunch and was a happy hitcher. While there, two other TA hikers showed up trying to do the same hitch, but from Methven having chosen to skip the last couple days we’d just hiked. We hiked down the road to the highway to start hitching while they ate so we wouldn’t be overlapping. They warned us another couple was already there trying. It turned out to be Steve and Amelie who said they’d already been trying for an hour. It seemed a car drove by every few minutes, so it wasn’t too dead. Griggs noticed another road entering the highway about a km down, so we walked down the highway to that point hoping spread out from the others and also increase our chances with a side road that seemed to feed possibly more traffic.

It was sunny and hot, and we stood there about 30mins with quite a few cars driving by. Most of them were camper vans not stopping. The two other guys hitching walked up apparently having the same idea as us and walked on down the road to spread out from us. We knew getting to our next location of Peel Forest as early as possible was key because that’s where next to no one goes. Most hikers have to wait until 11am the following day to get a ride out to the Two Thumbs Track from the mail carrier. We really didn’t want to waste 24hrs and hoped to get lucky.

Well, Griggs’s strategy worked! We got a solo male tourist to pull over from that side road that we purposely walked to hoping to increase our chances. Peel Forest is 8km off the main highway, and he kindly took us even though he wasn’t headed that way. Score! He dropped us at the Peel Forest store where we found out that we needed to go another 5km down the road past the campground to get a better chance at the final hitch to the remote Two Thumbs Track. I saw a local guy getting in his car and quickly ran over and asked for a ride. He wasn’t going that way, but since it was a short distance took us anyway. Score again! People are so nice!

So that had us sitting in a very remote gravel road that had next to nothing on it. Some people use it to go down to a sheep shearing station in Mesopotamia, and then there is the Two Thumbs Track about an hour away that seems to rarely be done as well. It was 1:30pm, and we decided to give it a shot since we had nothing else better to do. I sat on my sit pad and popped open the umbrella ready for the long wait. Just as we sat down, a car drove by before either of us even had time to react, it was so unexpected! We kicked ourselves and were more alert. About 30mins later, another car drove by with four adults in it. We waved them down and convinced them to take us the short distance they were going to see an old church that had been damaged in the Christchurch earthquake years ago. It was a family just taking a day to drive down the valley and enjoy the sights. Within minutes of talking to them and explaining what we were doing, they agreed to drive about an hour each way out of their way to take us all the way to the end of the road! Amazing!

They were so awesome to do that for us! We offered them money since we would have paid for a shuttle and overnight camping if it wasn’t for them, and they didn’t take it. They said they enjoyed the drive. Along the way, we stopped at a farm that seemed to raise these massive elk/deer hybrids. So funny to us that they are farmed out here with how many we have in the wild in the US. They were huge. 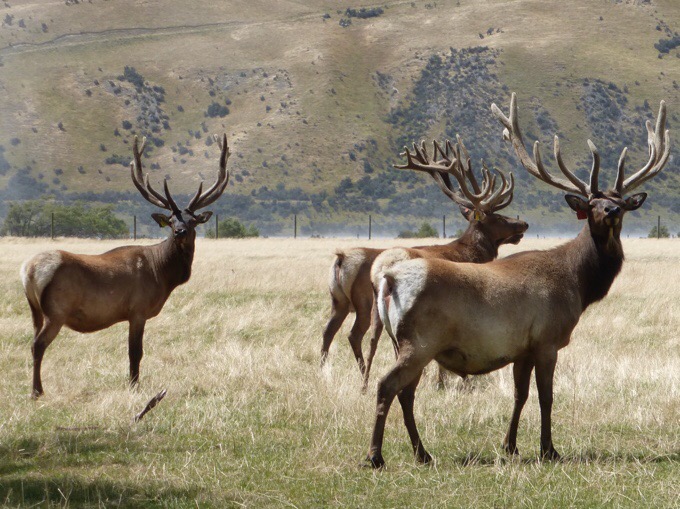 It was a great drive, and we were hiking again by 3:30pm, 5hrs after we started hitching, whew! That is a very rare hitch and we totally pulled it out. That was key for us because we knew rain was coming overnight and we wanted to make it up another river valley with many crossings to a hut for the night 6mi/9km away. 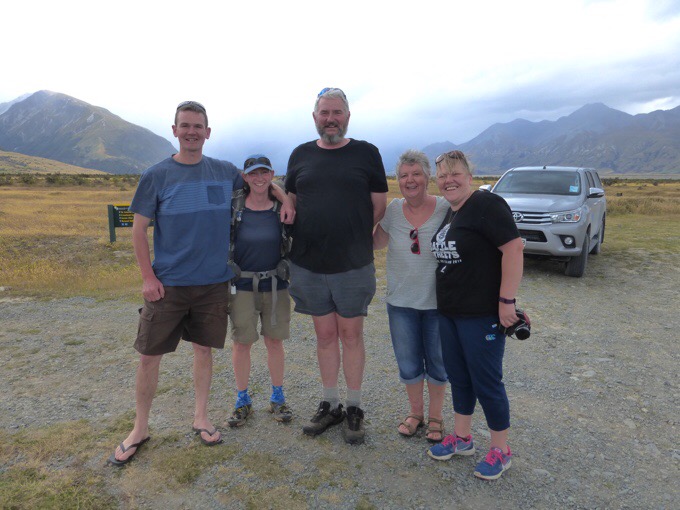 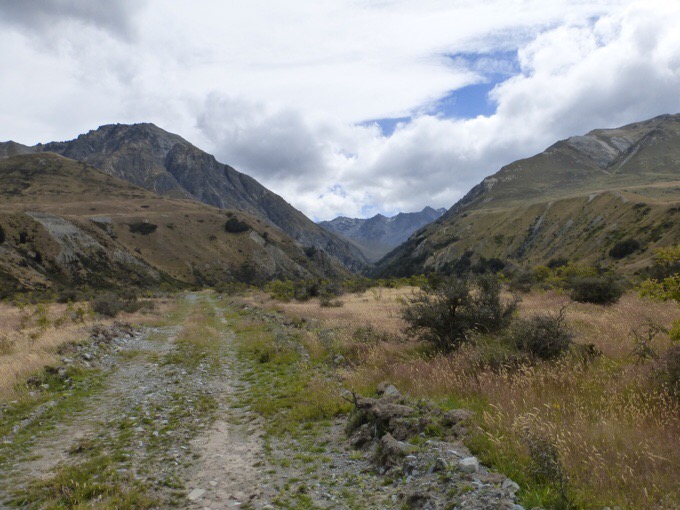 Not long after starting to hike, I felt like something was missing. I ran through all the possibilities of what I could have lost. I almost left my poles at the store and almost left my umbrella in the last car, but had those things. Still my pack felt different. Then I realized what it was. My sit pad that is also my back pad on my pack! It was gone! Shit! I had been sitting on it waiting for the ride and I threw it in the back with my pack and umbrella and it must have totally blended in. Just when you think I’ve lost every item once, a new one pops up that I’ve never lost before! Somehow, the way I pack my pack, it didn’t bother me at all, so at least that’s good. Ugh. 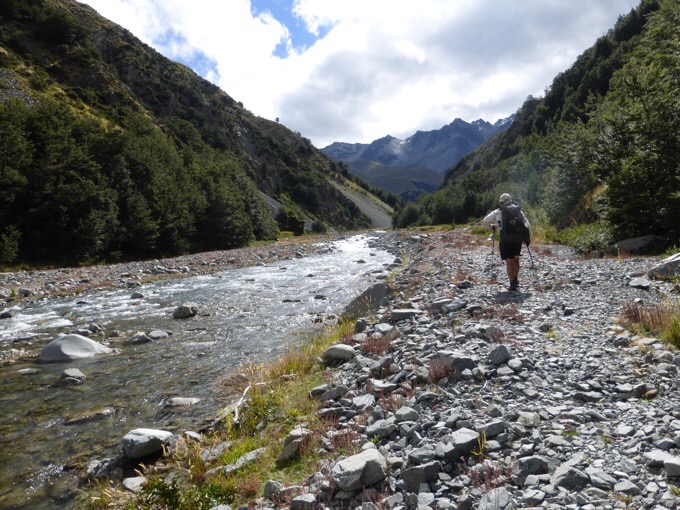 We hiked up the valley with many fords of Bush Stream. Again, it was deeper and swifter than I would have liked, but we did just fine with it. 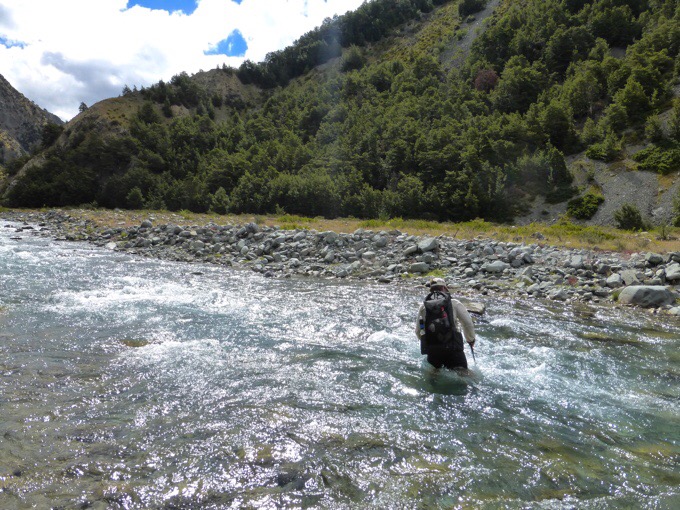 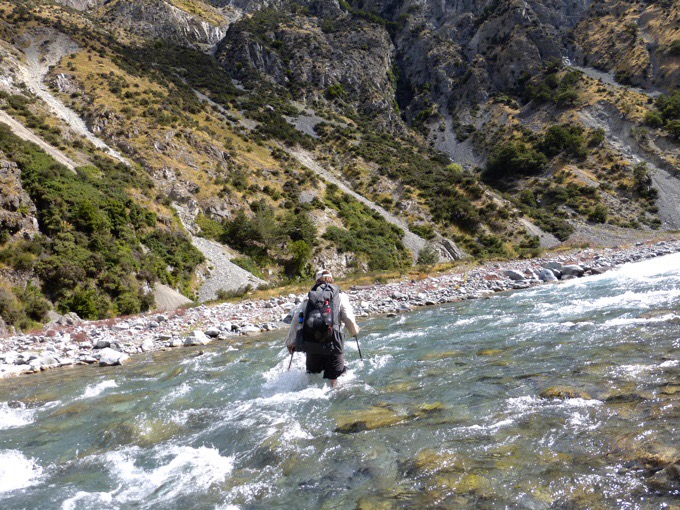 As we went up the valley, there were some steep climbs and descents, but we got some of the grandest views so far. The photos couldn’t even capture it all! 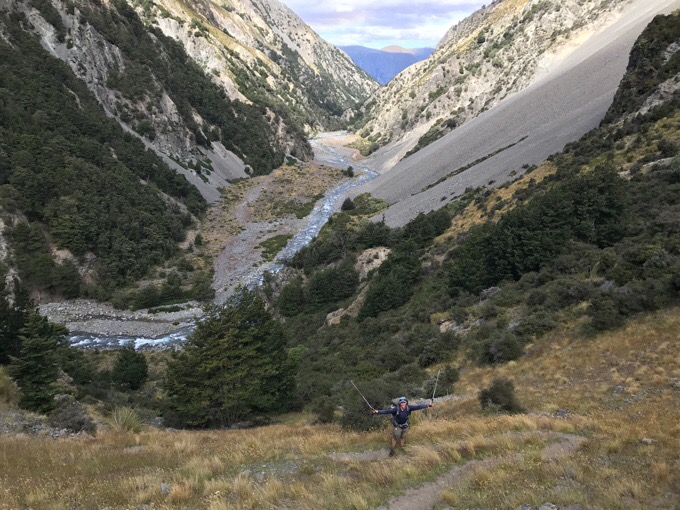 Looking back on what we came up. 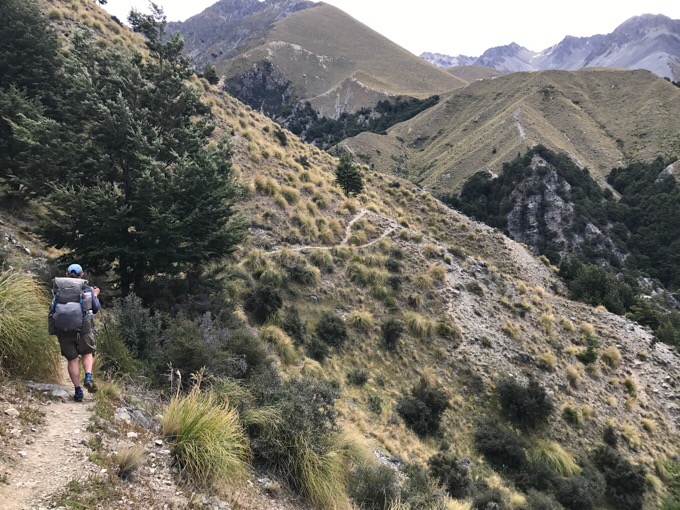 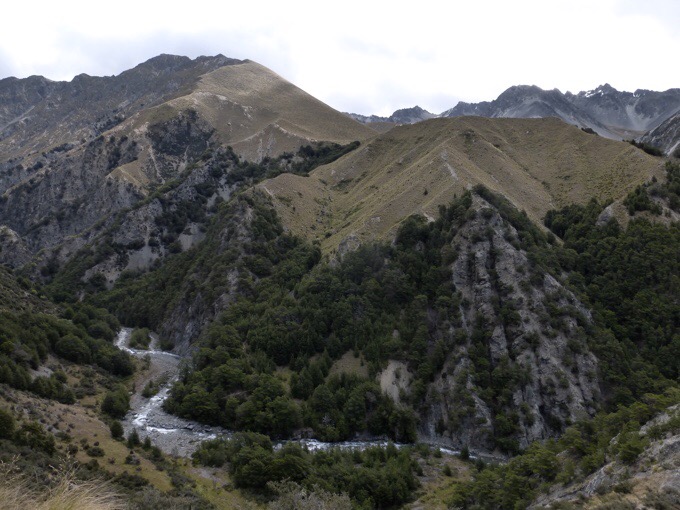 The hut is on top of the climb on the right. 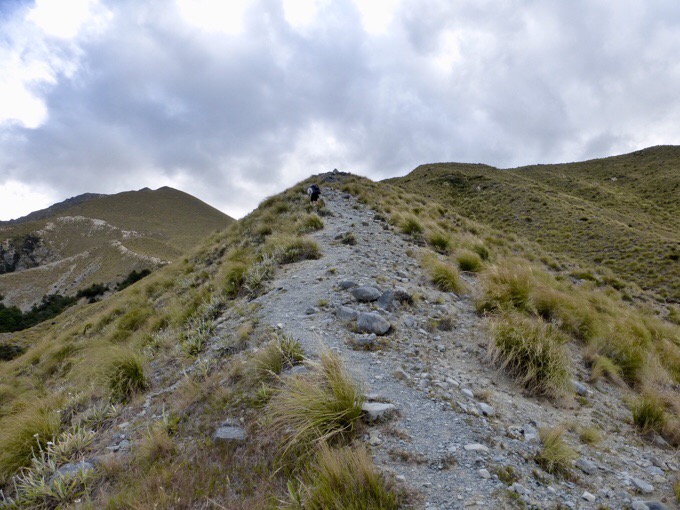 Climbing up the final ridge.

The Crooked Spur Hut was at the top of a big climb that we could see before we dropped back down to the river one last time. It looked like it was going to be in a grand setting, and we were excited to see it. 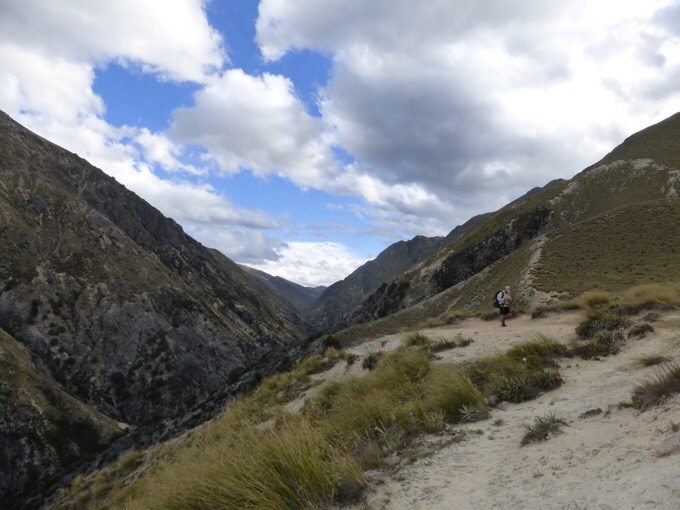 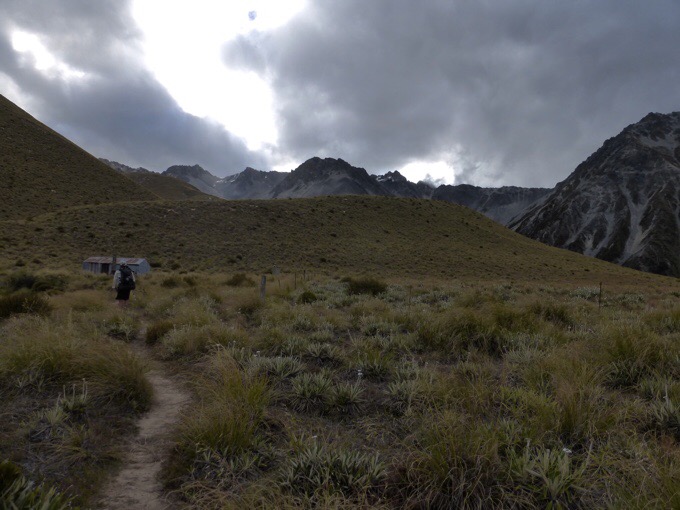 As we approached the hut at 6:20pm, it was indeed in a spectacular setting! We knew there was a group of TA hikers ahead of us that had gotten the 11am shuttle from the mailman. We knew winds and rain were coming in tonight and wondered if they would stop early or try for the next hut. As we walked up, the door opened and Felix stepped out! Felix! 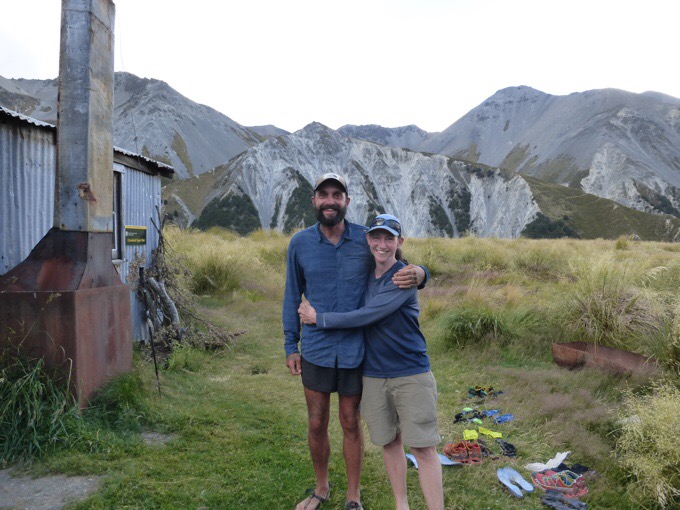 I’d been chasing him and Ned for weeks now and figured I’d just barely miss them for good once I hit Tekapo in a couple days and took some days off to go see Mt Cook. I call people ahead of me rabbits, and I was quite happy to catch this one! We started the same day, and have been wanting to hike together, but have been just off on schedules all trail. The last time we overlapped was 45 days ago on the Tongariro Crossing. So great to be reunited and it looks like Felix will join us going into Tekapo and seeing Mt Cook. The reason why Felix is here is that the shuttle out of Peel Forest wasn’t running yesterday. He had to take a zero just to get the ride out to the trail. That’s how rare the hitch is to get and how lucky we were today! Three others were at the hut. Bibi and Jasper, who we last saw at Blue Lake Hut, and a northbounder. A nice group. 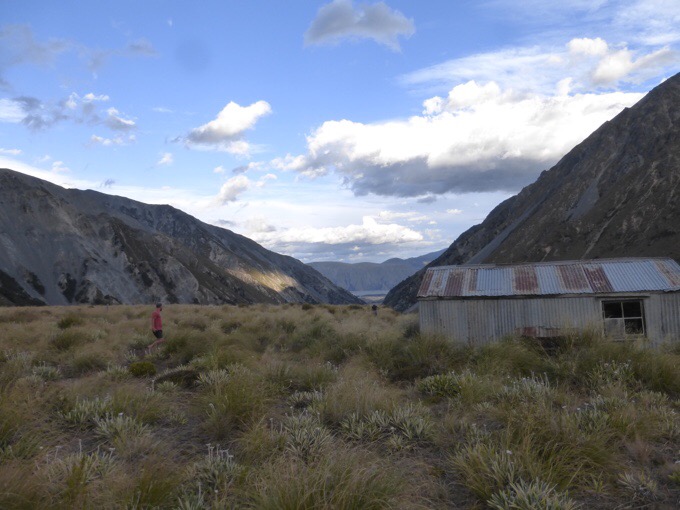 Ned isn’t here because he and Felix separated the day they were heading to Rangitata because he was going to see a side sight of Mt Sunday, which is in LOTR. Ned ended up hiking 5km upstream along the Rangitata and crossed it! He left a note at the hut that it was not braided, but one big scary swift river and he made it through. He’s tall, so I know there is no way I’d have been able to do it. Man, he’s crazy, but in an awesome way.

Ok, the rain and wind has started, and we are all so thankful to have these huts! The wind up here is so strong. We will probably sleep in tomorrow and wait for the rain to end in the morning before heading out. We so nailed this day!