February 14th
We got up and had breakfast at the B&B at 7:30am. There was a full rainbow there to greet us right out the balcony when I opened the drapes. Yep, that’s how to start a great day! 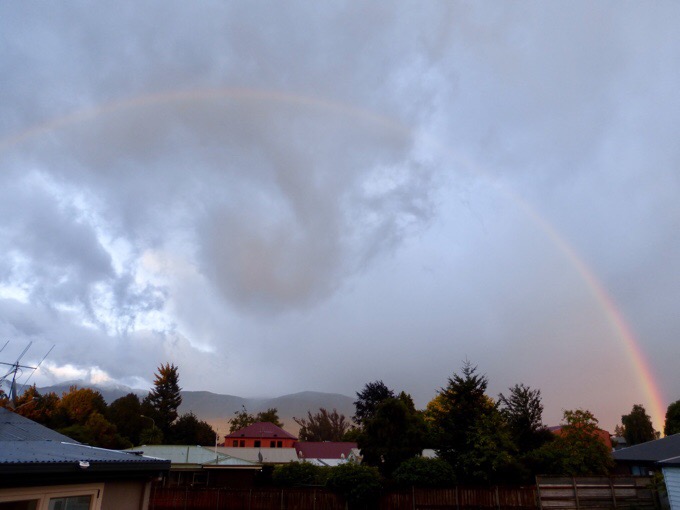 We got to pick our time for breakfast, so I intentionally picked the early one in hopes that it would get me up and motivated to do some Tassie planning in the morning. We needed to leave at about 11:40am to catch our bus nearby for the Milford Sound cruise. Breakfast was luxurious compared to what we’ve been doing staying in hostels with no breakfast option. It was pretty indulgent to wake up and have a preordered breakfast ready AND a fancy unlimited continental (even had salmon!). Oh man, I may be ruined for life by this.

Once we stuffed ourselves as much as possible, of course all I wanted to do was be lazy for the morning and be in my comfy bed and down (yes down!) comforter! We looked at our options for more side trips back up at Mt Aspiring to do after the Queenstown birthday stuff with Becky and Tom. Weather looks to be cooperating, so we booked a bus to head back up to Wanaka and will decide from there how much of Mt Aspiring we will do once that day is closer, but we think we have a plan.

Then I did get a bit of Tassie ideas organized before we got a text from Christina, the awesome owner of the Lakefront B&B. It read, “Hiya… just made some chocolate apricot and nut brownie…would you like some?” I seriously may never leave this place! Not only were there fresh brownies, but berry muffins as well. Christina seems to make a batch each day and just leaves it out with fruit in the lounge area. Heavenly!

So that ended my somewhat productive moment, and I was happy to further procrastinate Tassie planning for another day. We walked over to catch our bus to Milford Sound and were quite happy that it was a small bus with just nine people total. It was a couple hours of driving and stopping to see the sights along the way. Quite enjoyable! 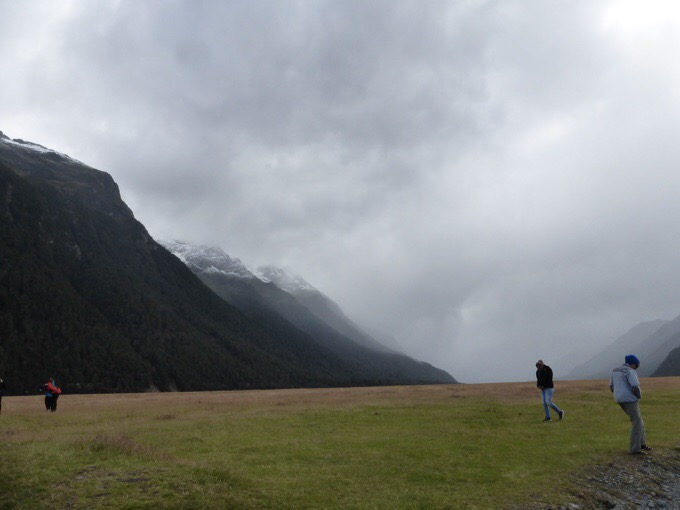 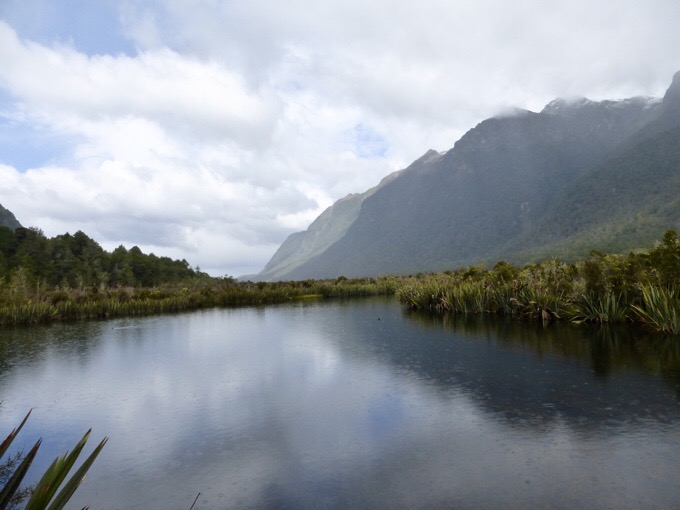 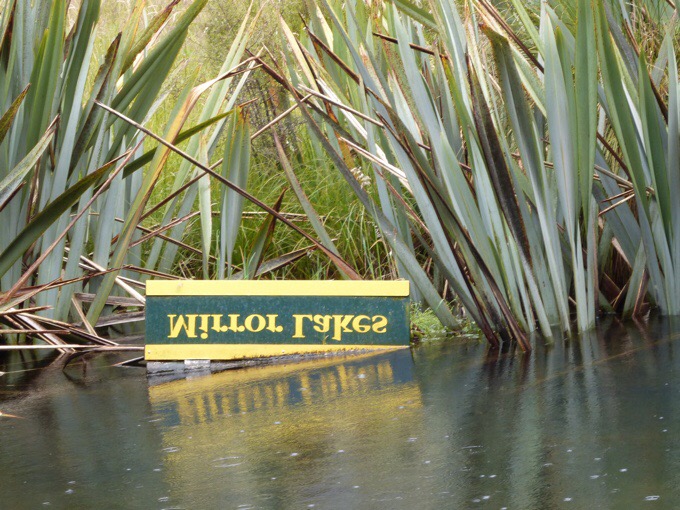 It rained on and off all day, which is why we are waiting to do the Kepler Track tomorrow. It was never heavy, and the tour company even provided umbrellas. It was quite chilly out with this front that moved through, so it was great to not be thru-hiking today. What great timing for a break! 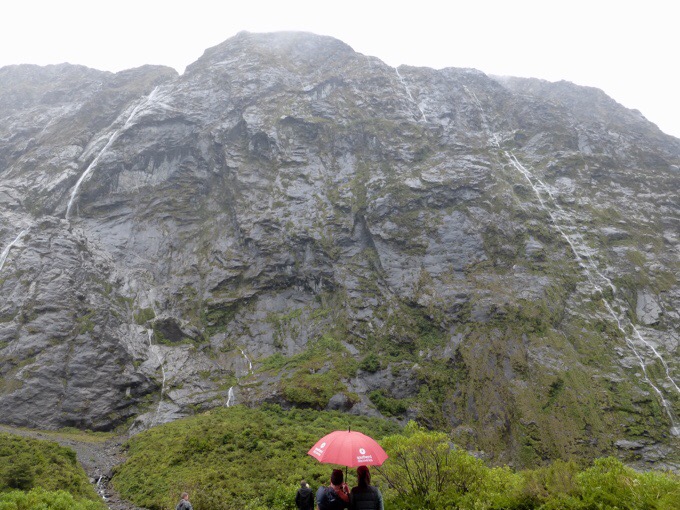 Even with the rain and clouds, the sights were great. Sometimes, these valleys are more mystical with some moody skies and clouds. I commented on how cool it was to see snow up on the mountains and Griggs had a good one saying, “Yeah, imagine that, snow on mountains in February.” It’s so weird to be here in summer when the US is having quite the cold and snowy winter this year. The granite walls were immense going straight up both sides of the road with waterfalls coming down that aren’t there when it isn’t raining. 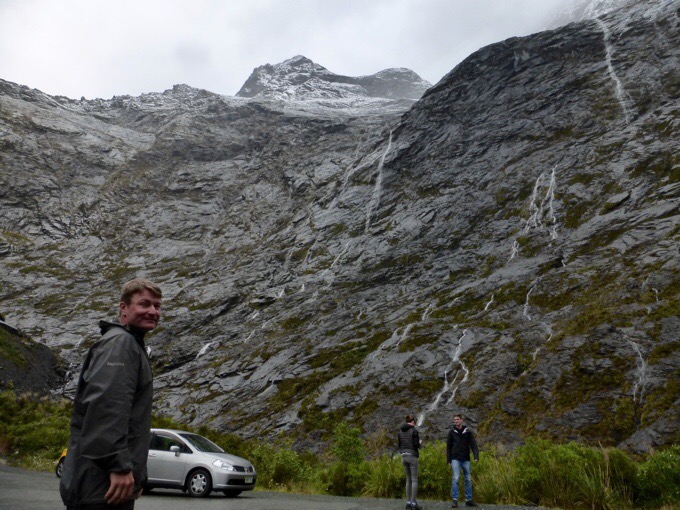 Towering rock faces of granite all around. 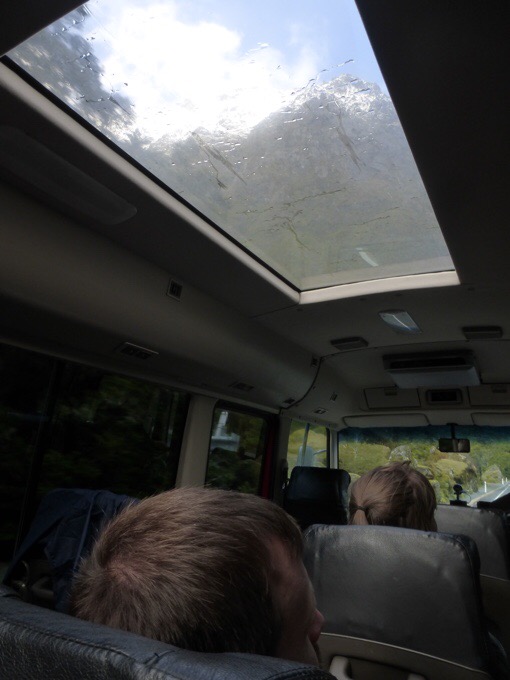 Definitely don’t let rain stop you from doing a Milford Sound tour. I heard it makes it better to have rain, and I get that now that I’ve seen it. It’s a great rainy day activity, and they said they’ve only had 5 days without rain so far this year. That’s just 5 days in 2.5 months, so expect rain on this tour and welcome it. 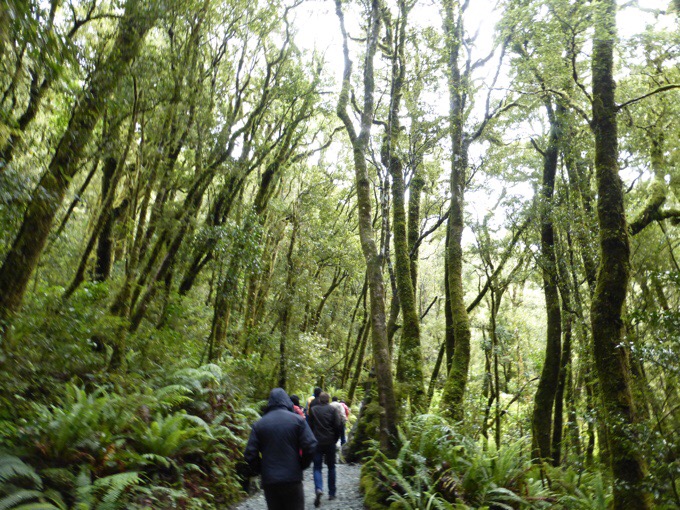 Short hike to The Chasm. 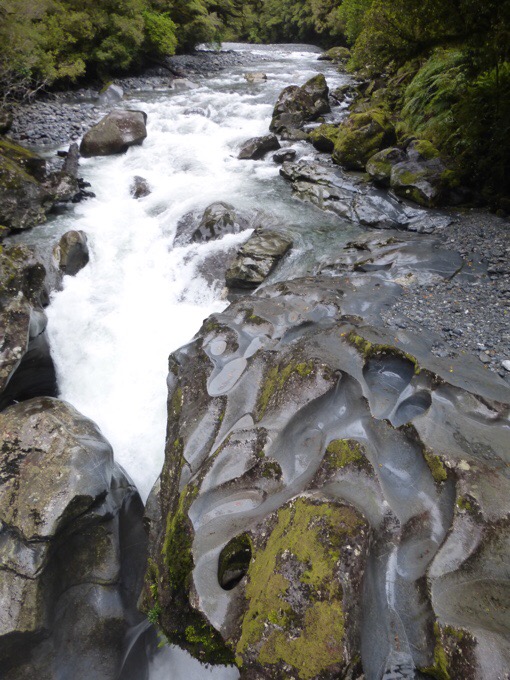 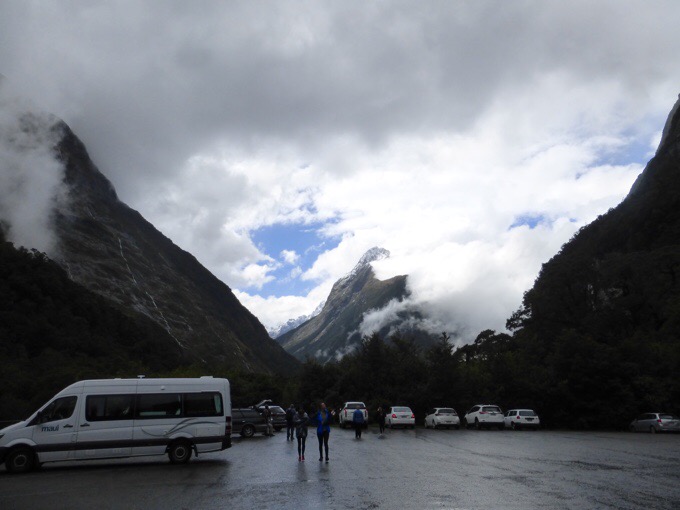 The boat tour goes into Milford Sound, which is actually a fiord with steep cliffs created by glacial erosion. I had low expectations given all the waterways we’ve gone across on the TA already, but it really was quite grand and well worth the visit. All the tours do a loop going about 30-40mins out to the Tasman sea and back. 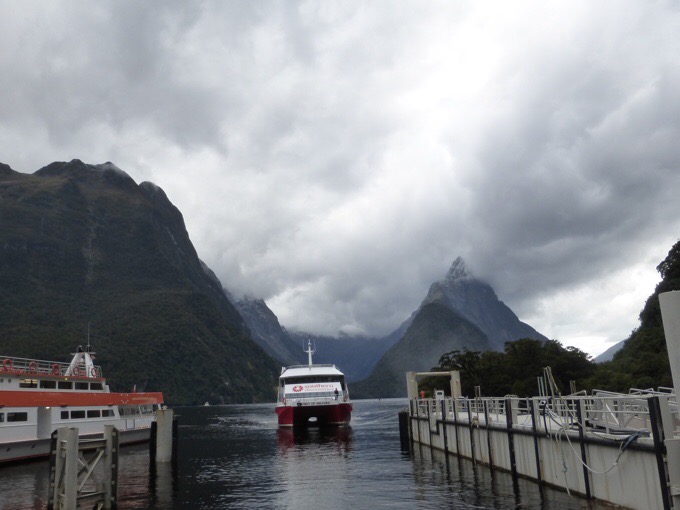 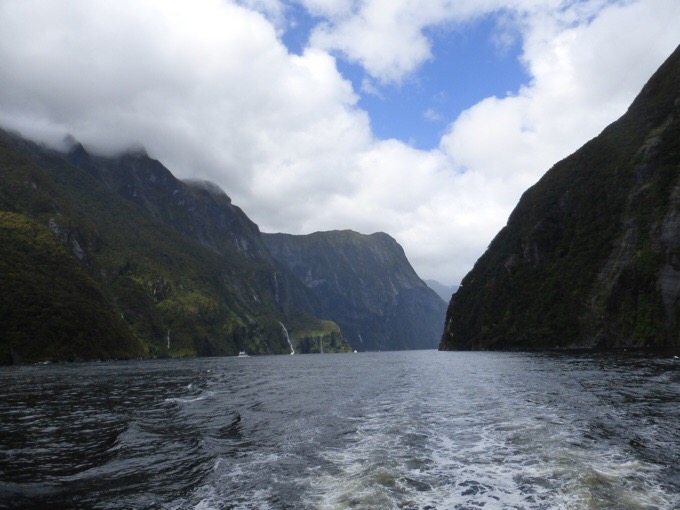 The rain came and went while we were out there and there were many options for being inside the boat, under a covered area outside, or up top. Since we were on the lesser used later afternoon slot, our boat seemed to only be 1/4 full, so we got to easily walk around and rotate depending on the weather and views. It worked out really well! 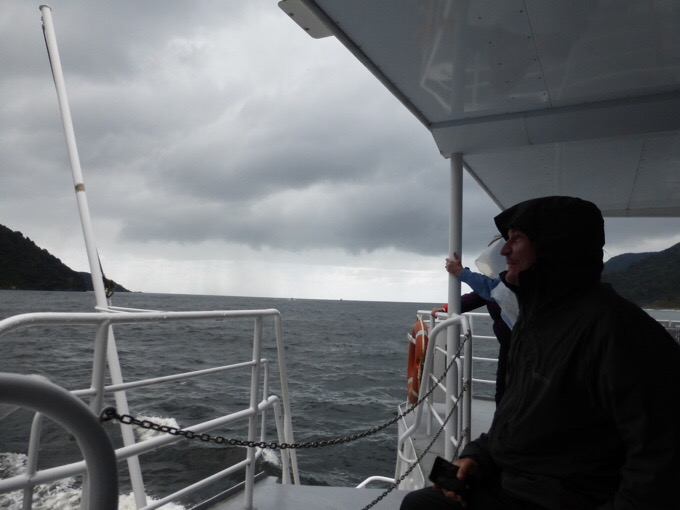 Tasman Sea in the background. 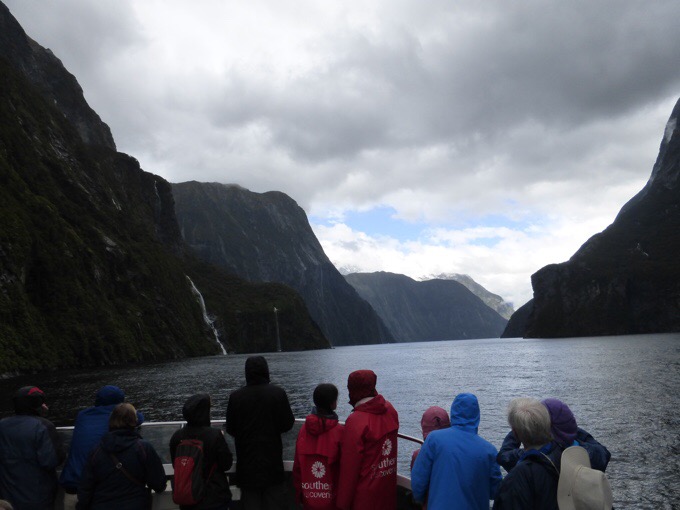 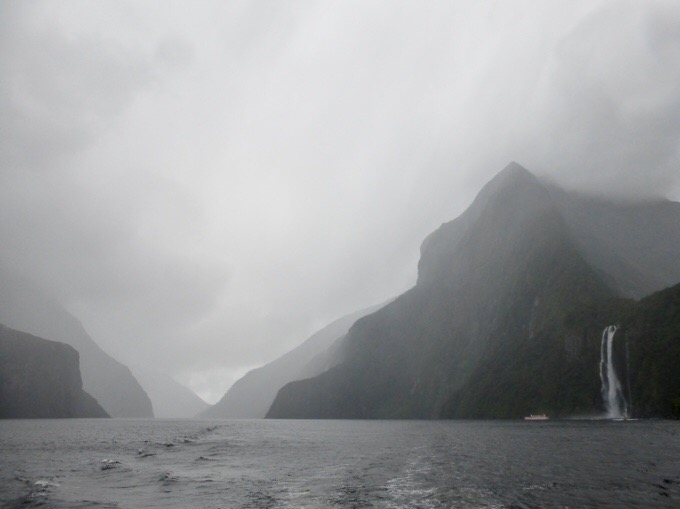 Ours was the Nature Tour with Southern Discoveries, which may be the most basic. It was just $120NZ/$90US for the bus, side stops, and boat ride and well worth it in my opinion. There are options to add longer tours or even kayak if people like. I felt like ours was just right for us. All of the tour boats go right up to Stirling Falls and give tourists the opportunity to get up close and personal with the 509ft/155m waterfall. I’ve attempted to embed a video I took… 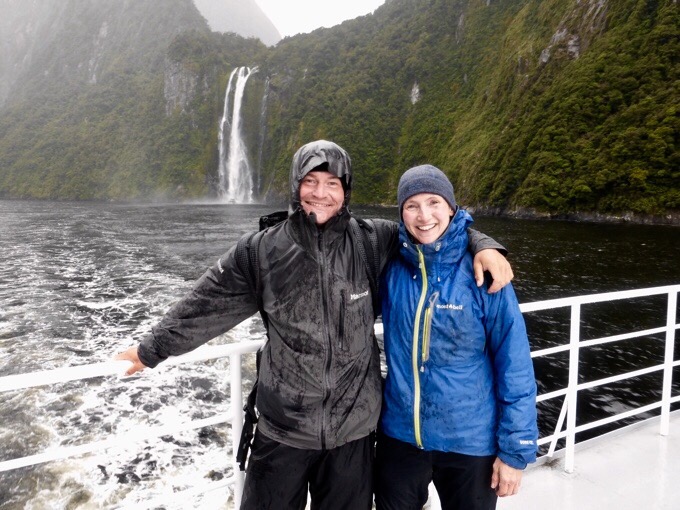 A little wet after Sterling Falls (behind us). 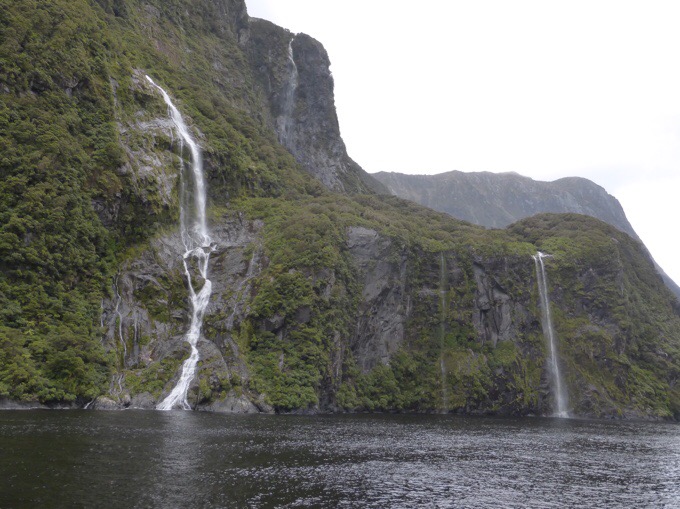 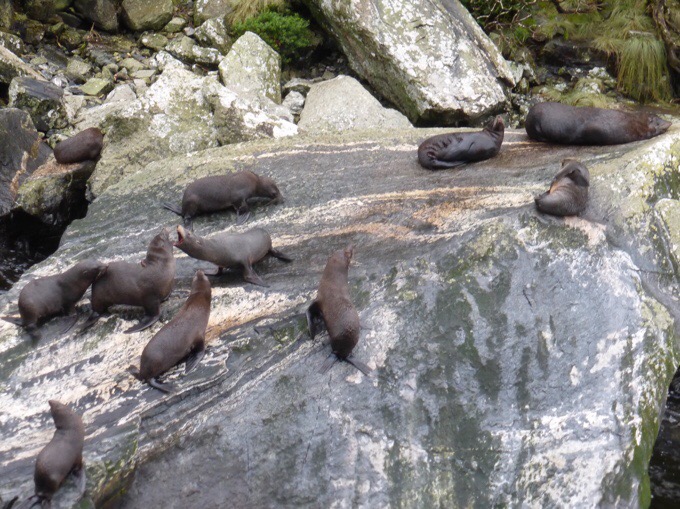 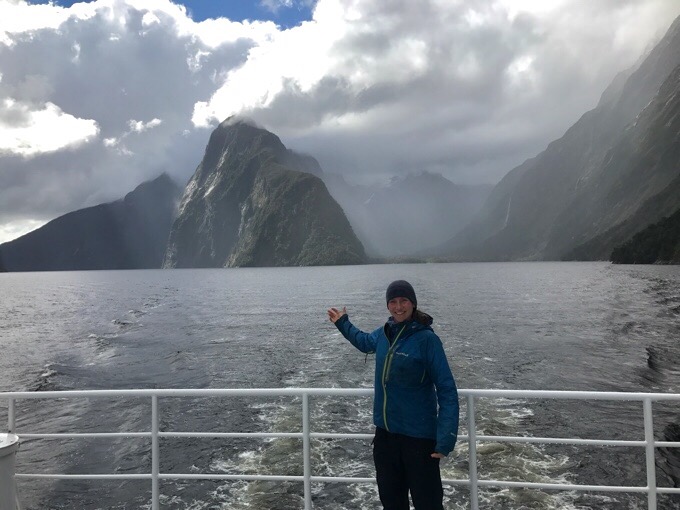 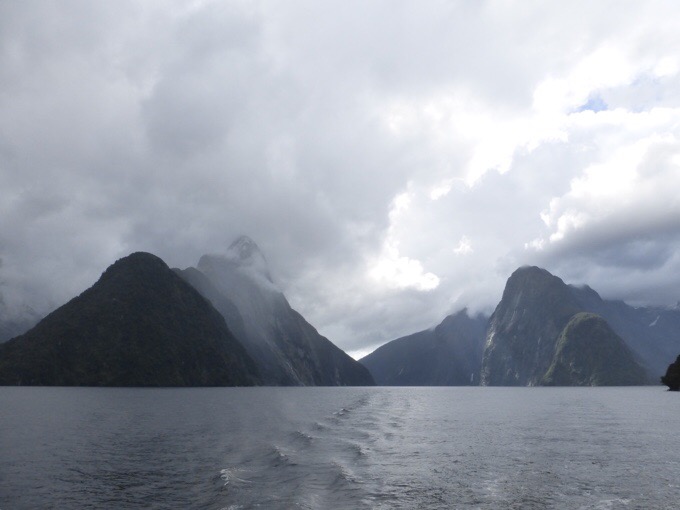 We got back to town about 7pm, and as per usual, after that much time on a bus, I was too motion sick to eat dinner. It passed after a couple hours, and I was able to eat the fruit, muffins, and brownies at the B&B, yum! Griggs ate a brownie in his bed and commented that he felt like a character from Sex In The City, ha! We are so spoiled right now.

Tomorrow morning, we start the Kepler Track, which is just a five minute drive from here, and a loop hike that we will do in two days. It is one of New Zealand’s 9 Great Walks, so we have a campsite booked for the halfway mark. Two relaxed days ahead with pretty good weather! Let the side trips continue!