Day 115: Powering Through The Takitimu Forest 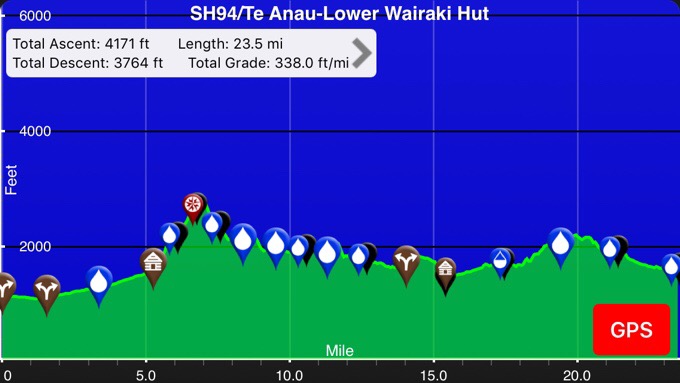 We woke up around 7am and got ready to go. Griggs went out for breakfast while I was in the mood for something lighter and had a banana and a bar. I got to Skype with my nephews before we headed out, and that’s always fun. It’s still so surreal to me that I can visit with them like that and be so far away. It was Sunday morning, so the small town of Te Anau was pretty quiet. We needed to hitch back to trail 19mi/30km, so we walked to a good spot after a gas station. After about 20mins, a young woman pulled over who was traveling here from Ireland. I had one other hitch a couple months ago from a woman from Ireland and I could have just let her talk the whole way. Mental note for me to change my Siri voice to a woman with an Irish accent:) I mentioned to her that my twin sister has the very Gaelic name of Siobhan and she said her name was Siobhan! What a great omen to kick off this leg! Siobhan has even entertained the idea of doing part of the PCT, so it was also a great crossing for her as well.  I was pretty pumped when we got out of the car. 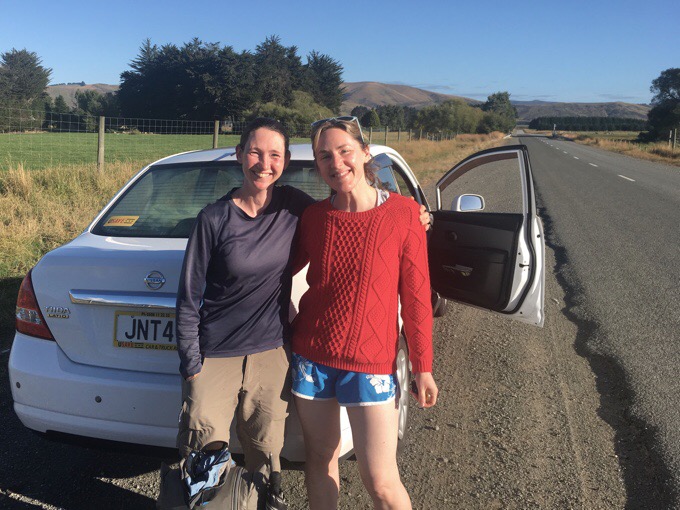 Our hitch from Siobhan from Ireland.

The first hour and a half was more gravel road walking to a trailhead for the Takitimu Track. 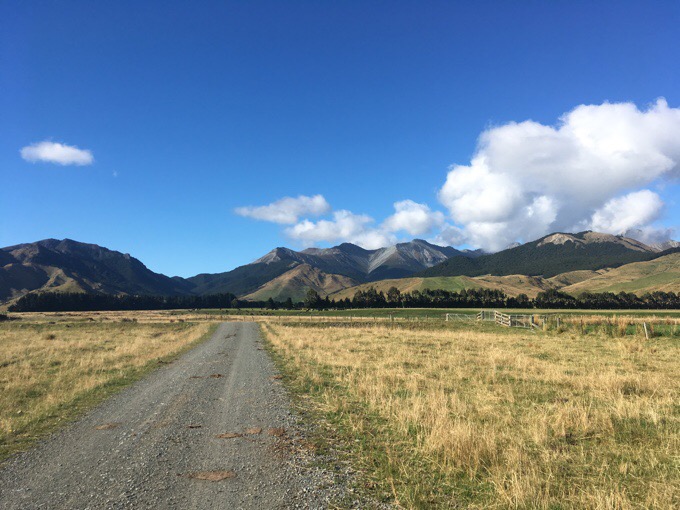 We knew this one would be a little slower going, but were quite shocked to see the time estimate on the sign for our anticipated destination tonight. It said it would take 16hrs! Usually, we can do about 30-50% faster than the signs, but this one was a bit concerning, and we readjusted our expectations for the day. The track notes had it written for 11hrs, and it was already 11am. We still had slight hope of making our intended destination, but I openly said that I accepted defeat and was ok with adjusting our plan for this leg. We hiked on and decided to just see how the day went. 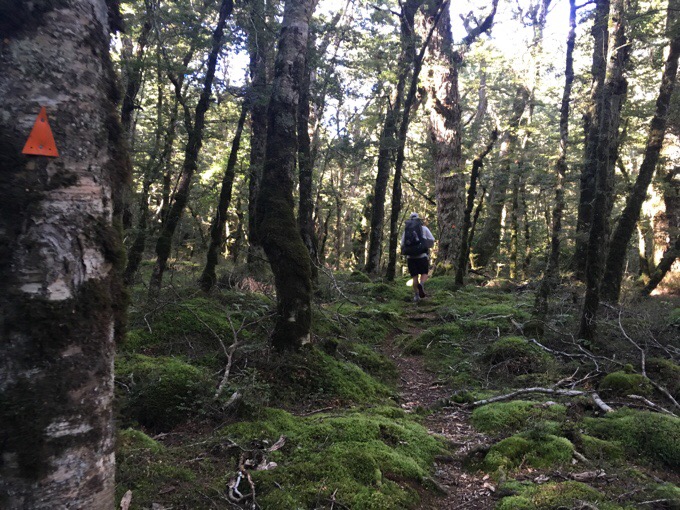 Fortunately, it hasn’t rained much here in quite awhile, so the trail was quite consolidated where it could have been muddy. The problem was that it was really brushy with these thick ferns that were not soft. It was not enjoyable at all to push through it and feel it scraping my bare legs. It didn’t last too long, and there were also sections with slippery mud and narrow trail along edges that were slow going. The TA just had to make sure to get in one more of the classic frustrating forests before we finished. 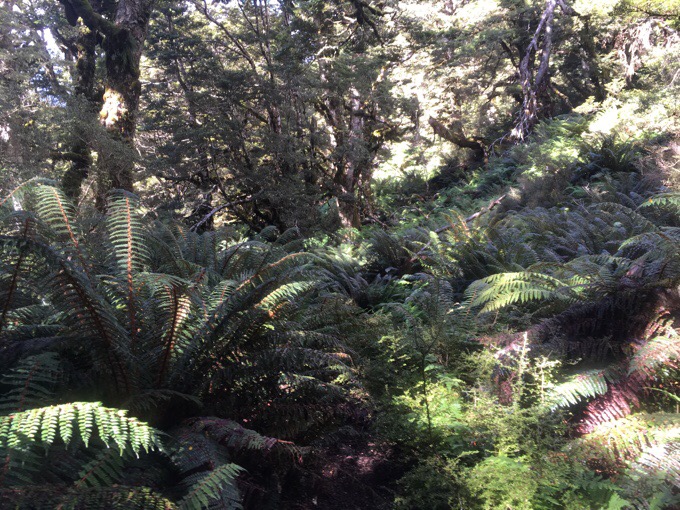 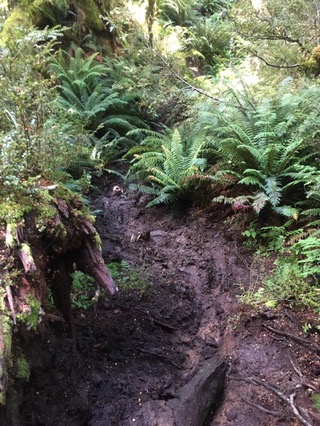 There were breaks in the woods, and we were treated to head high tussock where we couldn’t see our feet. I’ve never been so happy to see tussock! Griggs got to it first at the top of a wooded climb, and all I heard was a big bellowing voice exclaiming, “Free at last, free at last. God almighty, we’re free at last!” Haha. 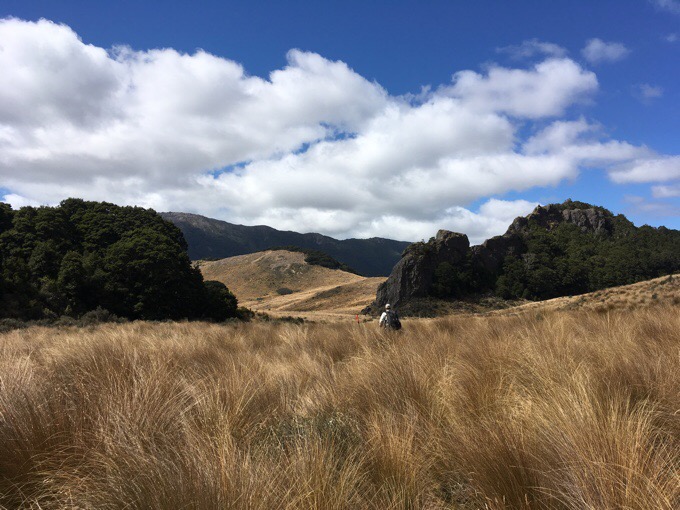 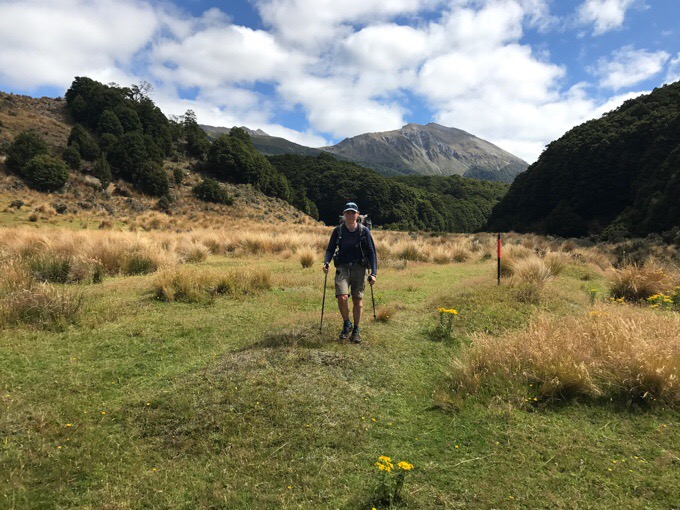 Along the way today, we overlapped with another TA hiker from France named Josephine. She is an ultra runner and this is her first hike. She’s keeping an amazing pace for the whole hike and was able to keep pace with us much of afternoon. It was fun to have someone new to talk to. She has a goal in life to walk the widest lengths of the world’s 50 biggest islands. Once to Bluff, she will have completed her third with Great Britain, and then then North and South Island. Pretty cool life goal to have! 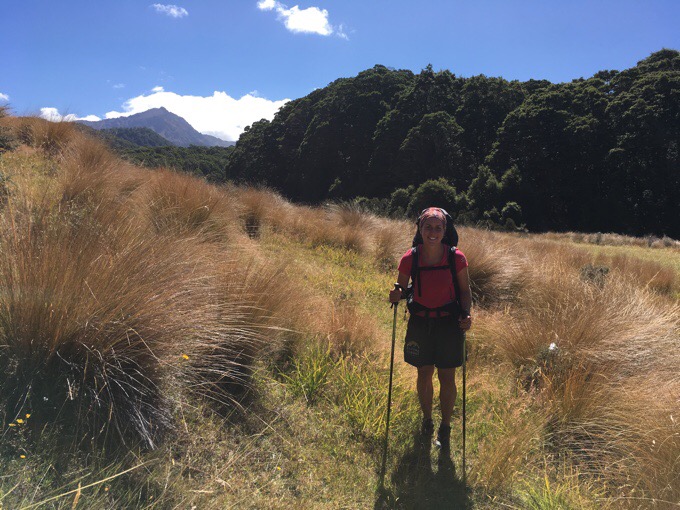 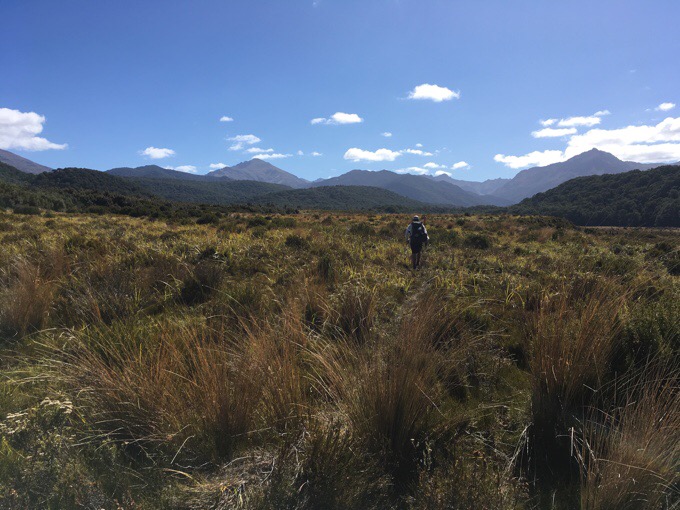 We made it to the Aparima Hut pretty early around 3pm, and had a decision to make as to whether to push on to try to make the next hut. We were in the mood for the challenge and decided to kick it up a notch and go for it. The weather was a nice cool day, and we both were feeling uniquely energized, so we went for it. While heading down a short steep crumbly section, I caught my foot on a root or something and lost control. I had the worst fall I had of the hike, but somehow managed to get myself turned around before landing so that I landed on my butt and pack instead of my face. It could have ended a lot worse and I walked away with just a good bruise on the side of my calf. 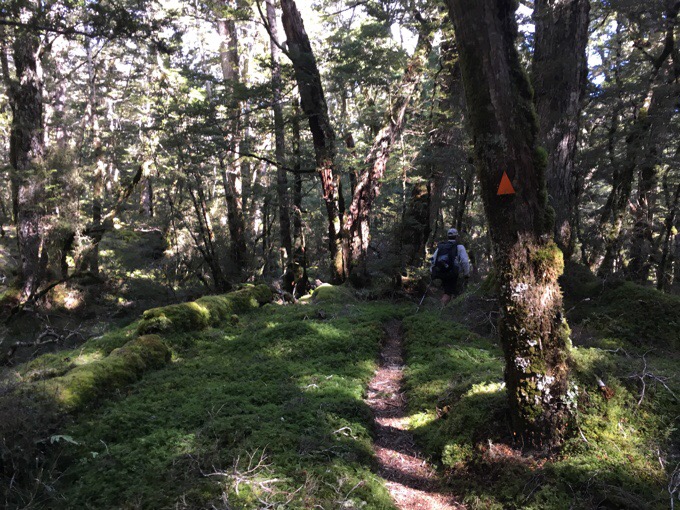 The rest of the day was in a forest that the notes had as the slower half, but we got into a groove and made great time through it. We got ahead of Josephine who was doing quite a big day having started 6mi/10km back from where we started this morning. While on this section, my already broken hiking pole finally broke completely. Dang, I was hoping it would make it through Tasmania. I’ll find a new one after the hike, and there isn’t too much left that I really want two poles for anyway. I did find a good walking stick as a replacement, and I feel like Gandalf. The other one is still usable enough to use as the shorter pole to pitch my tent I think, so that’s good. 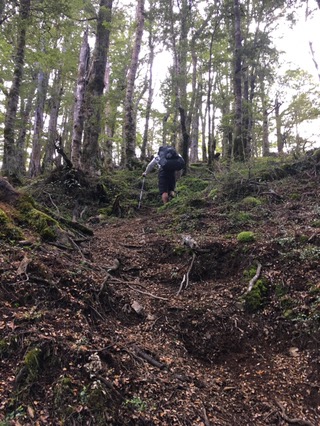 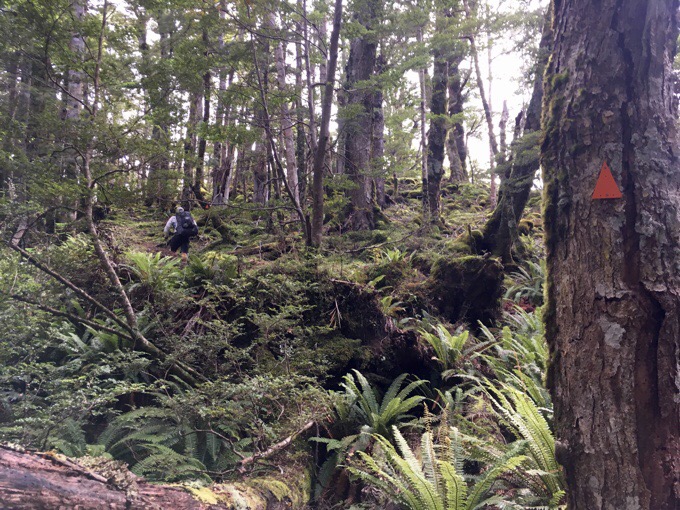 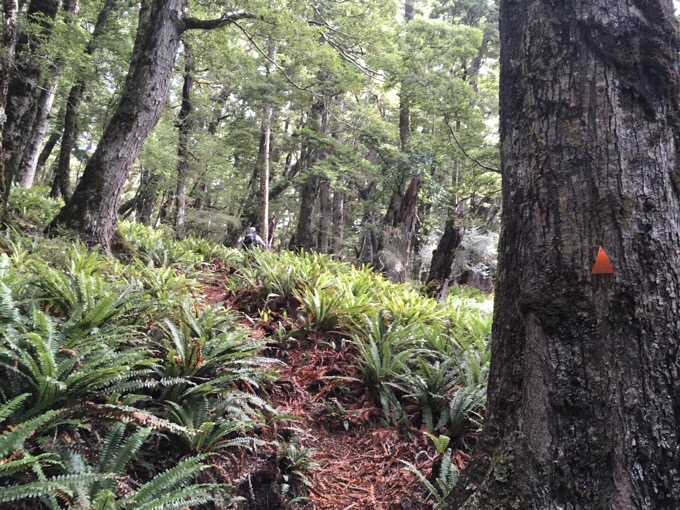 Even with stopping to deal with my broken pole and taking a bath in the stream before the hut, we made it by 7pm. It was just one of those days where we felt pretty great about challenging ourselves and each were in a groove. We got to Lower Wairaki Hut, which holds four people, and were shocked that it was empty, yay! That hardly ever happens, and we were expecting to have to set up our tents. We were happy to get the easy ending of having a bed. A very rewarding day. Josephine arrived a bit later having pulled out a 50km day, yay! She’s worried about mice (there are a few running around) and understandably chose to camp outside the hut. She said it was more than she usually averages, but like us, was in the mood to hike a bigger day today. It also positions us all well for the remaining few nights that have some odd gaps in camping. Whew, what a great day. We both are that satisfying tired that comes from completing such a challenging day. 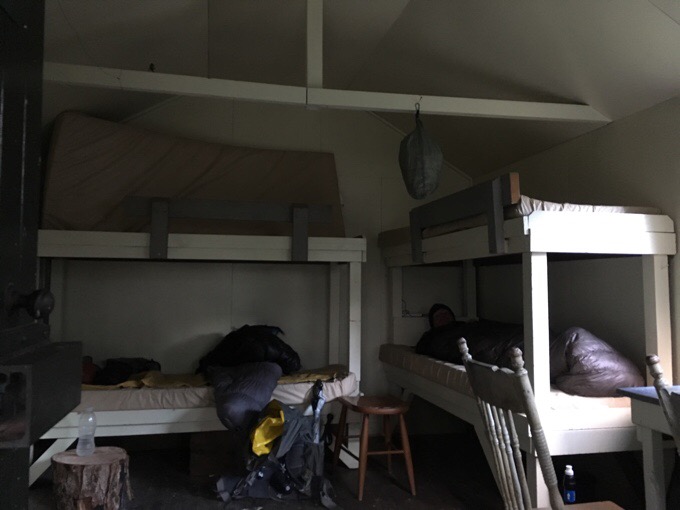