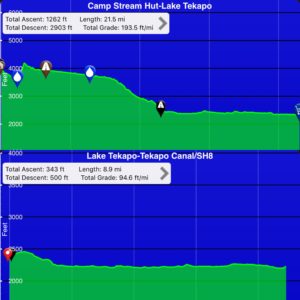 It was a great night of sleep with our tents with just a brief period of wind in the middle of the night that passed. We started walking at 6:40am. There was a brief bit of tussock and stream walking to get out of the valley, and I proudly kept one foot dry. I sometimes have a strategy of jumping on one foot in wet spots or just placing that one foot in the marsh if I can control it when there are short sections with water. I felt like it was a mini victory (gotta take them where you can sometimes) and it was a great morale boost to only have one wet foot, ha! After that, we had a great morning of cool weather and views of Lake Tekapo as we cruised into town for 20mi/33km. 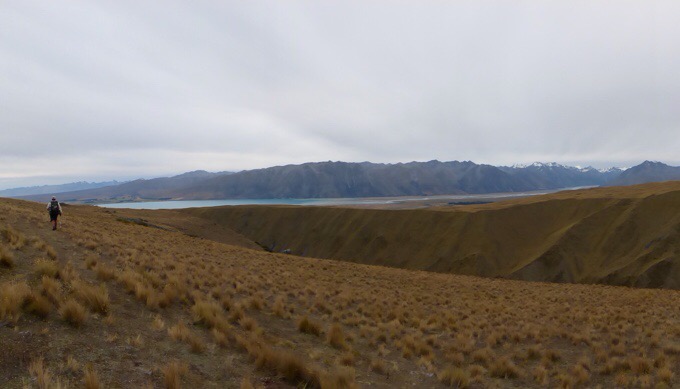 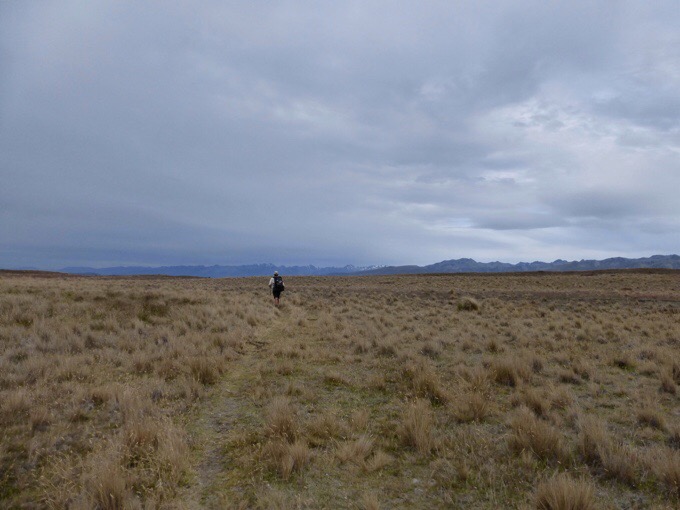 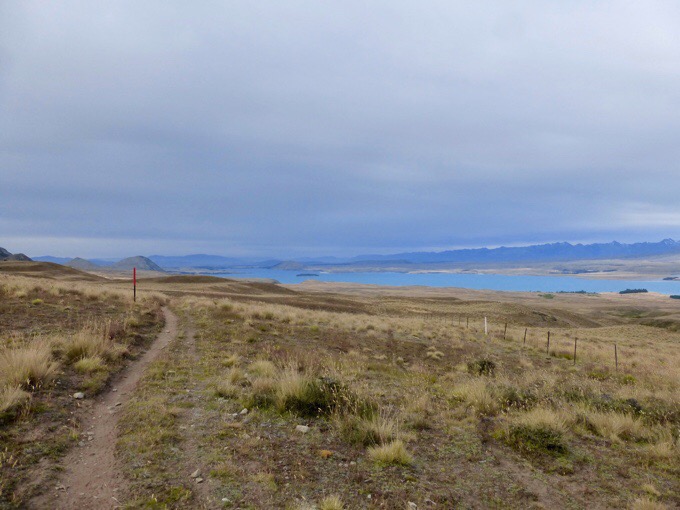 The hiking was relaxingly uneventful. I really don’t have much to say. There was service much of the way into Lake Tekapo, so I was able to get some great multi-tasking done at times. My friend E (Elisabeth), who I met on the CDT in 2013, hiked the Great Divide Trail in 2015 with, and hiked the Kings Canyon High Basin Route with this past summer with lives near Lake Tekapo in Fairlie. Our plan was to cruise into Tekapo and then have a zero with E and her partner Andy at their awesome home in Fairlie. 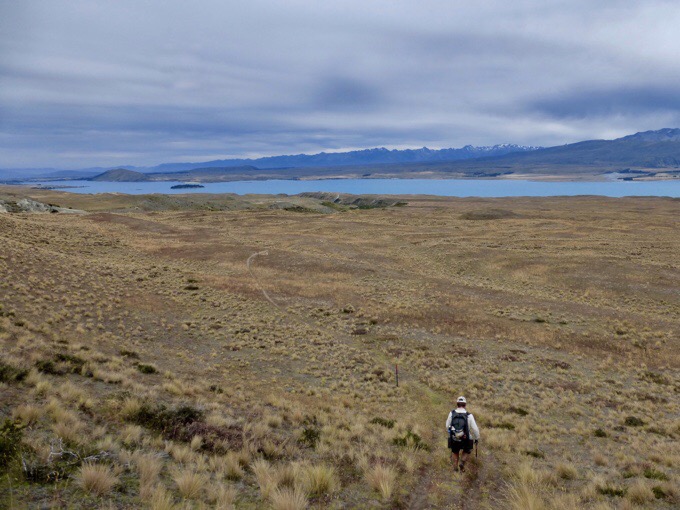 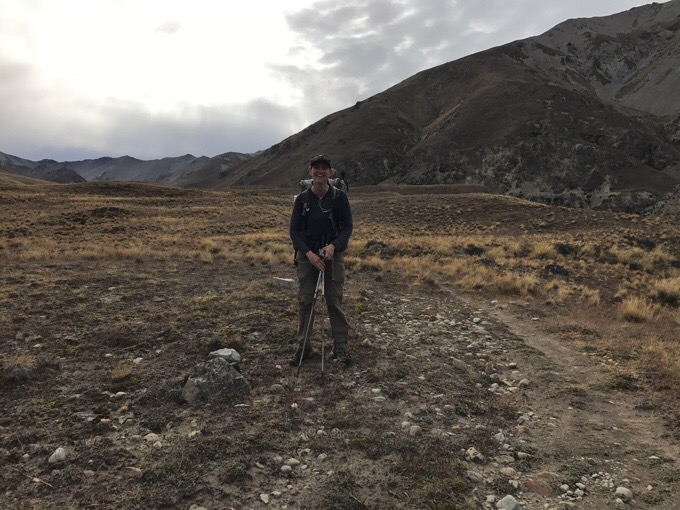 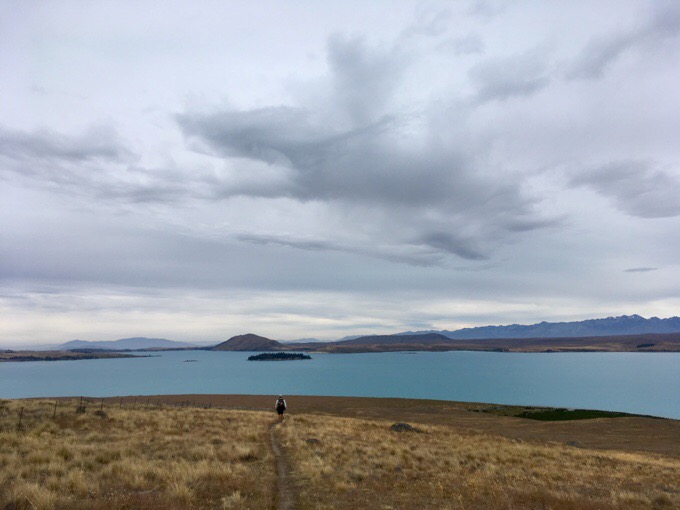 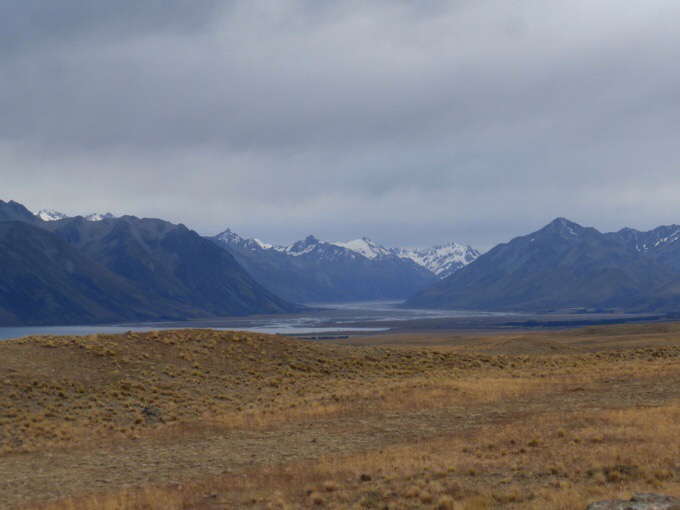 Then we hit the road into town and realized we had plenty of time to get even more miles in before E picked us up. It was a nice day, so we looked at the route and noticed that we could hike on through Lake Tekapo and go another 8mi/14km to give us a 49km/30mi day. 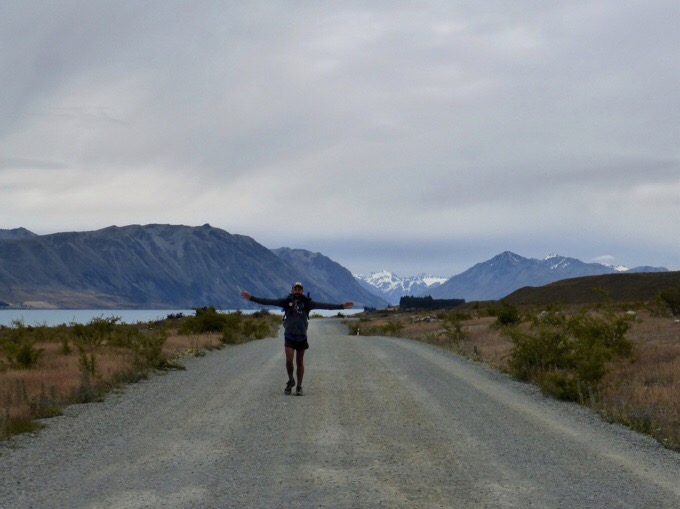 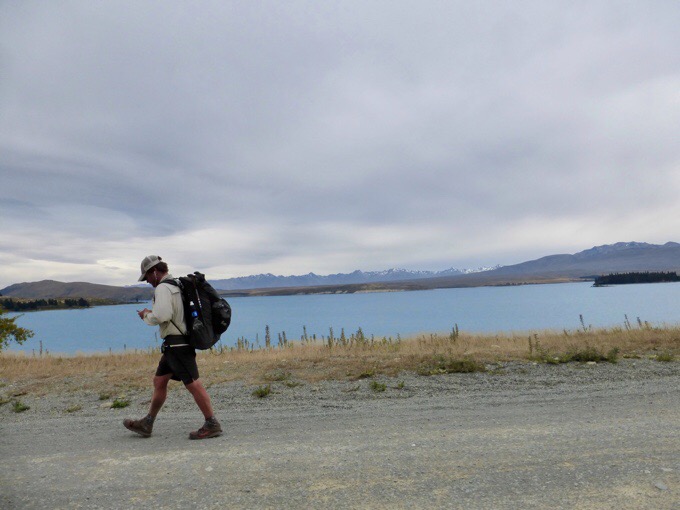 I was glad we had overcast skies and cool weather so the walk was enjoyable. It can be really hot on this stretch when the sun is beating down. Once we got past the lake, we had a couple hours of pretty boring walking that begins about 60mi/100km of what people call a “connector” section of not much. Many people rent bikes or hitch around this section because it is so flat and apparently boring. We all have forms of entertainment with music, audiobooks, podcasts…and I even watched 2.5 episodes of Mozart in the Jungle while walking today. I know, that sounds terrible! Hey, I’ve been doing this for over 7 months. I have to change things up sometimes and it made the time go by great! When we hit the town of Lake Tekapo, we were back along the lake and around tons of tourists with nice views looking back on the mountains around the lake. 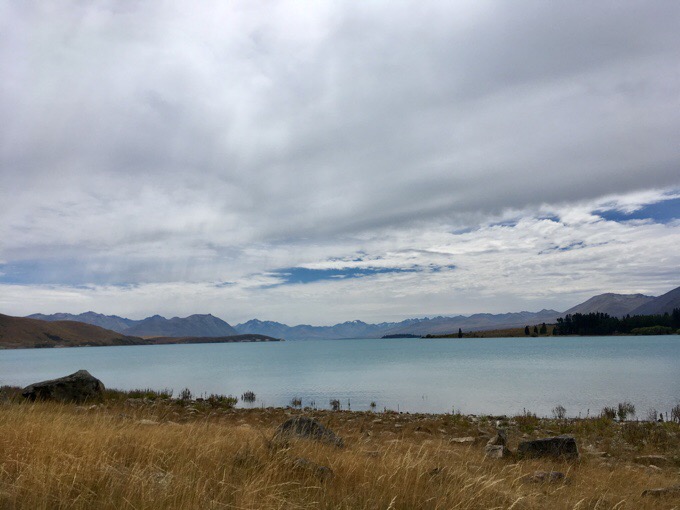 There was even a monument to honor the collie dogs of New Zealand, which is pretty cute and totally New Zealand! 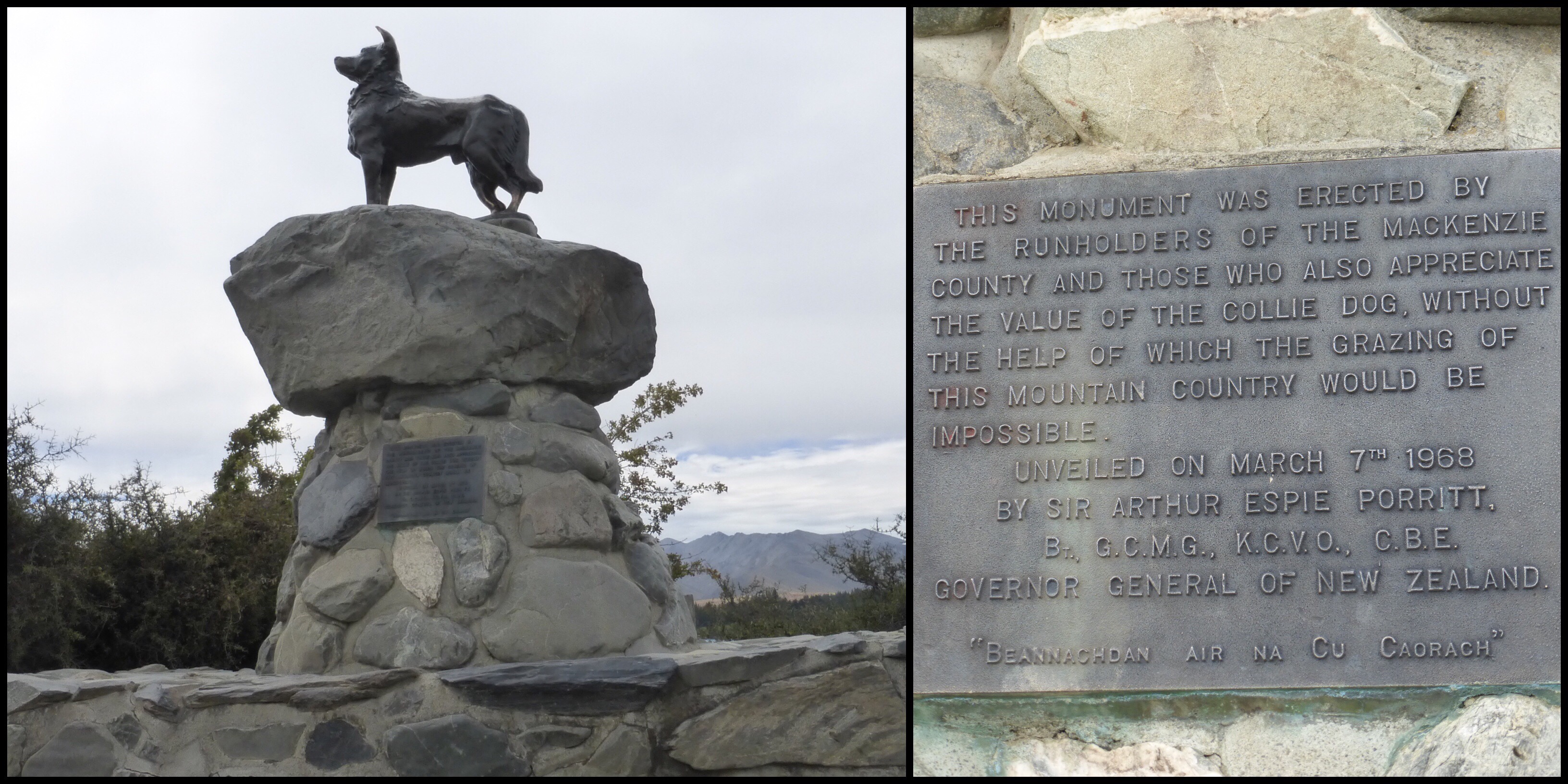 We stopped a local spot and got burgers, shakes, and fries for lunch before adding a couple more hours of hiking. Here’s our candid shot. 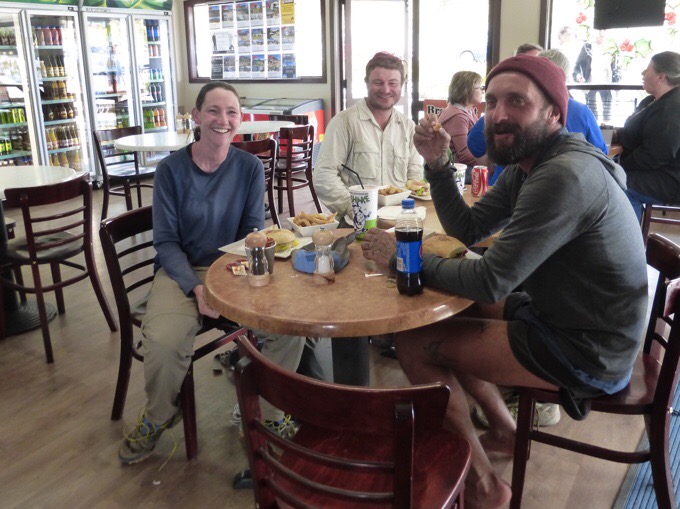 The walk out of town follows the Tekapo Canal, which is also a bike route. It is really flat, straight, and boring…but easy! We were doing a solid 3.5mi/6km per hour and made good time to the intersection with SH8 where E was picking us up. It was great to get these miles done because this is a 29mi/48km section with no camping, and now we have less to do when we get back to trail to get through to the camping area. 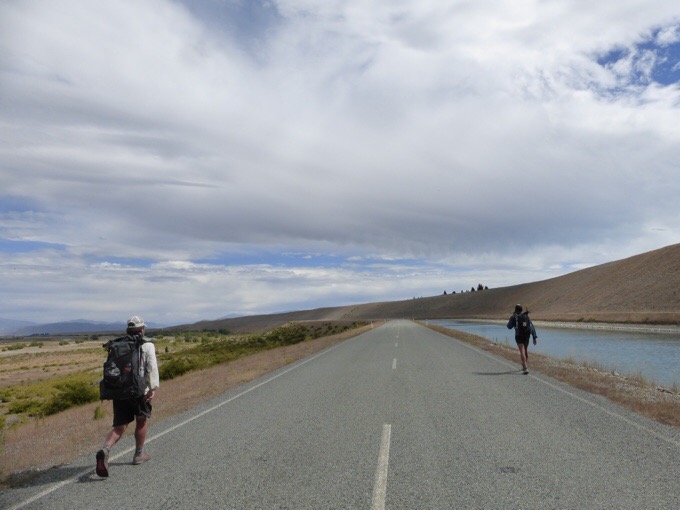 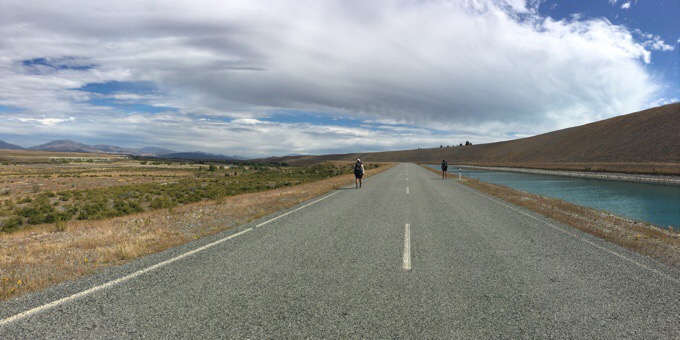 At 5:30pm, we made it to the highway and E!!! Knowing me well, I was immediately handed Oreos and a chocolate milk. She also had plenty of cold drinks for the guys to enjoy as well as we drove 45mins to Fairlie. 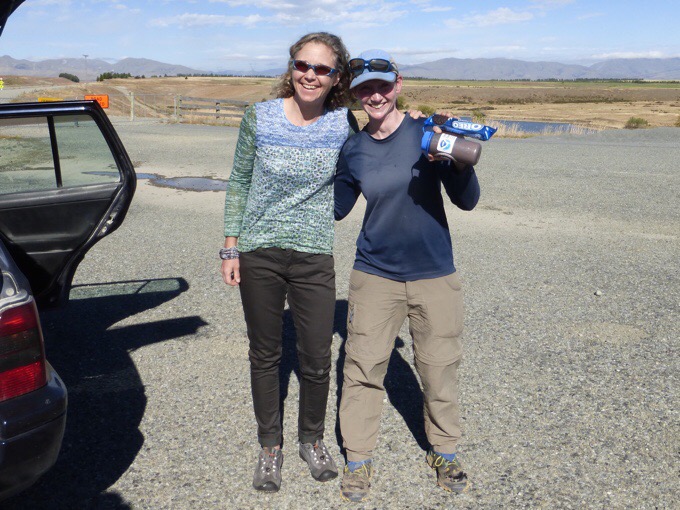 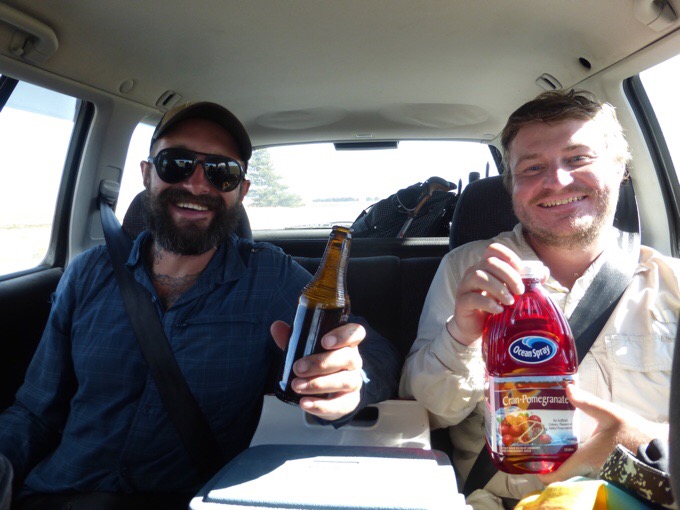 My shoes that I’ve had since Tamaranui made it! The tussock did a good number on them this week and wore through some of my stitching, but the tread was just great. I have a somewhat used pair in my bounce that should get me the rest of the way to Bluff. These shoes walked over 777mi/1250km and lasted 52 days. Not bad at all! 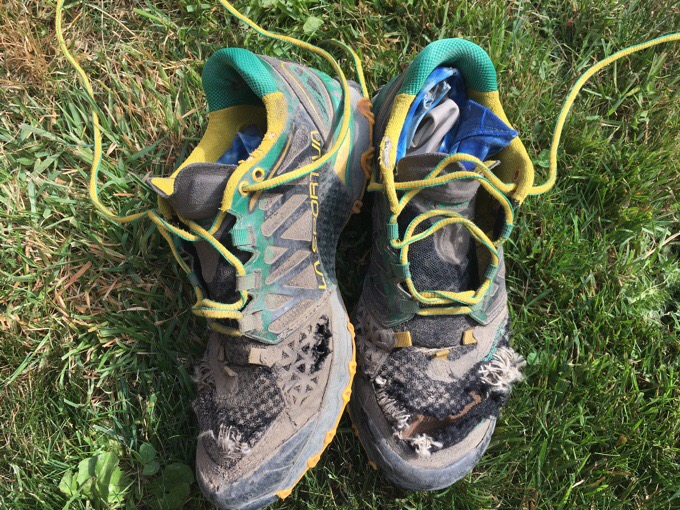 E and Andy’s house is pretty great. It’s in the most relaxing space surrounded by trees that have high trunks with branches just high enough to see clearly the mountains in the distance below the branches. They basically built this house from nothing, milling almost 200 trees that once covered where the house now sits. They are in the process of selling the house and moving back to the US. It’s only been up a few days and already has lots of interest, so that’s really exciting for them. If you’re interested, here’s the link to the house. You better act quick! I’m so glad I did the TA and was able to visit before they move. 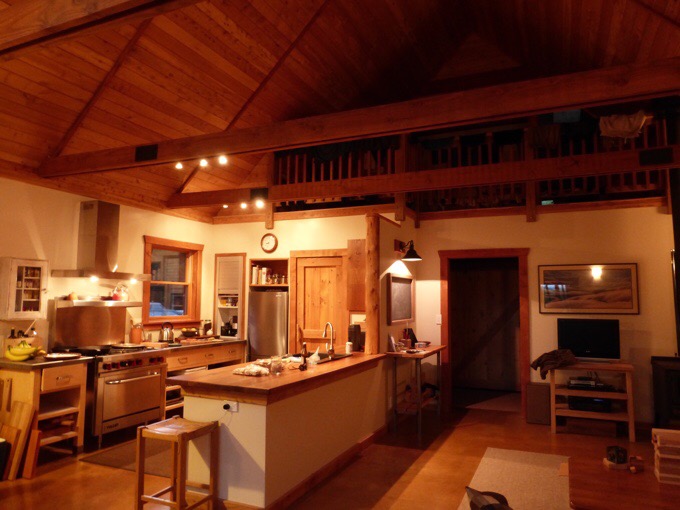 We made pizza and salad (SALAD!) and had a great dinner. It was such a big mileage day that we were ready to crash after dinner, showers, and laundry. Tomorrow, we will take a zero and relax. Then we are doing a side trip to visit Mt Cook. E is giving us a car, so it will be super convenient! More on that trip to come. Another great day. We are on a roll! 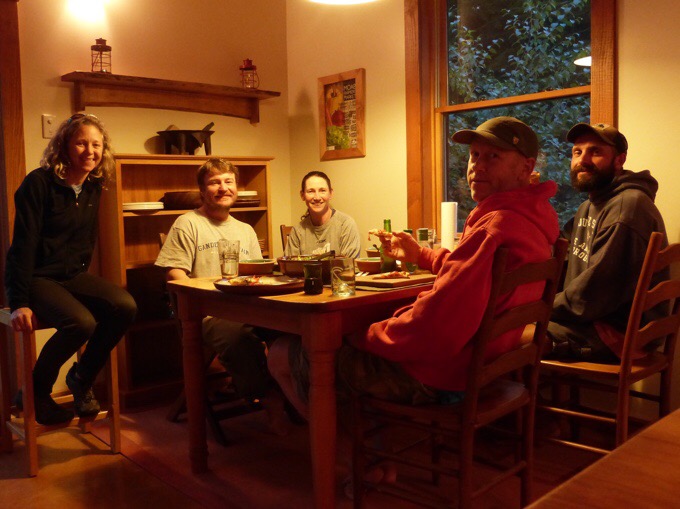