February 4th
*Note: It looks like Day 92 may not have gone out to subscribers in email. If you missed our zero at E’s house, here’s the link!
Today was our big side trip road trip to visit Mt Cook. Weather wasn’t looking super clear during the day today, so we weren’t in a hurry to get there. We had a spot booked at the Mueller Hut. A highly destined spot with great views of Mt. Cook and the surrounding area. It would be just a few hours hiking to get to the hut, so we had plenty of time. I was up early and much more energized than yesterday. I waited till 7am, as promised, before making breakfast with E. Griggs, Felix, and I stuffed ourselves completely with another great breakfast. E and Andy sure do make it tough to leave with all this hospitality! E even found a thin pad I could use as a back and sit pad before we left! THANK YOU E and Andy for being so awesome and for taking such great care of the three of us stinky hikers.

We headed out around 9:45am towards Mt Cook. As if they hadn’t done enough already, we got to borrow one of E and Andy’s cars for the next two days for the road trip. I think it’s just under two hours from Fairlie to the Mt Cook Visitor Center. Along the way, we drive right through Lake Tekapo again and we were able to drop Felix off where we left the TA the other day. Along the way, we picked up a hitchhiker! A nice guy from Israel also headed to Mt Cook. We all were happy to be able to give someone a hitch after all the hitching we’ve been doing lately. As the fates would have it, the guy recently did some of the trips I was researching yesterday. He’s even headed to another one I am looking at doing in just a couple days so I’ll get some great beta. We exchanged information, and he was a great resource!

We dropped Felix off on the TA and bid the bearded rabbit farewell. We never know what may happen, but we probably won’t overlap again. Now Felix has his buddy rabbit Ned to catch for motivation. It was great to be able to spend these days with Felix and we wish him the best. It’s so crazy that all three of us started the TA the same day 93 days ago, and we are all still overlapping. Goodbye Felix! May the rain be light (we know it will always be there) and may the damn wind always be at your back! 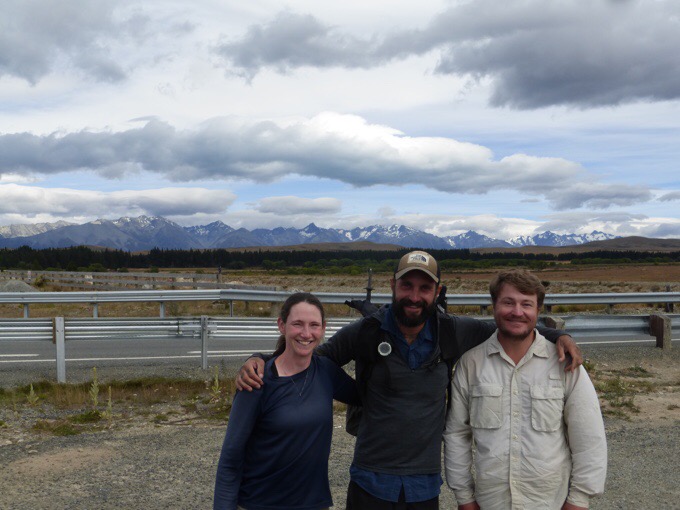 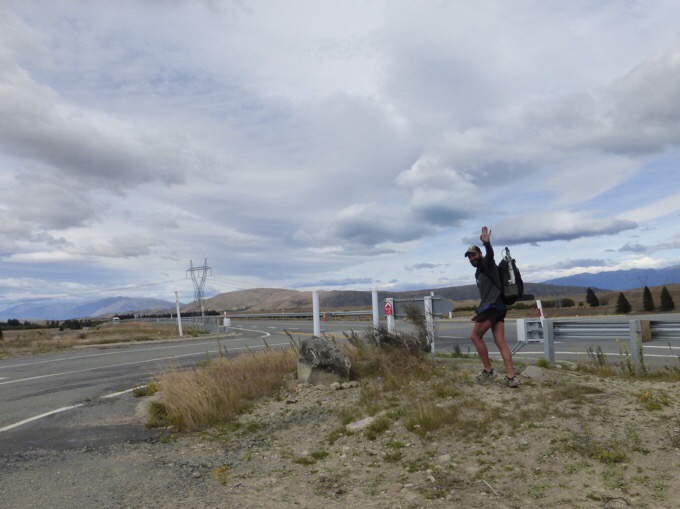 Next up was the Mt Cook Visitor Center. The TA follows the same path as the highway, so we paralleled the TA for quite awhile. As we went along Lake Pukaki, we got exciting views of Mt Cook! 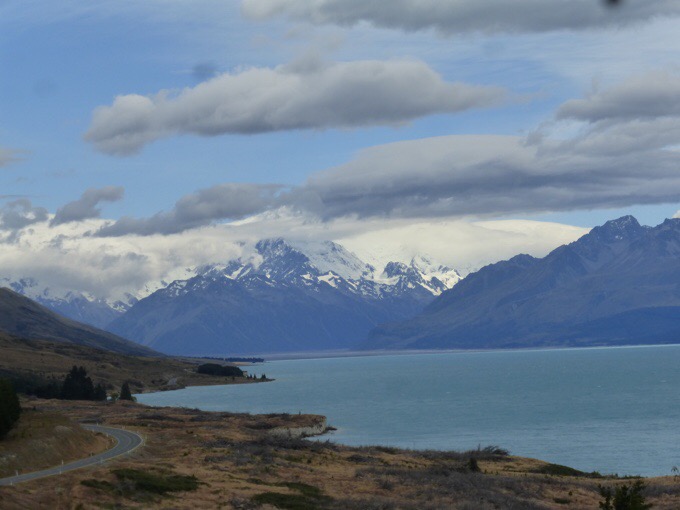 The forecast had clouds and the possibility of rain until 7pm, and then tonight and tomorrow look to be stellar. Mt Cook is crap shoot when it comes to weather and getting views. It is the highest mountain in NZ at 3754m/12,316ft. The Mueller Hut (1800m/5905ft), a hut on a ridge across from Mt Cook, is super popular, so we got lucky when we looked it up a week ago, and saw an opening on a Saturday night…of a three day holiday weekend…with clear weather possible. We ended up getting the last bed in the hut and one of us will tent. We hoped to get lucky and have someone cancel, but we weren’t. Luckily, E and Andy gave us a single person freestanding tent and extra blankets since it will be below freezing and possibly windy overnight. It just can’t get much better with our luck and timing on this one.

The Mt Cook Visitors Center was great! It has like a whole museum aspect to it and it was beautifully done with large glass windows and great views toward Mt Cook. We didn’t go to the Sir Edmund Hillary Museum. I heard it’s worth checking out, but it’s $20NZ/$15US. We got our permits for the hut and camping and then had lunch at the park cafe. 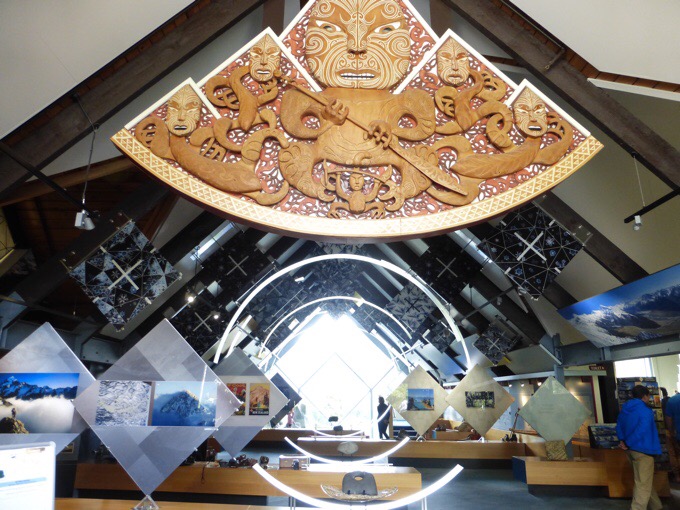 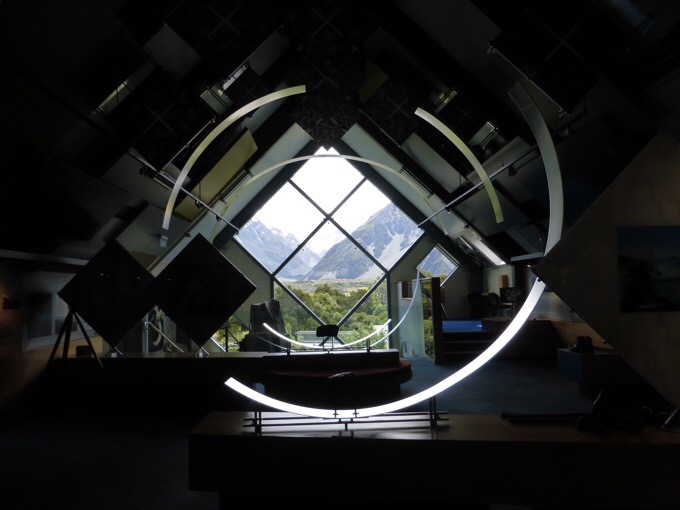 By the time we did all that, we decided it was time to head to the trailhead. It is a 3mi/5km hike up to Mueller Hut, but it has a lot of climbing with about 3300ft/1000m of gain up to the hut, which is at  5999ft/1800m. It is a hut on a ridge that looks out towards Mt Cook. This photo gives a good visual. I’ve marked the hut and the top of Mt Cook with red x’s. 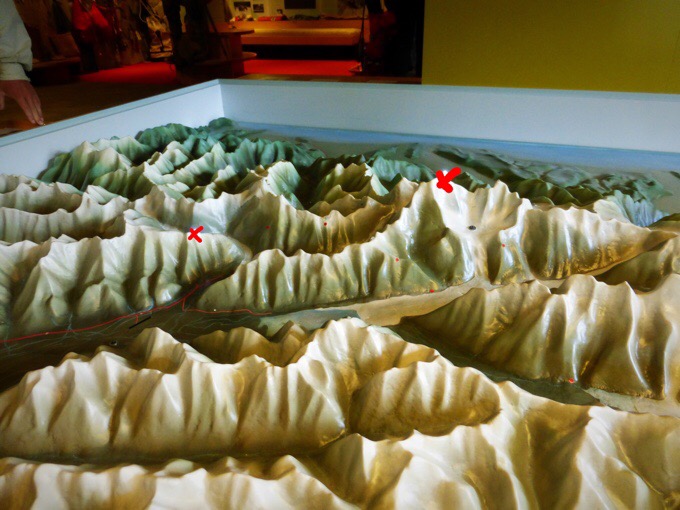 There was cloud cover, some wind, and some very light rain sprinkles in and out, but it was pretty darn perfect timing as it lifted as we hiked up. 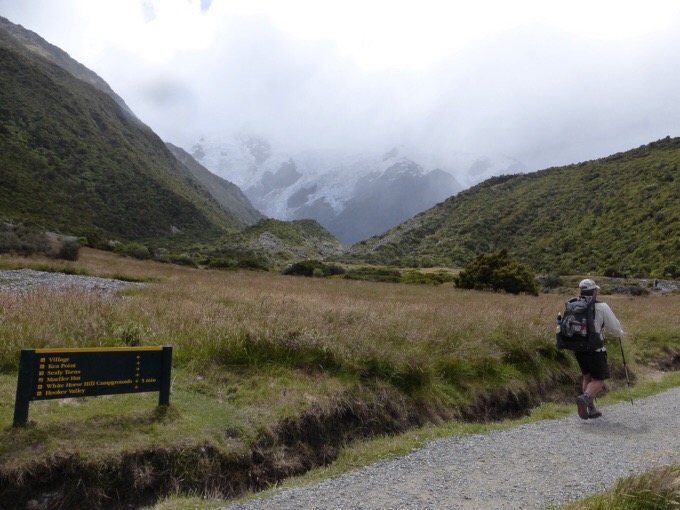 I can’t stress enough how lucky we were for everything to fall into place on this one to make this day happen. The views just kept getting better and better as we hiked up to the hut. Know that 2/3 of the time, apparently Mt Cook can be socked in with rain and fog. 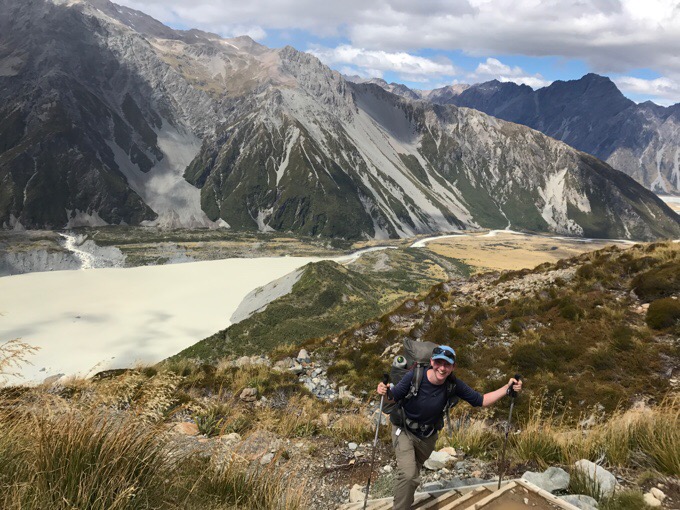 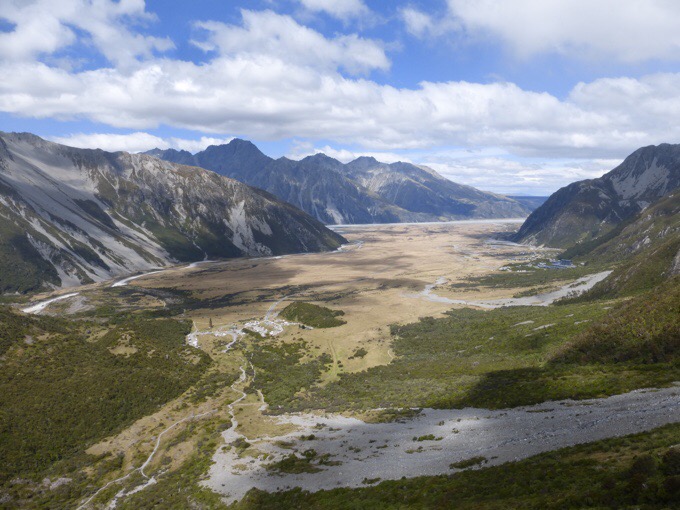 Looking back down on the carpark.

The hike is said to take 3-5hrs to go up 1000m/3281ft. It starts off with a trail, then steep steps for quite a bit, then some rocky terrain, some scree, and then rocks again. We surprisingly took just under two hours to go up and also did the short side trip along the Sealy Tarns trail to a great view. 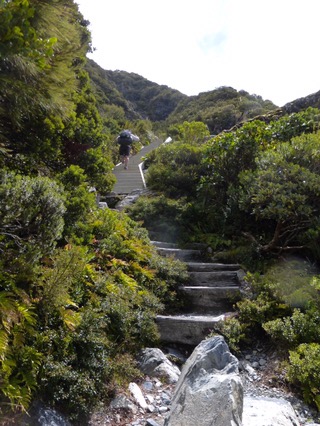 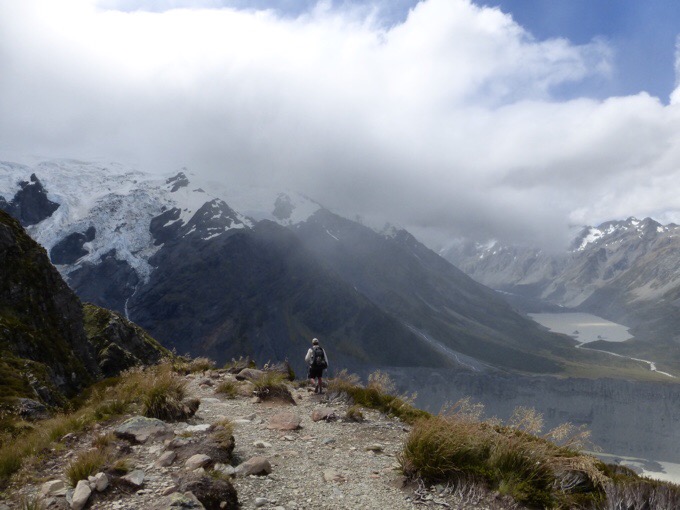 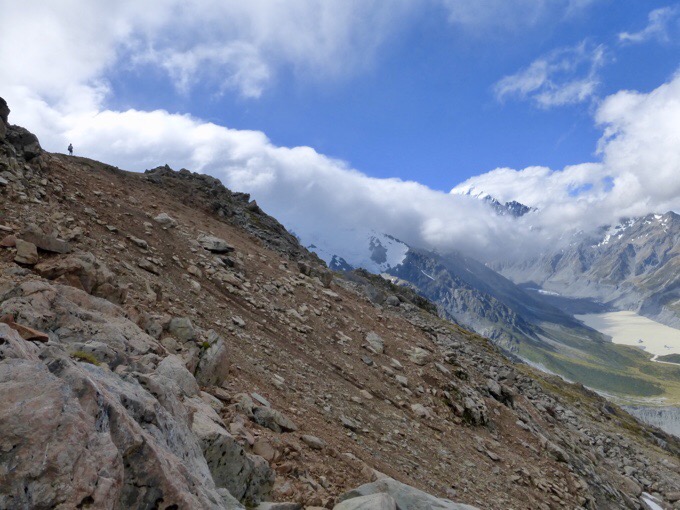 See Griggs on the ridge? 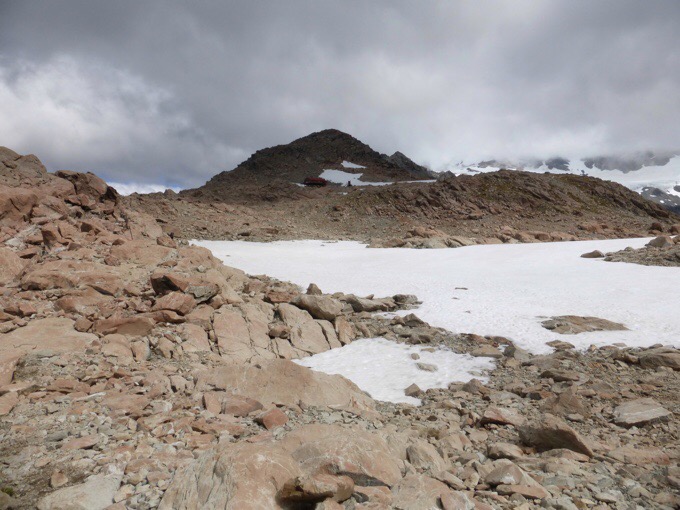 Mueller Hut in red ahead below Mt Ollivier which we will go up for sunrise tomorrow.

We got to the Mueller Hut at 4:30pm and talked to the hut warden. There were no extra spots and all 28 people checked in. There were two bunk rooms of 14 and a dining/kitchen area. The bunks were sardine style laying side by side with helpful cubbies for packs. When we first booked this a week ago, we both sat next to each other individually booking on our phones. We didn’t know how many spots were open, but could see it wasn’t full. It turned out that Griggs got the last bunk spot and I just missed out. He felt terrible about it, since this was my side trip idea that he was coming along on and wanted me to have it and he’d tent. I felt like he deserved the spot and earned it, and didn’t want to take it from him. We ended up flipping a coin, and I got the bunk and Griggs got the tent. There are spots around the hut with built up rock walls for wind breaks, so we looked around for the best spot to pitch the tent E gave us. It ended up that there was a great sheltered spot right under the elevated hut! The warden said it was open for the taking, so we nabbed that one. The wind is crazy out here, so views were not a priority. The bunks are $36NZ/$27US and the tenting is free, but we paid $15NZ/$11US to be able to use the hut facilities and Griggs was able to hang out inside all he wanted. 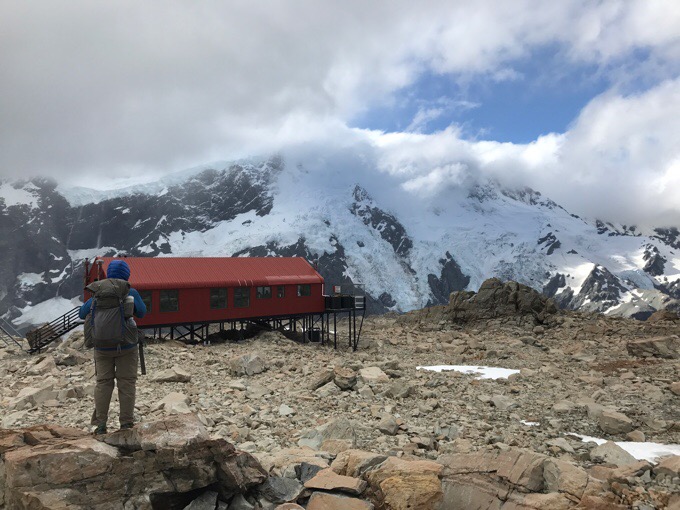 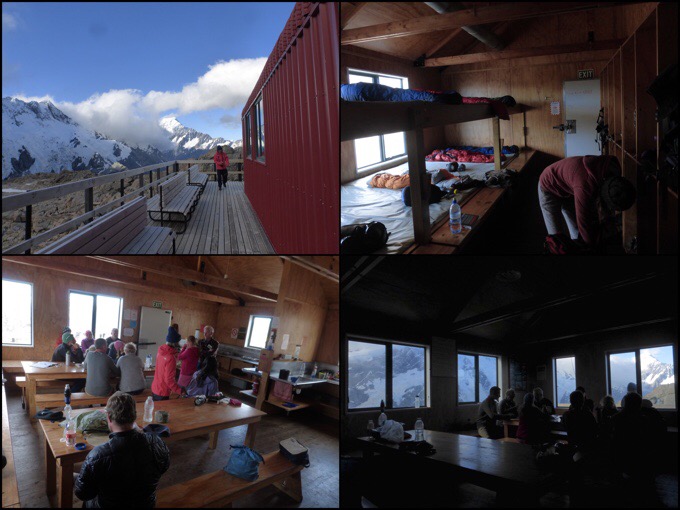 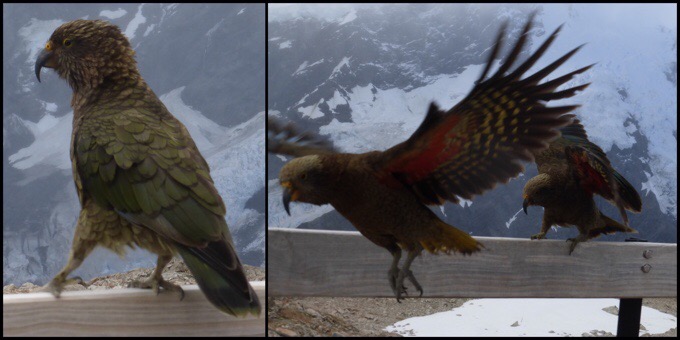 Kea birds were everywhere around the hut.

As the evening came, the clouds lifted as predicted. We got views of every mountain in sight. Mt Sefton looms most prominently over the hut with the smaller rock scramble up Mt Ollivier is just behind the hut. We will do the sunrise summit of that 30min trip up there tomorrow morning. The warden says it will be the first visible sunrise in a week! 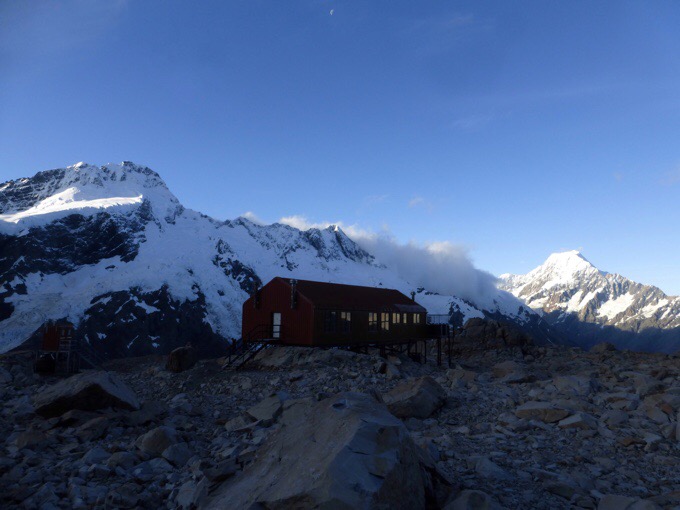 After dinner, when things got really clear, we walked over to the ridge for a great view and took photos with Mt Cook and Hooker Lake. 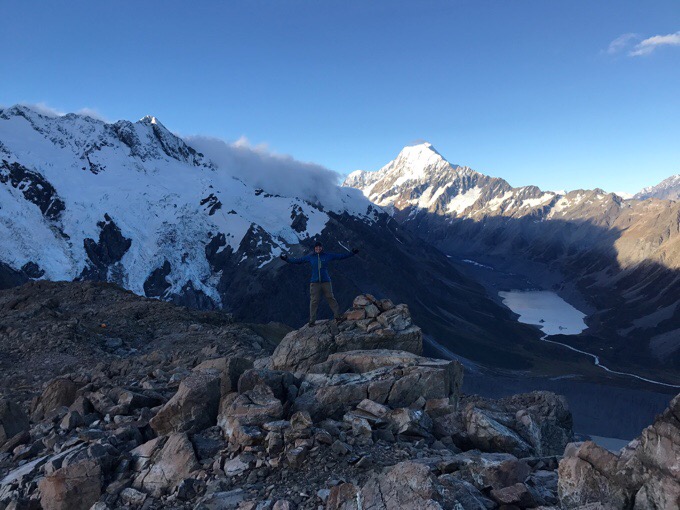 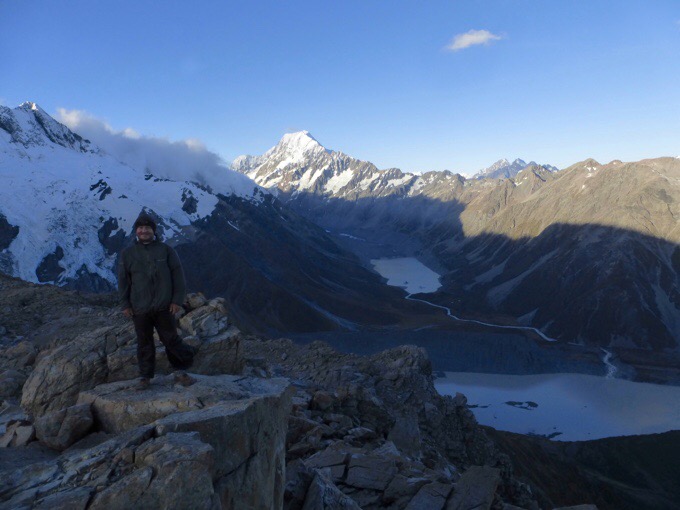 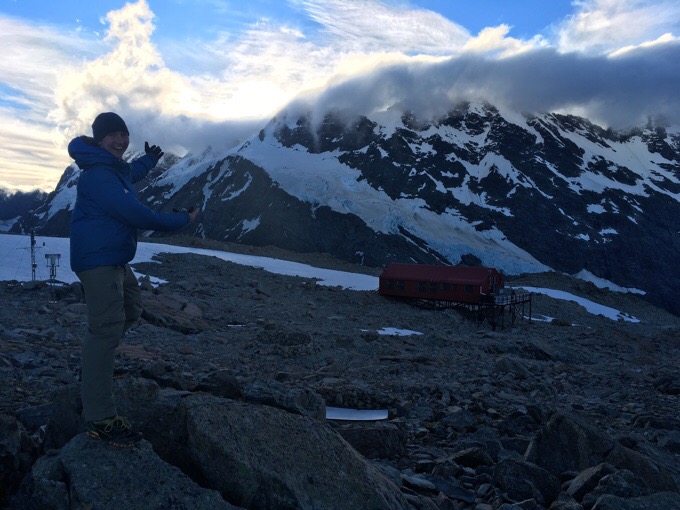 There is phone service on that ridge. I got the update that Becky and crew made it to Arthur’s Pass. They will also be missing Deception Valley like we did due to the high river, and they will walk the road like we did. They are still a week or more back.

We went back to the hut and kept going out for more views as the light and clouds kept changing. The oranges, pinks, and purples in the sky were great! I couldn’t stop taking photos and can’t believe we are getting to see all this when it so often not visible! 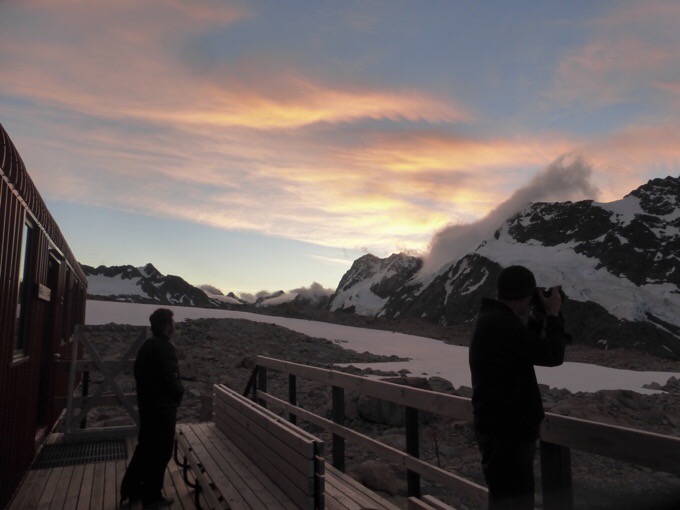 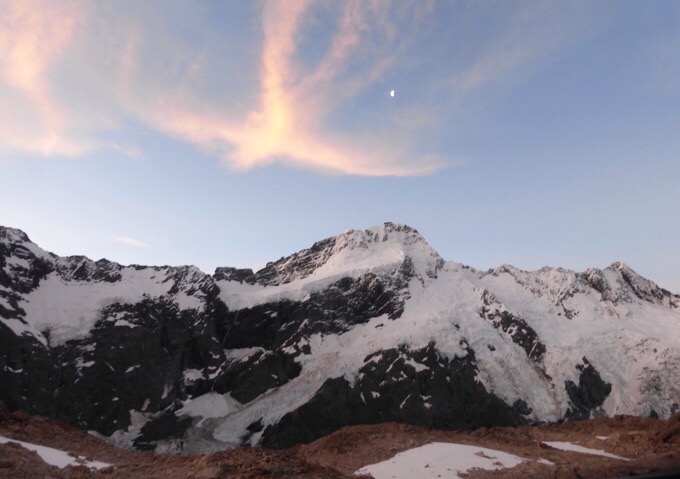 On top of setting light, it also lit up at night with the snow lighting up under the moonlight. Also, little avalanches were falling off Mt Sefton and the sights and sounds were awesome. I took this last photo just before 10pm. We are going to be so tired after staying up to see all this and then waking up for sunrise tomorrow morning. Totally worth it though! More to come tomorrow! 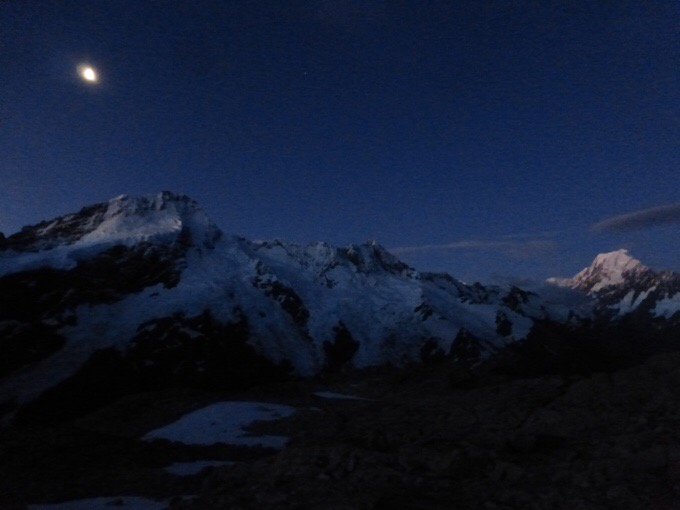