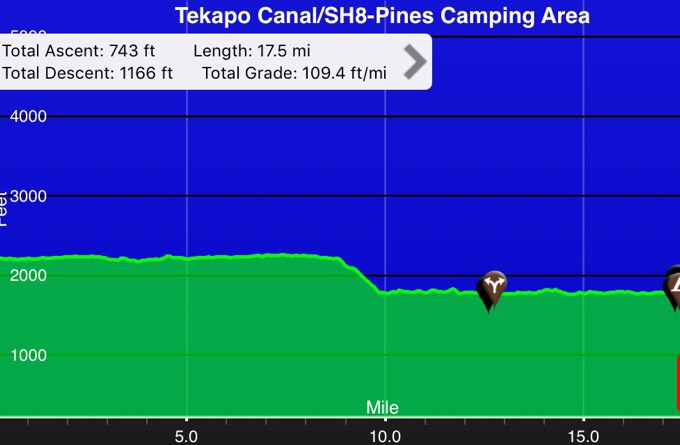 The wind did pick up significantly overnight. It was so strong it felt like it was going to take the hut right off the mountain. I was relieved to be inside, but there was some sort of crack near a window or something in the room I was in. The whole night, there was a high pitched whistle as the air was pushing through something. I was in and out of sleep and got a few solid hours before waking at 5:30 for the sunrise. Griggs ended up sleeping ok outside. The outside air was warmer than expected, and we had extra blankets we borrowed from E, so he was plenty warm. The wind break around the tent did a pretty good job. Like me, the sound of the wind did keep him up some, but all worked out pretty well. There were two couples that also attempted to tent around the hut, but both pairs must have had a rough night because I entered the dining area to find them both sleeping in there on the benches. Not sure if that was their original plan, but it was quite windy and I’m not sure anyone slept a ton no matter where they were last night.

As for sunrise, we scrambled up the pile of rocks behind the hut known as Mt Ollivier. This was the first mountain that Sir Edmund Hillary climbed when he was 13yrs old. It takes just 20-30mins to scramble up there. We heard the sun came up over the far mountains around 6:45am and got there around 6:30am. One other couple was up there as well and I’m surprised more didn’t make the early climb. Some just watched the sunrise from closer to the hut. It was still really windy, but it wasn’t too cold at all. I had my sleeping bag in preparation to bundle up and didn’t need it at all. 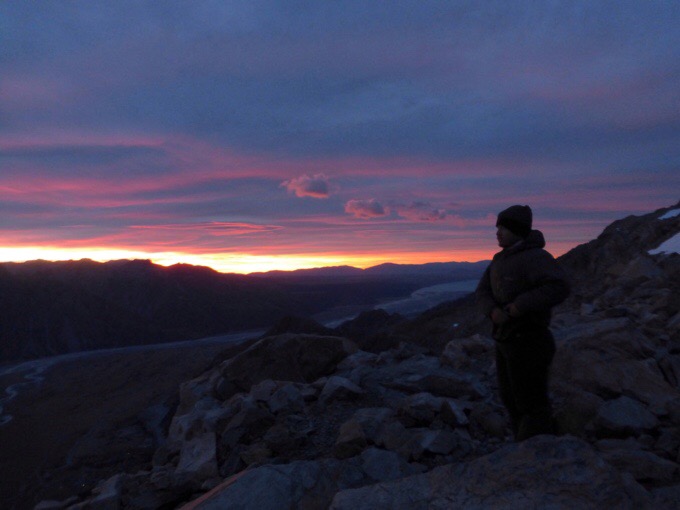 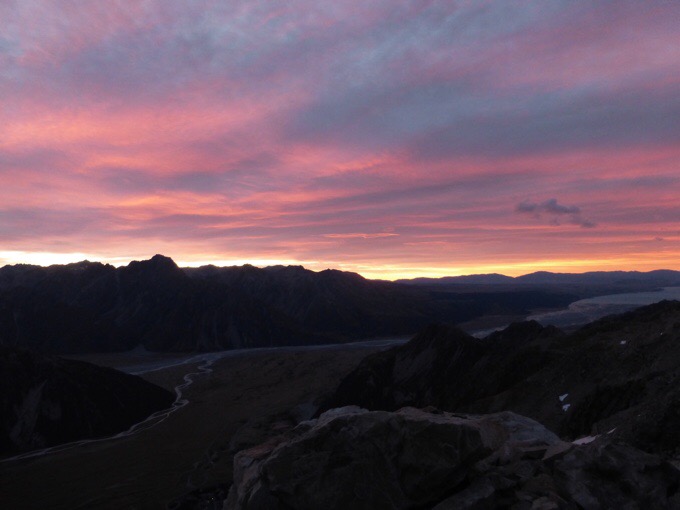 We were up there close to an hour as we got to watch all the colors change in all directions. There were clouds that kept changing colors and then the light on the mountains was changing as well. So many photos were taken! We are so lucky to have gotten such great a sunrise and sunset up there! 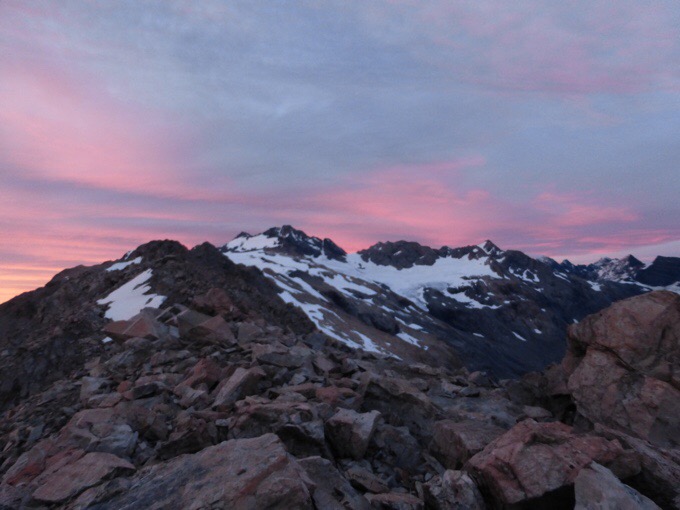 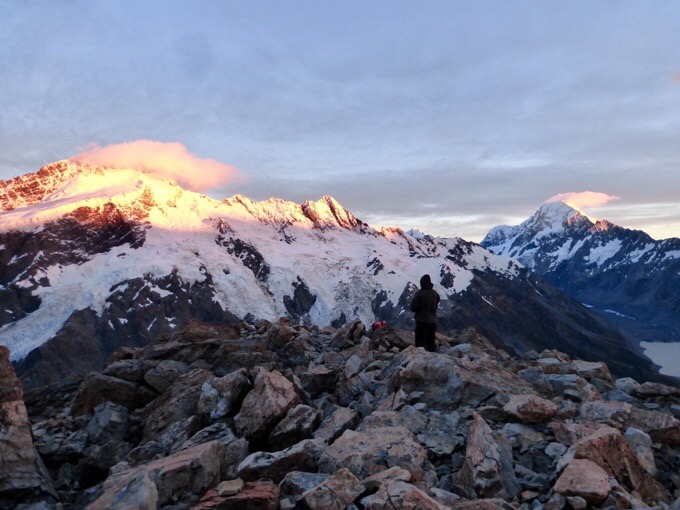 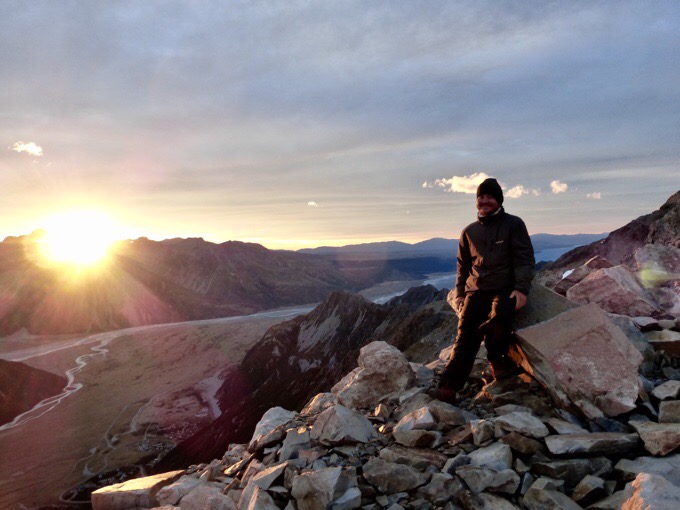 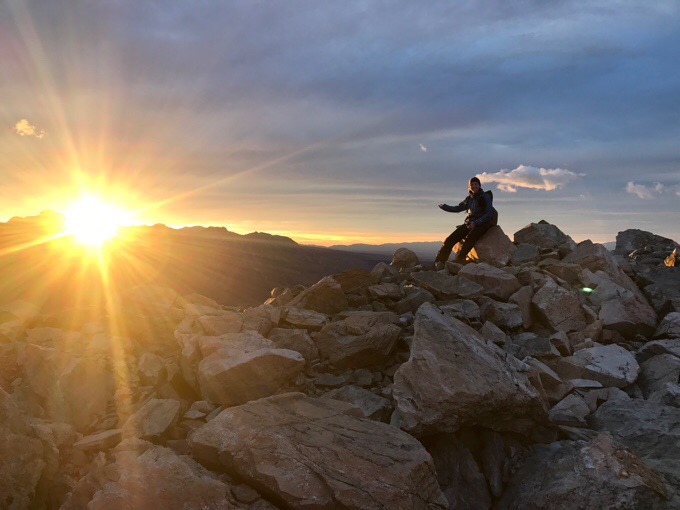 Such a great shot from Griggs! 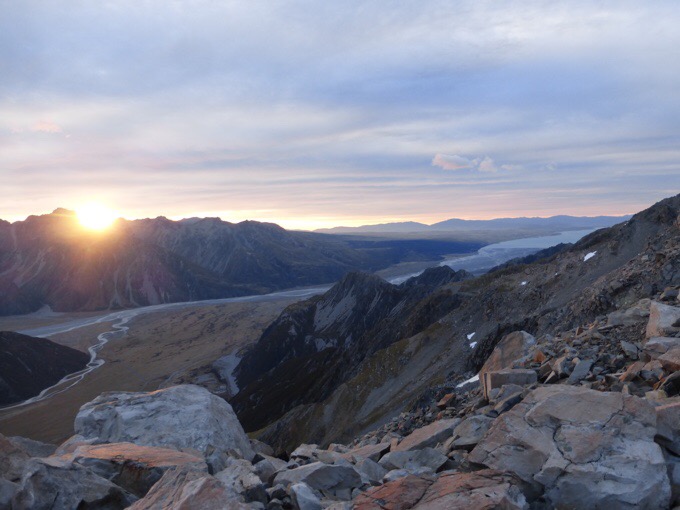 After the sunrise, we returned to the hut and packed up after having some breakfast. We left about 8am and were down to the car by 9:30am. It felt like we’d filled a whole day with events and it was still morning! 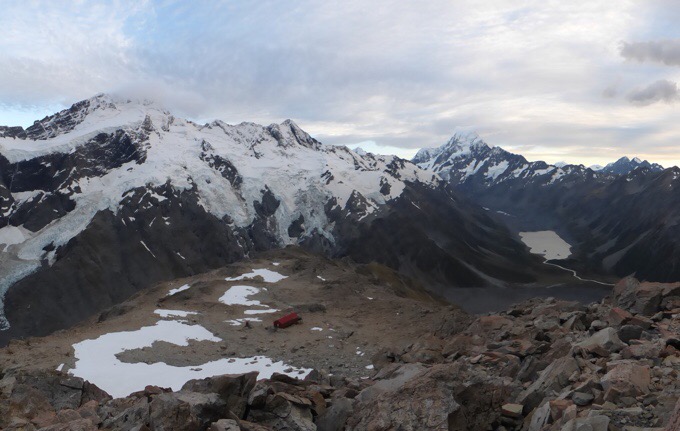 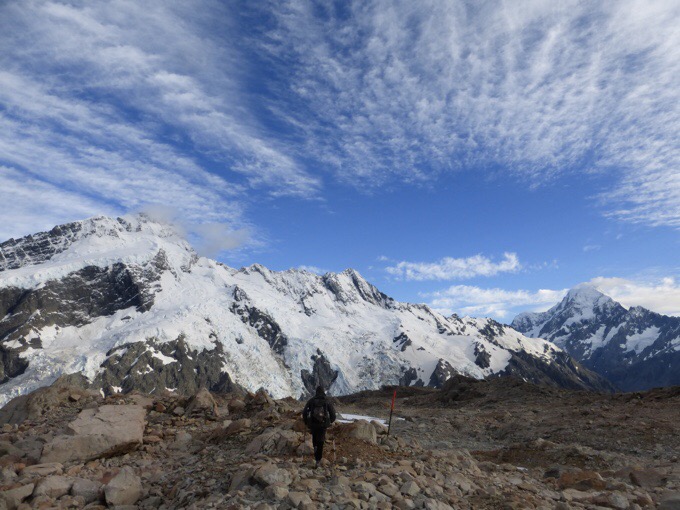 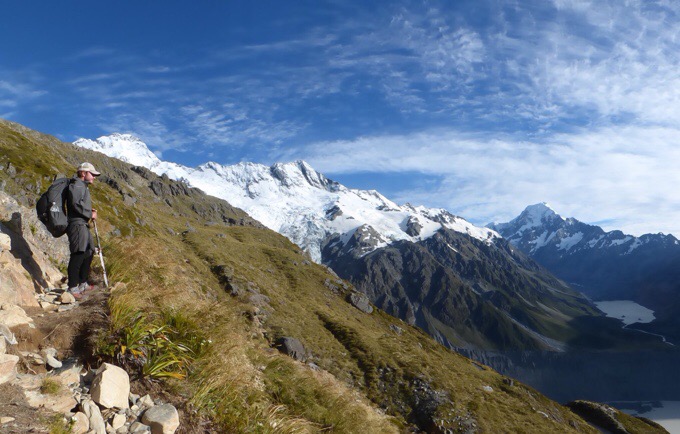 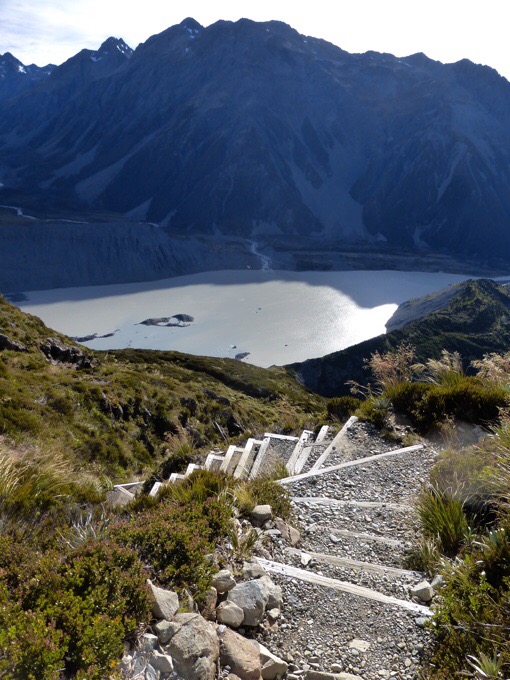 We decided to swing over to the town of Twizel to grab something for lunch before getting back on the TA. It was so fun to have the freedom of a car! We were so thankful to E and Andy for lending us the car for this side trip. It seems simple, but it felt so free for us to be hungry and realize we could just drive where we wanted to get the food we wanted. Even after lunch at the popular Poppies Cafe in Twizel, we wanted dessert. We realized we could just drive to another place and do that! It was pretty freeing. We found ice cream and splurged on bakery items as well. A warm brownie for me and a warm apricot pie for Griggs. We will be walking right through Twizel along the TA tomorrow morning, and I have a feeling we may be back to that bakery… 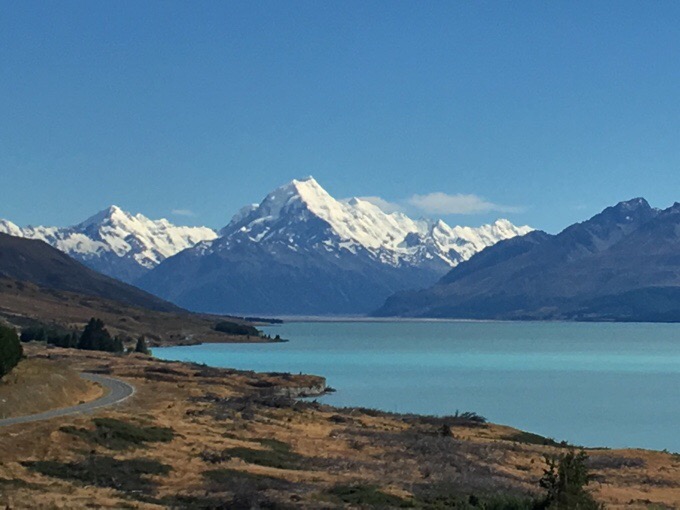 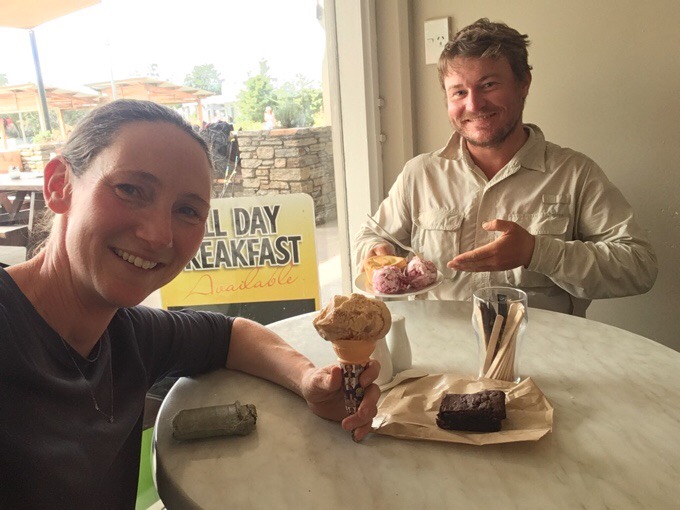 Then we headed back to the trail where we left off two days ago along the Tekapo Canal. We didn’t even have to drive all the way back to Fairlie to return the car, and were able to leave it in the lot for E and Andy to pick up later. THANK YOU again to E and Andy!!! As we were walking out, I mentioned my hiking pole was bowed and not collapsing fully ever since the tussock when I was really pushing on them apparently. Griggs offered to try to fix it and put it over his knee to try to bed it a bit. Just as I joked that he’d break it in half, it snapped! Shit! My hiking pole! Griggs felt terrible about it, but thankfully I’m short enough that I can still make it work without that piece the rest of the time I’m out here. Those Fizan poles have been through three years of hiking and thousands of miles, and are on their last trip anyway. I’m just hoping that one hangs in there a couple more months. I’m glad it’s still usable and I highly recommend those poles for durability. Many have broken poles out here, but my main issue is keeping mud/dirt out of the shaft so it doesn’t slip because they are twist lock. They do sell slightly heavier flip lock ones people have been happy with out here as well. 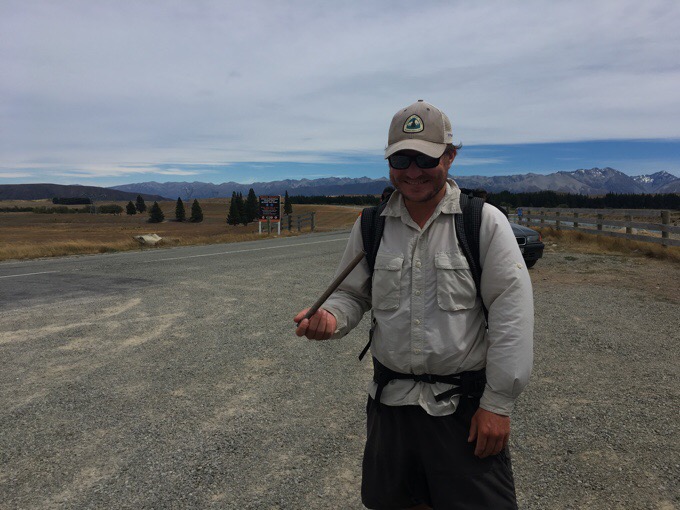 We set off back on the TA at 1:30pm. The rest of the day was walking mostly along the road next to the Tekapo Canal. I was thankful for wind and some overcast. I’ve heard this can be brutal with heat and believe it! 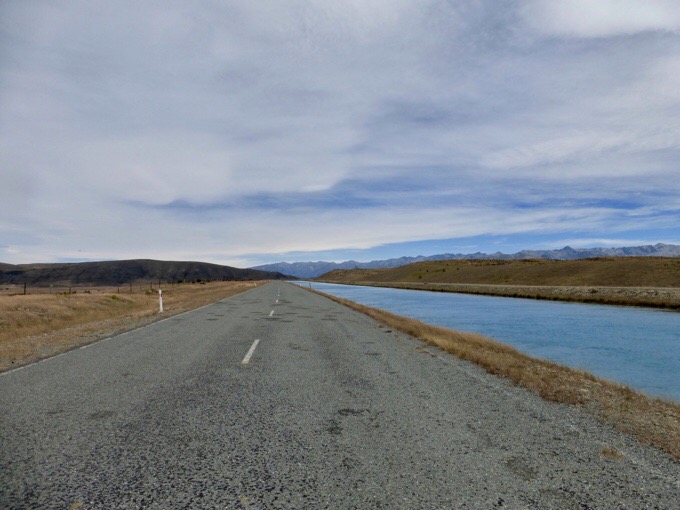 Many hikers either skip this section or ride bikes because it is something like 100km of basically road walking if you include before Lake Tekapo and up to Lake Oahu. We thought we’d have more hikers passing us on bikes as we know many doing that. We’ve taken effectively a double zero, so we figured we’d see people we’ve passed the last couple weeks. Apparently, there was a bigger group that biked yesterday. We only saw one couple that we met a week or so ago, Jens and Ellen from Belgium. They will bike in one day what will take us two or three. 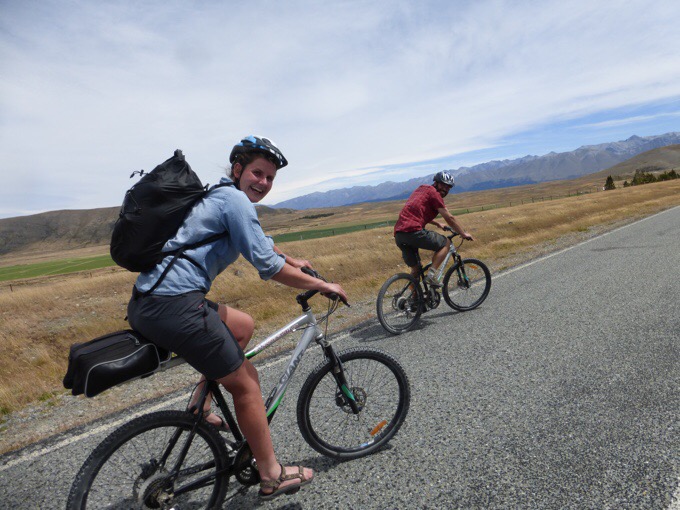 With this weather, and after the boost of the Mt Cook trip and zero with E and Andy, neither of us are bothered by this section so far. We still have a day or two more of it, but both of us were content to just cruise and have headphones. I loaded up podcast and book options in preparation, but was completely content with radio stations today. Tomorrow is the Super Bowl and I wish it was broadcast in some way or that I had enough phone data to listen to it online. 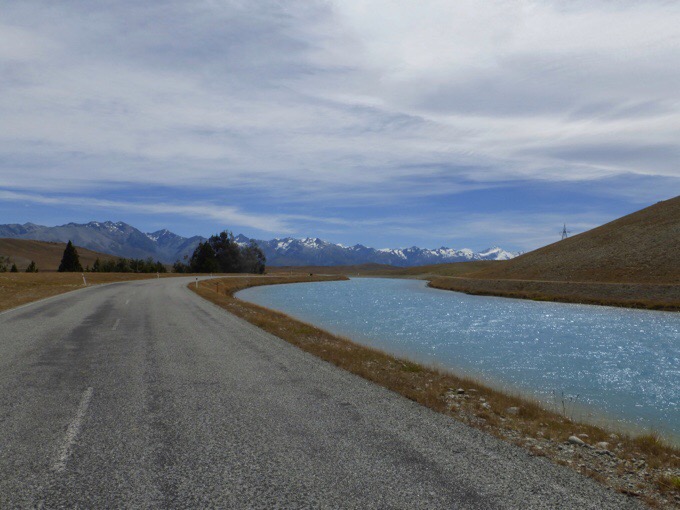 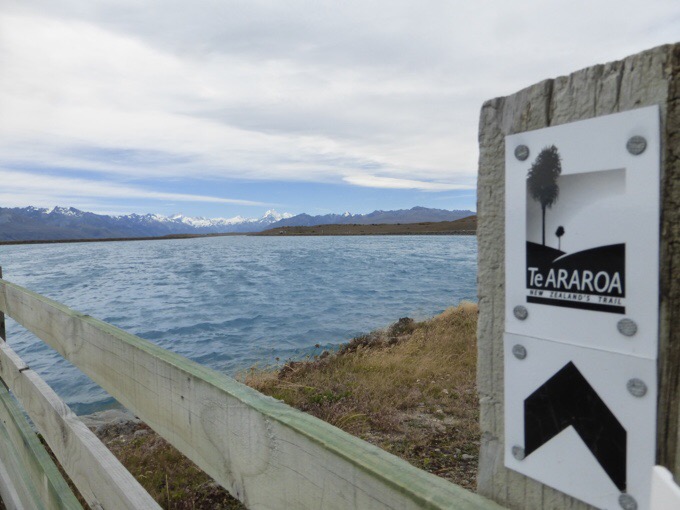 I loved having the view of the snow covered South Alps and Mt Cook. Much of the day. Just picturesque to have it over the other end of Lake Pukaki. I couldn’t pick just one photo of it, so enjoy all three! It was a real energizer to look at that and recall the previous 24hrs. What great timing and such a boost before this section that can really wear on people as a lull mentally and physically. 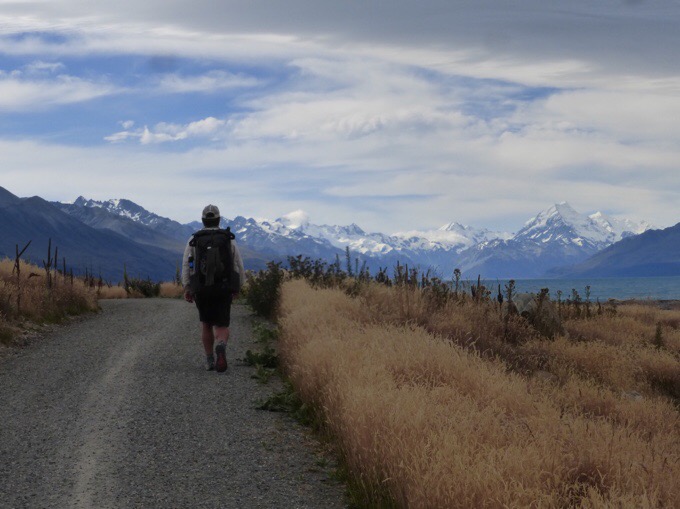 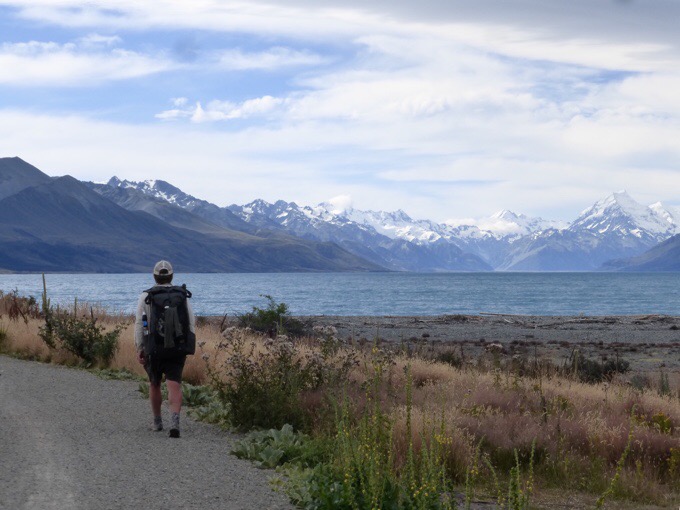 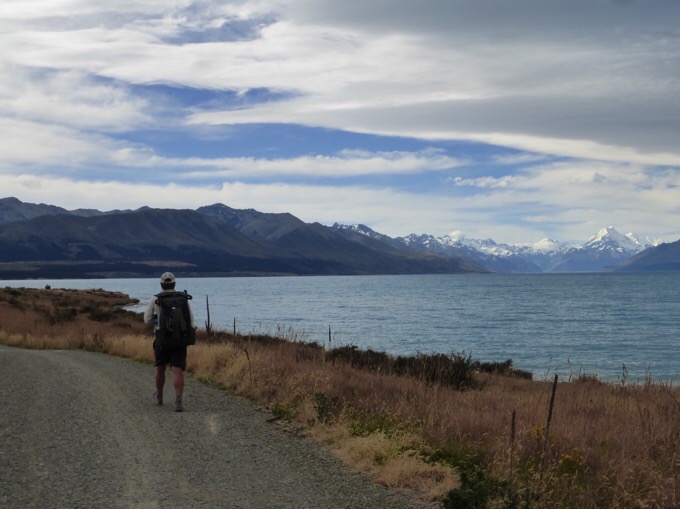 What we are walking is also part of the larger Alps to Ocean bike path. Few cars drive along it, but we do have some traffic every so often. There is apparently a 29mi/48km stretch from Lake Tekapo of no camping mentioned on the trail notes, until the Pines camping area, which is why we hiked a portion of this the other day before E picked us up. For future hikers, there is definitely an option before that that seems legal after the canal ends about 3mi/5km before. It’s a holiday weekend here and both areas were packed with camper vans and car campers. No TA walkers that we noticed.

We are camped in pine trees! We both love this kind of camping in the pines and it was a great way to end a pretty darn perfect day. I’ll mention that I didn’t feel my foot yesterday, and seemed to have slight phantom pain today. Maybe it’s healing!…Or possibly returning…I feel slight tightness on top of my foot, but it does give me hope that it isn’t serious and with rest it will heal itself. We’ll see if it gets aggravated again once I walk on it more. Pretty great that it survived coming down from the hut for 1.5hrs of pounding though. Ok, that’s about it. We both are pretty wiped out and going to sleep hard tonight! 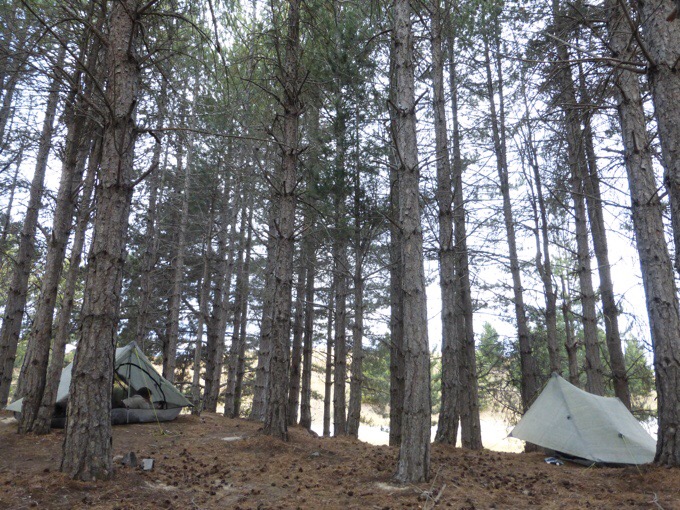