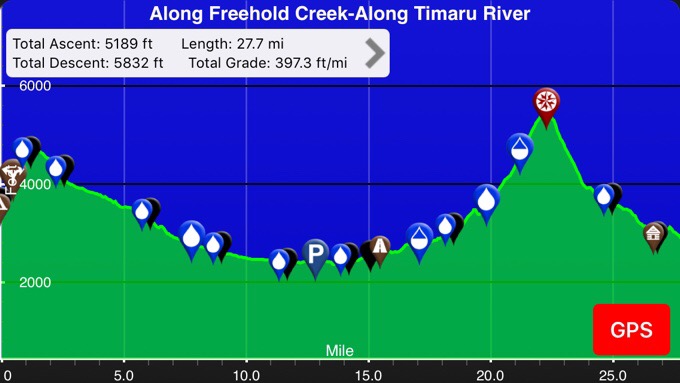 It was yet another great day today! We got going by 7am and left the forest for a day in the wide open surrounded by great views. I had worried the whole day would be in slow moving tussock looking down all day, but was pleasantly surprised to find that most of the terrain today had solid footing with little resistance. We were able to really enjoy the day. 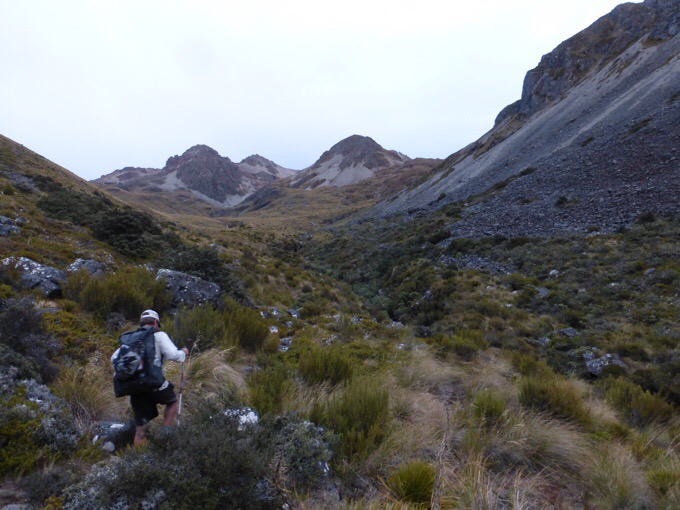 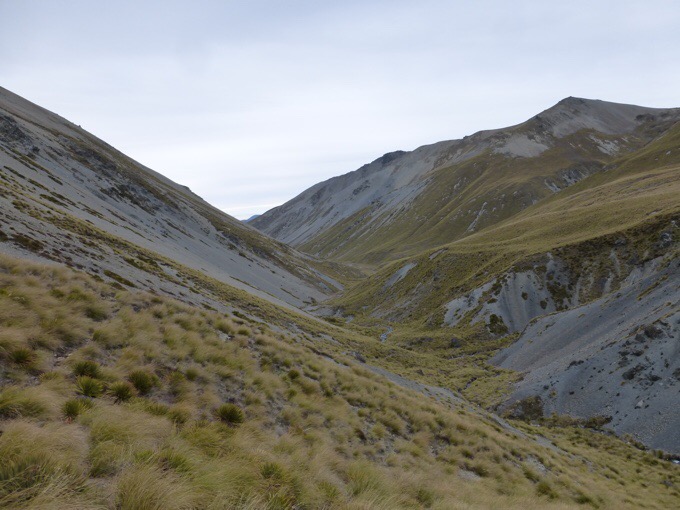 It almost felt like fall to me with a crispness in the air and clouds that kept the heat away. Again, this stretch could have been hot and we seem to have lucked out with the clouds providing just the right break from heat. When you look at the elevation chart, it looks like we had a lot of gain and loss, but it was mostly gradual, so it didn’t feel like as much as it was. 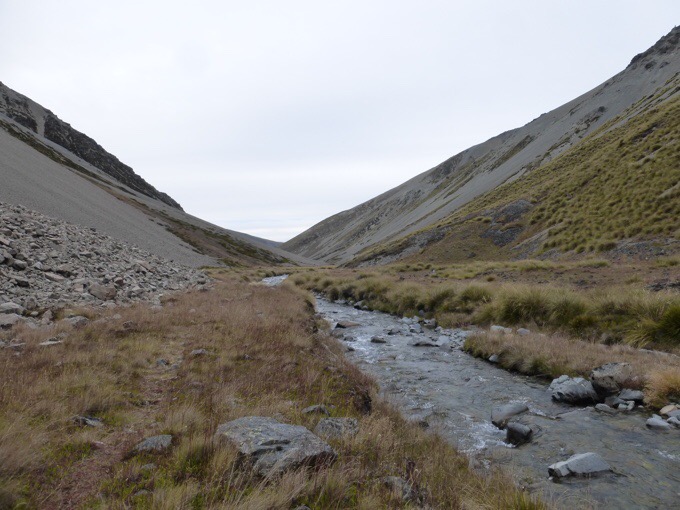 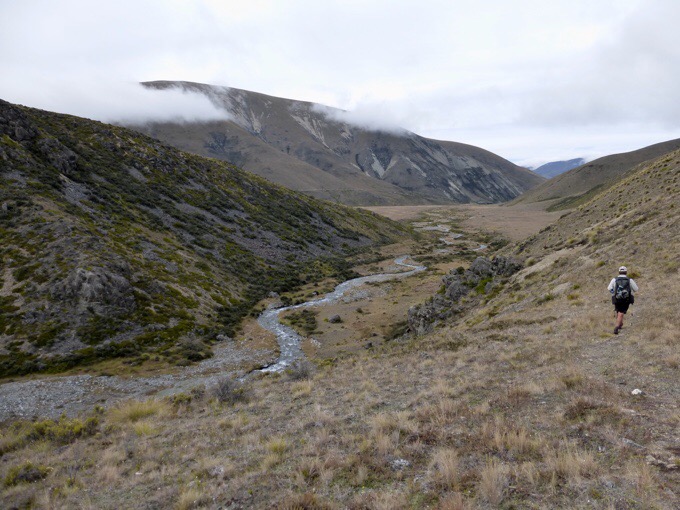 The first half of the day was mainly following one valley to the Ahuriri River, which is the widest unbridged crossing on the TA. There is a bridge 5km downstream that people have the option of using if the river is impassible. I was not a fan of this crossing, but we got through it. Griggs got through in an area that wasn’t good for me. He has great comfort with fords and I wish I had that solid of a base to just power through crossings like he does. It took me an extra 30mins to figure it out, but I found a spot downstream where it forked with an island in the middle. The first half of it was shin deep and easy. Then I had to walk back upstream on the island, and cross a more intimidating break in the island before getting to a crossable part for the second half of the river. Griggs came over for that half and we paired up to get me across. I think it would have been ok for me to do that in my own, but it looked deeper than it ended up being. I was thankful for Griggs for being willing to come back across and support me on that second half. Very glad that one’s done! 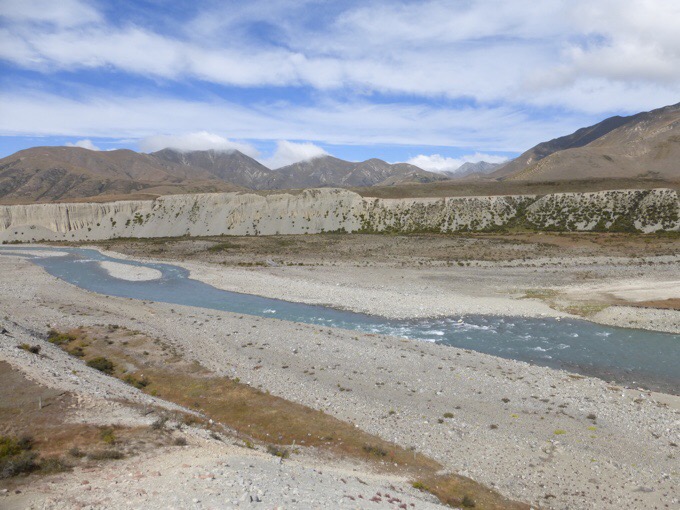 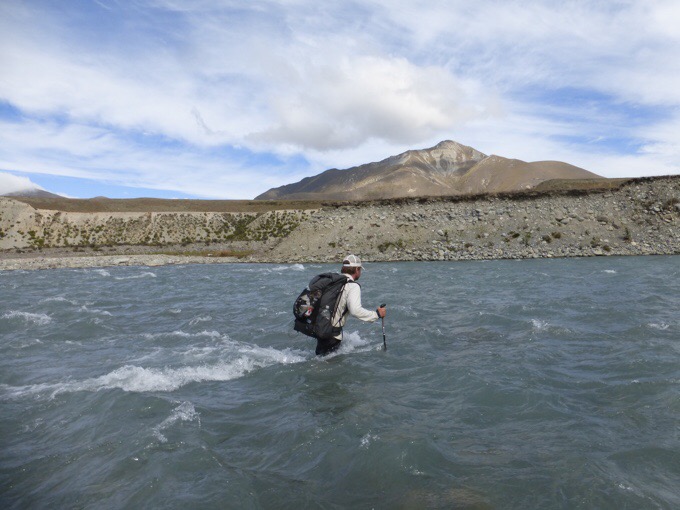 We had lunch soon after that and then the second half of the day was mostly on a four wheel drive track with easy walking. 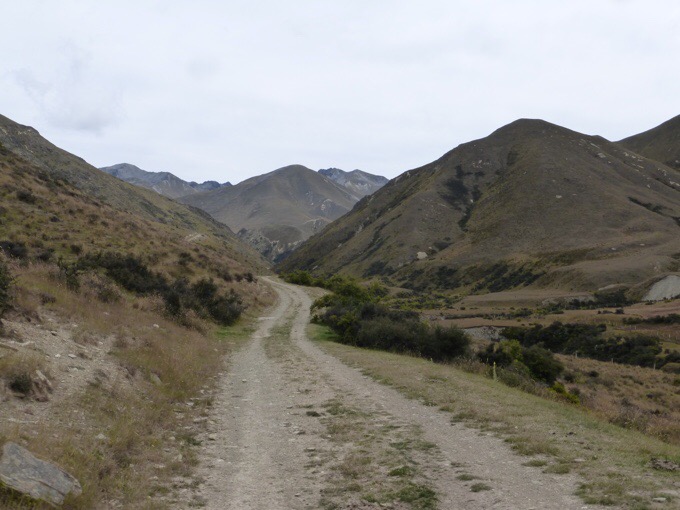 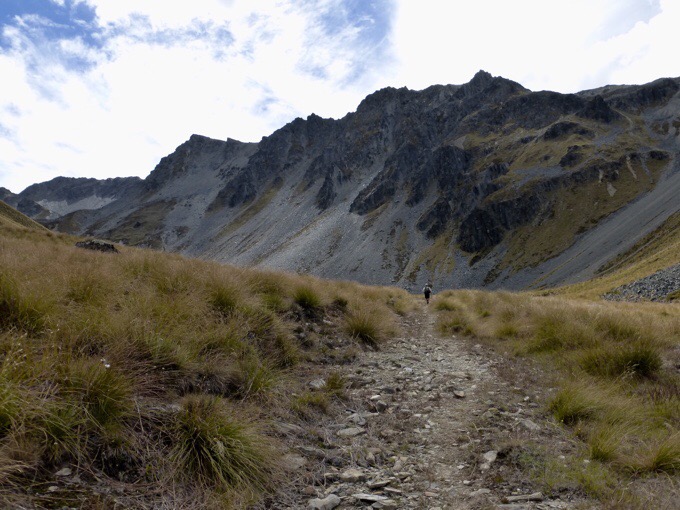 There was a climb up and over Martha Saddle towards the end of the day. It was a consistent climb with great views on both sides that we both really liked. We seem to have hit the bubble of northbounders, and came across five today along the road. Again, having cooler weather made this one a lot better I’m sure. Doing this exposed day in hot or rainy weather would be tough. 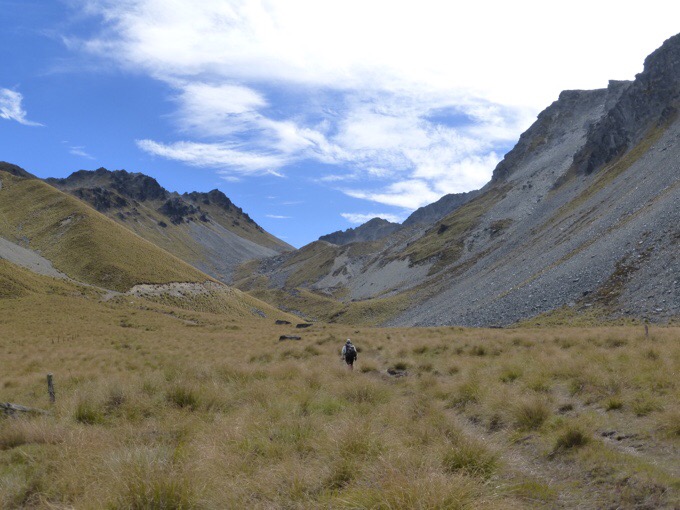 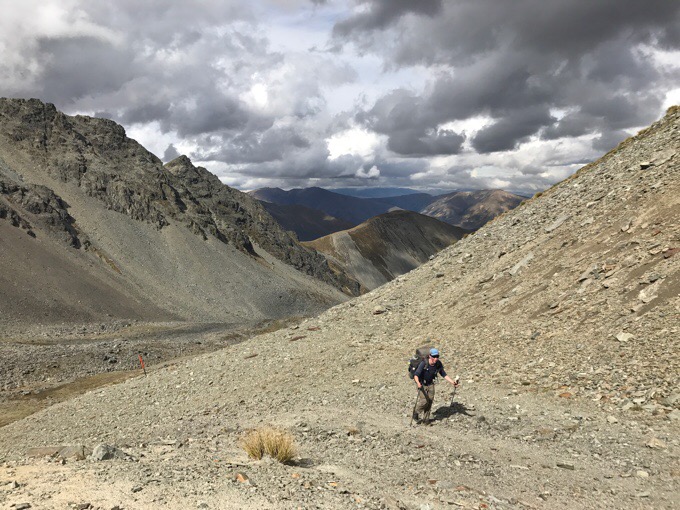 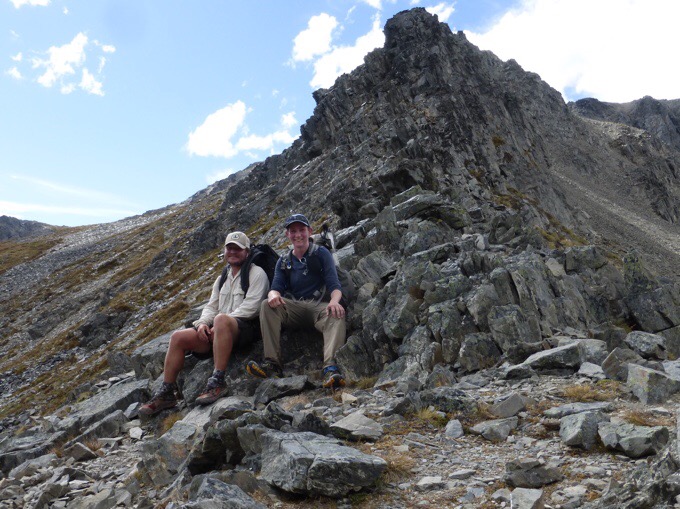 The views on the way down were just great with evening lighting! 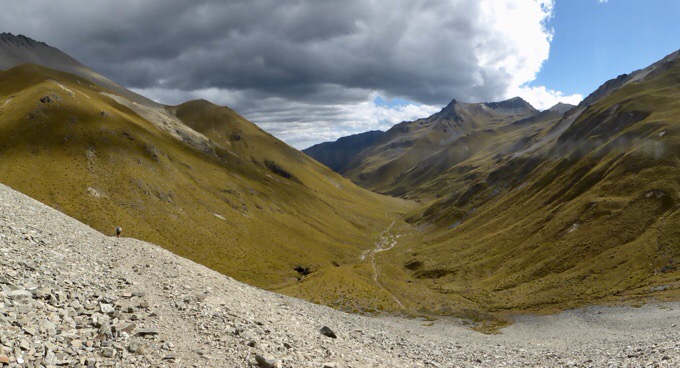 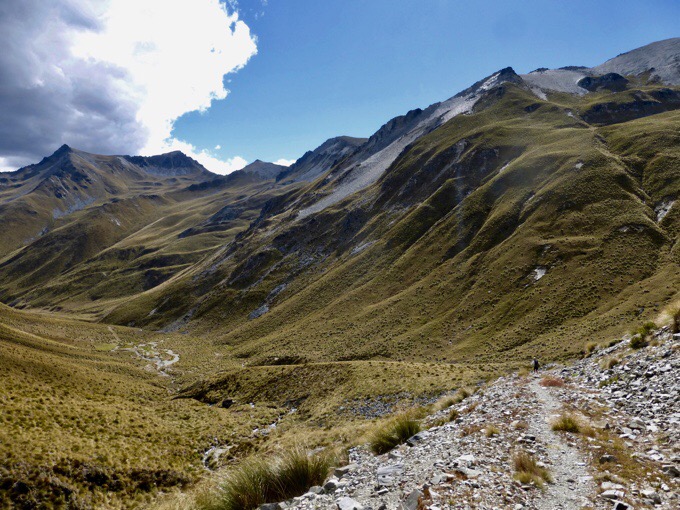 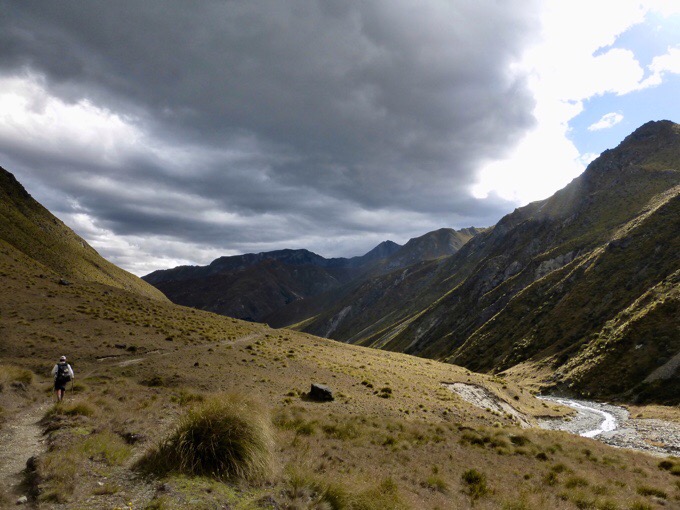 After Martha’s Saddle, we reached Top Timaru Hut. Weather was nice, the hut was full (holds six), and there were a ton of sandflies there, so we moved on another 20mins to a wooded area Guthook marked as having camping. Last year, Why Not commented on the terrible condition of this section of trail. It looks like it was recently cleared, so we were greatly relieved and could imagine how tough the thin trail that sidled the hillside at a downward angle would be terrible with brush. It give us hope that tomorrow will be the same. 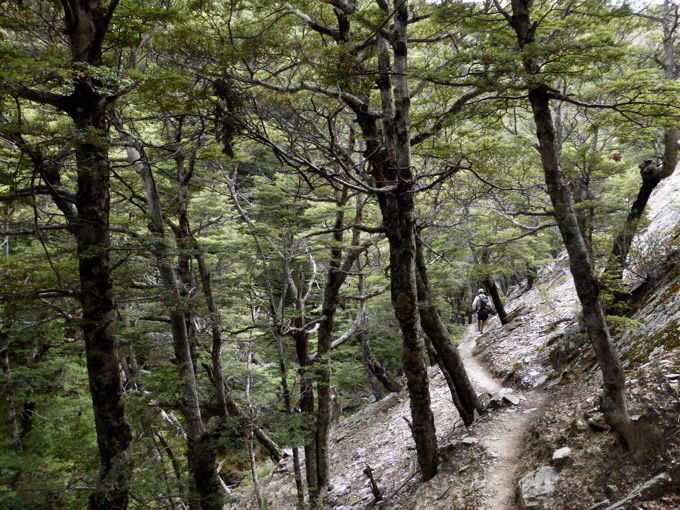 The camping ended up being awesome again in the woods, with a nearby stream, and great soft ground. This is our third night in a row with great wooded camping! Again, we feel like we are on a roll with great weather and timing. We have done 59mi/95km in the last two days and feel like we are on one of the US trails with how well we’ve been about to hike and more frequency of sheltered camping spots. 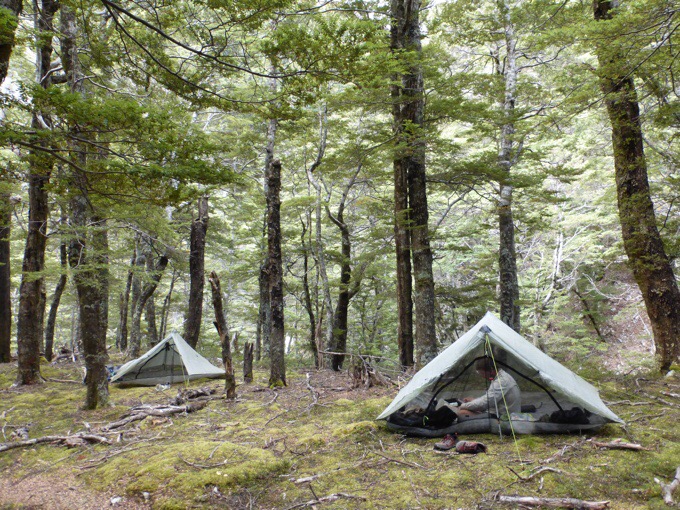 We looked ahead to notice that there are some towns and limited camping tomorrow, so we get to sleep in a bit and do a bit of a shorter day to land at a Holiday Park before getting to the town of Wanaka the following day on another relaxed day.

The clouds gathered all day and got darker towards the end of the day. The forecast hadn’t predicted rain, but it is raining some as we are in our tents tonight. It is so cold that it seems like some of it came down as sleet. It seems early, but it is feeling like a shift towards fall already.  It will be nice to sleep in as temps have dropped in this canyon and I’m quite comfy in my sleeping bag.

If I were to hike straight through, there would be less than three weeks of trail left, but I have at least a week of side trips I’m hoping to get to while Becky and Tom catch up so we can do the last two weeks from Queenstown (the town after Wanaka) together. We are in the final countdown to Becky’s birthday celebration in Queenstown. We will all hitch there from wherever we are for that and then back to our respective spots before reuniting for the last two weeks. There are a couple options on what exactly we will be doing, but it’s safe to say it will be falling in some form from something very high. Oh man! Just 10 days till the birthday and reunion!