It got colder than we thought it would overnight. Again, I’ve been surprised at the range of temperatures in a day. It was quite warm when we pitched our tents last night, and I woke in the middle of the night needing to close my storm doors and put on layers for warmth. It was about 45F/7.2C in the woods where we camped, but when we hiked out into the open valley, it was much colder at 36F/2.2C and frost covered all the button grass (like tussock) we were walking through. The sun started to hit the grass after awhile, and I put on my rain pants over my pants knowing all the frost would soon become quite the car wash effect as we pushed through the brush. 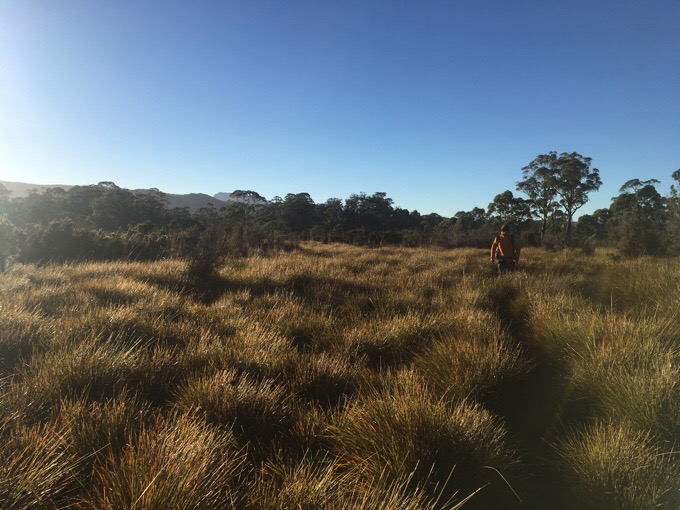 We knew there might be mud on this one, but it was much brushier than what we expected. The button grass was one thing, but in addition there was a solid two hours of going in and out of taller scrub that was quite stiff and coarse to push through. It wasn’t comfortable for either of us. Griggs used his headphones for distraction, but in this stuff that makes me feel claustrophobic, sounds make it worse for me, so I just tried to zone out and think of something else. 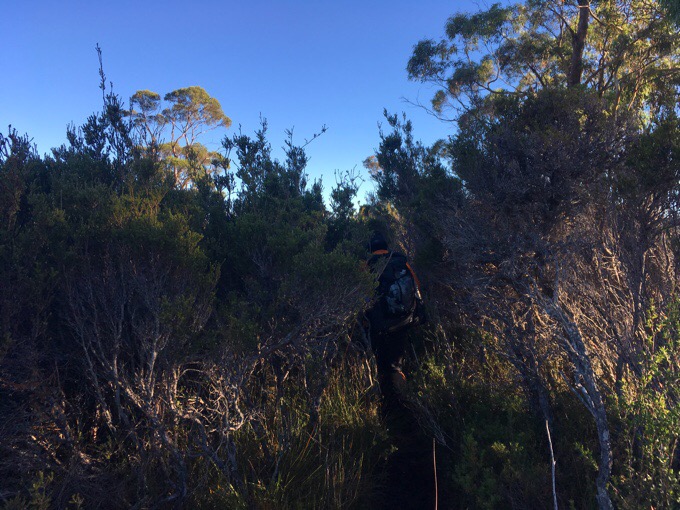 The mud wasn’t bad since it’s been dry lately, but there was some foot sucking stuff and Griggs did step in one spot where his whole leg got sucked in up to his knee. After a couple hours, the sun warmed things up, and this was our hottest day yet. The trail got a bit clearer as we started our ascent up to Lake Rhona. 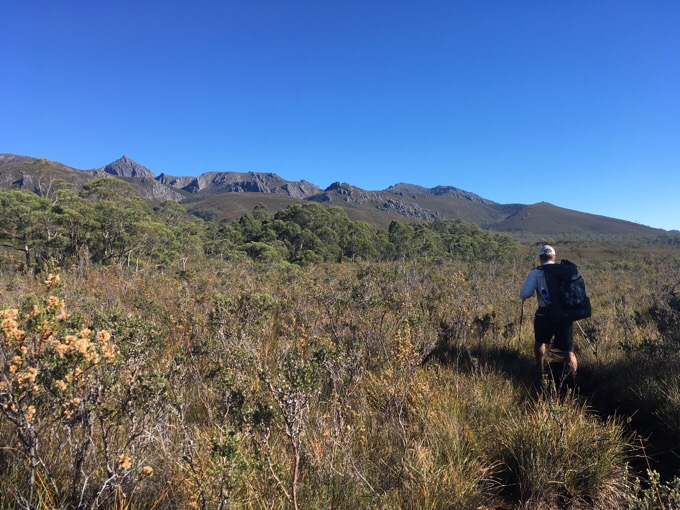 I have to say that with the long drive on gravel roads and now the rough brush, I was wondering if it was worth all this effort just to hike in and see a lake and hike out the exact same way. We’d seen photos of Lake Rhona, so when we crested the final ridge and looked down, it was not a surprise. Yes, a very nice lake, but I think the two of us are quite spoiled by the countless lakes we’ve seen surrounded by mountains. 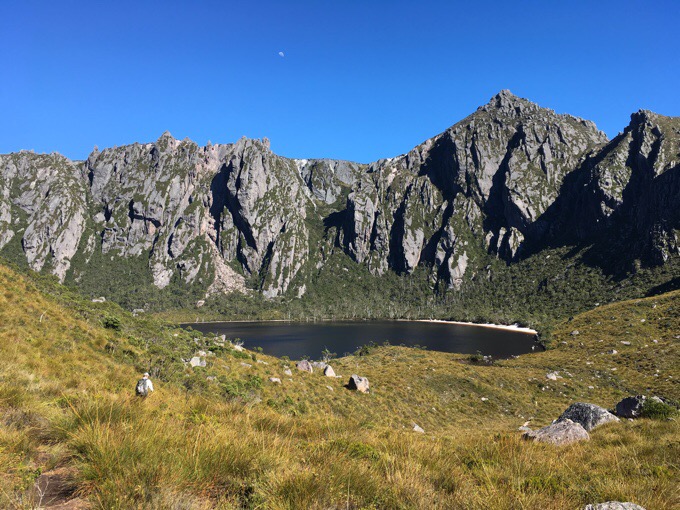 Many choose to camp on the sandy shores of the lake, but it was just 11am for us after doing 7mi/12km for the day. We had a nice lunch and then did the 3.5mi/6km track that was suggested that goes on the ridge line high above the lake. We were not getting our hopes too high, but knew this hike came highly recommended for a reason and hoped it was for the rim track. 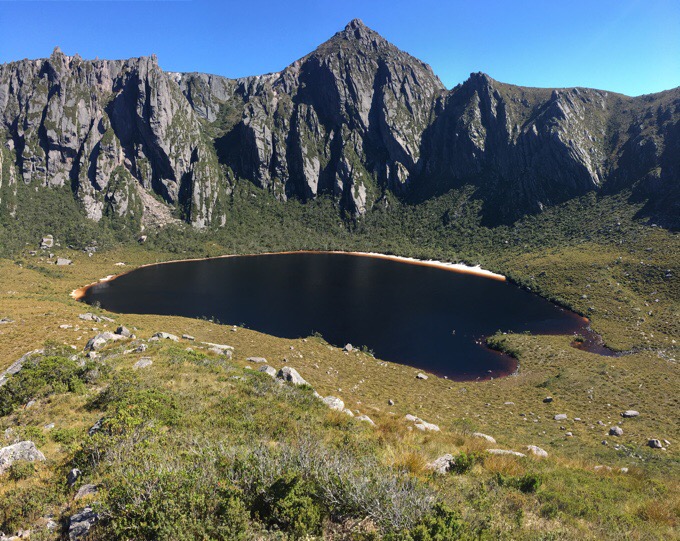 At one point, as we were going around the rim, my diamond necklace that I wear daily (my twin sister and I have matching necklaces we’ve worn the last 17yrs) got caught on a stupid plant and broke sending the diamond pendant flying off into the button grass.

Shit! I don’t think I’ll ever learn with the necklace. I have broken the chain on many hikes and this is the third time I’ve lost the pendant on a long hike. Ugh, it’s so common that it didn’t even bother me at this point. The jewelers where I go in Portland even remember me when I come in with how often I need to repair or replace it. Annoying, but also not the end of the world. It kills me because I did this in the last week of both the PCT and Hayduke, and now I made it 9 months of hiking without breaking it and manage to lose the pendant just three weeks before I finish. So dang close! I even had it in my shirt for the brush, but this section wasn’t brushy. Just a few of those bulbs sticking out hitting me in the face every once in awhile and one somehow snagged the necklace. 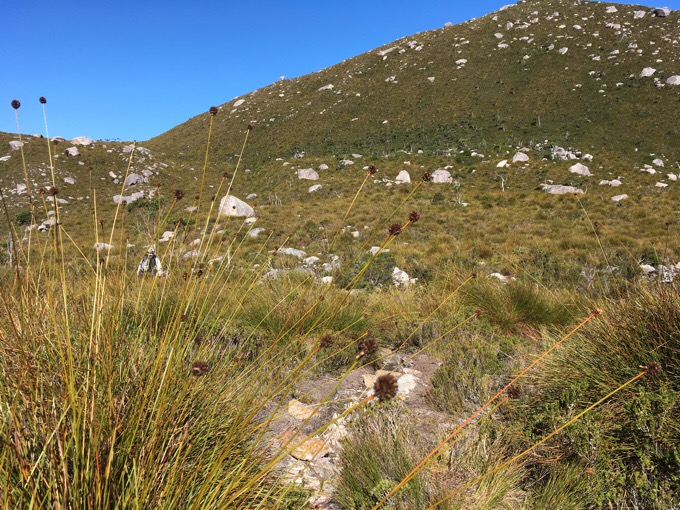 The plant that stole my pendant…

Moving on, we continued around the rim and found out why this hike was so recommended. Great circuit around the rim! It did have grand views and was fun hiking up there. Before we summitted Reids Peak, we took about an hour to sit up top with a great view and plan our next part of the trip. 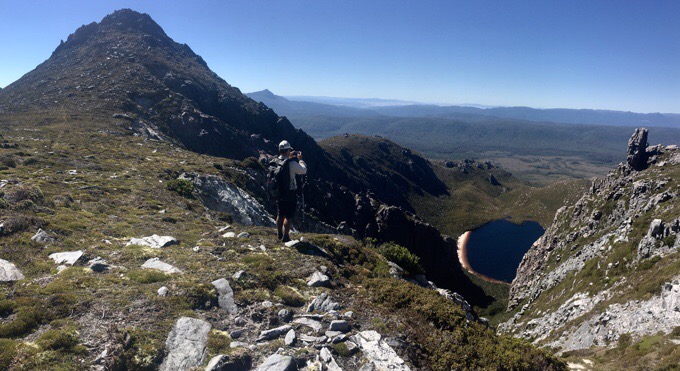 We had service and checked the weather. The rain should move in the next two days in most places, so we aren’t going to make it to Mt Anne as we hoped next. It can wait. We still have plenty of others on the list to choose from. Of all the options, it seems that our best choice with the forecast is to head to the 84km/53mi South Coast Track. I’ll explain more tomorrow, but it’s a popular one that’s coastal and more remote. So remote that we will be flying in a bush plane to the start the day after tomorrow. We booked everything while up top today, and are happy to have the next phase planned. We will hike out of here tomorrow and drive to Hobart again to return the car, shower, laundry, and resupply before we fly out the next morning. It will be something different for sure from what we’ve been doing. Sand and ocean, here we come!

We continued on the rim track up Reids Peak, which had a short scramble the final stretch to the top. Great views from up top and totally worth the efforts to get out here! 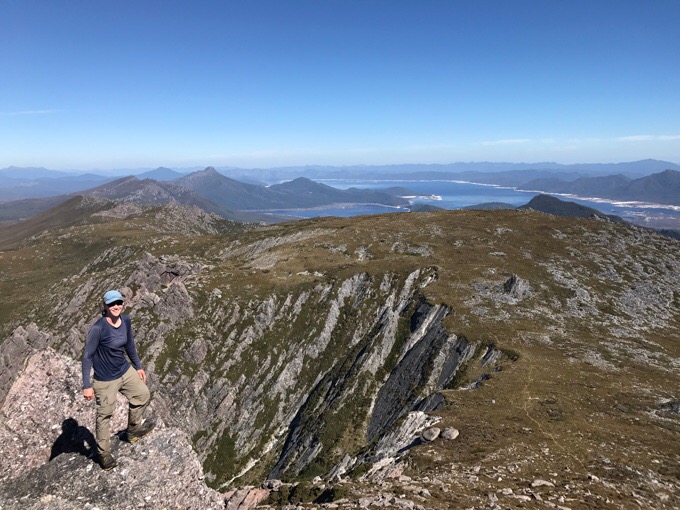 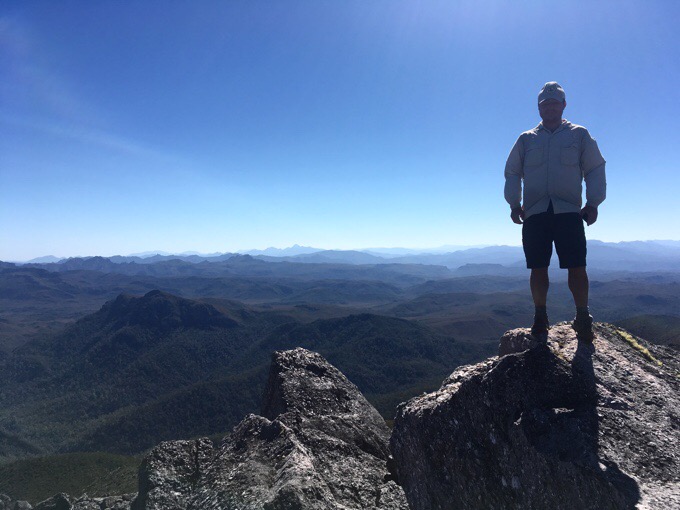 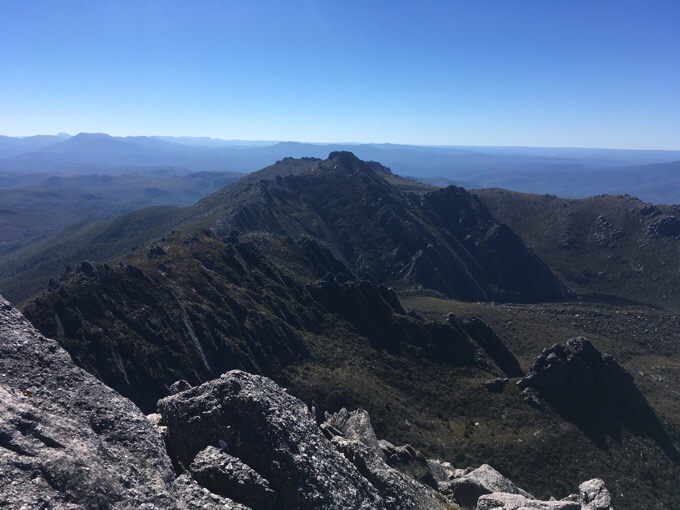 The rest of the rim hike heading back down to Lake Rhona was great too with new views at each turn. We made it down to the beach at the lake and just one couple was there. 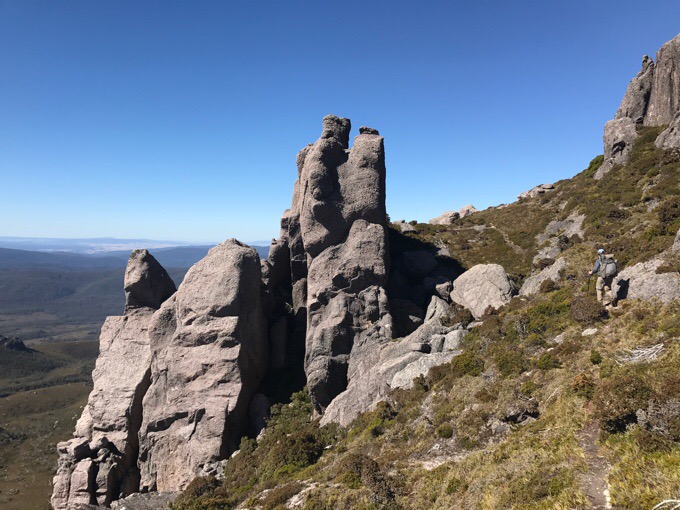 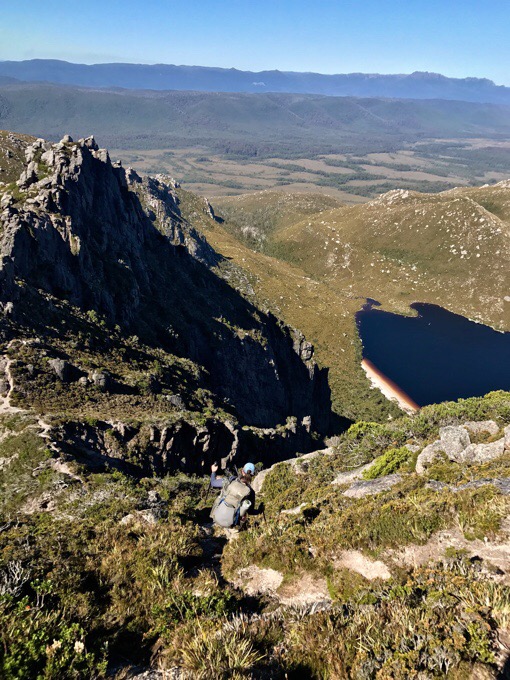 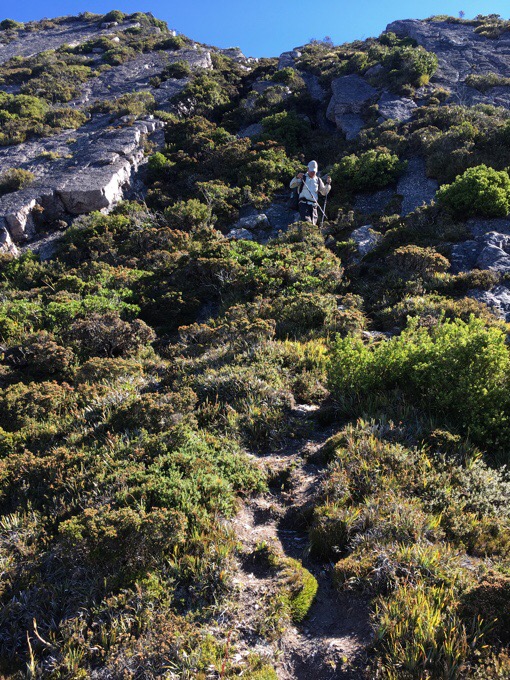 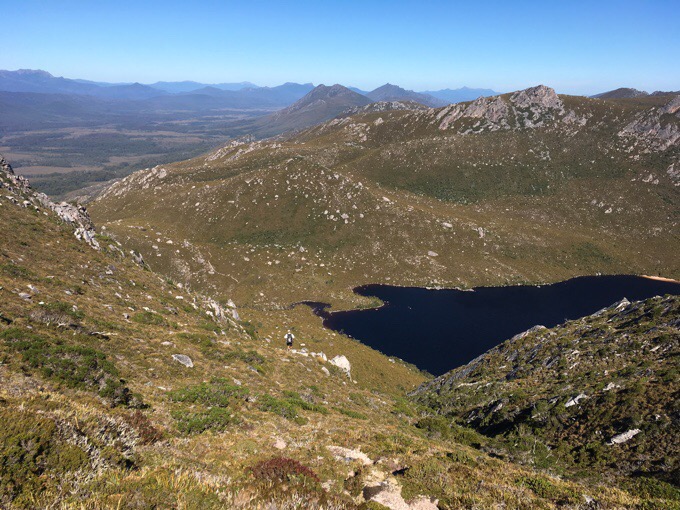 It was still only 3:30pm, so we chose not to stay at the lake. Neither of us are much for destination campsites unless they fall more conveniently at the end of a day. We figured we had enough time to take in the lake views all afternoon. Plus, neither of us are water or sand camping people, so it just wasn’t calling us. We knew there was some good camping about an hour and a half back near a stream, and aimed for that. 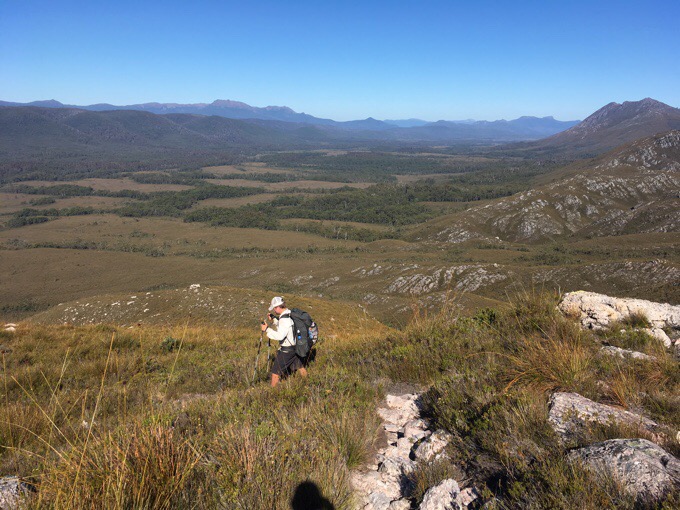 We finished just before 5pm, and chose not to push on to the next camping option. When we saw it this morning, it was a really wet and cold spot, and we knew it would make for an uncomfortable night and morning. We are hoping the spot we picked will be a bit dryer and warmer. Already, the temps had dropped significantly and it’s not even 9pm yet. It seems it will be another cold one, but hopefully it will stay well above freezing. We aren’t looking forward to all that cold wet brush again tomorrow morning, but we know we have a nice dry warm car (with seat warmers!) waiting for us at the trail head! 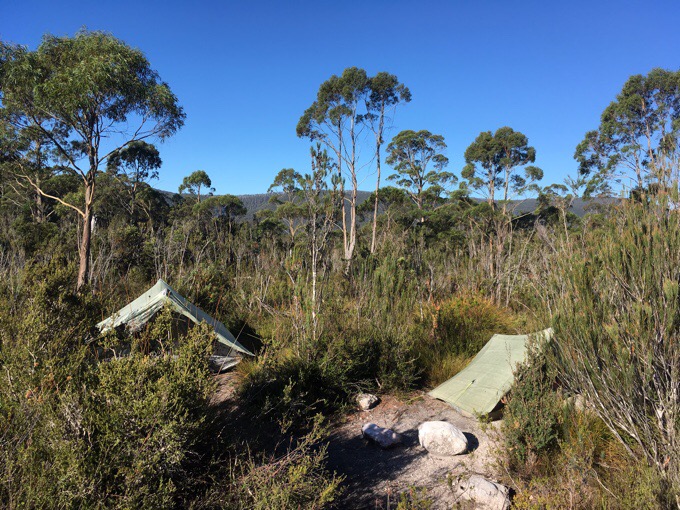