We reported back to Par Avion this morning and thankfully clouds lifted just enough to fly out today! It was a smooth ride in the small bush plane that held eight people including the pilot. We even each got our own earmuff headsets to hear the pilot and also all the chatter with technical stuff from the control tower and the other plane ahead of us. It was a first for me flying in this type of plane and was a fun experience. Griggs loved it as the plane was similar to what he’s flown before in his hours he’s put into getting his pilot’s license. 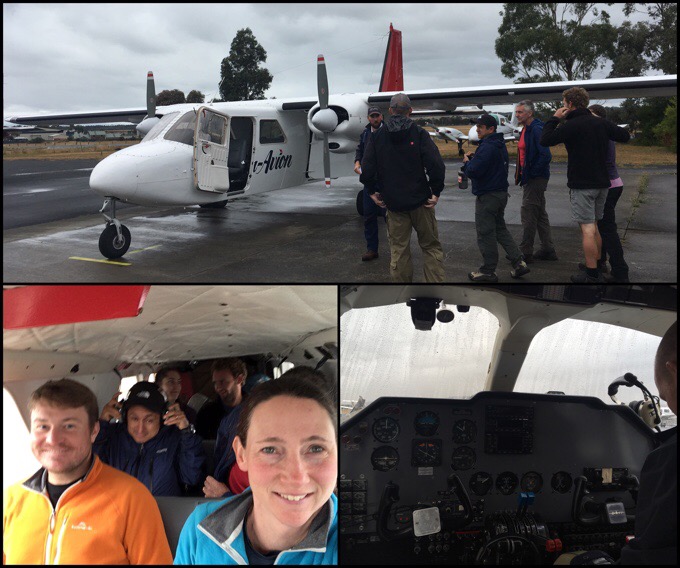 The flight was about an hour long and flew pretty low below the clouds at about 1,500ft/457m. We flew right over the South Coast Track and followed it pretty much getting a preview of what we’d be walking. It was surreal to be flying over Tasmania. I felt like I was seeing those views they show in the credits at the beginning of Survivor. 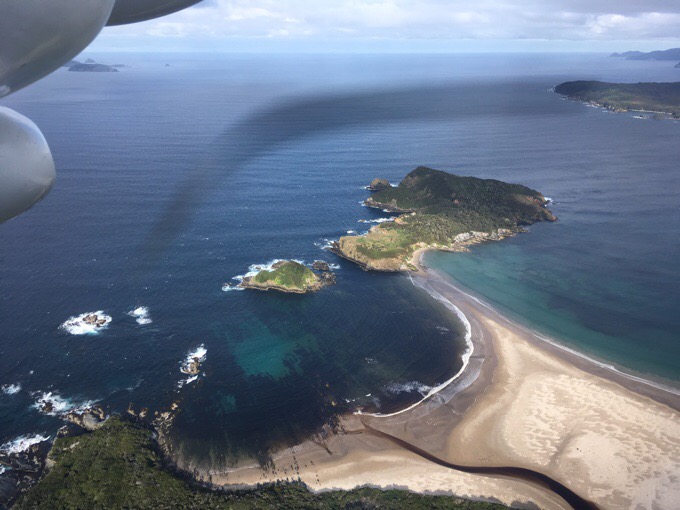 The line in the photo is from the plane’s propeller. 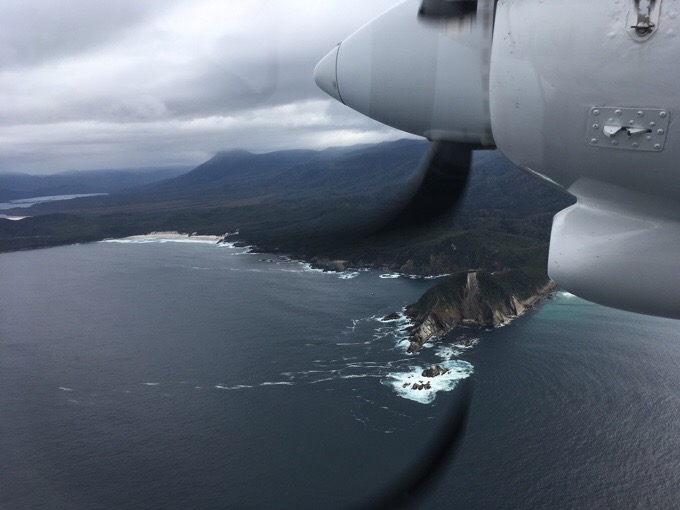 We landed on a small dirt/sand runway at Melaleuca, which wasn’t a town so much as a basic launching point for a couple hikes. There isn’t a road in, but some choose to hike in on the Port Davey Track, which saves you the $300AUD/$238US to fly, but is a bushy muddy track that takes at least 3 days and we heard just isn’t worth it. About half the people we were with were doing the South Coast Track. There is also a shorter one called the Southwest Coast and something that is more of a guided wilderness camp out of nearby base camp. We started hiking at 10:40am mostly on easy boardwalk for a couple hours towards the coast. 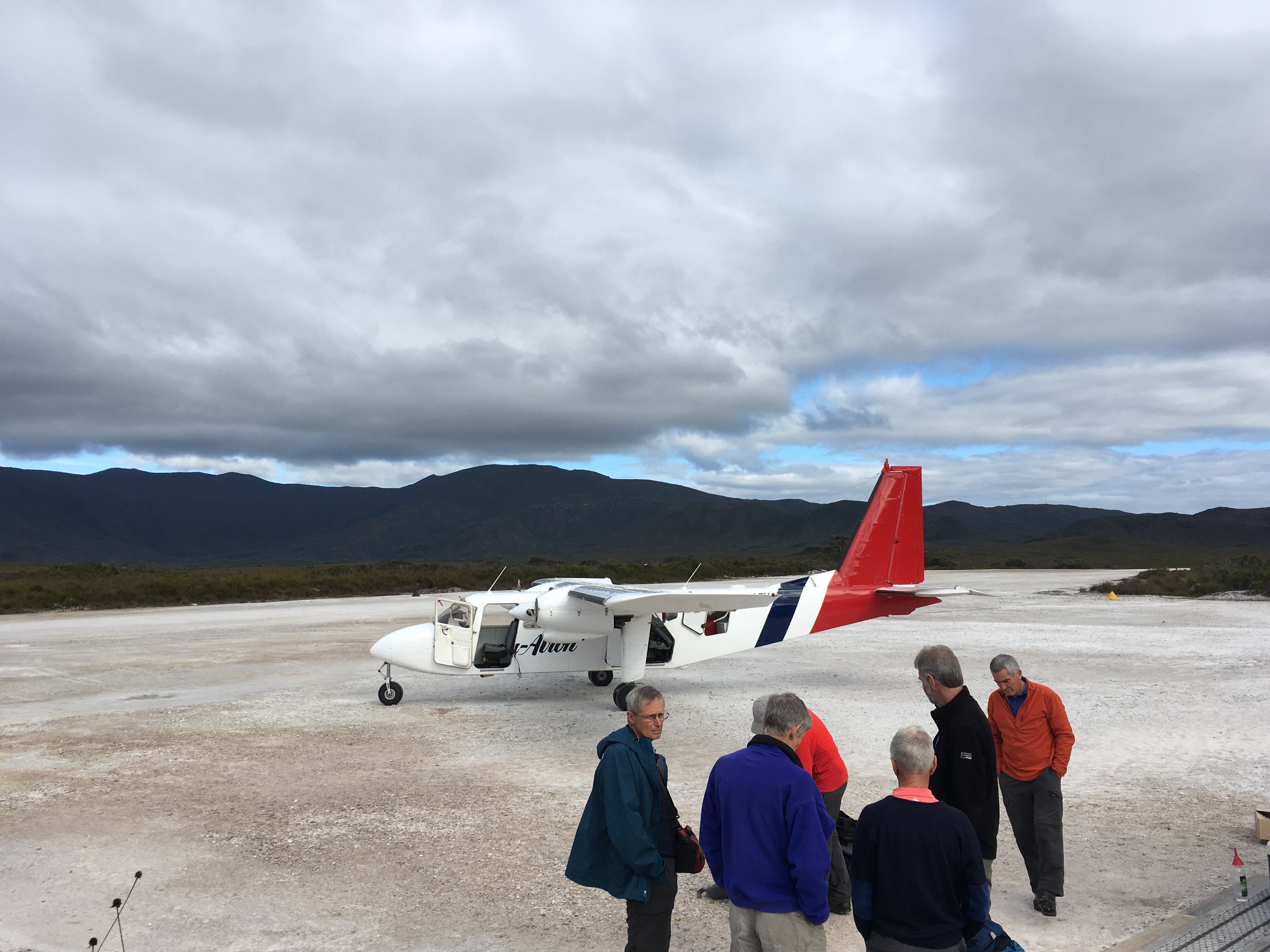 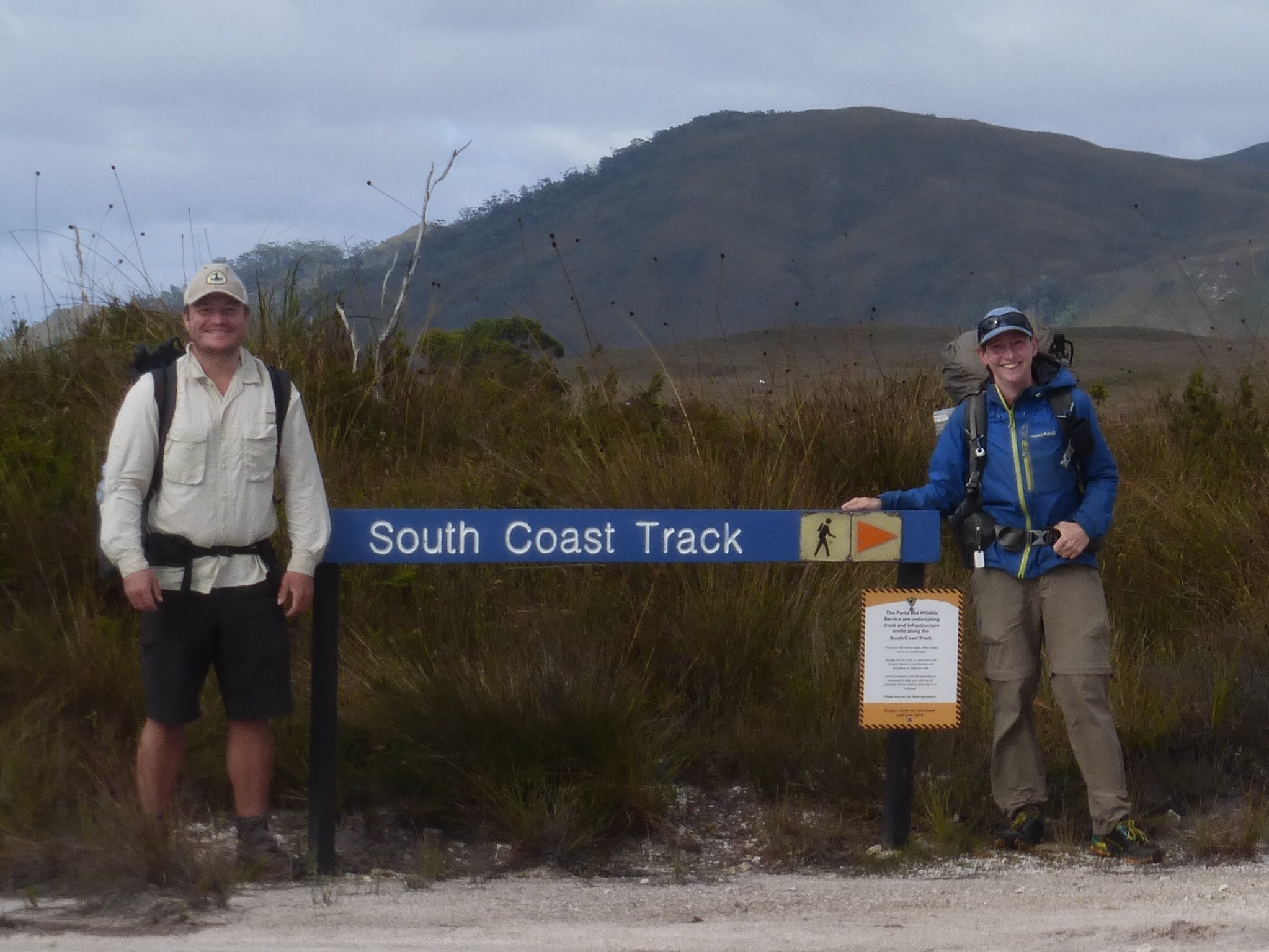 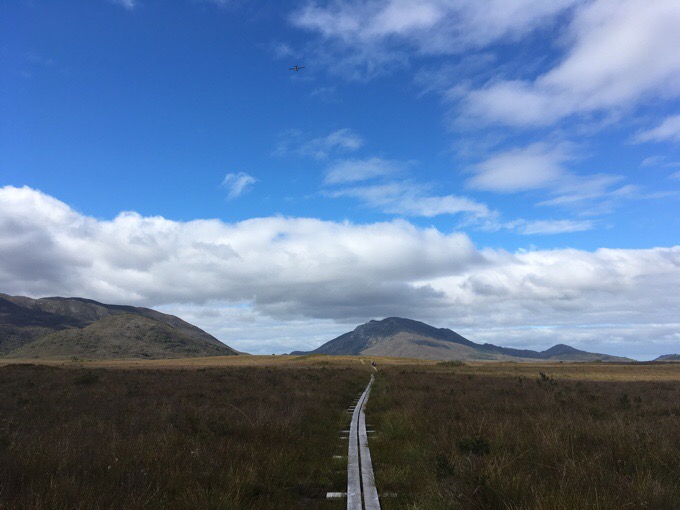 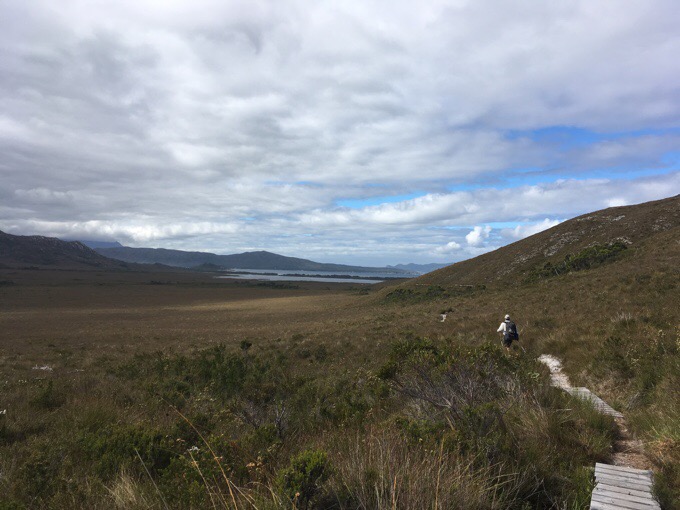 This track is known for being muddy and remote, but we will be benefiting from some trail improvements with lots of boardwalks to avoid the mud. We quickly found out, it was much faster going than we anticipated, and we may have brought food for many more days than we thought we’d need. We thought maybe the 85km/53mi could take 5-6 days, but now it looks like we might finish in 3 days. Much heavier packs than we need. Time to start eating. I know some may say we are doing this too fast, but we are just walking and not pushing. It’s not our style to walk half days and lay on the beaches. We enjoy them as we walk, but it’s cool outside and we don’t feel the need to stop and lounge on them. 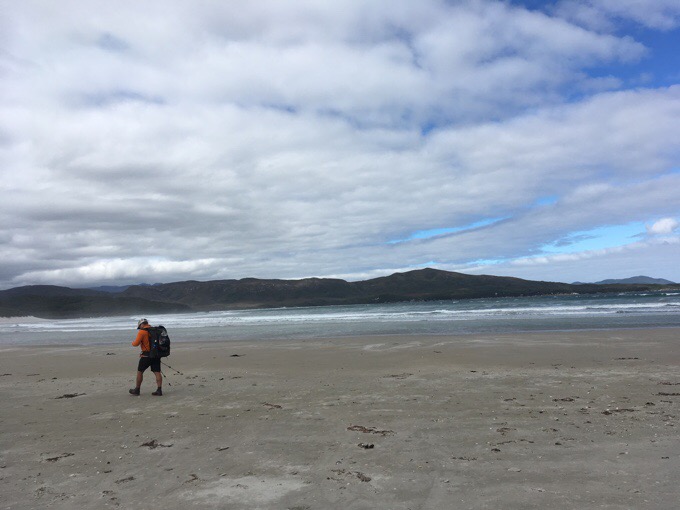 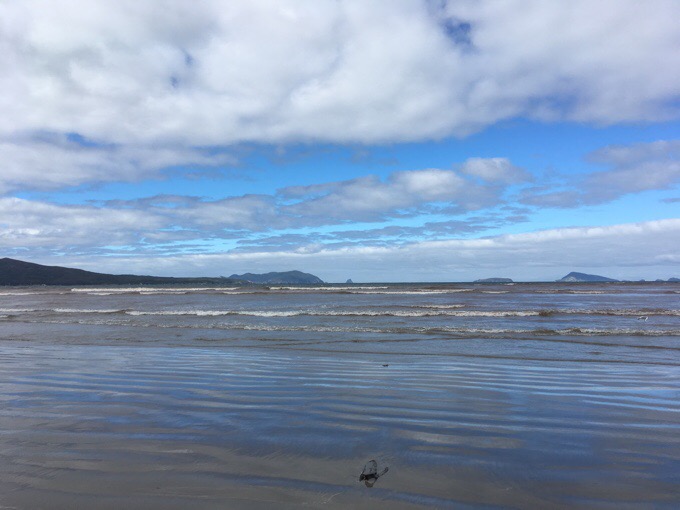 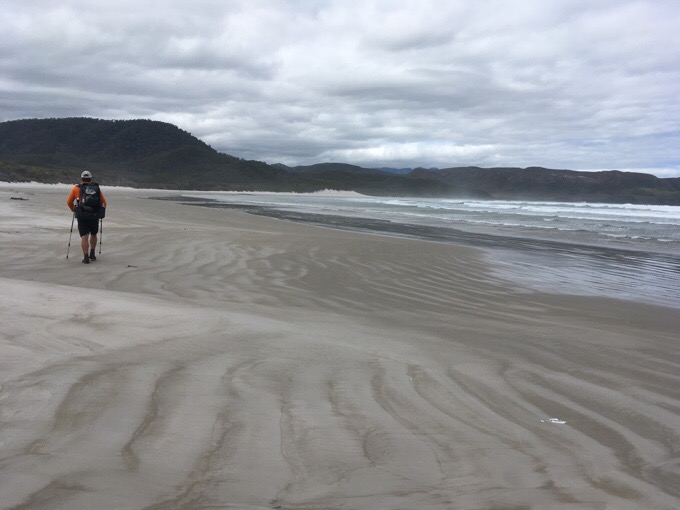 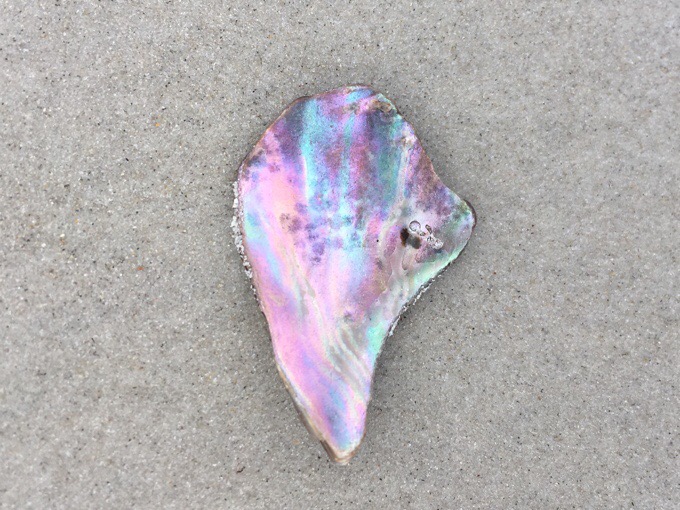 It was a relaxing day with portions of beach walking and the rest a bit inland. It’s been quite dry out here lately, so the areas that could be muddy aren’t. We managed to keep dry feet and even removed our shoes for the three river crossings towards the end of the day. 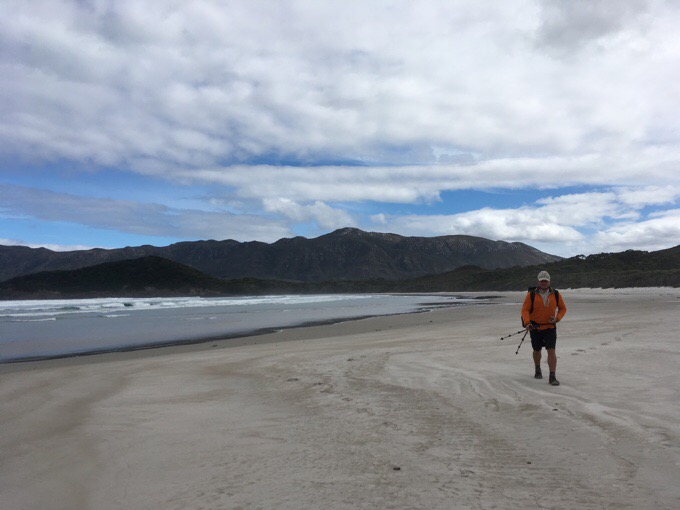 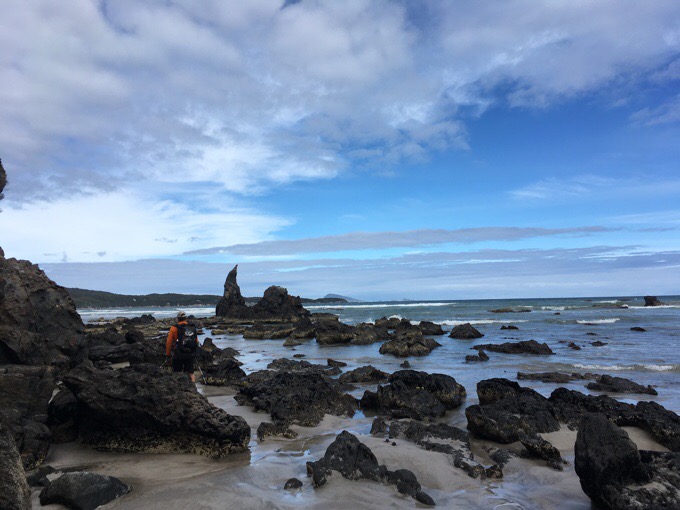 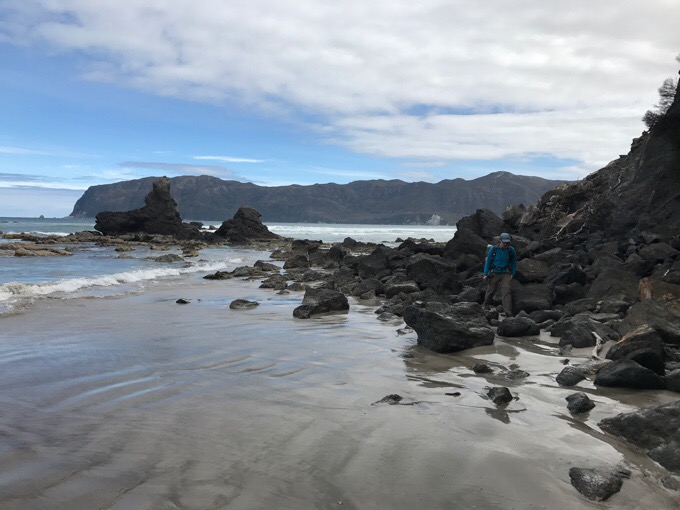 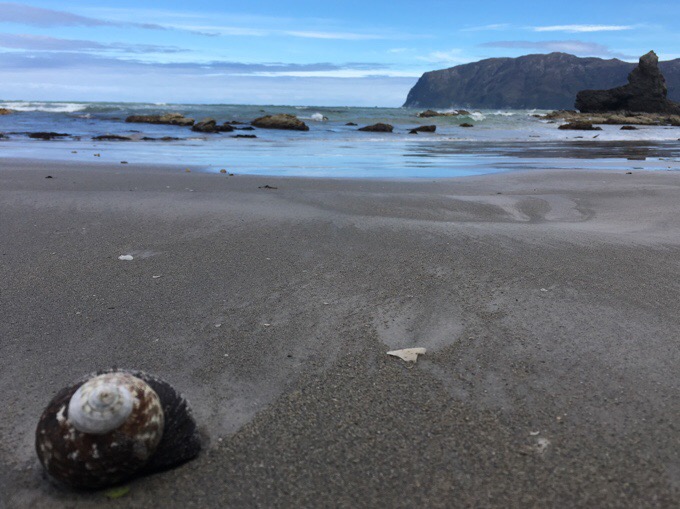 Griggs doesn’t carry camp shoes, so he was able to use my flip flops I could toss across to him on the first two, but the final crossing was too wide. He attempted rock hopping and got his feet wet just before we got to camp. Man, so close! 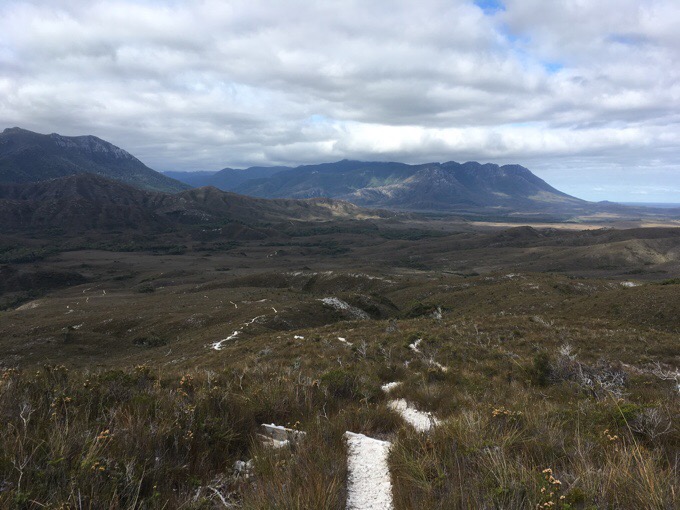 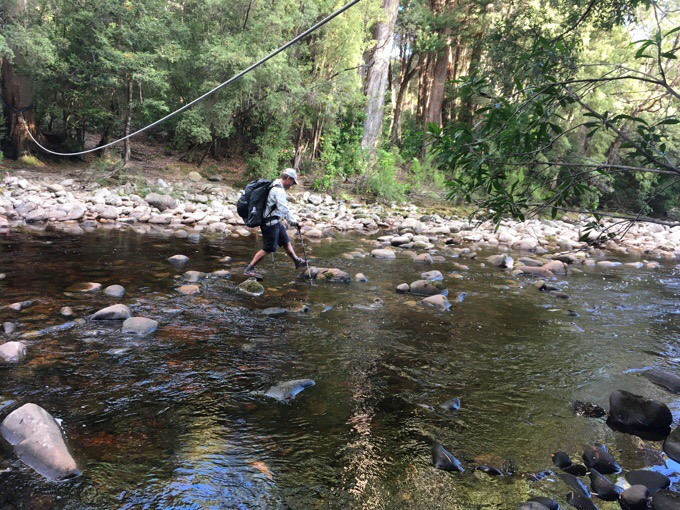 We had just one decent climb today, and tomorrow is the big climb of the trip over the Ironbound Range. This is the one part we want to have clear weather for. We saw one group hiking the other direction that said it’s been socked in by clouds, but it cleared at the end of the day today and tomorrow looks to be clear, so we may have gotten the timing just right to hit it tomorrow morning and get a clear view, yay! 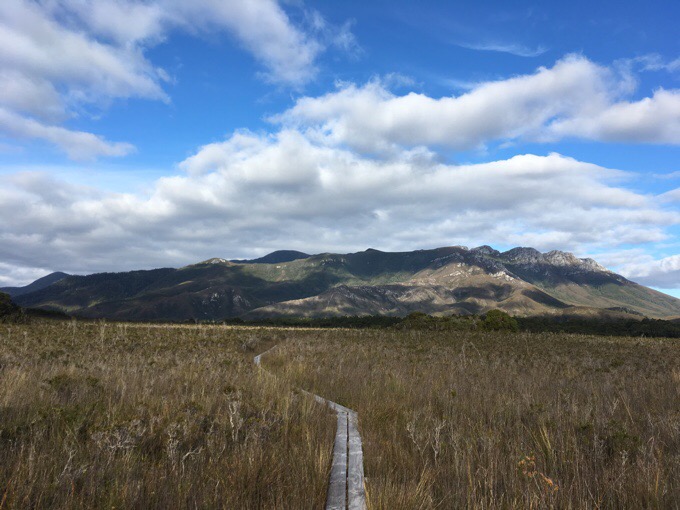 Te Ironbound Range we will go over tomorrow.

We had a choice of a side hike earlier that would have landed us at Louisa Bay for camping on the beach, but neither of us are drawn by that. We are much more attracted to forested camping with a nice stream nearby. I know beach camping sounds dreamy, but in reality, it’s windy, cold, damp, and sand gets in everything. We both had no pull to the beach, so we chose the Louisa River campsite and arrived at 6pm. It’s just our kind of campsite. In the woods, protected, a stream running nearby, and nice spots to pitch tents. There is one other tent setup further away out of sight, but other than that, no one else. 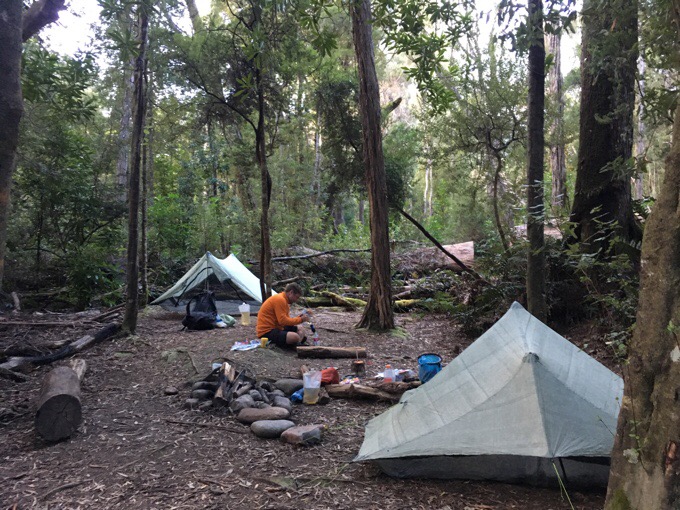 We knew that since no plane came in yesterday, we’d see fewer people today, and that was nice. Pretty cool to be hiking out here and have such a cool place with few others around. There’s a proposal to bring more guided trips out here and construct huts that many oppose since the remoteness is what draws many here. They say the huts would be off the track and out of sight, so it would just increase traffic a bit. We were on boardwalk half the day, so things are definitely changing on this track and it’s becoming more like the Overland it seems. We seem to be hitting it at the right time benefitting from the maintenance, but before the crowds increase. I am pretty tired and actually going to sleep before 9pm tonight.