I slept a lot last night. I usually wake up in the middle of the night or earlier in the morning when I fall asleep before 9pm, but I didn’t. I guess I needed the sleep. We had the big climb up and over the Ironbound Range this morning. It was a 6km/4mi, 900m/3000ft climb and then right back down the same distance and elevation on the other side. We left a bit later than usual at 8am to hopefully allow for morning fog to burn off by the time we went over the range. We saw some clouds lingering on top as we headed up. 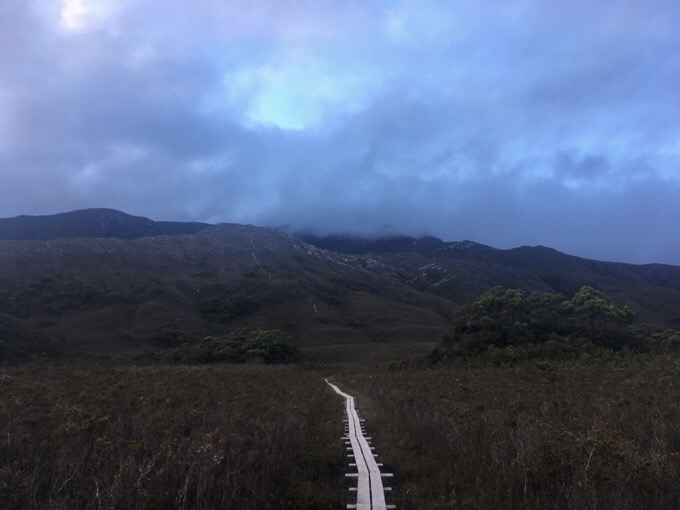 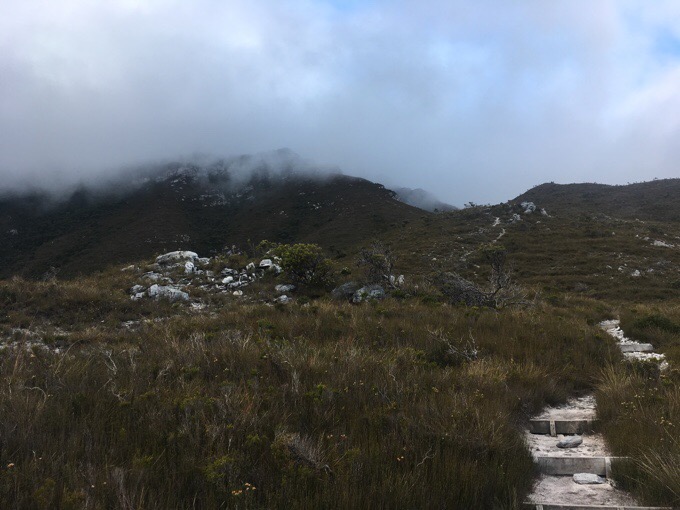 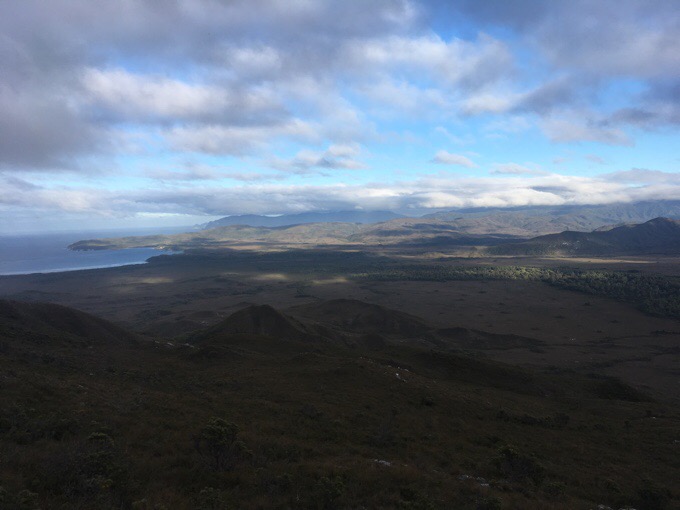 View looking back along the coast.

Unfortunately, the clouds didn’t lift as we went over. There were moments of hope with brief views, but no luck with the full view. We heard that it’s common and can be rare for people to get a view going over that range. At least it was nice out and we didn’t have to deal with poor weather. We were ok with it since we got to see so much flying in yesterday and have an idea of what we would have seen. This track was less important for us to time the views to be super clear because our plan was to do this one when there were more clouds or poor weather that we are waiting to pass to then hit more mountains. 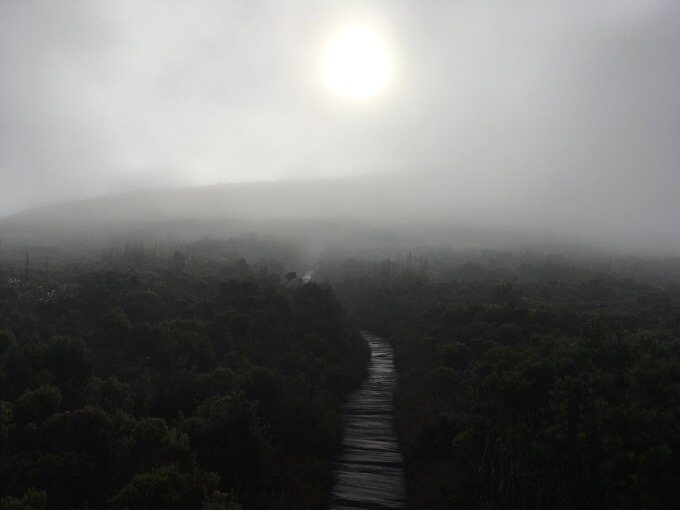 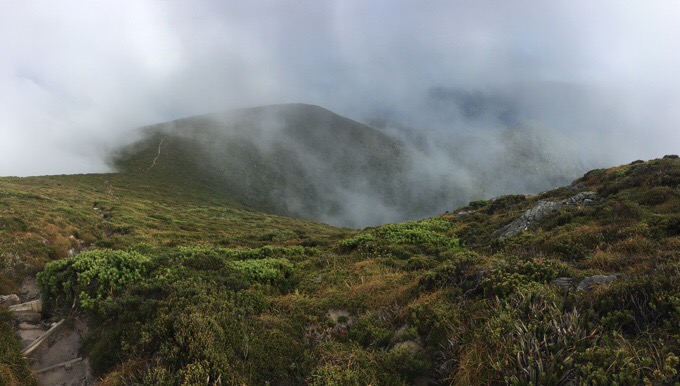 View looking back along the ridge. 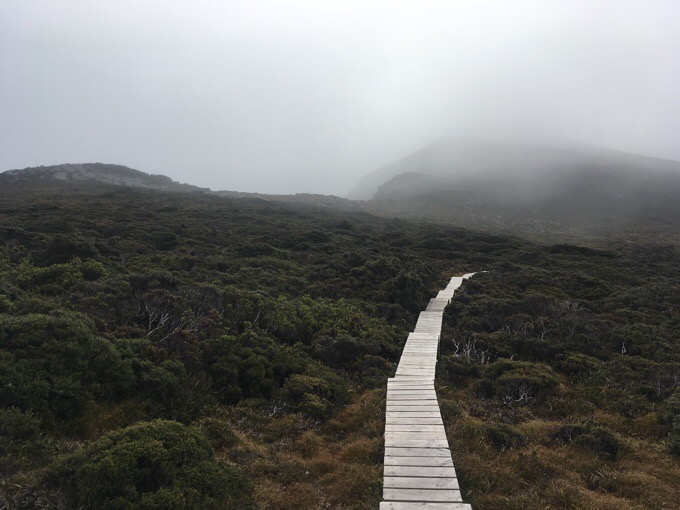 The descent was the same elevation and distance as the ascent, but seemed to take forever. It started out with some boardwalk up top before the slow stuff came. There was first a narrow ditch for awhile that had plenty of brush to make my pant legs wet. Then the roots, rocks, and mud came most of the rest of the way down. 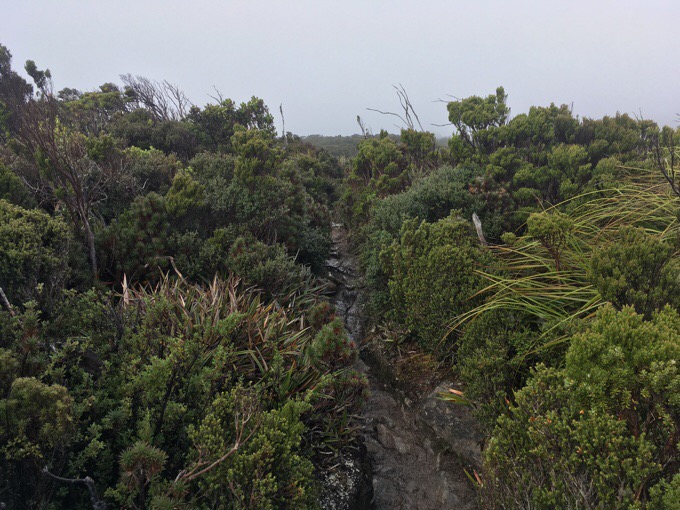 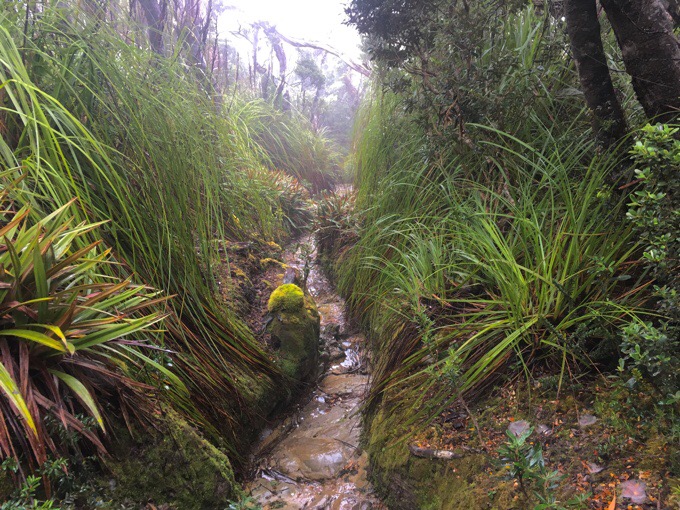 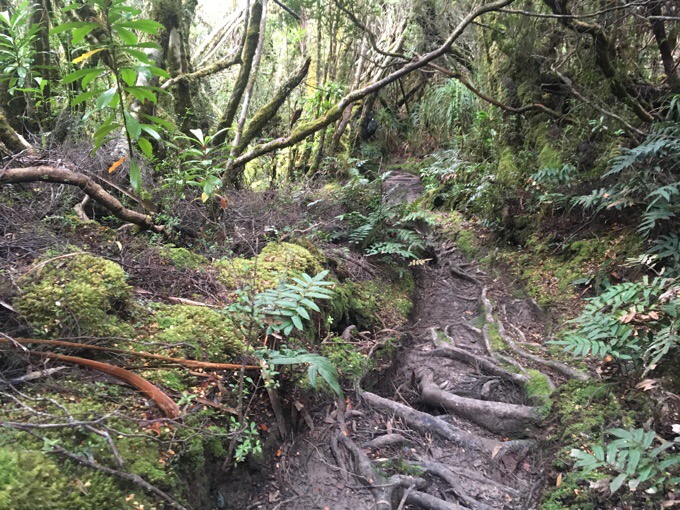 It was slow going not to slip and reminded me of the Te Araroa forests in New Zealand. It felt like an eternity before we made it out to a dry wooded track that led to Little Deadmans Bay, where we had lunch. It was nice out, and a great spot for lunch near the ocean without dealing with sand. 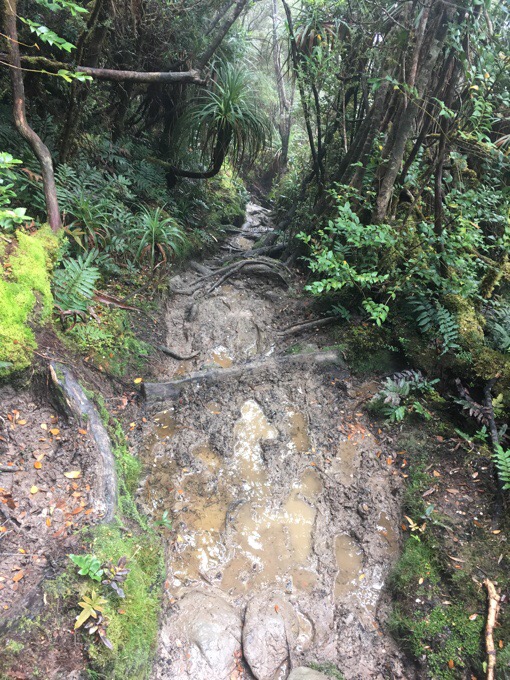 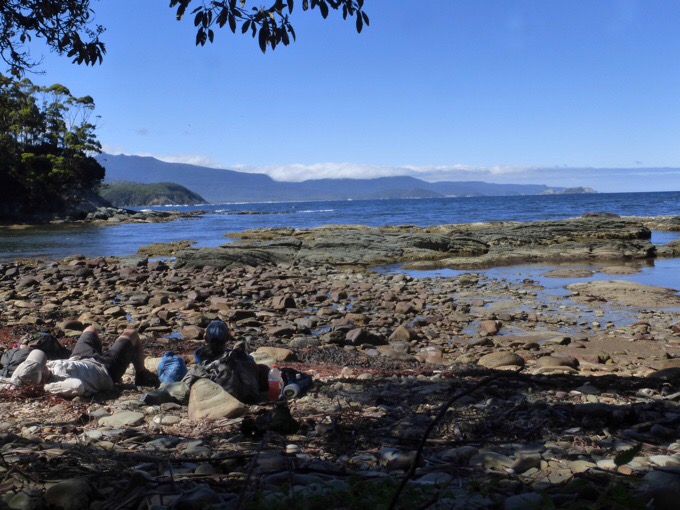 Today was Griggs’s 34th birthday! He doesn’t indulge much in junk food on the trail because he knows he’d just eat it all and somehow has the self control to not buy it at all and just eats peanut butter, tortillas, salmon, and bars. I knew he’d appreciate some different food, so I carried in a Coke, a sleeve of Oreos, and a dehydrated meal of Butter Chicken that I could boil water for since he is stove-less. It was a hit and fun to give him after the climb and never ending descent this morning. 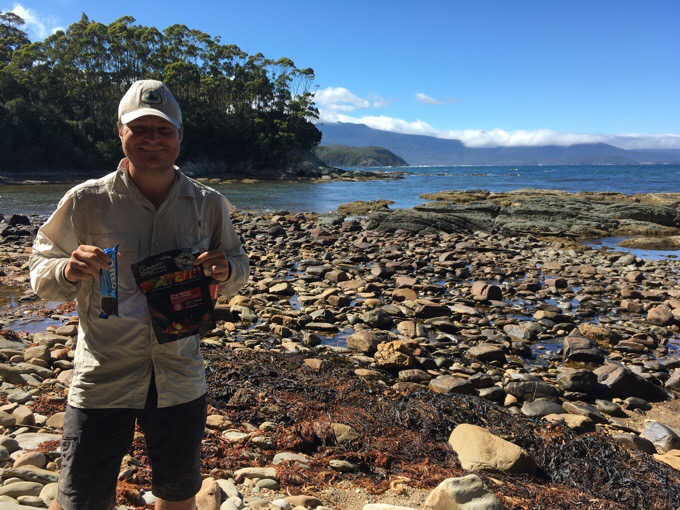 The rest of the day was a mix. Some beach, some boardwalk, and some slow brushy stuff. 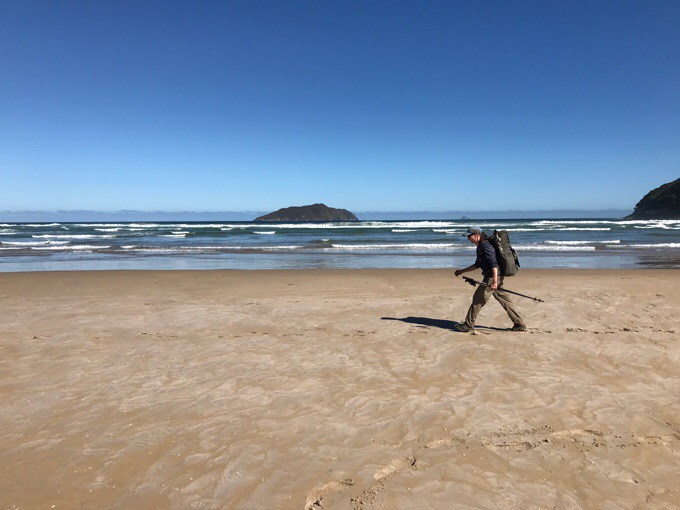 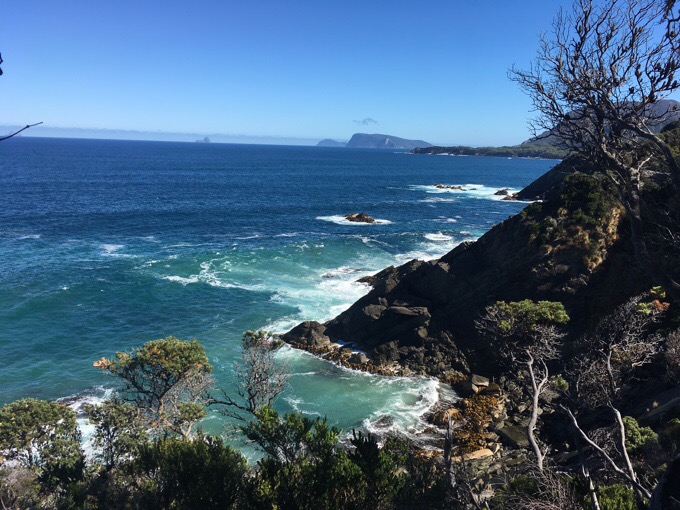 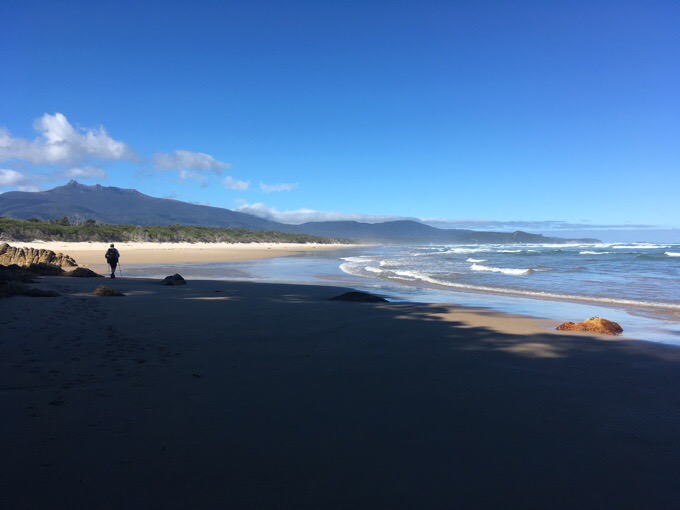 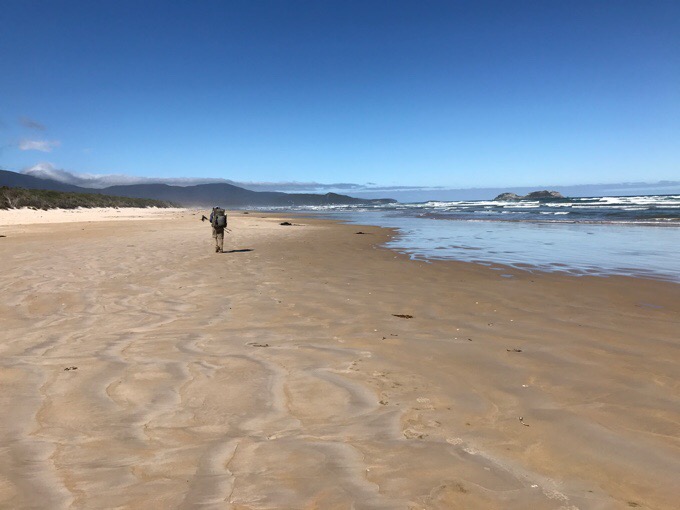 There was the New River Lagoon crossing that has row boats that hikers can use to cross. There are three boats total, so if you row the last boat over from your side, you then have to row another boat back over and then cross again for the third time after leaving the boat on the other side so there is at least one boat on each side. We had to do that, and it took a good 30mins to go across three times to make sure there was a boat on each side. Those boats are heavy, and it would have been pretty tiring to do that solo. 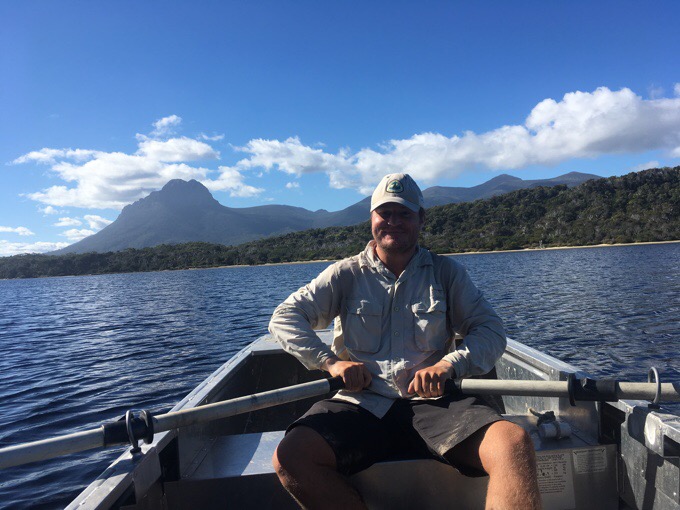 After that, there was a rerouted part of trail that was fairly short at just 1-2km, but taxing as it was cut right through many trees that had to be negotiated as the trail undulated. By the time we did that, we agreed that it had taken long enough that we’d stop a campsite earlier than our original goal. This was definitely a slower day, which was to be expected. We put in over 2hrs more of hiking today and did 4km less. That’s how slow going it was compared to yesterday’s cruise on mostly boardwalk and beach. 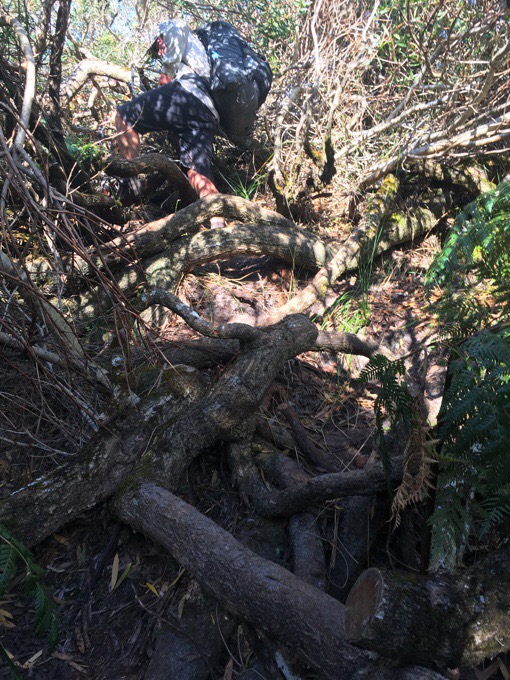 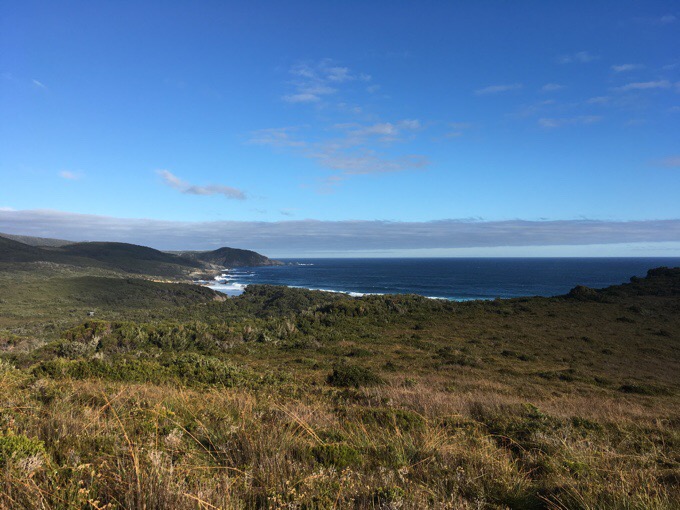 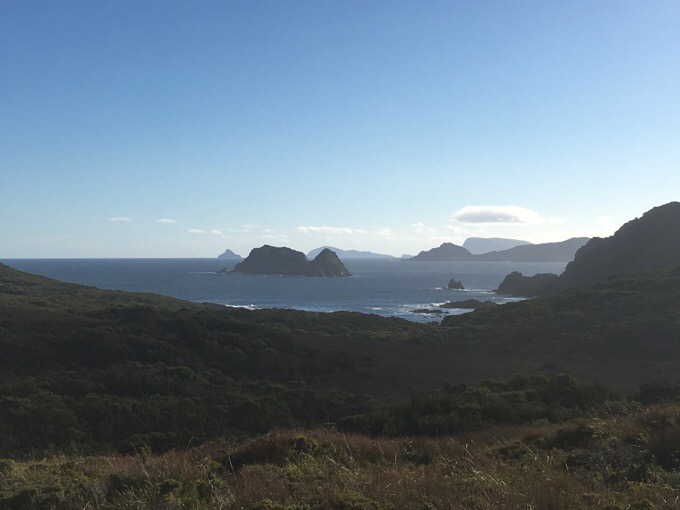 We ended at Osmiridium camp at 5:30pm. There’s a beach not far from camp, but we were fine to just hang at camp and eat away from sand. We just didn’t feel a pull to head down there and aren’t as drawn to beaches as much a others may be. We got to walk on beach a couple hours of the day today, and got our fill. Griggs had his birthday dinner I gave him and enjoyed it. It was fun to treat him to a birthday dinner while on the trail. The water out here is quite dark with all the leaves and low flow. It doesn’t taste any different though. Just odd to drink water that looks like cider. 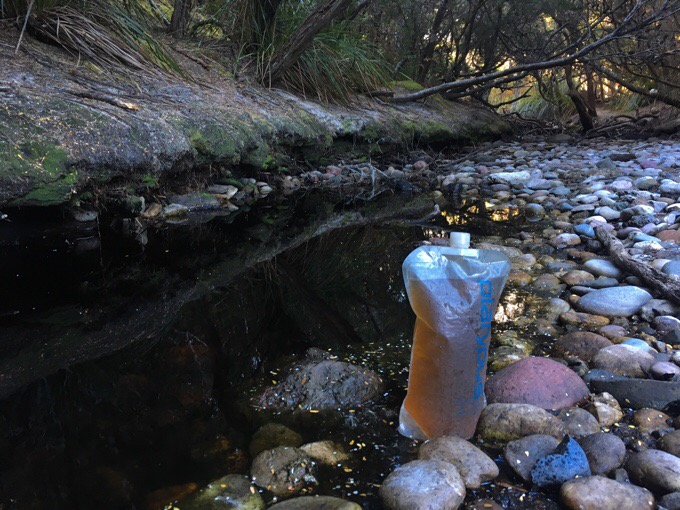 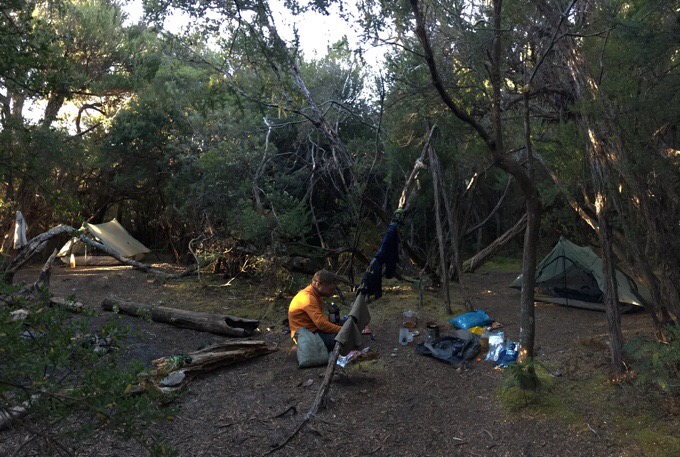 As it was getting dark, the guy with the tent at our campsite last night arrived. I got to talk to him a bit, and he’s been out for about a week having hiked in on the Port Davey Track for four days or so before connecting to the South Coast Track. He said it was terrible and super overgrown, but had nice views at times. Again, that confirms our decision to fly in rather than doing the Port Davey. His name is Isaac and he has a ride picking him up at the end, so he may be able to give us a ride back to Hobart. We are finishing tomorrow, and hoping to hitch back to Hobart because the bus option is $150AUS/$119US for the 3hr ride, but we might be finishing too late tomorrow to hitch. We’ll see how timing goes. Cockle Creek is the endpoint, and seems to be a tourist destination, so there should be traffic, but there is also camping there if we need to wait till the next day. This track went by a lot faster than we expected. Again, I’m falling asleep early around 9pm. It must be the cool ocean air and the sound of the waves lulling me to sleep.