Day 19: Heading To The Three Capes

March 24th
Cockle Creek-Wughalee Campsite
Mileage: 8km/5mi
Campsite Elevation: 141ft/43m
We got to sleep in a bit before Isaac and Gabbs gave us a ride back to Hobart. I was happy to get an episode of Downton Abbey in and we left by 8:30am. It was a two hour drive to Hobart, and worked out perfectly to get the morning ride. THANK YOU Isaac and Gabbs!

We realized we had the timing to be able to rent a car and bounce right out to our next hike, so we did that and ran some errands before heading out to Fortesque Bay. Griggs needed a new hiking shirt as his finally started to shred after 6 months of daily hiking use. We ate lunch at Subway (of course!), found a cafe with wifi to download some things, and resupplied. We think we may be jumping to shorter coastal hikes on our list that are on the east coast for about a week as that is where it is driest, so we got a week of food and are keeping it in the car to pull out what we need for each overnight. It’s so convenient to have a car! We got an even better deal than last time, and are each paying $9.50AUD/$7.50US per day to have the car. That doesn’t include gas, but we aren’t using much since the drives are only 1-3hrs between hikes, and insurance is covered through a credit card. Quite a great deal! Many people are interested in our resupplies, so here’s photos of what we each eat. 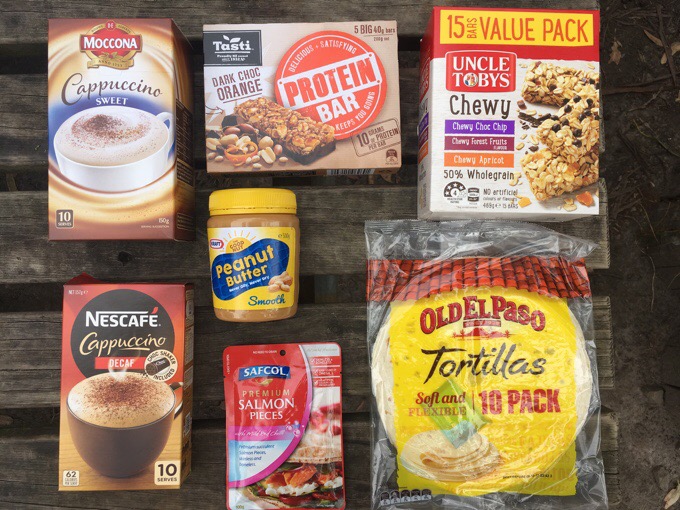 Griggs is super routine and has little variety. I swear he’d be great for the military. He loves to indulge in food in town, but is simple on the trail looking for the most efficient way to stay fueled. He rarely treats himself to cookies or chips on trail too. His routine is to have two tortillas for each meal of the day. The morning ones are peanut butter and the afternoon and evening tortillas are one peanut butter and one salmon or tuna packet. He doesn’t get tired of it and has been doing this for much of the last two years on the trail. Between meals, he has protein or muesli/granola bars every so often. He does enjoy cold coffee with every meal. Sometimes caffeinated and sometimes not. He would do a flavored drink mix in the day, but Australia doesn’t have good ones. Yep, he’s almost as basic as you can be, but he is sure to treat himself in town. I just don’t have that self control on trail. 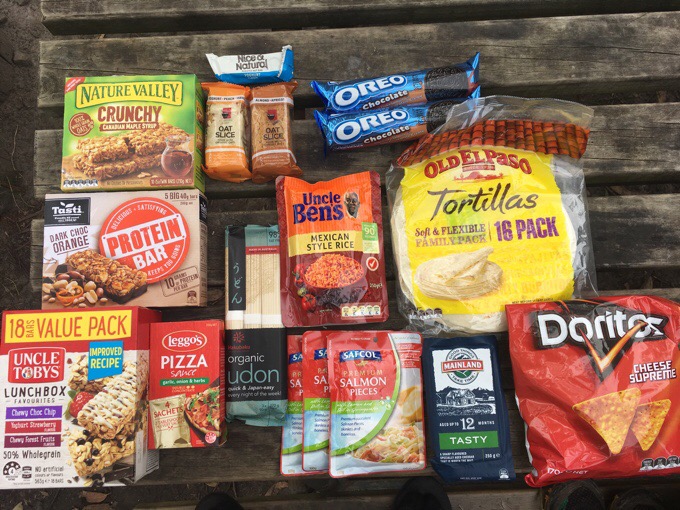 For my food, I’ve found that I quite enjoy the options in NZ and AUS. I’m going to miss the bars I’ve been able to find and am not sure I want to return to Clif Bars. In NZ I had an OSM Bar for breakfast and miss them, but like the dense Oat Slices here in Australia. Then I eat 3-4 bars as I walk before lunch. At lunch I have Doritos or Pringles, Oreos, and a large tortilla (or two small) with salmon/tuna and cheese. Then I have maybe a couple bars as I walk in the afternoon. For dinner, the legs out here and in NZ have been short, so I’ve been indulging in two heavier dinners I alternate and love. One is an Uncle Ben’s Mexican Rice (precooked) with cheese wrapped in two large tortillas (I really miss the awesome Freyas Tortillas in NZ!). The other dinner I eat is udon or soba noodles with salmon and a concentrated tomato paste sold in packets or tubes. Oh, and Oreos for dessert of course. Love it!

So once we were all resupplied, we drove 1.5hrs to Fortescue Bay, where we will do Cape Pillar and Cape Hauy. These are two of the capes that are part of the expensive new “glamping” track known as The Three Capes Track. This was not on our original list as the full official track is somewhere near $500AUD/$400US and includes a ferry ride and staying at nice huts. Locals let us in on how to do the two best capes (Cape Pillar and Cape Hauy) that really have spectacular views as an overnight (or two if people want to do it more relaxed) at a free campsite, score!

For details on this, just Google “Tastrails Cape Pillar Circuit” and it’s all laid out for you. We’ve been using tastrails.com for most of these short hikes, and using the Avenza Maps app for free offline maps, and it’s been perfect. All free and all easily accessible with good detailed descriptions. Very convenient and makes research on all these trips very simple and time efficient. 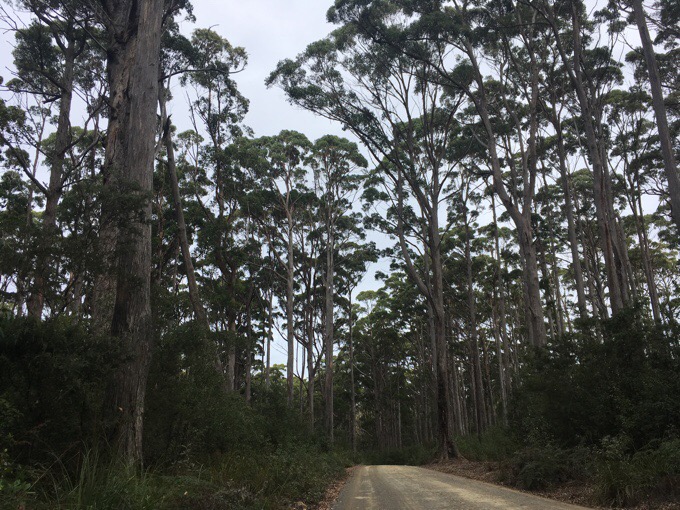 The drive with the Australian trees I love.

We parked at Fortescue Bay (which has a paid camping option by the parking lot) and hiked in the relaxing 5mi/8km to Wughalee Campsite. This is the only remaining free site near the Three Capes Track. 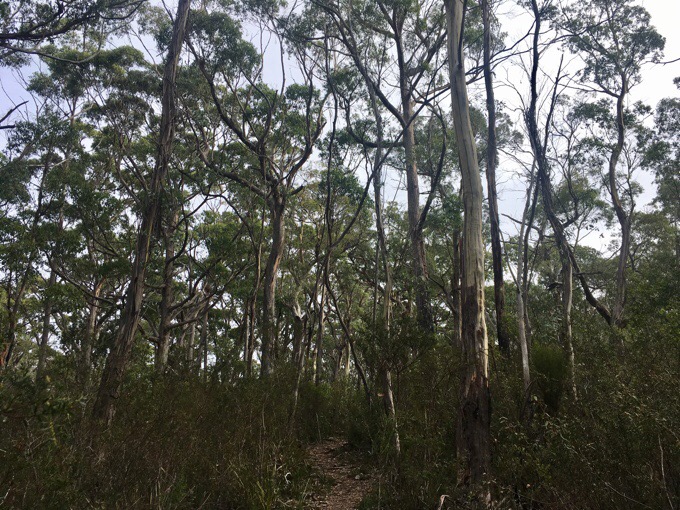 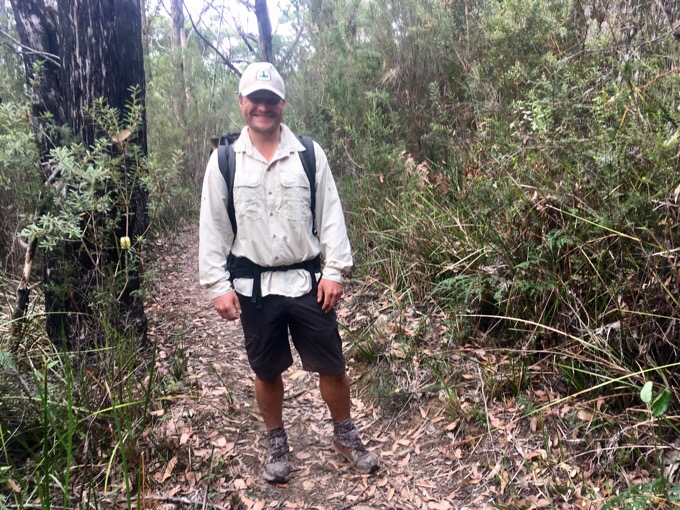 There are plenty of tent platforms, a toilet, and water tanks. There is just one other couple here and it’s a Saturday night. It is known for having many leeches, so we were on high alert. Griggs got one on his leg, I saw one on the tent platform inching near me, and I got one on my hand but got it before it attached. Of course I’m super paranoid and feel things all over thinking it might be a leech as I lay in my tent. A bit of rain is expected overnight, and we had some sprinkles after we setup, but it has stopped for now. Tomorrow should be clear. I can’t believe the great weather we’ve gotten. I really don’t think this is normal for Tasmania, but I will say that it has been raining further west where we still hope to get the Western Arthurs and Mt Anne in, but they really require clear forecasts. 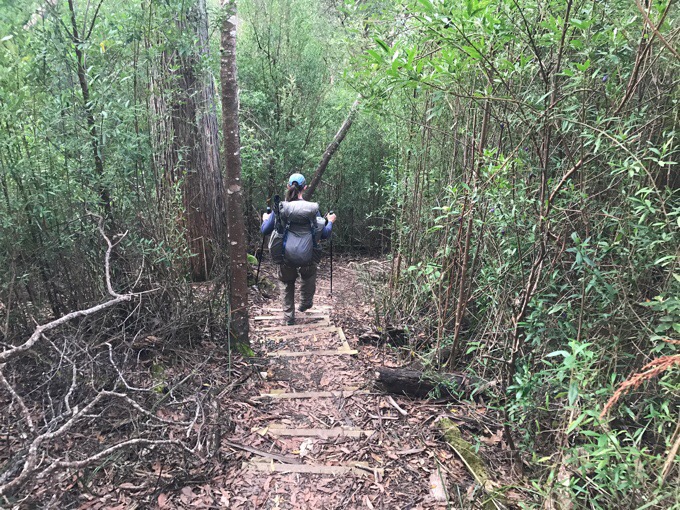 Tomorrow, we will do both Cape Pillar and Cape Hauy. The few photos we’ve accidentally seen and the descriptions are over the top grand, so I’m pretty excited to do this one. Plus, it isn’t a hike that will kill us to get there. It seems like it will be a great day and I’m really looking forward to it. I got to watch the latest episode of Survivor tonight. It was the best tribal ever, haha! THANK YOU to my friend Brian who totally spoils me by getting these episodes available for me to watch offline in my tent. It really is heavenly! 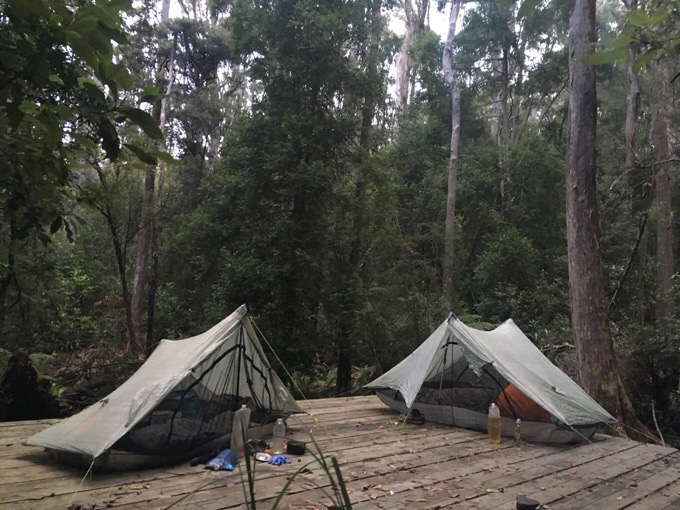