We knew rain was expected the second half of the day today, so it was good timing to hit a shorter hike out and back to Cape Raoul before lunch. This wasn’t on our original list, but we have more time to fill, it’s conveniently close to where we are, and we heard good things about it. There is a local that owns the land next to the parking area that allows people to camp there if people are interested. The track has been around for a long time, but the parks service is now doing trail maintenance to make it really nice. 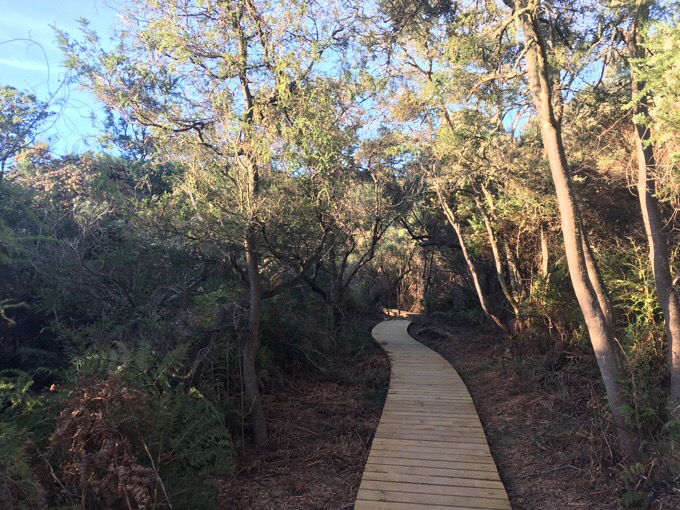 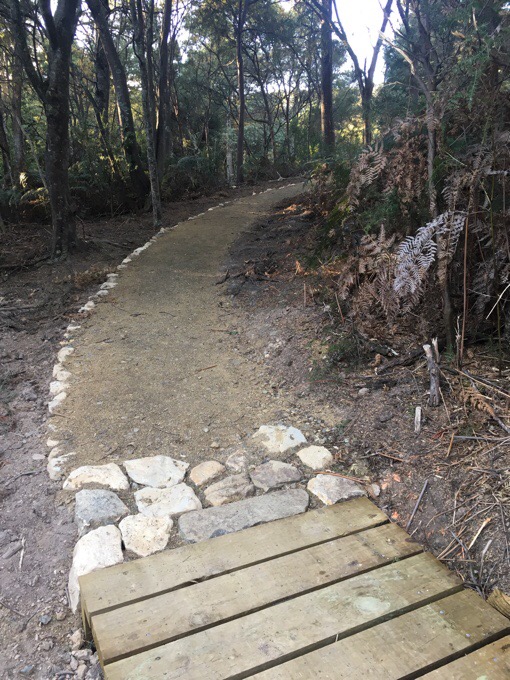 We talked to some of the guys working on the trail, and they said it’s intended to be a “no mud” trail where it won’t become a sludgy slippery mess after rain. We got it completely dry, but could see deep footprints from when it had been wet. The hike was straightforward starting with some nice woods. 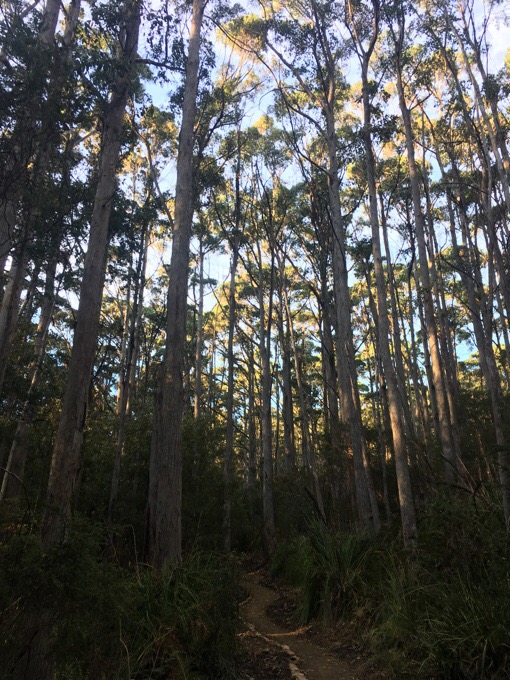 Then there were some coastal views and sights of a nice plateau before dipping back into the woods. Griggs took some great photos today that I must thank him for! 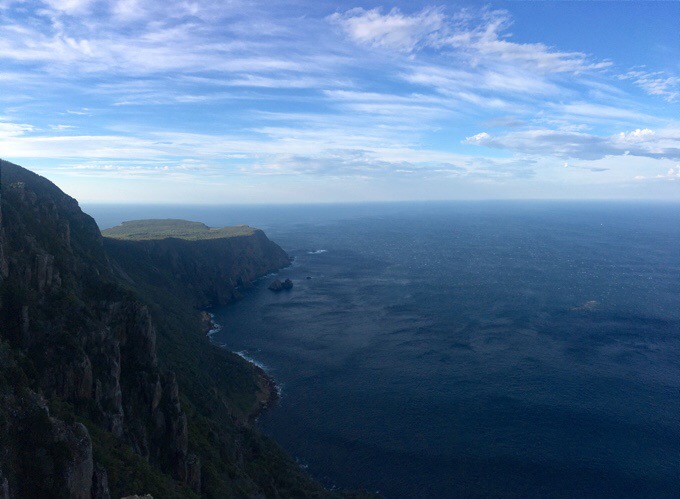 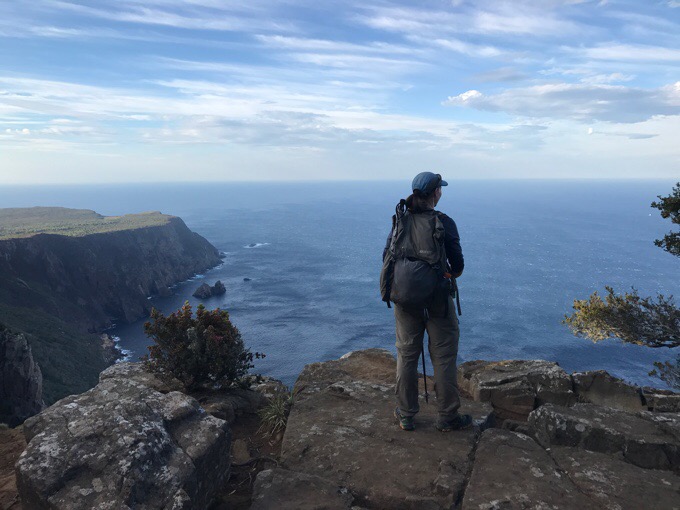 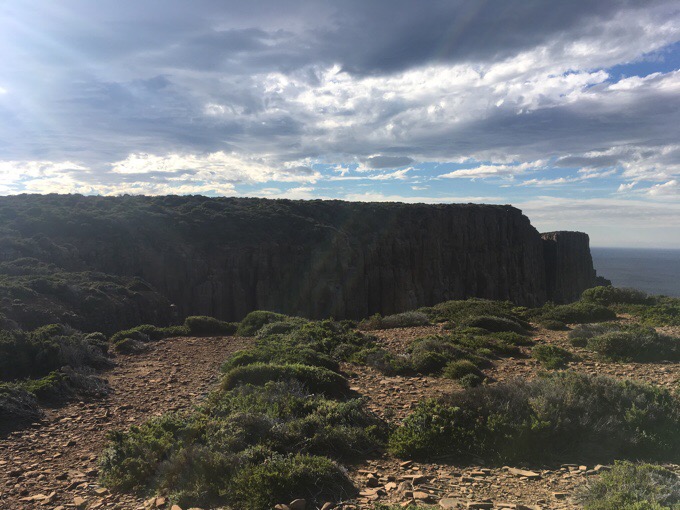 Looking ahead to Cape Raoul. 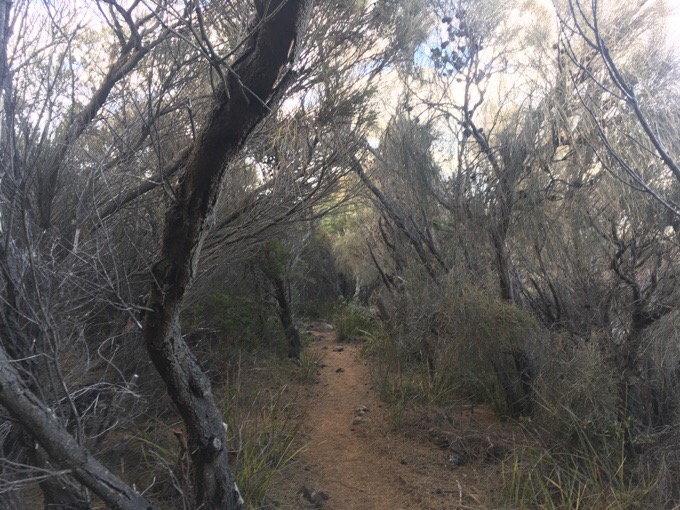 Nice and protected much of the way. This area is known for high winds.

We eventually made it to the viewpoints at the tip of Cape Raoul. The light was shining great with incoming clouds and shadows over the ocean. We could see up to where we were yesterday on Cape Pillar with Tasman Island off the coast. Great views! 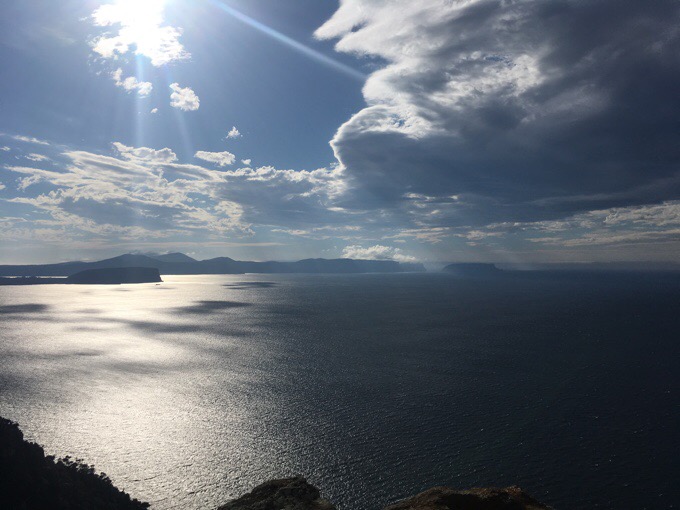 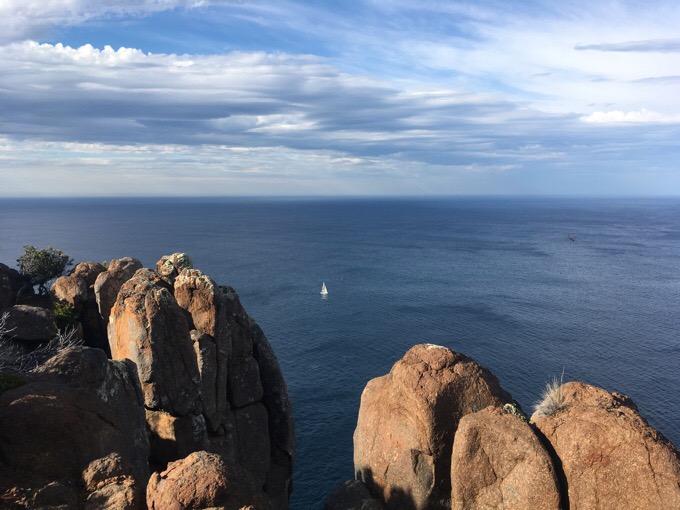 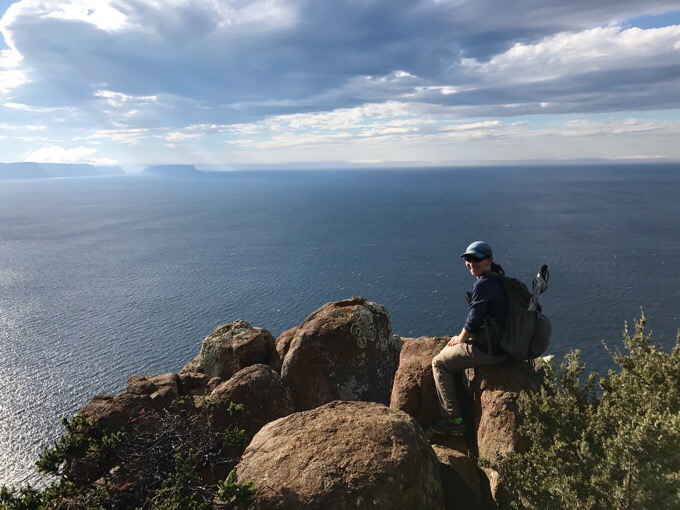 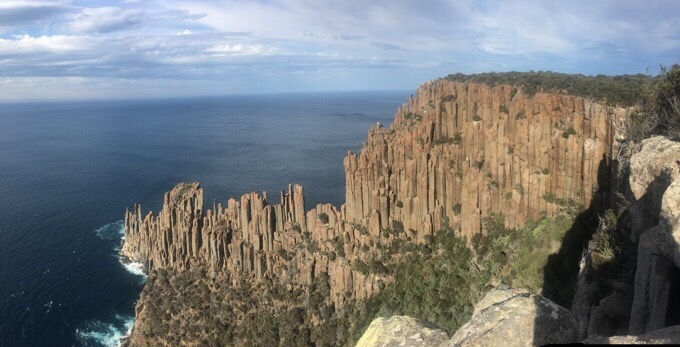 We seemed to have timed it just right as the winds picked up and clouds moved in as we hiked back to the car. Cape Raoul can be quite windy and had recorded some of the highest wind speeds in all of Australia. 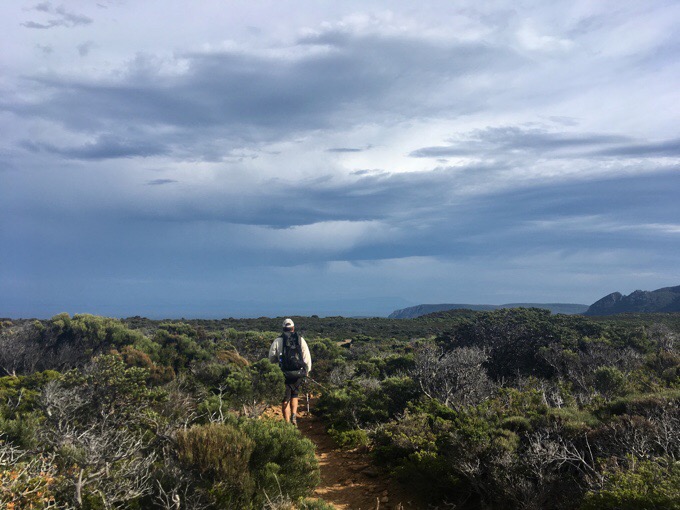 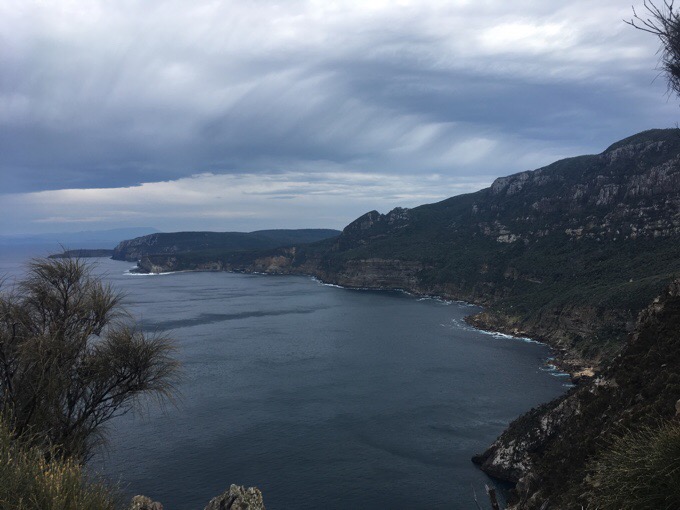 We made it back perfectly just as some sprinkles were coming down. We had a three hour drive to our next destination and grabbed burgers on the way. Again, gotta love this whole car thing. 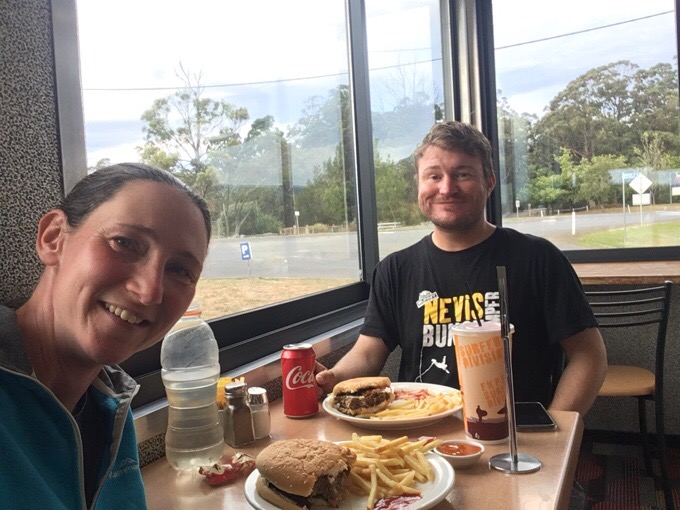 The drive was nice, and we timed it well with some hard rain coming down at times. Again, the clouds were great. 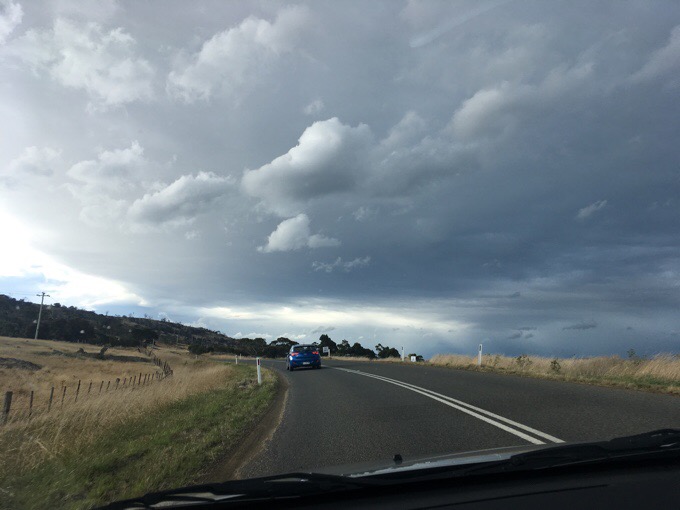 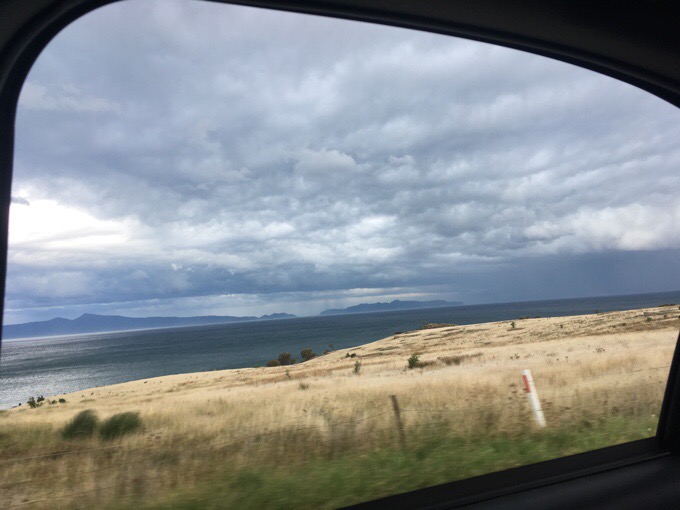 We drove to one of the most popular destinations in Tasmania, the Freycinet Peninsula. It is known for its wonderful beaches and scenery. Just as we hoped, the clouds cleared as we arrived at our campsites at Richardson Bay. It was an awesome deal of just $13AUD/$10US total for the two of us to get a campsite right on the bay. The sunset was great and pretty darn perfect conditions with no wind after a gusty day with rain. 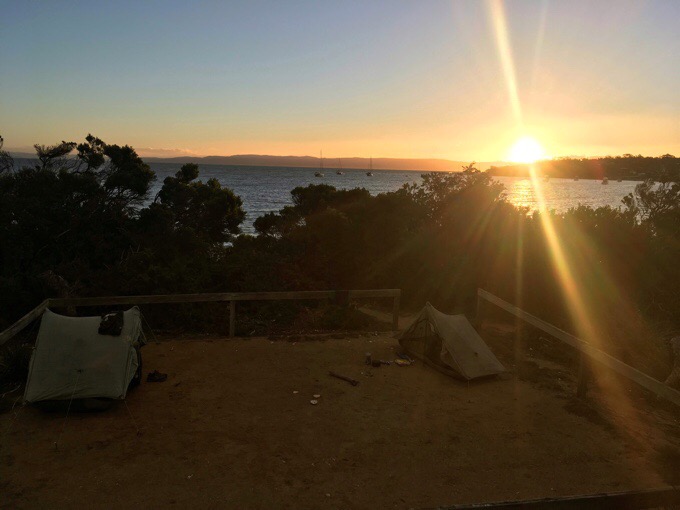 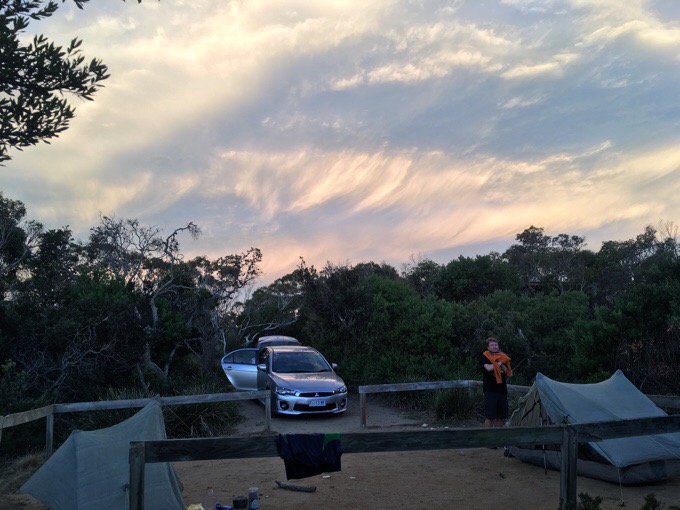 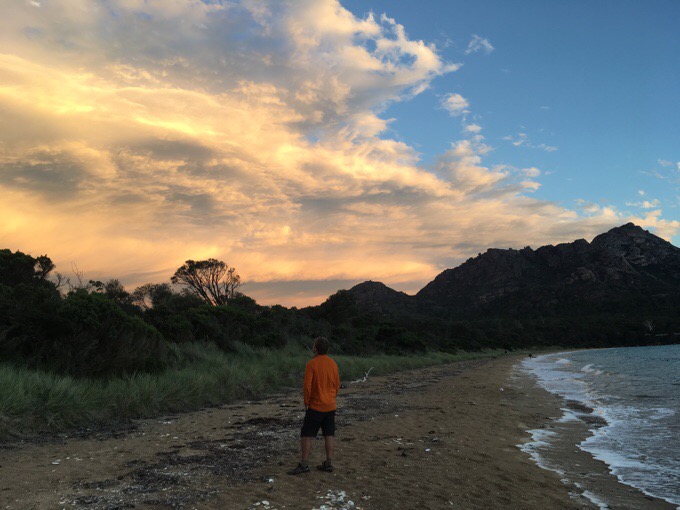 Tomorrow, we start the very popular Freycinet Circuit that goes through Freycinet National Park. For the next two days, we will hike along the beaches, and over some inland mountains with great views. Weather looks great and I’m really looking forward to this one. I swear, Tasmania needs to stop with this cause I might never leave. I know it rains here, but we have had a very fortunate few weeks, and it looks like the remaining two weeks are opening up as well for us to head inland to the mountains in a handful of days. Pretty exciting. Right now, the serene lapping of the calm waves right next to our site are drifting me off to sleep. I had to take a video to capture it. It’s just surreal to have days like this and it’s been such a great finale to this past 9 months of hiking and travel. Thank you Tasmania:)