It was a great night of sleep along Coles Bay. We had just a few minutes of driving to the trailhead for our next overnight loop, the Freycinet Circuit, a 32km/19.8mi loop on the east coast peninsula of Tasmania that is Freycinet National Park. It is known for its calmer and more tropical feel with white sand beaches and clear green waves lapping up. We took the circuit counterclockwise and started just after 8am. The first half of the day was relaxed walking on rock at first, then through arid forest to Cooks Beach. 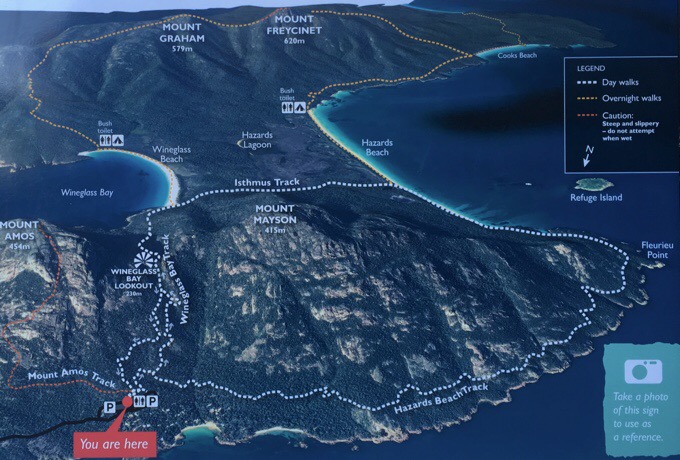 Our route is counterclockwise on the white and then yellow track. 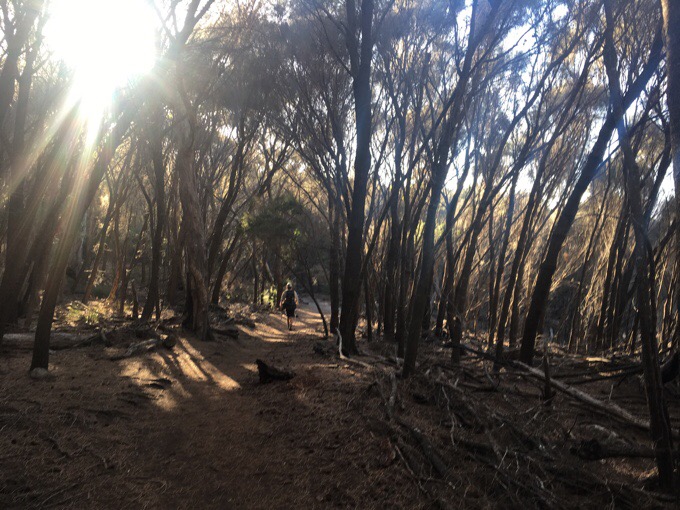 We walked along Hazards Beach for awhile. Very relaxing. 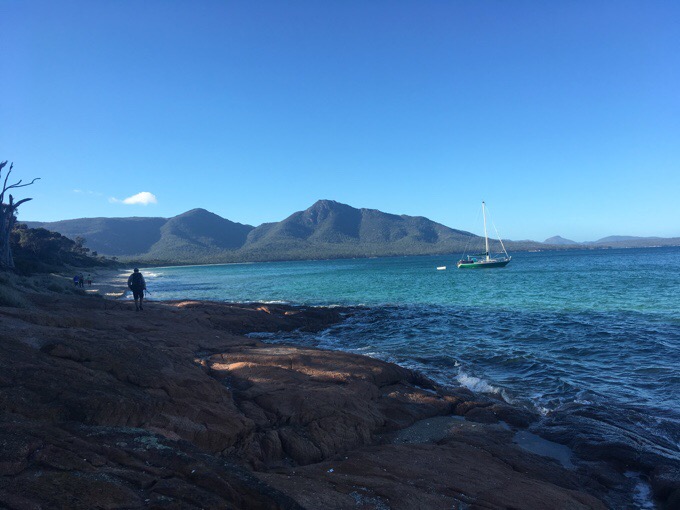 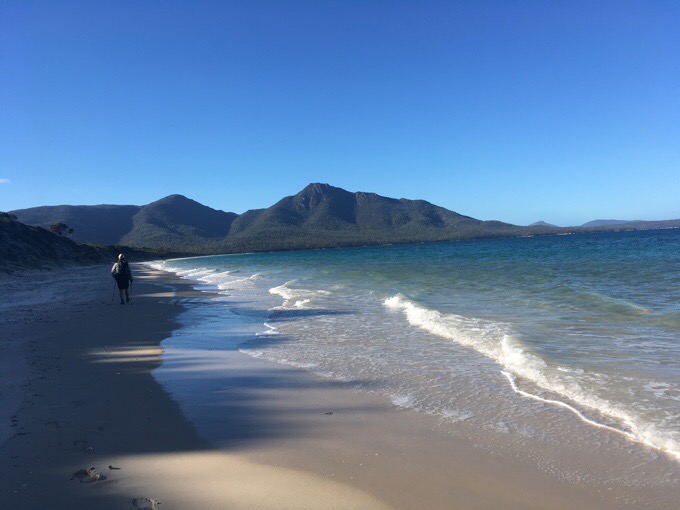 It was a short side trip to the lunch shelter at Cooks Beach, but we did it because we weren’t sure of the water sources the rest of the day, and knew we could get water at the tank there. There were two volunteers at the shelter packing up to head out that were nice retired men. They assured us that the water source at our intended campsite tonight wasn’t dry, and that was a relief. We headed over to the beach and ate lunch. About 30mins later, we watched as the two men had wheelbarrows and were walking along the beach in front of us to load up their nearby sailboat. We did a double take when we realized one of them was now completed naked except for a hat. It was so unexpected and random and not the lunchtime view we were expecting. We theorized on how common this was at this beach and if it was common in Tasmania in general that he was walking freely naked in a popular national park. 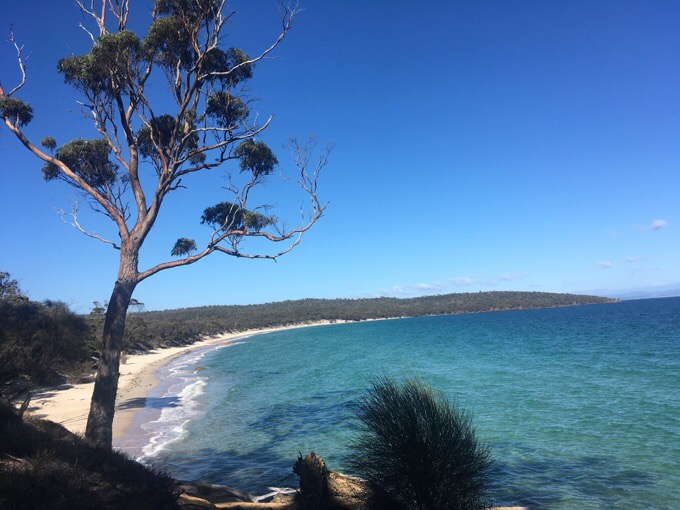 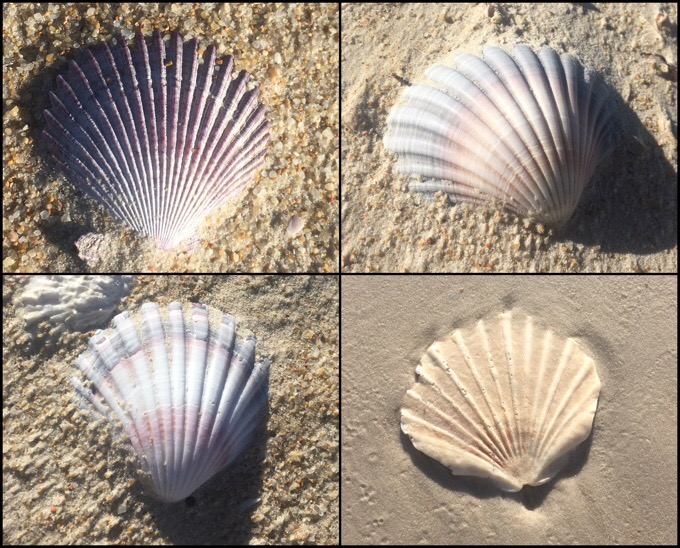 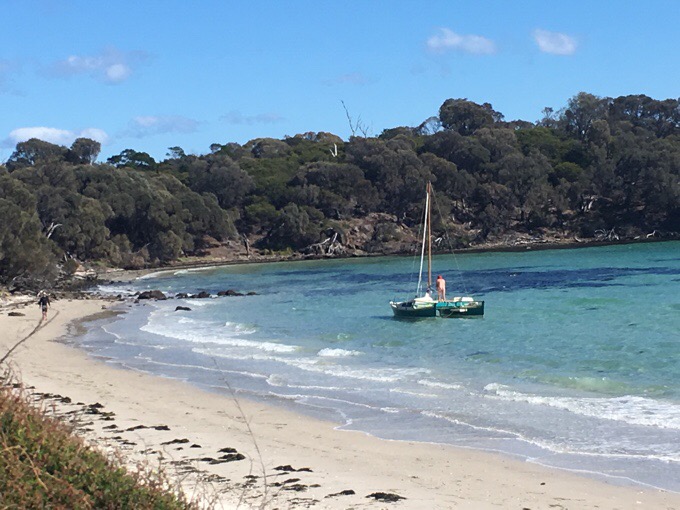 Yep, naked dude on a sailboat.

After lunch, it was back into the arid woods for most of the day, and some climbing up to the junction for the short side hike of Mount Freycinet, the highest point in the park. We hadn’t seen too many hikers today, and no one else doing the loop. Griggs was a bit ahead of me on the uphill and I looked up to see a man hiking towards me…completely naked! Seriously just an hour or so after seeing the other man. When he saw me, he quickly covered himself with his side bag. I just had to inquire about this. He said this area isn’t known for nudity in particular, and it was just a coincidence that we saw the other man as well. He said he sweats a lot and just finds it more enjoyable to hike without clothing and he didn’t expect to see anyone else. I have to say that this was a first for me. In all my years, I’ve come across many naked people in lakes or streams, but other than the yearly hike naked day each summer in June, I’ve never seen anyone just hiking naked. Of course I had to document this moment with a photo to have any respect as a true blogger. 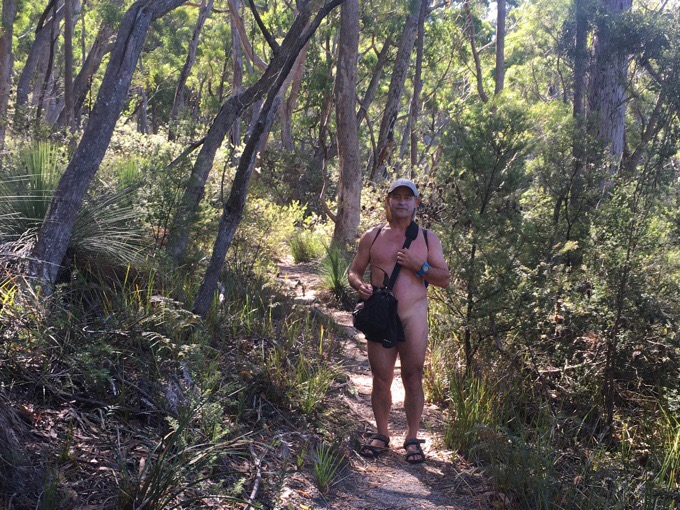 Just when you think you’ve seen it all.

We did the short side trip up Mt Freycinet. It had good views of the whole peninsula, and we were able to look down on where we were headed, the very popular Wineglass Bay. 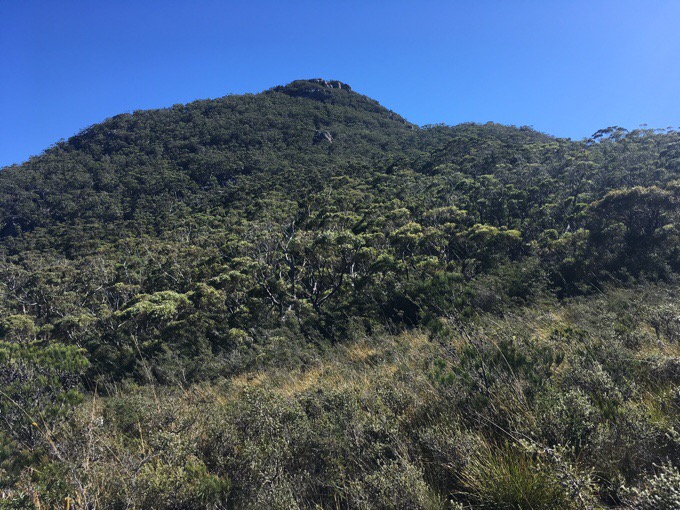 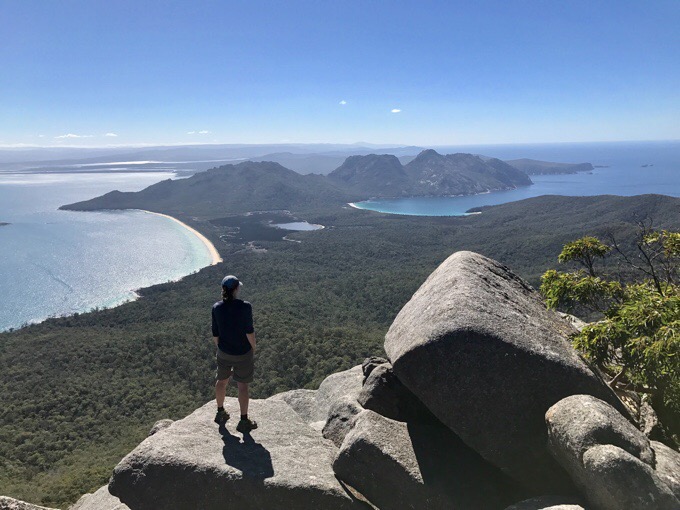 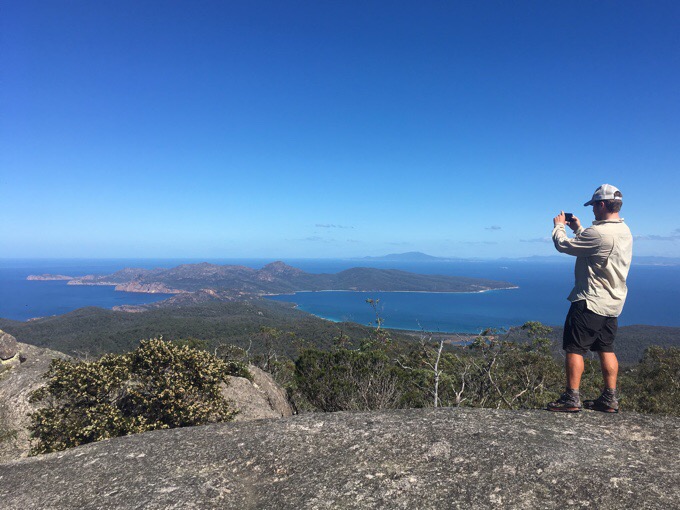 The view of the other side of the peninsula. 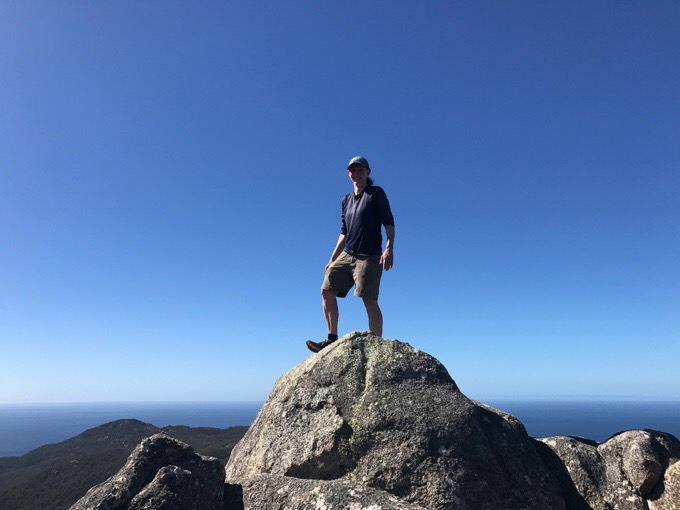 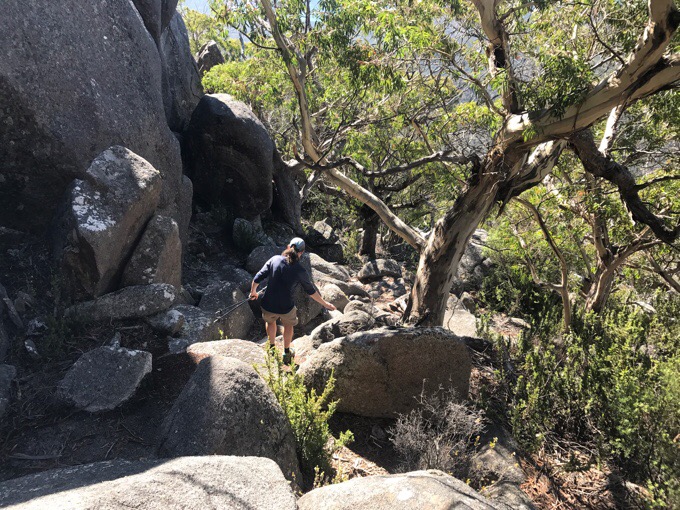 Back on the track, we also went over Mt Graham, which also had a view looking towards Wineglass Bay, but the side trip to Mt Freycinet was worth it for the full view much higher. 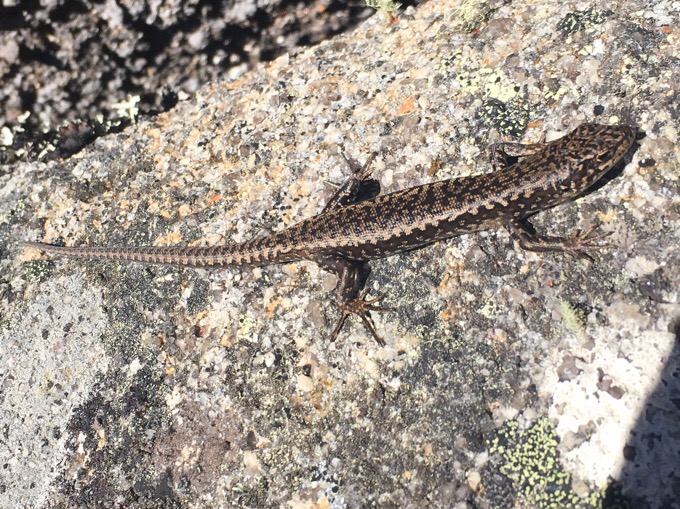 We see these all over in all sizes in all of Tassie. 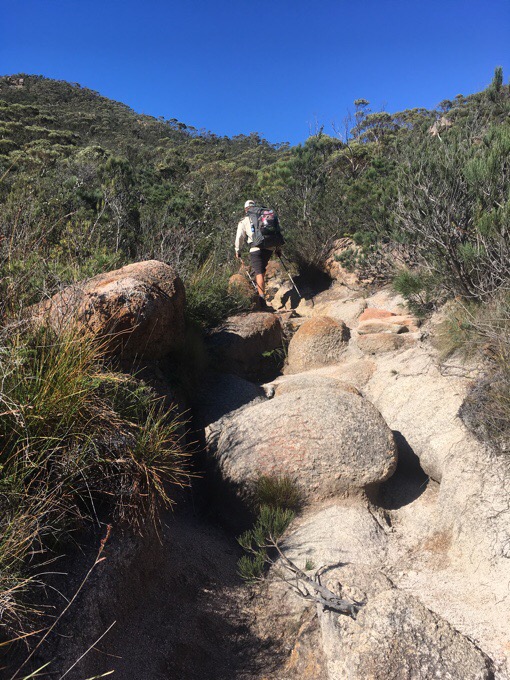 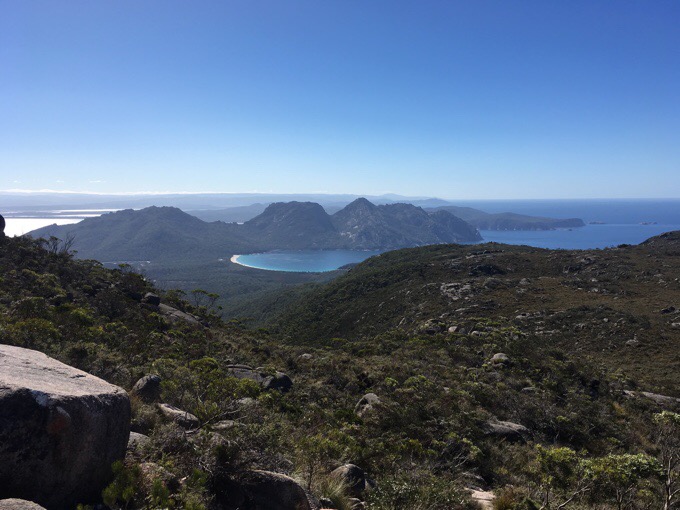 We made it to camp plenty early just before 5pm. We were only 3mi/5km from the car at the end of the loop, so we could have done the loop in a day as a day walk, but we heard Wineglass Bay was a great spot to camp. We had it to ourselves with a couple camped down the beach. We chose the camping area just over the dune that was more wooded and sheltered. 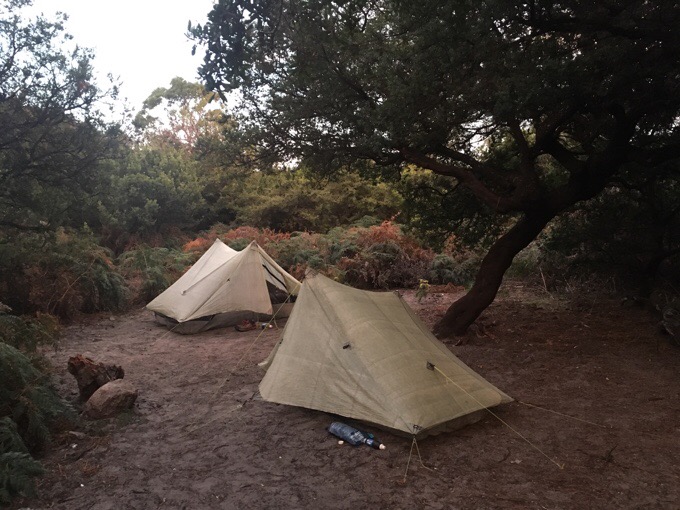 Neither of us are much for beach lounging, but we gave it a try since we were there so early and it was such a nice place. We walked barefoot on the beach and in the water some. The water was so clear and not too cold. It had a very tropical feel with the clear green ocean water, and the mountains across the bay had a tropical jungle look that was difficult to capture in a photo. Griggs actually took a nap for a bit! 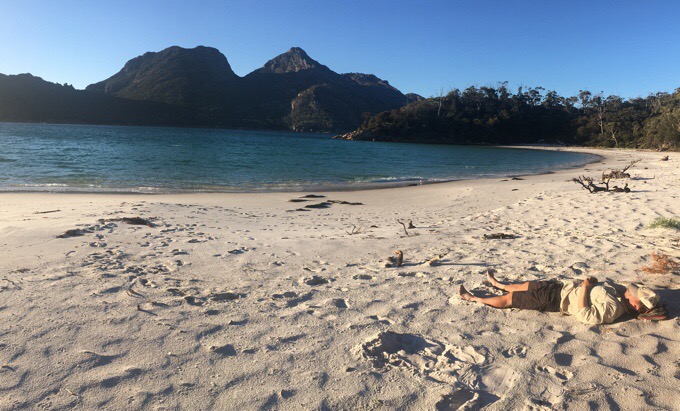 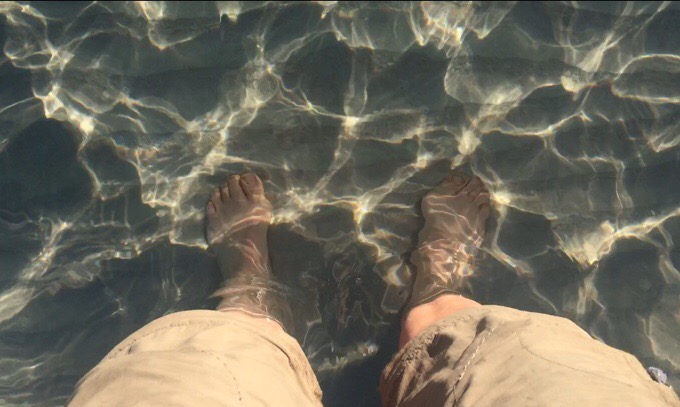 
We did our best to be beach people and ate dinner on the dune where we could watch the sunset. When I went to the campsite to get my food bag for dinner, I found a guilty looking wallaby trying to go through Griggs’s food bag he had left out. Luckily, I got there before he bounced off with it. He was very habituated to people and didn’t bounce off when I approached. I think he was waiting for me to feed him. He was quite cute. 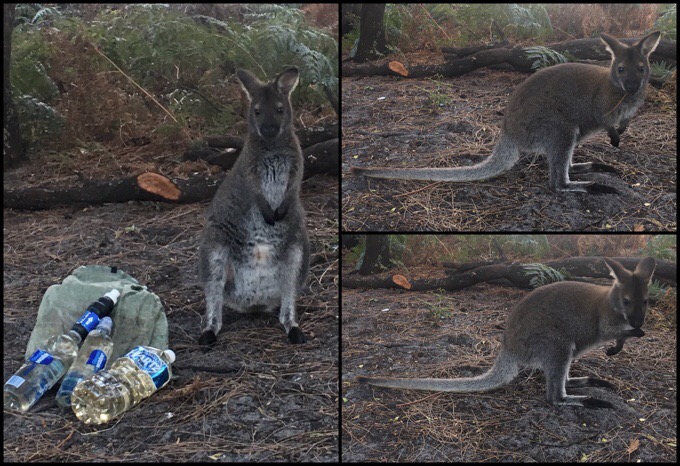 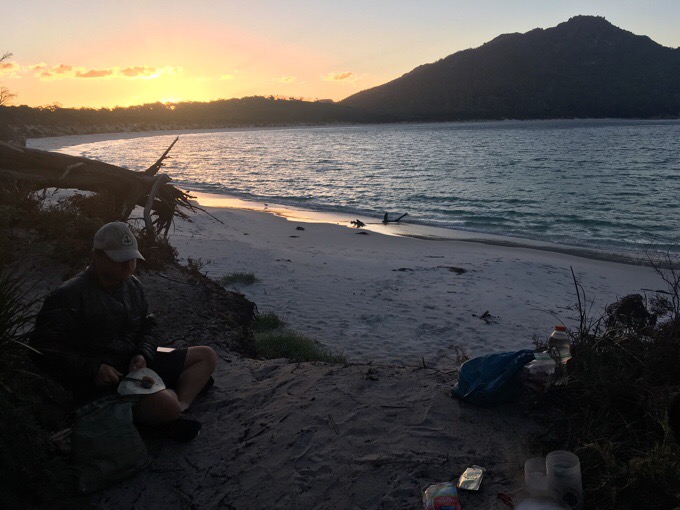 I was excited to be done early and watch a show, but I fell asleep early around 8:30pm before even finishing my writing. It must be the ocean air and the sound of the waves, but I didn’t fight it. Now it’s 1:30am, and I’m wide awake as I thought might happen, so I finished up my writing and am watching some of Downton Abbey before going back to sleep. This was a very relaxing loop to do. We have a short 5km/3mi out in the morning tomorrow, and then we will head to our final coastal destination for an overnight on Maria Island.