It was a relaxed 5km/3mi walk out from Wineglass Bay. We’ve heard it can be a busy day hike, but our timing was good leaving in the morning before many venture out. If anyone goes in from the side of the day hike, I recommend walking the full beach to really see the view on the far side where we camped and to also see the greener clear ocean water. The lighting and view just wasn’t the same on the other end where many day hikers seem to stop and turn around. 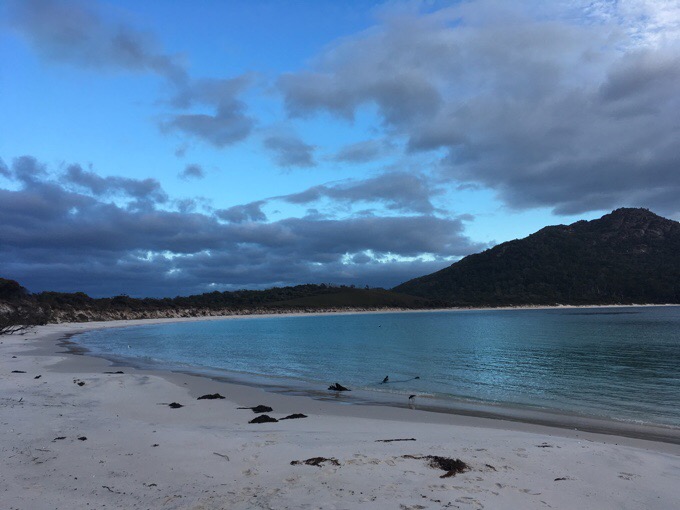 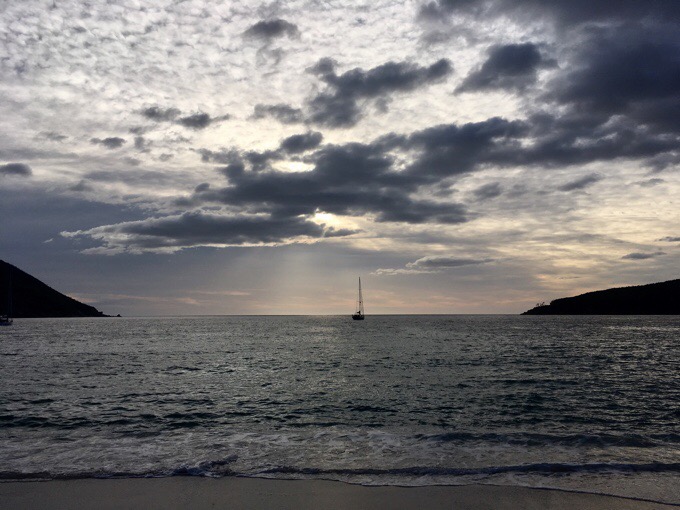 One of my favorite photos from Tassie. 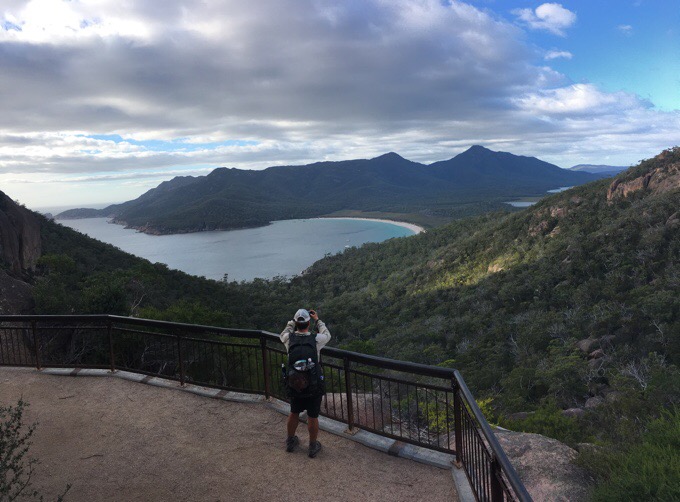 Overlooking where we camped at Wineglass Bay with Mt Graham and Freycinet.

Once we got to the car, our next stop was to drive 1.5hrs to Triabunna where there’s a ferry to Maria (pronounced Mariah) Island. This will be our final coastal venture. Maria Island is a tourist destination, and no cars are brought over on the ferry. There’s a campsite people can basecamp out of, and then have the option of a handful of hikes that are fairly short. The afternoon ferry didn’t leave until 3:30pm, so we thought we were going to have a few hours of time to waste. We stopped into an information center and found out that there was a bonus ferry running earlier in the afternoon that was perfect for our timing, so we signed up for that and had just enough time for burgers and fries at a takeaway before we boarded. We continue to be amazed by our fortunate timing and how seamlessly things are flowing from one to the next. 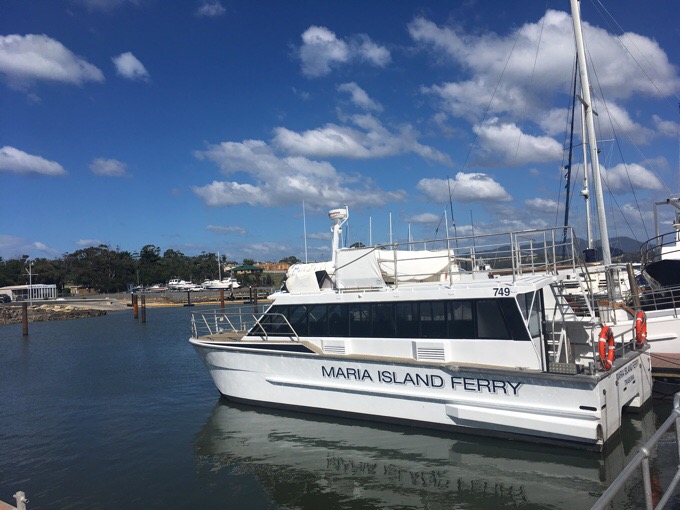 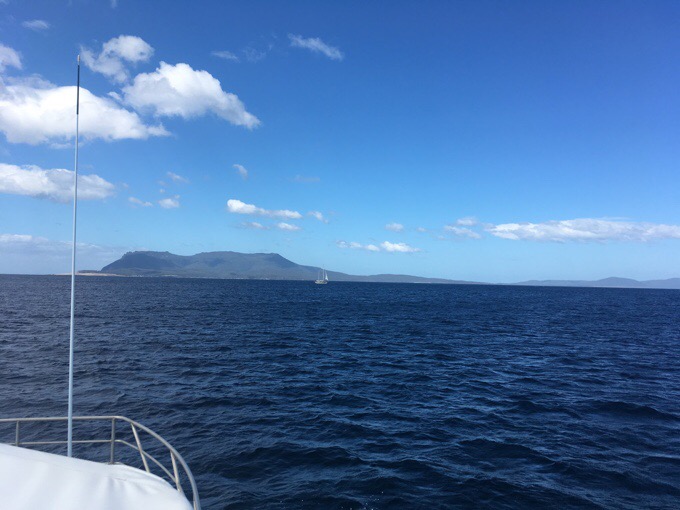 We knew that rain was going to set in tonight for a handful of hours, and then clear up for a great day tomorrow. This earlier ferry gave us the opportunity to hit one of the day hikes on Maria Island that is short, but is best at low tide, the Painted Cliffs. The tide was perfect to go before dinner, and just before the rain was due. Again, a timing thing we hadn’t considered that fell right into place. It was a short 4km/2.5mi hike, and clouds had moved in to make for some great scenery. Maria Island also has some historic sites as it was home to one of Australia’s oldest penitentiaries. 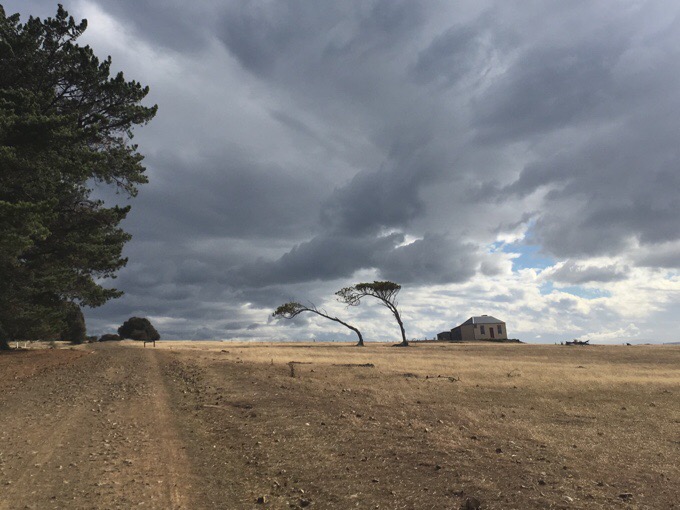 We had seen photos of the Painted Cliffs, so I was worried I wouldn’t be surprised, but we both were quite entertained by them. We got the short stretch of unique rock along the coast all to ourselves, and it was pretty awe inspiring. I know many would like the sunset light on the rocks, but I was excited to have the dark skies and clouds to add to it. We too sooo many photos that it was tough not to choose took many to post. Here are some of my favorites. 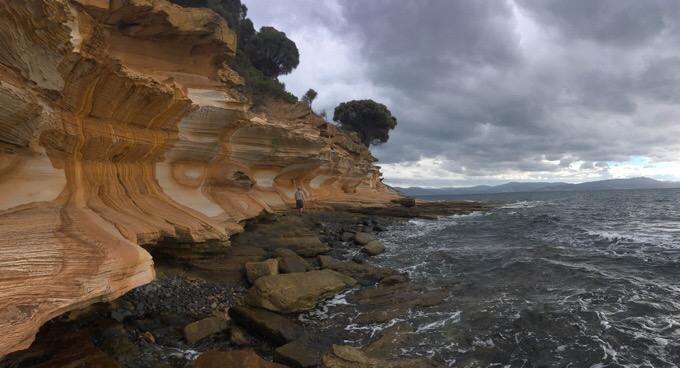 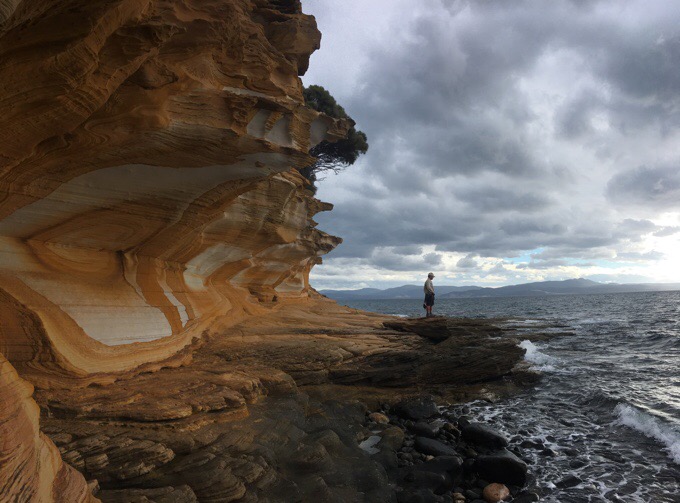 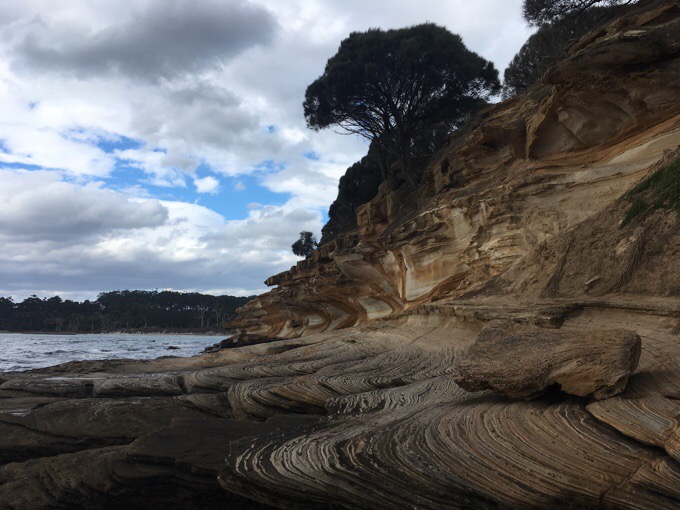 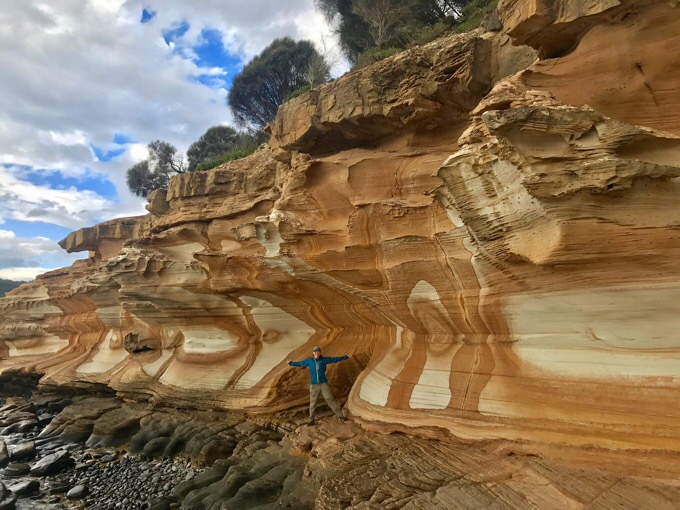 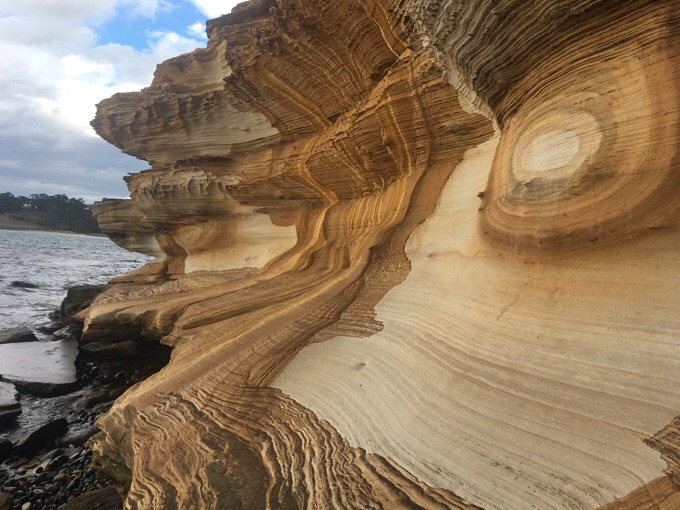 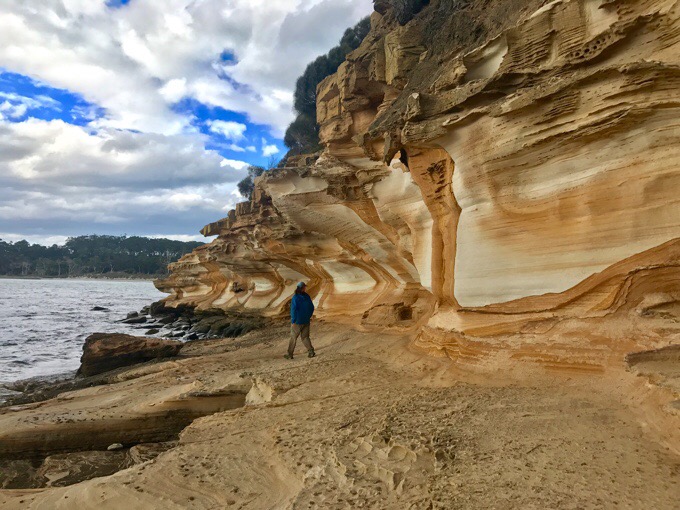 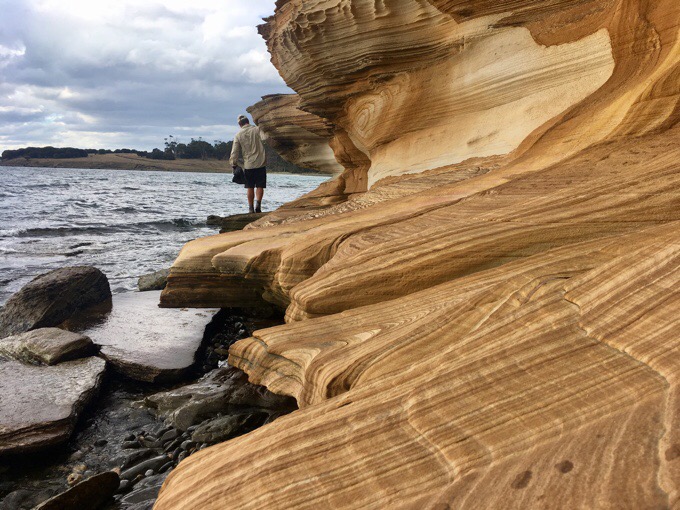 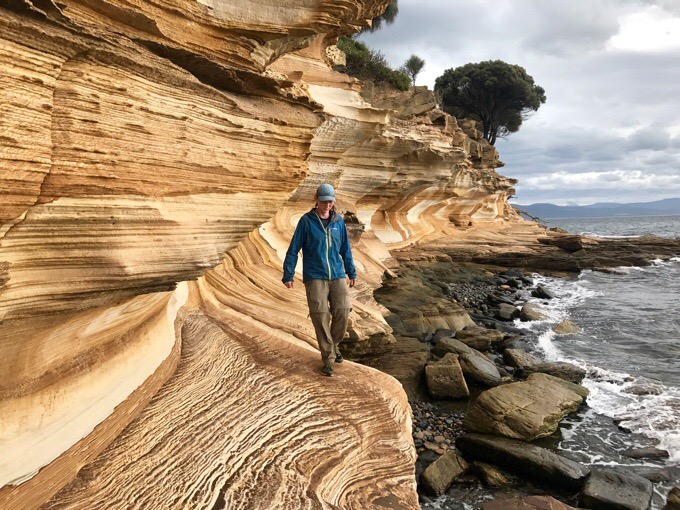 On the walk back, we saw our third wombat of the trip. It was sooo cute! 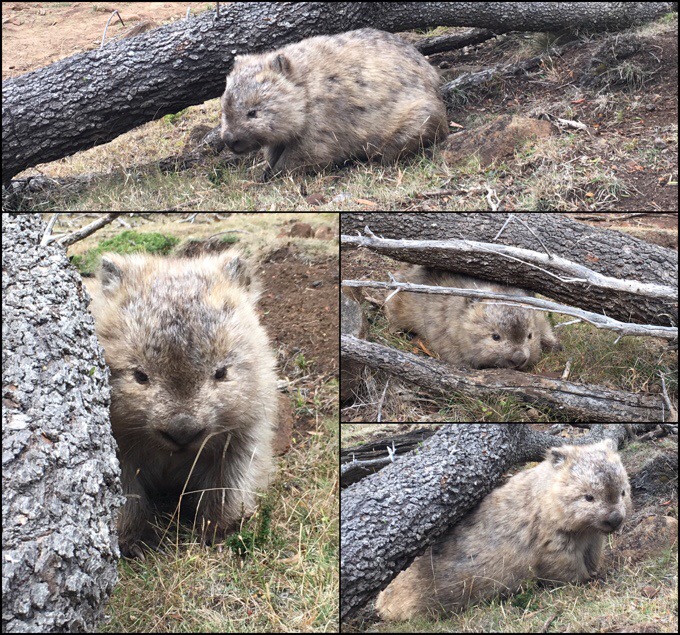 We made it back with plenty of time to eat dinner and get settled in our tents before the rain started around 7:15pm. It hasn’t been as heavy as we anticipated, but once again, it isn’t even 8pm, and the pitter patter is lulling me to sleep. The only thing keeping me awake is a nearby school group with about 50 kids around 11yrs old that have yet to quiet down. I was up for almost 2hrs in the middle of the night last night when I fell asleep too early, so I’m going to try to stay up and watch an episode of Downton Abbey. I’ve made it to the third season. The end of the finale of season two was enchantingly perfect. Still can’t believe I didn’t jump on the DA bandwagon sooner! Not much that can beat a day like today and ending it nuzzled in a down sleeping bag watching a show as rain falls on the tent. 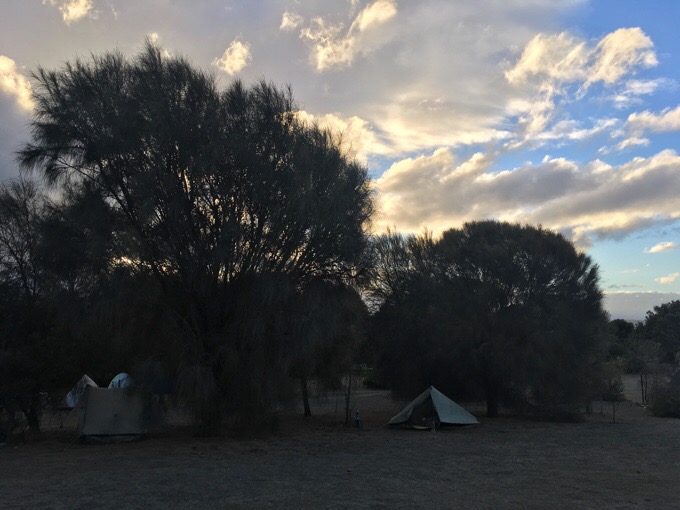