Day 7: Getting Back On Track


It was a brisk damp morning with dew blanketing the valley, but it was dry and cozy in our little rustic cabin. Skies cleared completely overnight and there wasn’t a cloud in the sky. We set off about 7:20am to do the side trips in Walls Of Jerusalem. Since we’d be returning by the hut later, we were able to leave most our things there and just headed out with what we’d need for the morning. I’ve loved this aspect of the trip so far that we can do many out and back side trips that don’t require carrying our full pack. It’s been pretty indulgent after so many months of carrying that full pack everywhere. 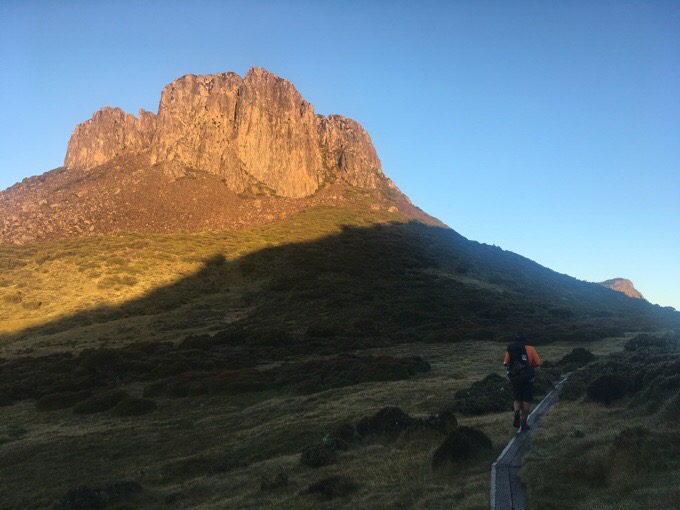 There are a handful of options all off one main trail. The first ones we headed to were called Solomons Throne and King Davids Peak. They are high points that go up on the cliffs we walked by yesterday and look down over the valley. 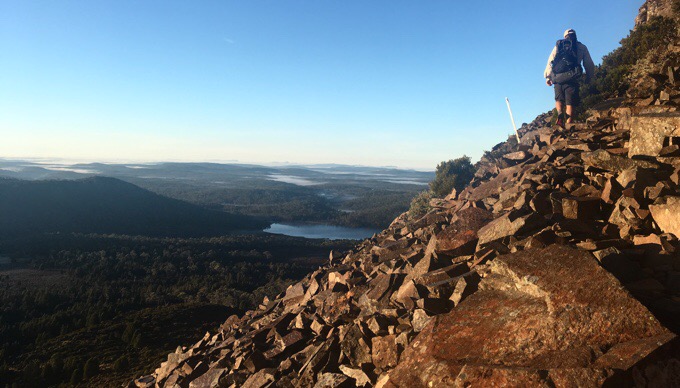 We don’t have specific stats on the side hikes, but they are short easy hikes. It was 30mins up to a nice view at Solomons Throne. 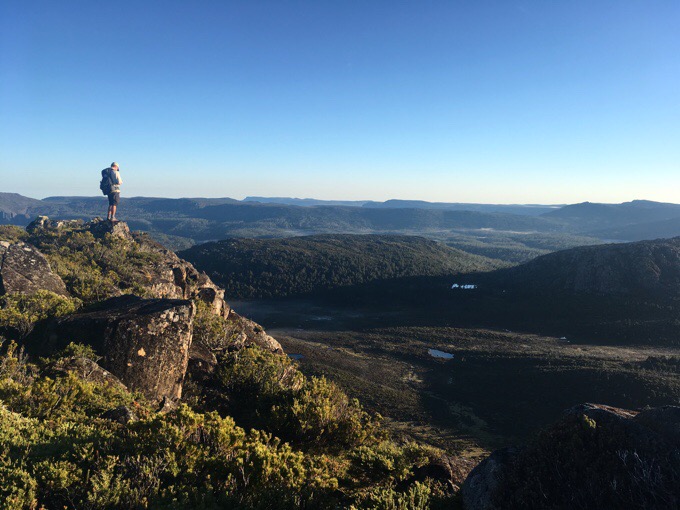 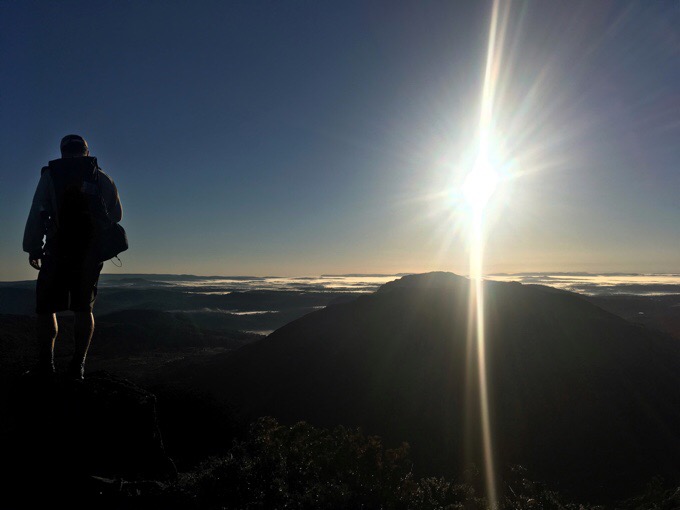 From up there, we had the option to continue to King Davids Peak, and chose to pass since it seemed to offer the same view and we were satisfied with what we saw. We looked across the way at another option, The Temple, and chose to also not do that one since it too would have been the same views. 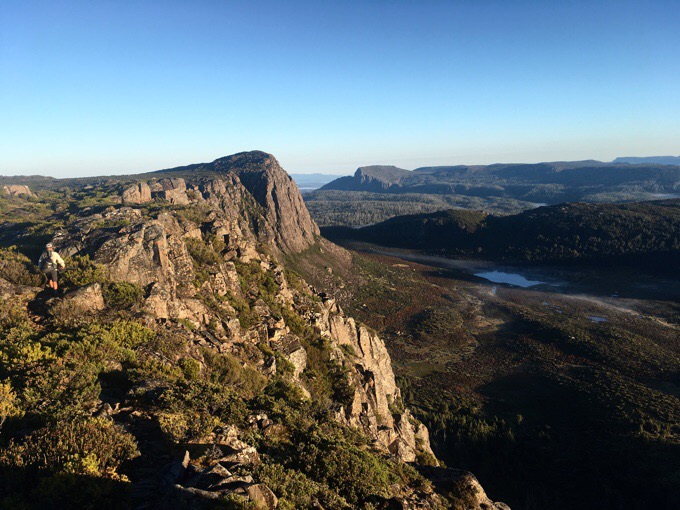 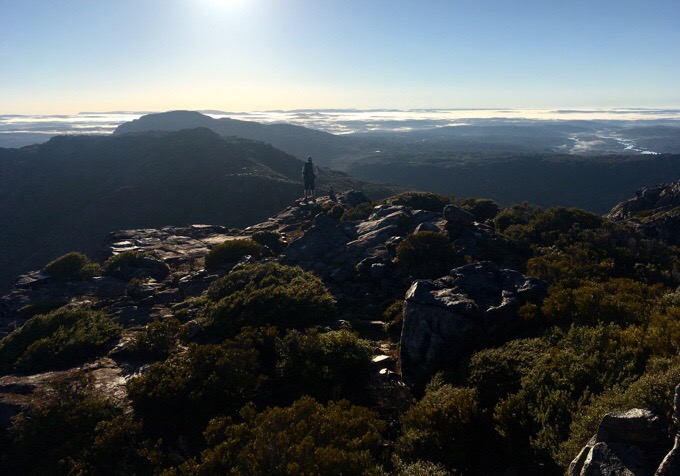 Looking at The Temple and then Mt Jerusalem in the distance.

I’m just not a peak bagger for the sake of peak bagging. The views seemed the same for all in the area that we were already getting on Solomons Throne. Nice views, but the same, so we hiked back toward the hut to do Mt Jerusalem. 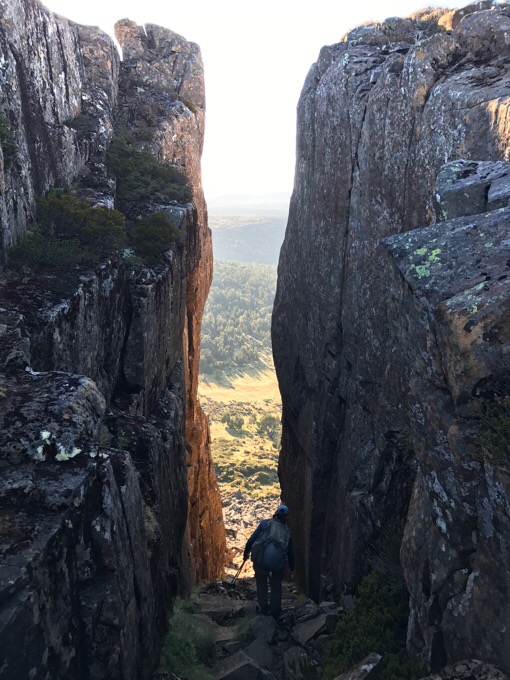 Hiking down from Solomons Throne.

The hike up to Mt Jerusalem was also nice and simple and took about 45mins. The view was great looking back towards the valley we’d been in. We could also see the prominent features we’d been on on the Overland Track. Cradle Mountain and Barn Bluff were silhouetted on the horizon. 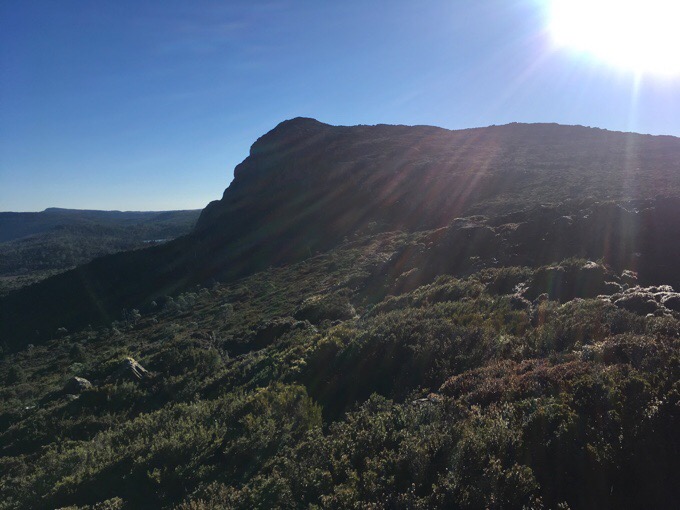 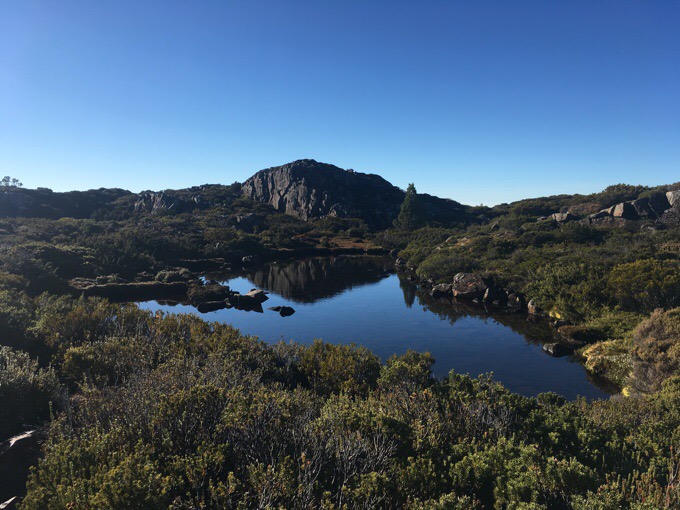 A tarn with a nice reflection. 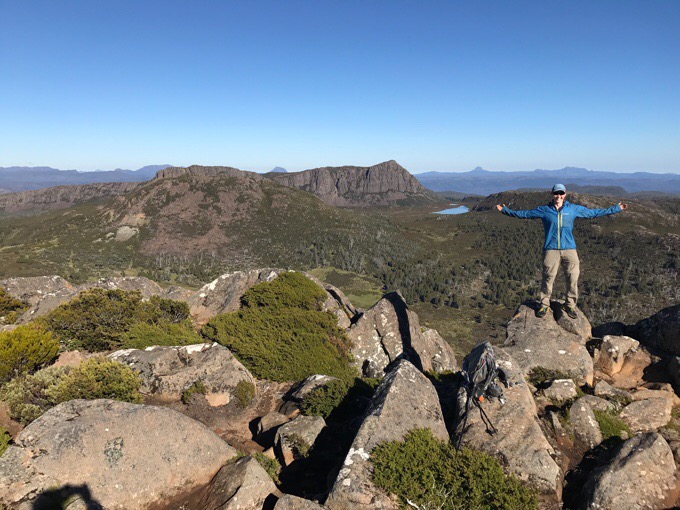 L to R: The Temple, Solomons Throne, King Davids Peak, Lake Salome. Silhouetted far is Barn Bluff (we camped next to) and Cradle Mtn (we climbed).

Looking the other direction was more of Walls Of Jerusalem Nat’l Park, with its many tarns and lakes. We spent a lot of time up top trying to do some internet stuff with the low signal we were able to get. It took awhile, but Griggs was able to update slideshows to Instagram. It seems I will need to wait for town to load the blogs, as it was just too slow and was draining my phone battery quickly. 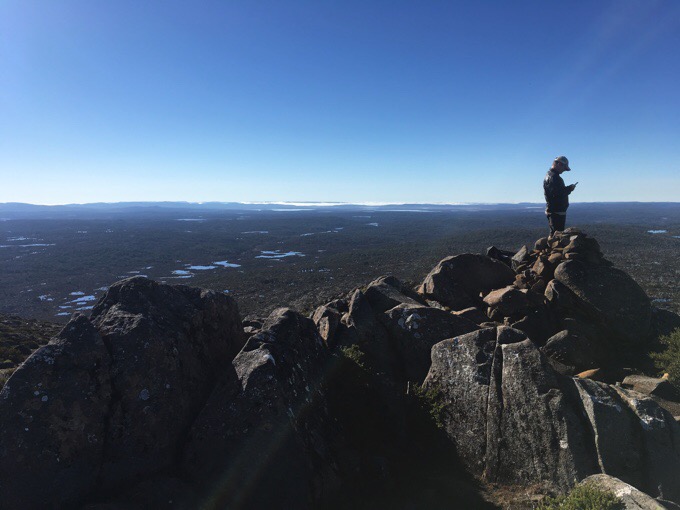 We returned to the Dixons Kingdom Hut and packed up to hike back to the Overland Track, having completed the main sites we wanted to see on this first trip through Walls Of Jerusalem. We know there is much more to explore in there, but it was nice to hit some of the highlights the best we could as a side trip off the Overland. We headed out towards Lake Ball down Jafa Valley to then connect back to Lake Adelaide and Lake Meston the same way we had hiked in from the OLT a couple days ago. 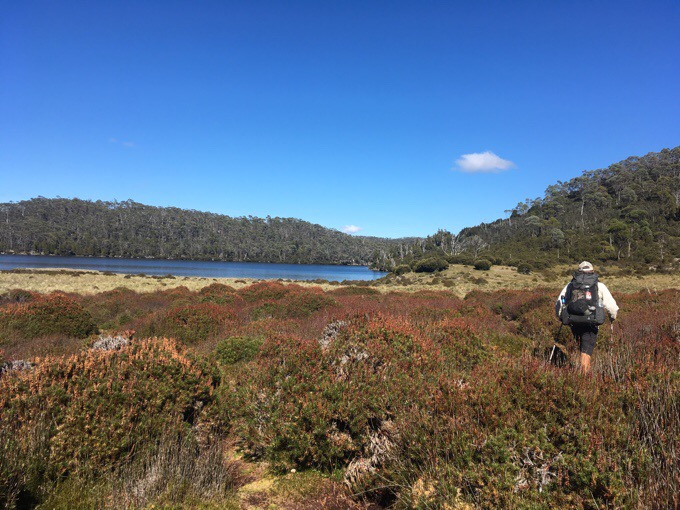 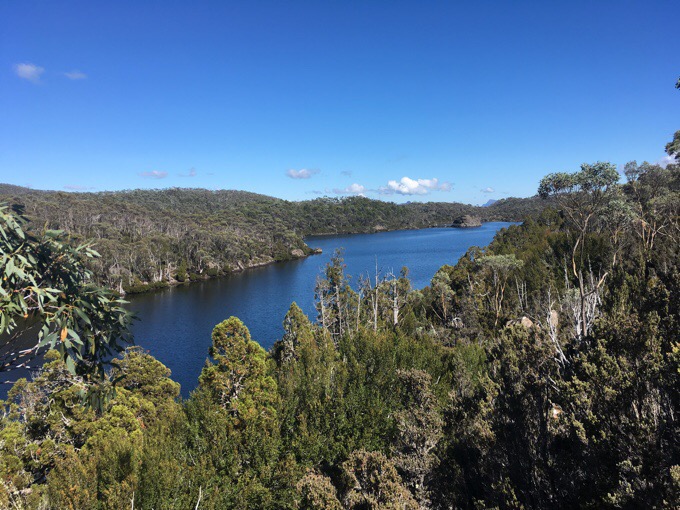 I don’t think either of us were looking forward to repeating this full day brushy, rocky, rooty connector stretch, but it was a means to an end with the main road to Walls of Jerusalem washed out. This was our most efficient option for seeing one of the top locations on many people’s Tasmania list. 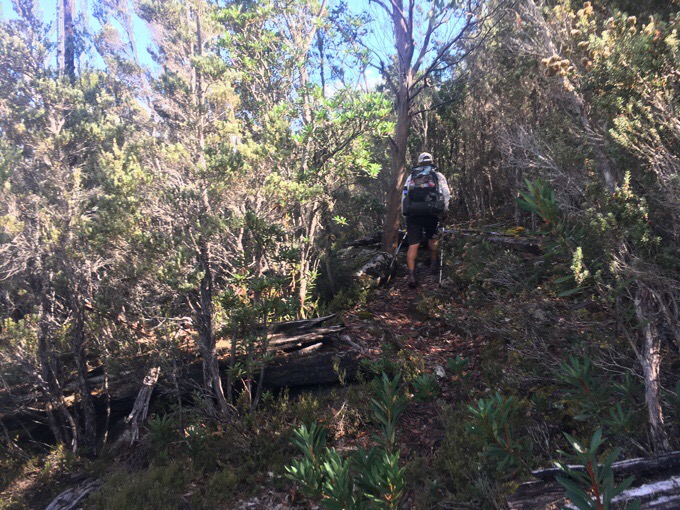 The brush was still wet from the day of rain, so we got pretty wet. It was warm outside, so it kept me cooled off a bit. There were tons of spider webs, so I would say this isn’t the most enjoyable way to spend a day. We both just put our heads down and barreled through. Somehow, it was easier this time around and seemed to go faster. It’s estimated to take about 9hrs to do, and the first time we were about 20% faster than the book time. This time, we were even more efficient and kept the trail in the confusing parts so much better. We were a good hour faster than our first time through, so that was motivating. 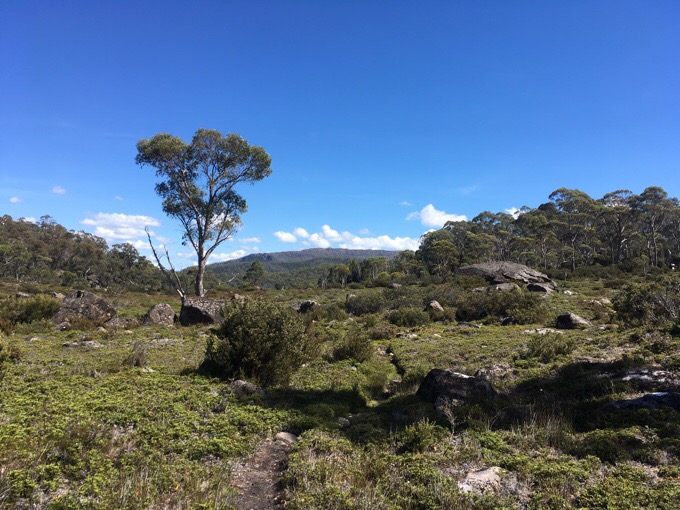 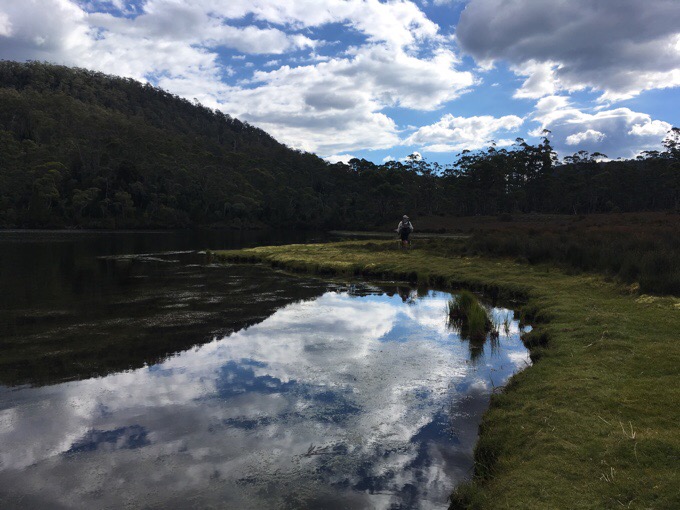 We connected back to Junction Lake and followed the Mersey River back towards Harnett Falls. Griggs was a great trail hound and we kept a great rhythm making it all the way through that section today, which we didn’t expect. 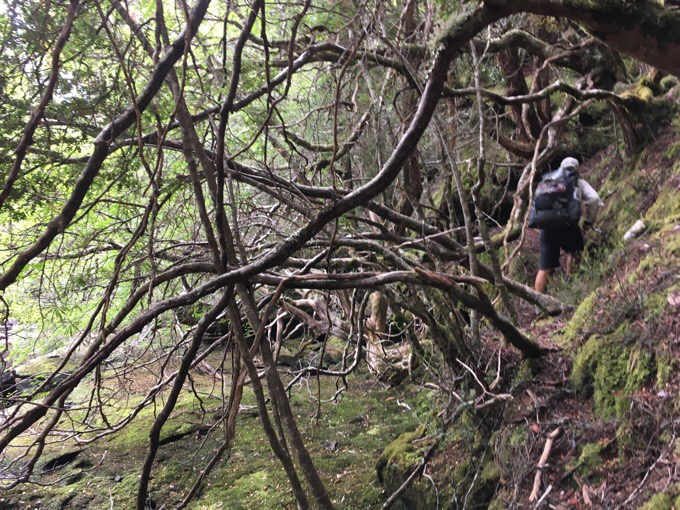 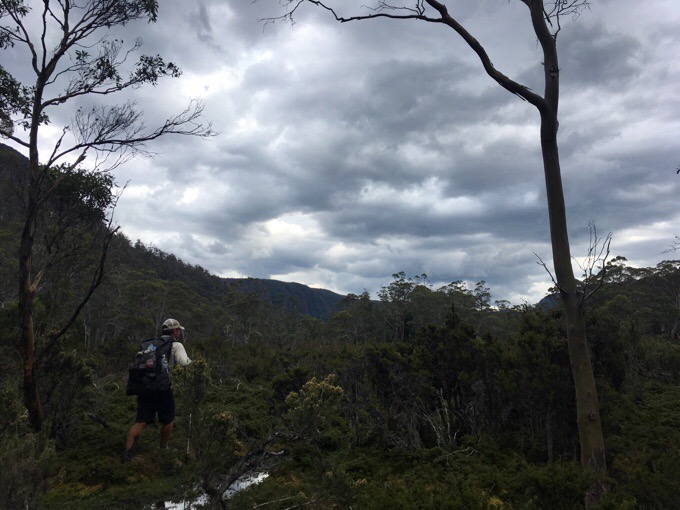 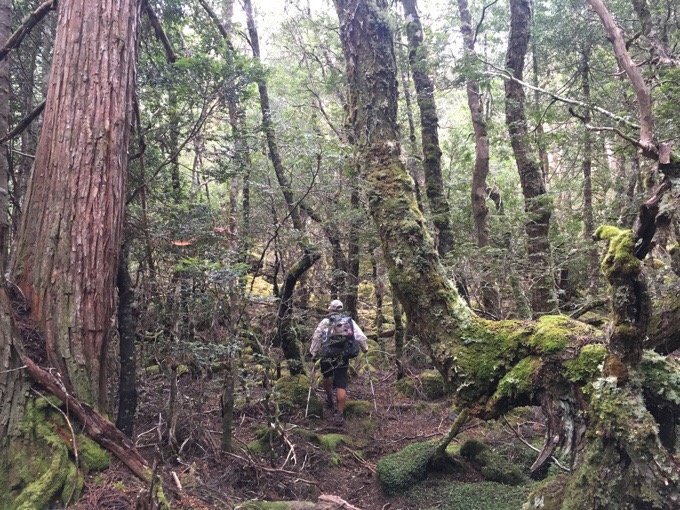 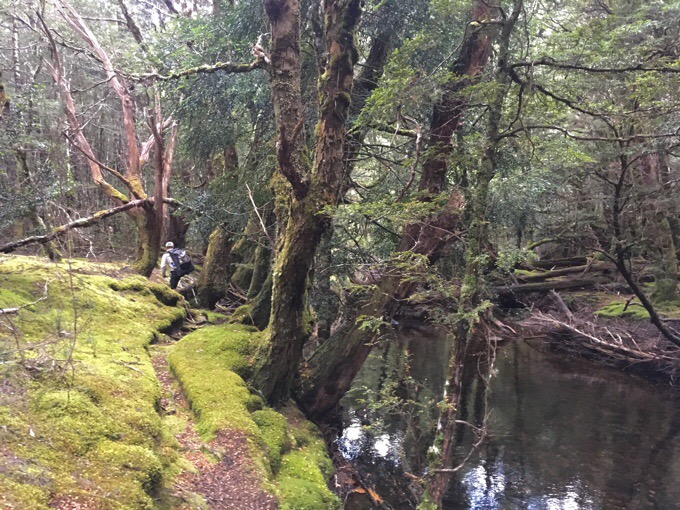 Towards the end, we did go into the Mersey River a bit to cross it, and also to walk in it rather than the brush along its shore. About 20mins after wading in it, I felt a twinge near my ankle, and lifted my pant leg hoping it wasn’t what I thought it was. Yep, a leech! Damn! I pulled my pant legs up even more to find four had attached to one leg and two were on my other. I had six going to town feasting on my blood at once and a couple others that had yet to attach. Ewww! 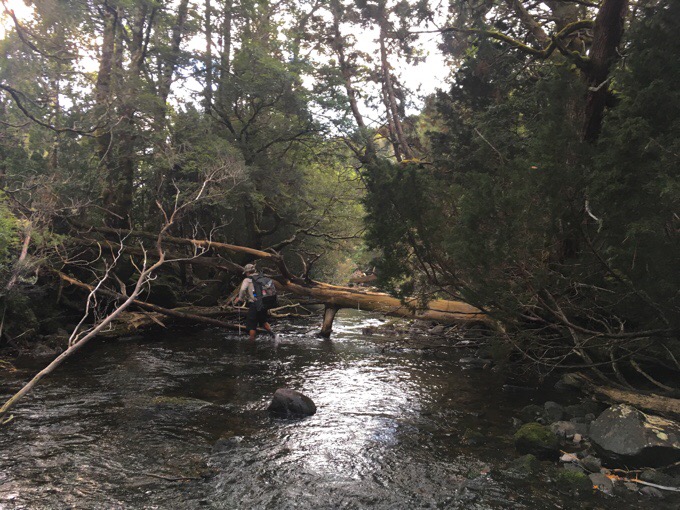 Walking in the Mersey River.

Some were quite engorged and had obviously been there awhile. We couldn’t believe I had so many and Griggs had none. He had shorts on too. My guess is that it happened wading in the river and maybe my pants managed to catch them inside. Chills! I just flicked them off quickly and didn’t feel anything. We’d been warned, the open wound would take a bit to clot because they use an anticoagulant to suck the blood. Since we were hiking, I just flicked them all off quickly, and we carried on. A bit later, I looked at my leg to notice the ones on my calf had taken awhile to clot and bled through my pants. Beautiful…ugh. I also found another one I’d apparently missed that was really full and right next to my sock. So that gives me 7 that were going at once. I told Griggs to try to beat that and he said that’s one title he’d be happy to let me have, ha. 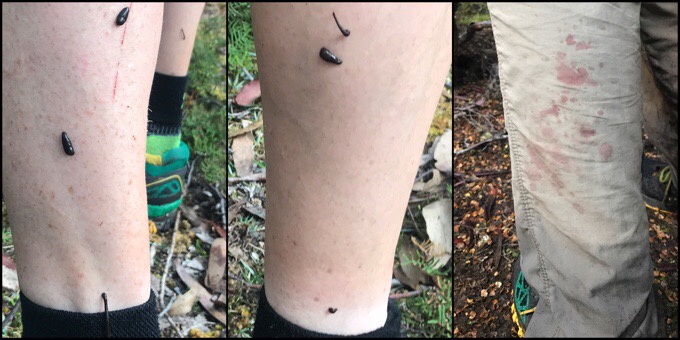 We got back to the junction to Hartnett Falls, the official end to the off trail stuff, and thought we recalled seeing space for camping, but there wasn’t any. We did the short side hike down into the canyon where the falls was. We were able to find spots further in the woods away from the falls. Thankfully, the canyon wasn’t full of mist, as the guidebook says can happen when the waterfall is at a higher water level. Hartnett Falls was pretty cool to see, and is a popular side trip off the Overland Track. It’s normally cascading all the way across the rocks, but with little rain, it is just to the right side now. 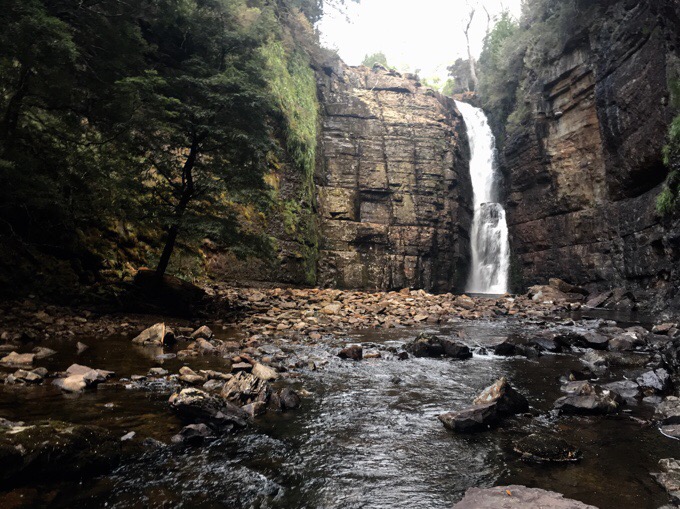 Whew, quite the day! We made it much further than we expected ending at 7pm. It was a longer day than we planned to do, but we were happy to get the off trail stuff completely done today. With what we did, it basically erased all the time we took off yesterday waiting for the rain and fog to clear. It looks that we only have two more days to go on the Overland, and we will make it out just before the next bout of rain is expected. I’ll take that! 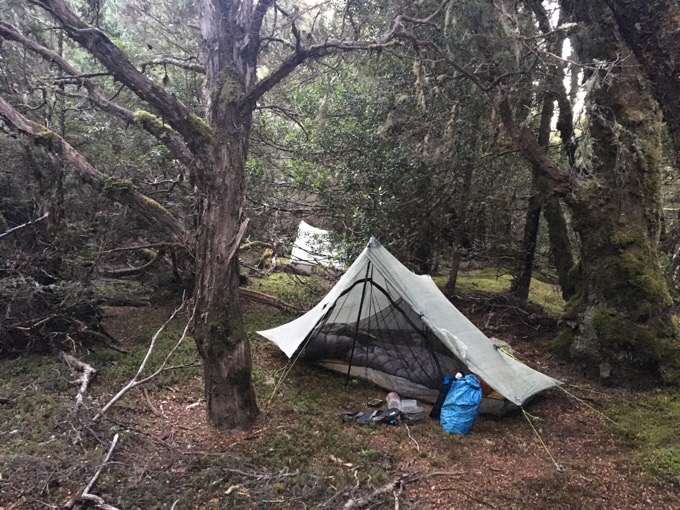