Day 29: The Half Less Traveled

It was another cold damp night camping camping next to a lake. We packed up our condensation soaked tents and headed out just after 7am. The morning was just warm enough (40F/4.4C) to not have that cold bite to it the last couple have. We had a short steep climb up to a ridge, and got enough phone service to post our journals, so we stopped with our nice view and got them uploaded. This happened yesterday, and we accepted the 30min delay once again not knowing if we’d have service again today. Turns out we would have it for half the day. I’m relieved to be hiking with someone else who understands the woes of posting a daily journal, and enjoys taking the time to upload it while on trail so there isn’t a backlog after a multi-day trip. 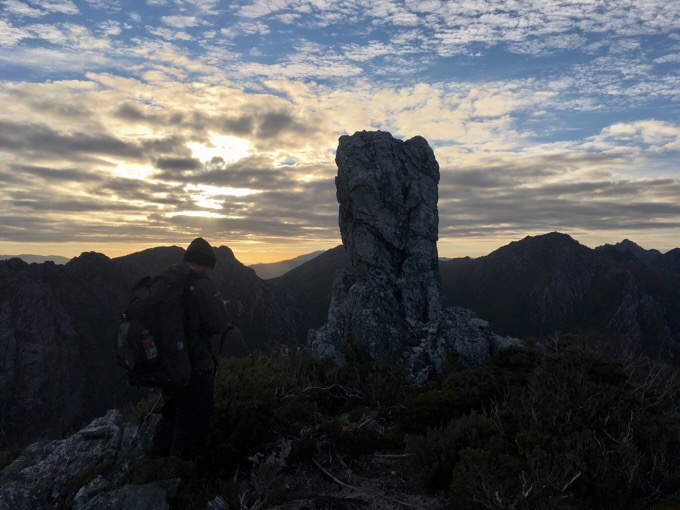 We then continued on and came to quite a view of Lake Sirona looking almost like one of infinity pools. The down climb was slow going with our bodies stiff from yesterday and still warming up. I never did take that ibuprofen, and stubbornly dealt with the sore knees this morning as well. 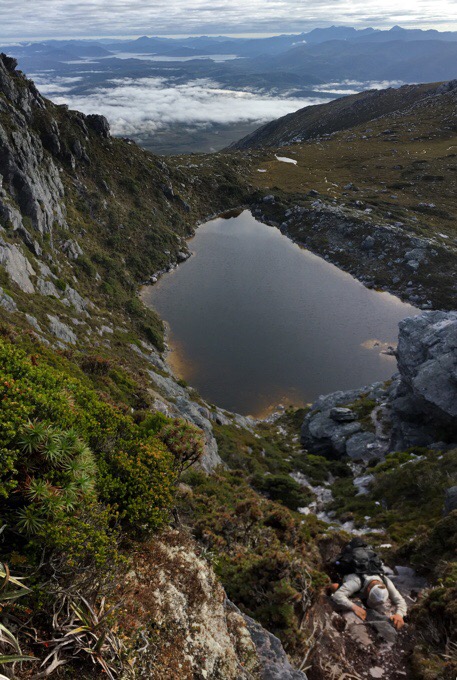 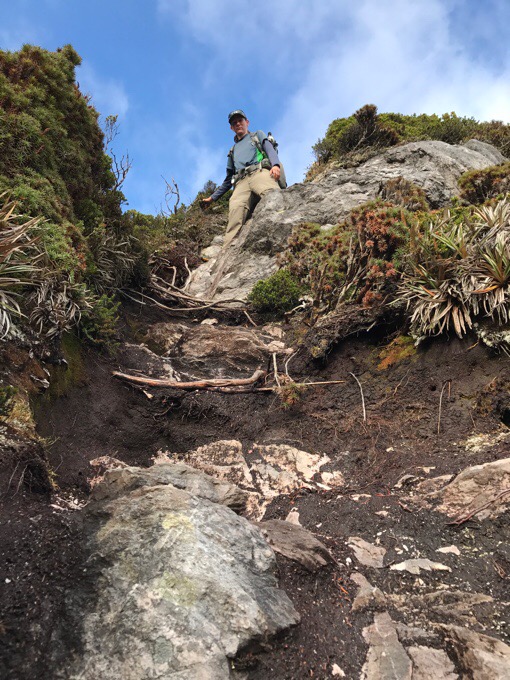 As we approached a significant turnoff, there were cool patches of fog coming across the valley below. The Kappa Moraine Trail is the cutoff to make the traverse shorter if needed. Many end up taking it due to lack of food or energy, or poor weather. We are fortunate to be doing this traverse in half the time most do, and to have a weather window work out, so we passed the cutoff and continued on for another day of exposed ridge walking. 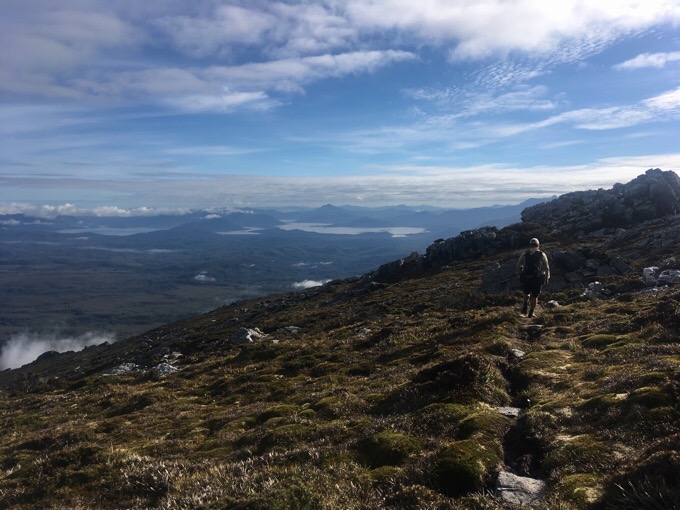 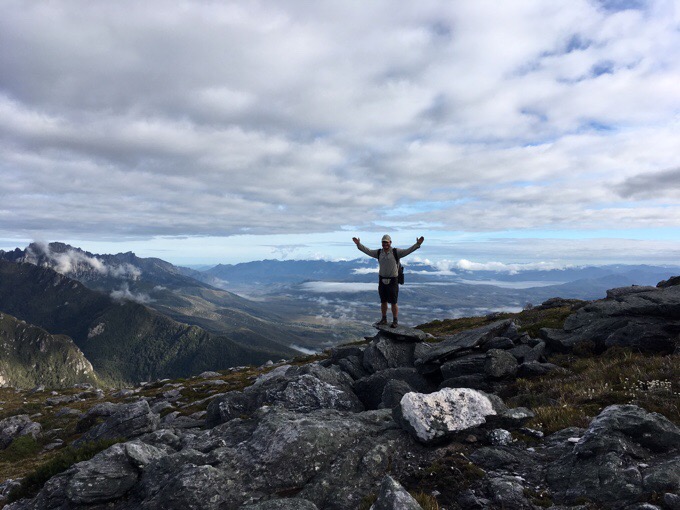 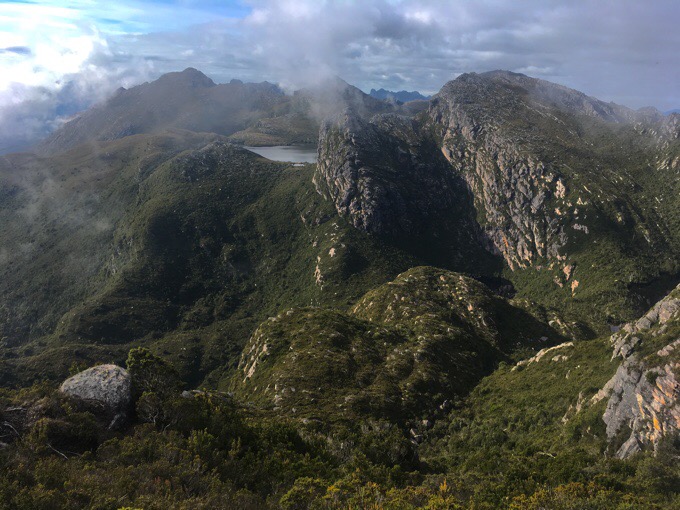 We are headed to the lake barely on the right and up to the one in the center.

We have a guidebook, and use the GPS on our phone (Avenza Maps and Gaia apps), but since this section is far less traveled, we didn’t have a gpx track, and there wasn’t one on the digital maps either. The path got much fainter as we turned off and headed by Lake Vesta and Juno. It wasn’t long before we were on a faint path pushing through a tunnel of rigid brush well over our heads. Our tolerance for this level of brush has gotten quite low, and it is really the only thing I’ve ever seen to annoy Griggs. I don’t know how he does it with shorts on. We had little beta on this half of the traverse, and knew it was less scrambling, and more overgrown. In the back of both our minds was the option to turn around and take the cutoff.

Fortunately, we resisted the temptation, and the high brush cleared in the next hour as we got to Promontory Lake. The scenery reminded me of the Wind River Range in Wyoming with the lakes and open green hills with rocks strewn about. 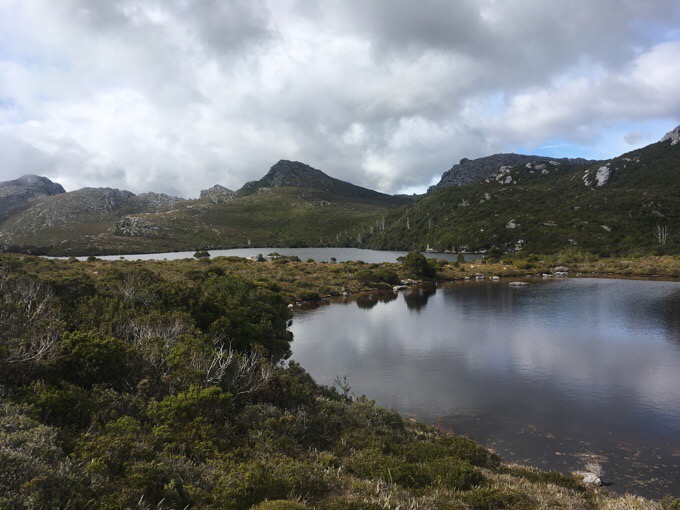 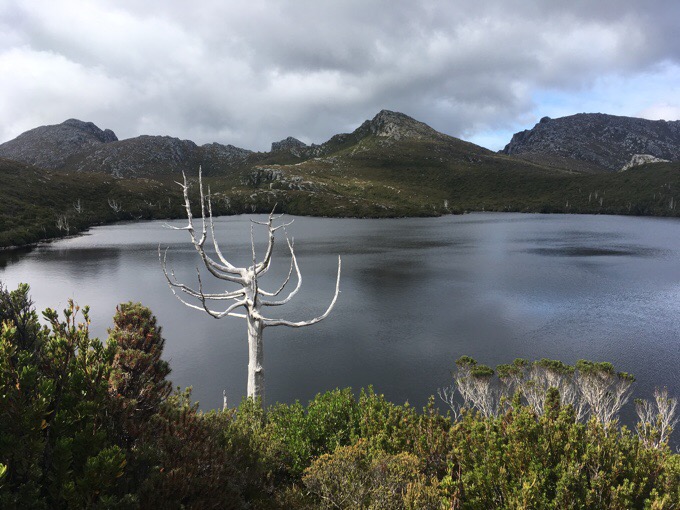 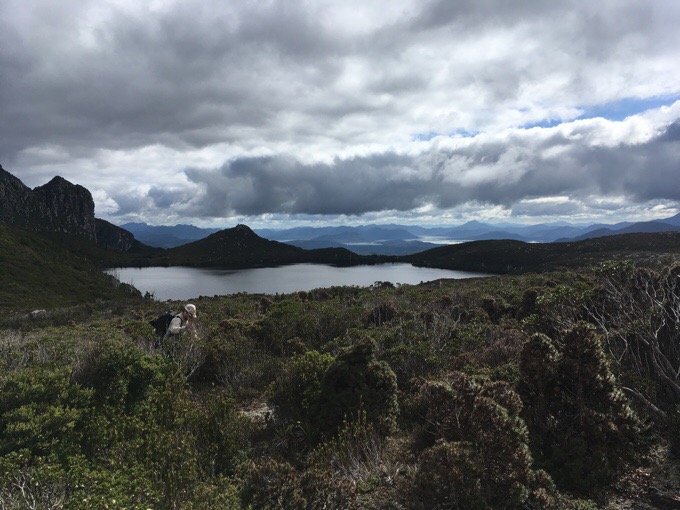 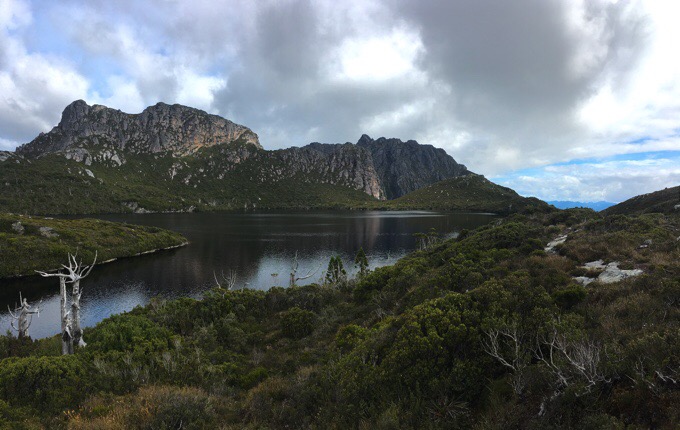 From Promontory Lake, there wasn’t a defined path, so it was cross country through low scrub brush as we head to and over The Phoenix. It was great to stretch our legs again and the views were great. Looking back towards Promontory Lake is one of my favorites of the trip. We could see the range we’ve come through with the lake sitting high on the edge of a drop-off we had climbed up. This is one where photos did not do it justice. 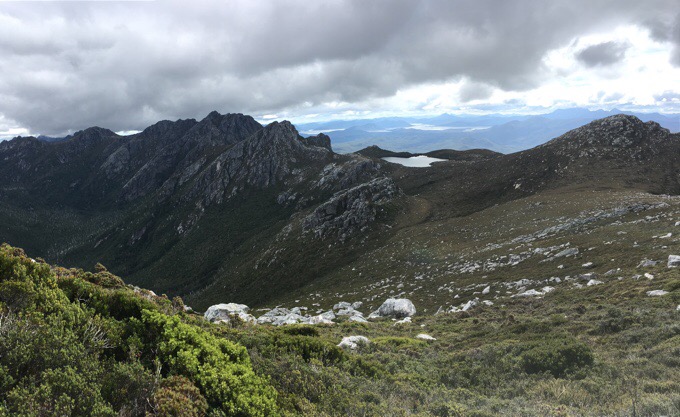 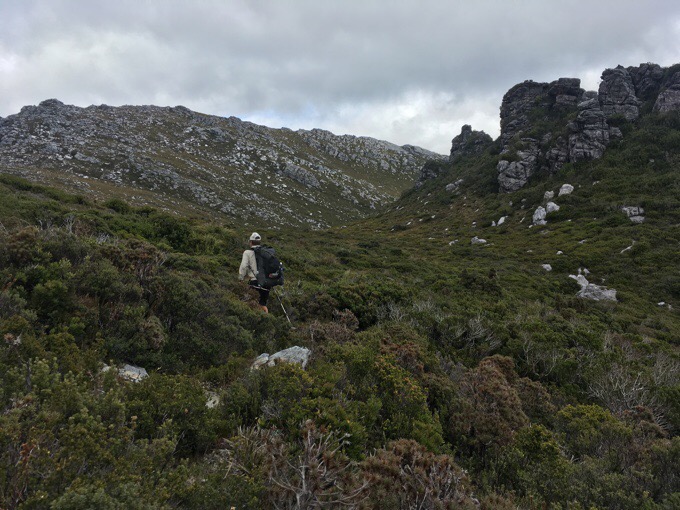 Heading over The Phoenix straight ahead.

Once over The Phoenix, we descended to a saddle, and picked up a light trail. We had lunch there, and I think it was my favorite lunch spot of the whole month we’ve been in Tasmania. We even had phone service, ha! 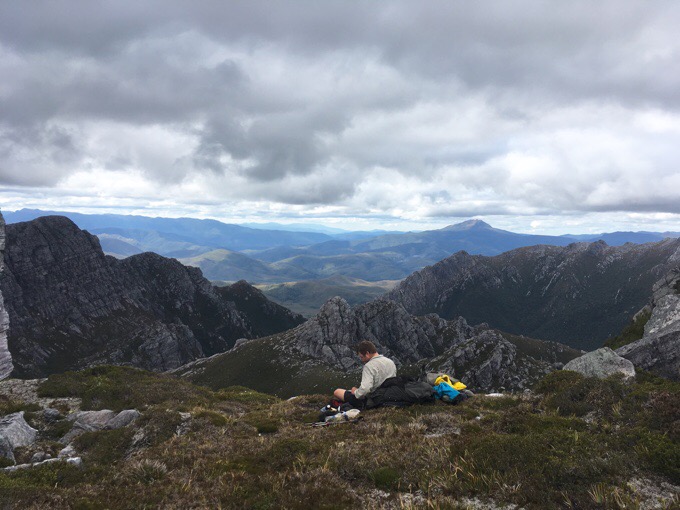 After lunch, the day kinda blurred into one. We followed a faint trail and cairns that went along Centaurus Ridge, along the Crags of Andromeda, and then along Lucifer Ridge. Most of it until about an hour at the end of the day was open and very enjoyable. Yes, this whole traverse really is worth doing in my opinion if you have the clear weather window to make it happen. 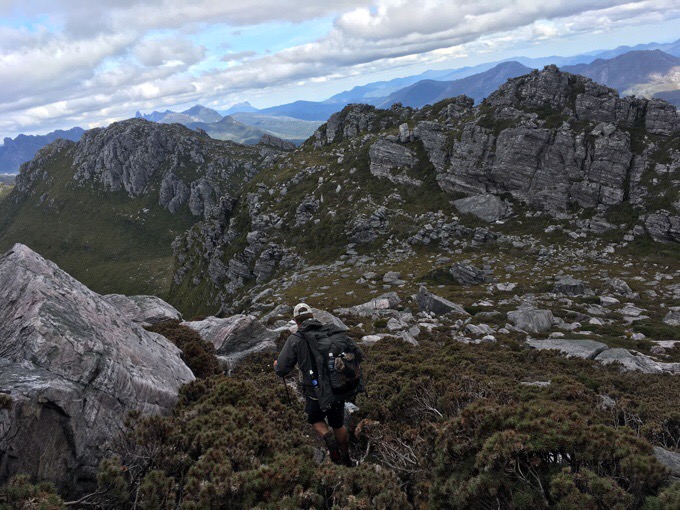 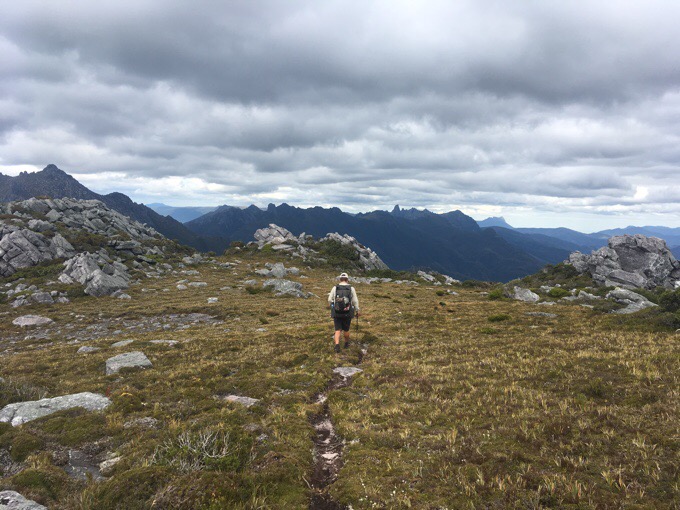 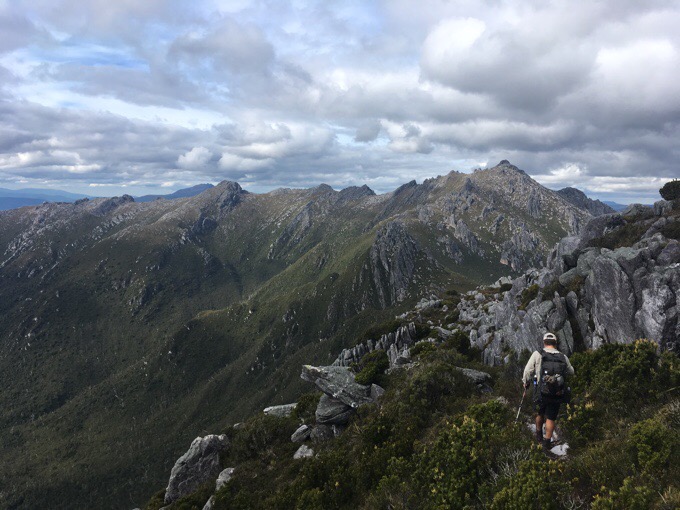 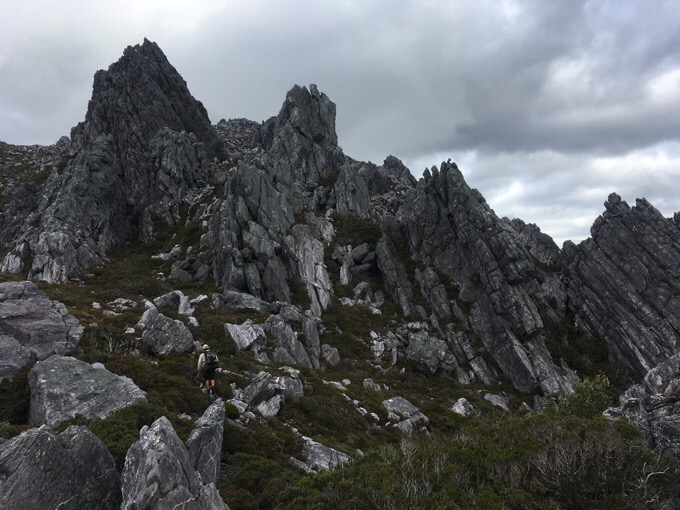 We have time estimates in the John Chapman guidebook we are using, and tend to consistently be at the lowest end of the time estimate or lower, but today was the first time that we were in the upper end of the estimated time. The guidebook is years old, so maybe the path is more overgrown than it used to be. Just a heads up for people gauging time, that this was the one section that took us longer than expected for some reason. We felt like we were moving at a steady pace, but it just took awhile. 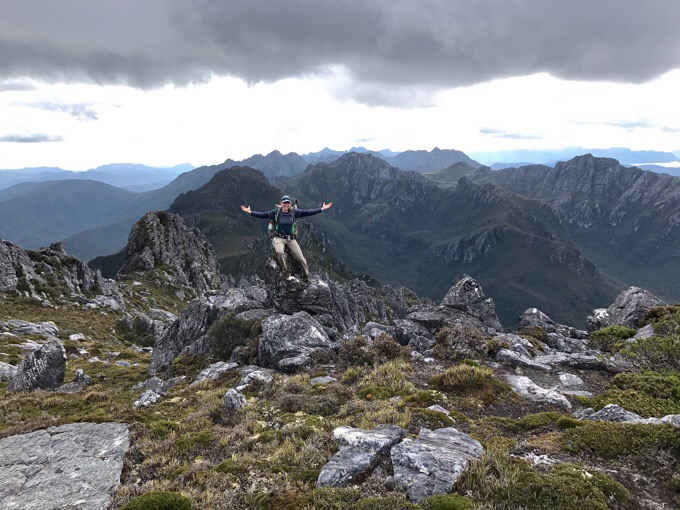 We came over that range behind me! 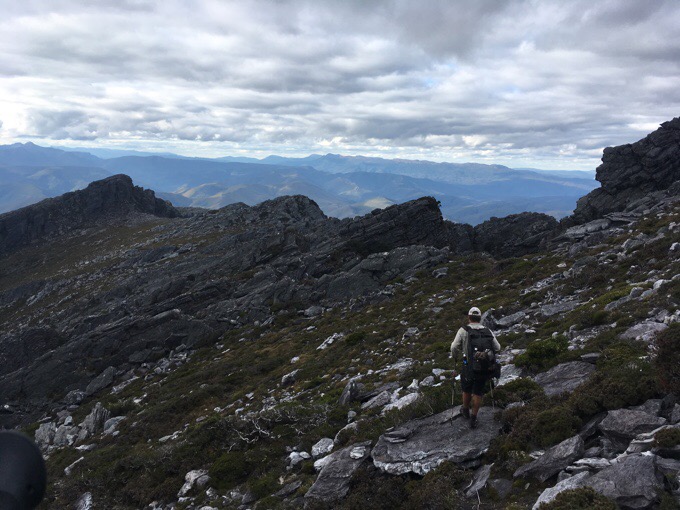 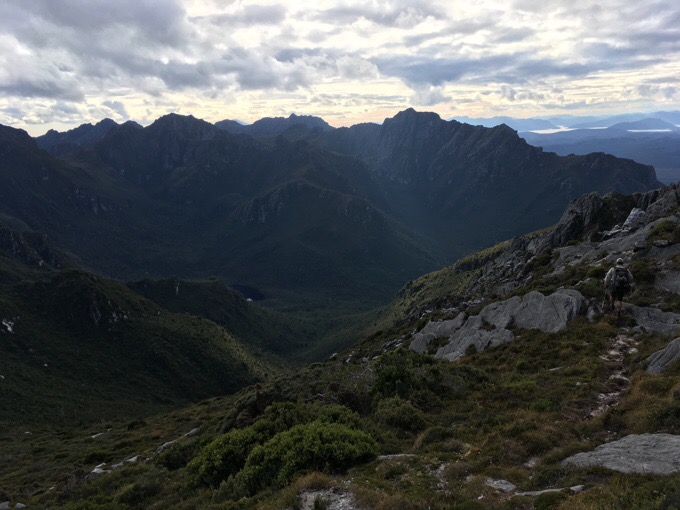 That last hour with the brush was really frustrating. This traverse is tough on gear, and both our packs are torn in places with all the scraping along the rocks and rigid brush. We knew to expect this, and are glad this is at the end of our trip. Nothing a little duct or tenacious tape can’t fix.

We got to Rosanne Lake at 5:45pm. The book describes there being “wet” campsites behind a sandy beach. With all the rain last week, the lake was quite full with water covering the sand, and some of the tent sites were marshy. Fortunately, there were two spots up against a large rock that we each squeezed into. The hope is that there might be less condensation up against the rock. This does win the prize for my least favorite campsite in the last month. Brush and marsh everywhere, no tent pads to be elevated off the spongy ground, and no idea where people go to the bathroom unless they wander into spongy wet marsh with tall wet grass. That will be fun to figure out in the morning. I noticed my legs are covered in quite a lot of bruises. It was too dark to get photos tonight, so I may do it tomorrow night if I think of it. They look like I fell down a flight of stairs with bruises even on my thighs. All the price of admission out here I guess. Speaking of which, Griggs is trying to stretch out his last pair of shoes knowing they’d get a beating out here and not wanting to ruin a new pair. His shoes look more like sandals at this point. It’s all worth it though. Both of us agree that it’s possibly our favorite trip out here as it felt most like an adventure. A possibly brushy marshy hike out tomorrow might change that, but hopefully not. This one was definitely worth doing for those that like the more rugged stuff. 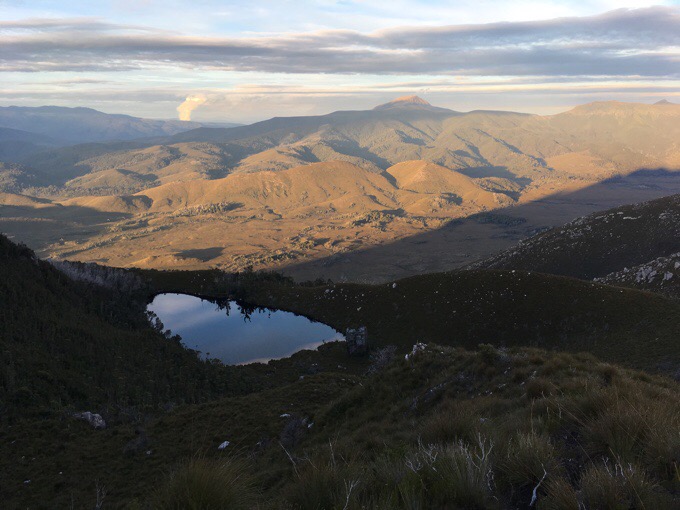 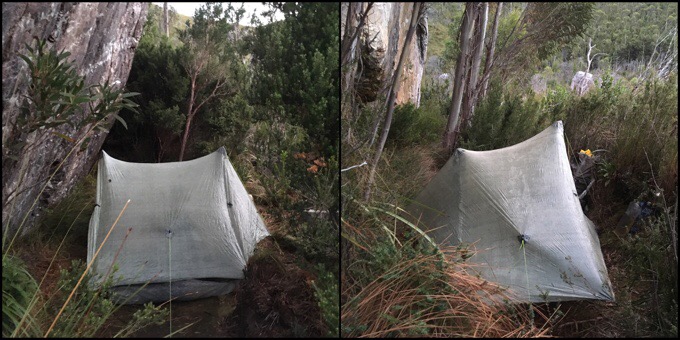 I fell asleep quite early around 8:30pm, and woke up at 1am, now journaling. Shockingly, this is our driest and warmest night yet. My tent is dryer than it was when I pitched it. It’s so silent outside that I’d swear I was home in bed. Off to sleep for a few more hours.