Day 30: Down & Out Over The Arthur Plains

Shockingly, we awoke to dry tents for the first time since starting the Arthurs. Well, we didn’t have any condensation. Both our tents were wet on the bottom from the spongy saturated ground, but that’s the driest it’s been in four nights. It turns out that Griggs got a small hole in the bottom corner of his water bottle that leaked in his tent. With all the scraping along brush and rocks, his pack has holes in the corner of the side pockets where the water bottles are. He lost one water bottle in the brush yesterday that either fell right through the hole in his pack or got snagged in that terrible rigid stuff we pushed through at the end of the day. Fortunately, he had multiple bottles. The same thing happened to me doing the high routes in the US when I started this string of hiking nine months ago, but it was my umbrella that somehow fell through a hole I unknowingly had after a couple months of scraping the same corner on rocks.

We started out just after 7am with our warmest morning yet. Of all the days for it to be warm on this traverse, I was glad it was today. The whole day was at low elevation in the Arthur Plains with tall buttongrass, mud, brush, and standing water. Cold wet brush and standing water could have made today extremely uncomfortable. We luckily got pretty dry brush and the wet feet were a comfortable temperature with it in the 70sF/21C today. We started out with a short climb up from the lake before dipping down and across Arthur Plains. The view overlooking the valley was grand with fog settled down in it. 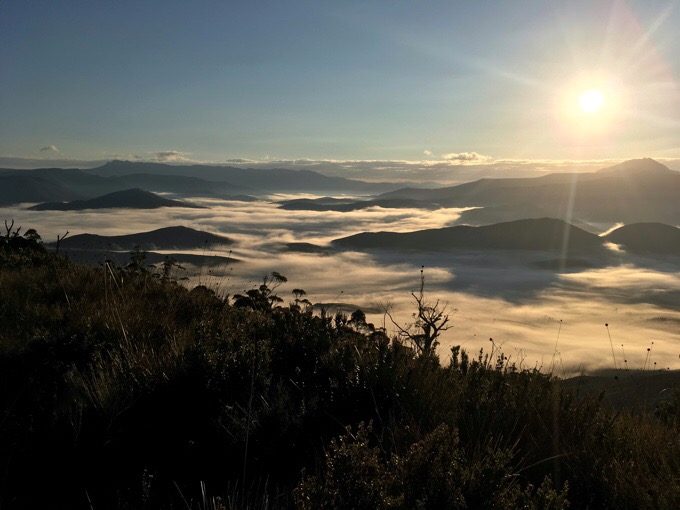 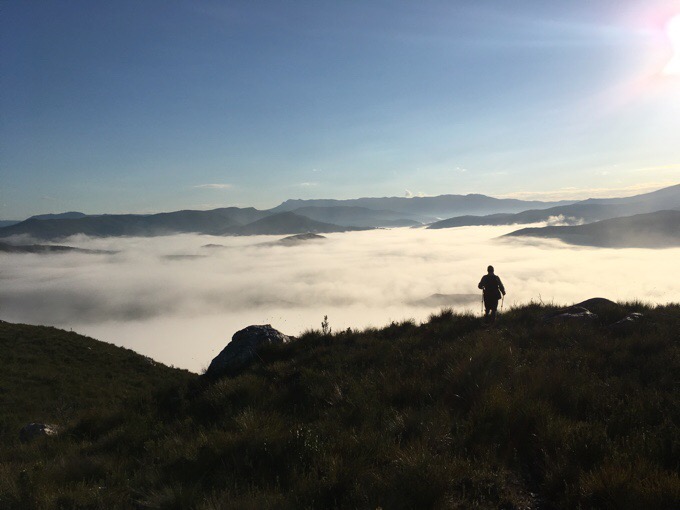 As we hiked down into the fog, and across the plains, the fog slowly lifted. It really added some unique scenery to the morning. There were so many wet spiderwebs in the grass that shined as the sun broke through the fog. Made for some uniquely cool photos. 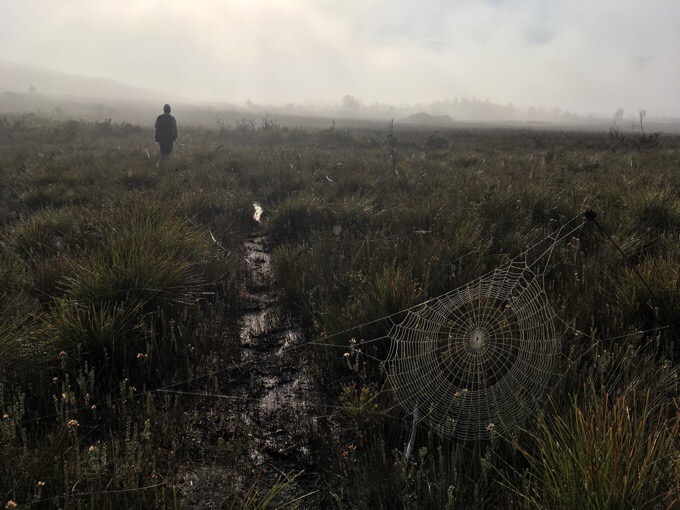 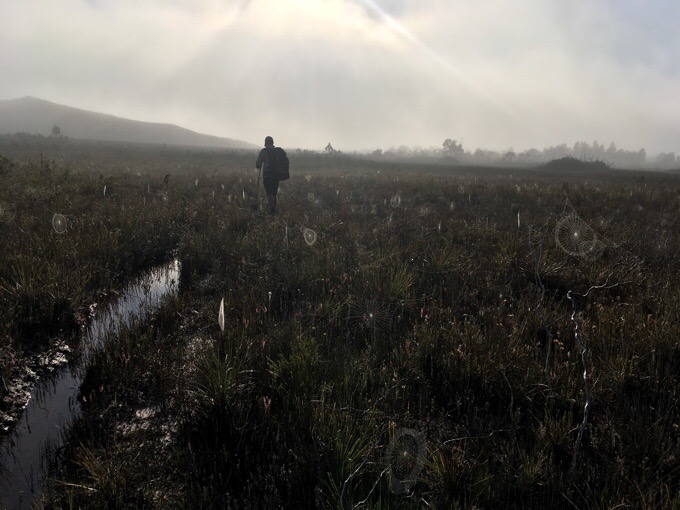 The track we were on got thinner as we got further into the plains and the brush got more dense to push through at times. Thankfully, with the lifted fog, we could see across the plains and set a point on the hillside to hike towards that kept us on a direct path to intersect with the Eastern Arthurs trail. We have chosen not to do the Eastern Arthurs this trip hearing that the Western Arthurs were the main event out here. This brush and rock scrambling stuff is different and rewarding in its own way, but can get pretty taxing all at once. We knew we’d be satisfied with just the Western Arthurs this time around. It was grand, and filled our need for this type of hiking. 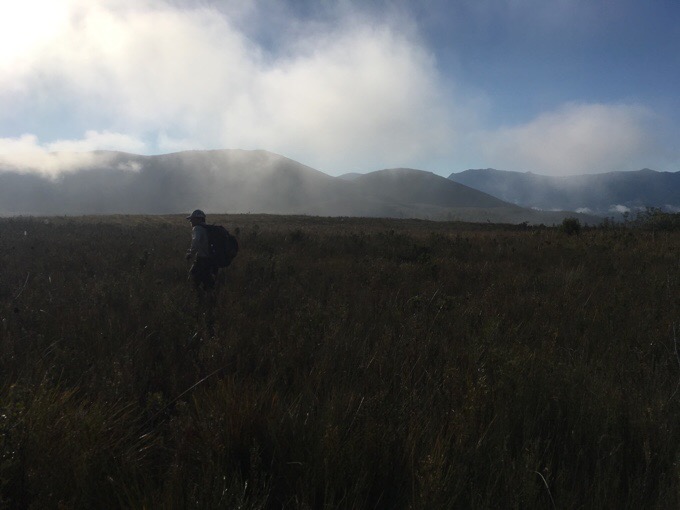 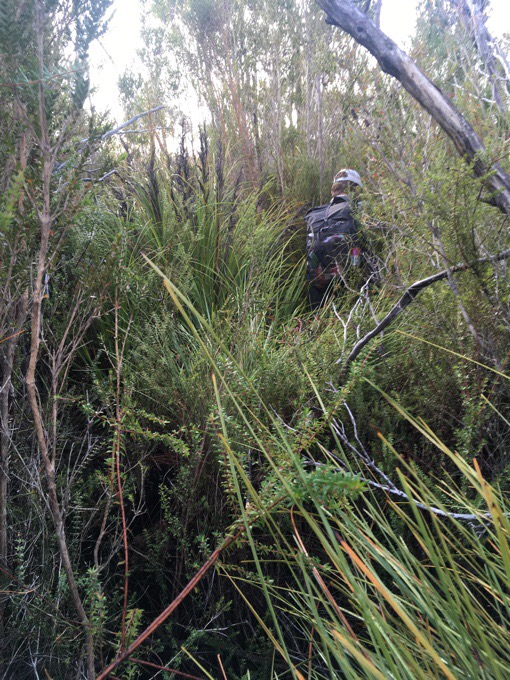 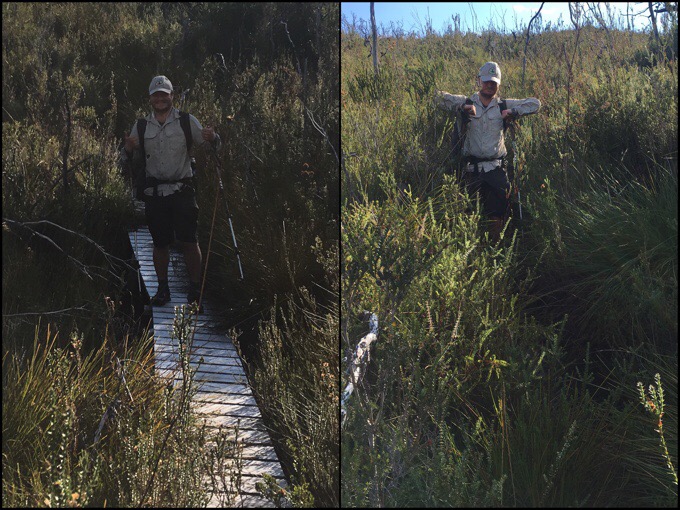 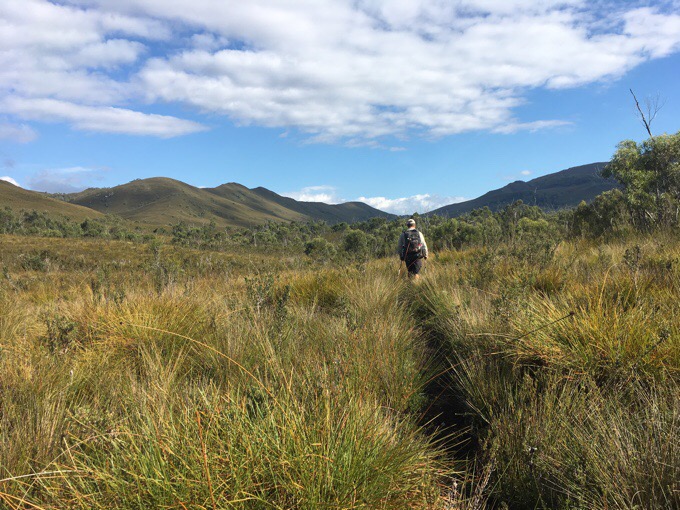 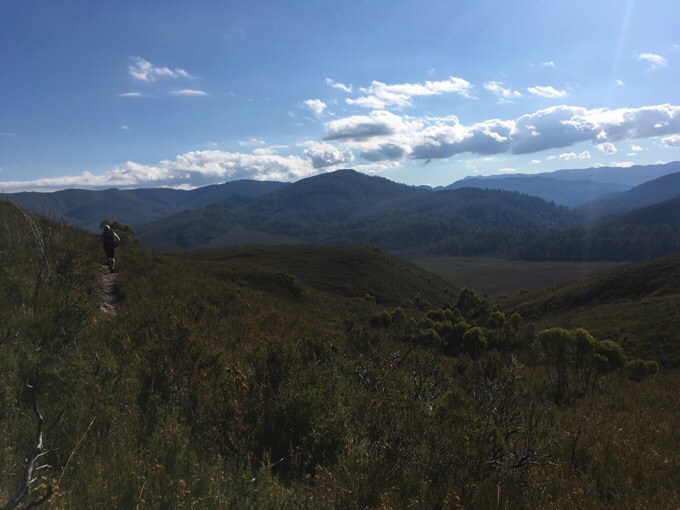 Once on McKays Track, we went up over a ridge to then be paralleling the whole range we had come across as we will eventually circle around towards the carpark. We finally got to cruise along a well defined path and take in the view. To think that in a few hours we were cruising along the distance parallel to what took us over two days to hike through in those mountains. 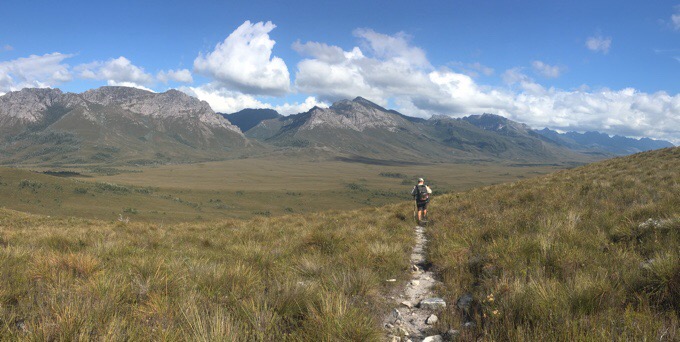 We had lunch at a nice camping area where the trail connects to the McKay Track. While at lunch, we looked at our timing for today. There was a chance we could have made it back to the car today, but it would have meant hiking in the dark the last half hour since it gets dark at 6:30pm now. We have no reason to push, and accepted that we’d end a bit early today at the last campsite before the parking rather than pushing late. We also discussed the final trip on our list, Mt Anne. It is just down the road from where we are currently parked, and there are options to do an overnight circuit that seems similar to what we just did the last few days here. It would involve a lot of slow tough hiking with lots of brush, mud, and scrambling again. 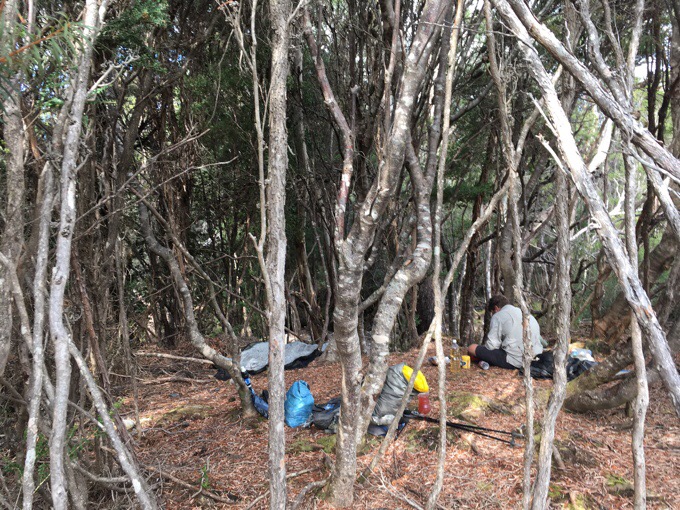 Although the Arthurs are quite scenic, we both do not feel a great desire to do the Mt Anne circuit. We decided doing a day hike there tomorrow would be more enjoyable. We just don’t feel a need to wear ourselves out, and have frankly hit our tolerance level with this really thick brush. It just isn’t fun. Both of us were willing to go through with it for the other one if either of us really wanted to do it, but thankfully, neither of us are up to it after what we’ve just done. Had weather been different this trip, and we were able to mix it up with a break from this sort of thing for a bit and then return, we might have been more motivated, but right now, we’ve had enough. 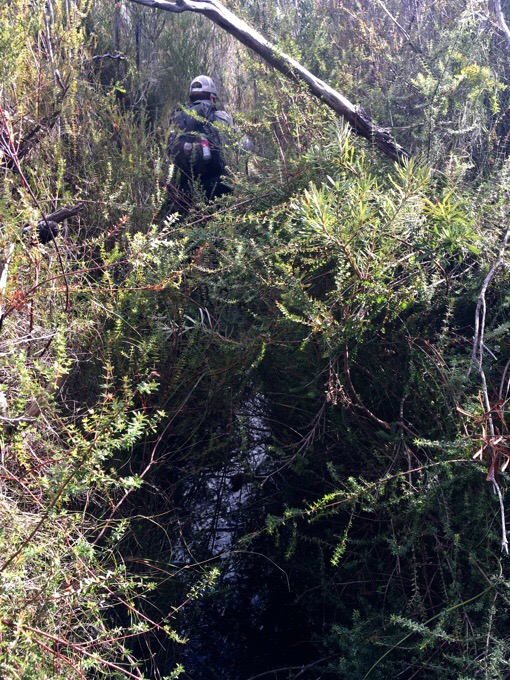 I mentioned last night that my legs looked like I’d fallen down a flight of stairs from all the bruises (mostly from pushing through really rigid brush) and I took photos tonight to get a visual of how rough it was. It is apparent that I push forward with my left side to shield my right ankle that is weaker and had major surgery a decade ago. The majority of the bruising is on that side. 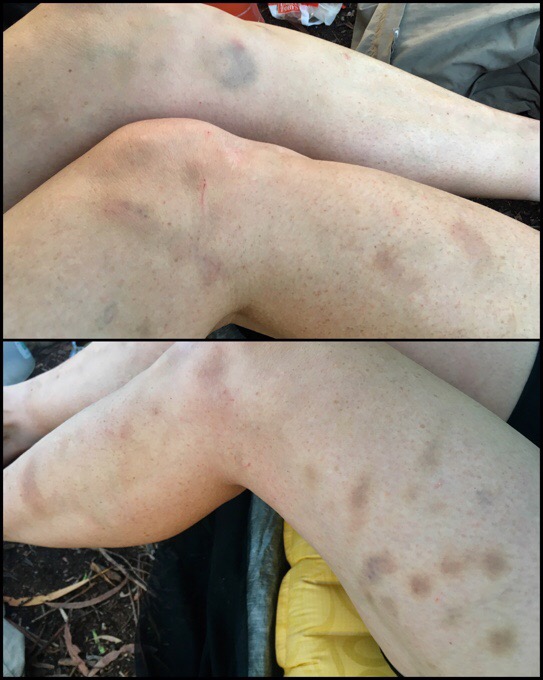 The remainder of today, we hiked in low buttongrass with a defined track and periods of thicker brush or mud to negotiate. The day was relaxing compared to the last few, and I was grateful for it having started my period and feeling like a total zombie. When we discussed not doing Mt Anne, Griggs wanted to make sure I wouldn’t feel like I was missing out on something. I let him know that in the condition I’m in now, he could propose laying down in a hostel for the remaining four days before our flight, and I’d welcome it, ha! The good thing is that I got to take Naproxin for my cramps and it made all other aches and pains disappear while dulling the cramps. That’s why I waited to take anything the other day. I knew I’d be taking something for cramps soon and didn’t want to take too much. I know it will pass, but I was quite lethargic today and was happy to just need to put one foot in front of the other and zone out. It was monotonous, and the day felt long, but it was relaxing. 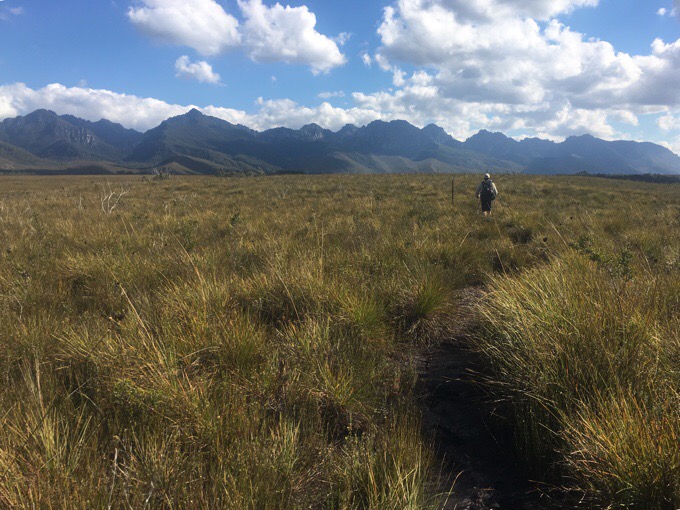 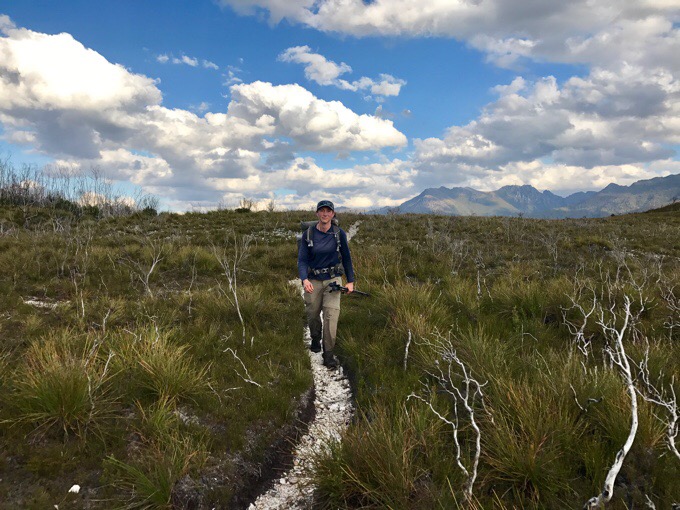 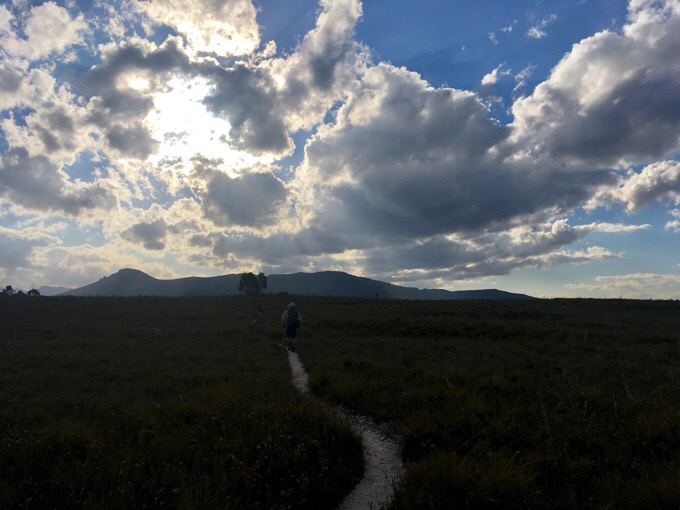 We finished at 4:30pm, about two hours from the camping at the carpark, and I was totally content to finish earlier than usual today. We camped at Junction Creek, and were happy to be able to rinse off with the warmer day making it more welcoming. When I pulled up my pant leg, I noticed I had a leech by my ankle, ugh. It was quite fat, and had obviously been there awhile. I flicked it off, and it didn’t bleed too much. 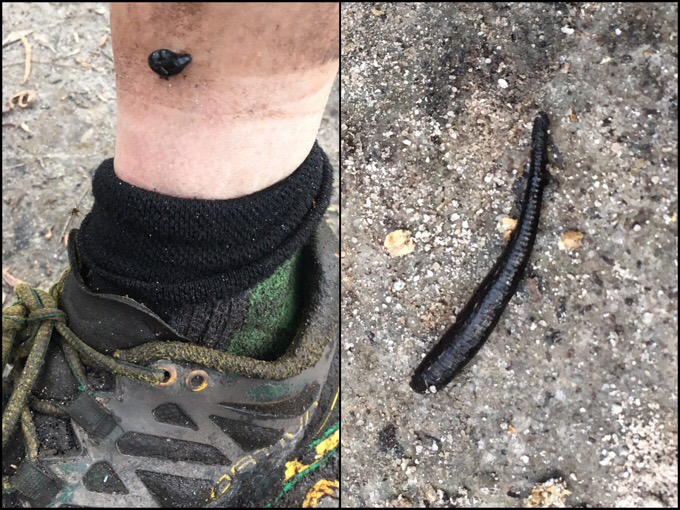 I was drained and fell asleep before 8pm. I was so out of it that I forgot to get a tent photo. I woke just after 10pm and wrote and sewed up a hole in the toe of my shoe before heading back to sleep around midnight. I’m a tired camper.